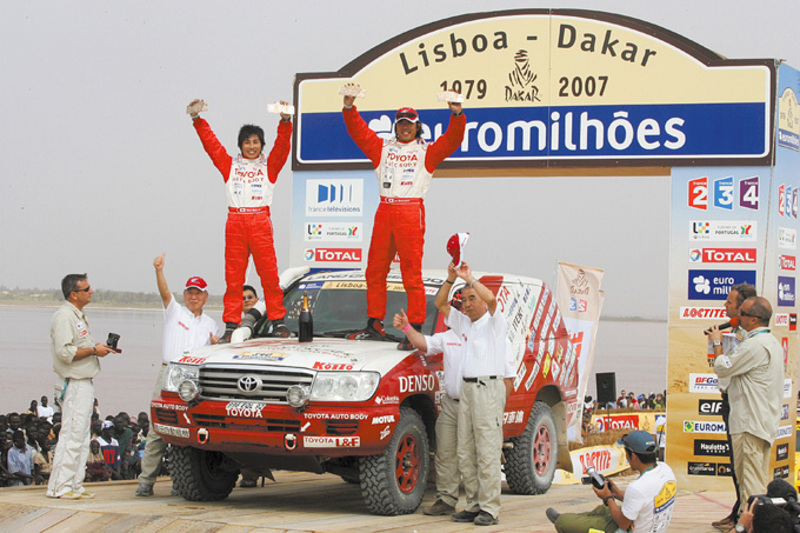 Mitsubishi may have won the overall car category, but Toyota has dominated the 2007 Dakar Rally production class, taking seven of the top 10 positions including the top three in the T2 category for mass-produced all-terrain vehicles.

Jun Mitsuhashi won the T2 category at the wheel of a LandCruiser HJD 100, finishing nearly two and a half hours ahead of nearest rival, Ronan Chabot, who piloted another LandCruiser. LandCruisers also filled third, fourth, sixth, ninth and 10th positions in the T2 class. The 15-day 2007 Dakar Rally commenced in Lisbon, and covered 4309km over 14 special stages and 3600km in transport sections for a total distance of just under 8000km. Toyota previously won the Dakar diesel production class in 1999, 2000, 2001, 2002 and 2005. The latest results again confirm Toyota LandCruiser's superior reliability and durability in the world's toughest off-road test.

The Toyota LandCruiser first came to prominence in Australia from 1959 during the construction of the Snowy Mountains Hydro Electric Scheme. Sir Leslie Thiess of Thiess Contractors secured the Australian franchise for Toyota and introduced 13 LandCruisers to the Snowy fleet, beginning a long tradition for Toyota in Australia. Toyota engineers visited the Snowy region several times to test parts in their quest to make the LandCruiser durable in all manner of conditions. An all-new Toyota LandCruiser will be launched later in 2007.