Land Rover is expanding the new Defender family, with a ‘Defender 130’ set to join the existing Defender 90 and Defender 110 this August.

With seating for up to eight people in a 2+3+3 configuration, the Defender 130 features a body that’s extended by 340mm over the 110 to 5358mm, allowing a roomier third row of seating.

For the sake of comparison, that overall length makes the Defender 130 a substantial 378mm longer than LandCruiser 300 Series and is even longer than the Jeep Grand Cherokee L seven-seater.

While the Defender 110 already has a third-row seat option, that’s best suited for children, with Land Rover claiming there’s comfortable seating for three adults in the third row of the longer Defender 130. 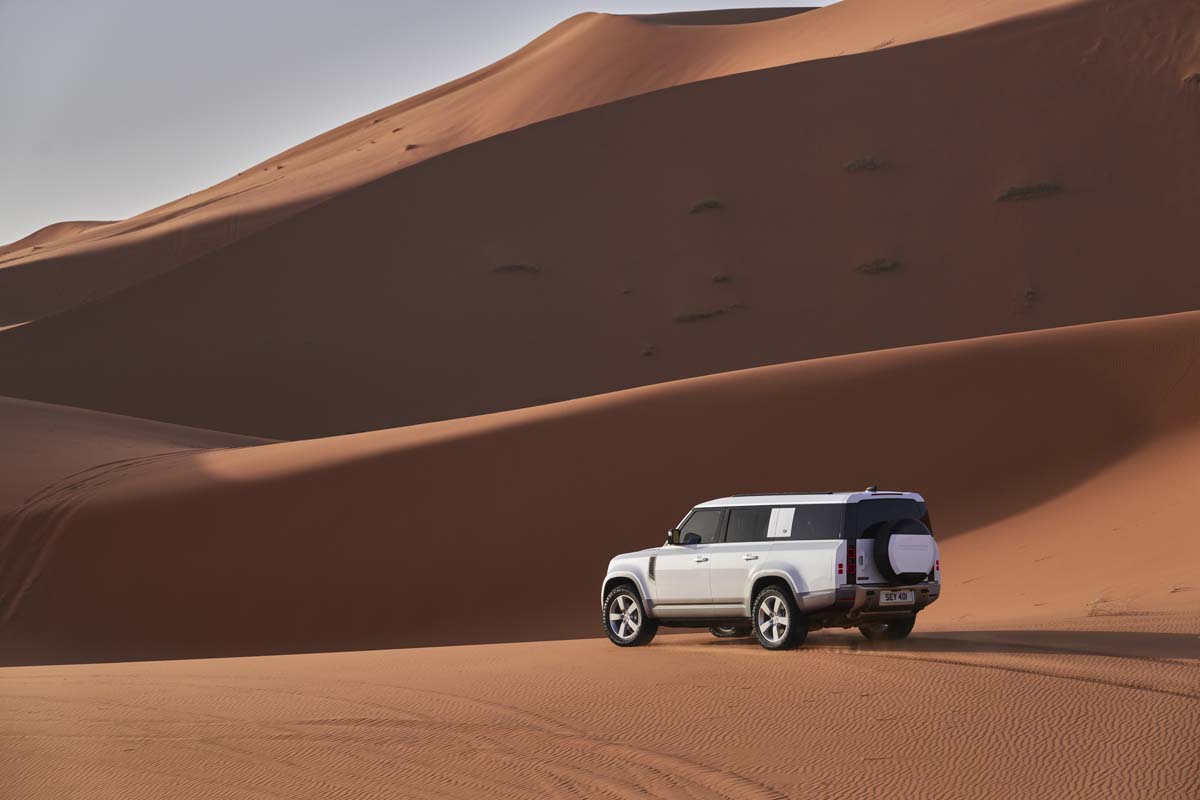 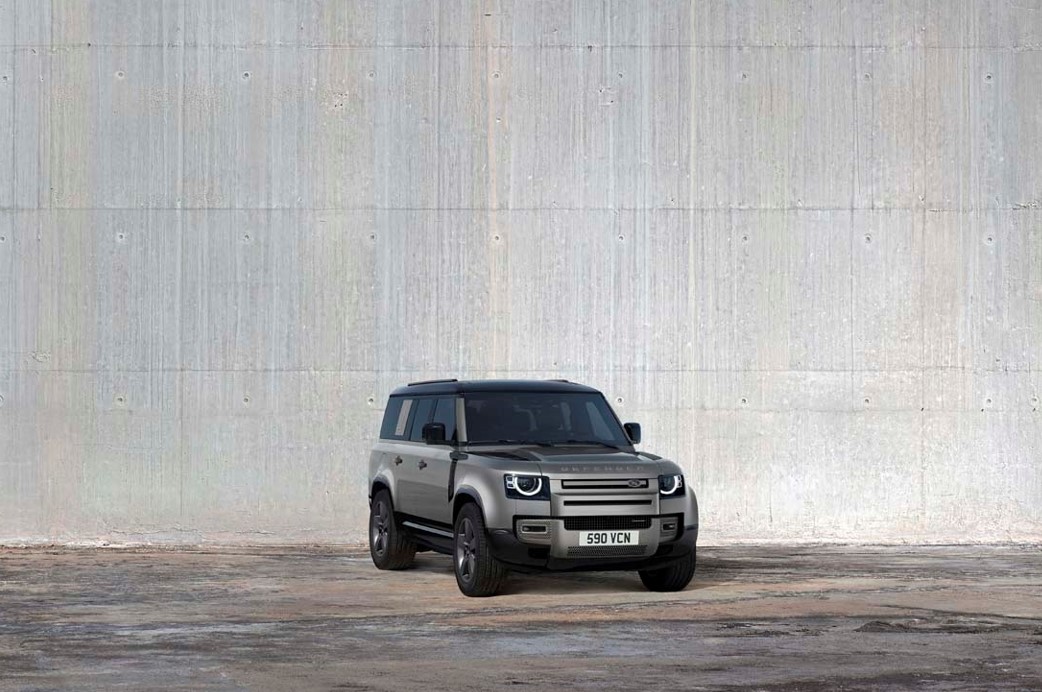 Longer body aside, the Defender 130 retains all the signature styling cues of the existing model variants, like the grille and headlight treatment, C-pillar blanking section and tail light treatment, but the back has a more bluff, boxy look that’s at odds with the sculpted front end.

Land Rover describe the rear end as having a boat tail-style uplift, aimed at minimising impact on departure angle, but at 28.5 degrees, it’s significantly poorer than the 40 degrees on the Defender 110. 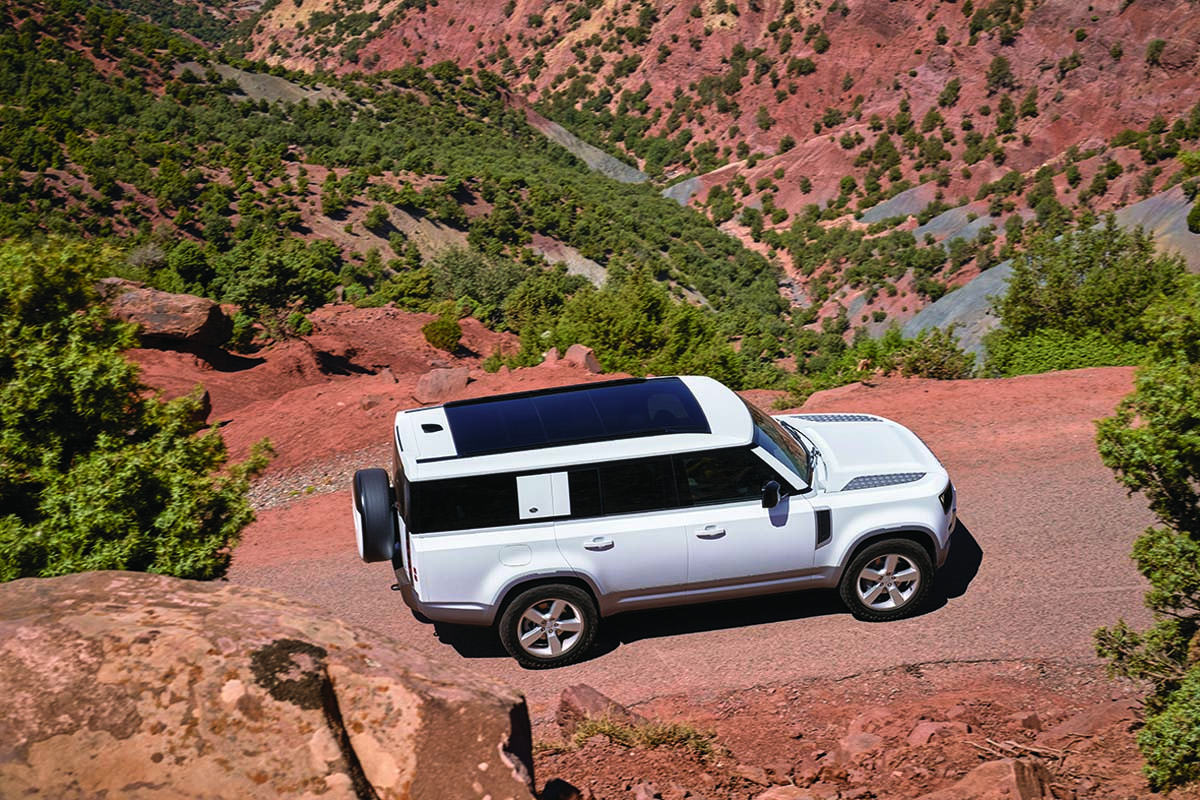 A panoramic sunroof is standard, and while it looks like a single unit, it’s made up of two sections, the latter of which is above the third-row seats.

Multiple colour options offered from launch will include a new Sedona Red shade, while the Explorer, Adventure, Country and Urban cosmetic packs from the existing Defender range will all be available. 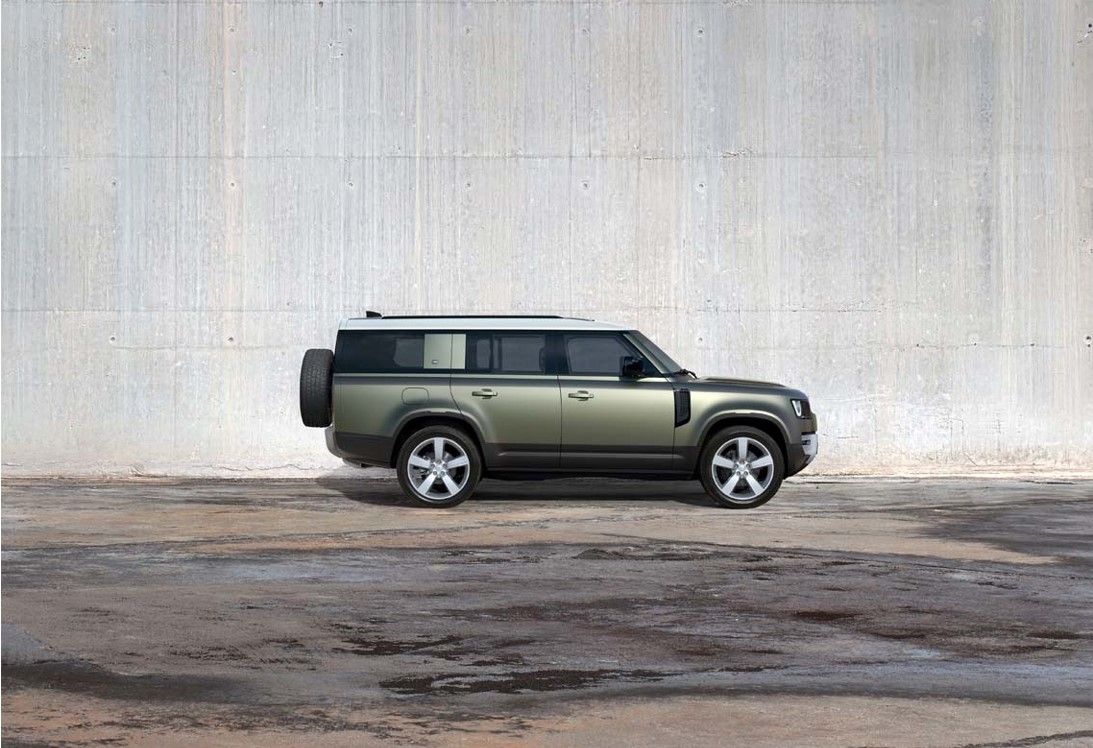 The longer body of the Defender 130 has led to the introduction of an Extended Bright Pack option, which as the name suggests, broadens what the existing Bright Pack offers. Ceres Silver satin is applied to all lower body panels, including the wheelarch trims and lower bumpers, as part of this package, but is limited to selected paint options. These complement the existing front and rear skid plates in Noble Chrome, as well as the 20-inch Luna alloys in Bright Silver.

Ceres Silver satin is also used for the front guard vents and checkerplate-style bonnet louvres, regardless of whether the Extended Bright pack is selected or not. 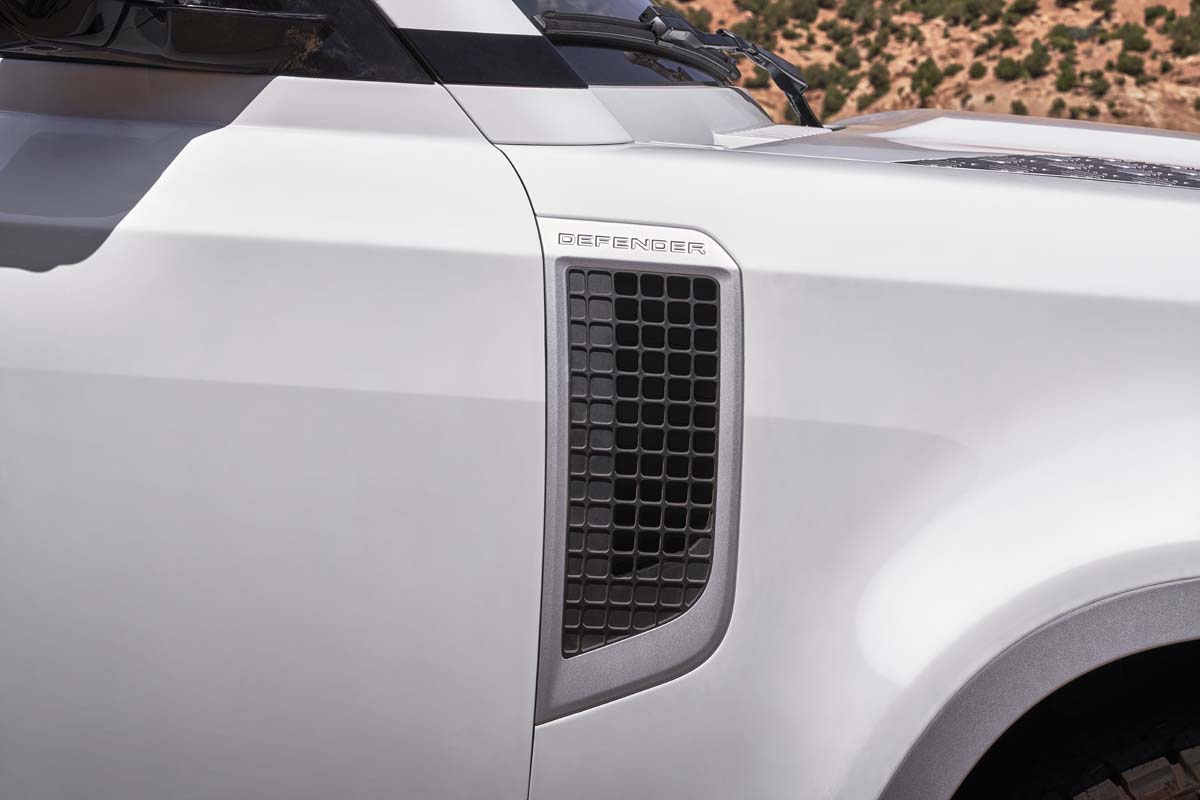 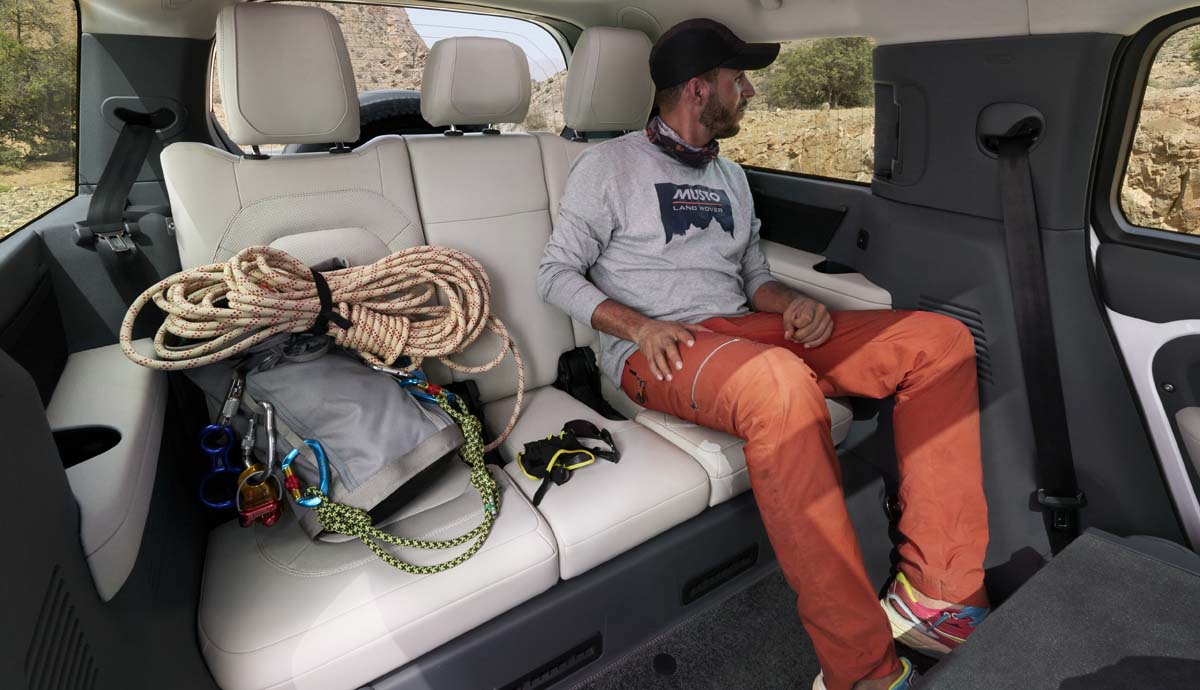 Land Rover says all the interior packaging components are mounted as close to the underlying structure as possible in order to maximise interior space, including headroom, which is described as generous for adults, despite the raised “stadium seating” for the second- and third-row.

In-cabin heating/ventilation extends to the third row, part of a four-zone climate control system that’s exclusive to the Defender 130. Seat heating, USB ports and padded armrests for the third-row are all optional.

Access to the third-row seats is via sliding and folding second-row seats. Behind the third-row, luggage space is listed at 389 litres, with easier loading thanks to buttons inside the rear that allows the Defender 130’s standard air suspension to be lowered. The single-sided tailgate with an external spare wheel mount is standard, with a hard cover for this spare optional.

Fold the third-row seats and luggage space increases to 1,232 litres, then to 2,291 litres with the second-row folded. An optional five-seat version of the Defender 130 offers up to 2,561 litres of luggage space.

For the front seat occupants, the 11.4-inch Pivi Pro touchscreen infotainment system recently added to the Defender 90 and 110 V8 is standard, offering what’s said to be enhanced control over the 4x4’s core functions via a crisp and intuitive display.

The system is SOTA capable and can be personalised to the driver’s taste, including prioritising frequently used information. It’s also intelligent enough to learn travel patterns and offer navigation suggestions at the beginning of a commute.

That navigation is integrated with the ‘what3words’ global platform that allows instructions to be inputted directly through Pivi Pro or via a connected app.

A new feature is Cabin Air Purification Plus, which combines nanoe X technology for allergen reduction and pathogen removal with CO2 Management and PM2.5 Cabin Air Filtration to improve the interior environment by monitoring interior and exterior air and adjusting the in-cabin air accordingly. 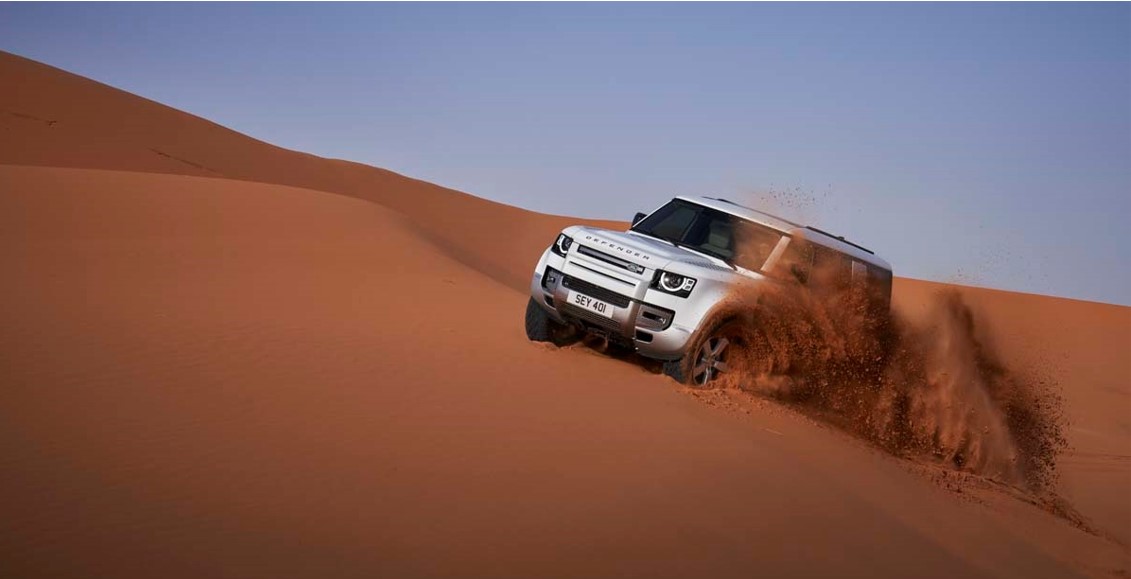 Both engines are paired with an eight-speed automatic transmission and Land Rover’s Intelligent All Wheel Drive (iAWD) system.

The electronic air suspension allows up to 430mm of articulation, with 71.5mm of additional lift available at the front (73.5mm at the rear) to clear obstacles. 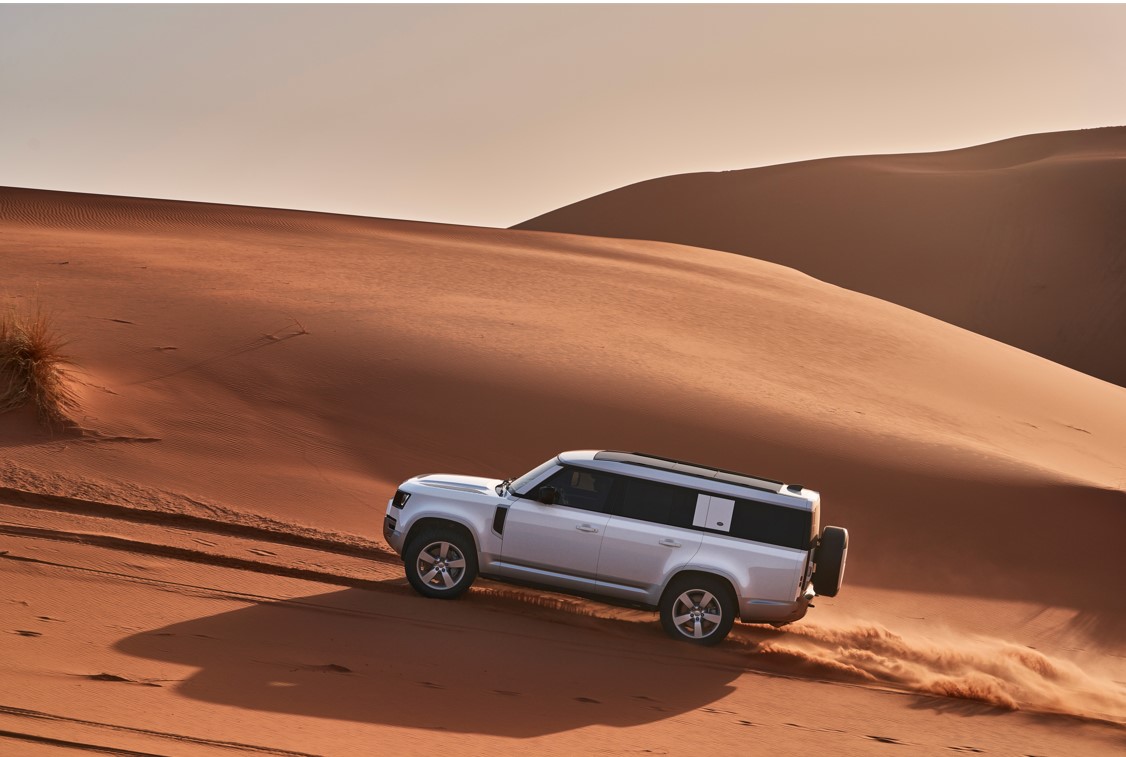 Maximum fording depth is listed at 900mm, with approach/departure/breakover angles of 27.5, 28.5 and 27.8 degrees, respectively.

Ground clearance is 290mm at the electronic air suspension’s lowest setting, while towing capacity is 3,000kg and max payload is 750kg. 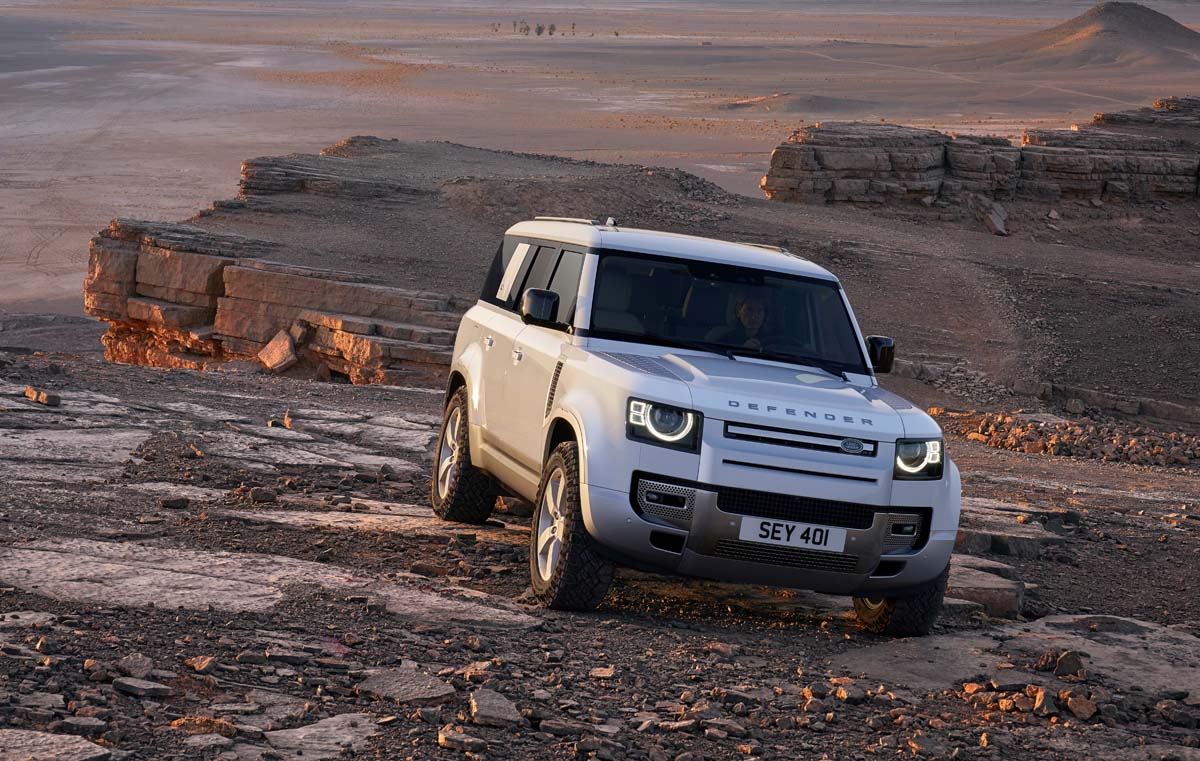 Local orders for the new Defender 130 open from 1 August, 2022, with an SE trim level as standard and the aforementioned two engine options.

To order and for more details, see your Land Rover dealer.