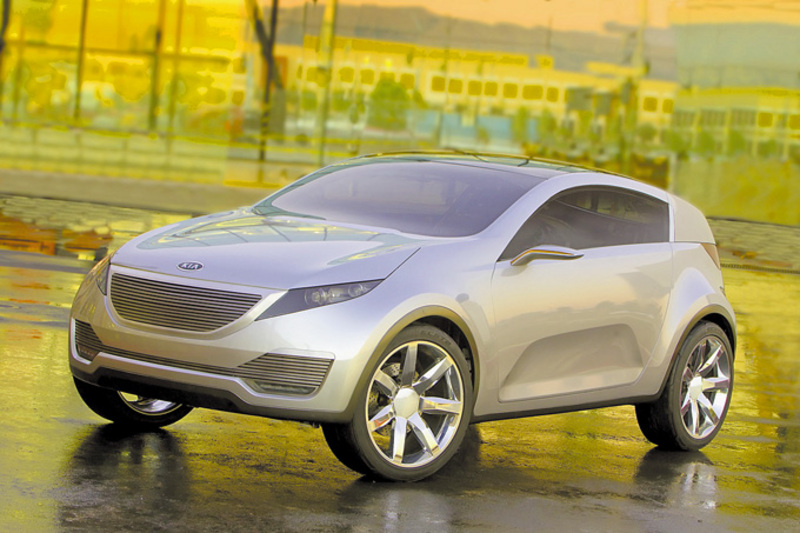 Fitted with a supercharged 4.6-litre DOHC V8 that delivers 400-horsepower and twists out 400 lb-ft of torque, Kue is a true performance vehicle. Helping the driver harness all that power is a full-time all-wheel drive system yielding predictable driving characteristics both on- and off-road. The Kia Kue has a monocoque platform that sits on 22-inch tyres with a wheelbase of more than 2900mm, packaged in an overall length of 4724mm.

Though purely a concept, the Kia Kue does hint at future styling directions for Kia Motors. "Good design shouldn't look like you are trying too hard," said Tom Kearns, KMA chief designer. "The future Kia direction will incorporate the 'less is more' philosophy but still include a heavy dose of boldness and distinctiveness." With its four wheels pushed to the corners and exterior skin tautly stretched over its underpinnings, the Kue appears powerful and poised. Muscular wheel flares contrast with crisp bevelled sections found elsewhere on the body. Swept back headlights combine with the front grille to create a clean, aggressive down-road appearance.

The side window shape flows effortlessly into the rear backlight where two centreline hinging doors open to access rear storage. Single side doors open scissor-style for easy ingress and egress. On the inside Kue continues the clean, athletic theme with bold understated simplicity. With a four passenger seating arrangement and custom built bucket seats, Kue is a vehicle both driver and passengers can enjoy. A technology driven interface designed to adjust to driver and passenger preference is the focus of the interior functionality. Touch pad and motion-sensing controls are used to adjust things like audio and climate, and the entire system is programmable so that one surface may activate the stereo for one driver and temperature for another. Rear passengers have their own, separate interface. While possessing SUV characteristics and capabilities, the Kia Kue focuses more on giving the driver an exhilarating driving experience.