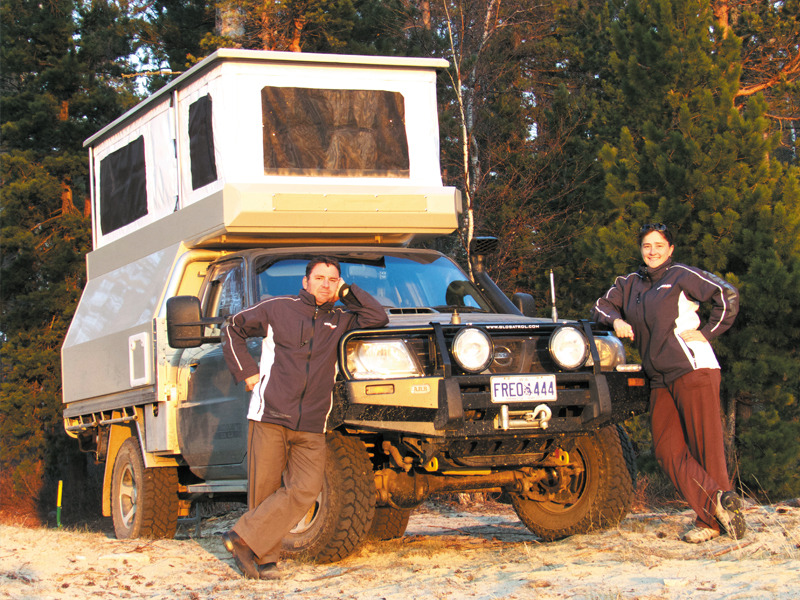 Justin and Jen are both seasoned travellers, with past trips taking in Europe, the US, China, India, the Himalayas and northern Africa.
Have your 4x4 trips taken you through your home state? Maybe interstate, or even around Australia? Compared to Justin and Jen Lewis, you're just not having a fair dinkum go! The intrepid West Australians are currently taking their customised Nissan Patrol coil cab on a multi-year adventure through Russia, Europe, Africa, and maybe even beyond!

Justin and Jen are both seasoned travellers, with past trips taking in Europe, the US, China, India, the Himalayas and northern Africa. However, compared to all their previous trips, this latest venture is on a whole new scale.

"The idea to travel overland first surfaced in 2003 and never really left our thoughts," Justin explained on the Globatrol (www.globatrol.com) blog. The idea didn't really gain legs until 2011, though, when Justin and Jen decided to put a date on the dream and work towards making it a reality.

A trip of this scale (Justin estimates 2 years) obviously requires a lot more planning, not least of which is getting the vehicle and camper set up for tens of thousands of miles of on and off-road travel.


Base Camp
The vehicle for Justin and Jen's adventure is a 2006 model Nissan GU Patrol TD42Ti coil cab ute.

"We are not strangers to travelling in our 4x4. It's almost like backpacking, but with a bigger backpack," Justin said. "[But] we don't want to take too much gear with us because space in the car is very limited and we don't want the extra weight."

While there have been a number of mods made to the suspension, electrics and the like, Justin and Jen have cleverly kept the mechanical specs of the Patrol largely stock. With a combined capacity of 175 litres from the Patrol's twin fuel tanks, a range of around 1,000 kilometres is estimated between fills.

"A factory standard vehicle provides one of the most reliable platforms for any long distance touring," Justin explained. "After all it's a long and expensive trip home. Standard vehicle parts are generally going to be available and that could save a lot of time and distress."

The GU Patrol has been around since 1998, and the DX Coil Cab since 2003. While Australia accounted for the majority of cab chassis models like the Lewis's, there's enough mechanical commonality between these and the Patrol wagons to ensure that, should they need them, parts should be available.

Considering some of the areas they'll be going through (and have travelled through already), aftermarket bits are likely to be thin on the ground, so it makes sense to stick with the factory parts.

To ensure they keep going, the husband and wife team are travelling with their own long distance toolkit, comprising bearings, belts, hoses, an abundance of fuel filters, fuses and electrical parts, fluids, as well as a full complement of tools, including power tools to jury rig parts and make repairs as required.

For the trip, a dual battery set-up has been added to separate the vehicle and camper electrics. A separate pair of 105 a/h deep cycle batteries for the camper come with their own DC to DC charger, while a trio of solar panels, giving a total of 240 watts, are mounted to the roof.

Suspension upgrades include King Springs all round, with a mild lift, mated to OME shocks and dampeners. A Safari snorkel and breather extensions will make water crossings less of a hazard, while an ARB air pump will come into play to adjust pressures on the Cooper ST MAXX 265/75/R16 tyres when travelling through sand and boggy conditions. Two spare wheels are also being carried.

Justin says the 9000lb Warn winch is more a precaution than anything else, but has already been put to use - rescuing a stricken truck from a river in Russia. A winch extension, snatch strap and snatch block are all part of the recovery kit, too.


The Camper
Perhaps the most interesting addition to the Lewis Globatrol outfit is the camper body. One of only two built so far, the body is based on a sturdy steel frame, skinned in aluminium and composite panelling. The steel chassis not only ensures the unit should survive an accident, but also that it doesn't have to rely on the ute tray for mounting and support.

The shell tapers in line with the body, to make negotiating tight trails easier. The same thinking is behind the idea of glueing the trio of 80W solar panels flush to the roof. While this may compromise the effectiveness of the panels, they're far less likely to be damaged by overhanging trees, etc., in this fixed position.

The electrically-operated roof rises vertically, exposing PVC sides with windows. Bungee cords are used to ensure the sides don't snag when the roof is lowered. With the roof raised, there's a surprising amount of room inside, even more when the bed, which lifts/lowers on twin gas struts, is raised.

Inside, there's a diesel-powered cooker, 80 and 40-litre water tanks (with a filtration system), pop-up shower, portaloo, diesel-powered heater, seating, a fold-down table and abundant storage space. Clever thinking places all the storage bins for large and heavy items as low and forward as possible, so they don't upset the vehicle's centre of gravity.

A pair of Fiamma awnings, slung off the passenger side and rear of the vehicle, allow for larger campsite set-ups as required, while the rear ladder can be padlocked to the back of the camper for security. The design allows for the rear storage compartments to be accessed without having to raise the roof; ideal for brief stops. There are also a number of externally-accessible storage compartments, power outlets and LED lighting.

The good ideas inside this camper extend to storage space for a pair of camp chairs behind the 60-litre Engel fridge, a bin bag on the back door, and even a vanity mirror on the clothes storage compartment.


Light 'Em Up
Another key element of the Lewis Globatrol, and one that's already proved its worth driving through the wilds of Mongolia, is the comprehensive Narva light pack. Narva, who are sponsoring the Lewis's journey, provided a pair of Extreme HID driving lights, '+50%' headlight upgrade and LED combination tail lights, with the piece de resistance being a 40-inch LED light bar incorporated into the front of the camper.

"Getting Narva lights on board for the trip was something we knew we had to do − you can't make a trip like this with two candles in front of the car," Justin laughed. "Visibility is a safety factor as well; and with Narva we've now got better front lights, better tail lights, better every type of lighting really.

"The Narva + 50% upgrade, made a massive difference straight away, and when you add to that the NARVA Extreme HID driving lights you've got the perfect combination."

When the 40-inch bar and HIDs are lit up, it's real 'night into day' stuff, making after-dusk driving much safer, as well as lighting the way when looking for an off-track campsite for the night.


Follow the Journey
At time of posting, Globatrol had been going for close to three months, including travel time from Australia to Vladivostock. From that jump-off point, Jen and Justin have already dipped into Mongolia, an area that the pair had been particularly looking forward to due to the landscape's similarity to many of Australia's remote areas. Thanks to regular maintenance, the Patrol is still running strong, but some of the high altitude driving through Mongolia has been putting the 4.2-litre diesel to the test.

Jen and Justin have also encountered a number of fellow travellers, some using 4x4-based set-ups similar to their own. Locals have all been captivated by the camper set-up, too, with Lewis's regularly having to show the camper's innards to curious natives.

To find out more and follow the journey, go to: www.globatrol.com 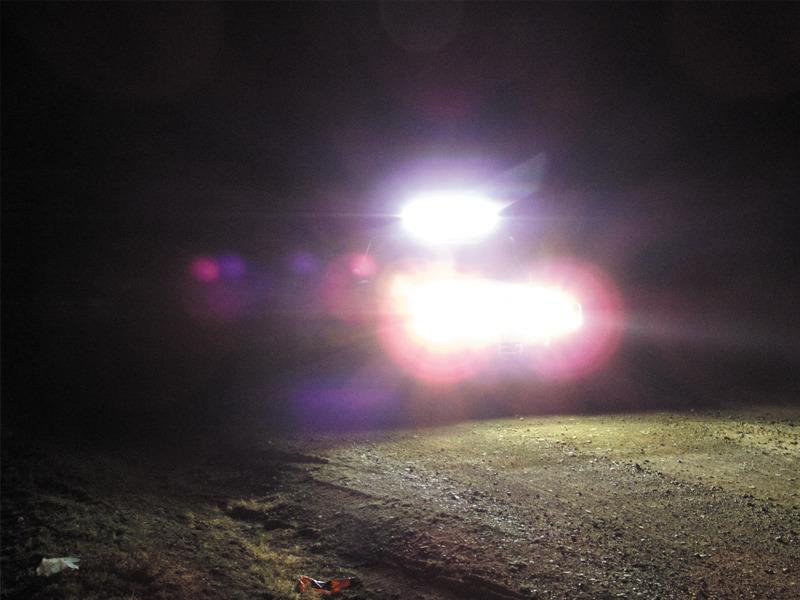 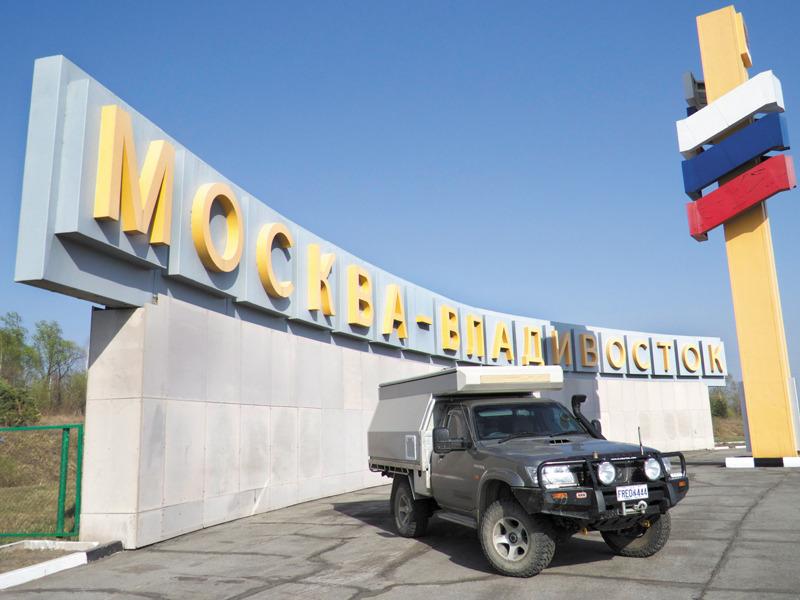 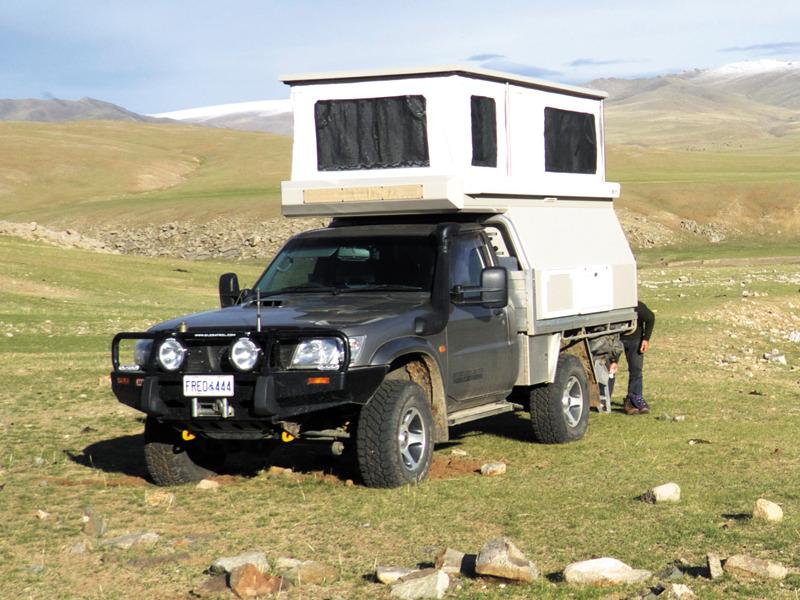 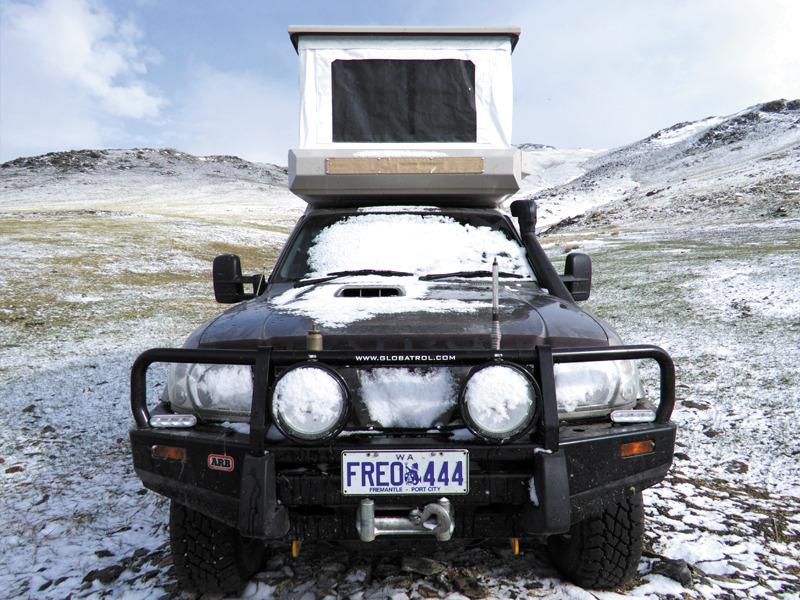 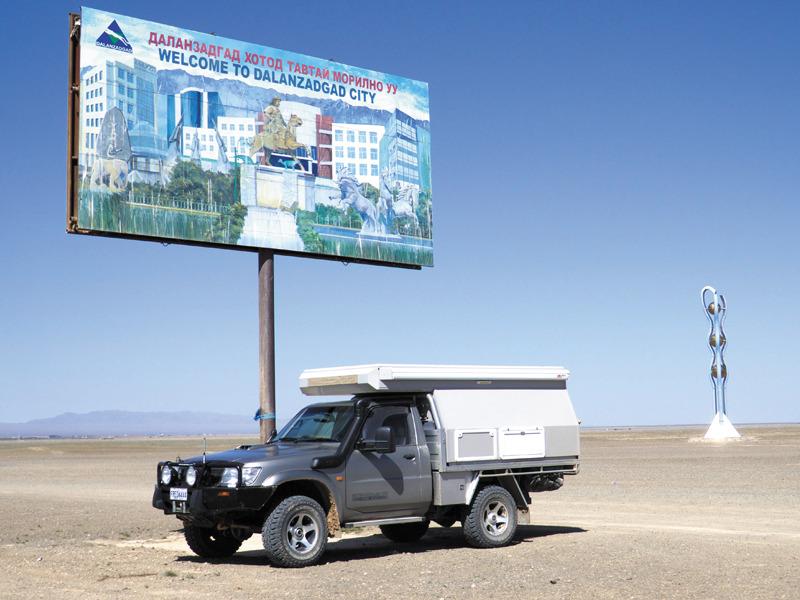