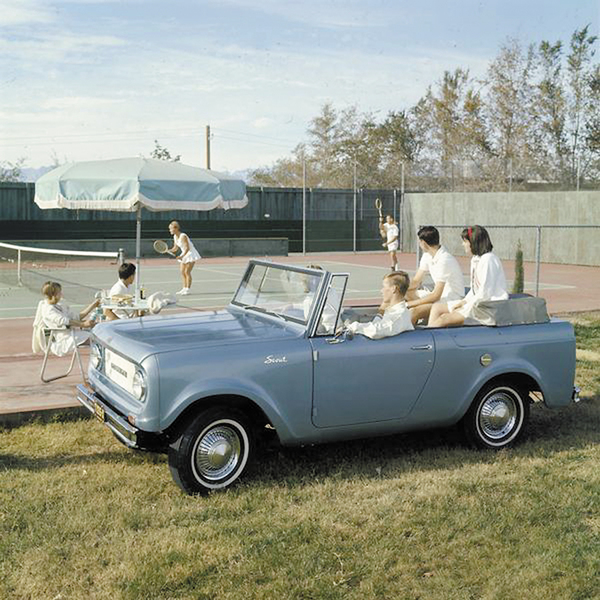 Prior to the 50s International Harvester produced many trucks but their first pickup was simply a re-badged Willys half-ton pickup
For a company that built its reputation on innovative agricultural products the successful production of a modern 4WD wagon seems unlikely. But this is just what occurred.

Prior to the 50s International Harvester produced many trucks but their first pickup was simply a re-badged Willys half-ton pickup. Introduced during the depression years, it gave no indication of what was to follow.

Come the 1950s and many manufacturers were experimenting with adapting 4WD to existing model ranges. They saw the success of the Land Rover and Jeep in civilian tasks and wanted a slice of the market.
As International Harvester was already a respected name in the rural market, it was logical that they should follow this trend, and in 1953 announced its first four-wheel drive light R series models. In 1956 four-wheel drive became more popular in the Travelall and Travelette models. The 4WD pickup was distinguished by new raised bodylines and the so-called "Comfo-Vision" cabs added such luxuries as angled steering wheel, roof lining and draft-free doors! The 4WD International pickup was an important model in their truck range, but it wasn't until the introduction of the Scout in 1961 that the market took notice.

Enter the Scout 4WD
The Scout was an impressive 4WD that for the first time took International away from its utilitarian/agricultural roots towards what was to become the recreation market. It was the first US produced 4WD that challenged the Jeep on the domestic market. Available in 2 or four-wheel versions it was IH's entry ticket into the 4WD SUV market. Styling was simple and straightforward. It's 152ci, 4-cylinder engine was derived from International Harvester's existing V8 truck engine.

The story behind the Scout is quite unique. Unimpressed with the design brief for the new vehicle, IH's chief designer Ted Ornas was to transform a doodle done on his kitchen table of what he perceived the new vehicle should look like, to reality after winning approval from the IH Board. A full-scale model was built in 1959, and while Ornas dreamed of using fibreglass panels, these were deemed too expensive, so the vehicle was developed with a steel body. It was built on a 100-inch wheelbase, was slab sided with a rectangular mesh grille flanked by headlights, and high mounted tail lights. It had a five-foot cargo bed that was integrated with the three-passenger cabin.

Rooflines included a short pickup cab style and full length Travel Top that gave the Scout the look of a two-door station wagon. Both steel tops were removable as were the doors. The name "Scout" was a nickname used for the project and it stuck, being officially endorsed by the board. On November 20, 1960 the first Scout came off the assembly line. It was officially introduced on January 18, 1961 at base prices of US$1,598 for the 2WD and US$1,948 for 4WD models.
Demand far exceeded International's expectations and production was rapidly increased from 50 units a day to 100 vehicles a day by February 1961. By November 1961, Scout sales had reached 25,000 units. It was soon to become the best selling vehicle in the company history.

The fully enclosed Travel Top version was the most popular model, despite projections that the pickup version would be the top seller. Similarly 4WD was chosen by 80 percent of customers. While the initial plan had been to design a 4WD pickup, things rapidly changed direction as an emerging recreational 4WD market saw the potential of a long-cab version. International responded by installing a back seat, and while these early Scouts were still very utilitarian, improvements soon followed.

By 1963 the Scout had gained so much in popularity that around 75% of sales were to non-business users. The 1963 Scout was offered with optional roll-down front windows as an alternative to the standard two-section, horizontal sliding units. In 1965 the Scout received other upgrades with carpeting, and an optional four-speed transmission. Styling changes also saw the latest Scout gain an aluminium grille with horizontal "International" lettering in its centre. The body was fitted with an "IH" emblem.

New model Scouts
1966 saw International expand the Scout's market potential by introducing two new upmarket Sportop models with front bucket seats with matching rear seats, and liberal use of interior coverings. The Sportop Scout was available with soft or hard top along with roll-down front side windows, chrome mouldings and swing out rear windows. During the year International introduced a larger version of the Scout's 4-cylinder engine along with a V8. International claimed a Scout with the new 4-196 engine could accelerate from 10 to 60mph in 26 seconds!

The following year Scout was offered in Utility, Custom or Sportop versions. Additional safety equipment was added to all models to meet government regulations. The '4-196' engine became the standard Scout engine in 1968, and the turbocharged version was dropped. During 1968 the 200,000th Scout was produced at International's Fort Wayne facility.

1969 Auto Scout
1969 was another big year for International with significant updates to the Scout range. The main mechanical progress was the introduction of the revamped 800A version of the Scout. Among the improvements offered by the 800A was a single lever transfer case and for Scout's powered by the V8 engine, a new 3-speed automatic transmission. It was controlled by a floor-mounted shifter with 'PRND12" range. The transmission could be shifted through its three gears manually, or when the lever was placed in D, would shift automatically. The transfer case had four positions: 2WD high, 4WD high, 4WD low range and neutral. Shifting could be done when the Scout was in motion.

Following the introduction of the 800A Scout, was the announcement of a Limited edition "Aristocrat" version of the Scout, also in 1969. Only 2500 were produced and all were presented in identical metal blue, full length Traveltop and a silver lower body finish. Another Limited Edition Scout - the SR-2 - was released in 1970. Only 2,500 of the easily recognisable vehicles were released. The SR-2 wore a flame red paint finish with two white hood stripes; upper and lower body striping and chrome wheels fitted with Polgas tyres.

Production of the SR-2 continued into 1971 with later versions offered in a variety of colours. Free wheeling hubs were standard, and the interior was finished in black vinyl with full carpeting, wood grain appliqué trim, and chrome inserts for the dash gauges. The new Scout 800C, or as it was more commonly called the Scout II went into production in mid 1971. 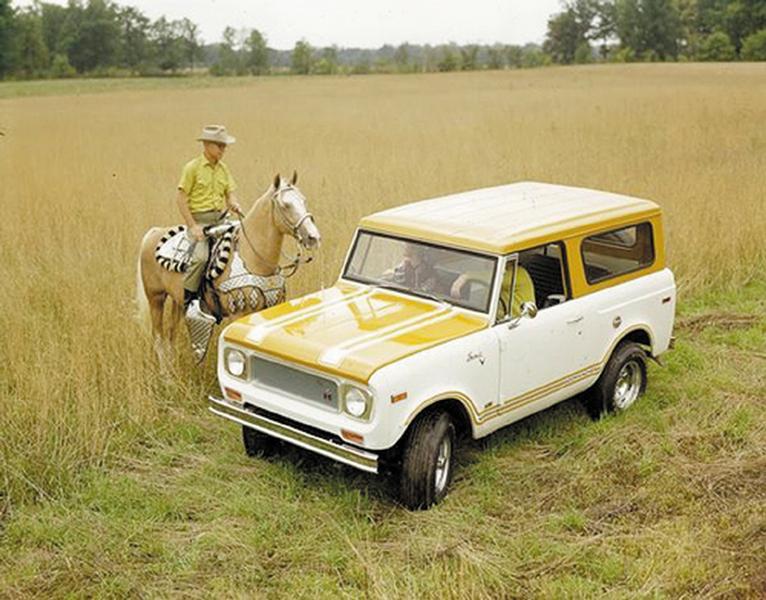 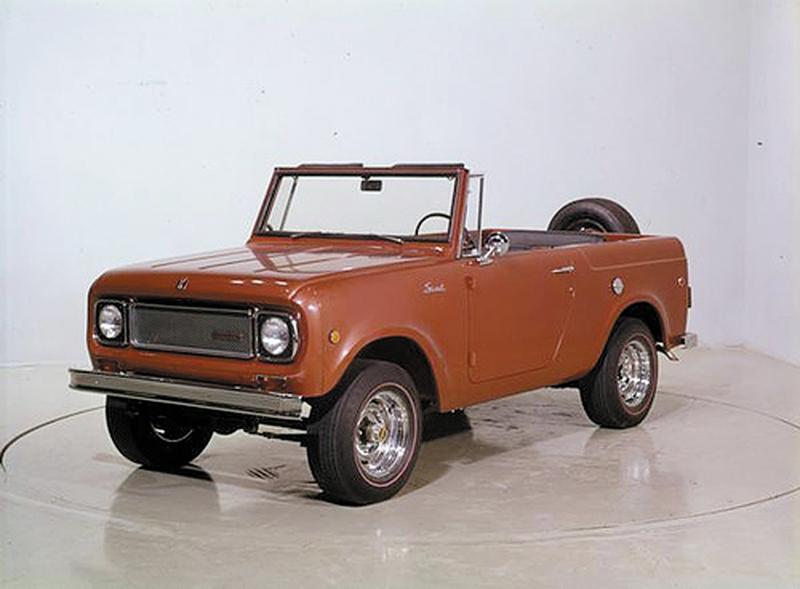 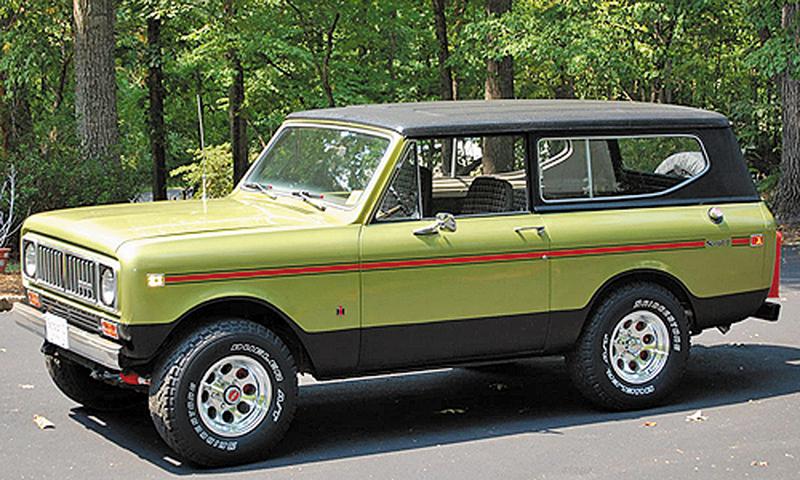