The new Nissan Navara Pro-4X Warrior will arrive in dealerships from September 1.

Nissan has confirmed availability and pricing for the new Nissan Navara PRO-4X Warrior that replaces the previous N-Trek Warrior.

Improved with further development and some new parts, the latest top-spec Warrior is based on the new MY21 Navara PRO-4X which brings upgrades already to the current-gen Navara. 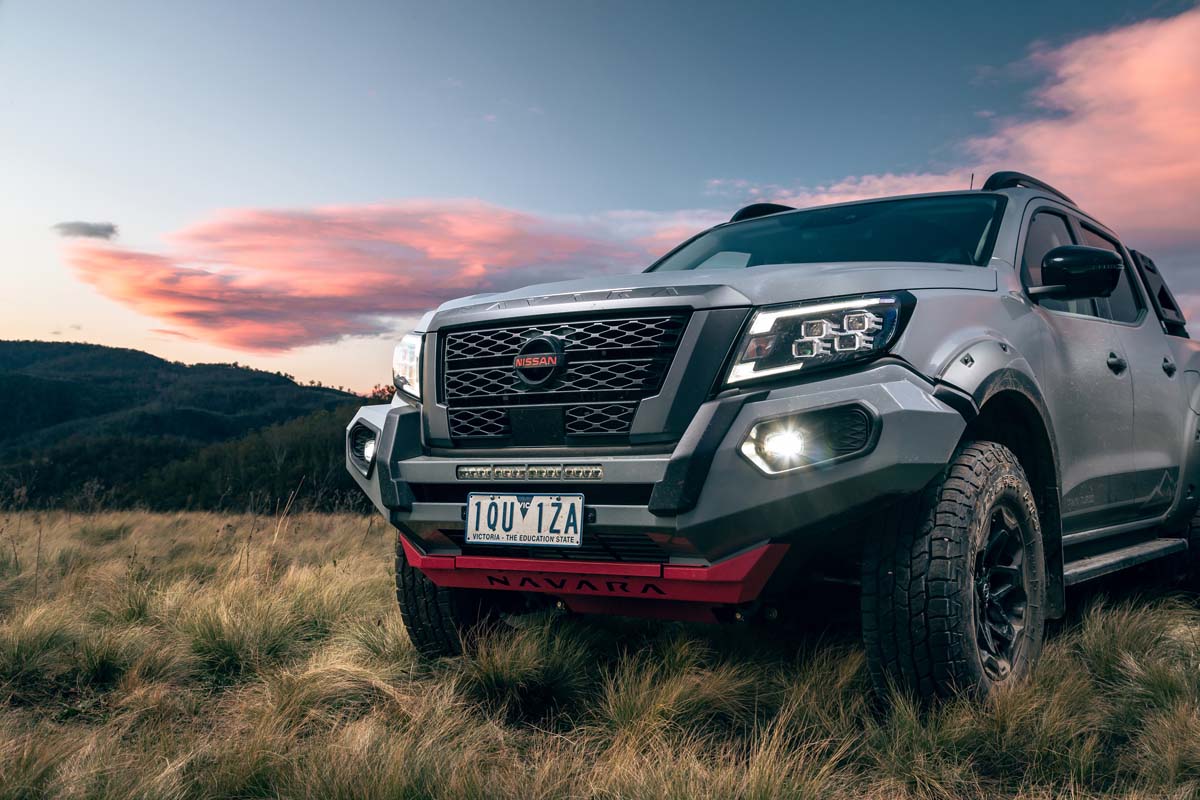 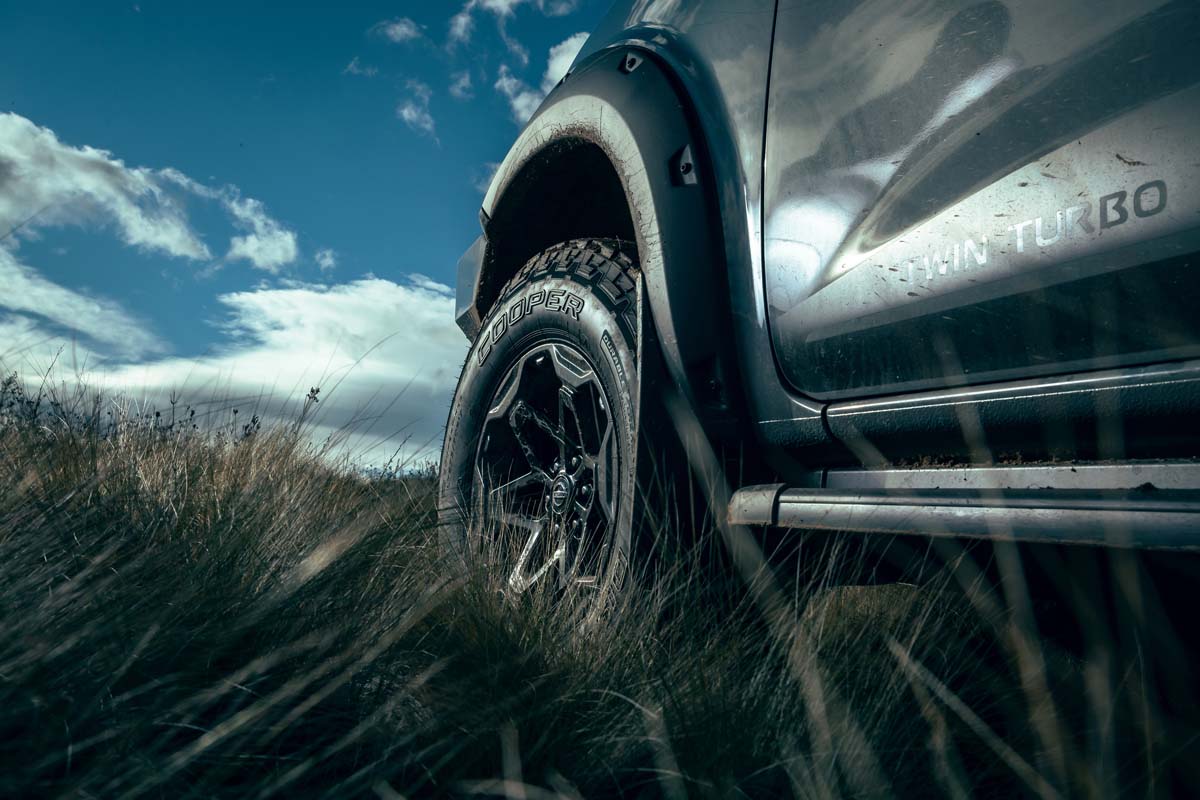 The new PRO-4X Warrior was first unveiled to usinside the factory where Melbourne engineering firm Premcar will produce Warriors on a specially made production line, the model brings new components with further local development and validation work plus the use of far more local parts (up from around 30 per cent to 80 per cent of all new equipment). The only items that are a direct carryover are the wheels, tyres, and the reconfigured tow bar which allows for a full-size spare wheel to be mounted underneath the tray, although there are some tweaks in that area that make access and removal of the spare easier. 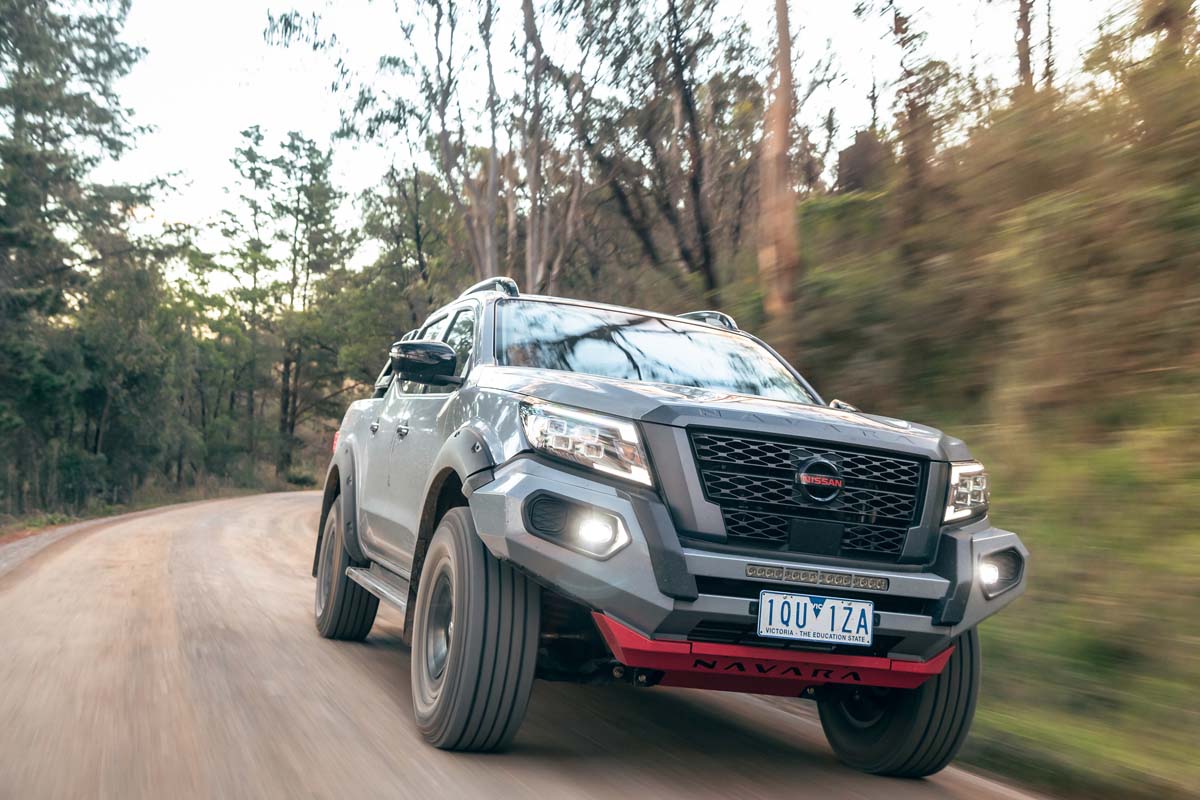 Pricing is yet to be announced, but expect a circa $69-70k driveaway price if the previous Warrior is anything to go by. This puts it up against the likes of the Toyota Hilux Rugged-X and Ford Ranger FX4 Max. Interest can be registered now, with deliveries expected within the next few months. 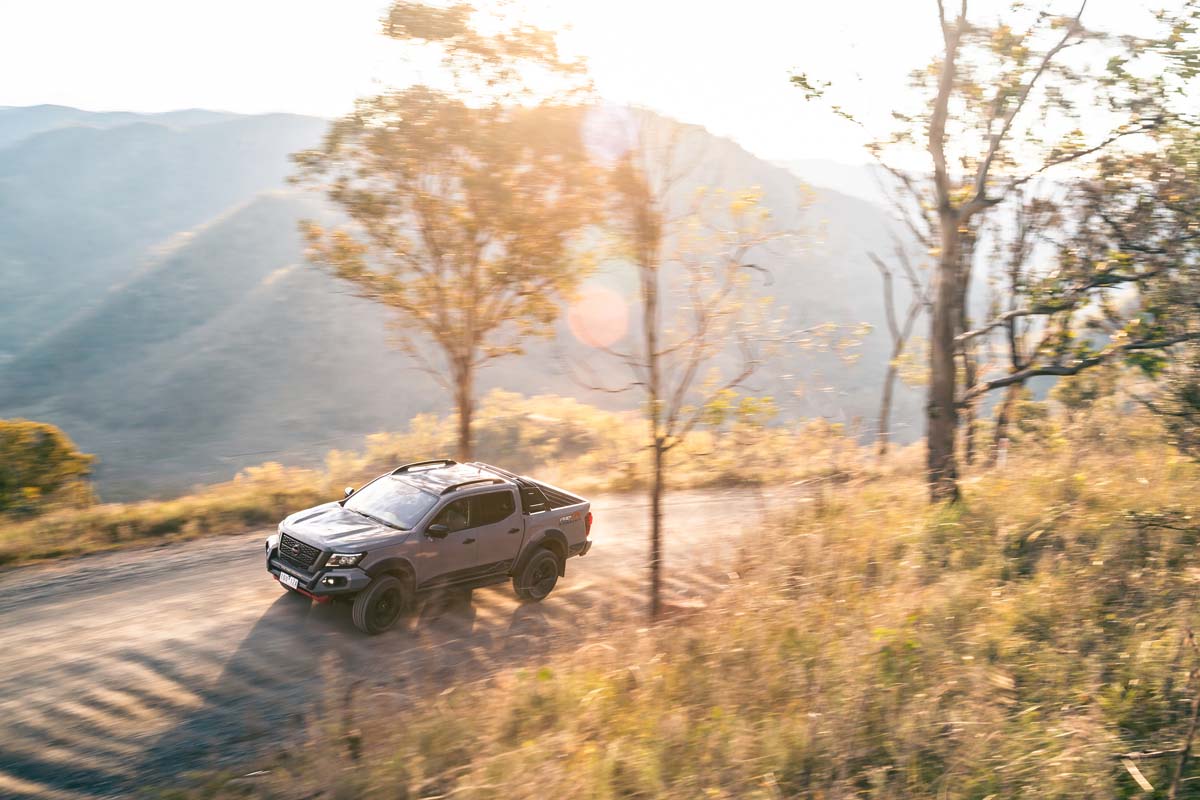 Nissan and Premcar say that while many of the changes are similar to before, there has been tweaking of the components to further improve capability and some improvements are significant. Of note is the upgraded payload to 952kg for the auto and 961kg for the manual. The overall GVM increases 100kg as well to 3250kg – this was a sticking point on the previous model for some as the payload was 720kg (auto).

The braked towing capacity is still 3500kg, equal with other class leaders, and the modified tow bar is at the same height for towing despite a 40mm lift.

Also new is the hoopless front bar that is designed differently from the old Warrior (though looks similar) and can house a winch internally. The item is produced in Melbourne and Premcar gives it a specially formulated powder-coat-style finish that should last the distance with stone chips and knocks. You may also notice the LED lightbar upfront is now incorporated into the bar rather than mounted on it too, providing some further protection. 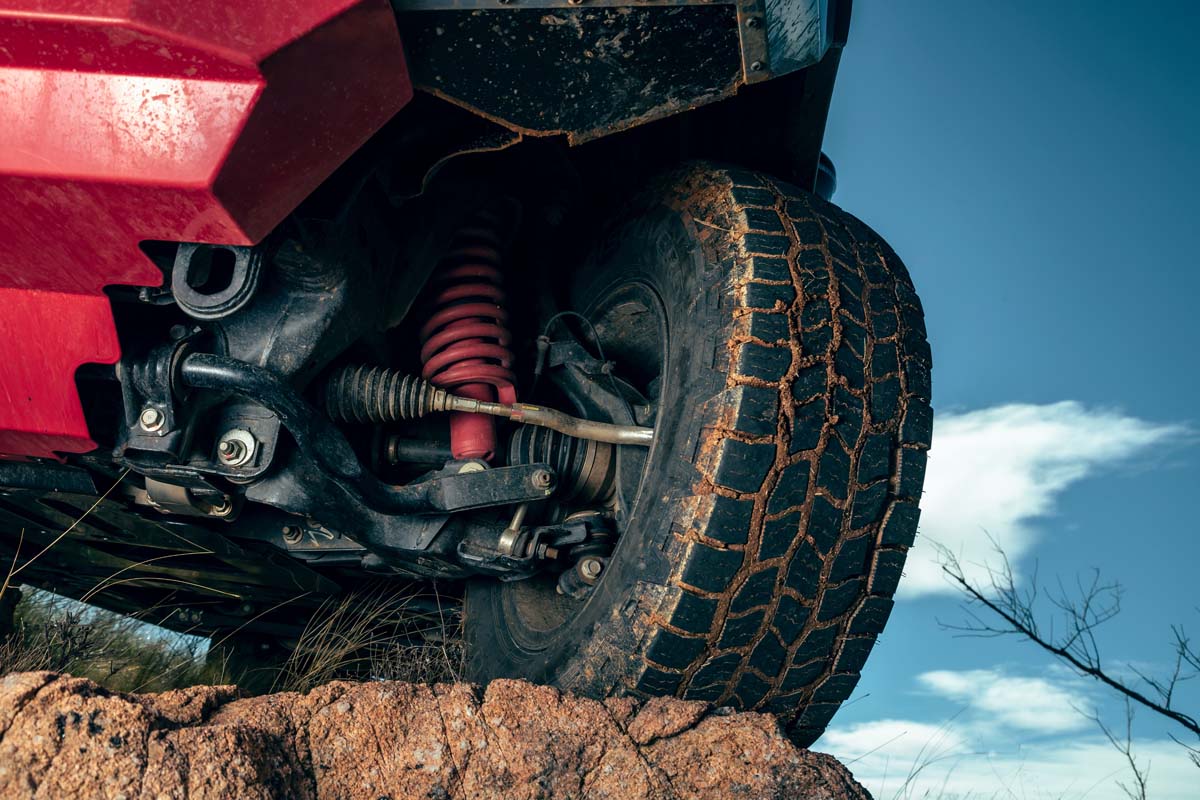 The new front end, which blends in with the more bluff MY21 Navara facelift including C-shaped LED headlights and a ‘Titan pick-up-like’ grille, improves approach angle to 36 degrees (up 4deg) while departure angle remains the same at 19 degrees. One further trick is that the new front bar is fully compatible with the MY21 Navara’s safety systems including AEB. 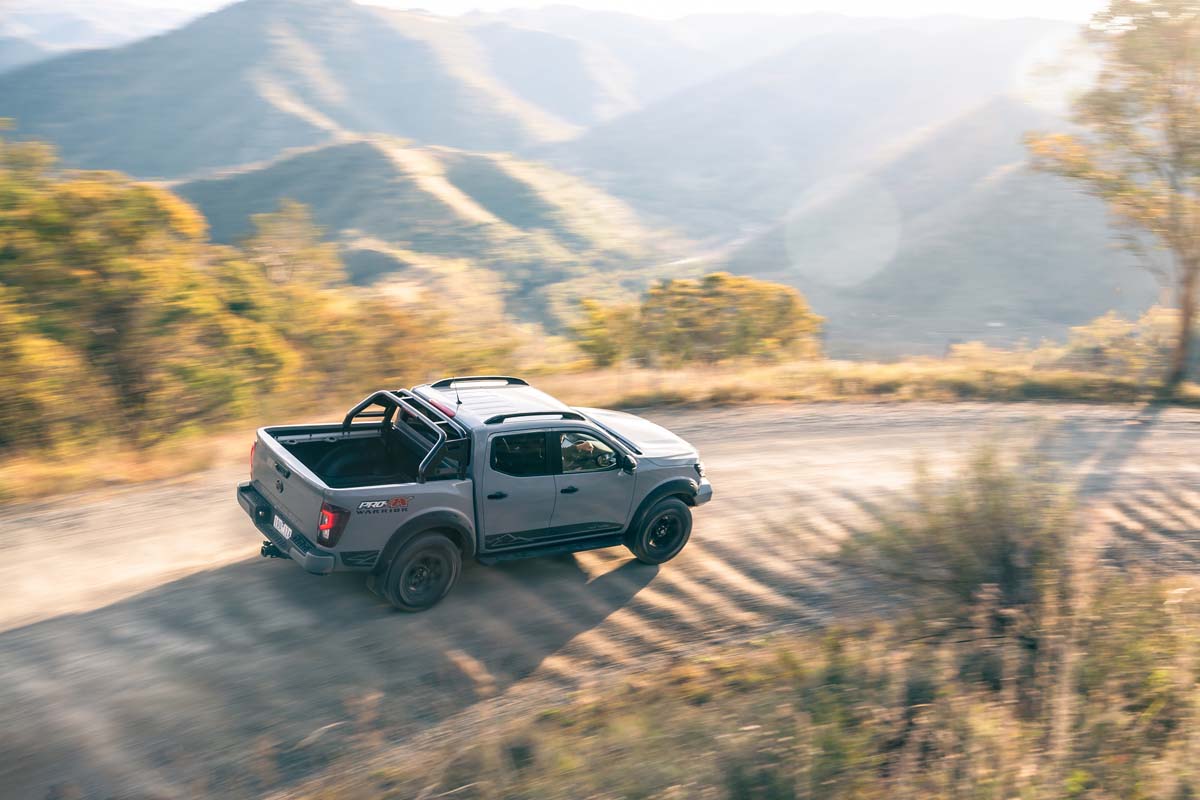 The on paper specs are the same for suspension life though the shocks, springs and front bump stops have been modified due to the increased GVM and to improve on and off-road performance further. According to Premcar boss Bernie Quinn: “Suspenios upgrades are not as simple as adding some lift and bigger tyres. Whatever we do it has to be developed for Australia and hold up to that five-year warranty and we have to improve that bandwidth of capability which means when we add springs and dampers it’s not great for offroad but just drives like a horse and cart on road. 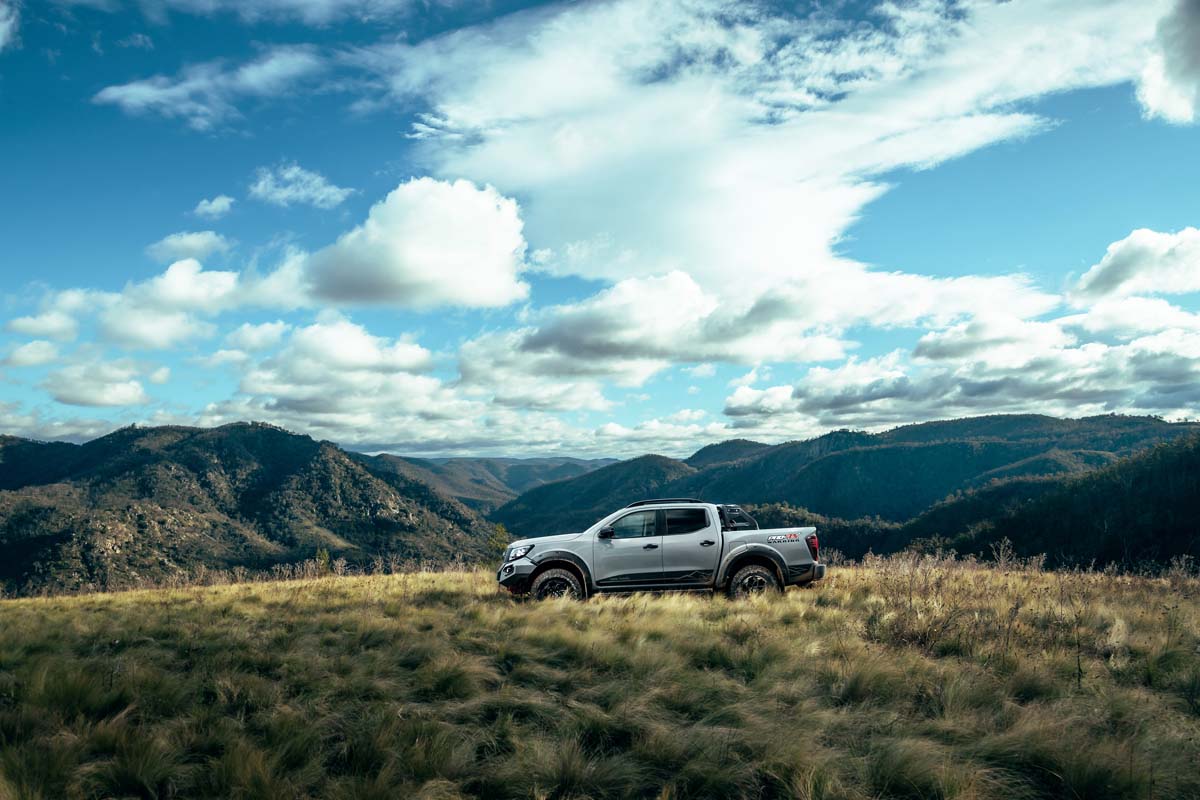 “Not only when we do suspension tuning and we do iteration after iteration we also do durability and accelerometer and linear potentiometer doing durability testing all of the time to make sure we stay within the durability of the platform car. It is not something all OEMs do and not something you get from the aftermarket either.” 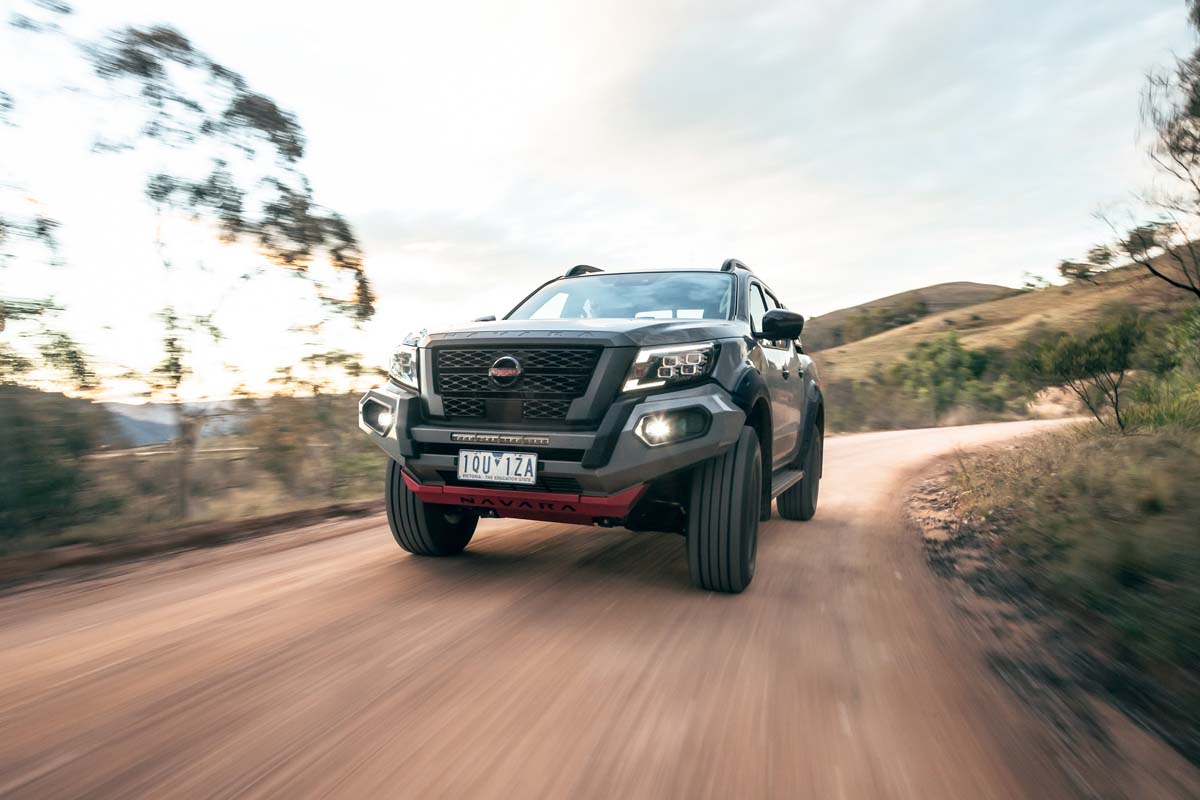 The exact changes are that ride height increase 40mm to provide 260mm ground clearance (and the same 600mm wading depth as other Navara 4x4s, not a snorkel is an optional extra) via a 25mm suspension lift (new front and rear springs and dampers, new front bump stops) and the new larger 32.2-inch Cooper Discoverer AT3 all-terrain tyres. The total vehicle height increases to 1920mm. 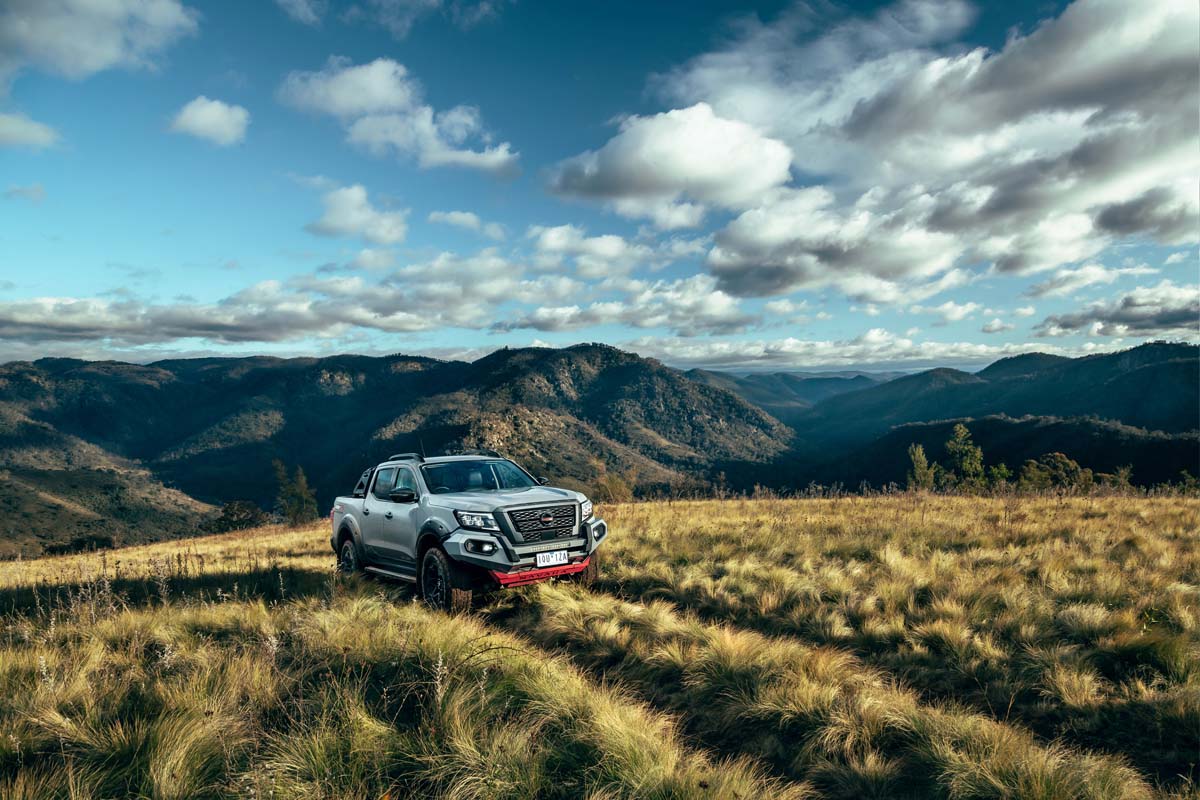 The track width increases 15mm on each side for a total 30mm wider footprint and the new jaunce bumper, which absorbs impacts, was developed in partnership with a firm in Clayton. According to Quinn from the feedback he received during independent ADR testing, the new Warrior’s handling was one of the best tested for a dual-cab ute in this segment by that firm. 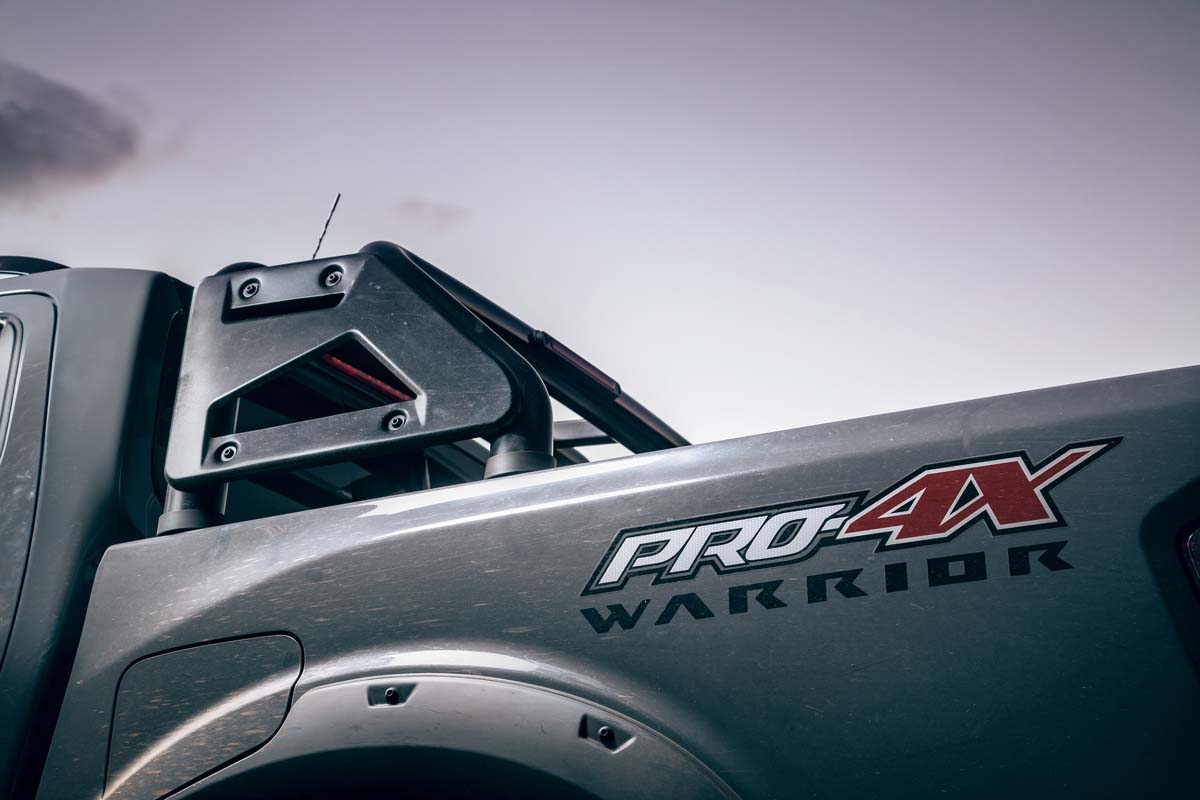 “Some of the ADR testing is carried out by a third party and the third part came back and said this is one of the most stable they have ever tested. Not just one with accessories on it but of all of the dual-cab utes they have tested,” said Quinn.

“There is a reason we changed the track width, if you go up you have to go out as well. Not all of the competitors do this, they don’t all increase the track. We were able to do it because we put all of the extra effort in.” 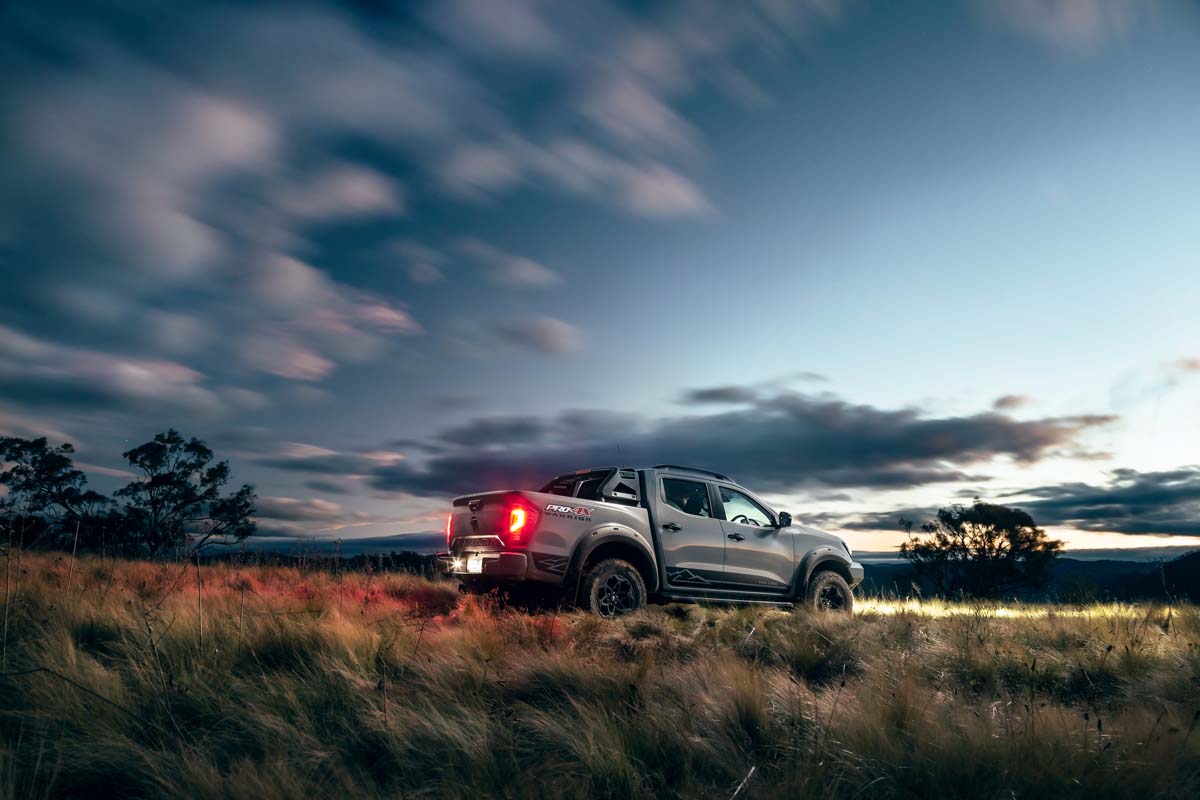 Guarding the lower front is a bright red bash plate (the paint matching suspension components) and 3mm steel plate protection is underneath the vehicle. On the side are unique plastic fenders to the Warrior grade. In the back is the PRO-4X sports bar and a cargo rail system also shared with that grade, is located in the tray. The tray itself sits higher but the MY21 facelift adds a lower step to help getting up there if the tailgate isn’t down. 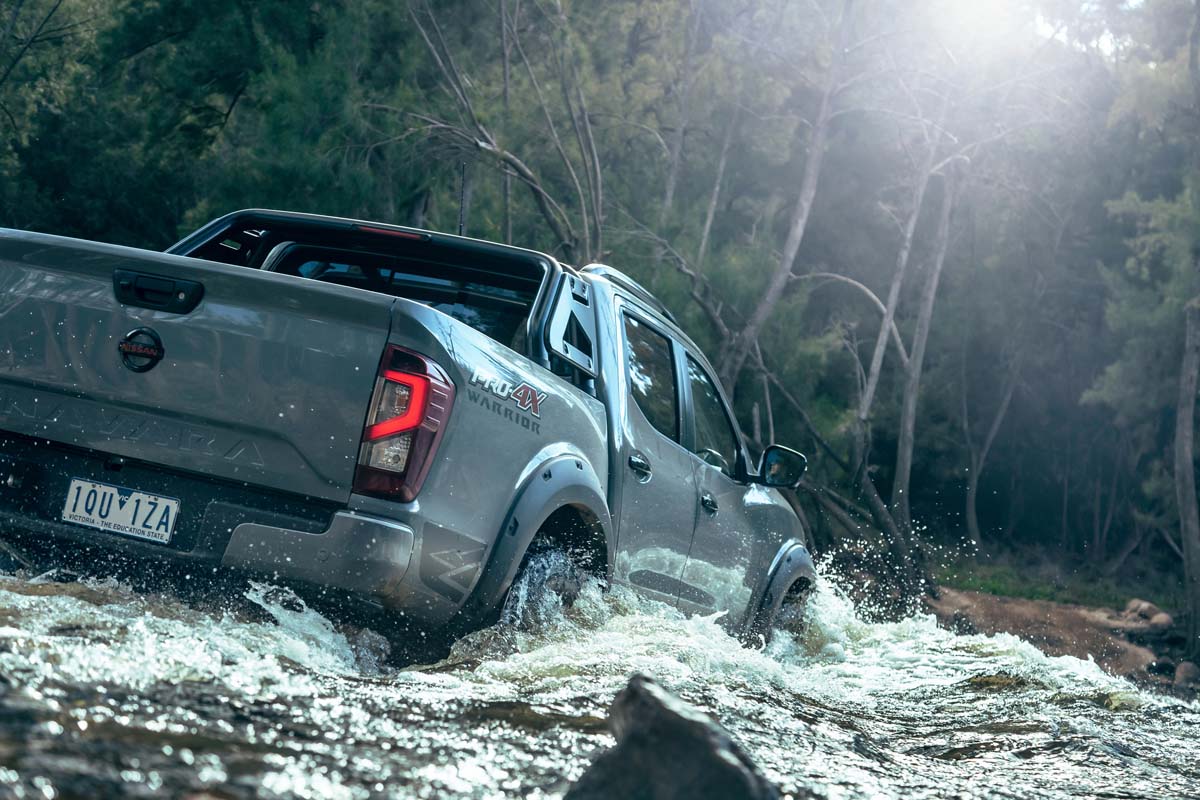 While the Warrior is a modified PRO-4X, many hours and cycles of testing (up to 2 million cycles on the tow bar alone) for validation means it is covered by the standard Nissan five year, unlimited-kilometre warranty. Some of the engineers behind Premcar are ex-Holden, Toyota, Ford and even Vinfast (yes, that happened fast) and testing occurred on local proving grounds. 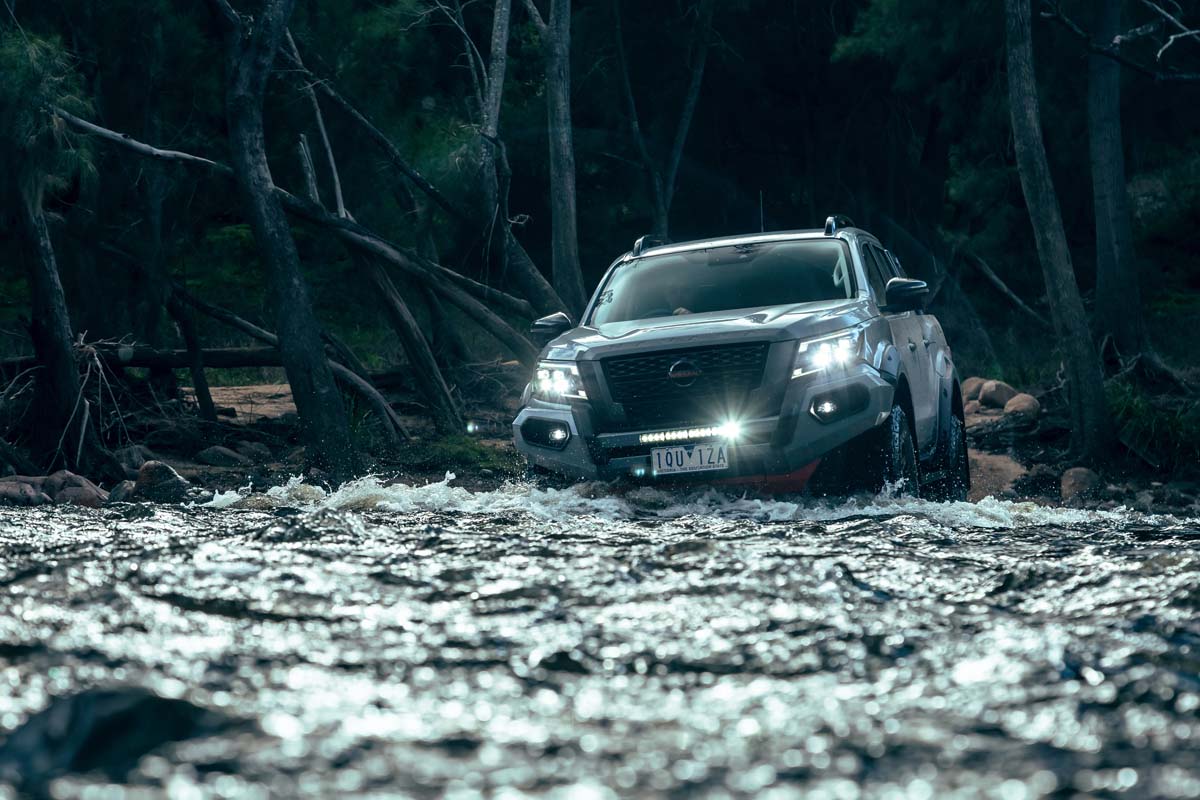 Along with additions from Premcar the general MY21 Navara facelift also adds improvements to NVH (which we’ve found to be true in our testing), and despite the modifications to things like the jaunce bumper the NVH for the Warrior is said to be just as good as the facelifted models. 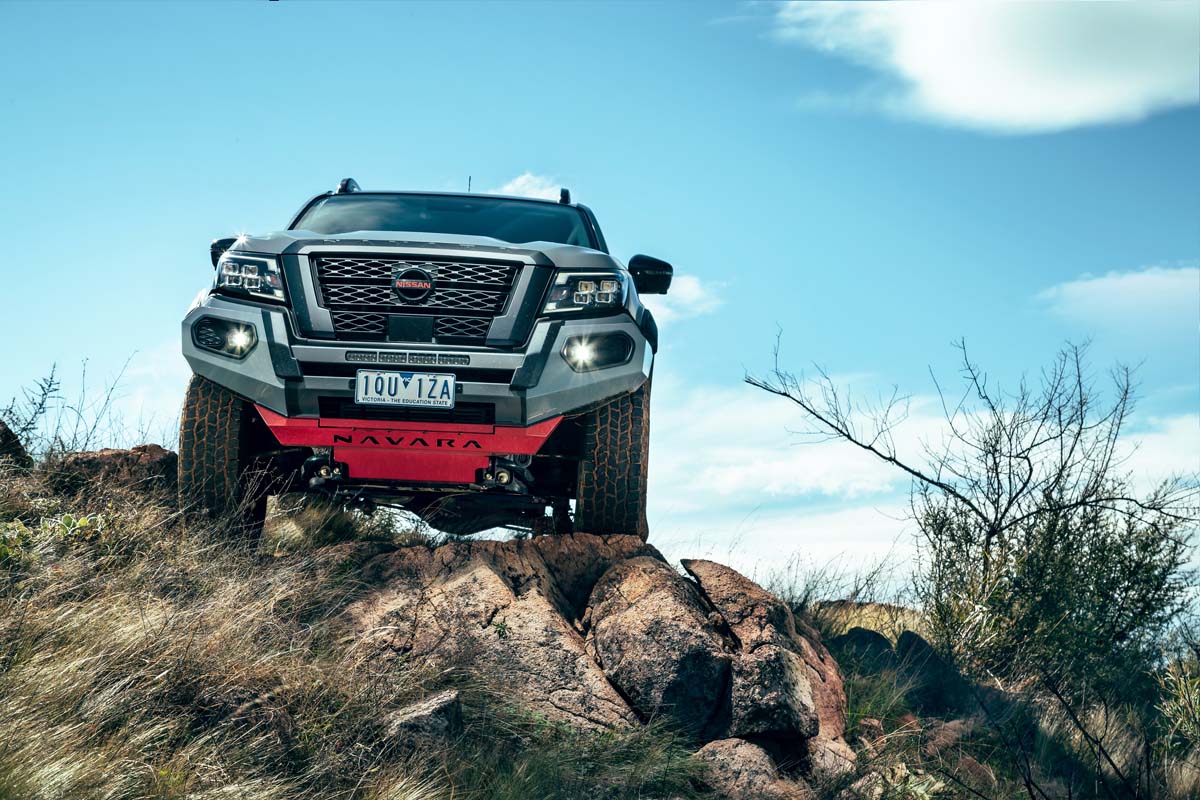 This is Nissan and Premcar’s reveal and detail, but with the car not ready to sell for at least a couple of months, pricing has not yet been released. We expect a circa $65k price and around $70k driveaway deal with models rolling on showrooms late August to September.

Unlike the N-Trek Warrior which was limited to 1400 units due to it being produced at the end of the previous series, there is no limit for PRO-4X warrior production.