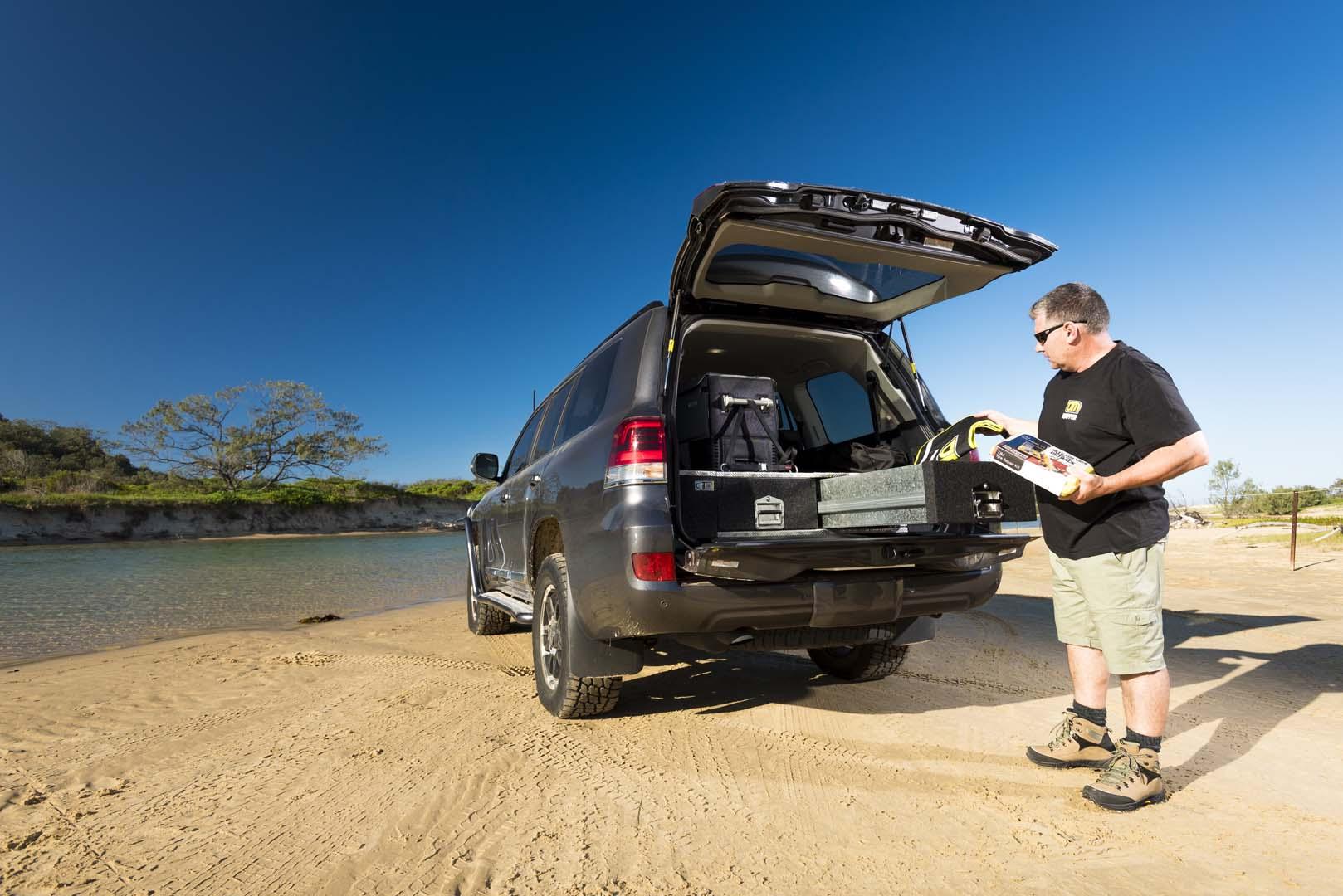 Fitting gear into your 4x4 is one thing but being able to easily access it is another. If you struggle to reach your recovery equipment when you need it, or can’t get to your fridge to grab a coldie at the end of the day, it sounds like you need a drawer system. 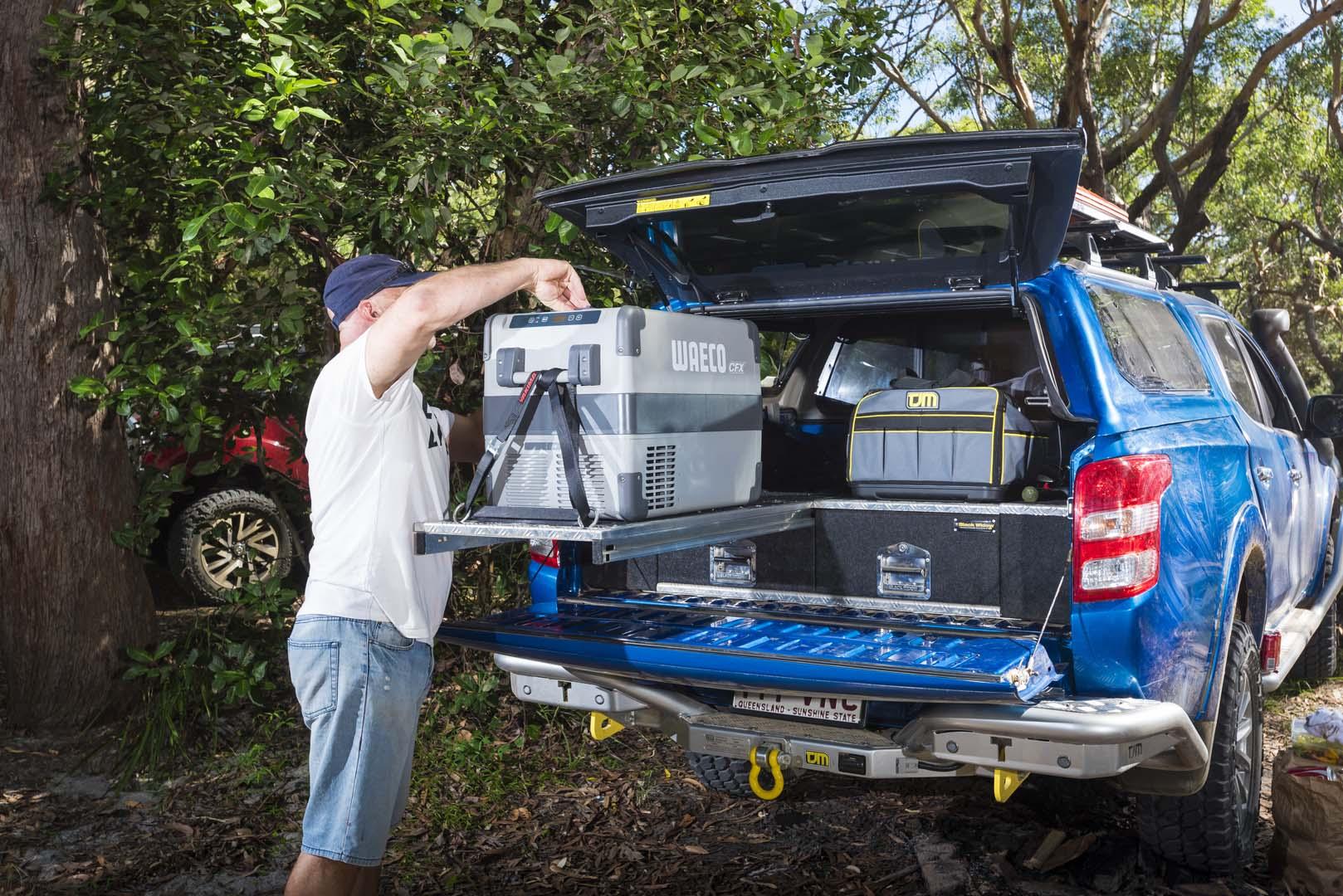 I remember when I was a kid watching my old man meticulously pack the wagon at the end of a long week so we’d be set to escape early on a Saturday morning for the start of the school holidays. With three kids across the back seat, he had to make use of every inch of available cargo space, and over the years he developed a system that allowed him to squeeze everything in, including the Esky, the tent, the sleeping bags, the gas bottle, the barbecue, the clothes, the food and even the dog.

While it all fitted, there was little thought put into tying said luggage down, or ease of access to specific items en route. Nope, everything stayed in place until we reached our destination except, perhaps, for a few pre-made sandwiches that were stowed up front with mum.

When I got into the four-wheel driving caper about 30 years ago, my vehicle-packing technique started off similar to that of my dad’s, but I soon realised there were several items I needed to access regularly, such as recovery equipment, tools, tyre levers and such. I also carried heavy items that needed tying down, so if I didn’t plan the packing procedure properly, accessing certain stuff could require a total unpacking of the vehicle.

As the years progressed, so too did the amount of gear I took away on trips, including the trusty Engel, more camping gear and cooking equipment, and even more recovery equipment. Having tested several drawer systems over the years, I’m now a firm believer that there’s no better way to pack gear into a vehicle for a trip away, whether it’s in a wagon or a ute. 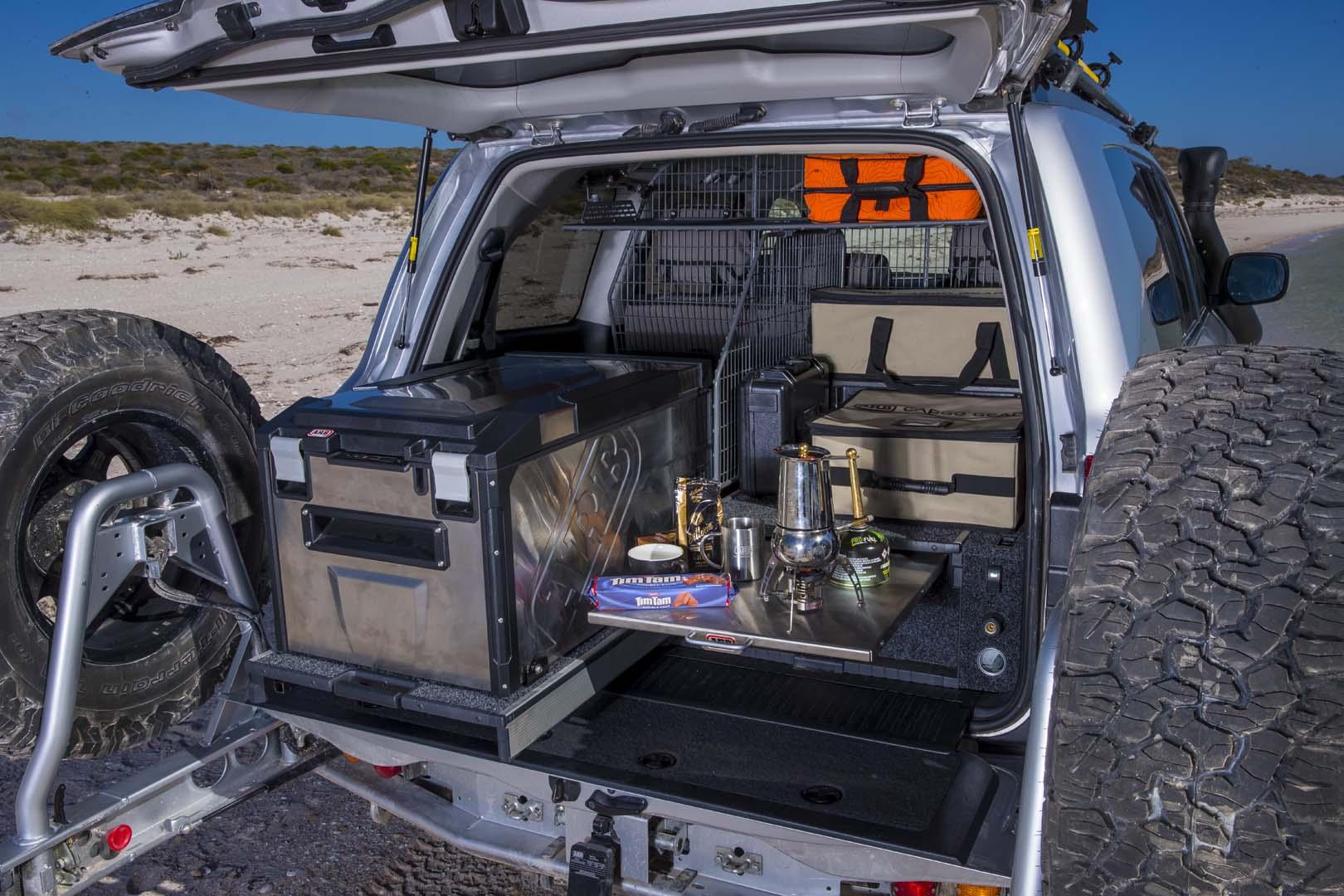 The main benefit provided by a set of cargo drawers is easy access to items; as the drawer pulls out you can reach stuff that would otherwise be wedged up against the back seat of a wagon or the front wall of a ute’s tub. And depending on the drawer set-up you opt for, you can still have large open area for stowing larger items on top of the drawer, such as a fridge, cargo box, luggage or sporting equipment.

Another benefit of a cargo drawer set-up is you can stow heavy items in the drawers and lock them shut so they don’t pose a risk to passengers in the event of an accident, or when the vehicle is bouncing around on rough off-road tracks. Most drawer systems will also offer key-lockable latches, so you can stow valuable items in the cargo area, even in the back of a ute.

Many drawer systems will offer sturdy luggage tie-down points on the top surface for securing additional luggage or large items such as fridges, and some will also incorporate a built-in fridge slide or even a slide-out table. 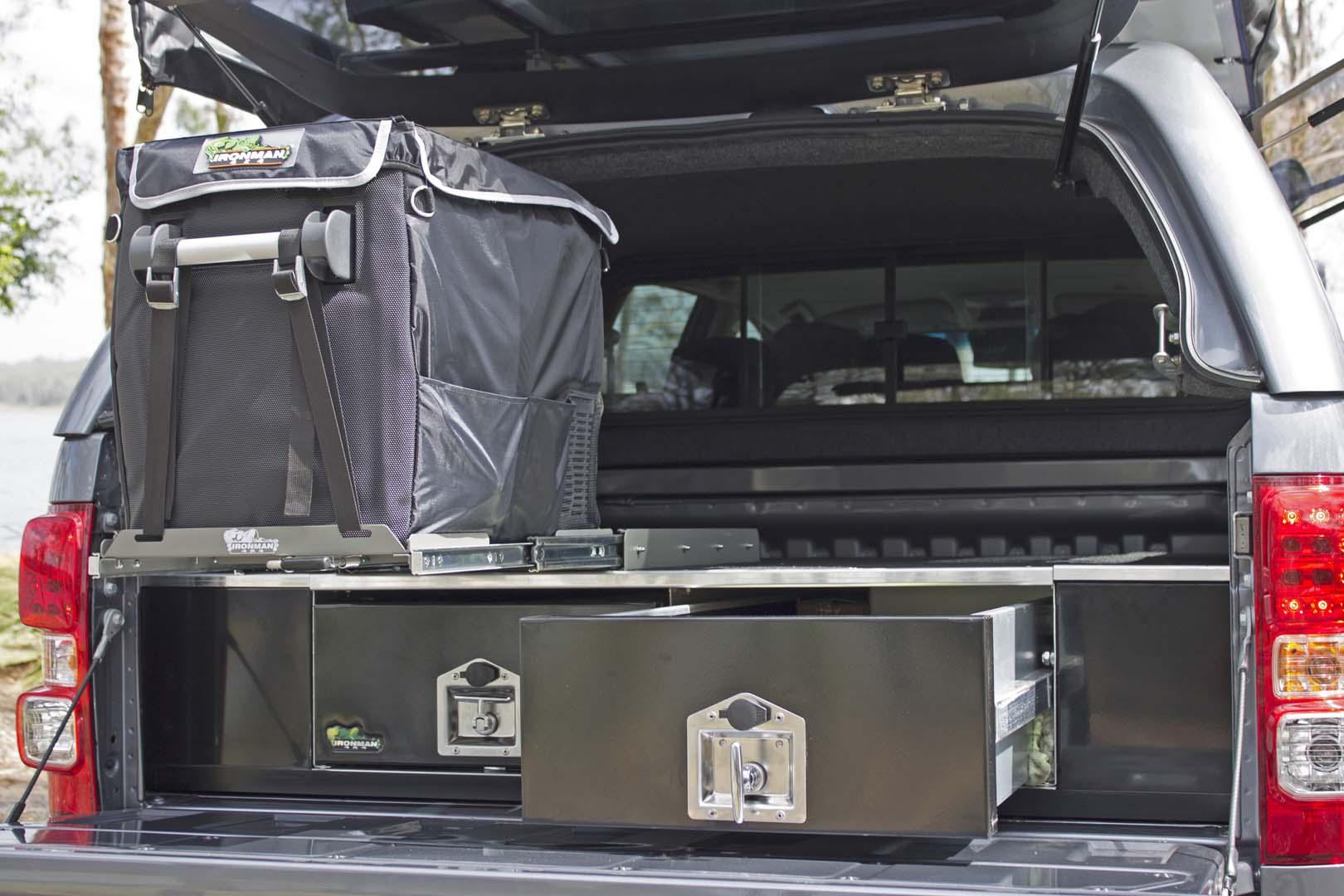 While many cargo drawer systems look the same, there are several different types on the market manufactured from a variety of materials including marine ply, aluminium and steel.

Remember, the weight of a drawer system must be deducted from your vehicle’s overall cargo capacity, so if you drive a 4x4 wagon with a low payload, you’ll want a lightweight drawer system. If, on the other hand, you drive a ute with a one-tonne payload capacity, then drawer weight might not be such a priority.

If weight is an issue, there are a number of manufacturers who build drawers from light but strong aluminium, but they are more expensive then steel drawers. If weight is not such an issue, then a steel drawer system will be the most cost-effective solution. Bear in mind, however, that even some basic steel twin-drawer set-ups can weigh in excess of 100kg, whereas an aluminium equivalent will weigh as little as 50kg.

Marine ply is another lightweight material used by some drawer manufactures, and it’s also a favourite amongst DIYers, as it’s light, strong, water-resistant and relatively easy to work with.

Most drawer manufacturers offer a range of systems designed to suit specific vehicle makes and models. Many of the components, such as the frames and drawers themselves, will be the same for different vehicles, with components such as wings and end-covers the only parts designed for vehicle-specific fitment.

While the main advantage of buying an off-the-shelf system is price, these systems can also sometimes be transferred in to your next vehicle, assuming it has similar cargo dimensions, simply by modifying or replacing the wings and end-covers.

On the downside, an off-the-shelf system might not take full advantage of all the available space, in which case a custom-made drawer system can be a better option. Of course, a set of custom drawers will cost more and, unless your next vehicle is the same make and model as your existing one, you’ll probably have to say goodbye to the drawers when it comes time to sell. 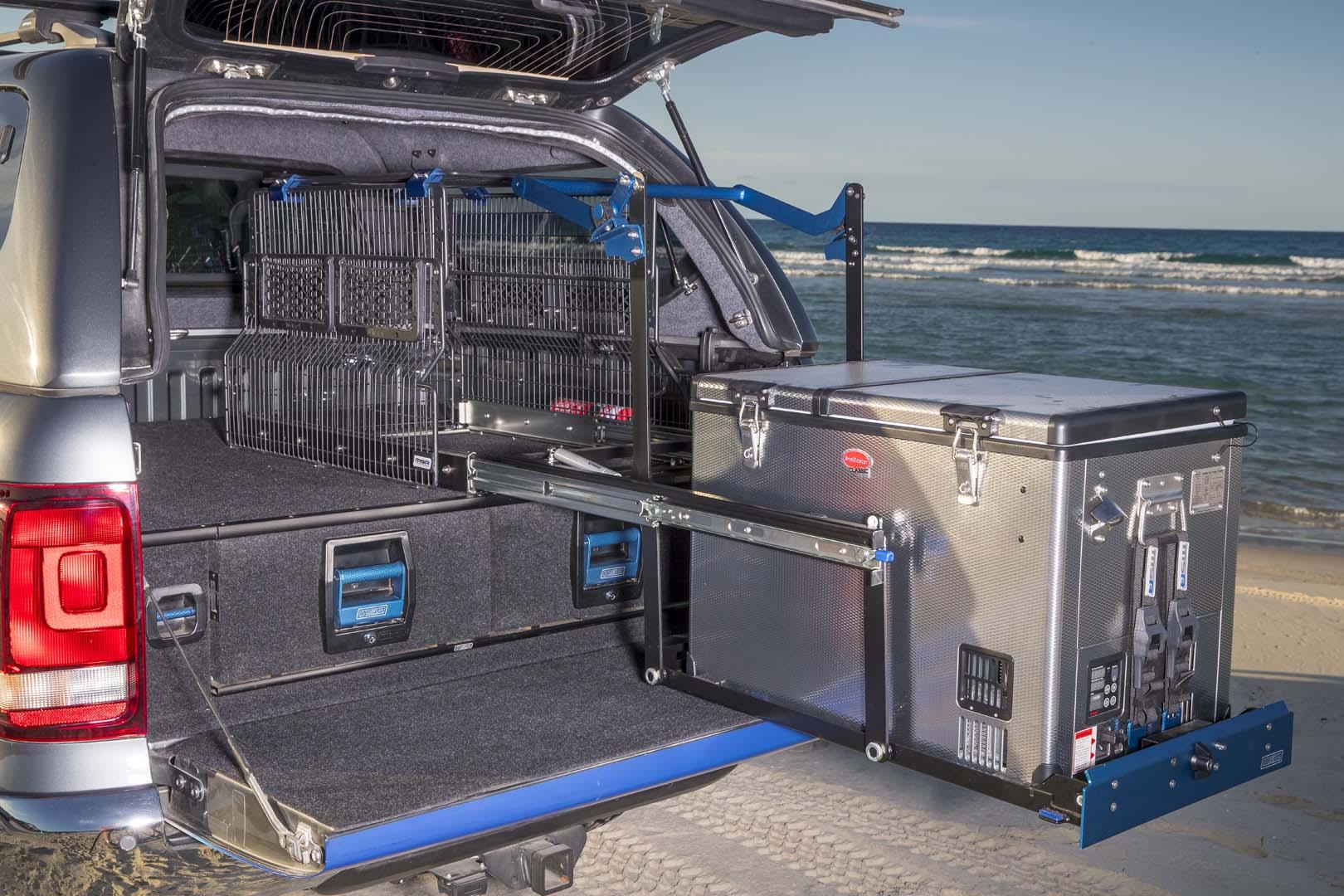 Many drawer systems feature a modular design, allowing you to pick and choose components to best suit your needs. For example, you might want a simple side-by-side twin drawer set-up, or you might want two drawers stacked on one side of the cargo area and a low-mounted fridge slide on the other.

With modular systems incorporating drawer of different depths and widths, and various types of fridge slides, there are any number of options available to you when choosing the right set-up for your vehicle and your requirements, so take your time and think about what gear you have, how you’re going to pack it and what space you might need outside of the drawer system to stow bulky items. 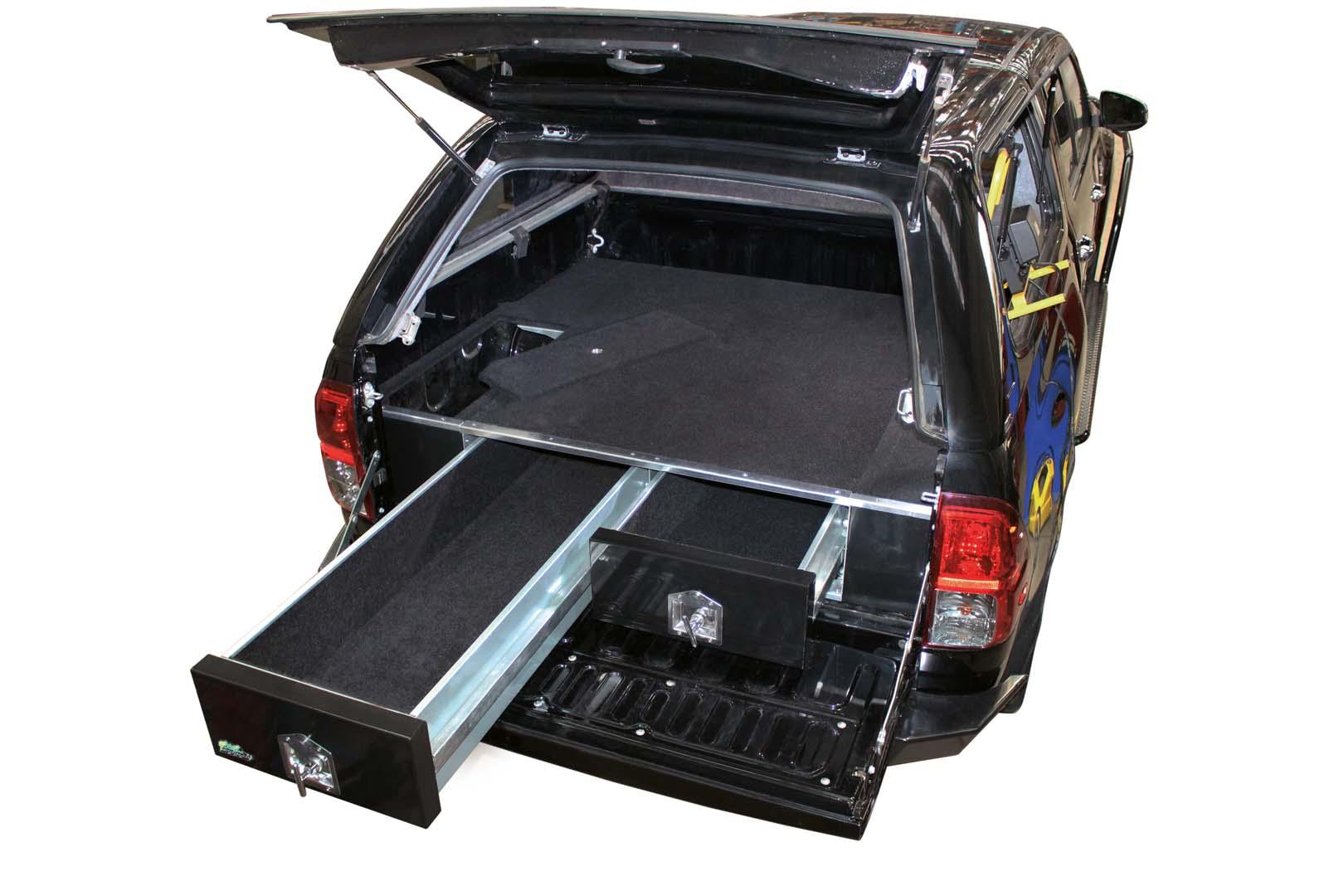 When choosing a drawer system have a good look at the quality of the components. Check out the weight rating of the drawer runners or slides to make sure the drawers will be able to cope with what you’ll throw in them. Have a good look at the handles to make sure they won’t snap off under load and examine the way the latches operate to ensure they slam shut easily when you push the drawer in and open easily when you want to pull it out.

If the drawer’s top surface has tie-down points, make sure they’re recessed so luggage and other gear won’t catch on them, and ensure they’re going to be strong enough to secure heavy items.

The exterior of most drawer systems will be finished in a durable marine carpet. Have a look inside the drawers to make sure they’re similarly lined. Carpet can help prevent stuff from rolling around and getting damaged in transit, and good quality marine carpet will handle spills.

Have a look for any sharp edges around the exterior of the drawer that could catch on items, and for small gaps that fingers could get caught in. And if your drawer system is to be mounted in the back of a ute, dust ingress is another thing to consider, so you might want a drawer that offers a positive seal when closed. 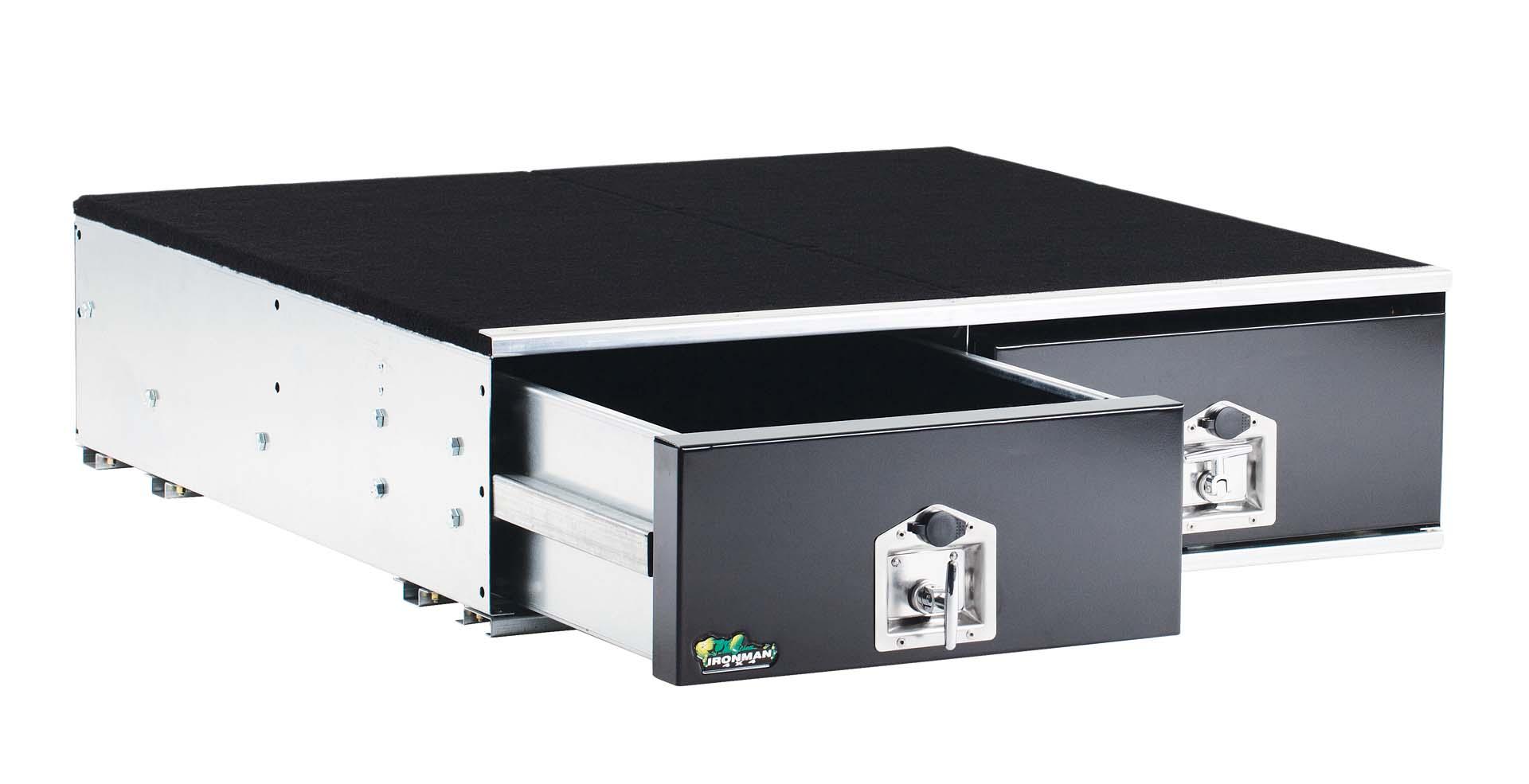 While many drawer systems incorporate a built-in fridge slide, bear in mind that a fridge positioned on top of a drawer can be hard to access. There are a couple of solutions to this conundrum, such as situating the fridge on a slide beside two stacked drawers or fitting a drop-down fridge slide.

Another fantastic accessory for fridges is a fridge cage or fridge box designed to stop items from leaning up against the fridge or falling down behind it when the fridge slide is extended. This provides the necessary ventilation around the fridge so it delivers peak performance, and it allows the slide to be pushed back in without being hindered by luggage.

Drawer dividers and other organisers are a great way to keep the stuff inside your drawers sorted, and there are a number of options on the market.

Depending on the design of your vehicle, there’s often a lot of space around the sides and the leading edge of a drawer system, which can be used for general storage or to fit additional, out-of-sight accessories, such as water tanks, auxiliary batteries, inverters or air compressors. Taps, power outlets and air-hose connections can then be mounted neatly near the side of the drawers for easy access.

No matter what drawer system you opt for, it’ll make packing your vehicle much easier and safer, and provide much better access to gear when you need it.