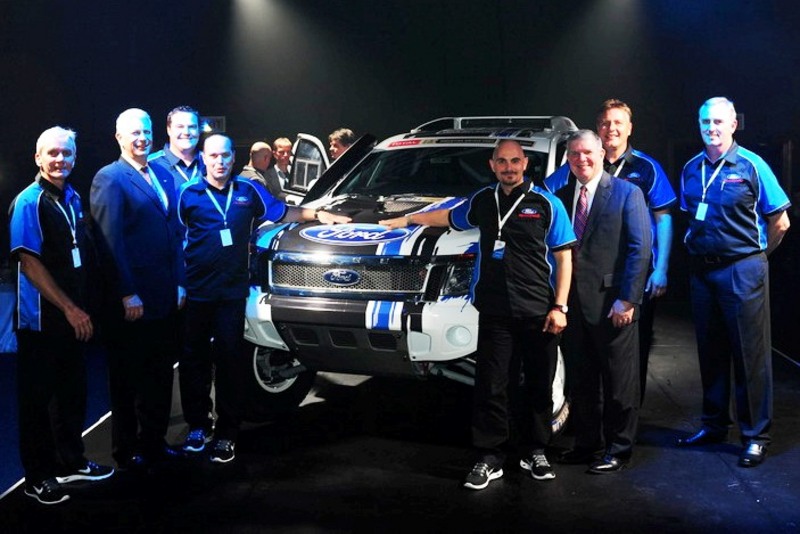 Team Ford Racing' is an all-new South Africa based and backed effort, with Chris Visser piloting one of the specially-prepared 4x4 Rangers, the other to be driven by Argentinian Lucio Alvarez.

The design and production teams for the two Ford Rangers are based in Pietermaritzburg, South Africa. Neil Woolridge Motorsport is handling the build and fitout of these dedicated Dakar challengers, assisted by Ford's global product development group. Logistics for Team Ford Racing will be handled by South Racing GmbH, based in Frankfurt, Germany.

South Racing's logistics assistance in the lead up to, and including, the 2014 Dakar will cover the provision of a pair of fully-equipped MAN 6x6 service trucks and MAN T4 race trucks for the 24 full-time personnel which make up Team Ford Racing.

One of the two Rangers is already complete and will undergo first tests in August. The bespoke nature of much of the Dakar-specific fitout means the second Ranger endurance racer isn't expected to be completed until October. No doubt, the first machine will also be used as a guinea pig in order to eliminate any problems on the second.

For the driving and navigation duties, Ford has assembled crews with a mixture of experience and enthusiasm.

Despite only competing three times, Lucio Alvarez has become one of the leading figures of the race, particularly as a flag bearer for Argentina. In 2013, Alvaraez was sitting as high as third overall in the car category, before mechanical problems saw him drop back to finish tenth. Alvarez finished in 5th place in the 2012 event. Alvarez's regular co-driver, Ronnie Graue, will join him for the new Ranger campaign.

The second Ford Ranger 4x4 has been entrusted to South African, Chris Visser, who will be making his Dakar debut in 2014, together with navigator, Japie Badenhorst. The pair have been successful in the South Africa National Cross Country Championship - the equivalent of our AORC.

South Africa's heritage in the Dakar includes motorcycle pioneer Alfie Cox, and Giniel De Villiers, winner of the 2009 edition in the car category. This year, De Villiers finished runner-up, behind the X-Raid MINI of Stephane Peterhansel. De Villiers's ride this year was a Toyota Hilux-based pickup developed in South Africa, with the assistance of South Racing's Scott Abraham.

The 2014 Dakar rally runs from January 5 to 18, starting in Argentina and finishing in Chile 8,500 kms later. Nest year's event will also visit Bolivia for the first time. Further details at www.dakar.com.