Ford are expanding their Ranger lineup with the imminent arrival of a new variant and an update of an existing variant, as well as improved safety tech on the XLT and the option of the Bi-Turbo four-cylinder engine and ten-speed auto transmission for the XL 4x4 grade. 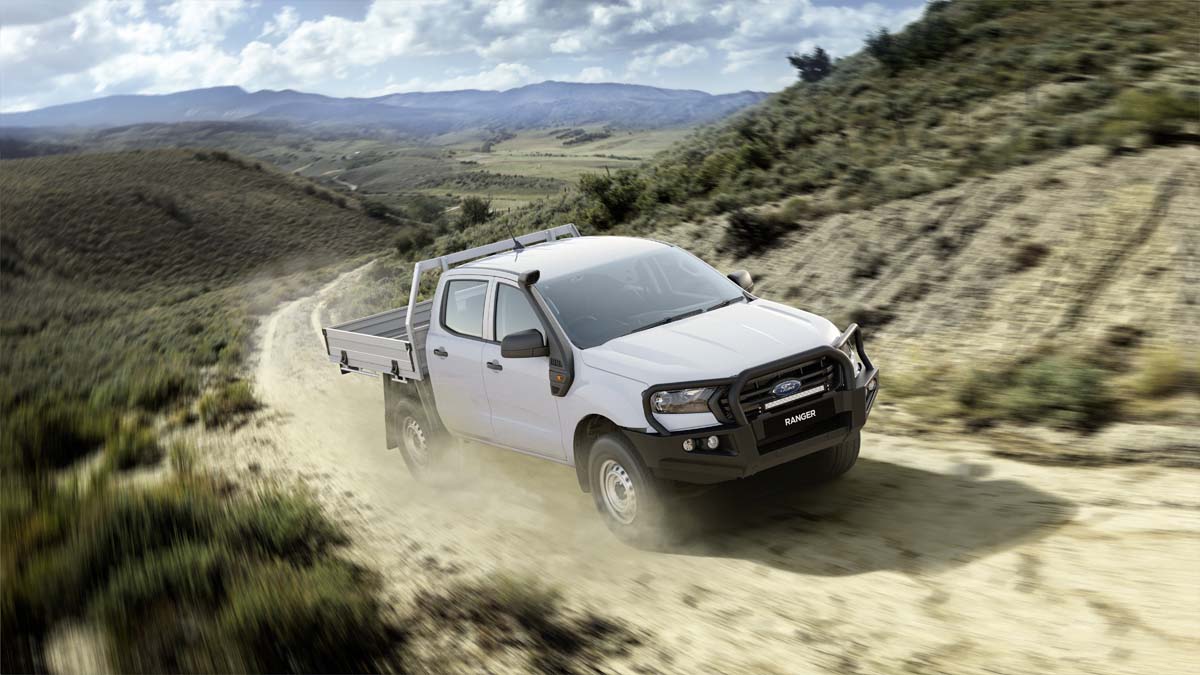 The new variant is the XL Sport 4x2, while the XL Heavy Duty Special Edition 4x4 is being upgraded with more standard features. Both should be in Ford dealerships by July.

“Ranger has been designed and engineered in Australia, and our harsh continent is an ideal

“With the new XL Sport and 4x4 XL Heavy Duty Special Edition variants, we’re working hard to ensure that tradies and businesses all across the country have the right equipment and support to get on with the job.”

Available exclusively as a dual cab chassis in Arctic White, with the 3.2-litre five-cylinder turbodiesel engine and six-speed auto, the XL Heavy Duty Special Edition has previously been offered, but with some of its more desirable features split across different extra-cost option packs. In response to customer demand, these various features have now been standardised.

To the XL dual cab 4x4 base, Ford adds a number of factory-fitted extras, including a Genuine Ford steel bullbar which comes with an LED light bar as standard, as well as integral mounting points for auxiliary lights and a UHF antenna. This factory bar retains the XL’s AEB with Pedestrian Detection function.

A Genuine Ford snorkel is part of the new XL Heavy Duty Special Edition, too, along with black side steps and black 17x7.5-inch steel wheels with solid wheel nuts and Continental CrossContact All-Terrain tyres.

The heavy-duty suspension comprises new and thicker springs with a revised spring rate and new dampers front and rear. Designed to improve the Ranger XL’s ride under heavy load, the new suspension package comes with specific tuning of the ABS and ESC to suit.

Based on the XL dual cab ute and offering a claimed $4,500 in extra features over that grade, the new XL Sport 4x2 takes styling cues from the XLS Sport grade, but is almost $10,000 cheaper.

Along with these new and updated grades, there have some minor updates made to other grades within the Ranger family, specifically certain variants of the XL and XLT.

Turbo powertrain, while adding Adaptive Cruise Control as standard to XLT, a decision

based on customer feedback and Ford Australia’s desire to continually improve our product,” Birkic added. “These additions will make Ranger even more convenient for those who spend a lot of time on the road.”

The Ranger XLT now includes Adaptive Cruise Control as standard across all body styles and 4x2 and 4x4 variants. Previously part of an optional Tech Pack, standardising ACC on the Ranger XLT is designed to improve this grade’s safety, convenience and value, according to Ford. However, it’s unclear whether the standard ACC includes the Forward Collison Warning function it featured when it was optional.

On the Ranger XL grade, the 2.0-litre Bi-Turbo four-cylinder engine is now available as an option to the existing turbodiesel 2.2 four- and 3.2 five-cylinder engines on selected variants. Previously limited to the Ranger Raptor, the 2.0 Bi-Turbo is now filtering down to other grades, first on the XLT and now the XL. Combined exclusively with a ten-speed automatic transmission, this performance engine is only available with four-wheel drive and limited to the XL Super cab chassis, dual cab chassis and dual cab ute body styles.

The increased performance – 157kW and 500Nm – and reduced fuel consumption from the 2.0 Bi-Turbo come at the expense of reduced payload capacity, but braked towing capacity is unchanged at up to 3500kg (check with your Ford dealer for specific numbers).

Pricing for these model grade updates had not been revealed at time of writing.

The MY21 Ranger upgrades and new additions are due for roll-out from late June. See your Ford dealer for details.