At the beginning of the new millennium, Jeep created a vision of their future in the form of the ‘Willys2’ concept.

By the early 2000s, the SUV boom was in full swing, especially in the USA, with all American car manufacturers offering vehicles that combined the looks of a go-anywhere 4x4 with softer suspension and suburban practicality.

Jeep was not immune to this, and while they still ruled the roost as far as bona fide 4x4s went with vehicles like the Wrangler, they had softened their range to suit the needs of the suburbs, too. 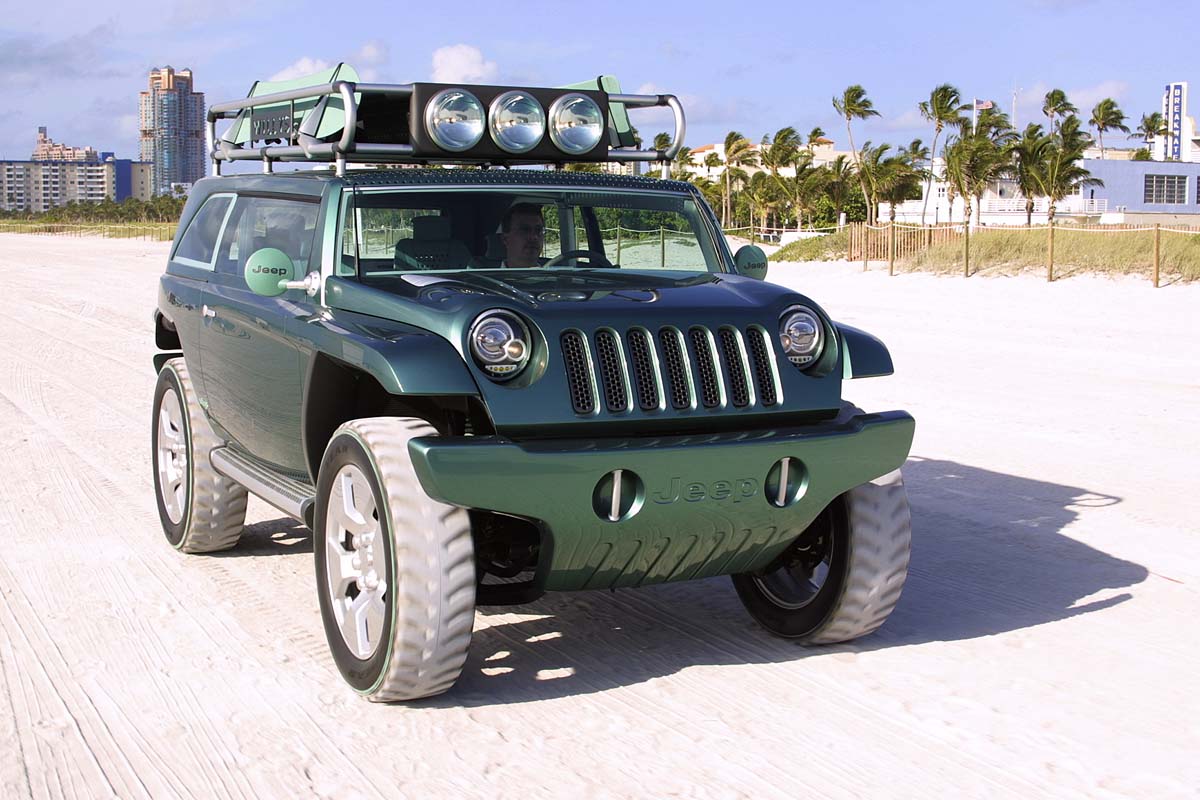 Jeep’s position as America’s pre-eminent off-road brand had been challenged on occasion in the past, by the likes of International with their Scout, Ford with their Bronco and Chevrolet with the Blazer. Jeep had managed to beat – or at least match – all these rivals and remained the most recognisably rugged and off-road-ready brand in the US.

However, in the late 1990s, a fresh threat emerged from General Motors with the ‘Hummer’. 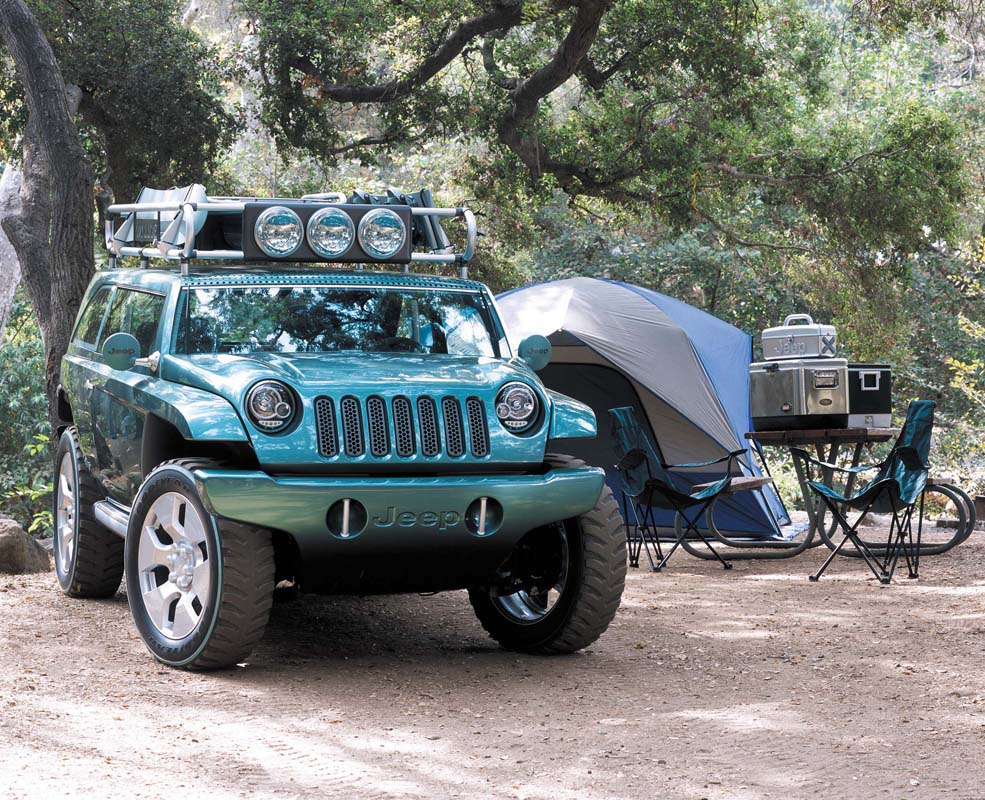 Originally known as the HMMWV (High Mobility Multi-Purpose Wheeled Vehicle), the Hummer had been exposed to the world through its role in the first US v Iraq Gulf War earlier in the ‘90s. Consumers, especially in the USA, clamoured for a civilian version of the tough military vehicle, despite its impracticalities for use outside (and some would say, inside) a combat zone.

Seeing the demand for the Hummer, GM thought they could expand that demand with a more civilian-friendly, but still rugged, version of the original. After purchasing the Hummer brand from AM General in 1998, GM set about expanding the market reach of the original (now known as the ‘H1’) and adding a companion in the ‘H2’, with the plan to bring the latter to market in 2001.

Jeep felt this would be a direct incursion into their territory, so looked at their existing range and thought that developing a companion of their own, priced below the Wrangler and with the same off-road ability but better fuel efficiency, was the way to go.

To test the market’s interest in such a new companion, two concept off-roaders were developed by Chrysler’s Pacifica Advanced Design Center in California and presented to the public in 2001 – the ‘Willys’ and ‘Willys2’.

The Willys name for these concepts referenced the very origins of the Jeep brand in the form of the Willys MB military general purpose vehicle from World War II.

Both concepts featured some signature Jeep styling cues, like large round headlights, angular wheelarch openings and a seven-slot grille, but also incorporated current Chrysler Group styling trends, like large wheels and bulky-looking, slab-sided bodies with a narrow glass area. These would find their way not only onto Jeeps of the era, but also Chryslers, like the reinvented 300C sedan that debuted in 2004.

Colours and finishes on the Jeep concepts, including the use of translucent plastics inside, showed the influence of Apple products of the era, particularly the iMac computer.

While no-one could mistake these concepts for anything other than a Jeep, the point was reinforced with ‘Jeep’ stamped into the front and rear bumpers. 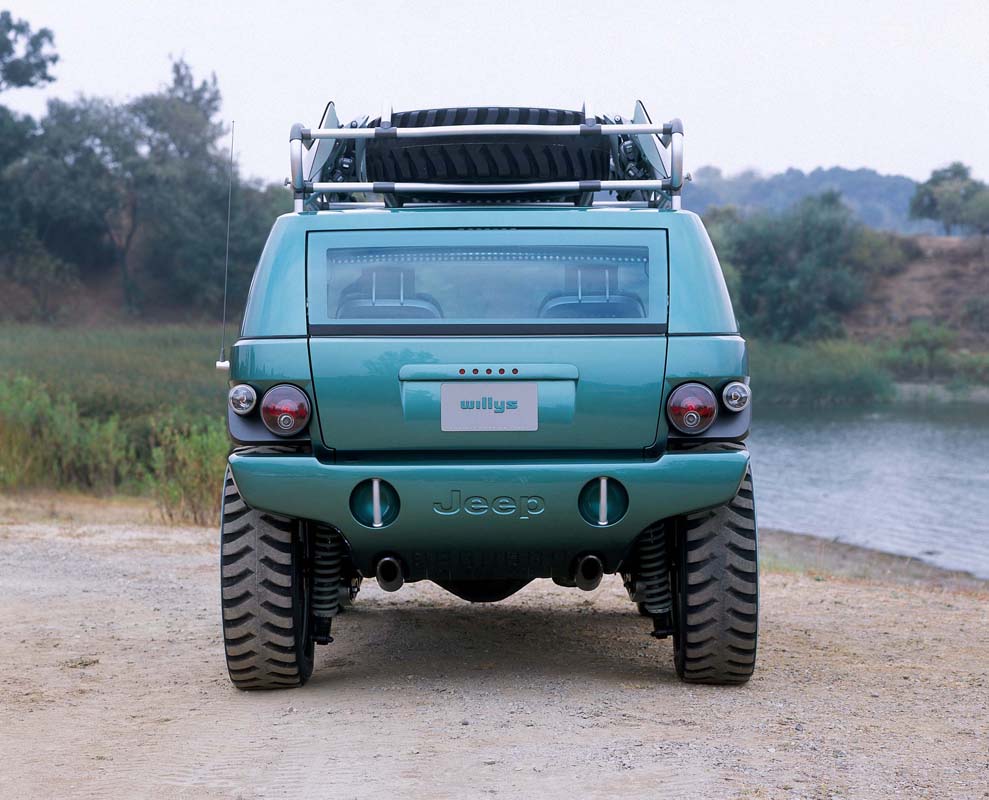 Sharing these bumpers and other external design features, the Willys and Willys2 concepts looked almost identical from the waistline down (the Willys2 may have even been built off the Willys), but where the former was an open-top vehicle, the latter incorporated a removable hardtop. Wheel designs were different across the two concepts, too.

While the Willys concept made its debut at the 2001 North American International Auto Show in Detroit, Jeep’s parent company at the time, Daimler-Chrysler, chose to unveil the Willys2 at the Tokyo Auto Show later that year.

Why Daimler-Chrysler chose Tokyo is unclear, as Japan was hardly a strong market for Jeep at the time. 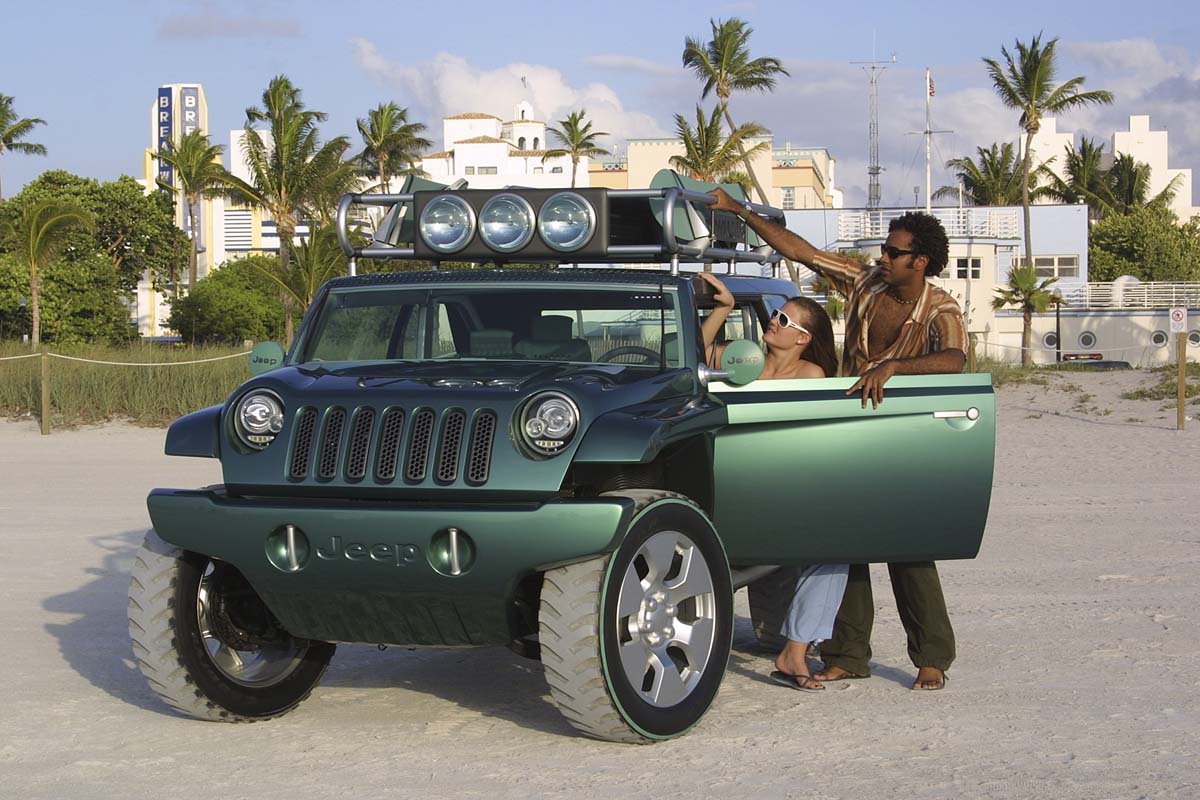 What was unveiled at Tokyo was a bold, high-riding 4x4 finished in a metallic emerald colour dubbed ‘Action Green’ and offset with machined metal finishes on the wheels, sidesteps and other exterior details.

Along with their Jeep identification, the aforementioned bumpers also incorporated tow loops, but rather than project from the bumper, they were recessed in, with their round shape picking up on the head and tail light designs.

As with the Willys concept, the wheelarch openings on the Willys2 were inspired by the original Willys MB and allowed plenty of travel for the 21-inch wheel and tyre package. 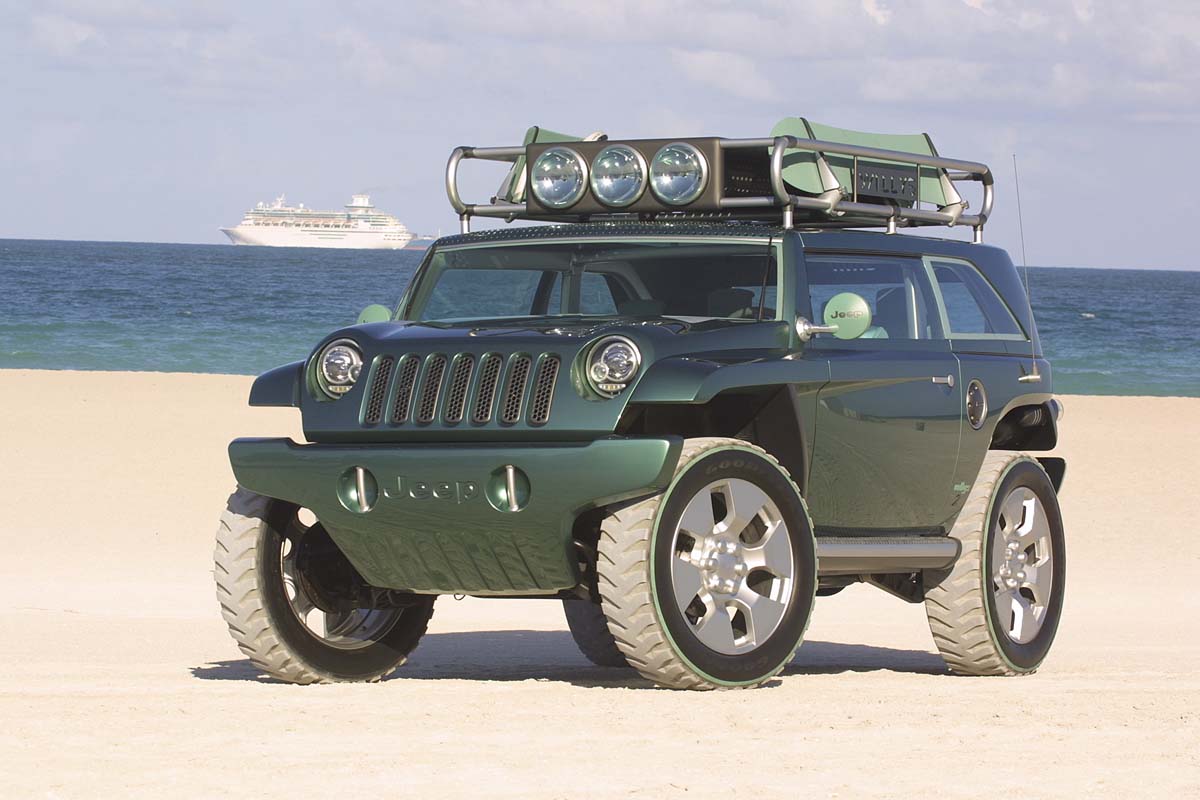 Where the Willys2 differed most from the Willys was above the waistline, where a removable hardtop was fitted. On top of this there was a full-size roof rack that carried the spare wheel, a storage bin and numerous pieces of off-road gear and lifestyle equipment. It served a mount point for three jumbo-sized spotlights, too.

Willys identification featured on this roof rack and more subtly on the rear quarters.

Ground clearance was 309mm, and while approach, departure and breakover angles weren’t listed, overhangs were stubby - 577mm at the front and 627mm at the rear.

Unlike a lot of concepts, the Willys2 was a functional, drivable vehicle, with “real world” drivetrain, suspension and chassis componentry underpinning its futuristic looks.

The engine was a 1.6-litre supercharged petrol four-cylinder, producing a claimed 120kW and 210Nm, which could reach 100km/h from standstill in around 10 seconds and hit a top speed of just under 145km/h. 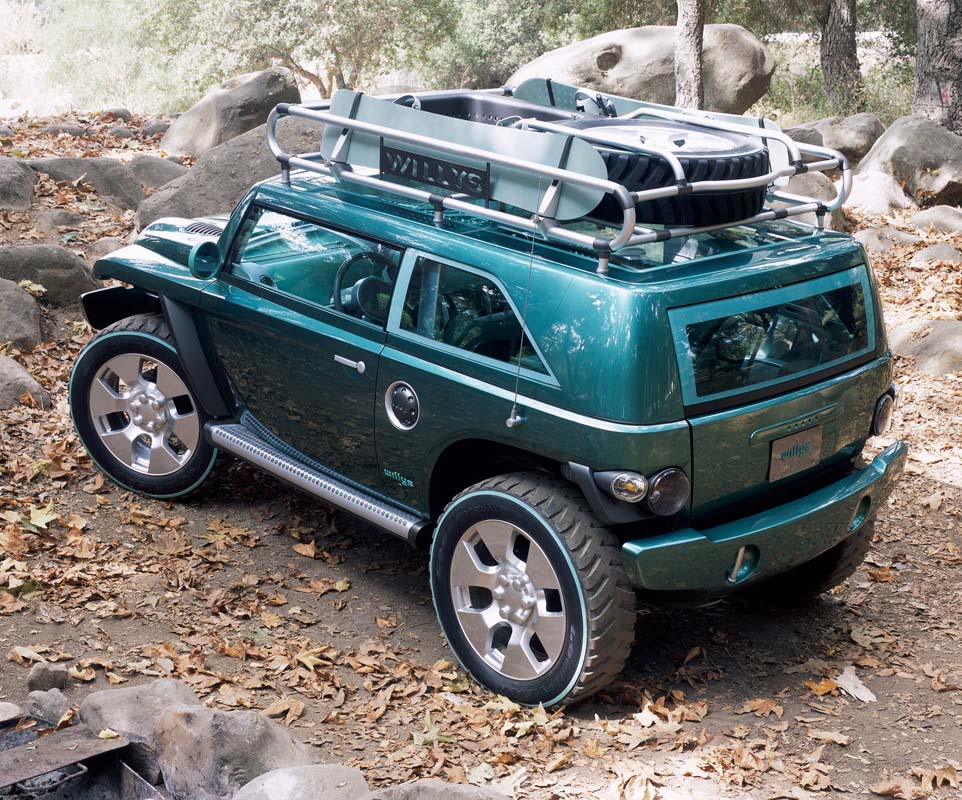 The Willys2 was more about off-road capability than straight-line performance, though, so the engine, along with the four-speed automatic transmission, was designed to push the concept through mud and sand, over rocks and across rivers.

To achieve this, four-wheel drive with low range was standard, while the suspension package consisted of an independent front end with custom short and long A-arms. At the rear, a multi-link set-up was used on a solid axle, with coil springs all round.

The futuristic approach to the Willys2’s exterior continued inside, with a very minimalist approach, too.

The steering wheel was largely conventional, but there was no instrumentation ahead of the driver - just a swathe of translucent green plastic that was repeated on the passenger side. Atop the dash, concave sections on each side featured cords, presumably to hold small items in place, as there was no glovebox.

What instrumentation there was consisted of a large analogue speedometer placed centrally in the dash, with two smaller gauges, for the tachometer and fuel/temp, either side. Below this were controls for the fan and heater. Presumably, there was a stereo somewhere, too, as speakers were visible in the doors.

On the transmission tunnel, the parking brake was conventional, but the selectors for the four-speed auto and high-low range were styled like marine throttle controls.

With room for four occupants, the Willys2 included race-style seats with four-point harnesses and what appeared to be leather upholstery with 'Jeep' branding.

The floors and doorcards were as simple as the rest of the interior, with Jeep explaining that this utilitarian approach meant the inside could be hosed out after a day in the dirt.

The fact the Willys2 is unremembered today has a lot to do with the circumstances behind its introduction. The 2001 Tokyo Motor Show was held a month after the September 11 terrorist attacks, so the focus of Americans - and many others around the world - was understandably elsewhere.

As a range expander priced under the Wrangler and offering similar off-road capabilities, the concept didn’t come to fruition. Instead, Jeep moved the Wrangler up in terms of price and released the Compass and Patriot in 2007 at the Wrangler’s old price point. While both were all-wheel drive, neither were really in the spirit of the Willys2 concept. 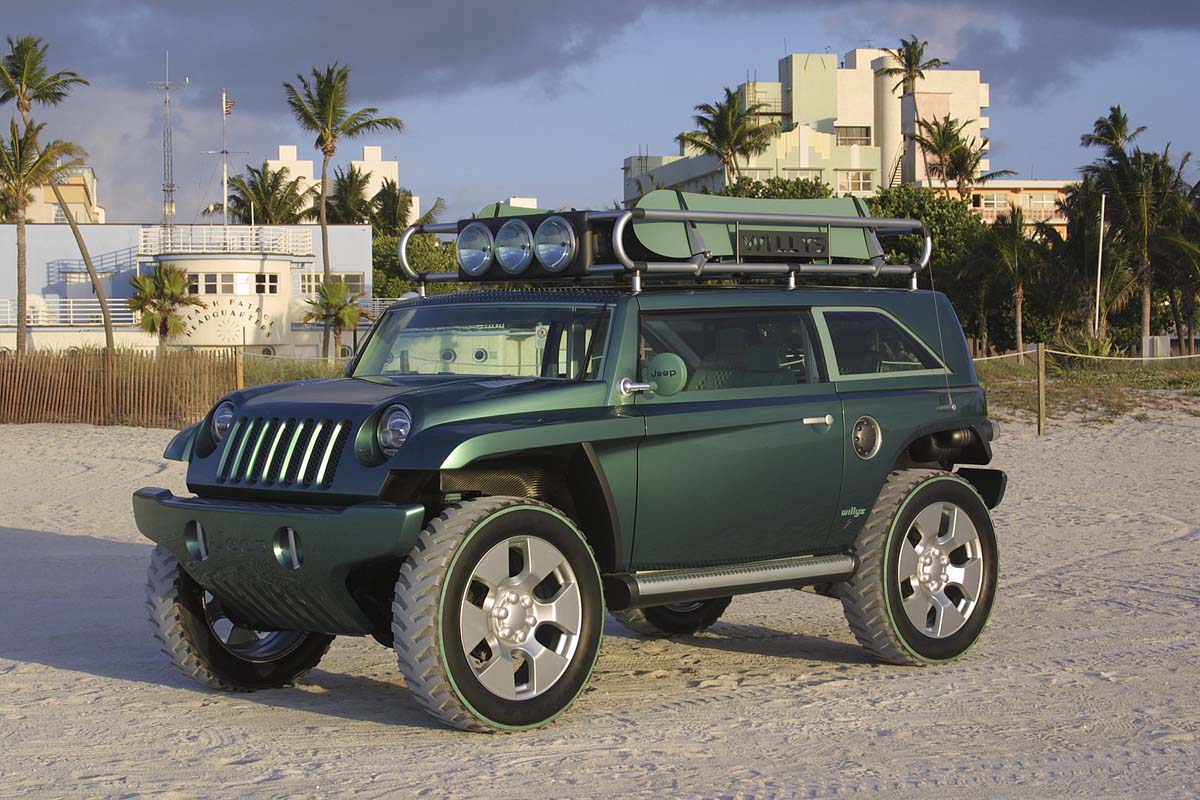 Just as circumstances would diminish the Willys2’s impact when it arrived, circumstances later that decade, in the form of the Global Financial Crisis, would eliminate the Hummer as a threat to Jeep’s dominance of the US 4x4 market, thus eliminating the need for a rugged, go-anywhere model priced under the Wrangler, too.

However, Jeep went ahead and released such a vehicle, anyway, with the Renegade crossover arriving in 2014 and boasting genuine off-road capability in Trailhawk form.

Now, more than a decade later, Hummer is back as an EV and Jeep are diving into the EV space, too.

So, will Jeep create another concept like the Willys2?

The automotive landscape has changed a lot since the Willys2 appeared, with traditional motor shows on shaky ground and Jeep choosing the annual Easter Jeep Safari to present new concepts. These are mostly showcases for accessories, though, not predictors of future tech and styling, so a new concept in the vein of the Willys2 seems unlikely.

That being said, Jeep have called on their Willys heritage for limited-edition production models and will certainly tap into that history again in the future.