Toyota took their US market Tacoma pickup and turned it into a retro-inspired camper for SEMA.

Of all the one-off factory customs unveiled at the 2021 SEMA show, the most interesting was undoubtedly the Toyota ‘Tacozilla’ Tacoma Camper. Based on the mid-sized (in US terms) Tacoma TRD Sport pickup, the Tacozilla is a modern take on Toyota aftermarket camper conversions that were popular in the US in the 1970s and early ’80s.

In case you’re wondering, the Tacoma is nicknamed ‘Taco’ in the US, which led to the ‘Tacozilla’ name for this concept. 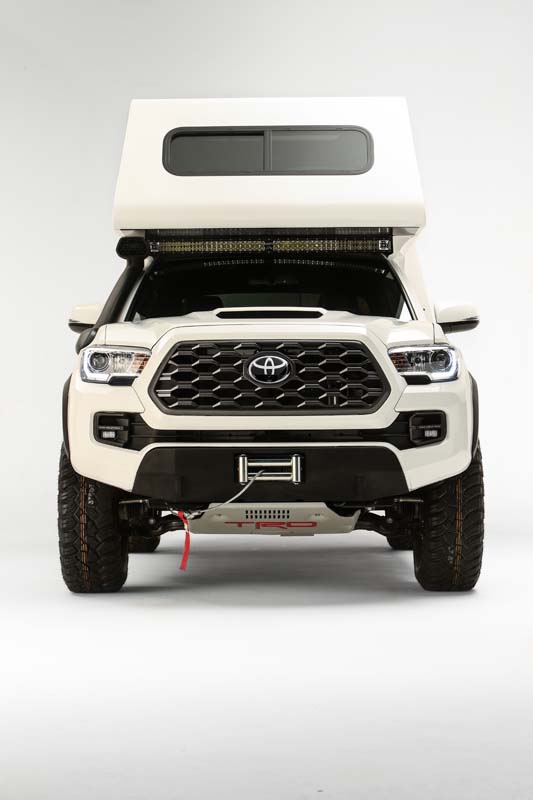 For the record, the Tacoma is essentially the North American version of the HiLux, built on the same platform and being of roughly the same dimensions, although a little wider. Styling differs (although the two are becoming more and more similar), as do body offerings, with no single cab chassis for the US market – only extended cab (as used for the Tacozilla) and crew cab.

Drivetrain options differ, too, with the Tacoma missing out on the 2.4 turbodiesel four-cylinder that’s available on the Aussie HiLux, but the US does get a 3.5-litre petrol V6 that’s not an option for the Australian market.

So, with that knowledge in mind, the Tacozilla camper conversion could feasibly be applied to a HiLux, should Toyota ever decide to move the thing beyond a one-off concept. 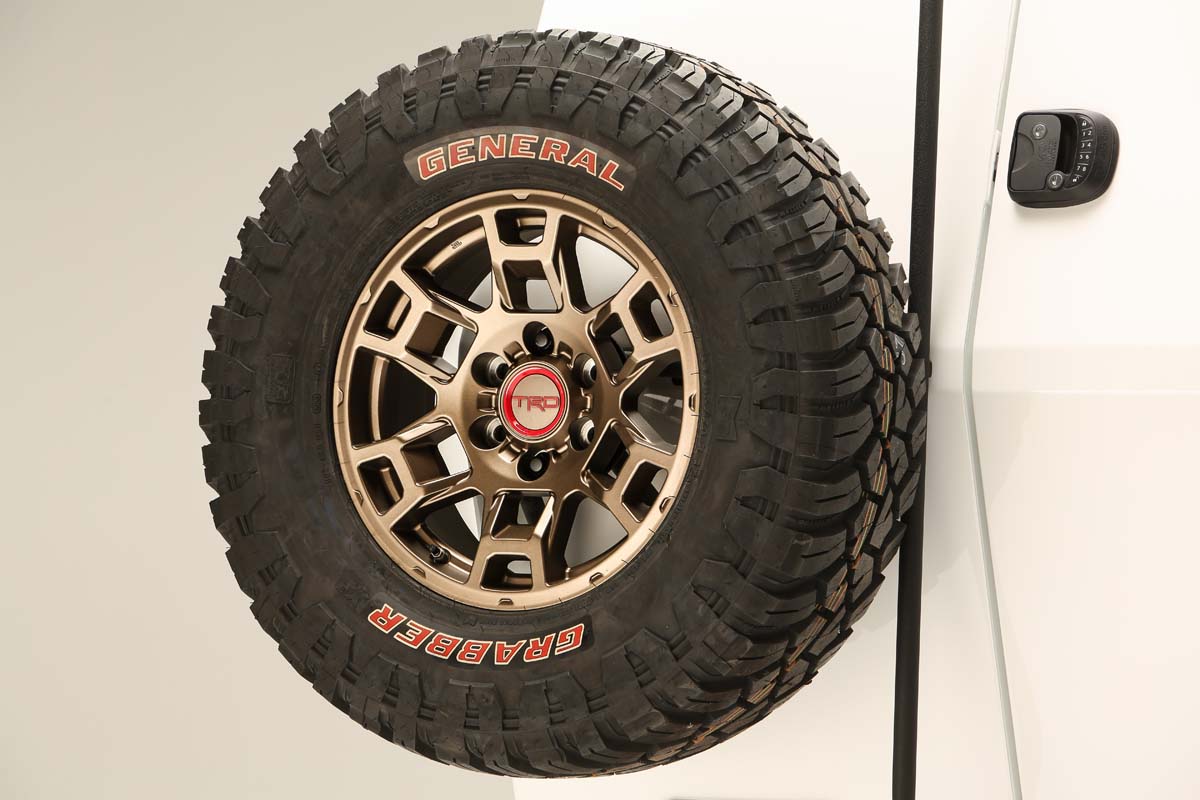 The Tacozilla was one of several vehicles Toyota debuted at SEMA, but it’s the one that easily grabbed the most attention. And unlike some SEMA creations, the custom camper is fully functional, with working fittings and fixtures, while the Tacoma base vehicle uses mostly stock and accessory Toyota/TRD parts.

When referring to the Tacoma, Toyota also talk about “downsizing” which seems odd for a vehicle this large, but remember, the Tacoma is a mid-size truck in US terms, sitting below the full-size Tundra (a rival for the Ford F-150) in Toyota’s North American lineup, so in that context, it makes more sense.

Apparently, downsizing, as evidenced by a resurgence in the mid-size pickup market and a fad for “tiny houses,” is something of a trend in the US at the moment.

Learning on the Go

The Tacozilla was designed and built at Toyota Motorsports Garage (TMG) in the US, with support from Beree Cox Design, Cripwerks and Complete Customs.

Under a team led by TMG’s Director of Operations, Marty Schwerter, the build started with removing the tub from a new Tacoma TRD Sport extended cab 4x4 to see how much space they had to work with and what could be removed or relocated to allow standing room – even for someone 6 feet tall - in the rear.

“The team needed to go below frame height in order for a person to be able to stand up inside,” Schwerter said.

The next step was roughing out a basic camper frame that didn’t project too far from the Tacoma’s existing dimensions at the sides and the rear, which would impact side clearance and departure angle on off-road trails. However, to ensure that important standing space, TMG did go big in the camper’s height.

Another consideration was style. 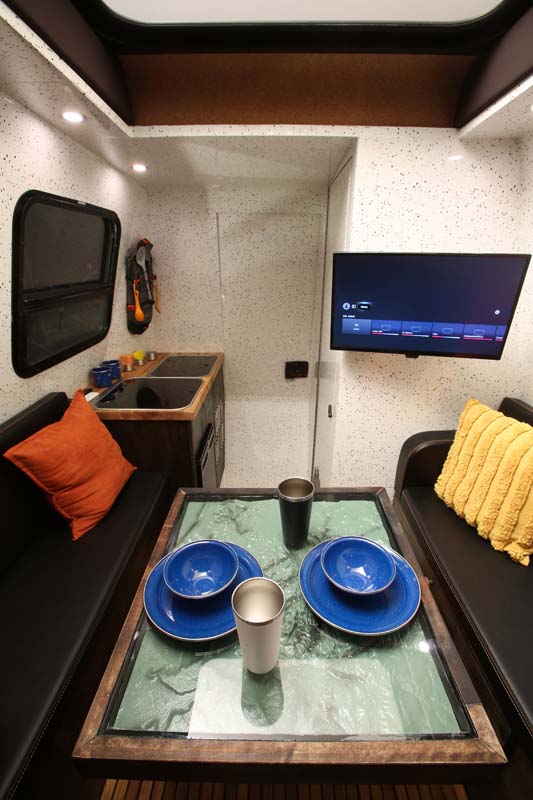 “Our goal was to build a vehicle that is engineered correctly but also made to look really cool,” Schwerter added. “Being around race cars my whole life, race cars are cool looking. I want campers to be cool looking, too.”

That meant, as Schwerter put it, a boxy “refrigerator on the back of a truck” wouldn’t cut it. It was important that the camper complemented the Tacoma’s styling, so the team picked up on the Tacoma’s hexagonal grille and applied it the camper’s shape.  Slightly bowed at the sides and rear, this approach adds a little more room inside, too. 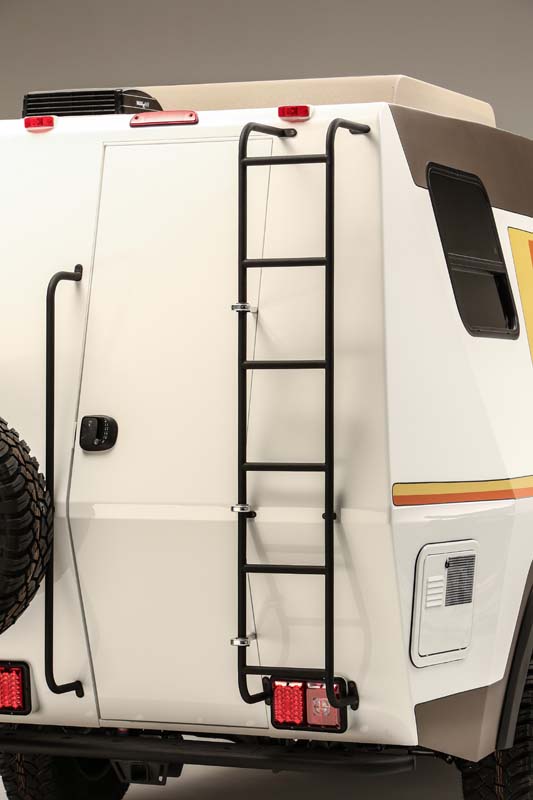 Schwerter believes that the rounded edges and smooth surfaces on the camper complement the Tacoma’s body lines, while looking more integrated and finished. And it's worth noting that, while the camper body looks like it’s made from fibreglass, it’s all sheet aluminium on a steel frame.

As good as it looked, the hexagonal shape presented a significant challenge in mounting the rear access door. The team could have fitted a flat door but decided the result would not suit the overall design. As such, over 100 hours were spent designing the rear door alone, much of which involved fabricating and fine-tuning hinges that are slung off the roof access ladder. 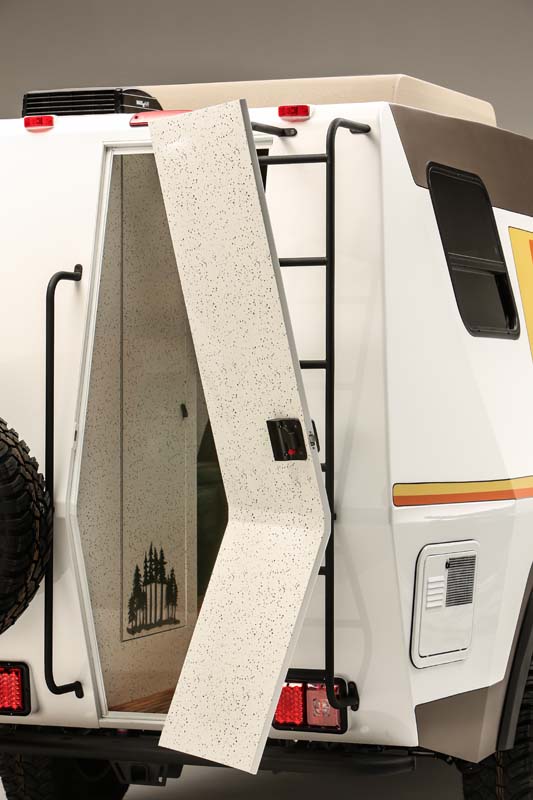 The next challenge was allowing access to the camper area from within the cabin. Of course, no such feature exists on a Tacoma in its stock form, so an opening had to be made. In turn, this required bracing for the cabin, ensuring it remained rigid during demanding off-road driving.

It’s also why the camper is fixed directly to the Tacoma’s body, rather than just being bolted on to the chassis. According the Schwerter, the cabin and camper structures work together and twist on uneven surfaces without compromising the vehicle or creating unsafe situations when off-roading. 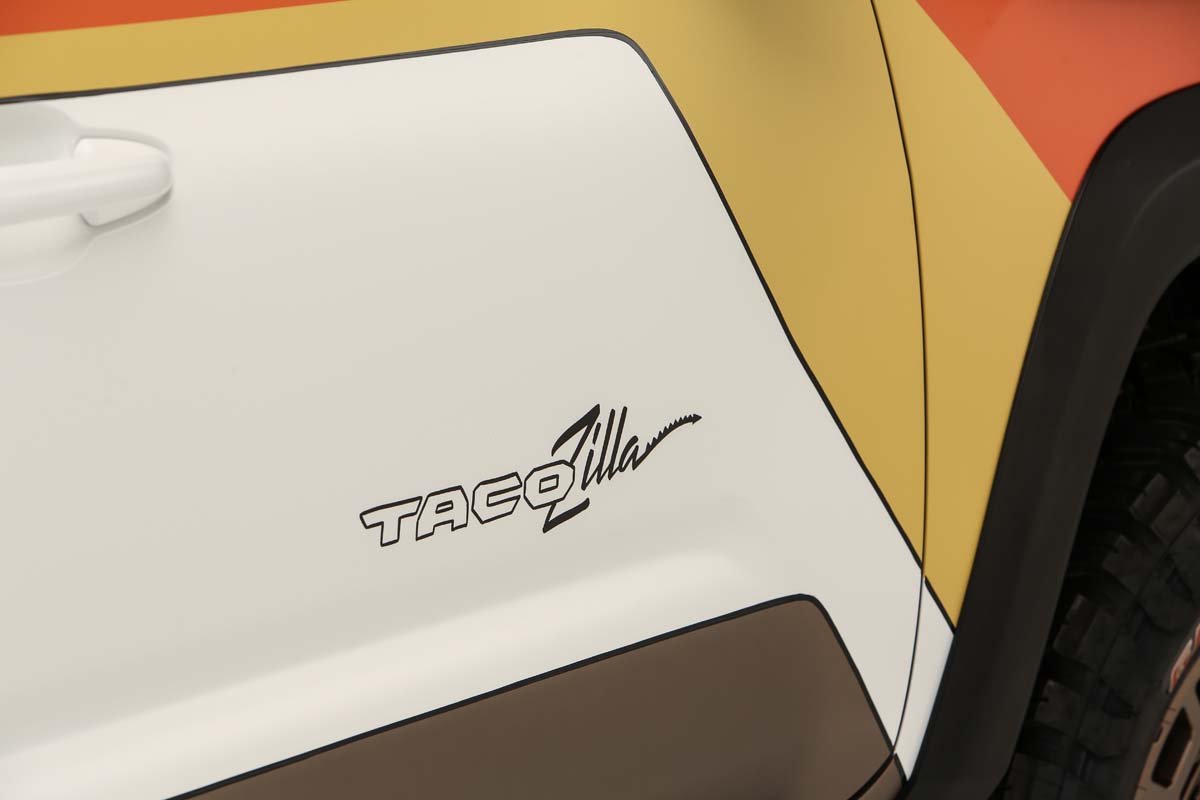 Some other practicalities for this concept’s purpose included adding a second battery, an isolated fuel filler (to eliminate fuel fumes entering the camper interior) and removing the rear seats in the extended cab for easier access to the camper.

The Tacoma driveline has been left mostly unchanged, made up of a 3.5-litre petrol V6 producing 278hp and 265 lb/ft (207kW and 359Nm) and six-speed manual transmission, but there is an MTC custom exhaust that exits ahead of the rear wheels and the aforementioned second battery that’s incorporated into the engine bay.

Disc/drum brakes are unchanged from factory and the suspension is virtually stock, too, aside from the lift and the addition of TRD billet upper control arms. 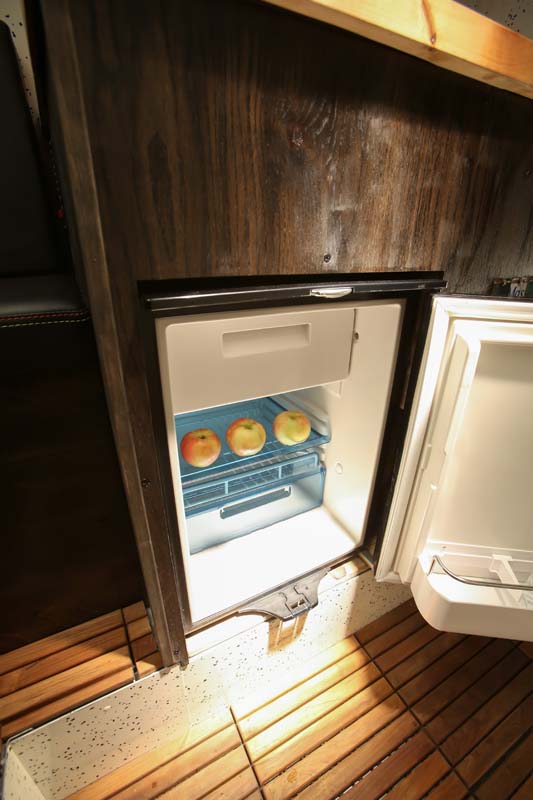 Home on the Road

With Tacozilla’s body shape sorted, attention turned to the camper’s interior fitout. Complete Customs, a longterm Toyota partner, come on board at this point.

Inside the fully-insulated shell is a 2-person bed that extends over the Tacoma’s cabin, behind which are a pair of couches and removable dining table.

Aft of these is a kitchen set-up with a sink, fridge and two-hob cooker on one side and a wet room with chemical toilet and hot water shower on the other. It makes for a bit of a narrow entry at the rear, but is packaged well. 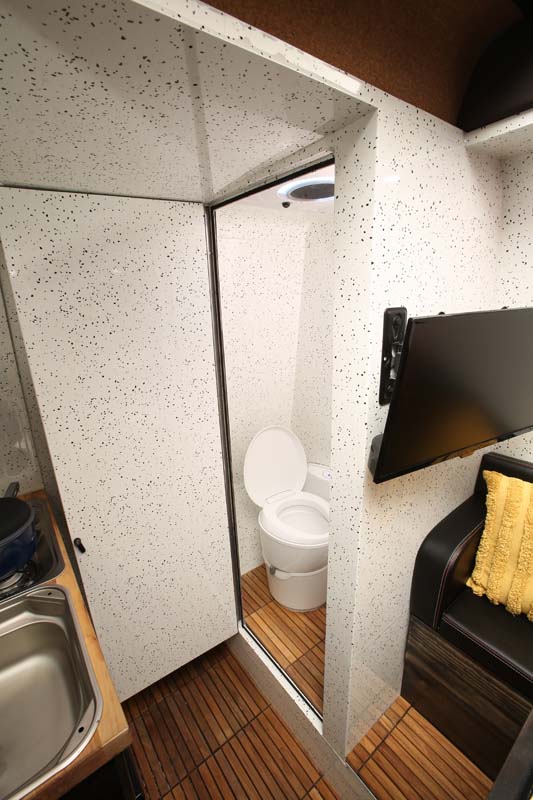 A flatscreen TV is mounted in the lounge area and there’s storage space under the couch seats. Timber finishes feature here, as well as on the kitchen area’s benchtop, with sauna-style teak flooring used throughout.

The dining table features a 3D-printed relief map under glass and is designed to be mounted on the wall as a piece of art when not in use. 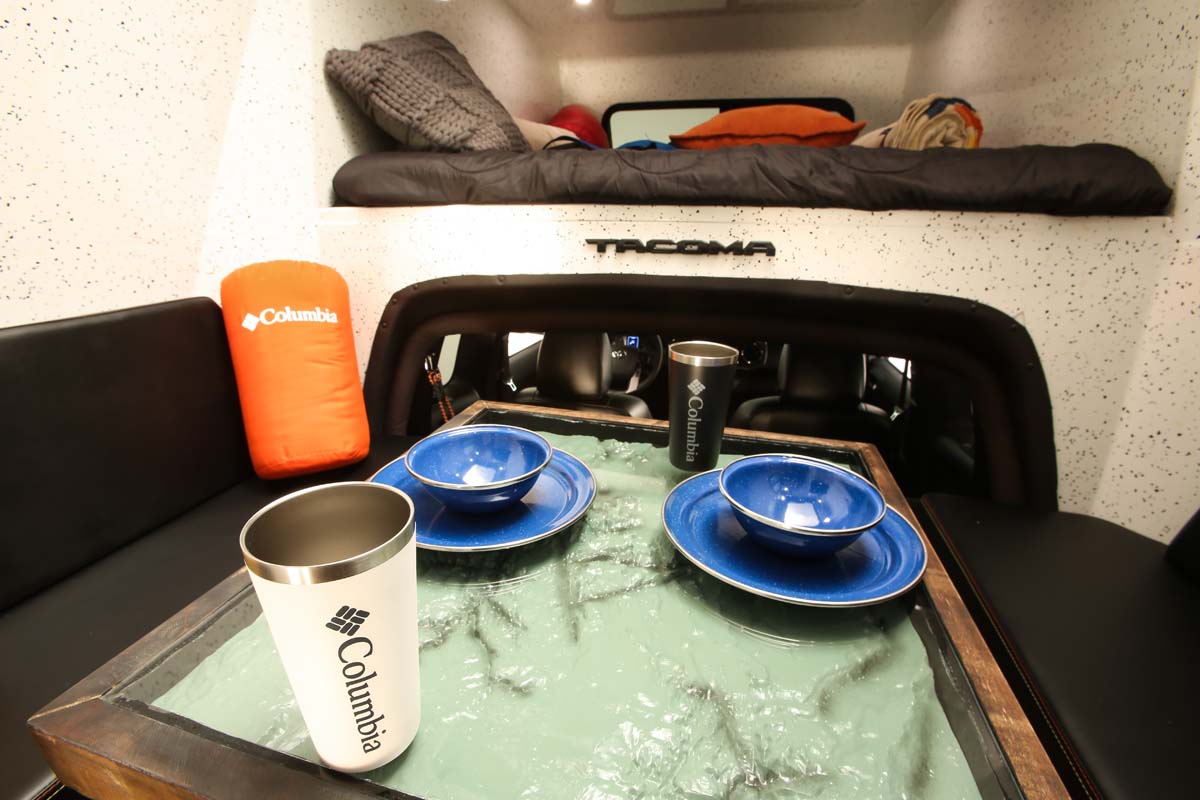 The interior walls have a terrazzo finish, while a large - 4’ x 4’ (1.2mt x 1.2mt) - skylight allows abundant light to flood into the living space while maintaining privacy.

Apparently, the pop-up skylight was a late addition to the build, designed to allow even more interior headroom than initially planned.

Columbia Sportswear helped with the interior fitout and provided some of the furnishings used.

In the Tacoma cabin, storage for camping gear replaces the rear seats, while the front seats feature custom-stitched leather trim. 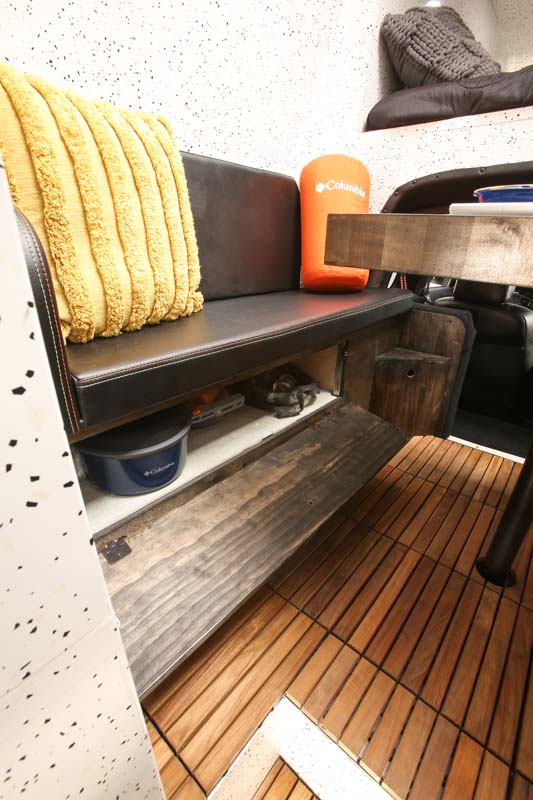 As well as advising the TMG team on Tacozilla’s interior, Complete Customs also handled the paint.

The yellow/orange/bronze exterior striping and bronze upper and lower sections aren’t random touches; they actually pay tribute to Toyota pickup-based camper conversions that were produced by a US company called Chinook in the 1970s and ’80s. 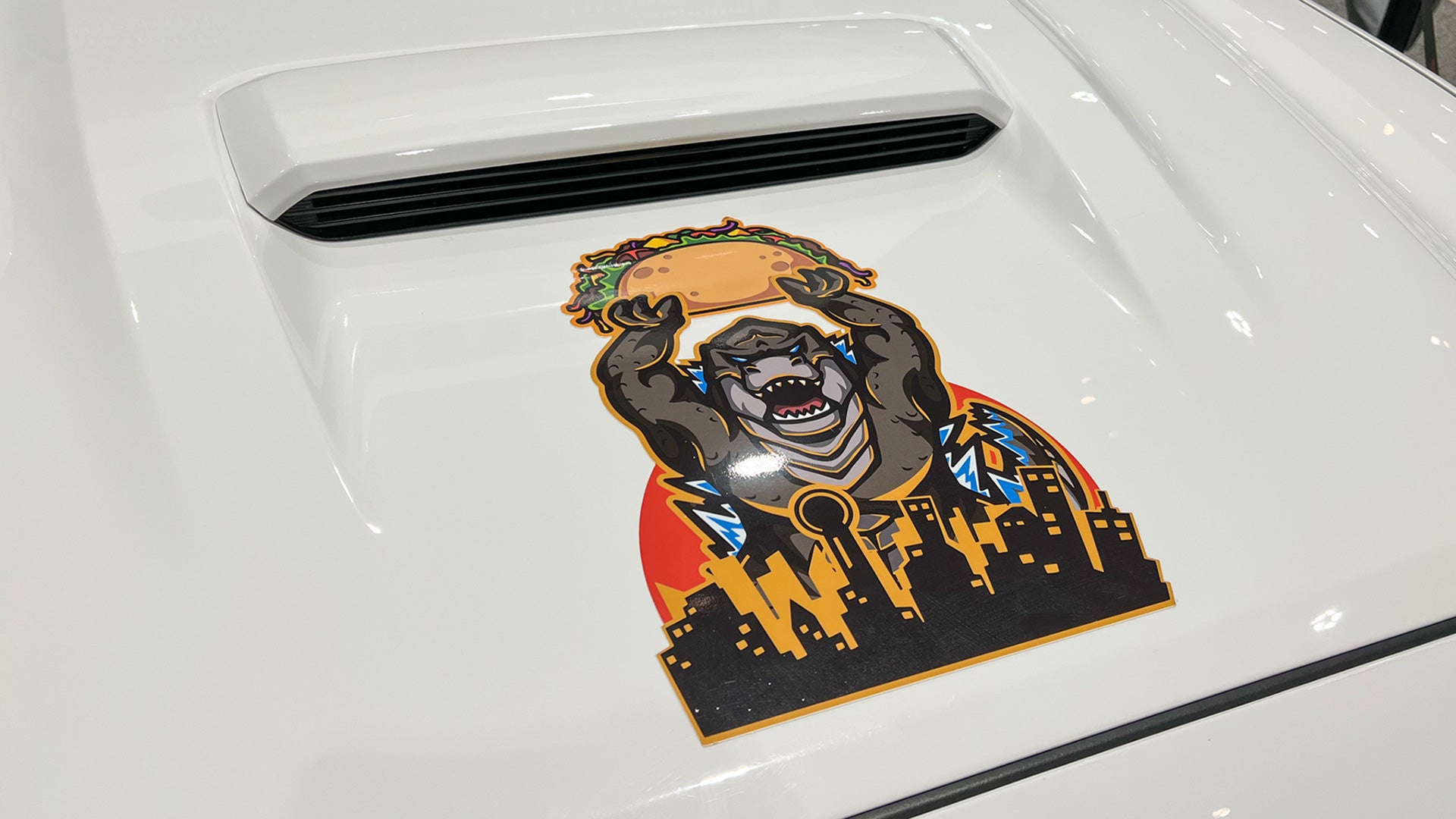 The bronze toning on the body is complemented by the same finish on the wheels, while the concept’s name is acknowledged with a cartoon graphic on the bonnet - of Godzilla holding a taco!

Finishing touches include a spare wheel on an external mount, a shortened TRD snorkel, TRD skid plate up front and a Rigid light bar above the cabin. On the front bumper, there are Rigid fog lights, a Warn winch and tow hooks. 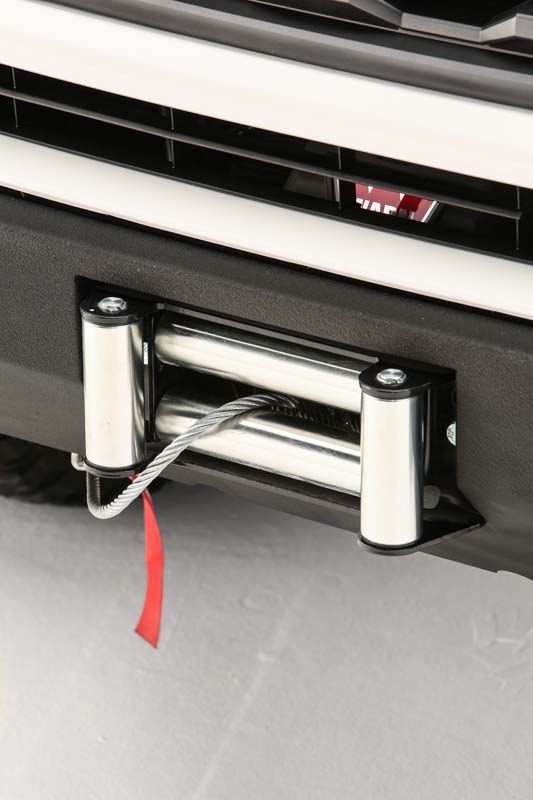 Built to go just about anywhere and celebrating Toyota campers of the past, the Tacozilla Tacoma Camper was a showstopper at SEMA, so expect it to do the rounds of overlanding expos and other outdoor events in the US throughout 2022.