Kia explores the potential – on and off road – of their Seltos compact SUV with a pair of themed concepts. 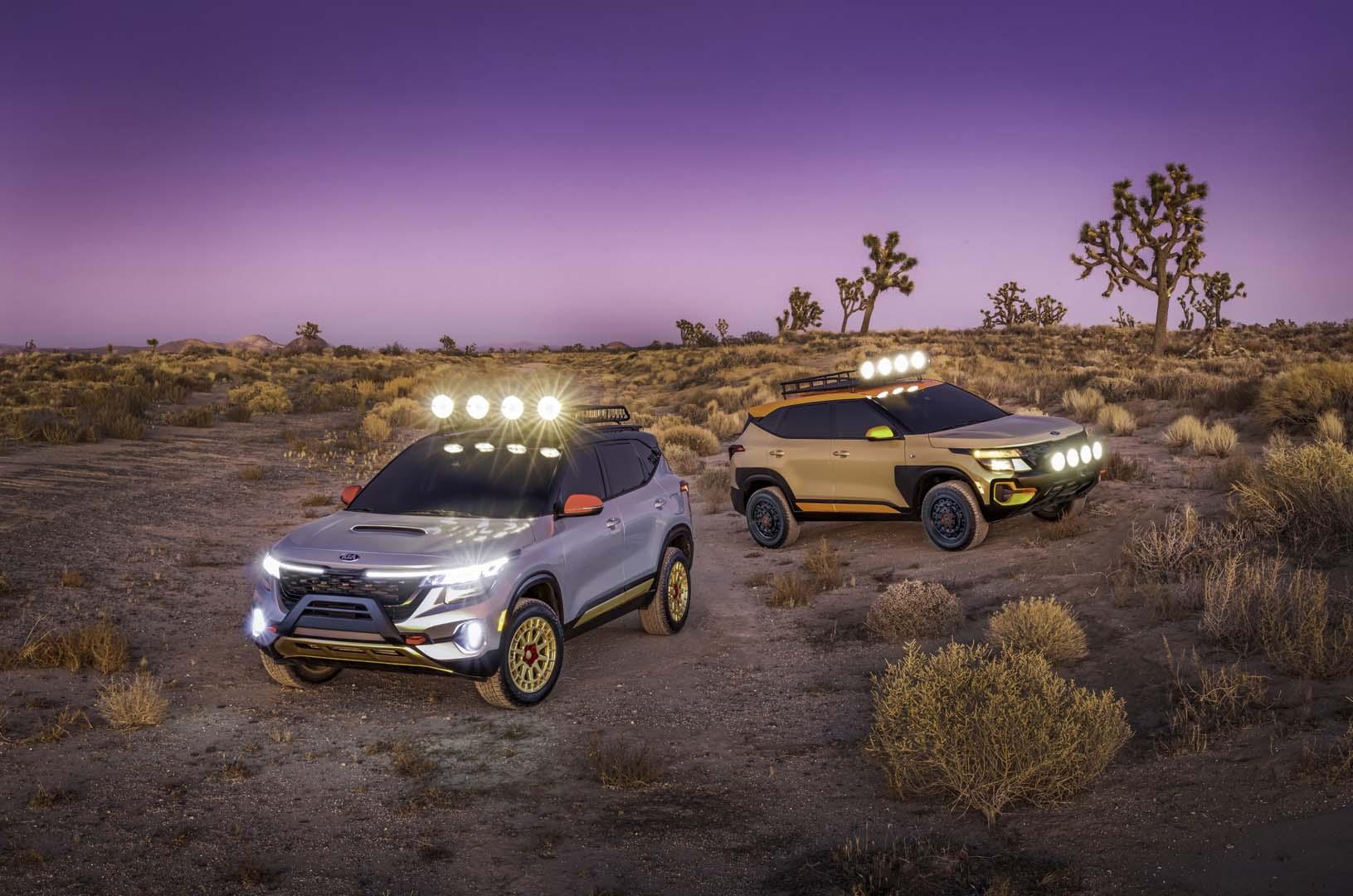 Kia’s Seltos is a new addition to the Australian SUV market and it hasn’t even reached showrooms in the USA yet, but that hasn’t stopped Kia from exploring the small SUV’s potential with the presentation of a pair of concepts at last November’s Los Angeles Auto Show.

Launched globally in South Korea last July, the Seltos is Kia’s first small SUV. Sized and priced below both the Sorento and Sportage SUVs that Australian Kia buyers are familiar with, the Seltos is aimed primarily at the Hyundai Kona, Toyota C-HR and Honda HR-V.

Offered in S, Sport, Sport+ and GT-Line grades here, the Seltos has already resonated with Aussie buyers, as between its late-October launch and the end of 2019, Kia sold just over 2,000 of them, with 971 sales in December alone.

While the stock Seltos is clearly an urban-oriented SUV, with AWD only available on the top-of-the-line GT Line variant, both of the LA Auto Show concepts feature all-wheel drive, aiming to present the new SUV as capable of taking on trails beyond the suburban fringe, as well as more challenging roads within it.

Born in the USA

The ‘X-Line Trail Attack Concept’ and ‘X-Line Urban Concept’ were both designed at Kia Design Centre America in Irvine, California, and built by Zero to 60 Designs, also located in California.

Describing the concepts as appealing to the sort of active lifestyles that Seltos owners embrace, Kia adds that the pair present “unique approaches to pump up capability while remaining firmly entrenched in reality”.

“The Seltos is an exciting addition to Kia’s tough and rugged lineup of Kia SUVs,” said Michael Cole, president, Kia Motors America. “But the Kia brand is always looking toward the future and we are eager to show what may wait just around the corner. These new concepts are meant to get the creative juices flowing and illustrate what the ultimate Seltos could be.”

Kia says there are no plans to bring either concept to production, but they said the same thing about the Telluride Concept from 2016, which became a reality last year in the form of a large, LandCruiser-sized SUV that’s currently limited to North America and other LHD markets only. 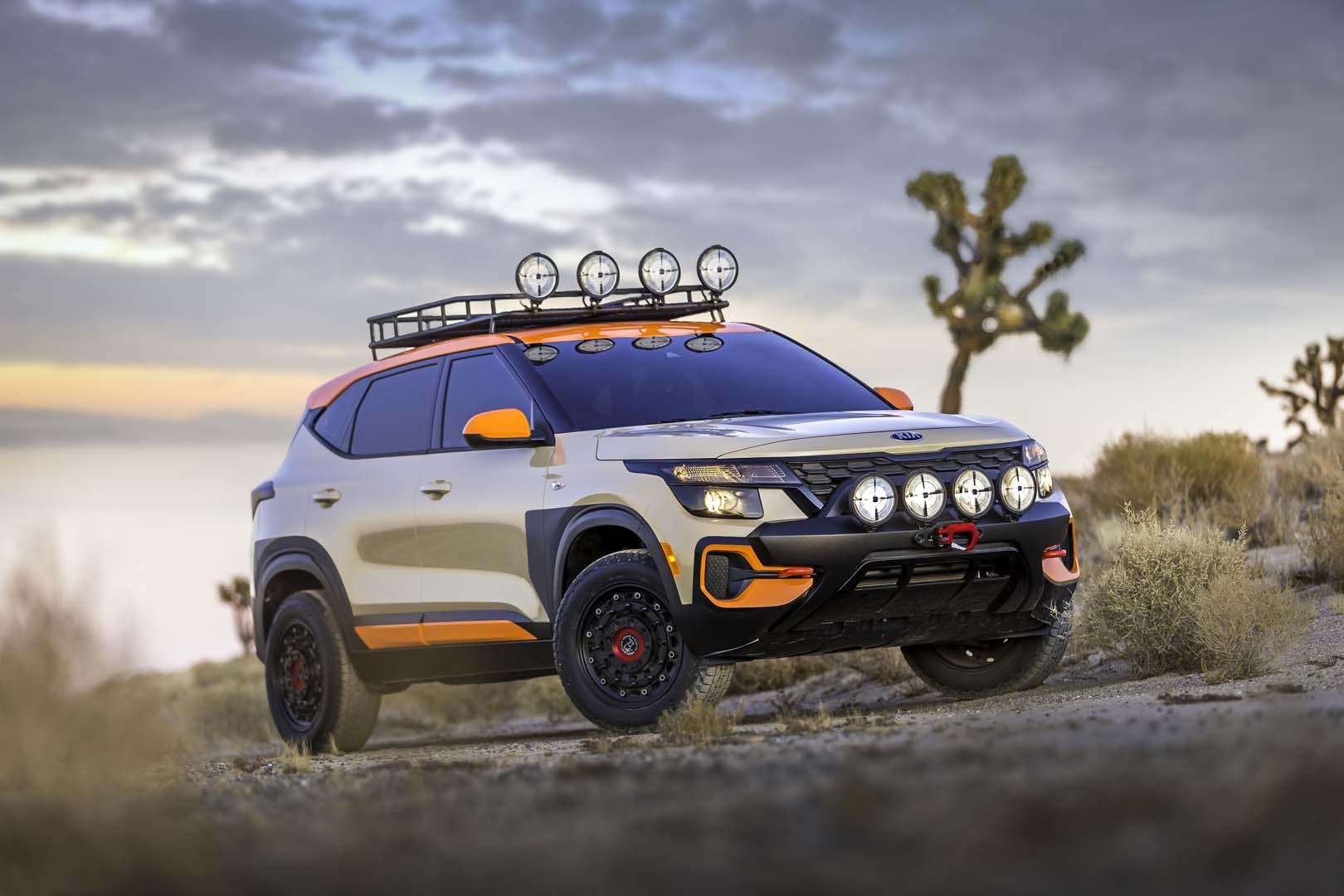 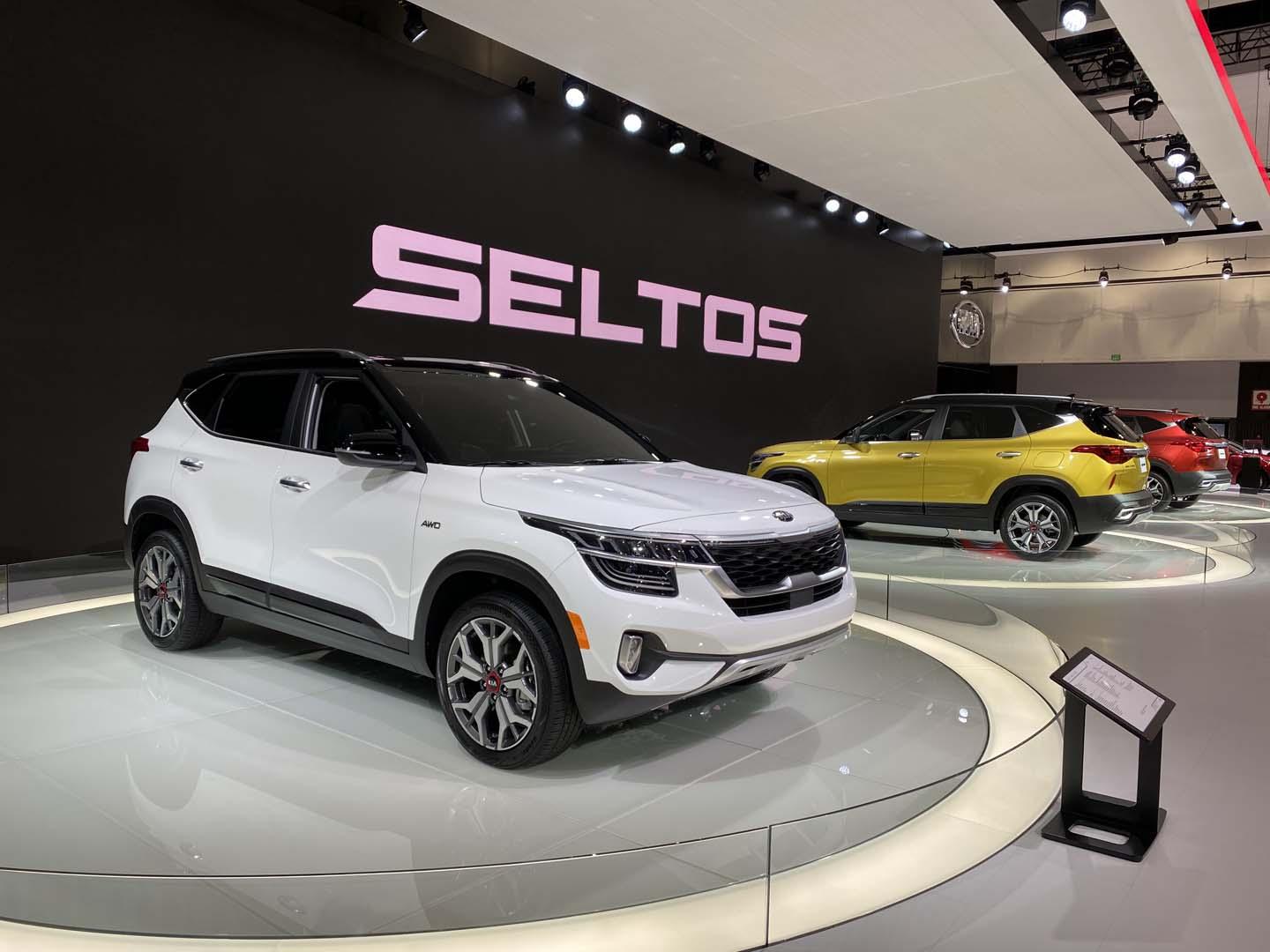 Finished in an orange and beige paint scheme designed to evoke a desert sunset, the X-Line Trail Attack Concept is designed for “the road less travelled”.

The Trail Attack Concept is more than just a paint job, though, with bona fide, off-road-capable additions including a 2-inch lift kit that raises the ride height to 9.2 inches (234mm), while 17x8-inch Black Rhino ‘Arsenal’ wheels with a beadlock look and custom finish are fitted with Falken Wildpeak A/T tyres. These have a more aggressive tread pattern than the normal road rubber fitted to the Seltos.

Kia’s electronic AWD system is fitted as standard and, in this application, distributes torque in an even 50:50 split between the front and rear axles.

Other off-road-focussed features include an additional front bumper that covers much of the signature Kia ‘tiger nose’ grille (that itself has been edged in a carbon fibre-look material) and houses both a winch and a quartet of Hella auxiliary lights. The headlights and DRLs appear to be of a different type to those used on the production Seltos, but retain the same housings, while the fog lights have been blanked off and a pair of tow hooks have been added.

A further four Hella lights have been added to a custom-made roof rack that also holds a hi-lift jack.

The back end is virtually unchanged from the production Seltos, with the chromed bar joining the rear lights blacked out and the lower bumper’s matte silver infill piece removed.

Powering the Trail Attack Concept is the same 1.6-litre turbocharged petrol four-cylinder engine available on the Seltos GT-Line variant, which produces 130kW and 264Nm. This is matched to the 7-speed DCT auto also found on the production Seltos GT-Line.

Inside, the concept is unchanged from the production model, but all the glass – even the windscreen – has been given a dark tint. 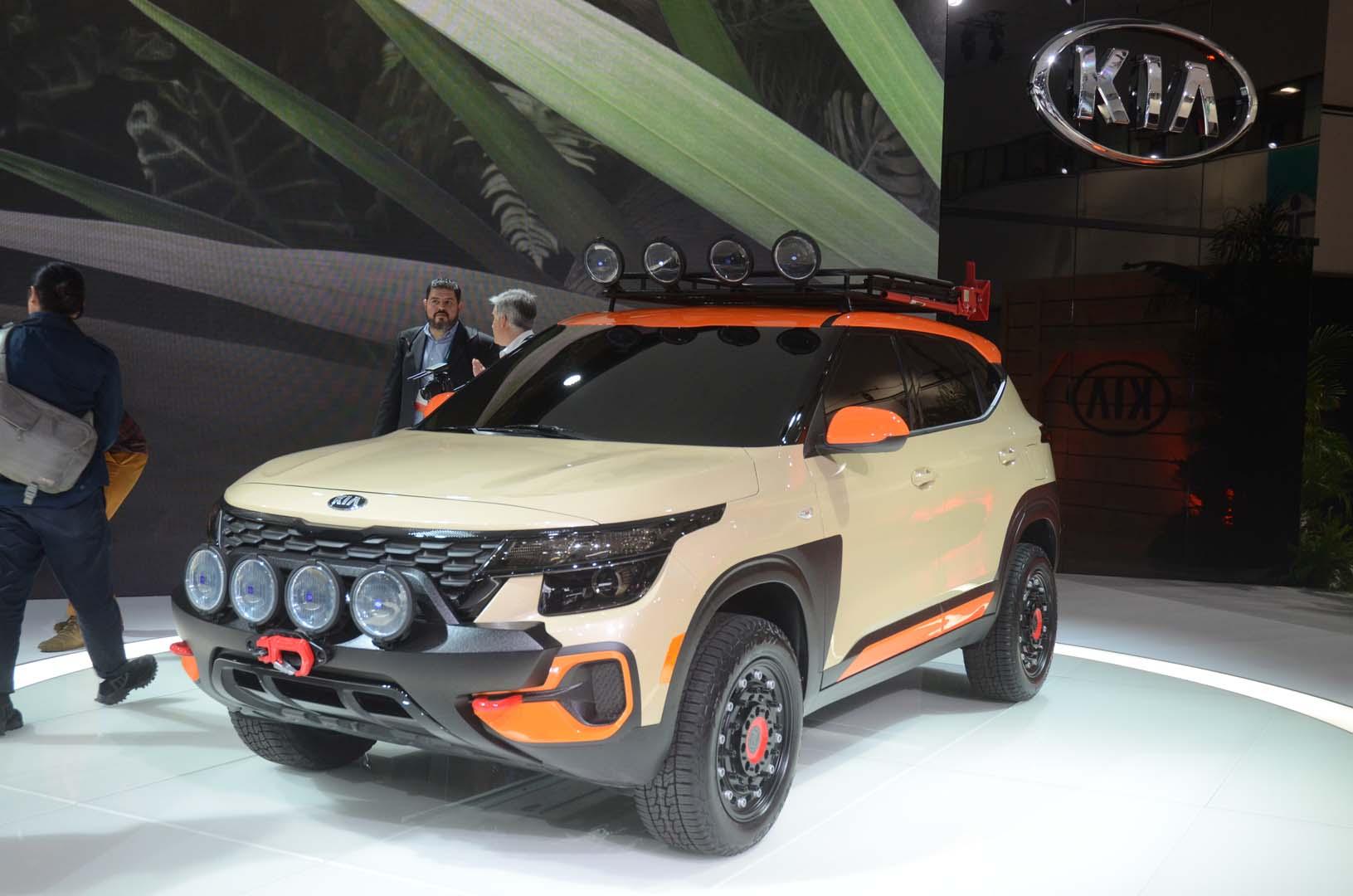 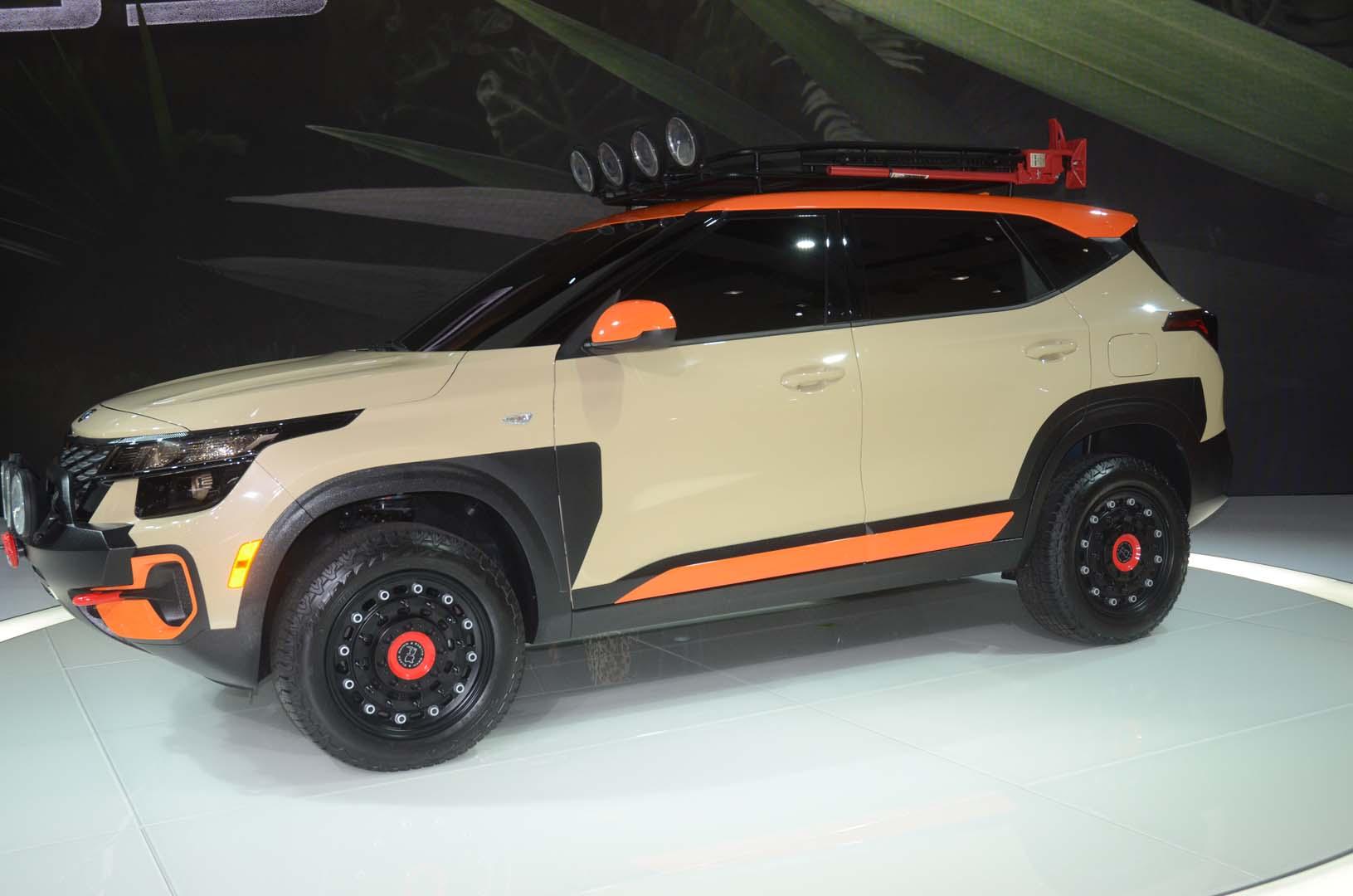 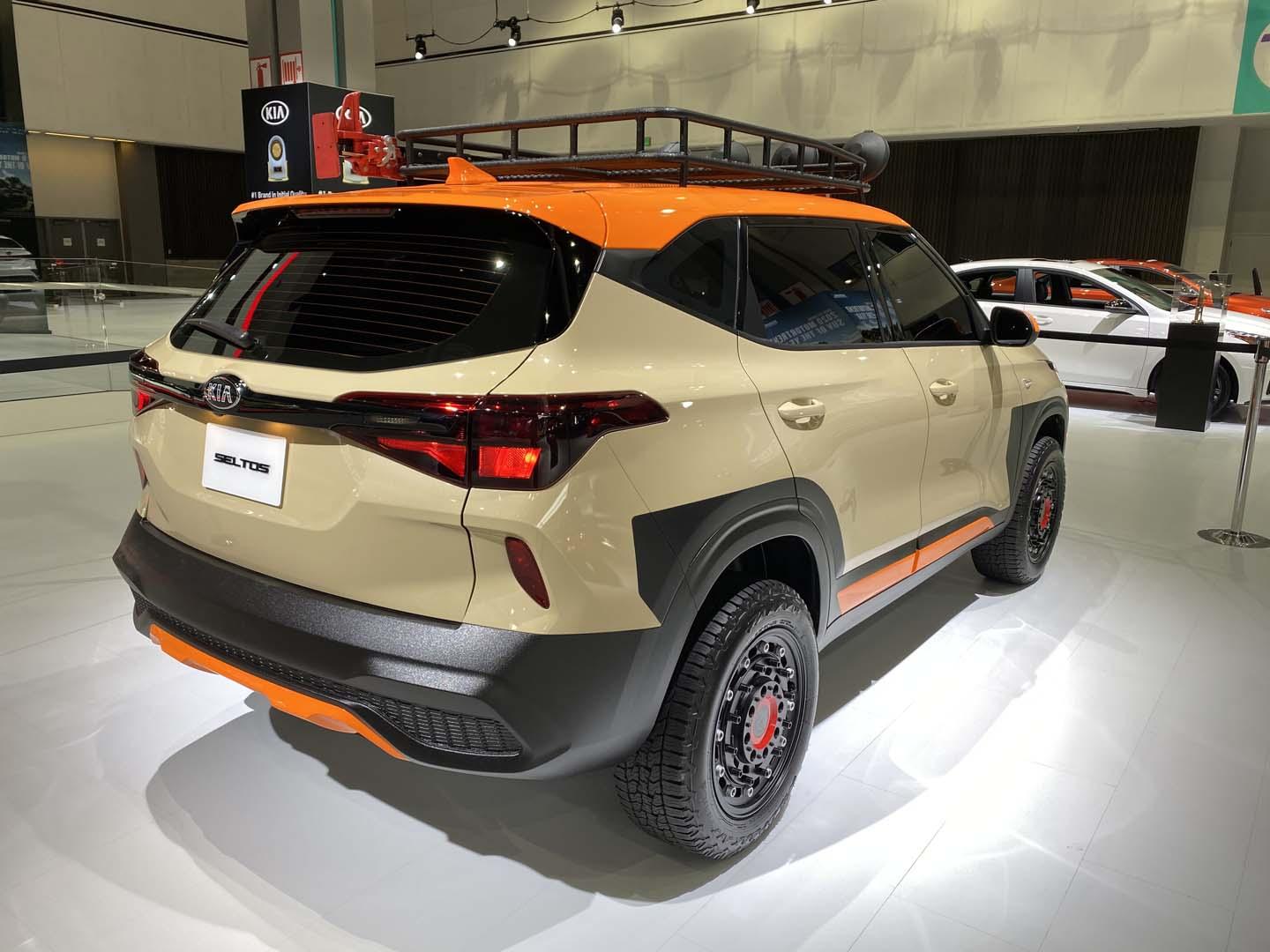 Described as the perfect companion for the “mean streets”, the X-Line Urban Concept carries fewer off-road modifications than the Trail Attack Concept, reflecting its inner-city focus.

Inspired by city skyscrapers, the Urban Concept is finished in a custom Slate Grey paint with a gloss black roof, contrasted by red mirror caps and a satin gold finish for the wheels, front and rear skid plates and lower sill trim. Further style changes include a black finish for the tiger nose grille surround that’s mirrored in the rear end trim.

A bespoke nudge-style bumper gives some impression of toughness, but sits almost flush with the body, so is largely decorative. There are tow hooks fitted, but presumably these are more decorative than functional, too.

Like the Trail Attack Concept, the Urban Concept has been given a 2-inch suspension lift for a new ride height of 9.2 inches (234mm). Wheels are 17x8 Black Rhinos again, but ‘Boxer’ models in this instance, with a satin gold finish and red centre section that’s a bespoke touch. Tyres are the same Falken Wildpeak A/Ts, which arguably stand out more on this concept.

The Urban Concept also runs the production Seltos 1.6-litre turbo petrol four-cylinder engine, but its forced induction properties are more apparent, thanks to the bespoke air scoop on the bonnet. Kia says this connects to a functional air intake for the 1.6 four, but makes no mention of any additional performance above this powerplant’s stock 130kW and 264Nm, other than to say it offers “authoritative acceleration away from stoplights”.

The factory lighting has been unaltered, with the fog lamps retained in this instance. Up top, four Hella spotlights fixed to a custom roof basket provide additional lighting power, while under the skin, the Kia factory electronic AWD system is in place.

Completing the Urban Concept’s specification is the same heavily tinted windows as the Trail Attack Concept. 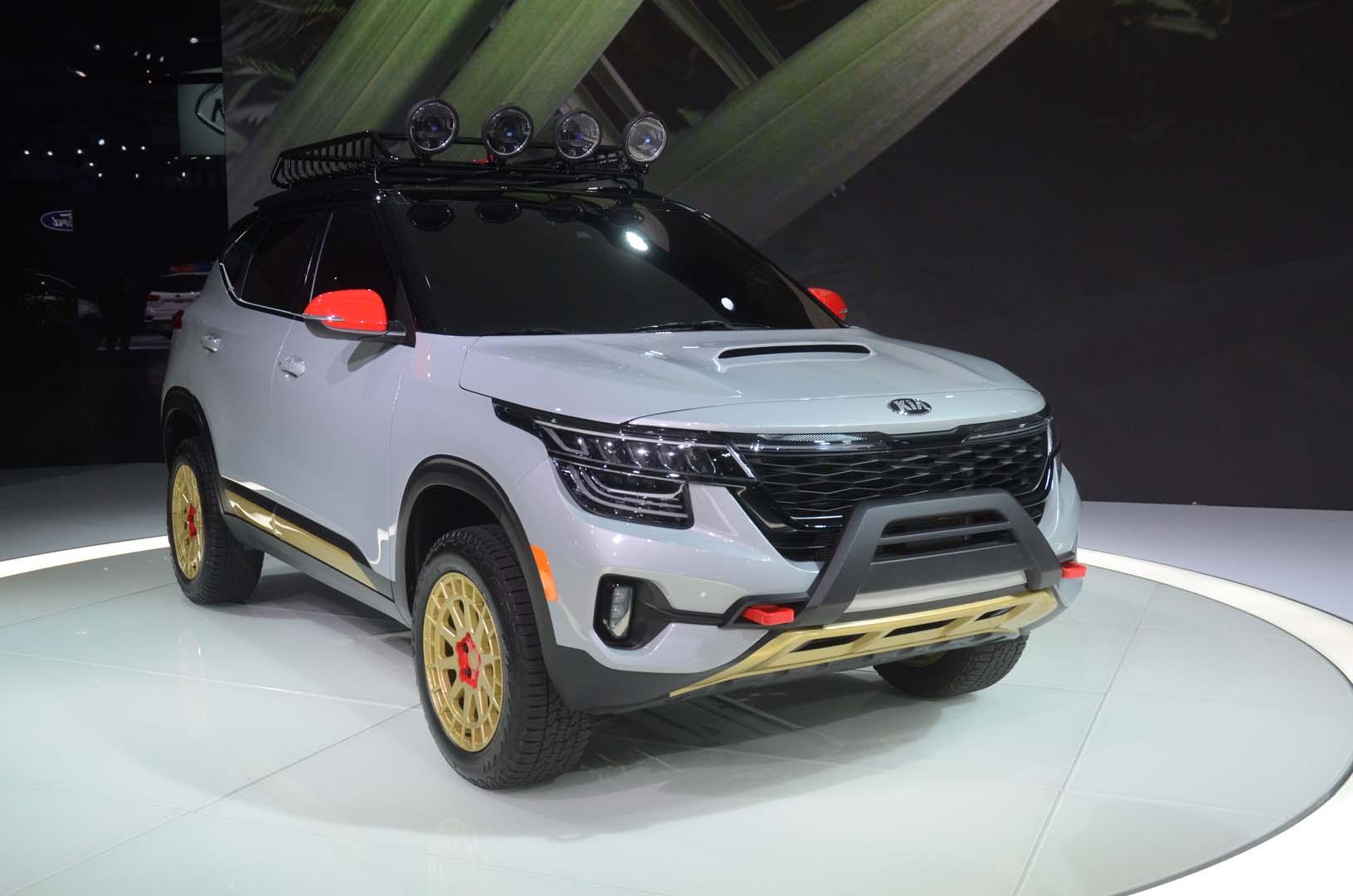 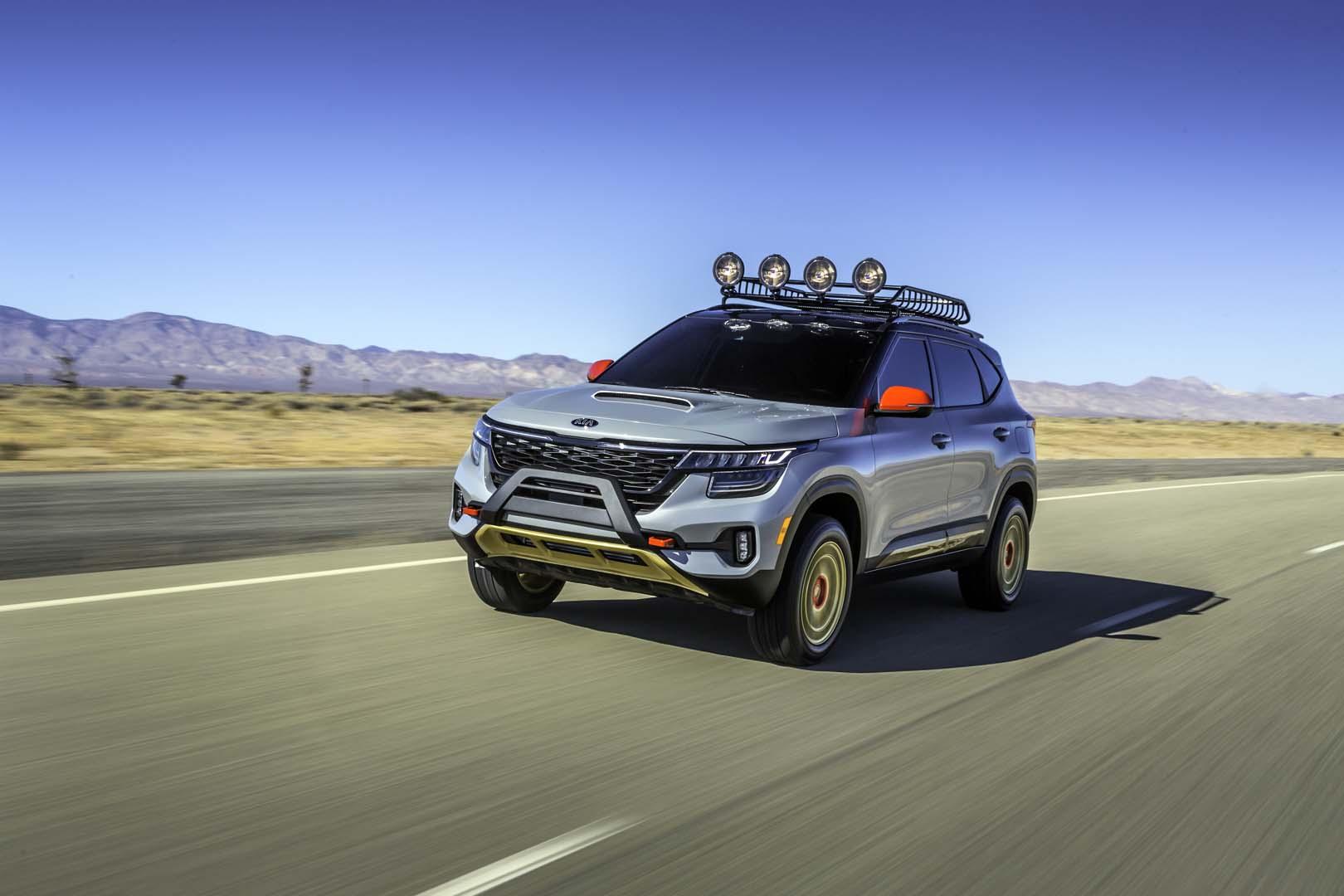 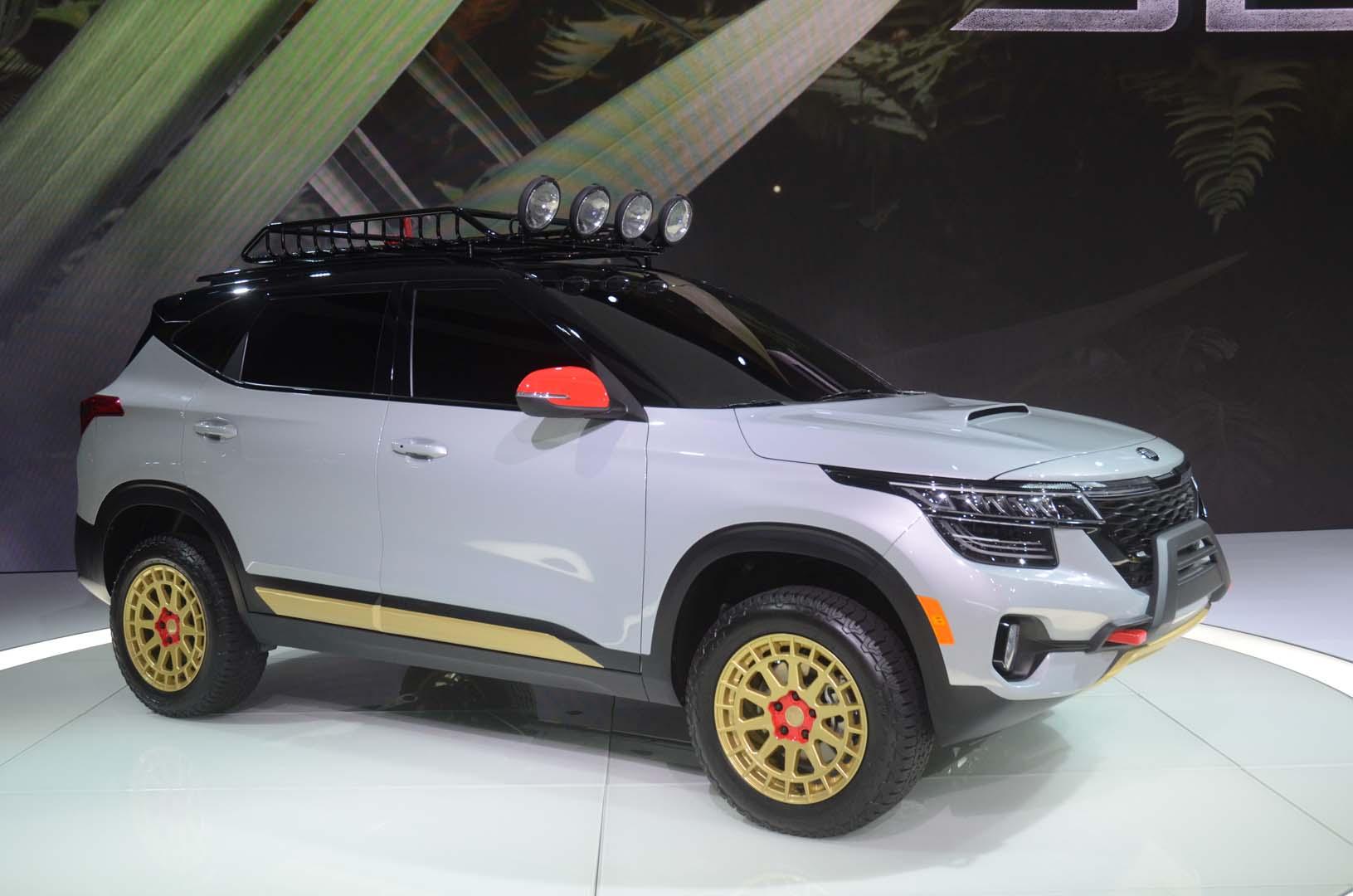