V8-powered Rubicon 392 loaded up with extra off-road gear and given a metallic grey wrap.

One of seven custom vehicles unveiled by Jeep at this year’s Easter Jeep Safari, the Wrangler ‘Rubicon 20th Anniversary’ may just be less of a concept vehicle and more of a preview for an upcoming production model. 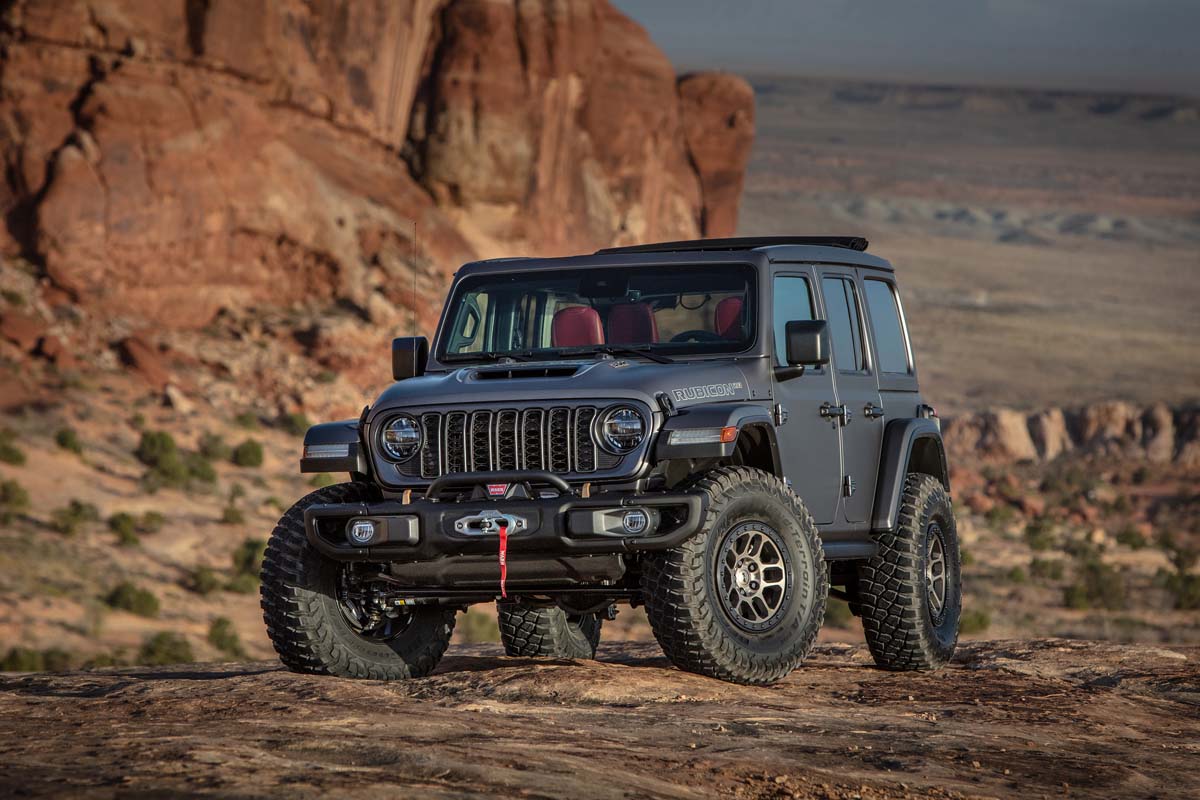 Released 20 years ago as a 2003 model, the first Jeep Wrangler Rubicon took the two-door Wrangler, loaded it with off-road ready features and named it after the famous Rubicon Trail in Northern California to reflect its enhanced capability.

Inspired by enthusiasts who dreamt about such an enhanced Wrangler and often made one themselves with aftermarket accessories, the original factory Wrangler Rubicon added all the gear that hard core off-roaders wanted – and backed it with a factory warranty. 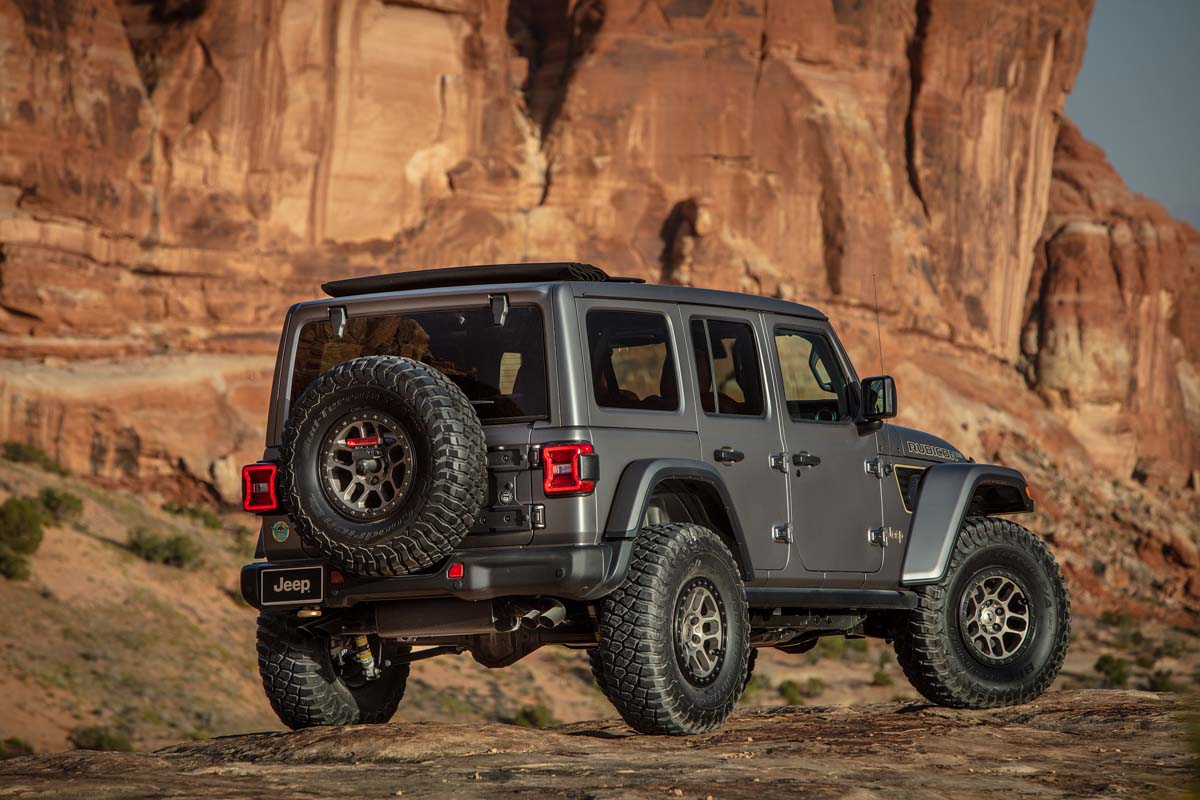 Equipped with options unheard of and not available on any other production Jeep at the time, the original Wrangler Rubicon came with Dana 44 axles, front and rear diff lockers, a disconnecting sway bar, rock rails, oversized 31-inch mud-terrain tyres and oversized wheelarch flares - all as standard.

With the Rubicon’s 20th Anniversary imminent, this concept pays tribute to the original with a creation based on the current Wrangler Rubicon 392. 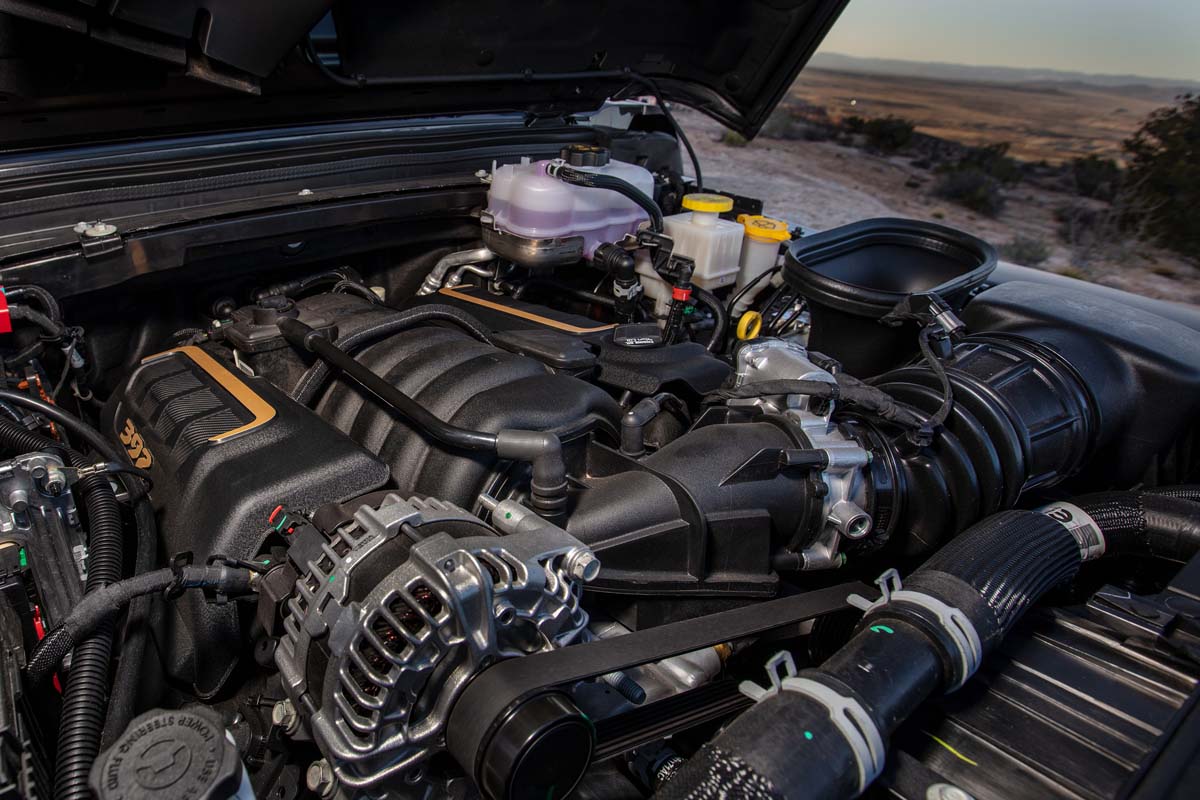 Thanks to its standard 6.4-litre petrol V8 engine (aka the 392ci HEMI V8), the Wrangler Rubicon 392 is the fastest and most powerful production Wrangler ever, producing 350kW and 637Nm, with a 0-100km/h time in the 4.5-second range. The hi-po V8 is matched to an eight-speed automatic with paddle shifters and a conventional console shifter. 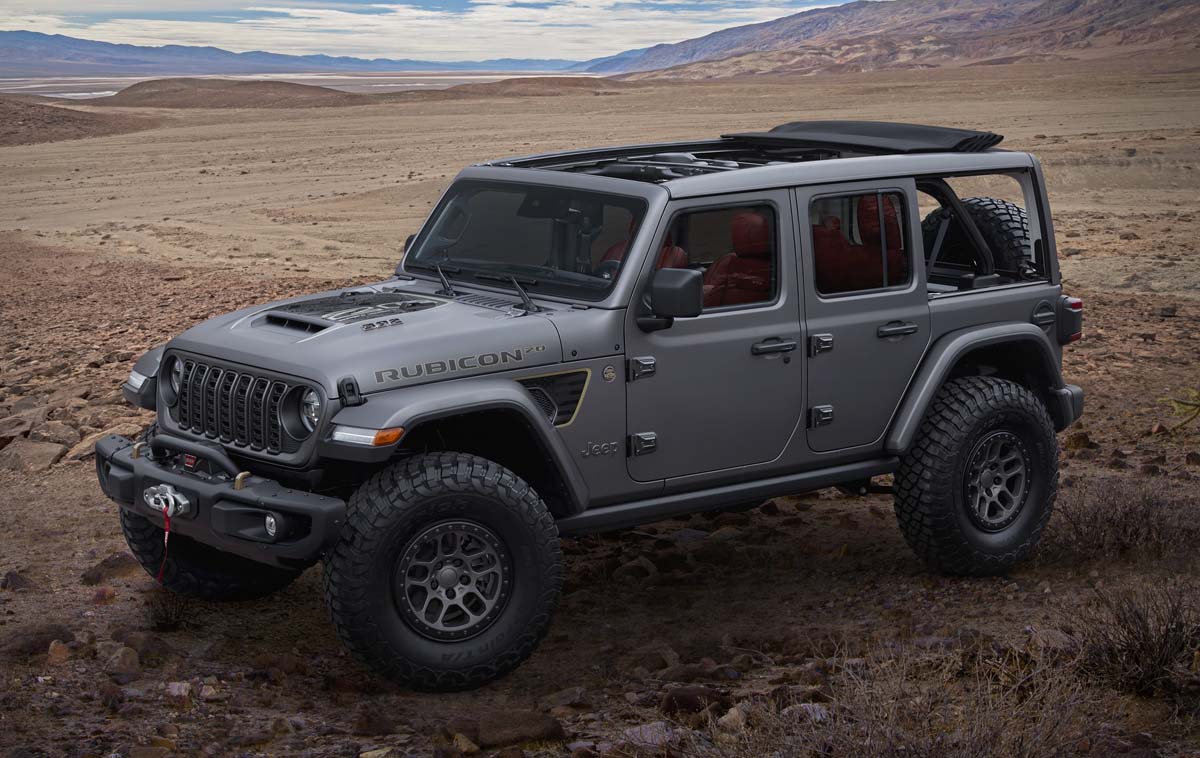 For the Rubicon 20th Anniversary concept, the Rubicon 392 drivetrain is unaltered, including the active dual-mode performance exhaust system.

The underpinnings have come in for some attention, though, with a Jeep Performance Parts (JPP) 2.0-inch lift kit fitted, along with JPP steel bumpers, a bolt-on front bumper loop, Warn winch and steel bellypan for extra underbody protection on tough trails. 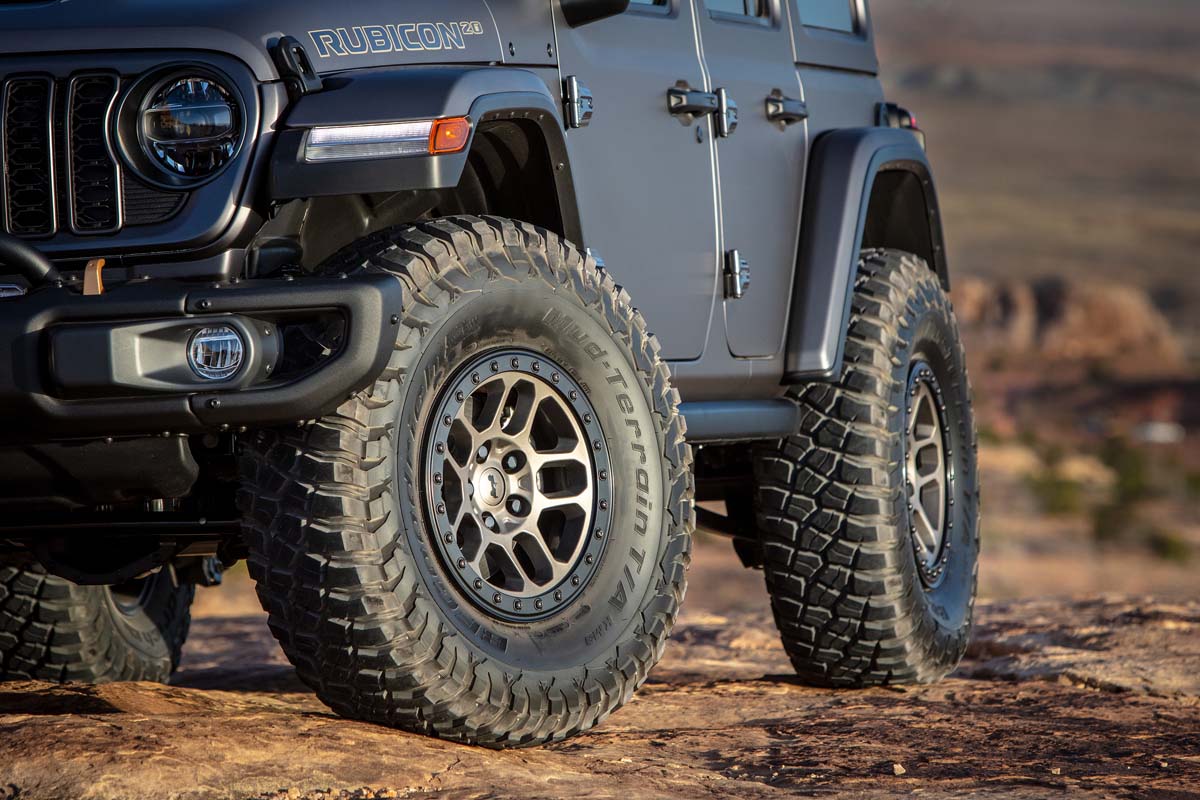 Jeep’s ‘Sky Touch’ power sliding sunroof is fitted and although Jeep describe this concept as having custom half doors, they appear to be the conventional full-frame type. 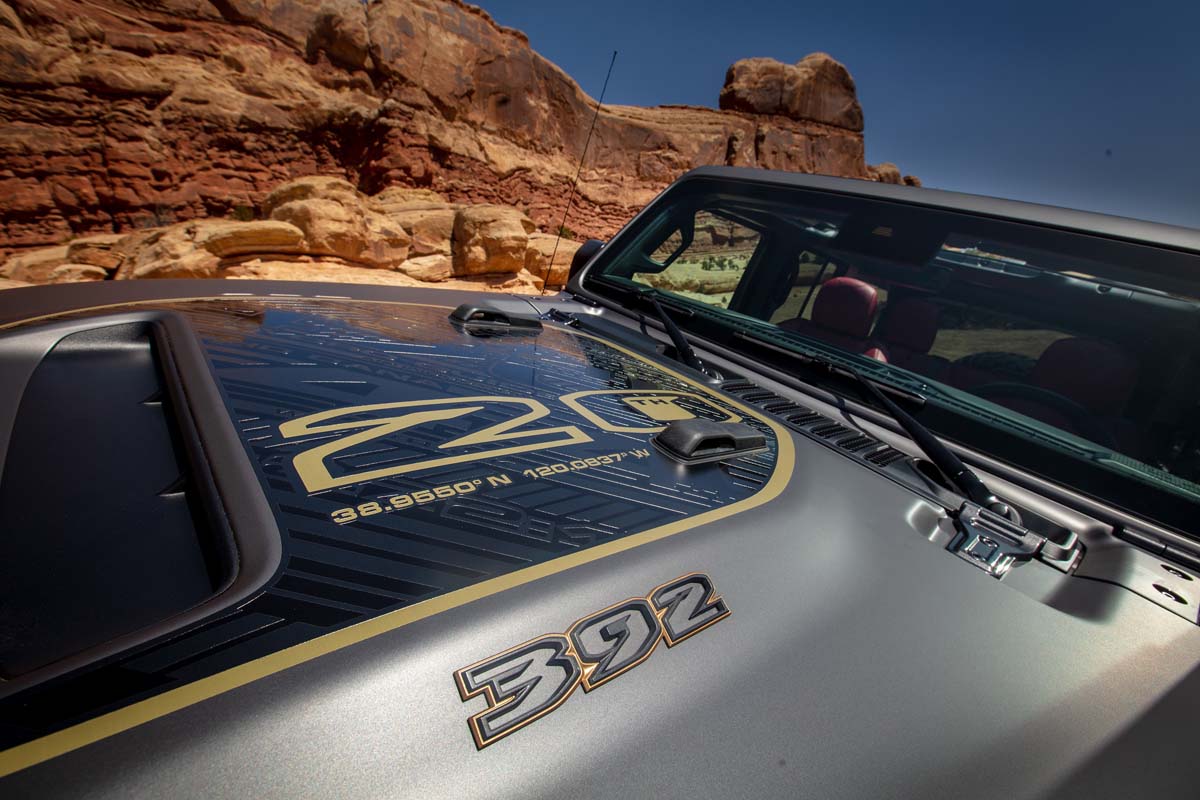 The Rubicon 20th Anniversary concept is finished in a dark grey with Granite Crystal metallic accenting, but instead of paint, a vinyl wrap has been used.

Contrasting this are gold tow hooks and gold badging, while on the performance bonnet, ‘Rubicon 20’ graphics feature on the flanks, with a large ‘20th’ on the functional air intake. Latitude and longitude co-ordinates on the bonnet denoting the position of the Rubicon Trail are a finishing touch. 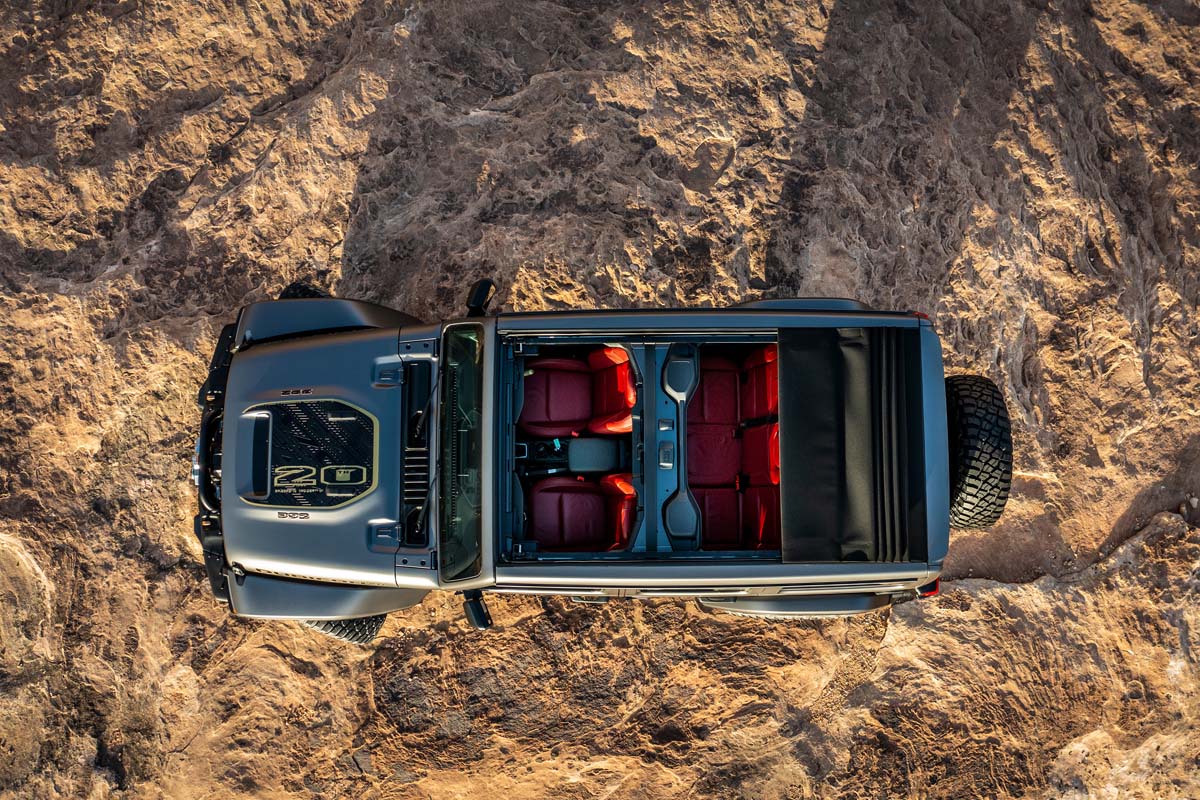 Inside, the Rubicon 20th Anniversary concept is unchanged from a stock Wrangler 392, including that model’s comprehensive instrument and infotainment displays, paddle shifters and available bright red leather seats. 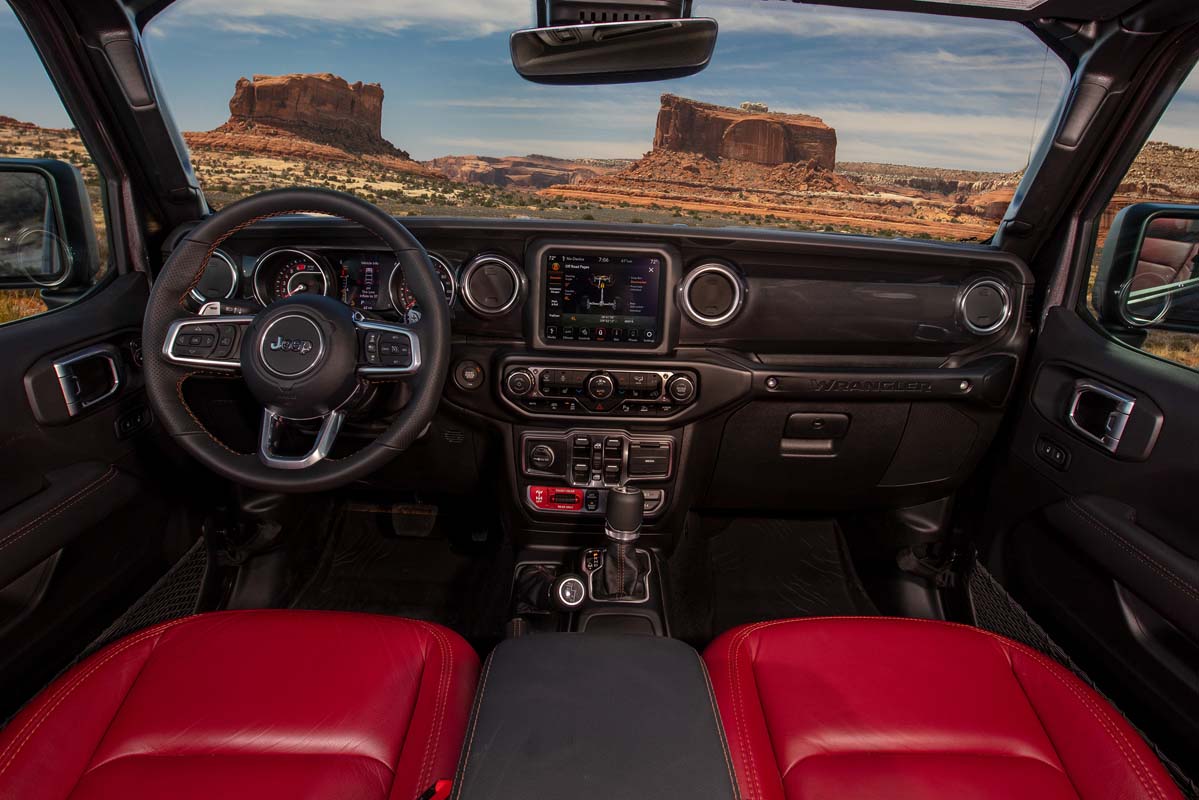 Of all the concepts presented at the 2022 Easter Jeep Safari, this one seems the most likely to reach

production, and with the Rubicon’s 20th Anniversary one that Jeep won’t overlook, don’t be surprised if a Wrangler Rubicon very similar to what you see here becomes a reality later this year or in 2023.

Unfortunately, with the current Wrangler 392 knocked back for an Australian release, any Rubicon 20th Anniversary Edition, if it comes to fruition, is also unlikely to come here.