Four-door Wrangler concept shows what can be achieved with factory-approved accessories from Jeep Performance Parts and Mopar.

Given the fact that Jeep owners love to modify and customise their vehicles, Jeep decided to show just how far Wrangler personalisation can be taken with the ‘Birdcage’ concept that debuted at this year’s Easter Jeep Safari in Moab, Utah. 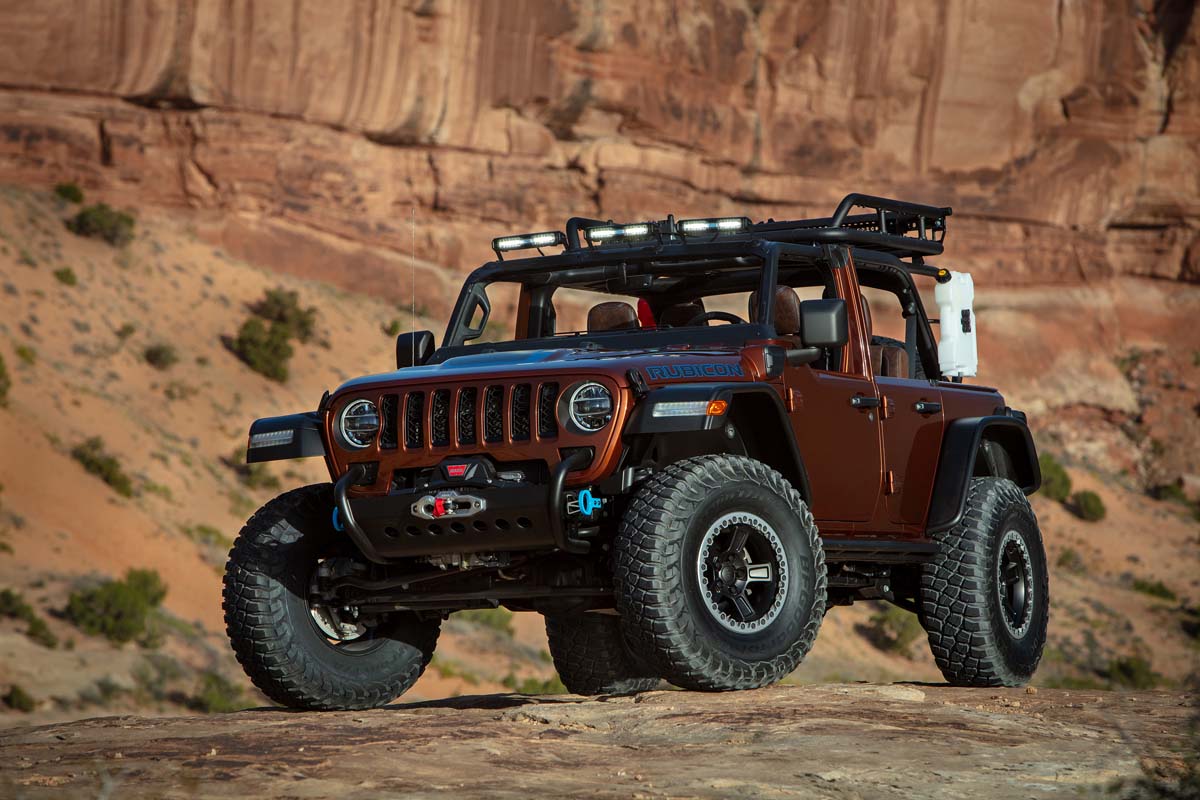 Loaded to the gunwales with products from the Jeep Performance Parts (JPP) and Mopar accessories range, the Birdcage was one of four Wrangler-based concepts that Jeep presented at the 2022 edition of the annual Easter Jeep Safari.

While the Magneto 2.0 explored the potential of electric power, the Wrangler ’41 was a nod to Jeep’s military past and the Rubicon 20th Anniversary hinted at a future production model, the ‘Birdcage’ concept was simply a showcase for factory-approved JPP and Mopar accessories. 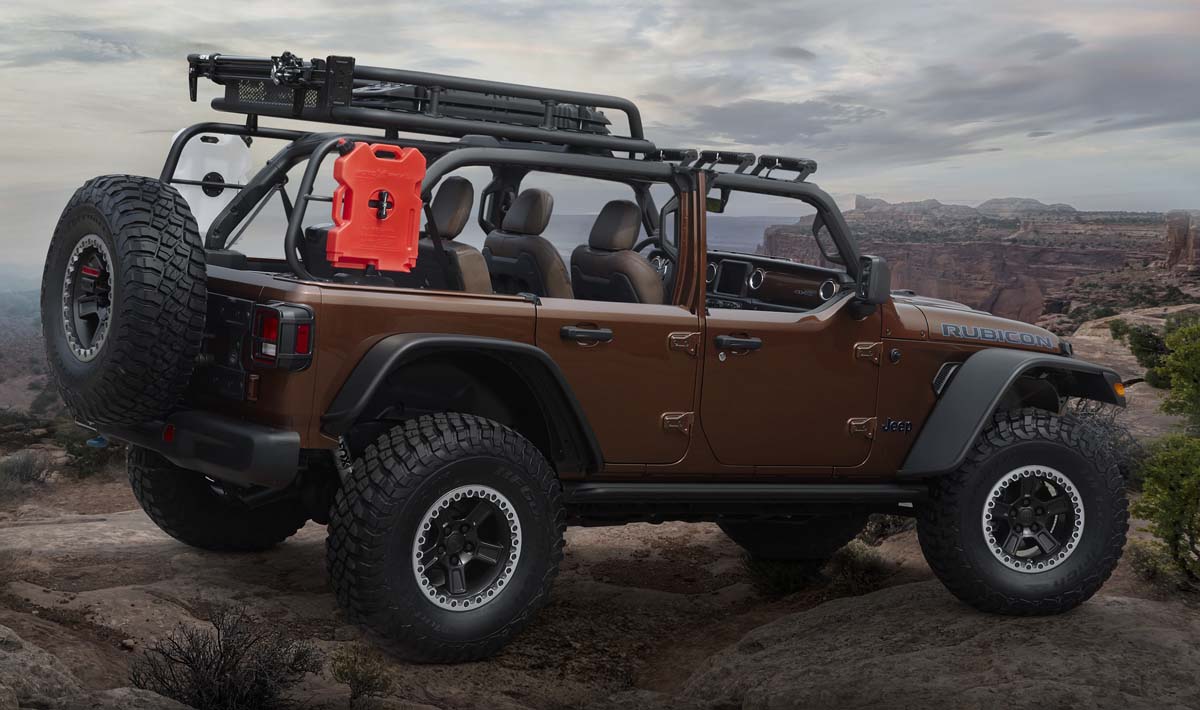 Based on a Wrangler Rubicon Unlimited 4xe, the Birdcage upped the ‘open air’ ante with half doors, no windscreen and no top. The result was what Jeep call a “wide open air extreme 4x4 machine”.

To this stripped-back Wrangler, Jeep crammed in as many JPP and Mopar parts as they could - inside, outside and underneath! Some of these were already available, some were on-test concept and prototype parts under development, while others were entirely new. 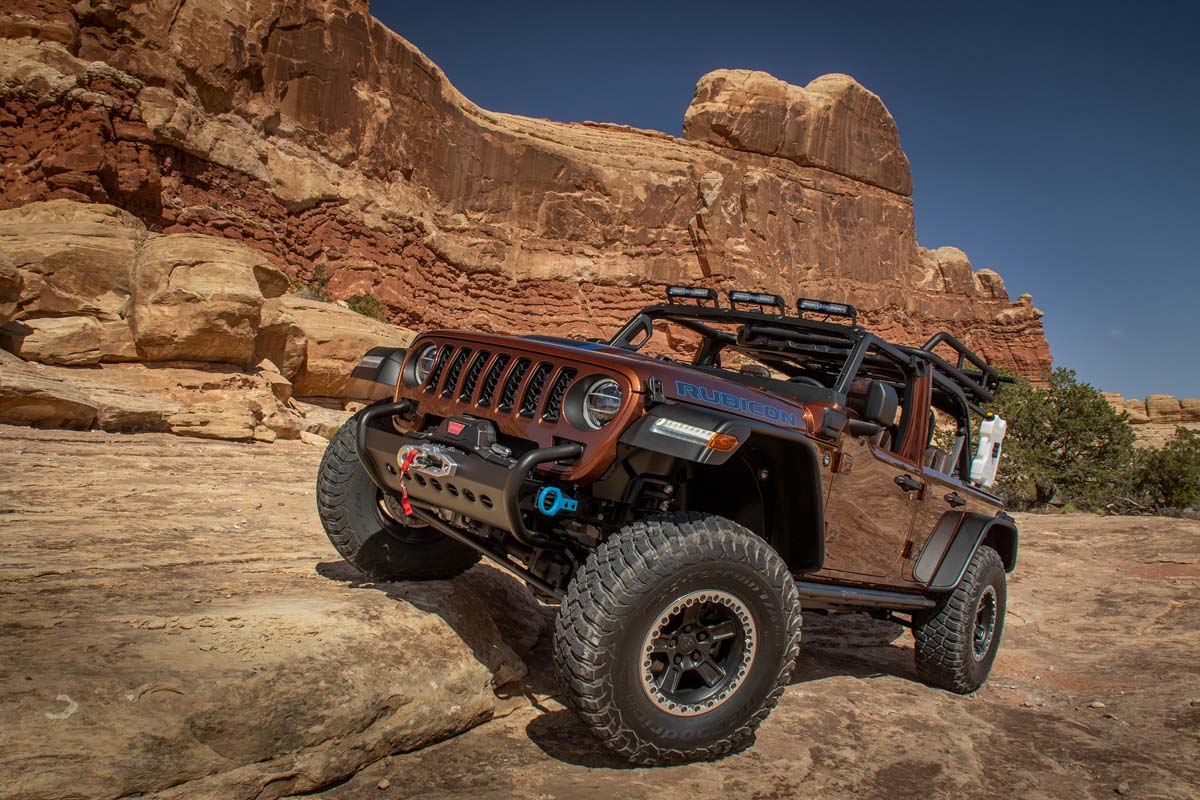 The key addition was the JPP 2-inch lift kit, which in this application incorporated FOX shock absorbers all round in what Jeep are calling an industry first. These shocks had also been specially tuned to suit the 4xe plug-in hybrid drivetrain without compromising off-road capability. 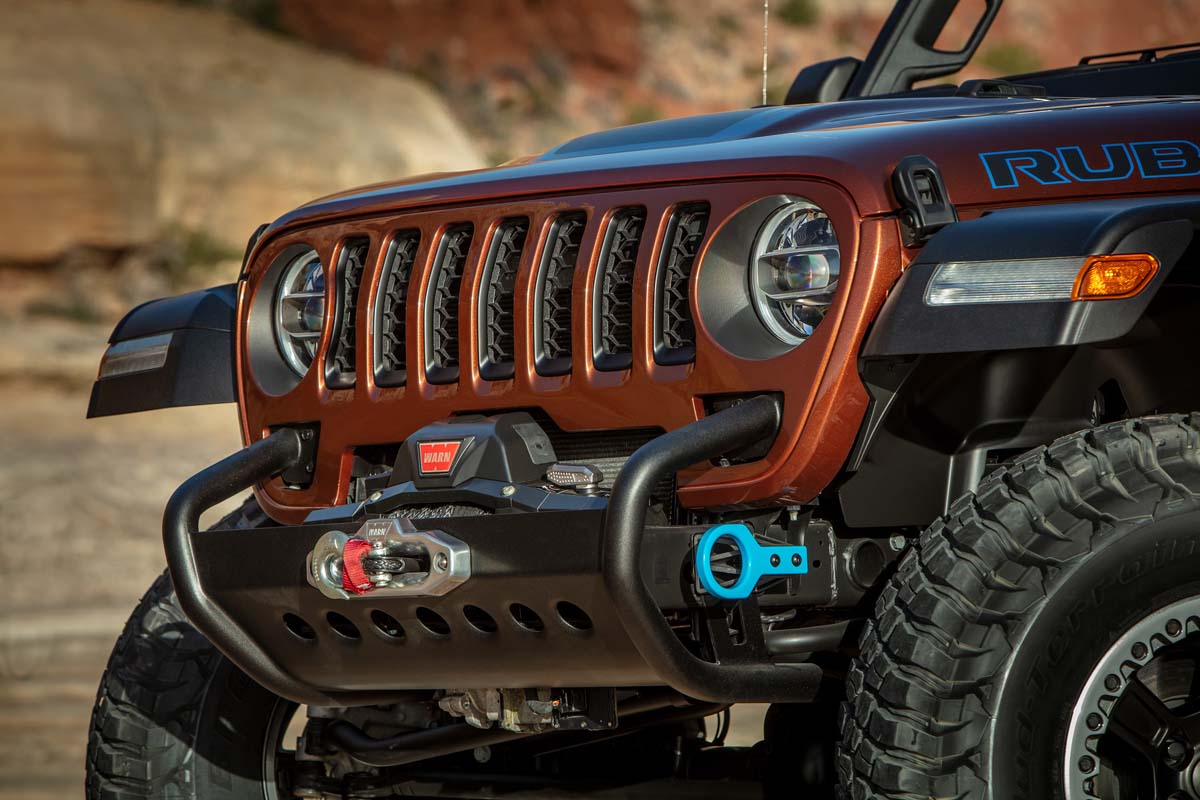 Also new was a custom front skid plate, connected to the grille via a pair of curved 2-inch steel tubes and incorporating tow loops. Jeep claimed this skid plate not only protects the Warn winch up front but also improves the Wrangler’s approach angle.

Further protection for tough conditions was offered in the form of custom rock rails, while underbody lights at each corner were added to illuminate the trail immediately around the vehicle. 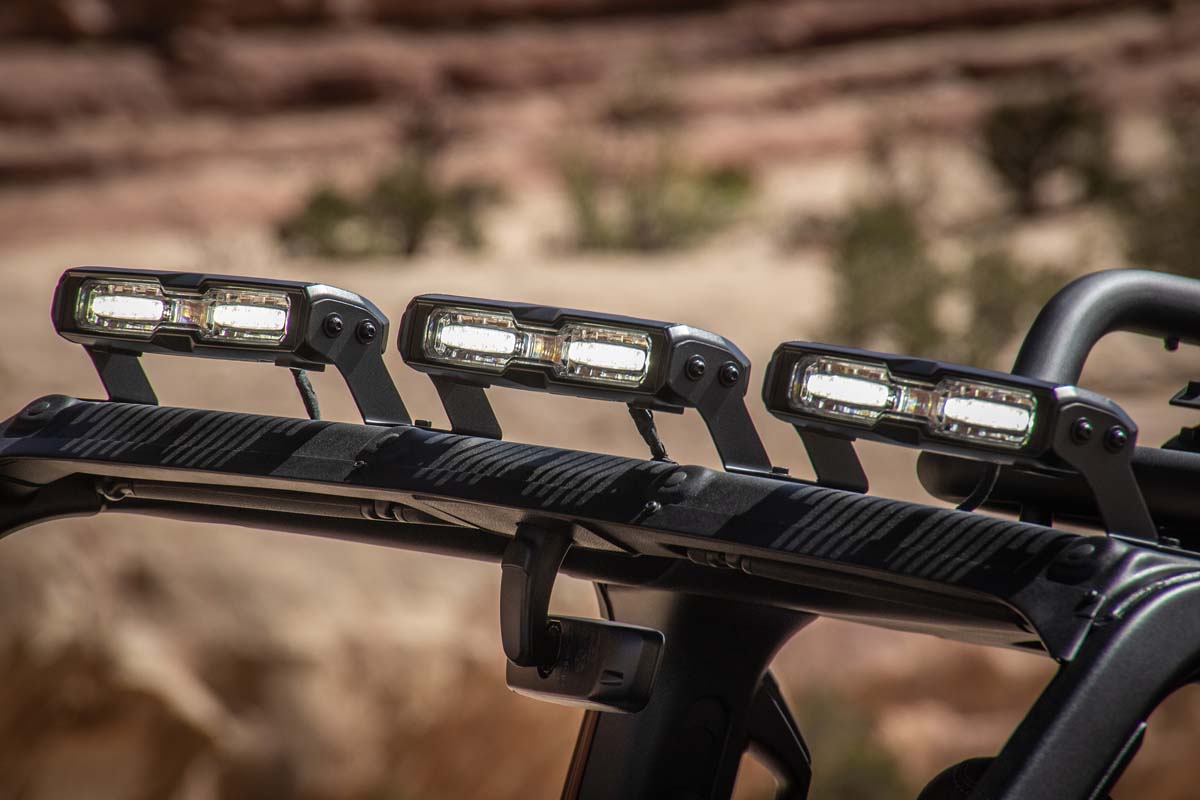 To light the trail ahead, the Birdcage wore a trio of concept JPP ‘TYRI’ 14-inch LEDs, mounted to the windscreen frame. Behind these, a Rhino Rack cargo basket on the roll cage holds up to 272kg of recovery equipment or camping gear. 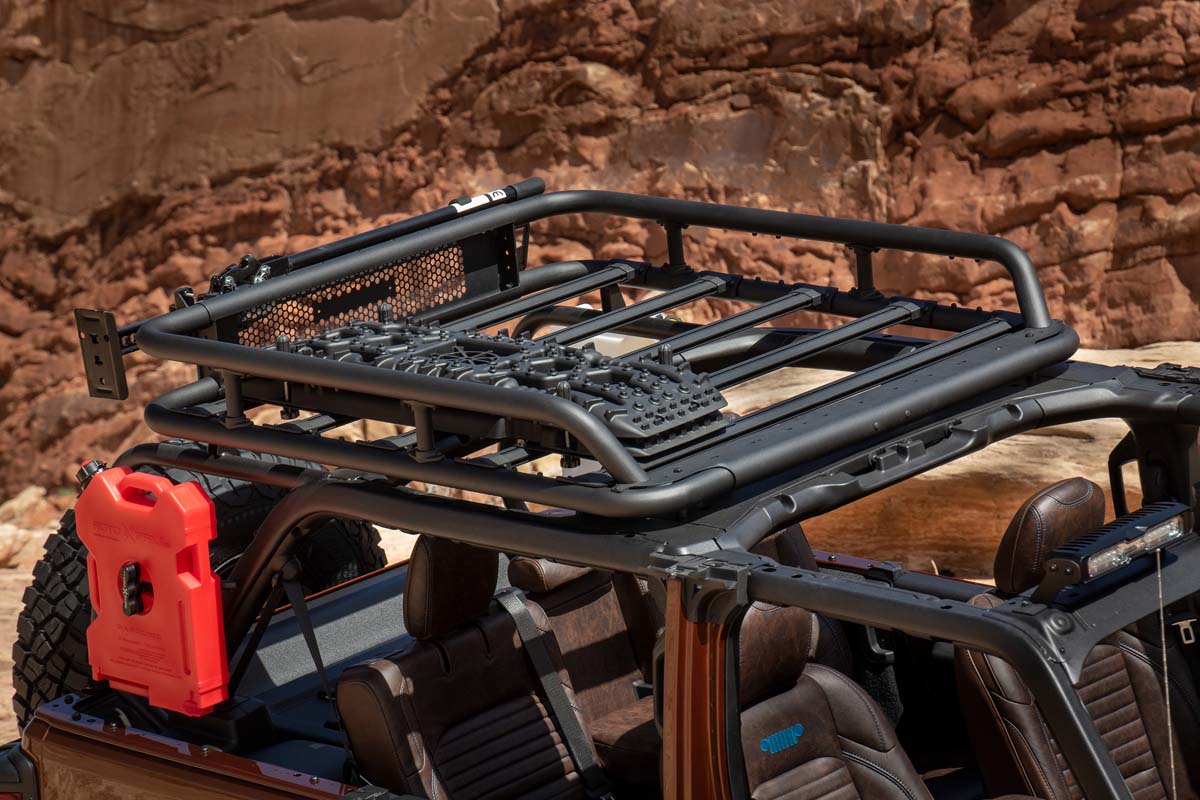 The wheels on the concept were JPP beadlock five-spoke items, measuring 17 x 8.5 inches and fitted with 37-inch BF Goodrich KM3 tyres. Crowning these were custom flat wheelarch flares specially designed to handle oversize wheel and tyre combos like this. Incorporating indicators and DRLs that can be removed for rugged off-road work, these flares were said to be legal in all US states. While still concepts for now, Jeep said they could become a production item if the customer demand is there. 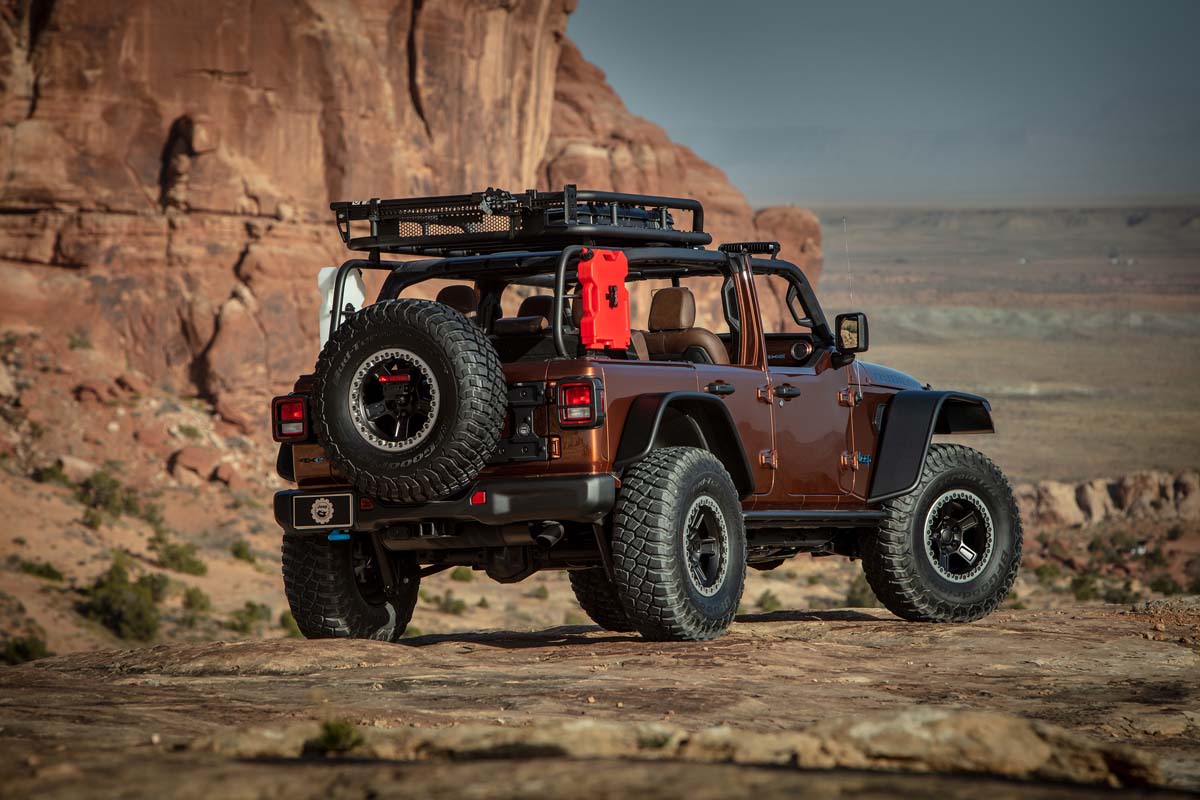 Finished in Eagle Brown (with the Granite Crystal metallic effect applied to other Easter Jeep Safari concepts), the Birdcage followed the trend of this year’s other hybrid concepts in picking out selected exterior details in Surf Blue, like the tow hooks, decals and badging.

That rich metallic brown paint was continued inside, accented with Tobacco Leaf and Cocoa Brown leather trim for the seats. The Surf Blue stitching on these weathered-look seats was also applied to the boots for the hi-lo and gear selectors, hand brake and steering wheel. 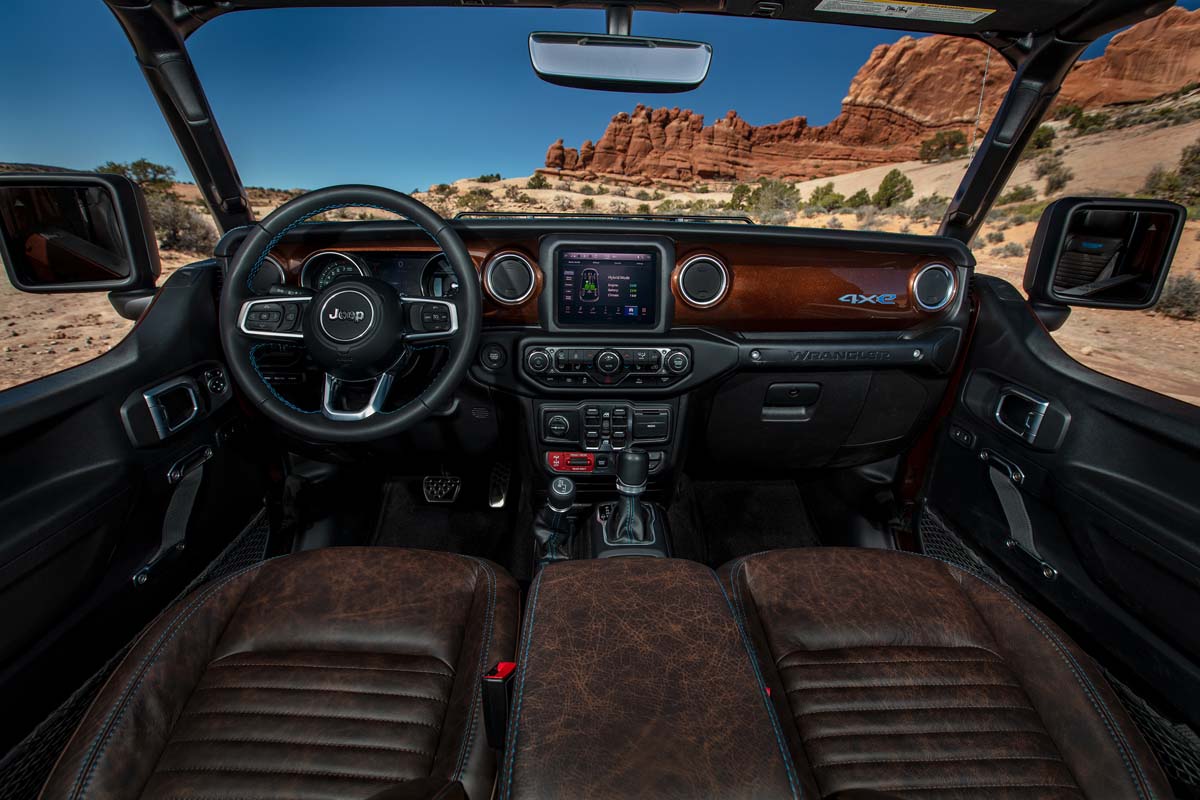 The Birdcage concept also featured Armorlite vinyl flooring with drain plugs to help rinse out the interior, while atop the dash, filler panels were fabricated to cover the vents and windscreen wipers that had been removed. In their place, a JPP accessory rail was added to mount a GPS or smartphone.

At the rear, Rotopax containers were mounted to the rollcage and a JPP fold-down table and integral air compressor was added to the tailgate panel. 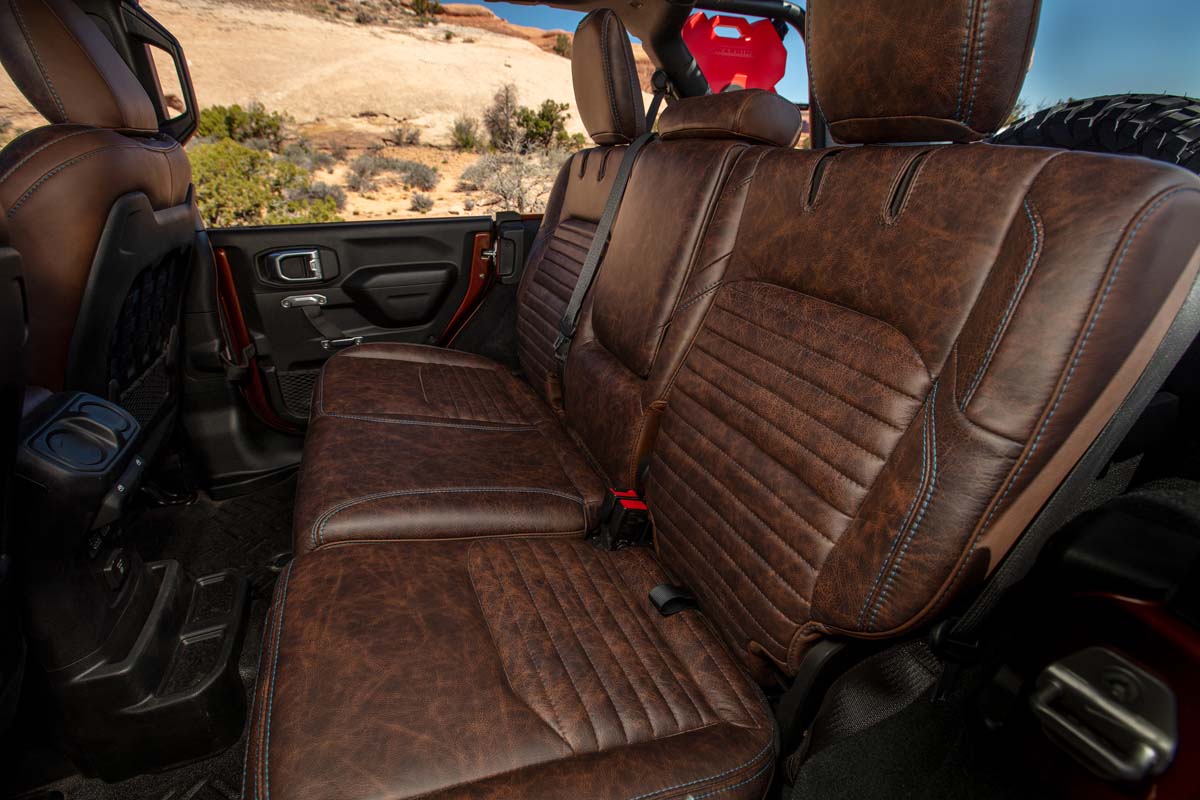 Additions from the Mopar range inside this concept included stainless steel pedal covers and the ‘Add-A-Trunk’ concept panel which allows for secure storage of valuables in an open-air vehicle such as this.

Designed to fit behind the rear seats of any Wrangler, the Add-A-Trunk can apparently allow a standard-size Esky to be stored and features gas-assisted struts to hold the lid open. The addition of eight tie-down loops and five bag hooks provided additional storage functionality.