While some of the concepts that Mopar, the parts division for Stellantis North America (née FCA/Chrysler), create for the annual SEMA auto aftermarket trade show are pure flights of fancy, others are more down to earth, designed to showcase the customisation possibilities using factory-approved cosmetic, mechanical and protective parts. The latter was the case with the ‘Wrangler 4xe concept’ that Mopar unveiled at the 2021 SEMA Show. 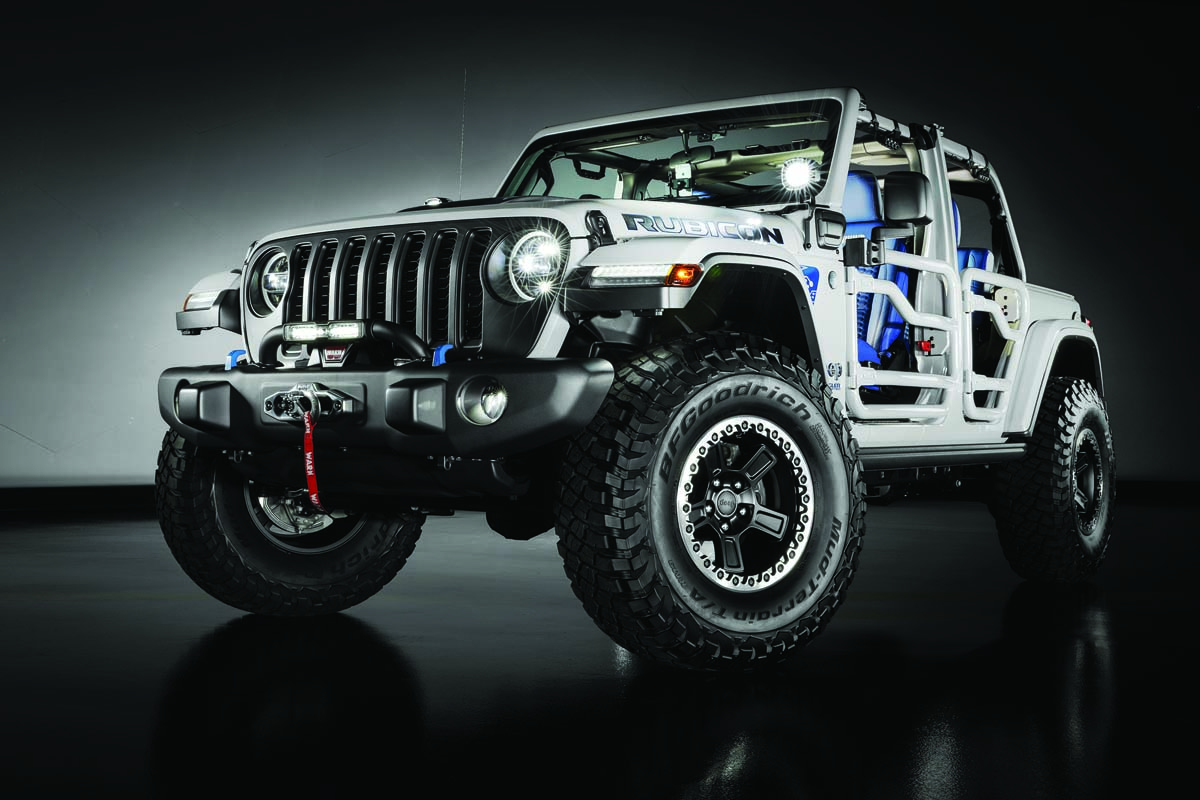 Based on a new Wrangler Unlimited 4xe plug-in hybrid, this concept was a showcase of Jeep Performance Parts (JPP) and Mopar accessories, starting with standard fare, like a lift kit and suspension upgrade, but adding some intriguing custom and concept extras, too.

It’s worth noting that, in this application, the JPP 2-inch lift kit and FOX shocks were specifically tuned to the 4xe’s different front-rear weight bias compared to a conventional Wrangler Unlimited. 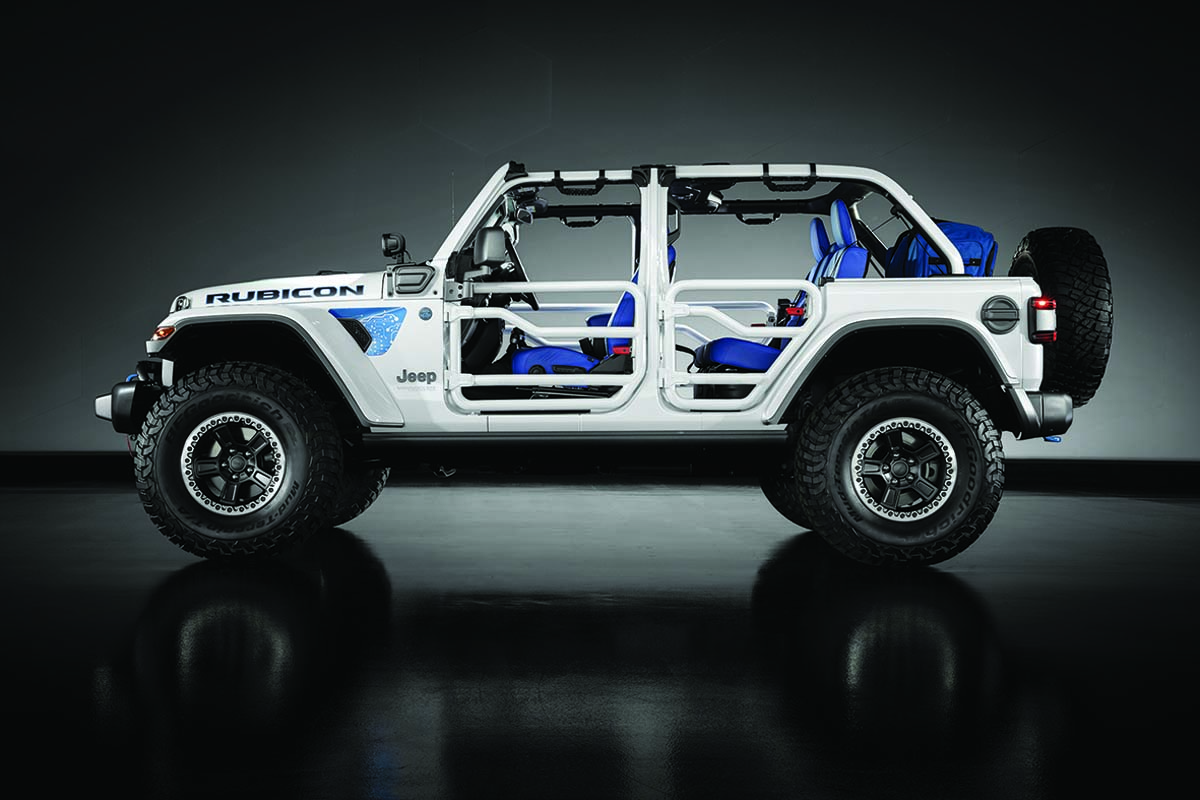 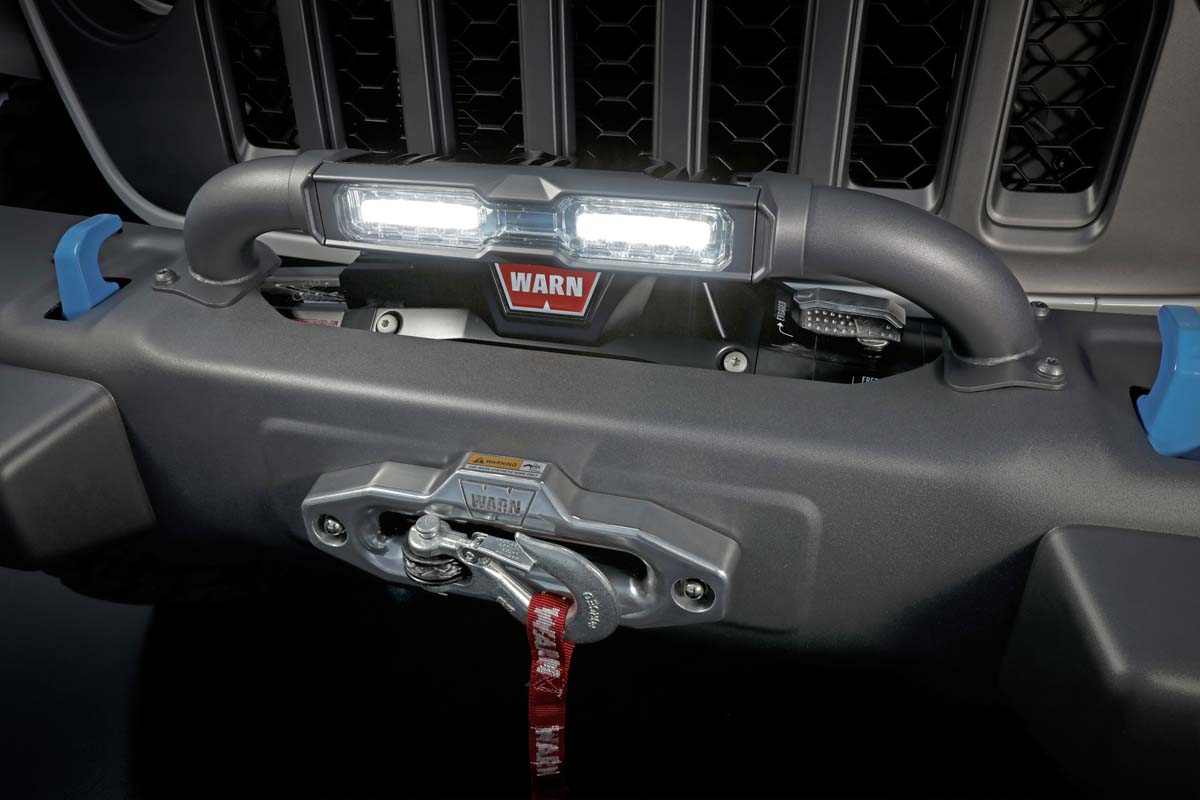 The swing-gate hinge reinforcement and high-mount stop light at the rear, along with the tube doors and rock sliders, were all stock JPP items, but the JPP stamped steel bumper on the Wrangler 4xe concept added a custom steel hoop for an LED lighting attachment. 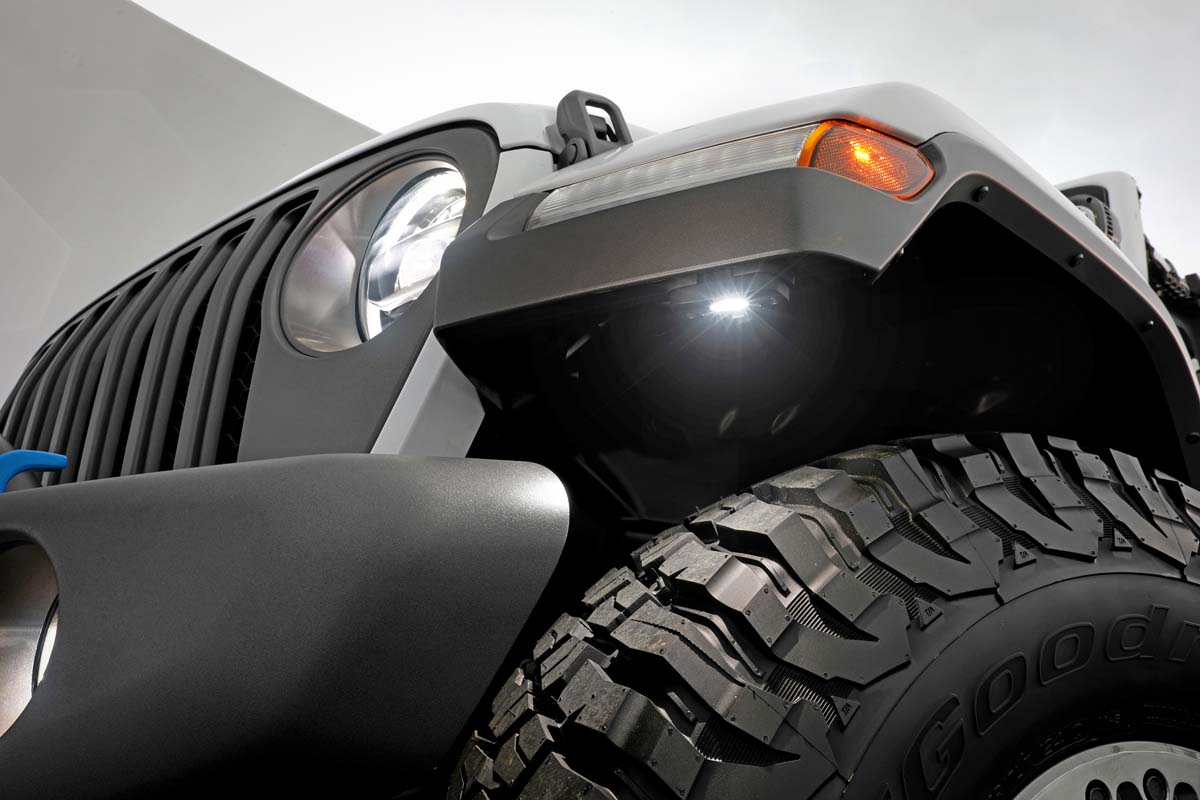 Speaking of lighting, custom LEDs were added underneath this concept, too. Positioned near each wheel, Mopar said this lighting is designed to illuminate rocky paths and trails so the driver can see and avoid obstacles. 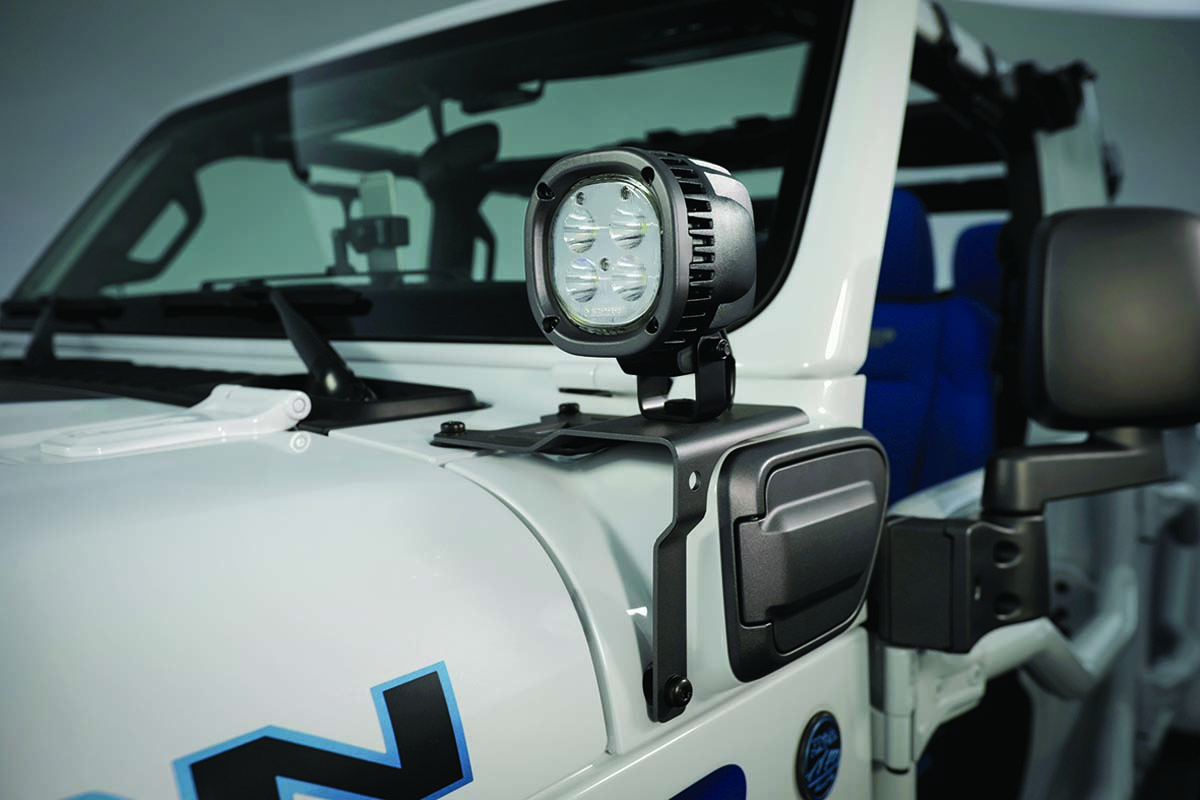 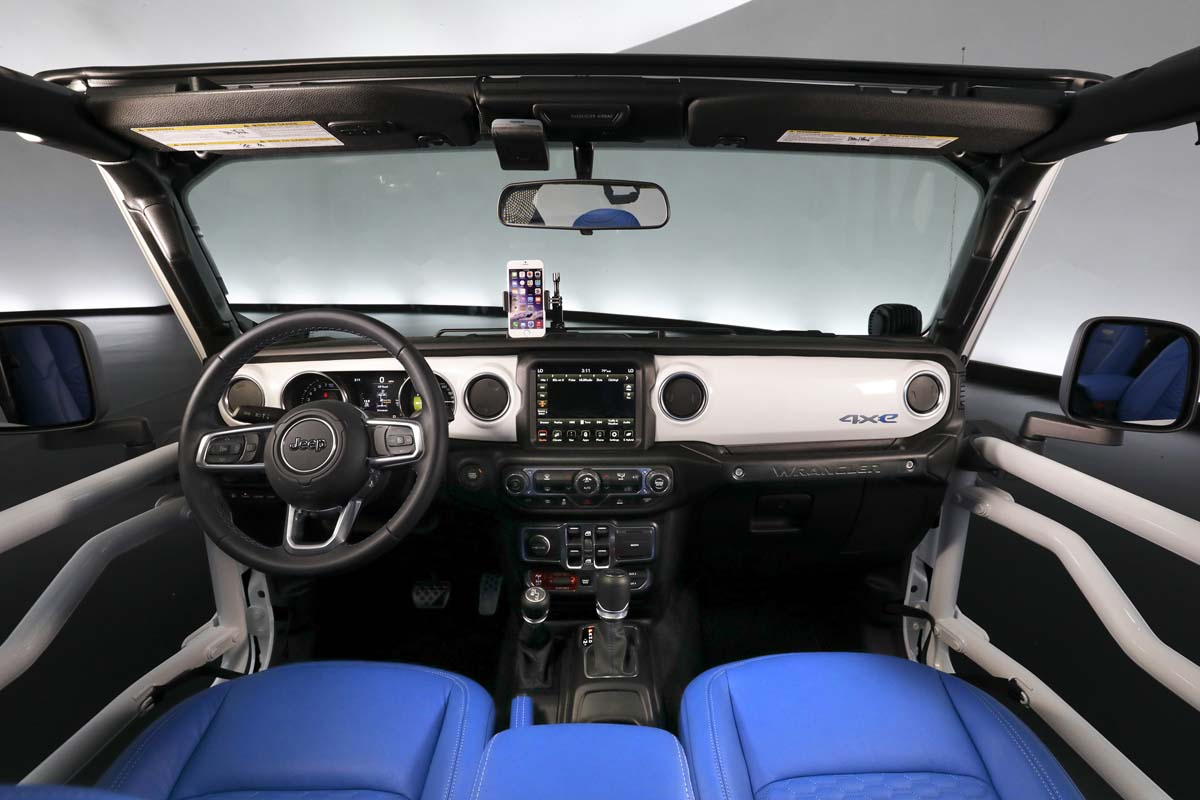 Along with those bright blue seats, the 4xe concept’s interior also featured the JPP accessory rail system on top of the dash for mounting mobile devices, with JPP rubber pedal covers and JPP grab handles added, too. 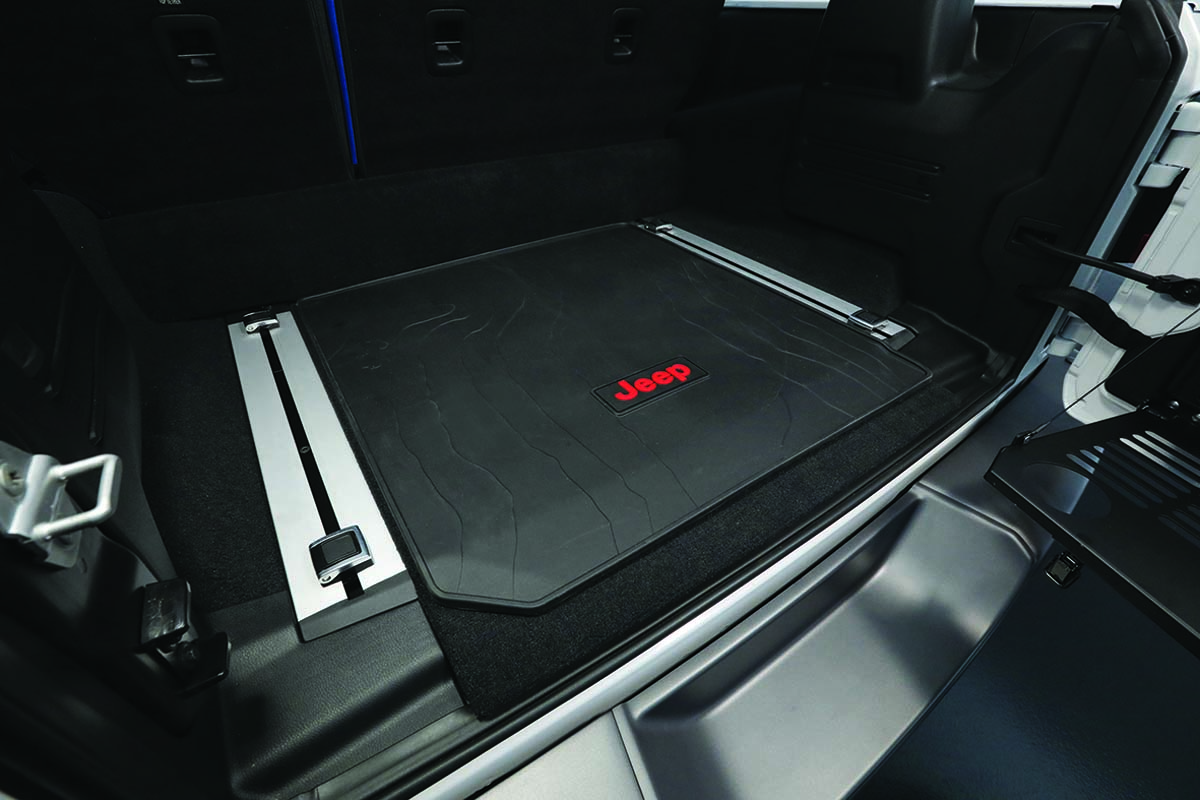 Concept JPP vinyl flooring incorporating drain plugs was fitted, while behind the seats, a custom Trail-Rail cargo management system incorporated multi-position adjustable tie-down loops for securing items like a fridge, camping equipment or recovery gear. A JPP flip-down table for the tailgate was also fitted at the back. 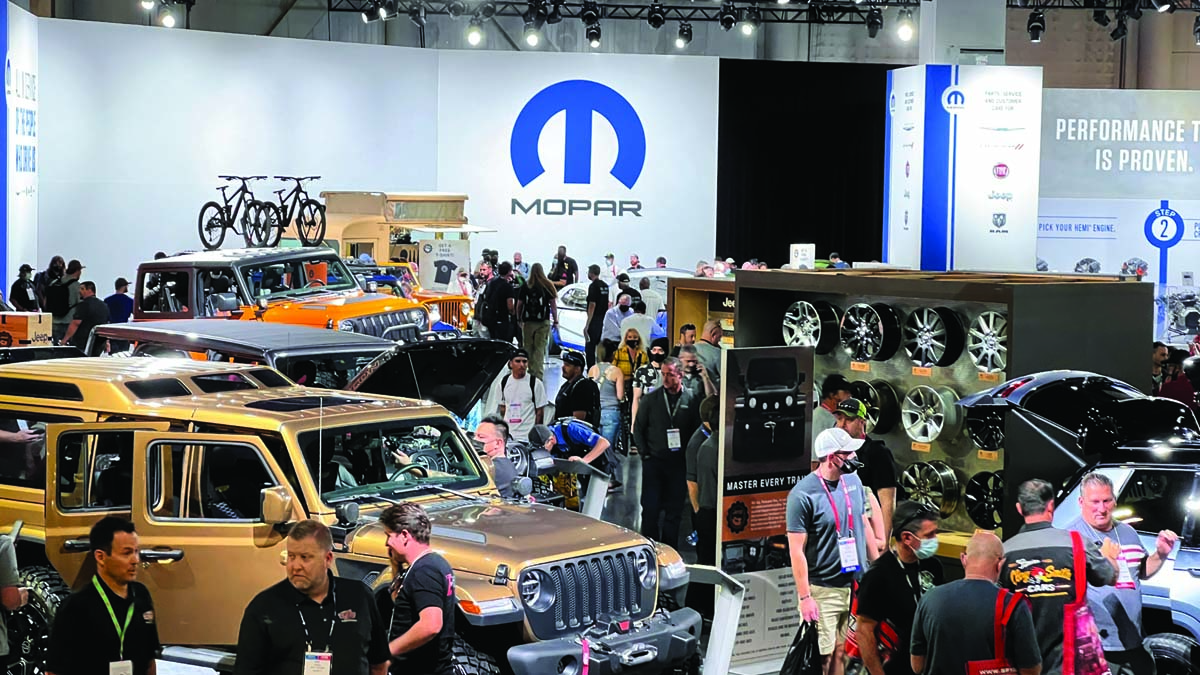 The Wrangler 4xe concept was one of seven concept and custom vehicles Mopar debuted at the 2021 SEMA show, all bar one of which was based on a Jeep or RAM vehicle, reflecting the prominence of these brands under the Stellantis umbrella.

Mopar’s exhibition space at SEMA also featured concepts that made their debut earlier in 2021 at the Easter Jeep Safari. These included the ‘Jeepster Beach’ concept, ‘Magneto’ Wrangler EV and Gladiator-based ‘Top Dog’ with an Aussie-made PCOR canopy.