Jeep have tapped into their military heritage several times in the past when creating concepts for the annual Easter Jeep Safari. This year, they honoured that heritage again with the Wrangler ’41. 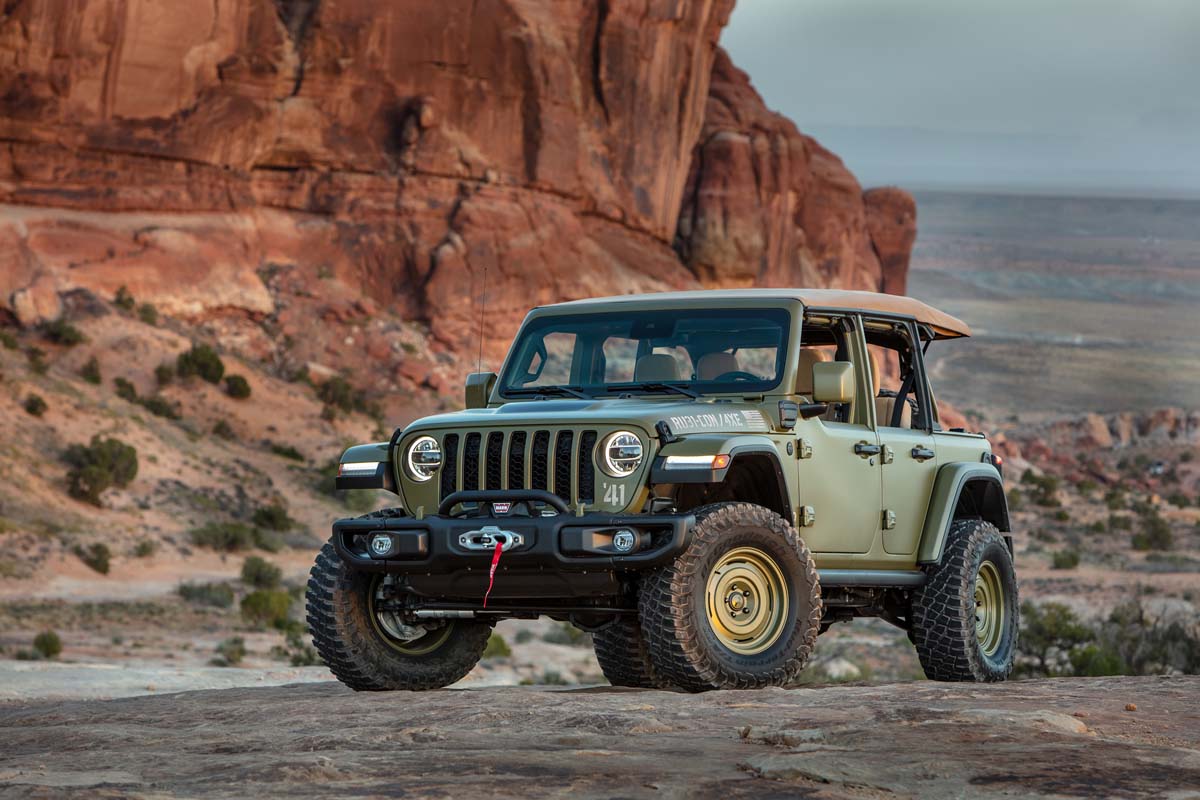 Showing obvious influences of the original Jeep – the Willys MB / Ford GPW from World War II - the Wrangler ’41 was one of four Wrangler-based concepts at this year’s 55th Easter Jeep Safari.

To a Wrangler Rubicon 4xe base, the ’41 concept adds some touches from last year’s Wrangler Unlimited Willys production model, then adds some WWII-inspired paint and detailing. The finished result combines the latest 4xe plug-in hybrid drivetrain with the looks of an historic model from Jeep’s past. 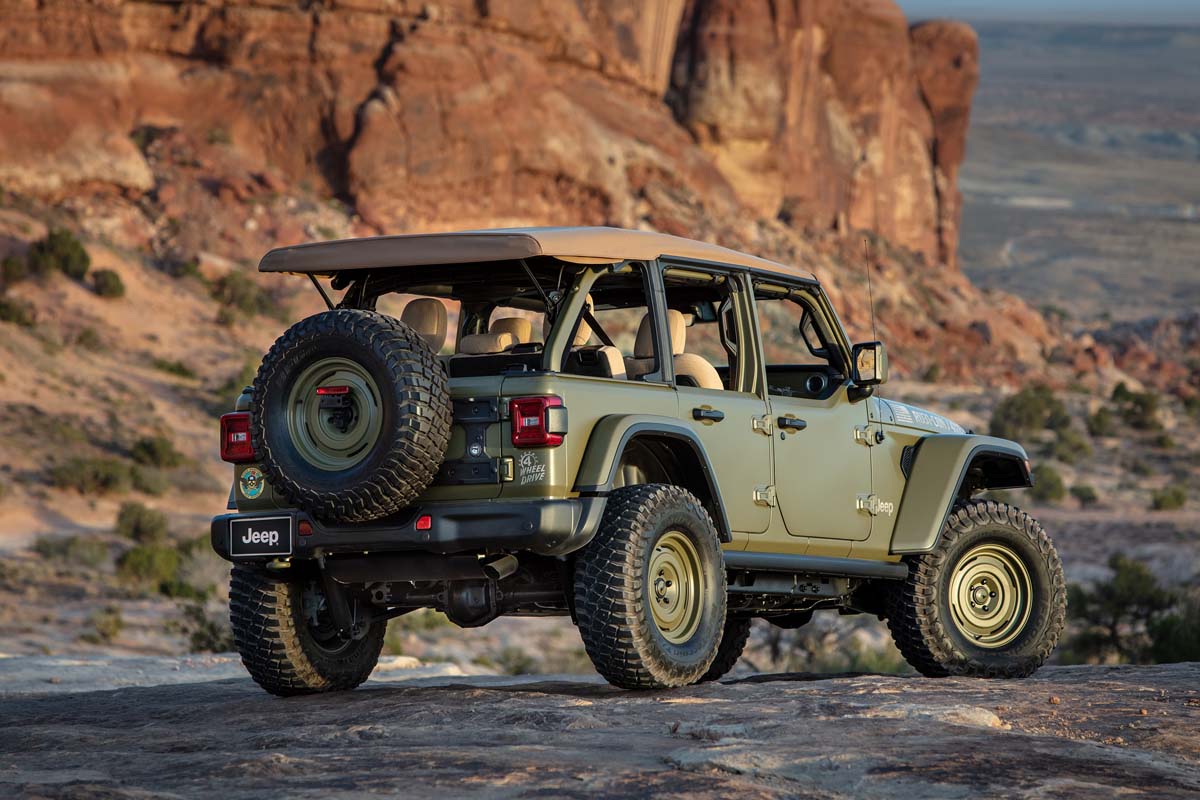 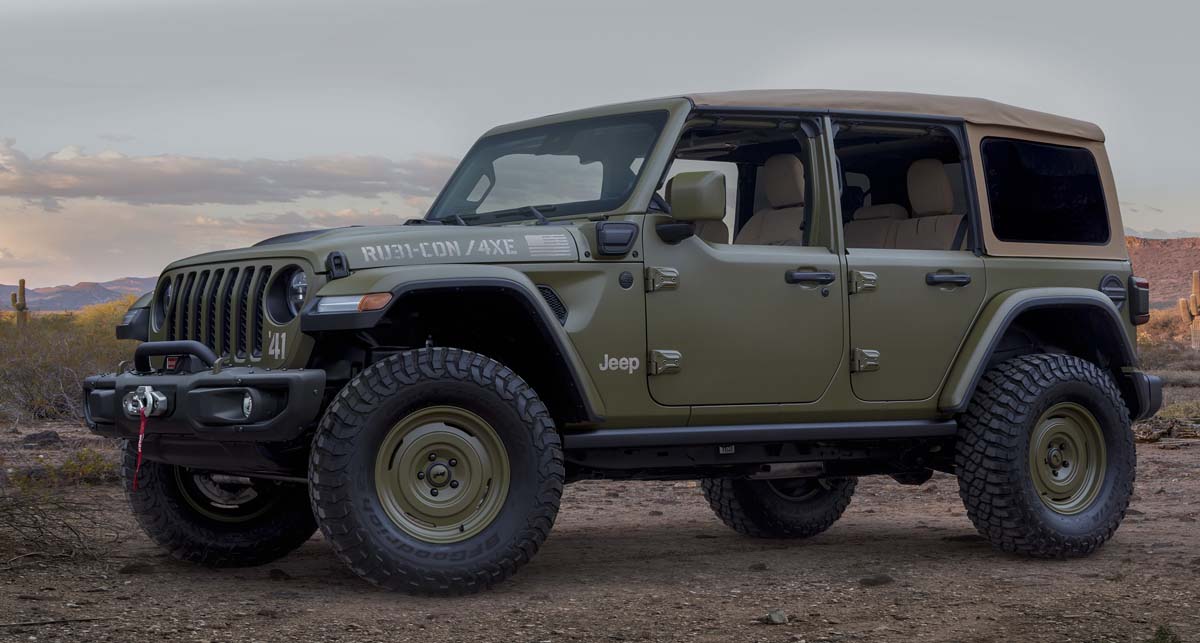 This combination delivers an impressive 283kW and 637Nm in the four-door Wrangler 4xe, which Jeep describe as the most capable, technically advanced and eco-friendly Wrangler ever. In the case of the ’41 concept, its lighter, stripped back exterior means it probably offers slightly more performance than the factory numbers. 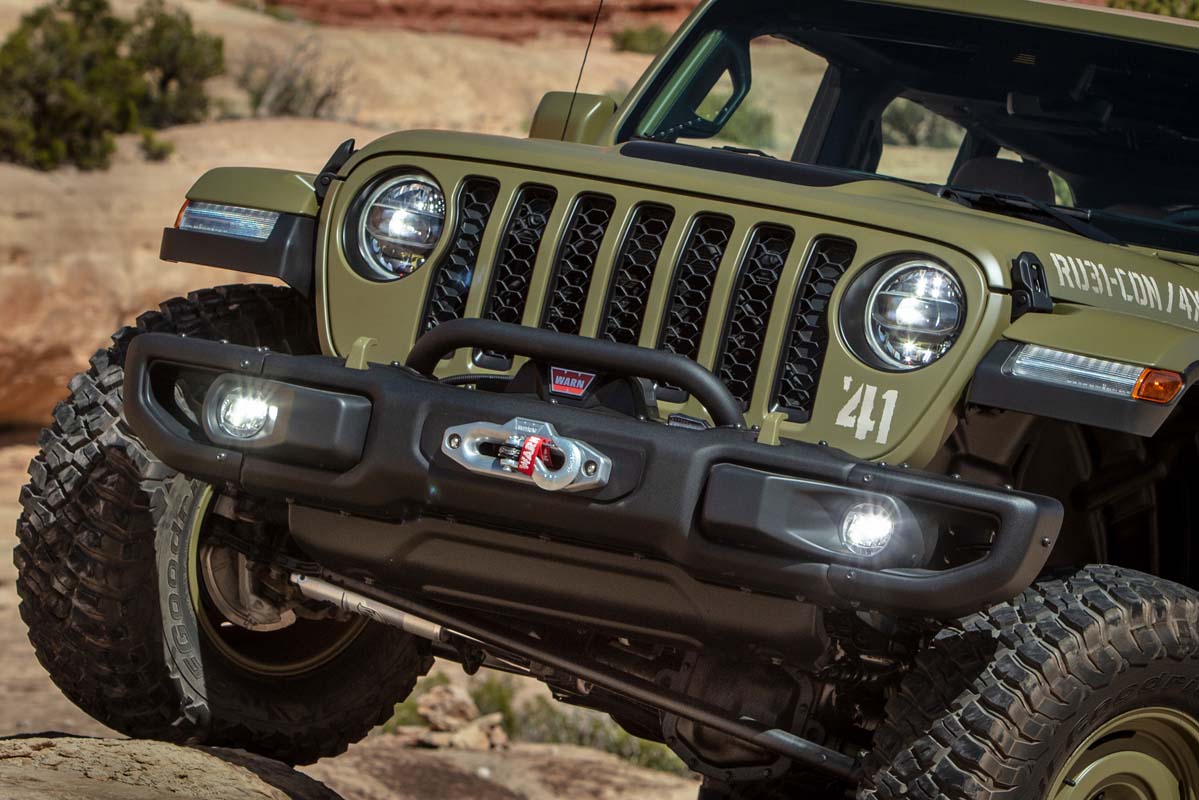 To increase the Wrangler ‘41’s off-road capability, a Jeep Performance Parts (JPP) 2-inch lift kit is fitted, along with 35-inch BF Goodrich Mud Terrain T/A tyres, but instead of the modern alloys or beadlocks you might expect, the Wrangler ’41 rolls on a set of ‘Analog HD’ wheels from US company Fifteen52. Inspired by the solid steel wheels fitted to the Willys MB, these aluminium alloy rims not only look like the originals, but at 17-inch diameter, they’re only an inch bigger than the originals, too. 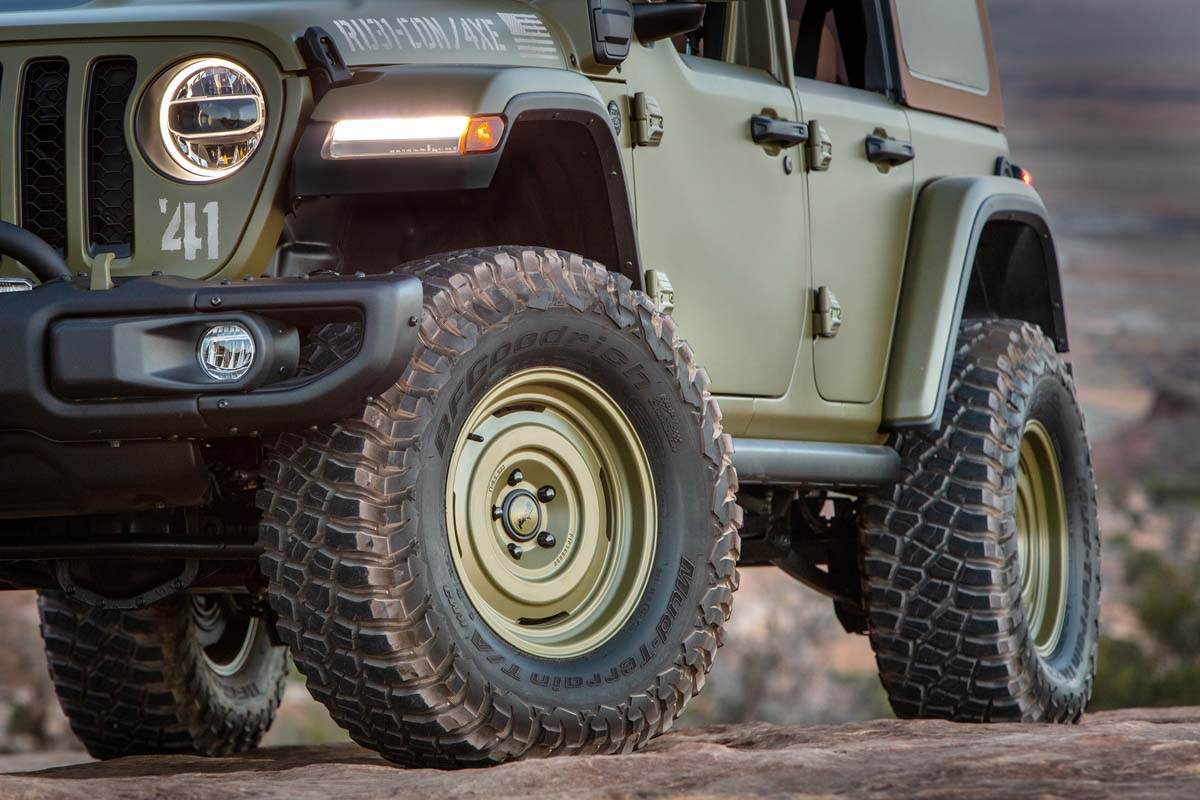 The wheels are finished in a special matte green paint that Jeep call ‘D.R.A.B.’ What that acronym actually stands for isn’t explained, but the colour is very much in the spirit of the olive drab applied to hundreds of thousands of Jeeps and other military vehicles during WWII.

In this instance, D.R.A.B. covers not only the wheels, but almost the entirety of the ’41 concept’s body, including Wrangler features that are usually finished in a contrast colour, like the grille, mirror caps, wheelarch flares and tow hooks. 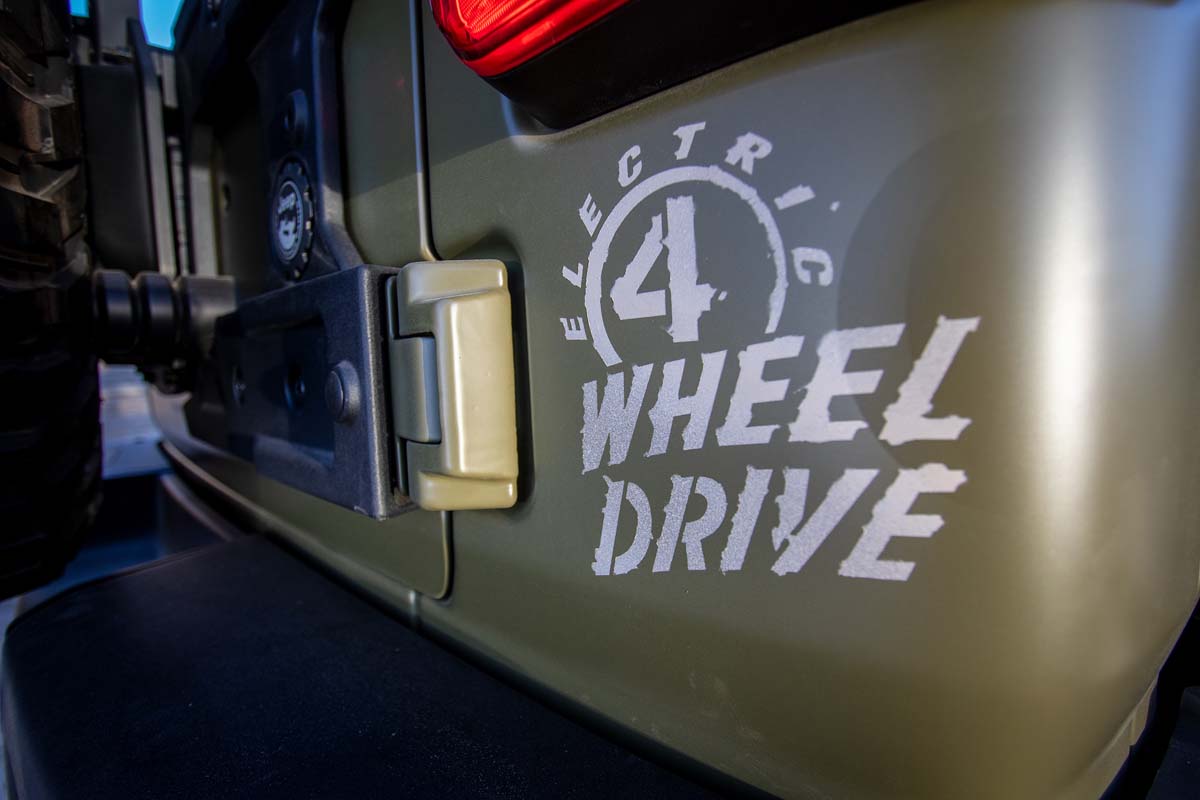 Military-style stencils from the Jeep Graphics Studio adorn the bonnet, front end and rear, while a decal for ‘Design Operations – Jeep Division’ above the left rear bumper is reminiscent of divisional insignia.

Some contrast from all that matte green comes in the form of black wheelarch trim and black powdercoated bumpers, with the front bumper adding a Warn winch and protective JPP bumper loop. 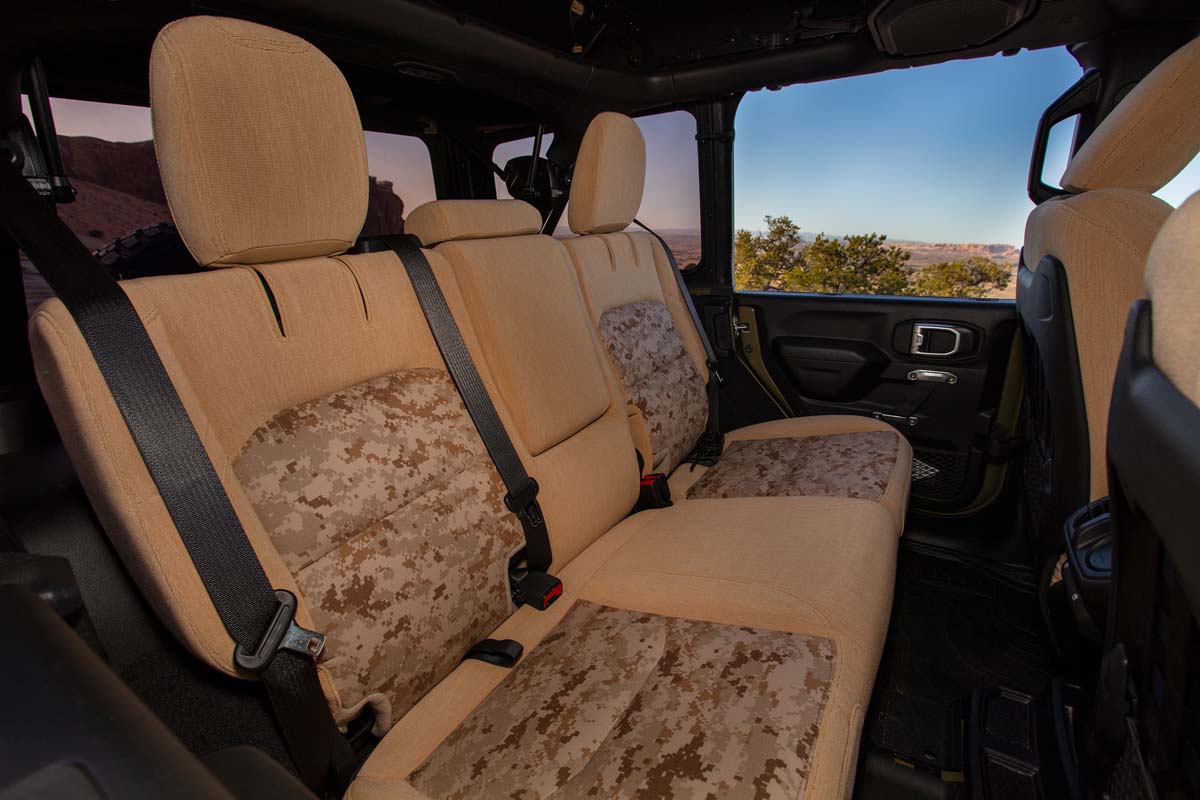 JPP half doors are fitted and the removable soft top is finished in a light tan shade that’s continued on the first- and second-row seat upholstery. Both the soft top and seats are trimmed in canvas instead of the usual vinyl or leather, with the seats also adding modern ‘digital camo’ inserts.

D.R.A.B. is applied to the dash inserts, too, with a custom Willys graphic added to the instrument cluster and an iconic WWII-era image of an “airborne” Willys MB on the passenger-side dash. 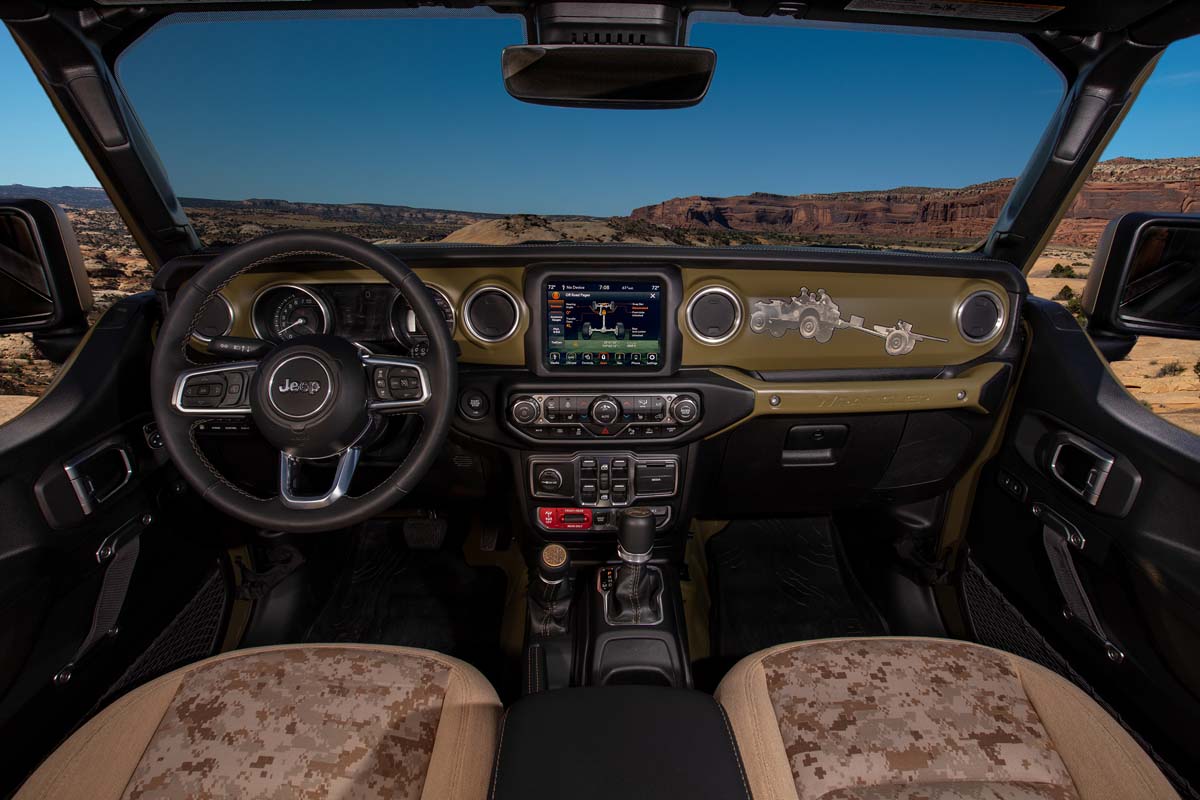 As a finishing touch, both the transmission and hi-lo range shifters feature inserts from the Jeep Graphics Studio on the shifter knob, while the limited weather protection due to the ‘open air’ nature of this concept sees weatherproof Rhino floor lining, also in D.R.A.B., added.

Perhaps not as radical as some of the other military-inspired Jeep creations from the past, the Wrangler ‘41 is nevertheless a standout amongst this year’s Safari concepts