Custom paint, wheels and interior trim on this concept previews Grand Cherokee hybrid for US market.

The concepts created by Jeep for the annual Easter Jeep Safari in Moab, Utah, are usually pretty wacky, so the inclusion of a mildly-modified version of the Grand Cherokee Trailhawk this year was a change of pace. 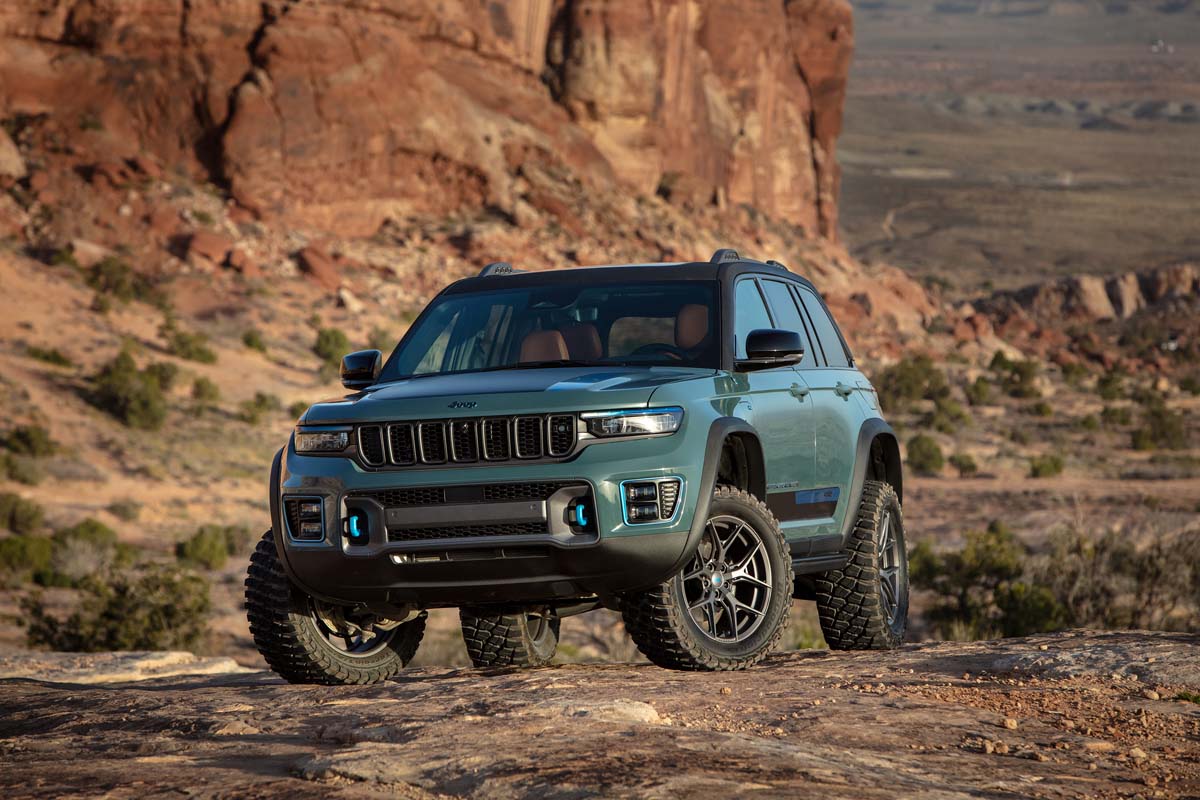 While it’s undoubtedly an unconventional choice for an Easter Jeep Safari concept, the Grand Cherokee Trailhawk in hybrid ‘4xe’ form was selected to preview the production Grand Cherokee 4xe, which was launched just prior to the Safari in April and will be released in the US later this year. 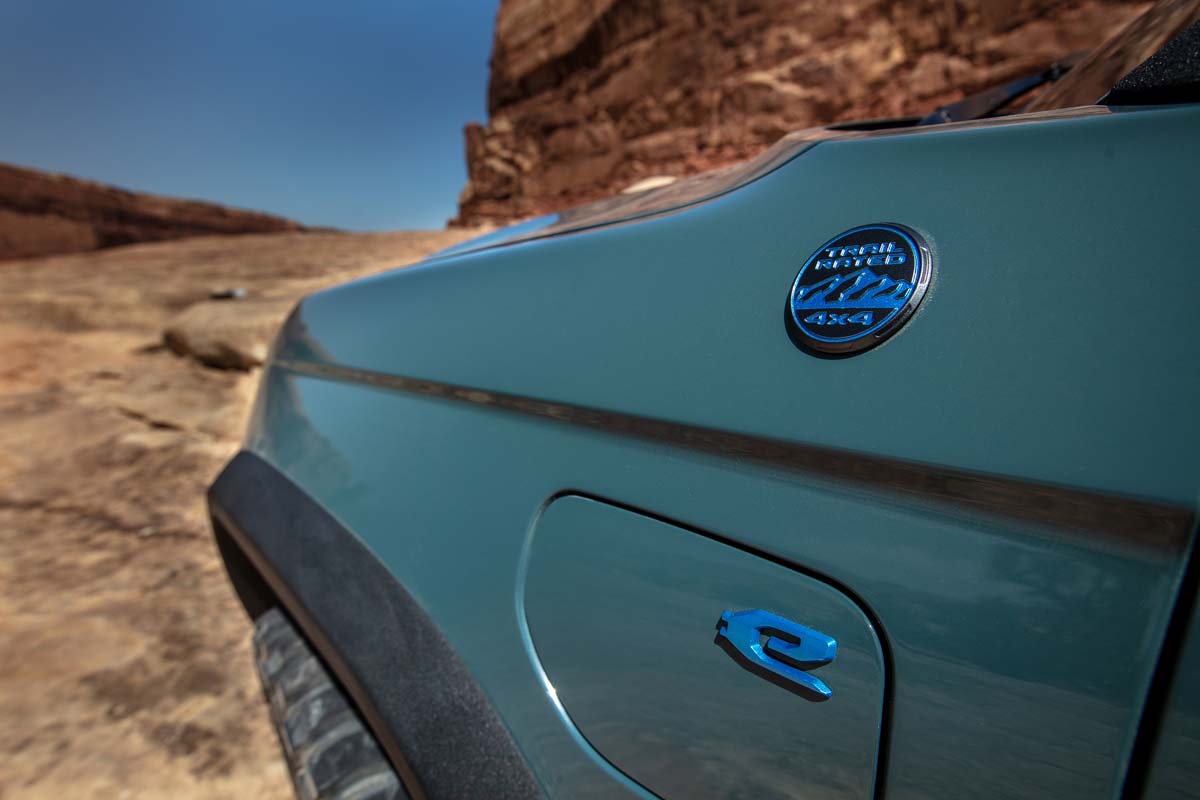 With a plug-in hybrid system paired with a 2.0-litre turbocharged petrol four-cylinder engine producing 200kW and 400Nm, fuel economy in the Grand Cherokee 4xe is listed at 4.2lt/100km, with an electric-only range of 40km.

The hybrid powertrain, matched to an eight-speed automatic in the production Grand Cherokee 4xe, isn’t altered for the concept, nor are things like the electronic sway bar disconnect and adjustable Quadra-Lift air suspension, leaving the focus on the exterior and interior aesthetics. 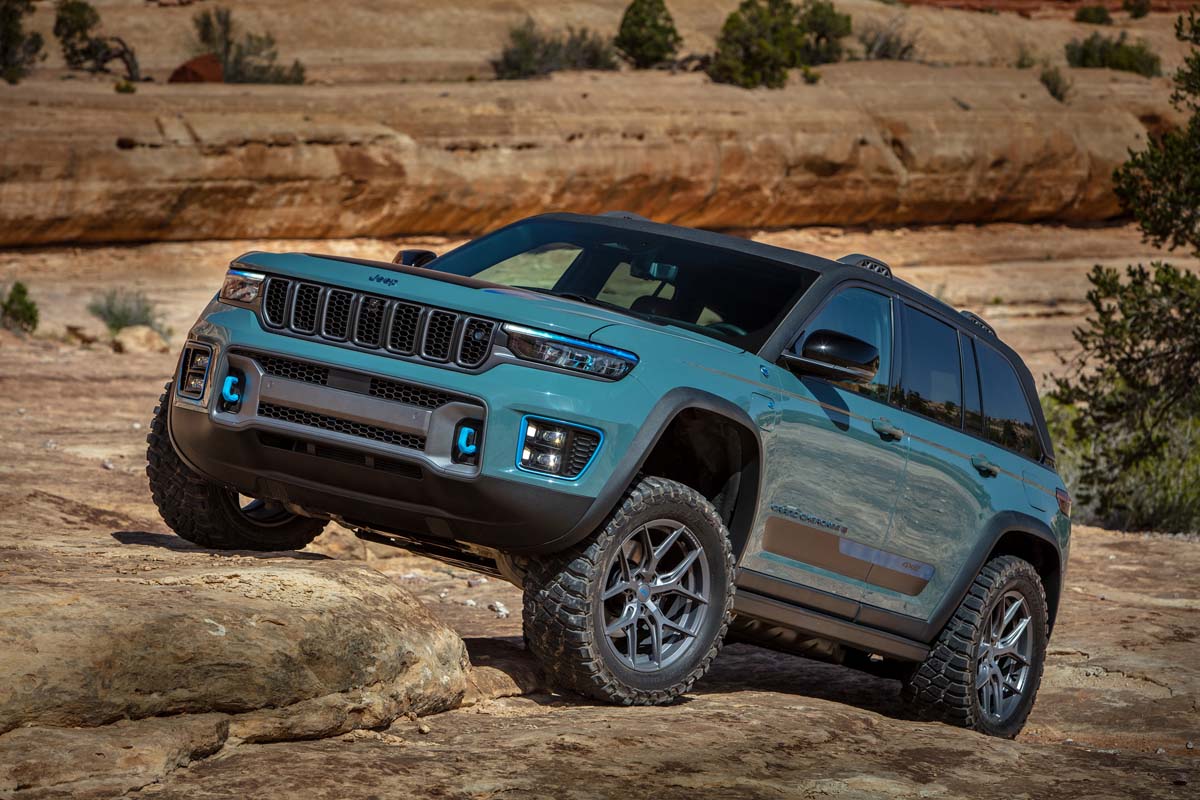 Outside, this concept is finished in a unique Industrial Blue, with Lagoon Blue accents on the tow hooks, wheels caps and badging, as well as the custom foglamp surrounds that are fitted with quad LED projector lamps in this instance. 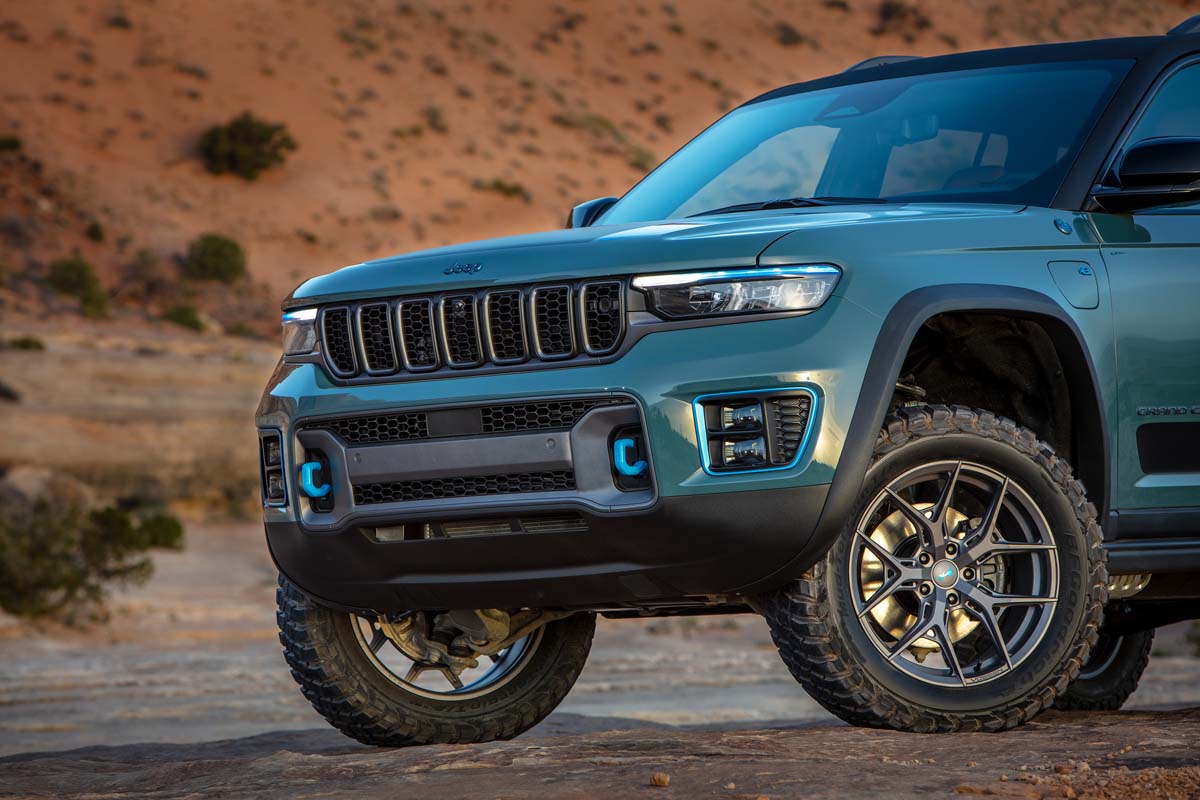 Lagoon Blue and related light blue shades have become signature colours for 4xe hybrid/electric models in the Jeep range, so expect to see these colours applied to other hybridised and fully electric concept and production models in the future. 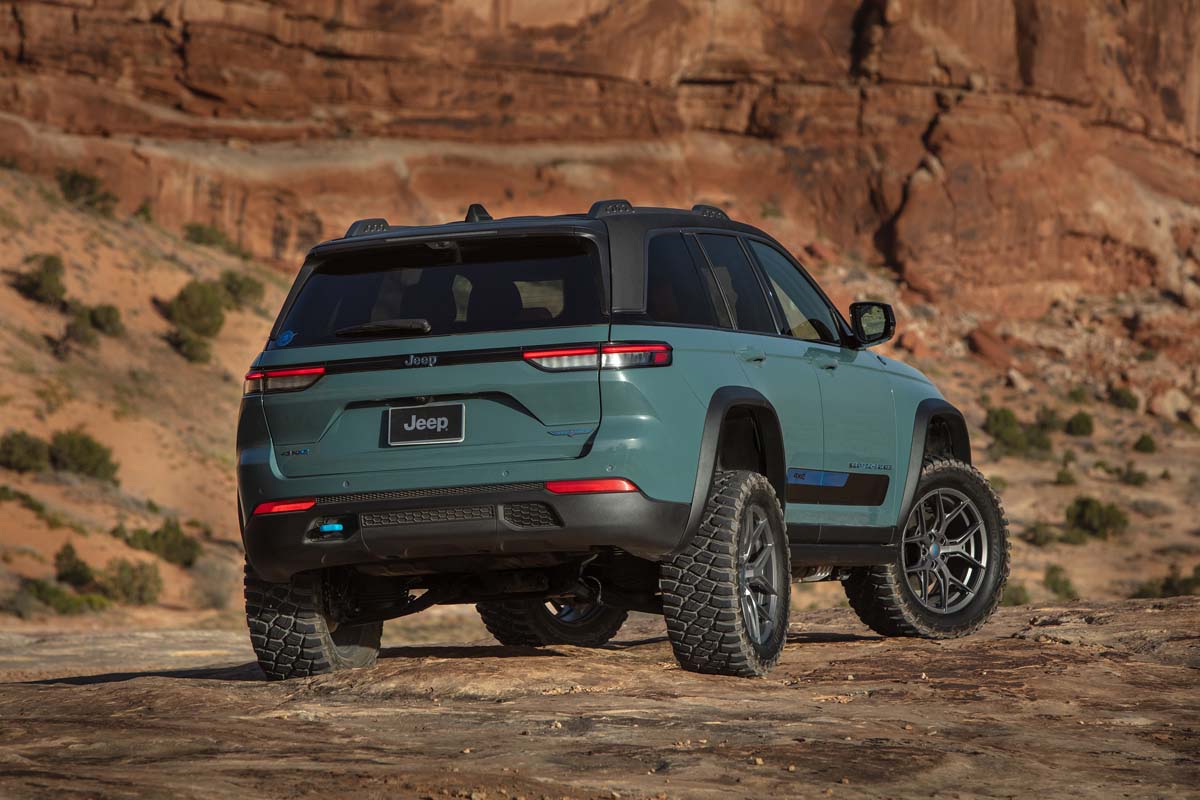 The Grand Cherokee Trailhawk 4xe concept’s bonnet features a low-glare matte black and blue Trailhawk decal, while decals on the lower flanks not only identify the hybrid 4xe drivetrain, but also offer protection against scuffs and minor scrapes off-road. Augmenting this protection is a set of subtle Mopar rock rails, finished in black.

Up on the roof, the concept adds a custom roof rack with integral tie-down points, while the roof itself is painted with Rhino Liner for added durability when loaded with gear. 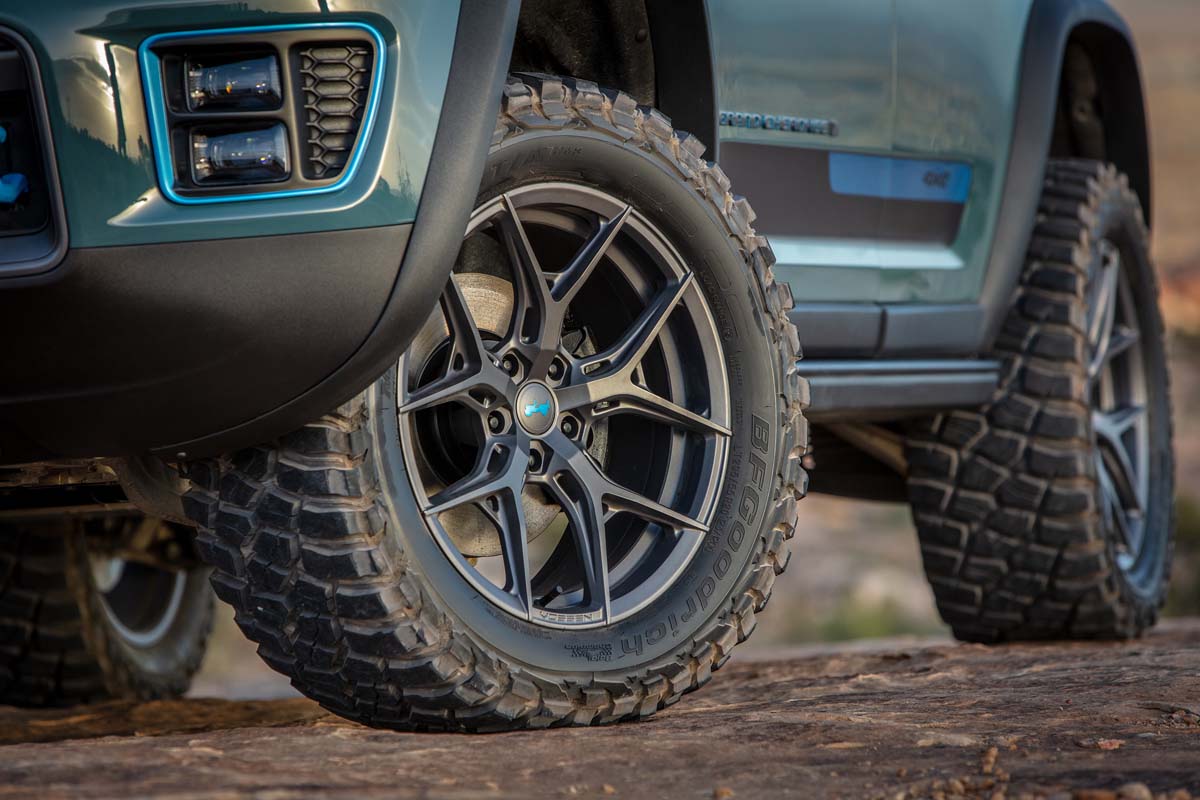 The concept’s wheels are custom 20-inch items, finished in Neutral Gray matte metallic and fitted with 33-inch BF Goodrich mud terrain tyres. To suit this chunkier wheel and tyre combo, the wheelarches are fitted with custom flares that are wider than those on the production Grand Cherokee. 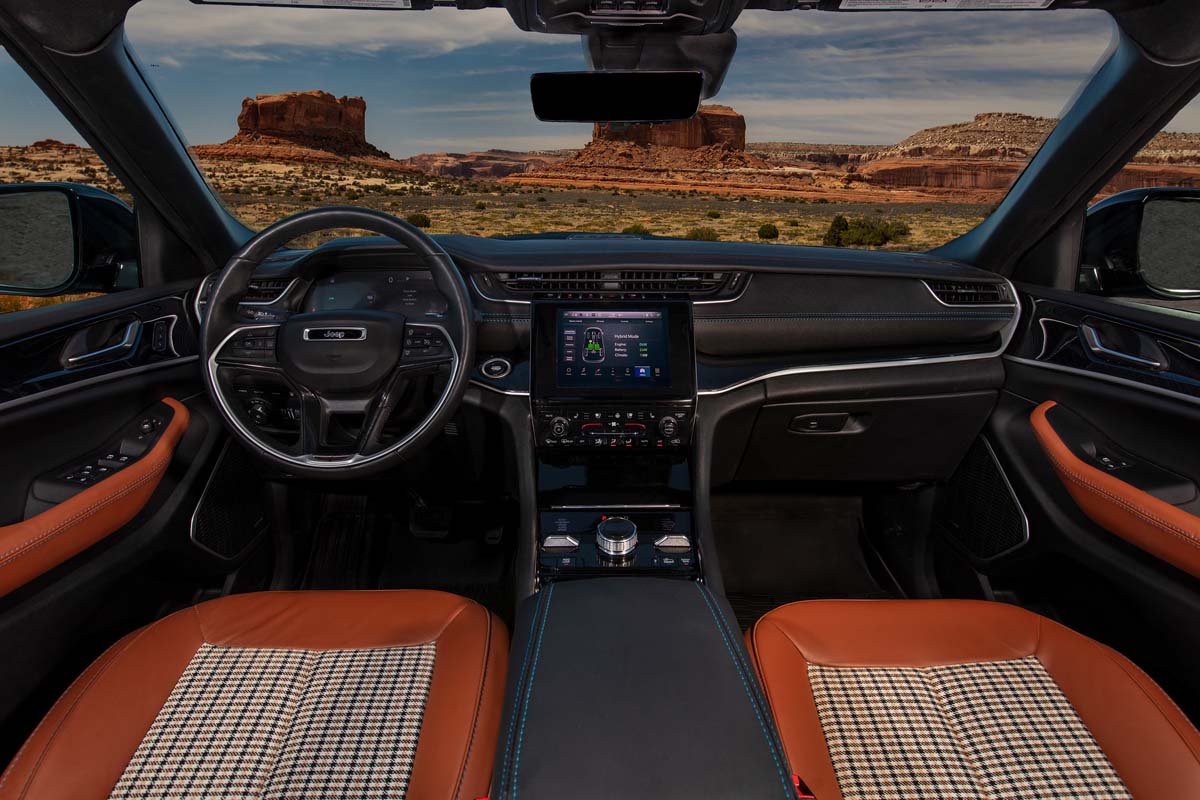 Inside, the front and rear seats are trimmed in a combination of saddle leather and “Rodney” plaid cloth, with Surf Blue stitching and a ‘4xe Trailhawk’ badge embroidered into the front seat uprights.

Saddle leather trim also features on the doorcards, with the rest of the interior, including the dash, instrumentation, steering wheel and pedals, unchanged from the standard Grand Cherokee.