Gladiator transformed into a rolling showroom of Jeep Performance Parts and Mopar accessories.

Every year since 2008, Jeep has presented concept and custom vehicles at the Easter Jeep Safari in Moab, Utah. This year was no exception, with a total of ten bespoke vehicles on show. Seven of these were unveiled for the first time, including the Gladiator-based “D-Coder”. 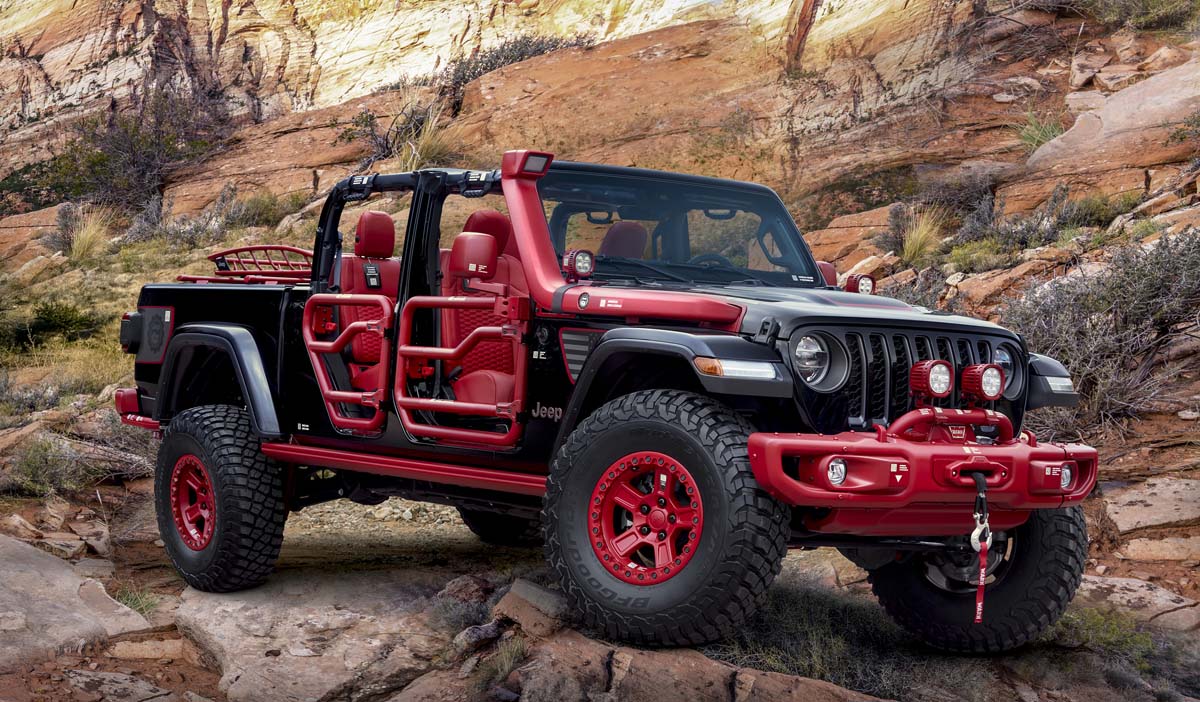 In terms of customisation and bespoke touches, the D-Coder isn’t the most radical of the Jeep concepts, even amongst this year’s offerings that are all clearly based on existing production vehicles. The D-Coder is perhaps the most striking, though, thanks to its bold red and black colour scheme and the fact it’s absolutely festooned with Jeep Performance Parts (JPP) and Mopar accessories. 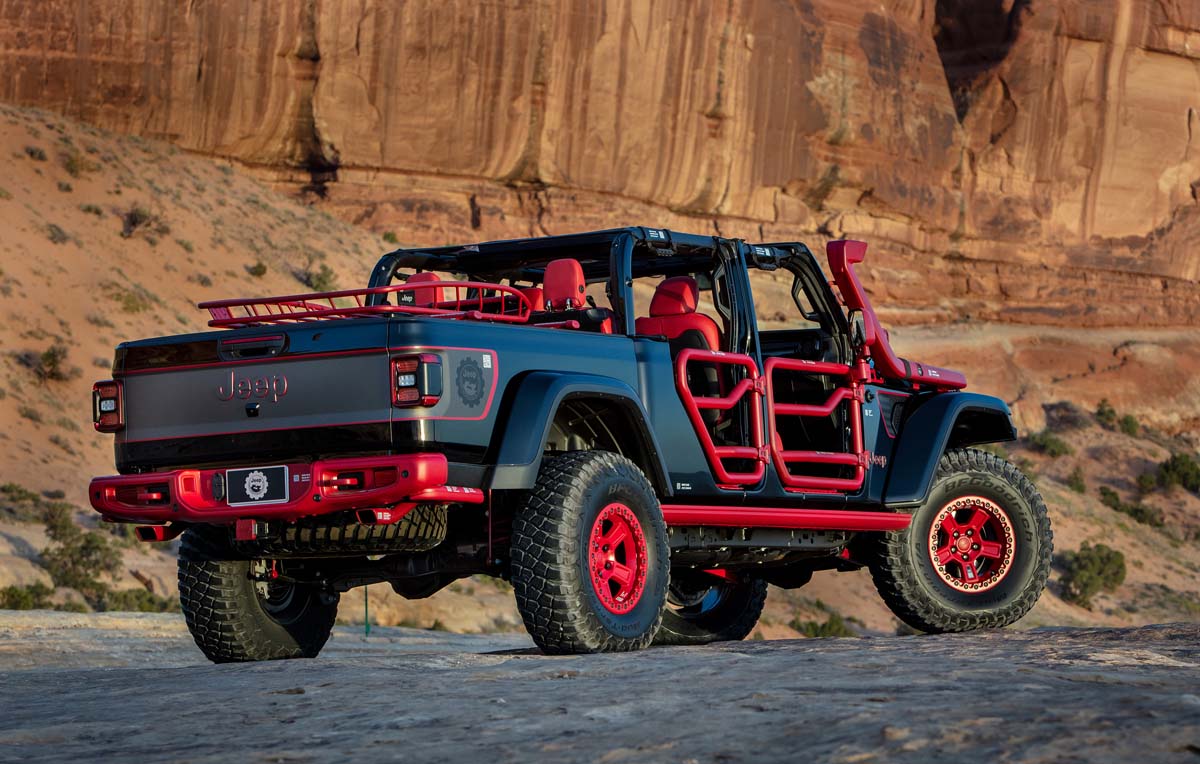 To identify all of the 35+ bolt-on bits fitted to the D-Coder, each one is finished in Maraschino Red and carries a QR Code. When you scan that code, it takes you to the relevant page at the Mopar eStore – a clever idea. Additionally, enhanced QR codes on the D-Coder’s bonnet and tub take you to the latest JPP catalogue. 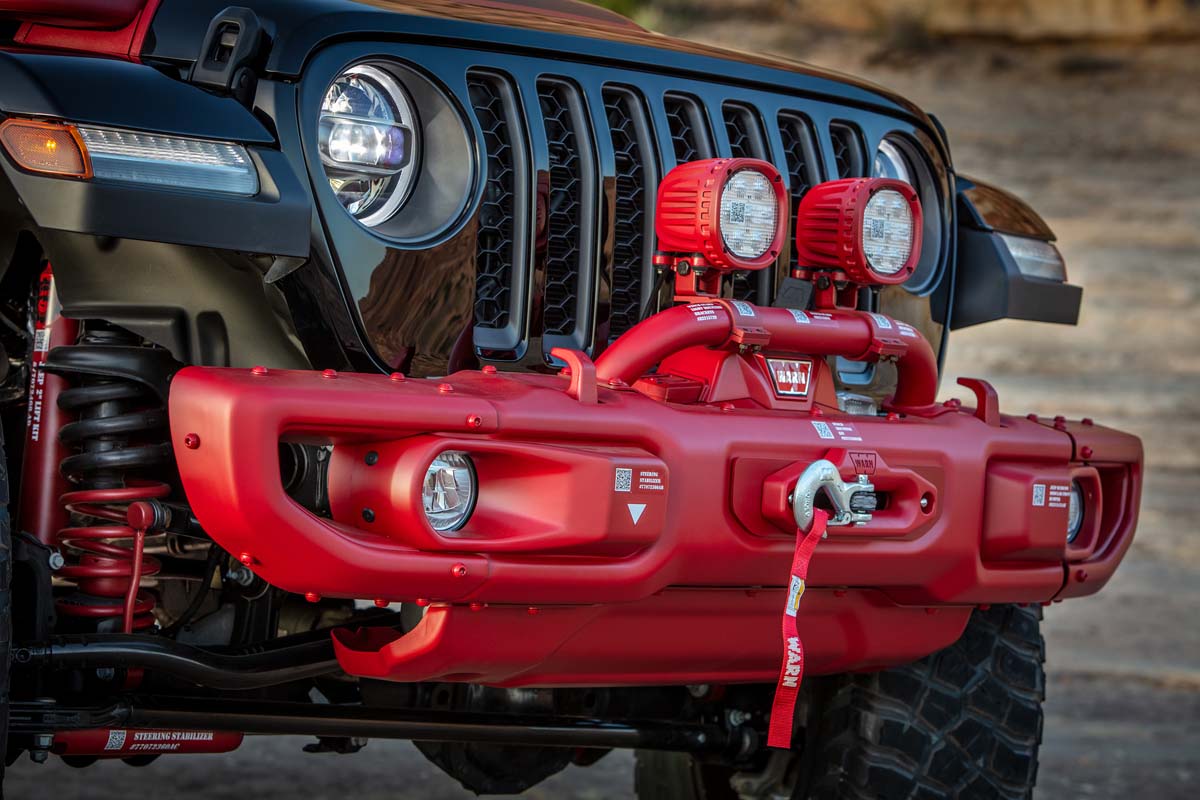 Parts fitted to this rolling catalogue start with a Rubicon three-piece modular bumper that carries a JPP single-loop tubular guard for the grille and also incorporates a Warn winch. Atop that loop guard, a pair of JPP ‘TYRI’ 7-inch LED lights are fitted, with an additional pair of TYRI 5-inch LED lights mounted on the A-pillars using JPP brackets. The snorkel is a JPP item, too, as is the toughened ‘Gorilla Glass’ windscreen. 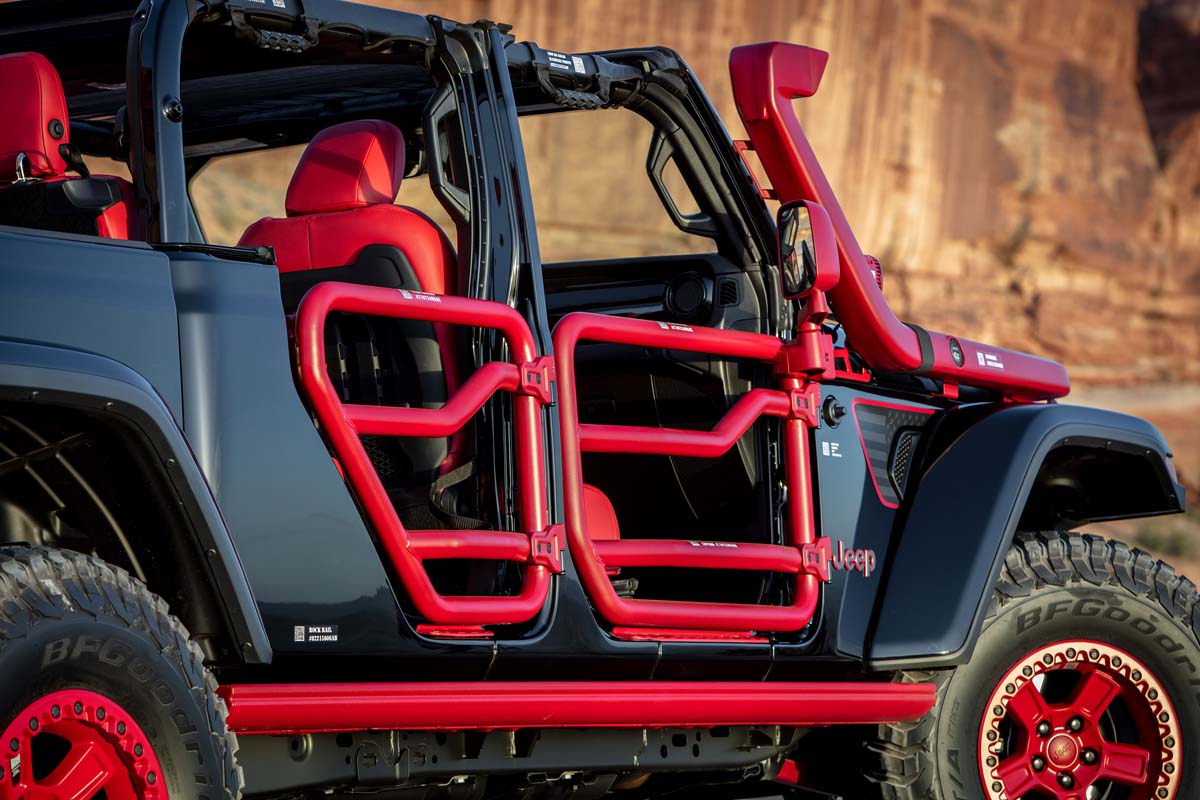 Rock rails between the wheelarches are JPP units in heavy-gauge steel, with additional rails added behind the rear wheels and fitted with replaceable nylon trim covers. The tube half-doors and mirrors come from the JPP catalogue, too. 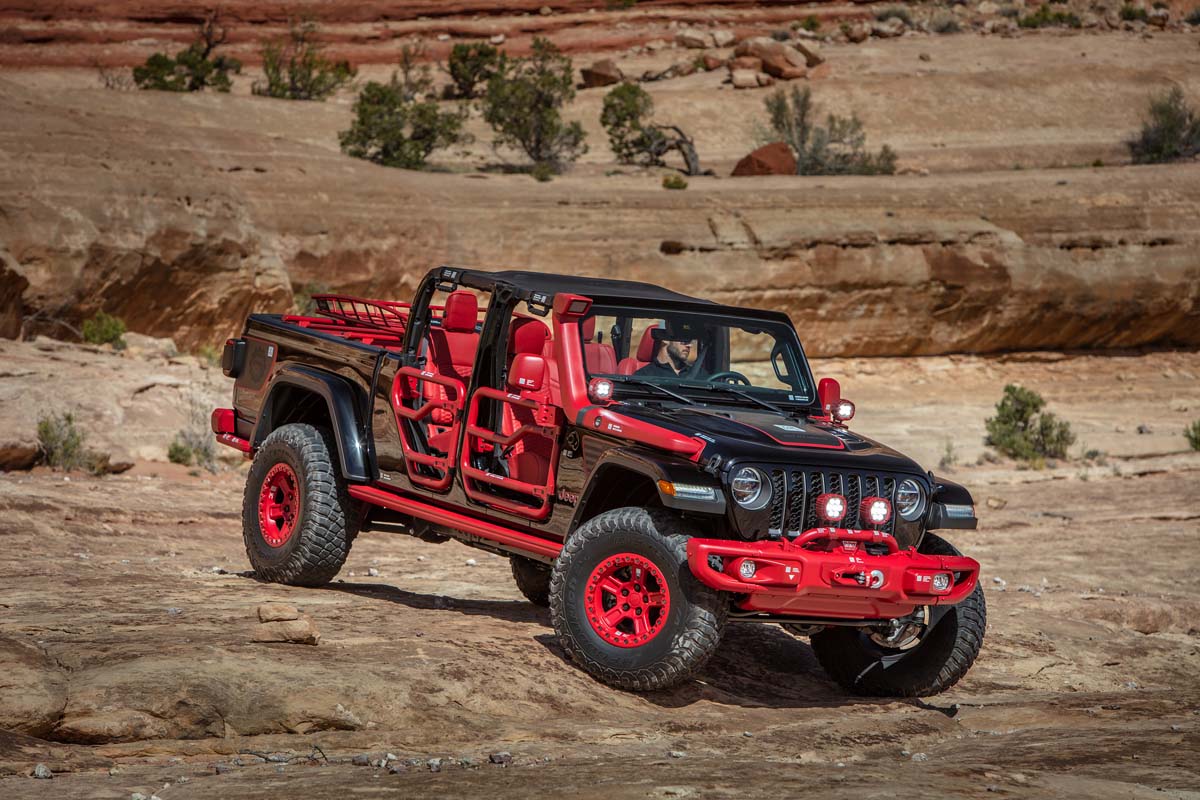 A JPP 2-inch lift kit is a fairly common feature on these concepts, but a new element is that these lift kits are now fitted with FOX shocks. At this year’s Easter Jeep Safari, the Wrangler-based Birdcage concept also carried this new lift and shock combination. 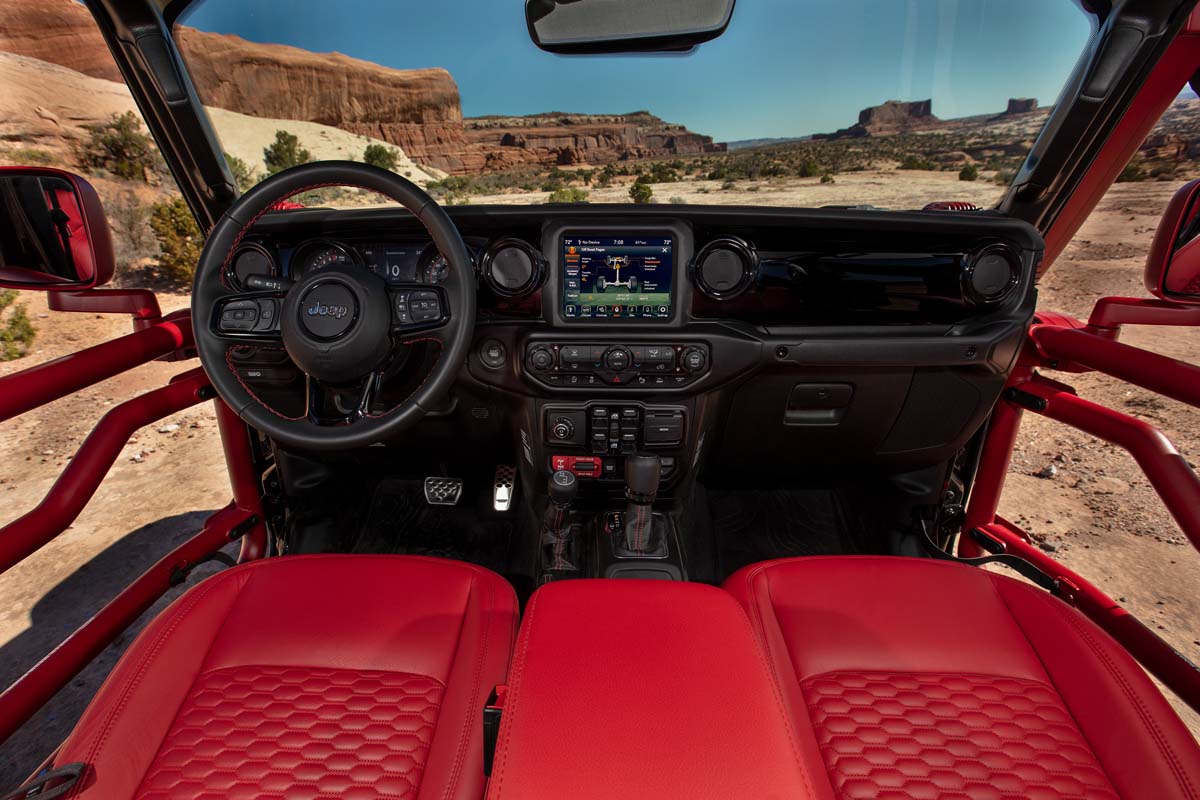 To make for easier passenger entry into this lifted concept, Mopar grab handles are added, while a Mopar mesh sunbonnet stretches over the cabin to provide some shade.

The Katzkin front and rear seats, finished in bold red leather, are also part of the JPP accessories range. Scanning the QR codes on these will not only take you to the catalogue page, but also show the range of trim options, including colours, stitching and accents.

Along with the grab handles and sunshade, other Mopar accessories in the D-Coder include sill guards, stainless steel pedals with rubber grippers and all-weather floor mats. 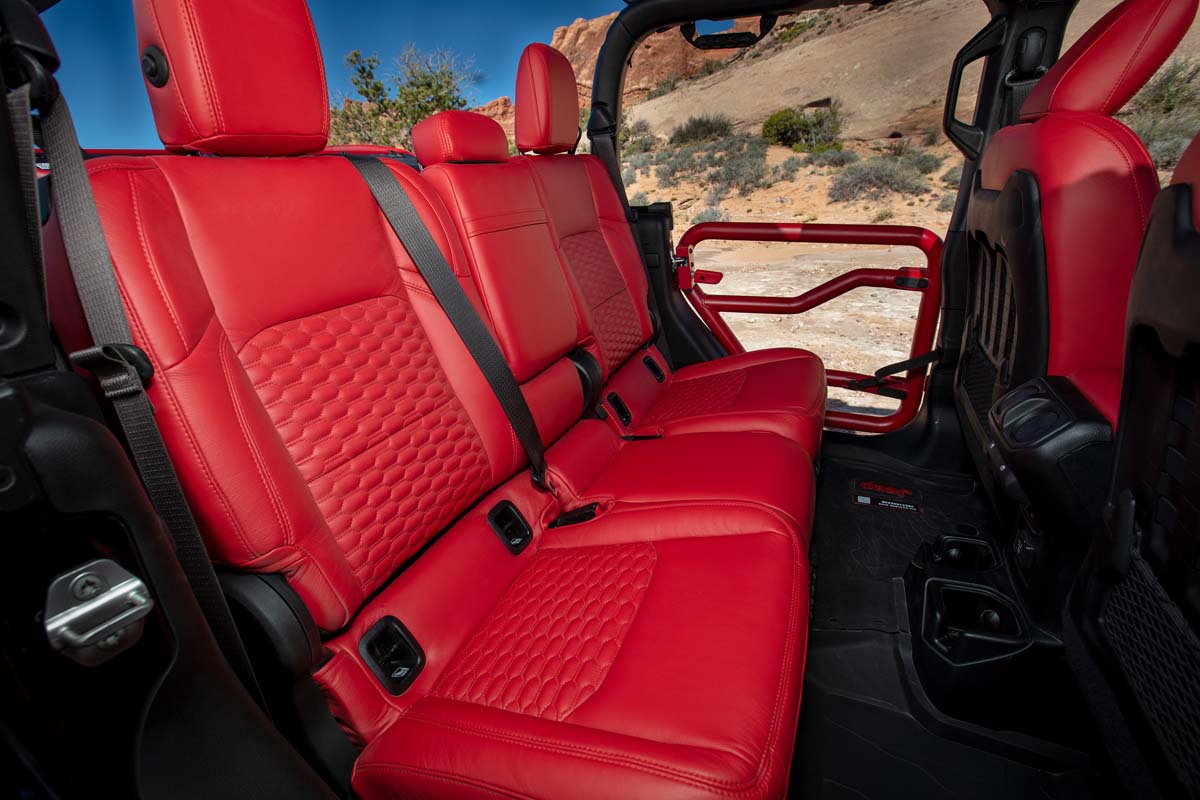 Under the bonnet, there’s a 3.6-litre naturally aspirated petrol V6 that’s standard in Australian-delivered Gladiators, but is enhanced in the concept with a cold-air intake and cat-back dual exhaust system, both of which are from Mopar.

Finally, the D-Coder’s tub features a Mopar spray-in bedliner, while the addition of Trail Rail system rails on top allows for a Thule low-profile cargo basket to be added. 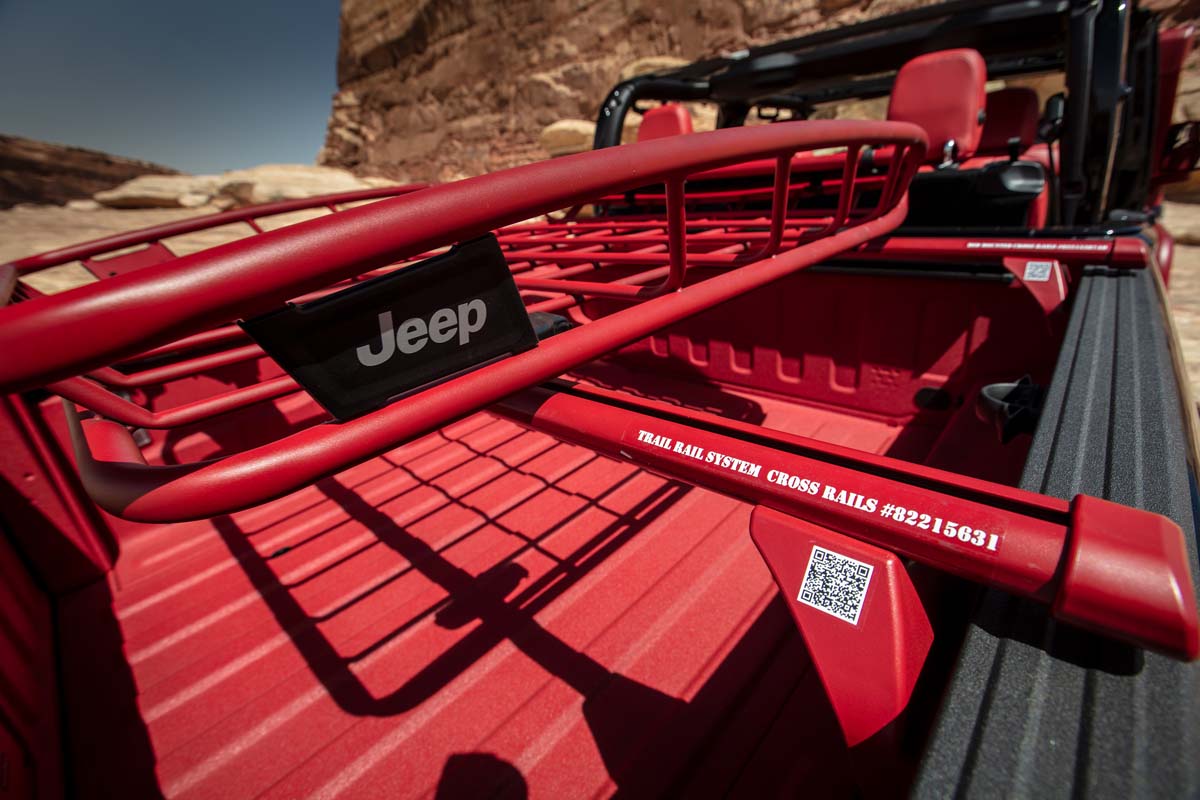 Most of the Jeep concepts presented annually at Moab are showcases of new and upcoming products to a certain degree, but the D-Coder really ups the ante in this area and the idea of adding QR Codes to accessory items in this way is sure to find its way into other display and promotional vehicles at new car shows and related trade events in the future.