The question of how far you can go with modification and customisation of a Jeep Gladiator was answered by the American off-road brand at this year’s Easter Jeep Safari. Jeep used the annual event in Moab, Utah, to present seven different concept and custom off-roaders, one of which was the Gladiator ‘Bob’. 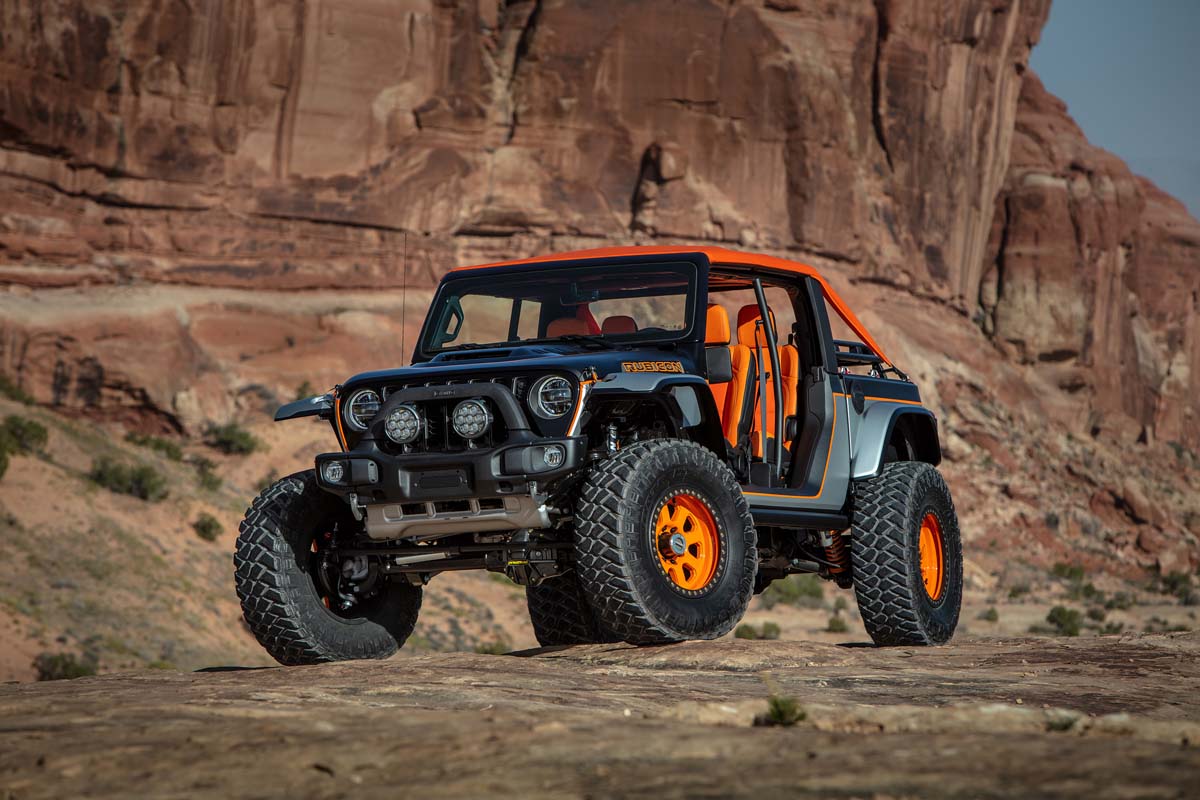 Inspired by stripped-back “bobber” motorcycles that were popular in the 1940s, ‘50s and ‘60s before the chopper style came on the scene, the Gladiator Bob takes a saw to the 4x4 Jeep pickup and significantly shortens it.

Along with a shorter wheelbase, a full 12 inches (305mm) has been taken from the tub length, with second-row seat space pared back, too, creating what Jeeps says is a vehicle that blurs the lines between a Wrangler and Gladiator in terms of its dimensions. 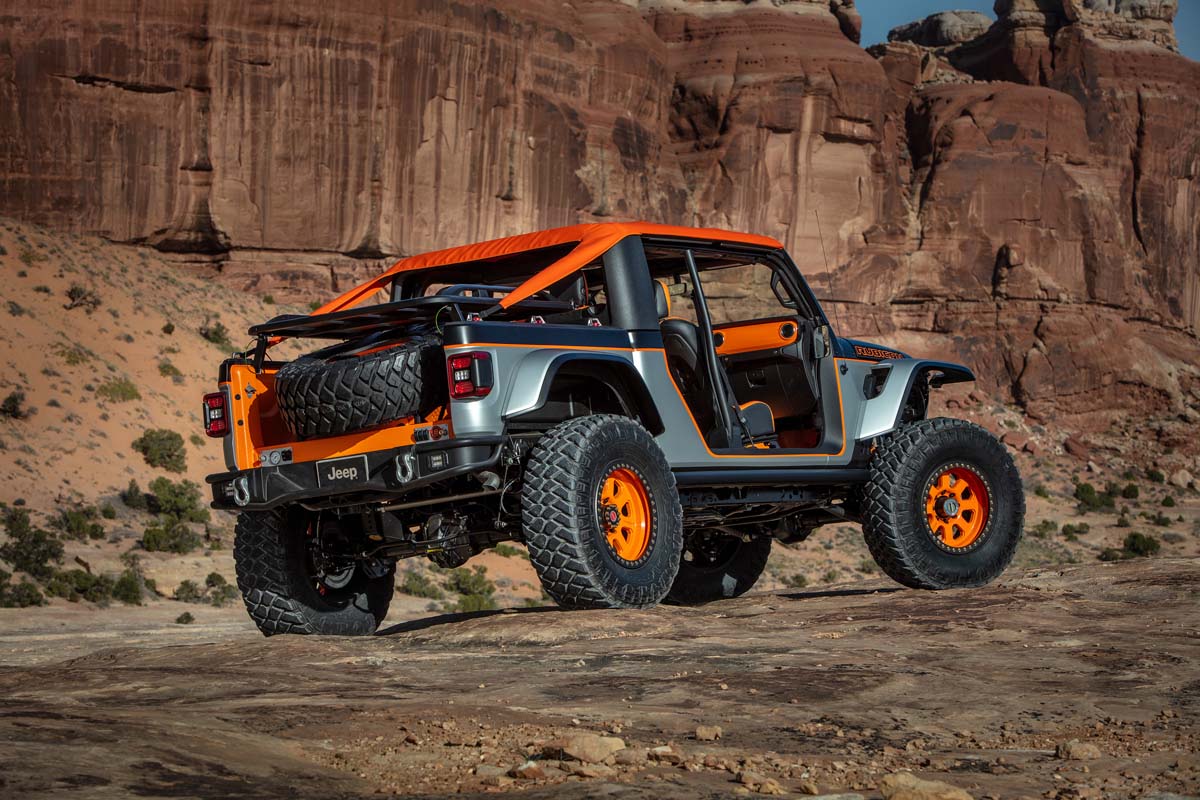 That ‘bare bones’ ethos continues with the removal of all the doors, the B-pillars, tailgate and even the roof. A custom canvas bikini top is fitted in place of the latter and is designed to allow easy access to the truncated cargo tub.

Most of that tub space is filled with a spare wheel, though, so a cargo rack is mounted above, with tie-down points added to the tub sides. 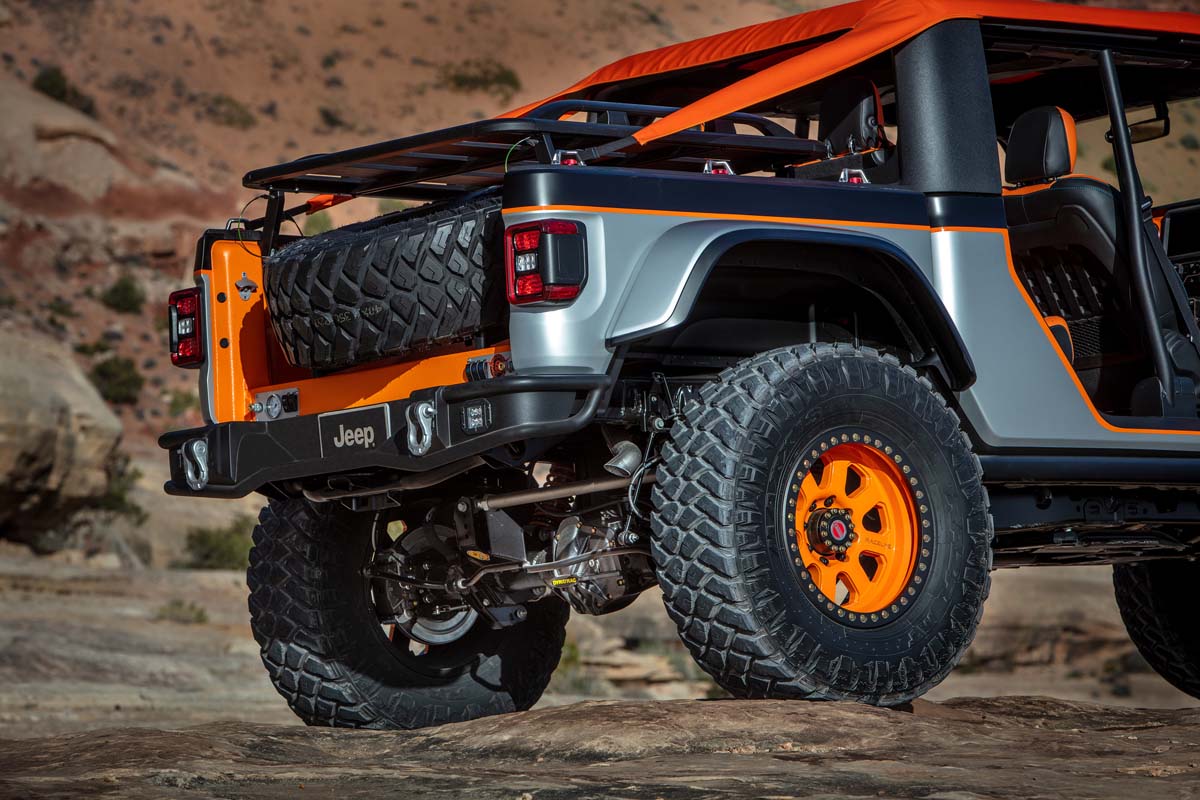 A shorter wheelbase usually means better off-road ability, so in the case of the Bob, this benefit is enhanced with the addition of custom front and rear bumpers designed to improve approach and departure angles.

High-clearance wheelarch flares are also fitted, allowing for larger wheel and tyre combos, which in this instance are 20-inch Raceline beadlocks and 40-inch Maxxis Razr MTs. 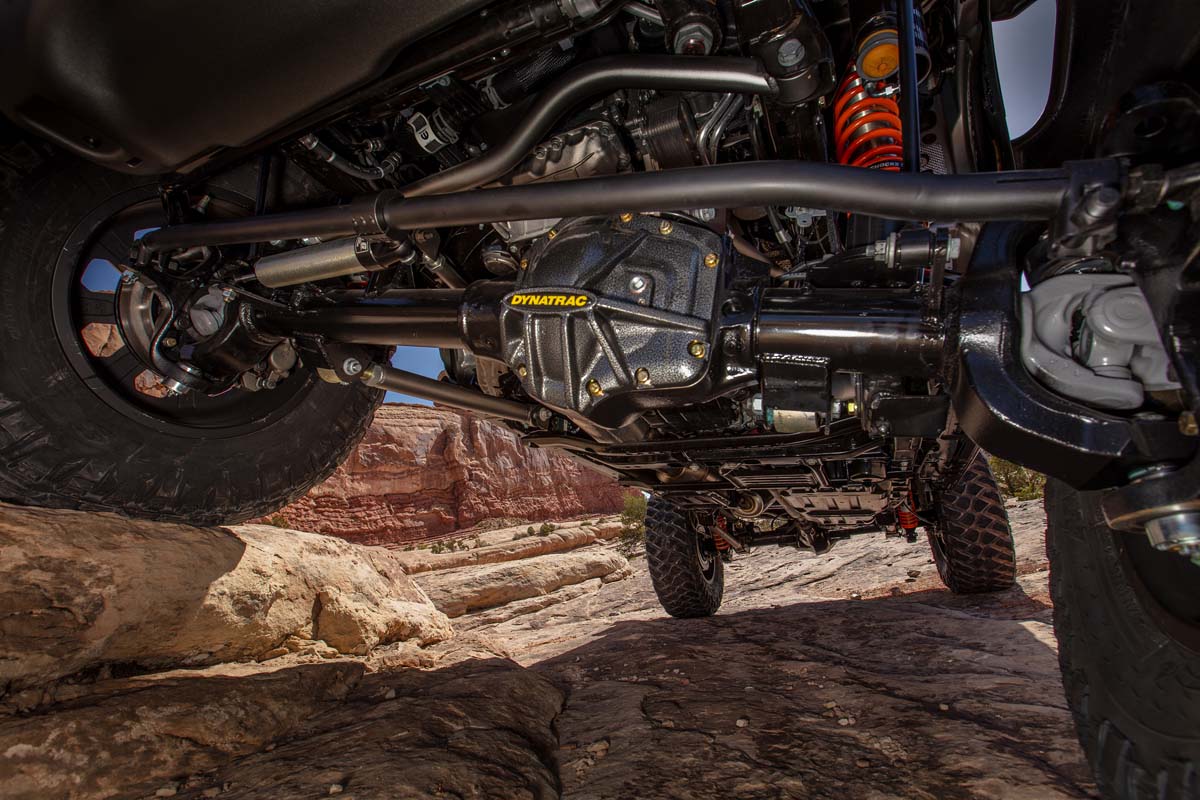 Further improving ground clearance, fording depth and general off-road capability is a 3-inch suspension lift, Dynatrac Pro-Rock 60 axles at each end and custom off-road coil springs and shocks all round.

While the factory axles have been swapped out for those tough Dana units, it’s unclear whether the Gladiator Rubicon’s other standard equipment, like the Off-Road Plus driving mode, electronic front sway bar disconnect and 77.2:1 crawl ratio, remain in place for the Bob concept. 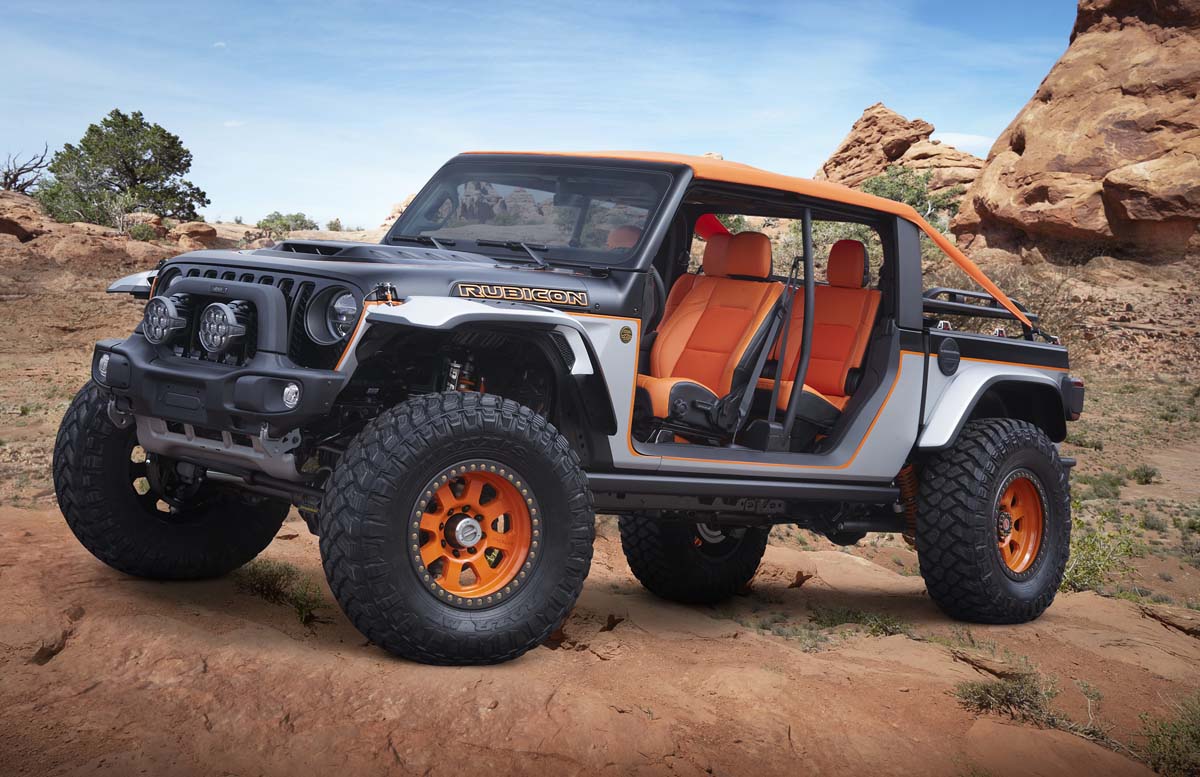 If the cut-back body isn’t enough of a visual hit on its own, the Bob is finished in a multi-colour paint scheme, combining orange, grey and black, as well as a mix of gloss and matte finishes.

The predominantly two-tone effect of black over silver on the concept harks back to similar treatments applied to cars and motorcycles in the past, while the orange adds a touch of flair.

Orange continues inside, on the custom-trimmed seats, dash and floors, which are covered in spray-on bedliner, but the controls and instrumentation are all stock Gladiator Rubicon. 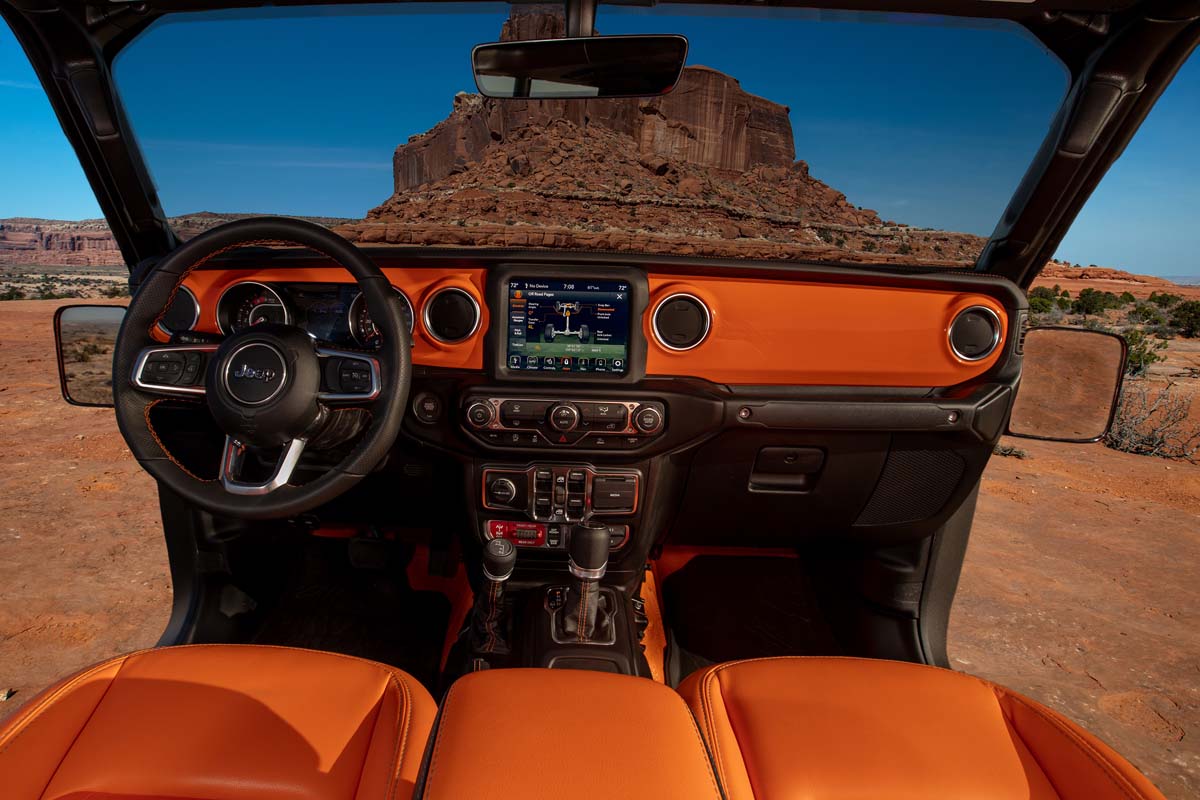 Under the bonnet, the Bob is virtually unchanged from a standard Gladiator, running the 3.0-litre EcoDiesel V6 that’s not offered on Australian-delivered Gladiators, but is available in the US.

Producing 194kW and 600Nm, the EcoDiesel V6 loses out to the 209kW/347Nm Pentastar petrol V6 in terms of power, but easily trumps it for torque.

In the Bob, this turbo diesel engine is enhanced with a Mopar cold air intake that delivers improved performance and better fuel economy, according to Jeep. 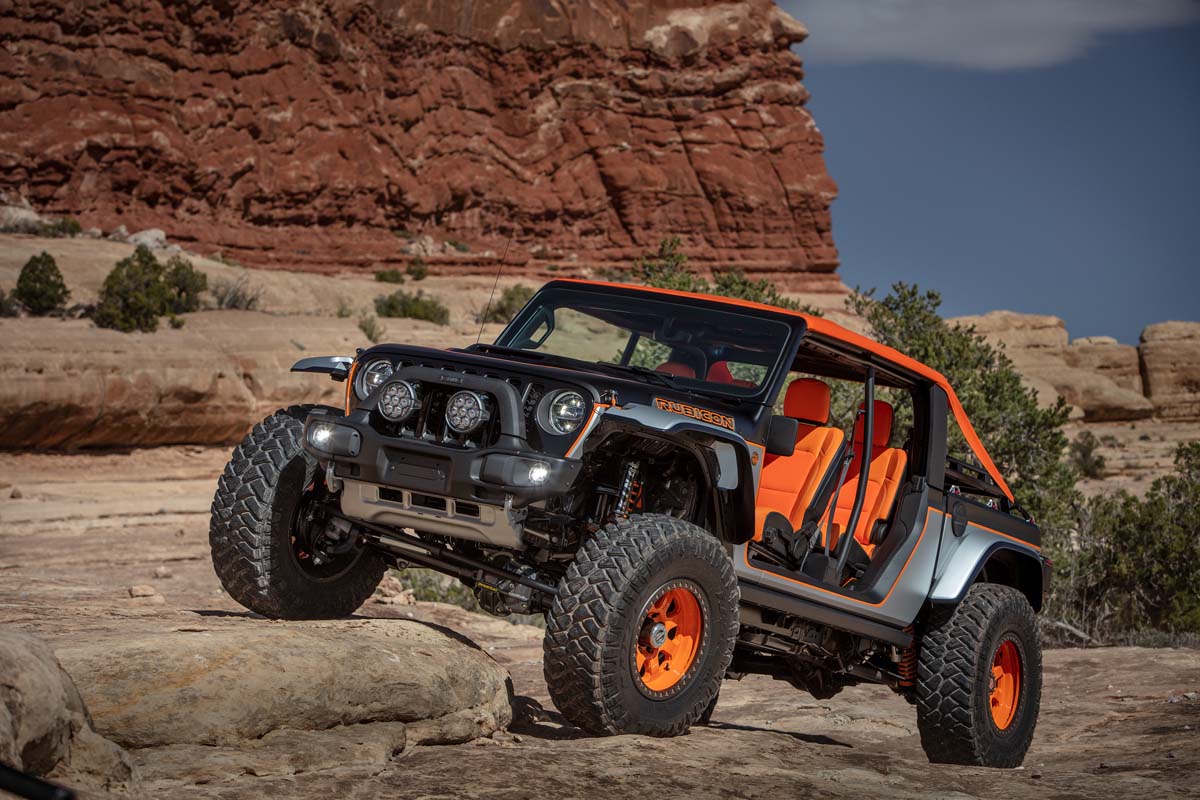 The EcoDiesel V6 is matched to a TorqueFlite eight-speed automatic and Rock-Trac Active on-demand four-wheel drive system, the latter of which is exclusive to the Rubicon in the current Gladiator lineup for the US. Rock-Trac is also fitted as standard to Australian-market versions of the 2022 Gladiator Rubicon, while the Night Eagle (the only other Gladiator grade available locally) uses the Selec-Trac Active on-demand four-wheel drive system.