ARB needs no introduction to the JUST 4x4s audience, or indeed any Aussie off-roader, but they’re building a large following overseas, especially in the US, as evidenced by being asked to be part of Ford’s Bronco project for the Easter Jeep Safari. 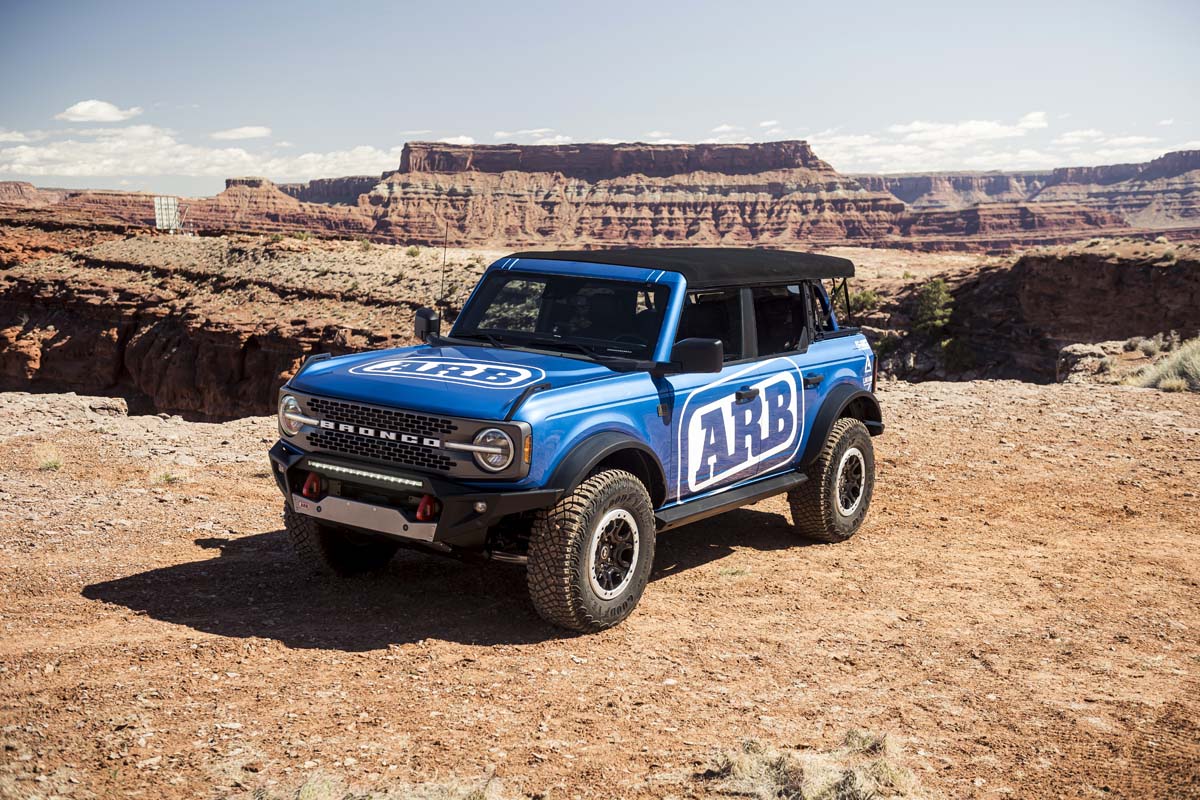 For more than 50 years, the Easter Jeep Safari (also known as the Moab Jeep Safari) has been a mecca for Jeep and four-wheel drive aficionados as they test their 4x4s on the region’s challenging trails. 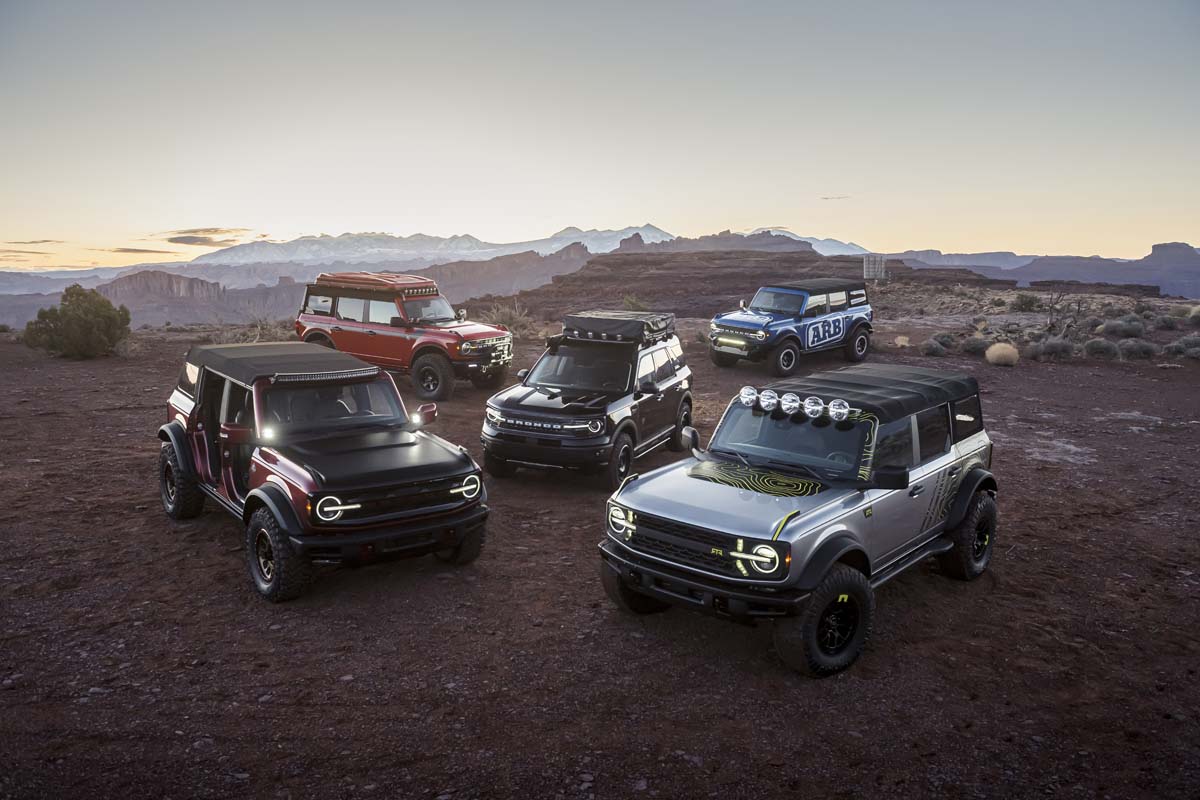 While Jeep has a long association with the event, Ford are relative newcomers and used this year’s Safari to present customised versions of their all-new Bronco. 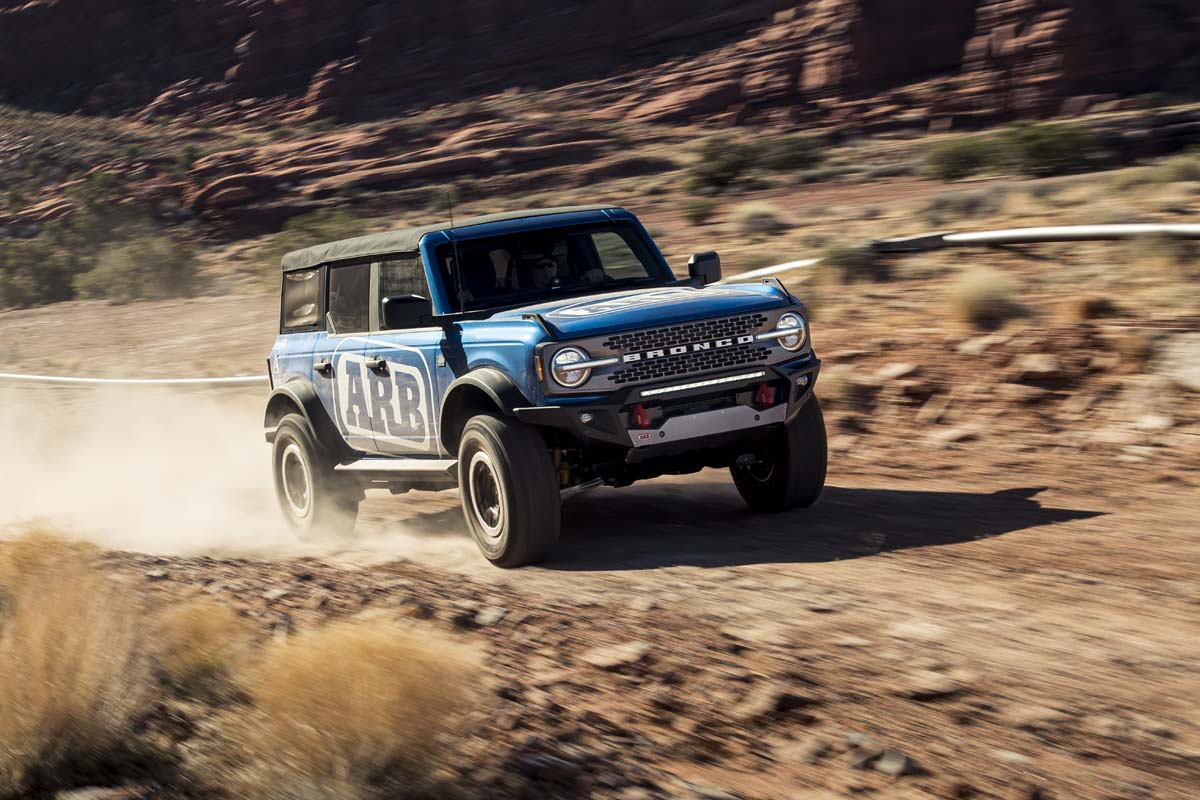 ARB have already produced a range of parts specifically for the Bronco two-door and four-door, with many of these fitted to the Bronco Badlands four-door pictured. These include airbag-compliant front and rear bumpers with a lightbar set into the front and tow hooks front and rear, as well as heavy duty ARB rock sliders and a heavy-duty ARB rear diff cover. 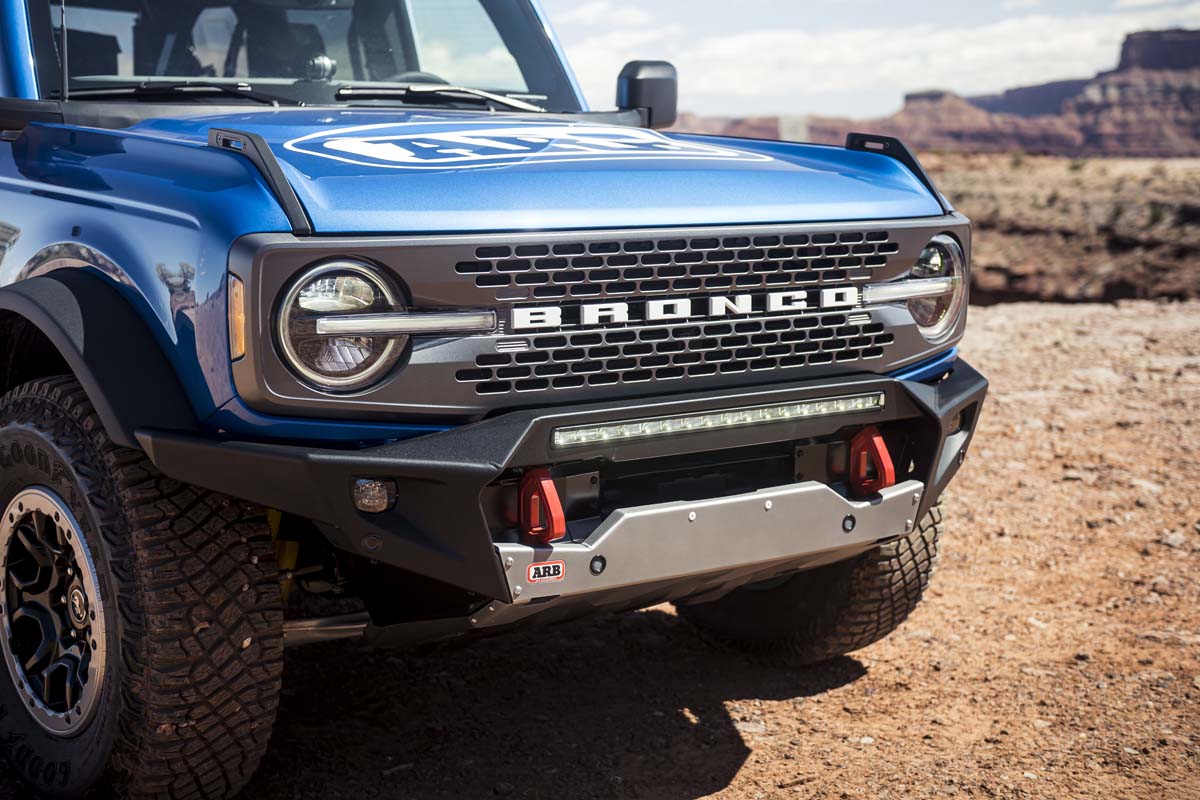 An ARB twin compressor is fitted under the bonnet (with monitoring via a smartphone app), while in the rear, the comprehensive fitout of this vehicle includes ARB recovery gear in the rear drawer storage system, with a slide-out ARB Zero refrigerator/freezer mounted on top. 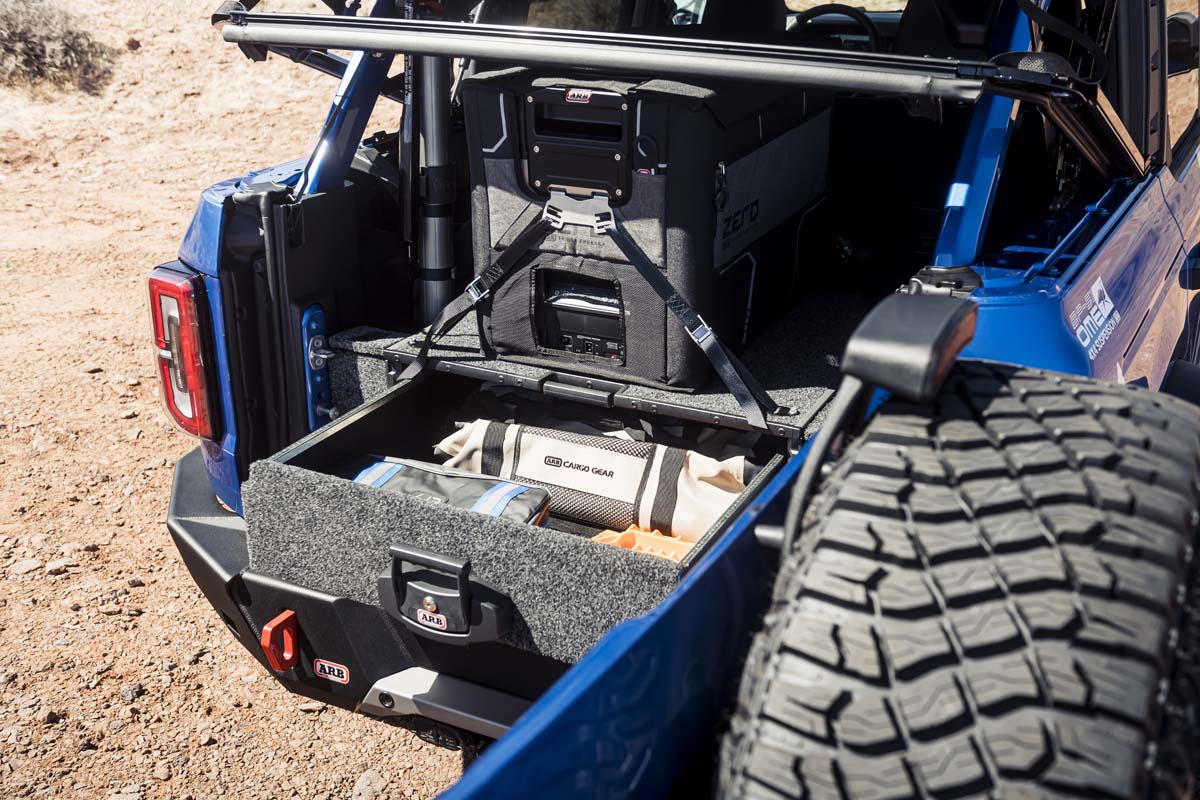 Aside from the branding for ARB and supporting companies (like OME and Linx) on the flanks, the Badlands was stock in all other respects externally, so those beadlock wheel, off-road tyres and high-clearance flares are either standard Ford parts or factory options.

Pettis adds that the Bronco Badlands unveiled at Utah represents a practical yet capable vehicle that improves performance and enhances comfort off-road. 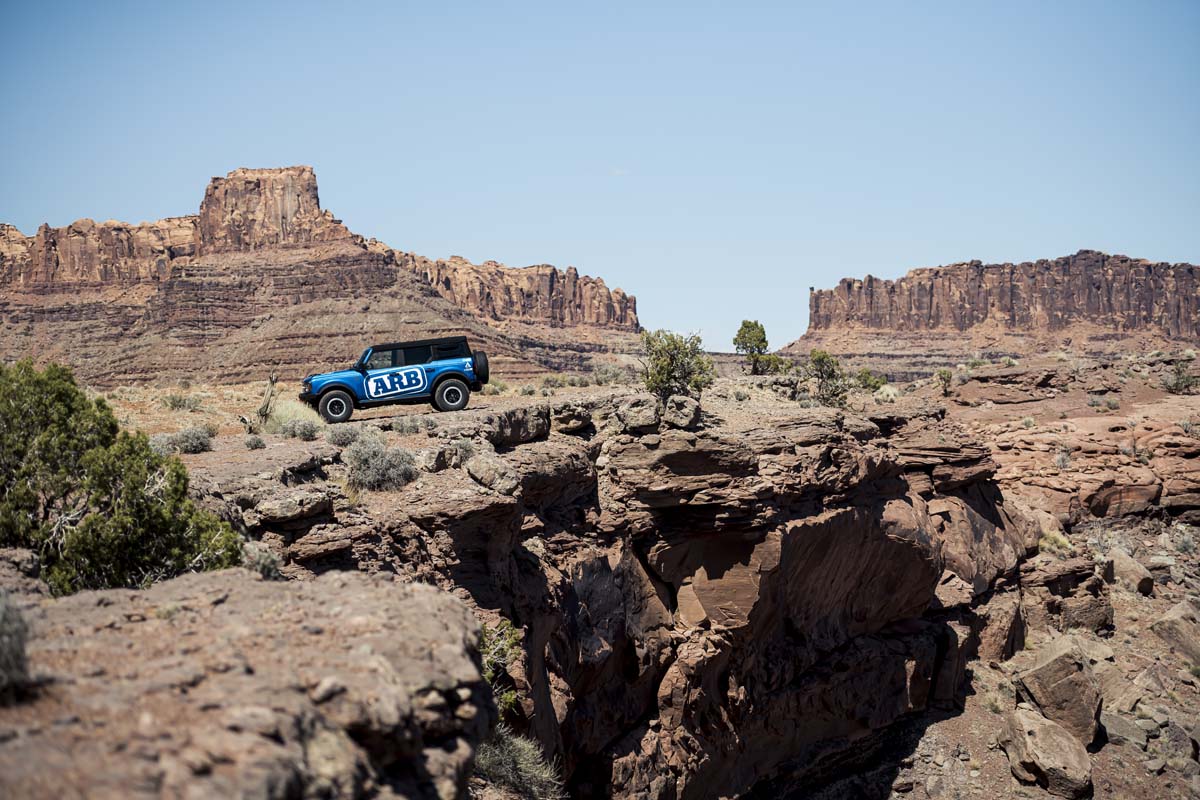 The new Bronco and related Bronco Sport will not be coming to Australia as a factory product, apparently due to Ford’s number crunchers predicting that sales in RHD markets would not be enough to cover the cost of engineering a right-hand drive version.

However, there is hope for Australian Bronco aficionados, with Crossover Car Conversions in Melbourne announcing earlier this year they were taking expressions of interest from local buyers for RHD versions.

With over 30 years’ experience in RHD conversions on all types of American LHD vehicles, Crossover Car Conversions have the ability produce a factory-look and factory-quality RHD Bronco.

Local demand will determine if and when an RHD Bronco will be available through Crossover Car Conversions.