Combining Italian craftsmanship with raw American muscle, the Aznom Palladium is a four-wheel drive like no other.

It may be one of the most “distinctive” SUVs in recent memory, but look beyond its polarising appearance and you’ll find the Aznom Palladium is also one of the most interesting. 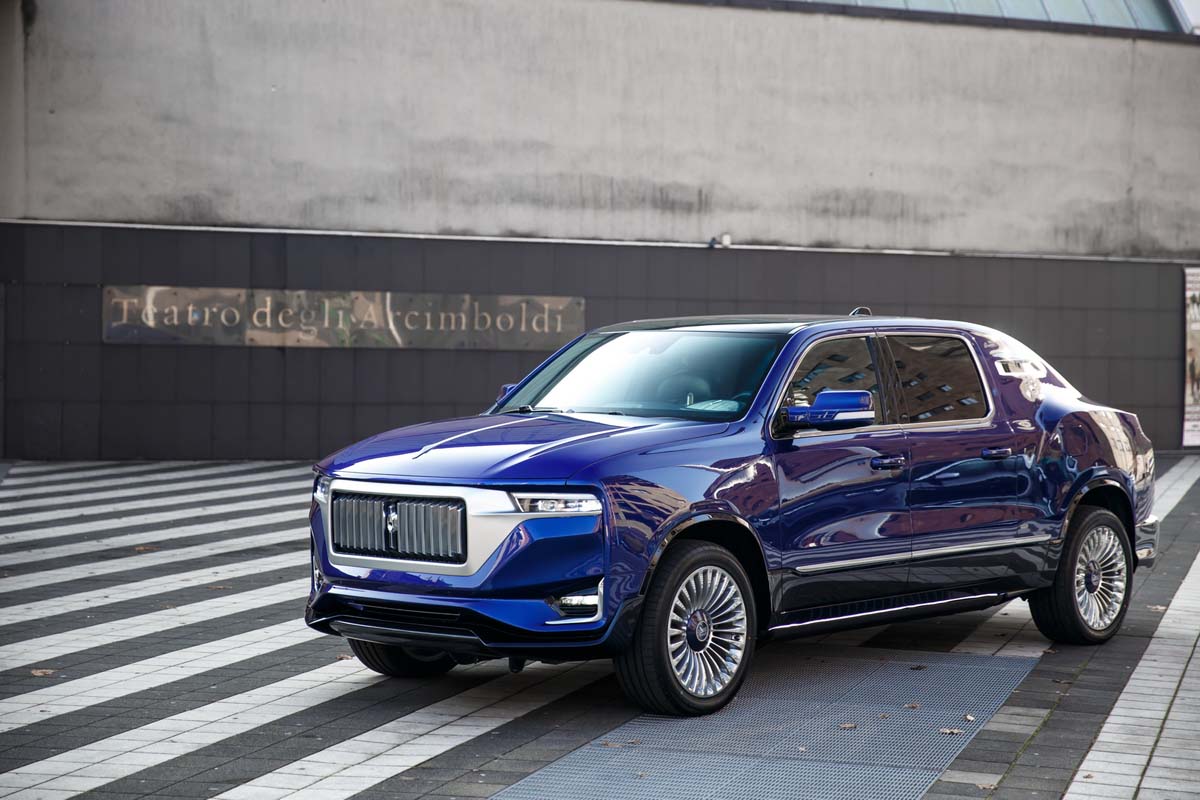 A four-seat luxury SUV/limousine/pickup hybrid, the Palladium is equipped and finished in the tradition of European coachbuilt cars from the 1930s, but with new millennium, tech, safety and convenience features.

Aznom Automotive, the creators of the Palladium, call it a “hyper-limousine” as it combines ultimate luxury with high performance and four-wheel drive ability. And while the Palladium is designed and built in Italy, there’s a fair bit of America under its oversized skin. 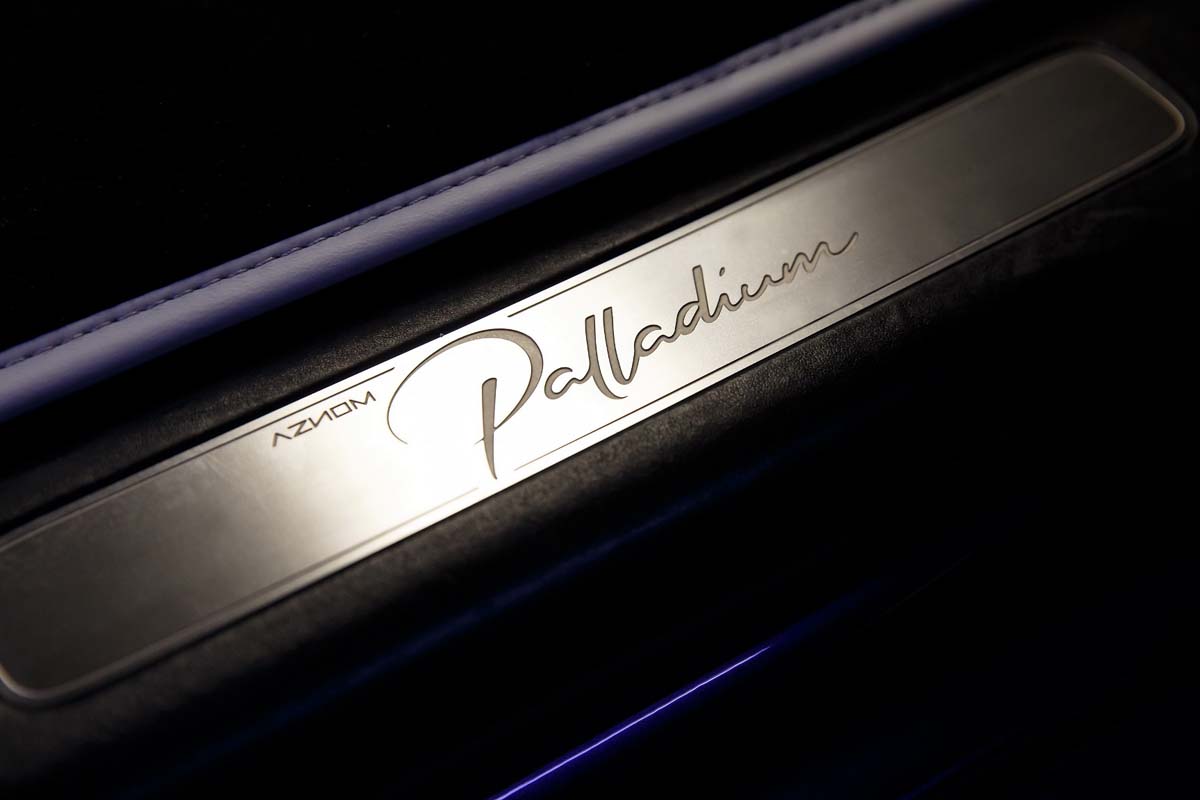 If you’ve never heard of them, Aznom Automotive is company based in Monza, Italy, that specialises in vehicle customisation and bespoke builds. However, when it was founded by Massimo Meregalli in 2007, Aznom’s ambitions were a little more modest.

Meregalli describes the roots of Aznom as a “graphics support company” (whatever that means) for other businesses under the ‘Gruppo Meregalli’ banner that has its origins in the wine industry. While he was always passionate about vehicles and speed, Meregalli didn’t start to focus Aznom’s attentions on cars and car customisation until Matteo Bertanelli, an equally passionate revhead, joined the company.

From their Monza base (‘Aznom’ is ‘Monza’ backwards, if you hadn’t already worked that out), Meregalli and Bertanelli began with custom interior fitouts for small cars like Minis and Fiat 500s, but Meregalli’s interest was in larger cars and SUVs, so Land Rover Defenders, Discoverys and Range Rovers got the Aznom treatment, too.

“I’ve always been passionate about large automobiles, like huge American sedans from the thirties to the seventies,” explained Meregalli. “I liked the super large hoods and the imposing stance of those cars. I thought about creating something similar for a long time and I even considered a ‘resto-mod’ operation on a vintage Rolls-Royce.”

To cater for the demands of the growing Aznom Automotive empire, complementary ‘Monza Garage’ and ‘Monzatech’ businesses were added in 2014 and 2016, respectively.

Early Aznom creations were subtle (if you can call a Range Rover fitted out with a series of solar-powered fridges subtle), but a hint of what was to come in the Palladium was first seen in the ‘Atulux’ from 2018.

While most who saw the Atulux would have called it an SUV, Aznom described it as a luxury sedan. The Atulux was actually a RAM 1500 crew cab pickup forward of the C-pillar, but with a bespoke, enclosed extension of the cabin behind that allowed a much larger rear seat space.

Trimmed and equipped like a luxury limousine inside, including what Aznom called ‘business class’ reclining rear seats, the Atulux still looked like a pickup truck outside, albeit a slightly weird one.

Meregalli said he selected a RAM as the base for the Atulux because of its expansive interior space, but also for its integral four-wheel drive system. When asked why a luxury sedan needs off-road capability, Meregalli cited his vintner roots, needing four-wheel drive to visit rural vineyards, as well as the countless times he’d seen conventional sedans stuck in the snow en route to alpine ski resorts.

“The car that I had in mind had to be beautiful, luxurious, comfortable … but also unstoppable!”

According to Meregalli, the Atulux sold soon after its creation (despite a price tag in excess of US$300,000), but before that one-off was even finished, an even more bespoke vehicle had been committed to.

“In 2008, Cadillac unveiled the new presidential limousine for President Barack Obama. Starting from a mega-SUV, Cadillac had built a luxury sedan - big and imposing but with the proportions of a classic sedan,” Meregalli recalled. 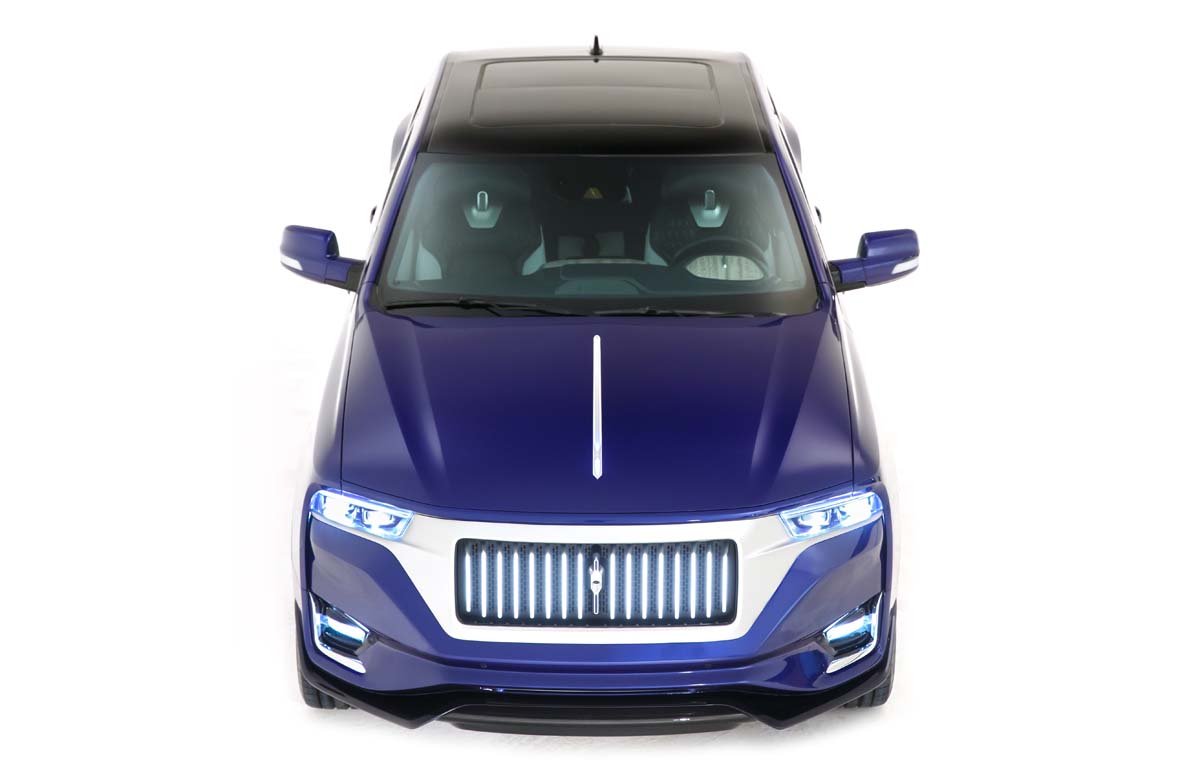 “That particular Cadillac gave the final push to an idea I had since before the Atulux, of a car completely manufactured by us both outside and inside.”

While Aznom had experience styling and creating interiors, a bespoke exterior was outside of their skillset, so an important step in the progression from Atulux to Palladium came with the involvement of Alessandro Camorali of Studio CAMAL. 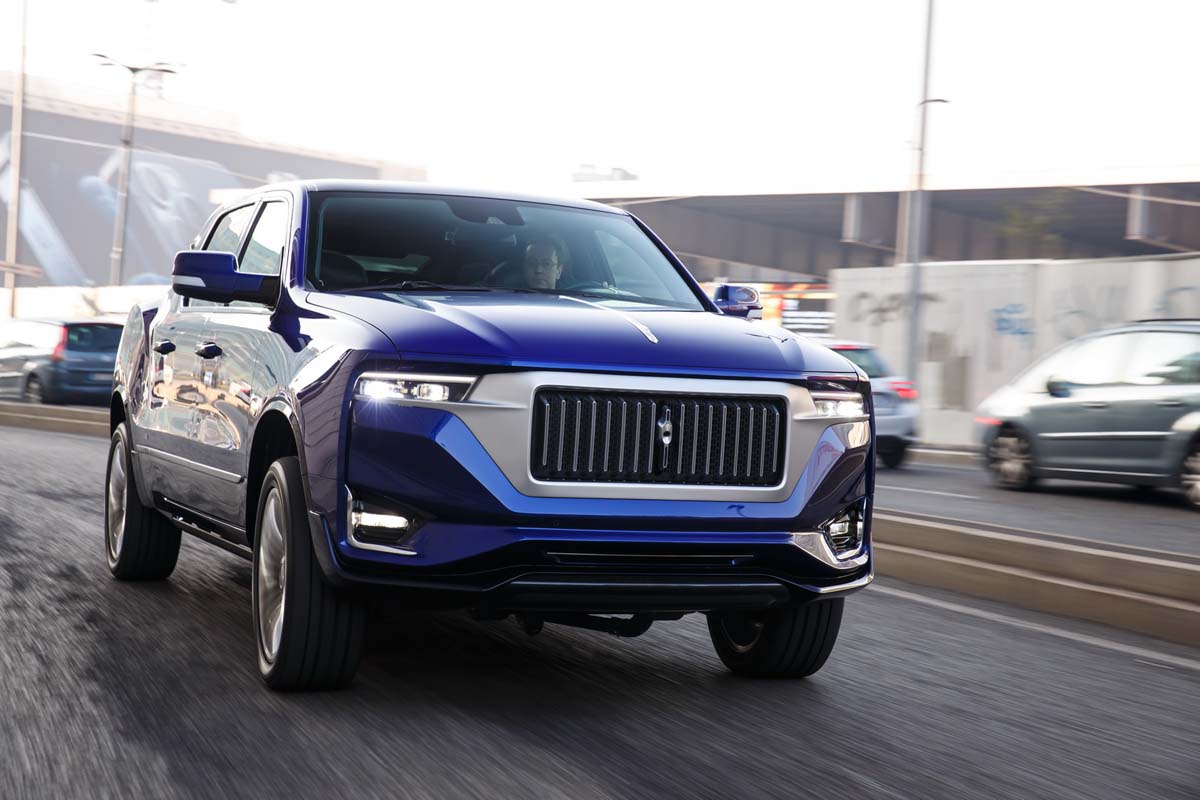 Based in Turin, Studio CAMAL had been in existence for less than a decade before its collaboration with Aznom, but founder Camorali had plenty of experience in the industry, working for established Italian automotive design studios like Pininfarina and Bertone (where he was involved with the BMW ‘Mille Miglia’ concept), as well as consulting directly for Ferrari on several production models. 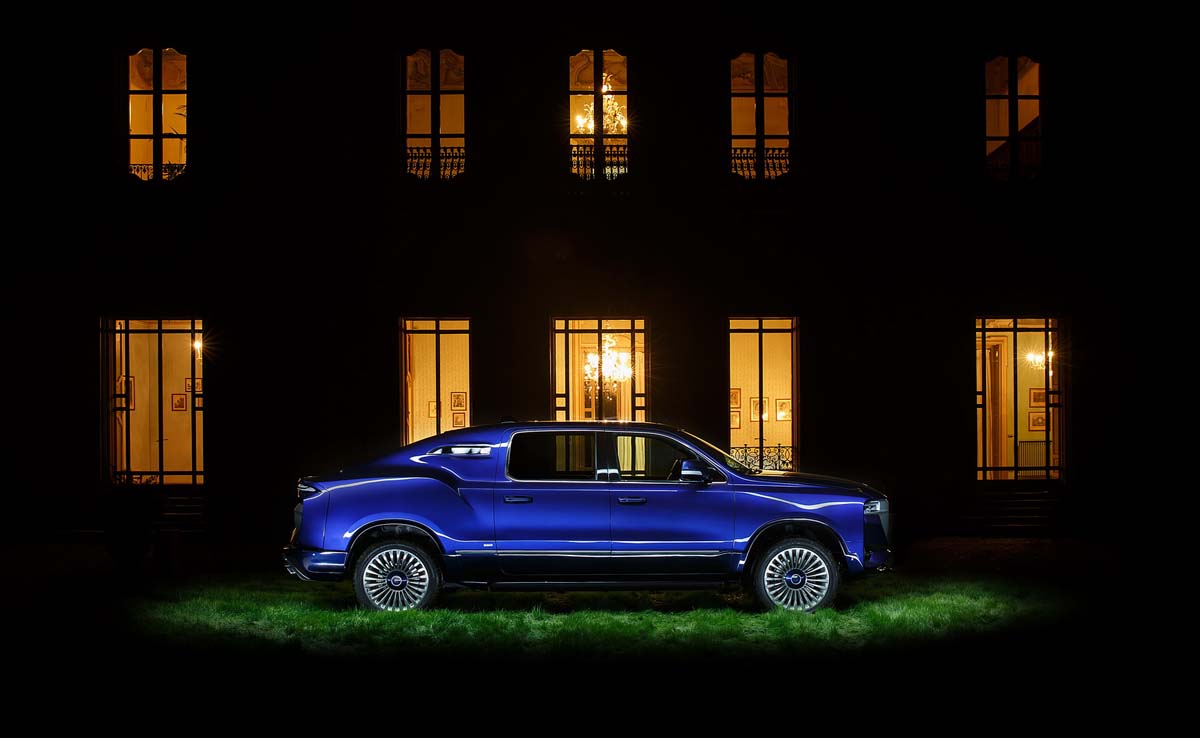 “In time, we started working closer together and, by the end of 2017, the final idea started to take shape. Finally, in 2018, with the launch of a perfect vehicle for us to use as ‘foundation’ (the Atulux), we made the final decision to start the (Palladium) project.”

With the Atulux as “proof of concept,” an enthusiastic team at Aznom and an automotive stylist on board, everything was in place to make the next stage in Meregalli’s bespoke luxury sedan vision a reality.

For the base for what would become the Palladium, a RAM 1500 was chosen again, which dictated the overall proportions that Studio CAMAL had to work with. That meant a 3,672mm wheelbase (as per a RAM 1500 Laramie) and approximate dimensions of around 5.9m x 2.5m x 1.9m (LxWxH).

As a statement of luxury, CAMAL went for a bold grille, curved hip over the rear wheels, opera windows and a fastback roof treatment, while what Aznom call the vehicle’s “aesthetic expression of its mechanical strength” was presented with large, flat surfaces everywhere else.

There’s a fair bit of hyperbole in Aznom’s description of the Pallladium’s exterior (like the front and rear treatments being “rough gems inside a continuous and harmonious shape”), but the overall boldness of the vehicle’s appearance can’t be denied. 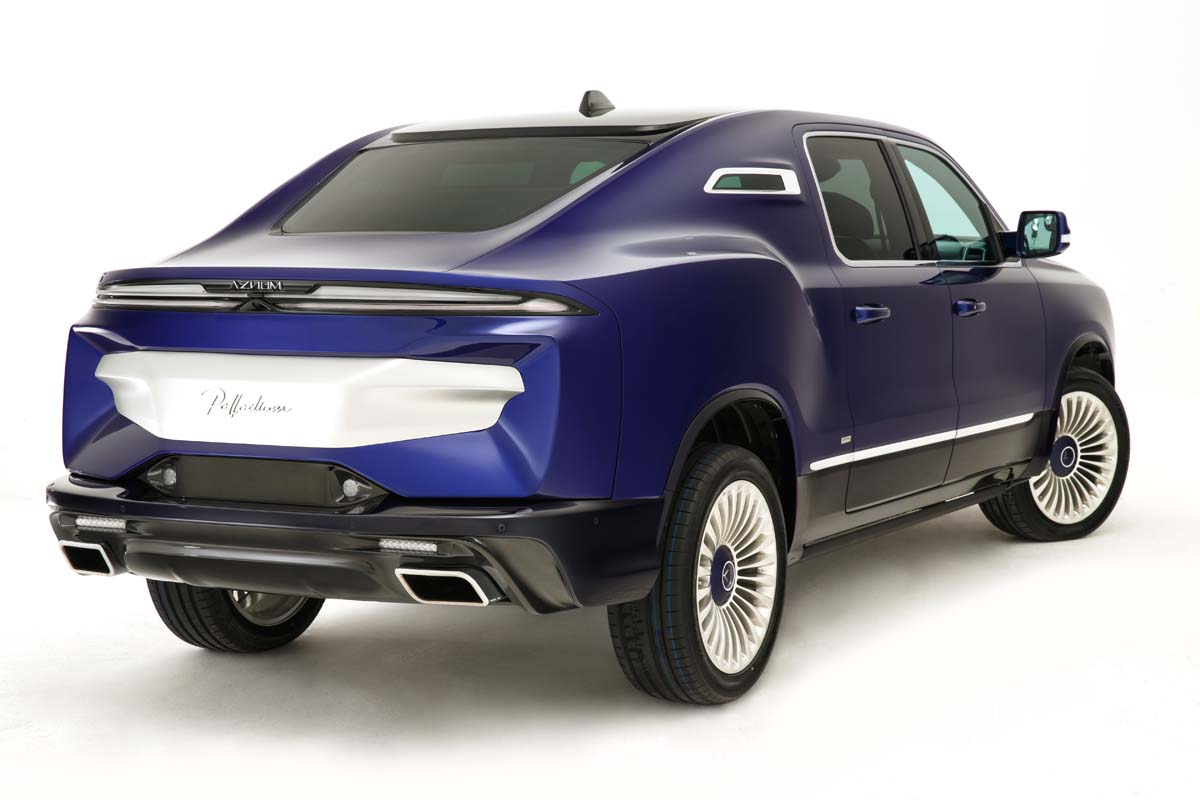 The bluff grille with vertical bars has elements of Rolls-Royce, enhanced by a large chrome surround, but other front-end ornamentation is minimal. At the rear, the sloping roofline dominates, with slim tail lights and a large satin-finish fascia panel that echoes the front end treatment and also carries the Palladium name.

Quirky touches include LED illumination on the grille bars and tip of the chrome bonnet spear, but one of the Palladium’s more interesting features is at the rear. Instead of a conventional hinged boot, hatch or tailgate opening, access to the rear storage is via a sliding drawer that includes the entire tail light cluster and holds 621 litres. 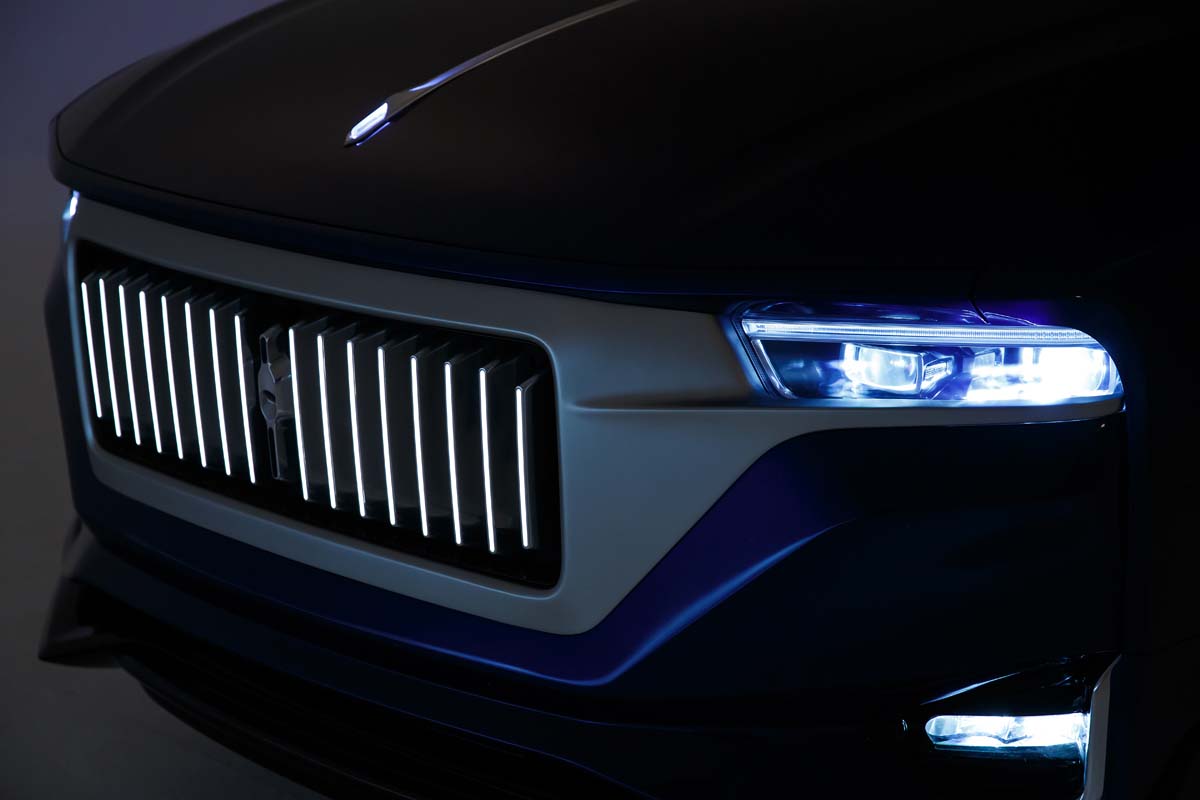 While the Palladium’s front and rear sections are entirely bespoke, the doors and glass area are more recognisably RAM. Contrasting wheelarch trim and lower body cladding is a typical SUV feature, but chrome strips add the requisite luxury touch.

The wheels are Aznom-designed exclusives of 22-inch size, matched to Yokohama Advan Sport performance street tyres on the vehicle featured. 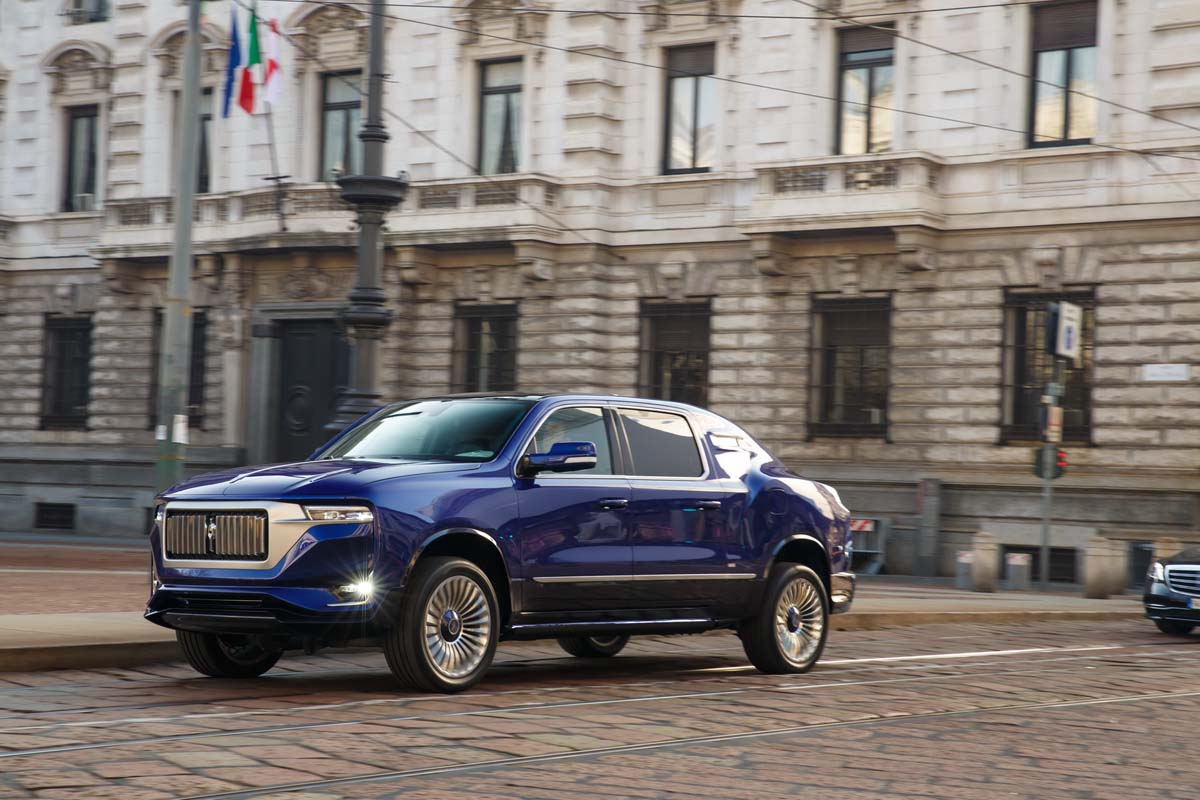 Surprisingly, most of the bespoke body is in steel, with only a few sections in aluminium. To ensure torsional stiffness following the removal of the pickup’s tub, a bespoke steel cage is added to the rear. Even with a roof and bonnet in carbon fibre, the Palladium’s kerb weight is listed at 2,650kg, which sounds hefty but is only slightly above the 2,620kg for a standard RAM 1500 Crew Cab pickup.

Reflecting the intent of the Palladium as a car to be driven in, rather than drive, much of the interior focus is on the rear seats.

Sitting high and deep in the interior, the two large rear seats have a reclining function and feature distinctive headrests, while complementary cushions also serve as footrests.

On either side of the rear seat are slide-out cabinets with a whiskey decanter, glasses and cigar holders, but if your preference is for bubbly, there’s a chiller for a pair of champagne bottles in the centre console extension. 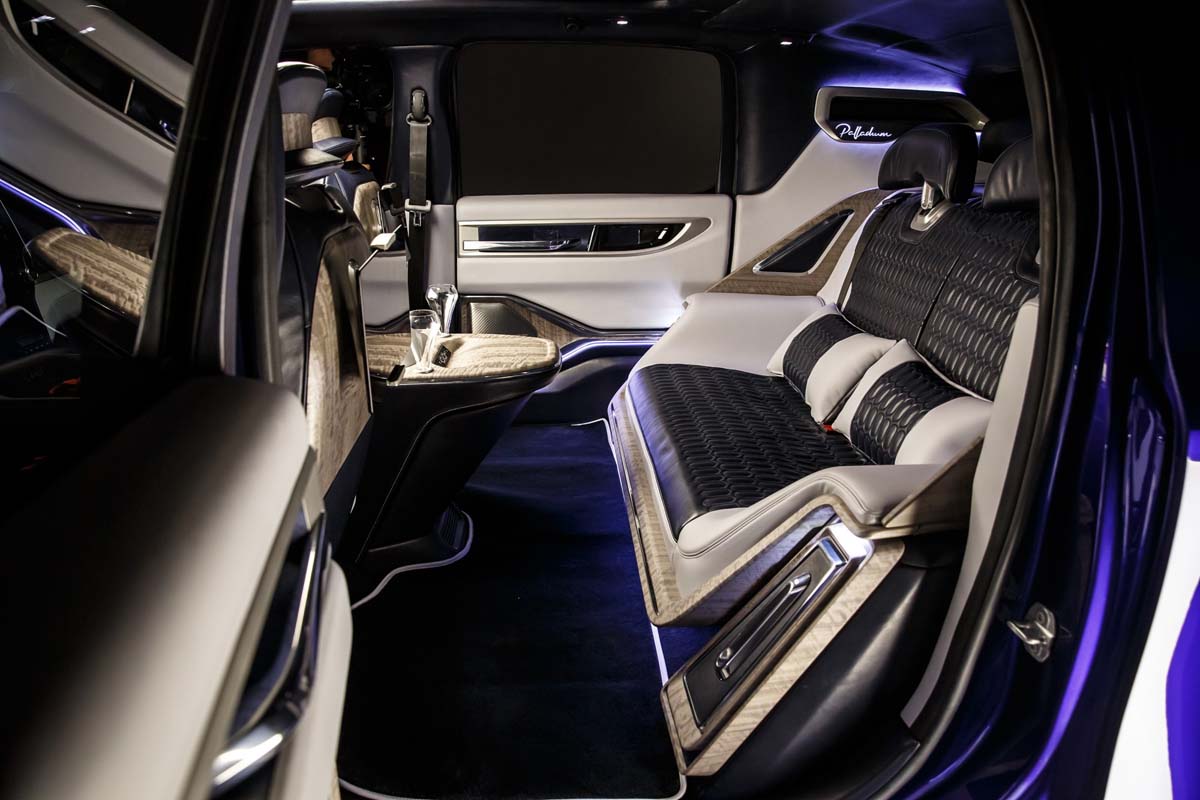 Handcrafted timber and aluminium frame the seats and storage compartments, while the leather trim for the seats comes from century-old Italian leather company Foglizzo. The white and blue combination on the rear seats, including the distinctive pill-patterned centre sections, has been applied to the front seats, too, with further leather trim on the steering wheel, dashtop and doorcards. In a suitably indulgent touch, the entire headliner is leather, too.

Touchscreens in the doors allow passengers to individually adjust the climate control air conditioning, lighting, seat position and storage drawers in their immediate area, along with the usual window and door locking. Passengers can even set the fridge temperature! If required, the driver can override all these via their own control panel.

The rear seat layout has been designed to incorporate speakers for a premium Harman Kardon sound system, while a pair of Microsoft Surface X PRO tablets have been added for the rear seat occupants, too.

The finishing touch in the rear is a Palladium clock, featuring gold and palladium metal detailing, that’s fitted to the centre console extension, but removable for use at home.

Move to the front seats and the Palladium’s RAM origins become apparent, using the pickup’s 12.0-inch central touchscreen and related switchgear, steering wheel, instrumentation, air vents, seats and other features, but several of these elements have been modified.

There’s just as much leather trim in the front seat area, but less timber, and what is there has been stained blue.

A set of fitted leather luggage from Foglizzo for the boot and a Francesco Maglia umbrella completes the interior fitout.

Aznom says that the interior on the Palladium presented here is just their interpretation. Palladium buyers are encouraged to select their own colours and finishes to suit their tastes.

Under the bonnet, the RAM 1500’s V8 engine has been retained for the Palladium, but it hasn’t been left alone, with Monza Garage subjecting the 5.7-litre Hemi to major modifications.

Combined, the changes have resulted in power being increased to a claimed 522kW, with torque up to 950Nm. That’s a whopping increase on the Hemi V8’s factory output of 291kW and 556Nm in the latest RAM 1500.

Aznom also claim a 0-100km/h time of 4.5 seconds from this upgraded package, with top speed limited to 210km/h. 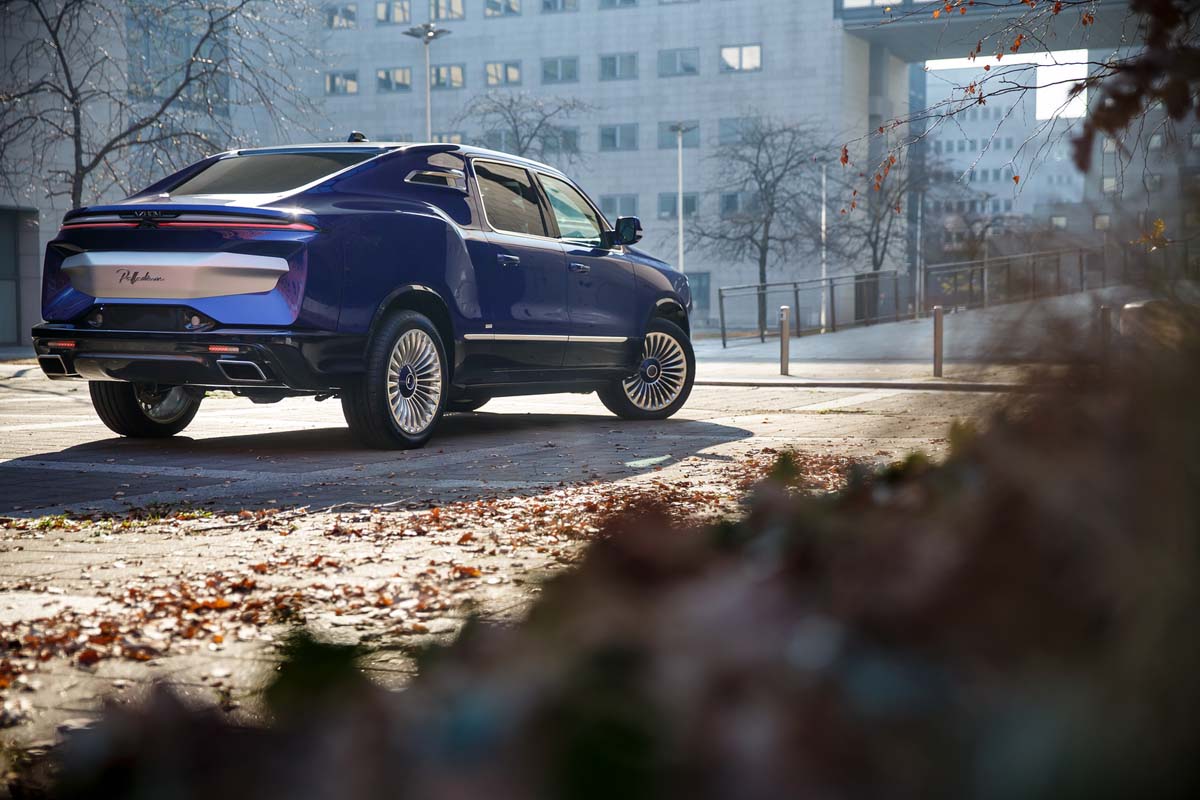 The engine’s ‘Multi-Displacement System’ cylinder deactivation technology is retained and the eTorque mild hybrid system recently introduced by RAM can be fitted to the Palladium at customer request.

Helping to keep the twin-turbo engine cool is an electronic water pump, developed by Monzatech and exclusive to the Palladium, that manages engine and intercooler temperatures with split-second adjustments.

Behind the engine, the current RAM 1500’s Torqueflite eight-speed automatic transmission and on-demand four-wheel drive system is carried over mostly unchanged and includes an electronic locking rear diff. However, any off-road adventures would require the 22-inch alloys and Advan Sport tyres to be swapped out for something more suitable!

Like the engine, the brakes have been given a major makeover, with the factory 336mm front and 352mm rear discs replaced with 408mm front and 380mm rear ventilated discs, matched to Brembo GT calipers – six-piston on the front and four-piston on the rear. 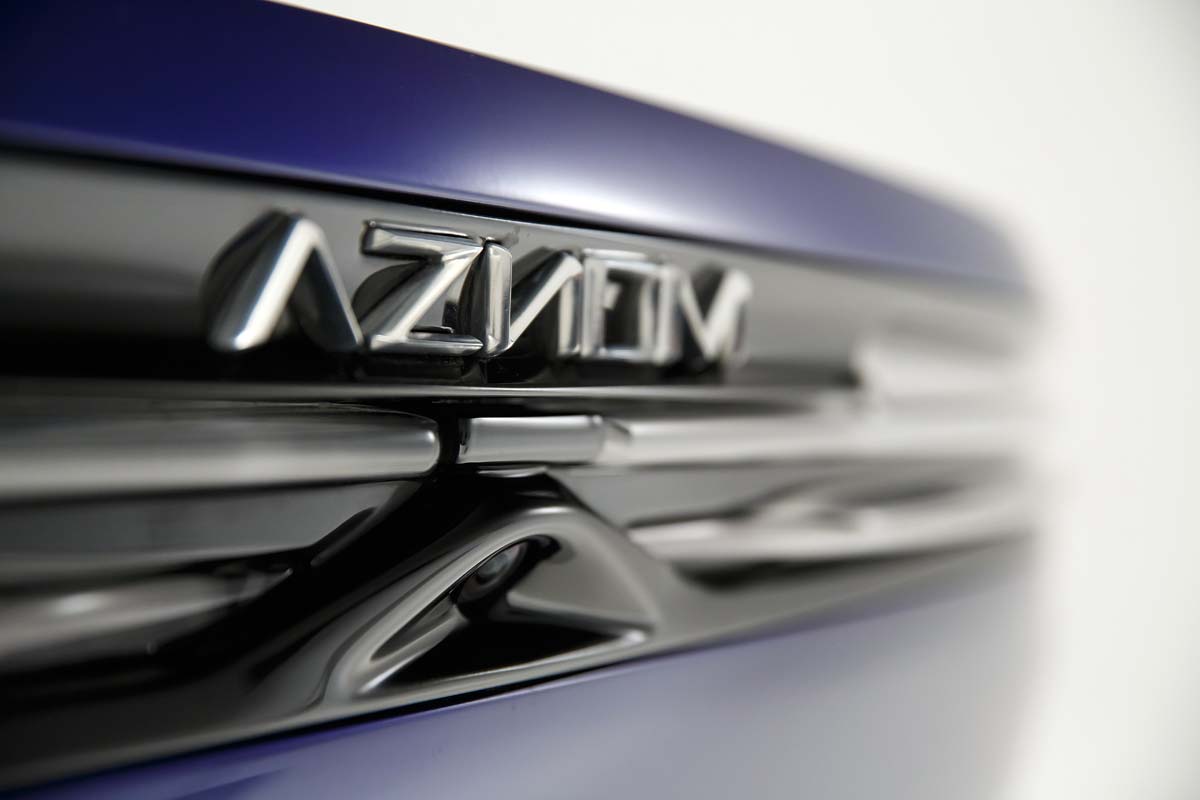 Suspension is carryover from the RAM’s independent front and rear set-up. An A-arm front, five-link rear, stabiliser bars at each end and Frequency Response Damping shocks are all RAM factory-spec stuff, but Aznom make no mention of the Active-Level Four-Corner Air Suspension that’s available on the latest DT-spec RAM 1500, so presumably that’s not included.

Electric power steering and the RAM’s standard safety tech, including six airbags, have also carried over to the Palladium unchanged.

When Aznom Automotive announced and released the Palladium last November, they declared they’d build just ten of them, with each one custom finished to the owner’s specification. Since then, it’s all gone a bit quiet and there’s no word on whether the other nine (after the launch vehicle pictured) have been, or indeed will be, built.

As far as price goes, there’s been no word on that, either, but given the Atulux was over US$300,000, don’t expect much – if any - change out of US$1million for the Palladium.