The fastest and most powerful RAM truck ever, the 1500 TRX may be on its way to Australia.

When the 2021 RAM 1500 TRX was announced last year, it didn’t just state its credentials, it shouted them – the quickest, fastest and most powerful mass-produced truck in the world. 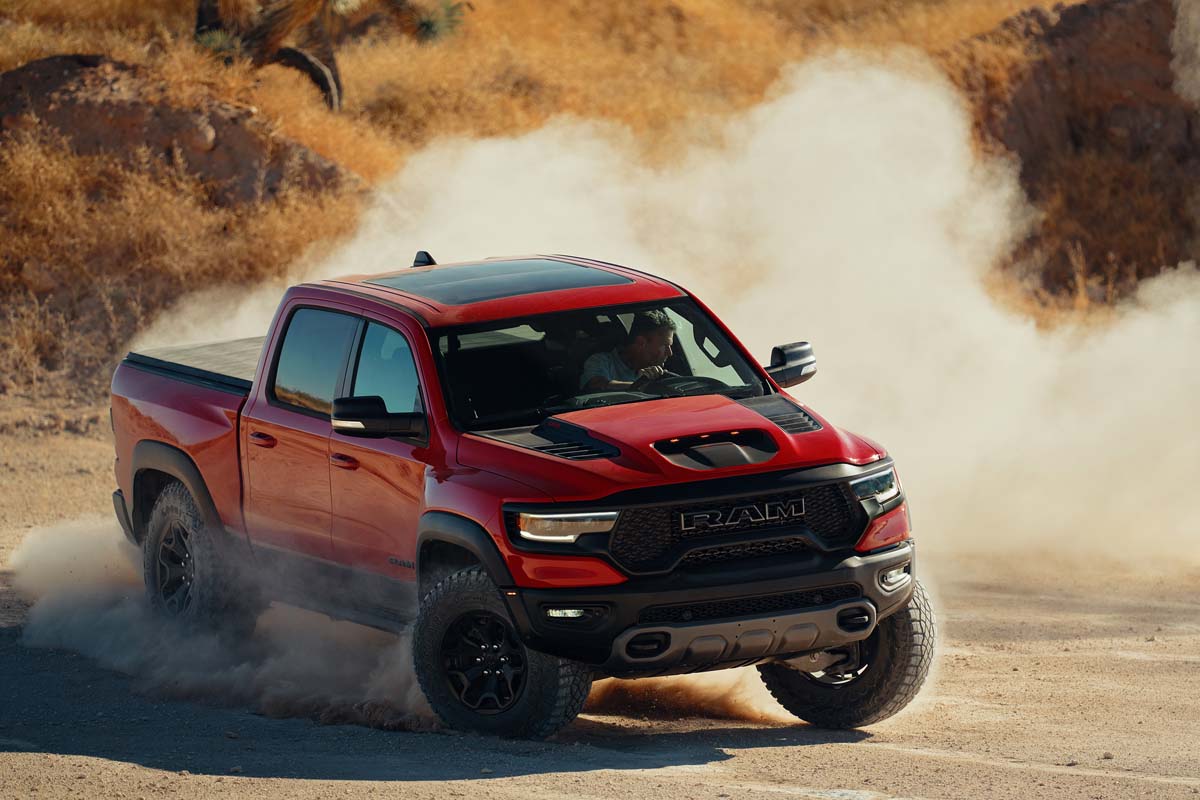 A rival to the Ford F-150 Raptor in the USA, some of the phrasing around the 1500 TRX, like being “the apex predator of the truck world,” sounds ostentatious, but there is a lot of engineering and development work behind this truck to back up RAM’s boasts.

“The all-new 2021 Ram TRX sets the benchmark for extreme performance pickup trucks and solidifies Ram Truck’s position as the off-road truck leader,” said Mike Koval, Head of Ram Brand, when the 1500 TRX was announced in August, 2020.

“Ram has a strong history of high-performance trucks and TRX adds to that while expanding the light-duty lineup with the segment’s best combination of performance, capability, luxury and technology.” 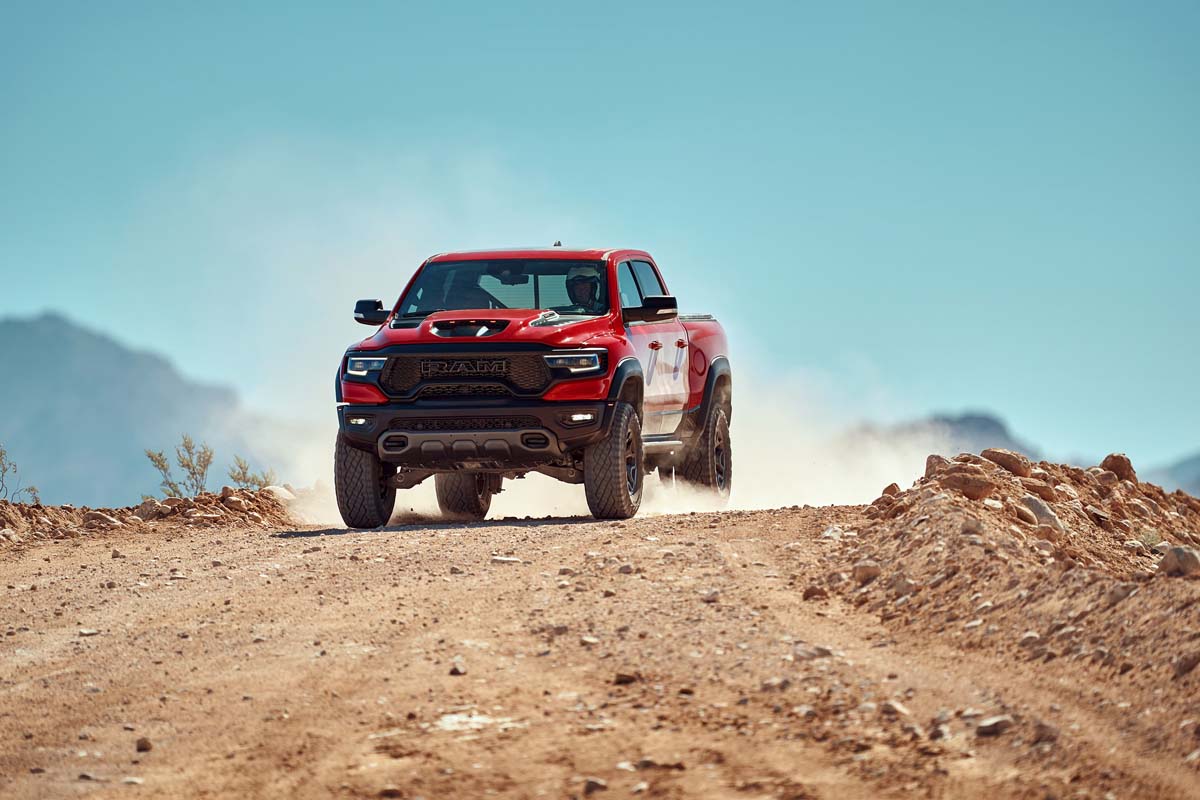 RAM Trucks Australia were less shouty when they announced they were taking expressions of interest from local customers for the 1500 TRX back in February, but they still described the performance pickup as the “leader of the pack”.

RAM Trucks Australia has proven to be successful beyond all expectations, despite pricing that starts in the $80,000 range and reaches up to almost $140,000. If it comes here, the 1500 TRX could cost close to $200,000. That’s a lot, but in the case of this vehicle, you get a lot of truck for your money. 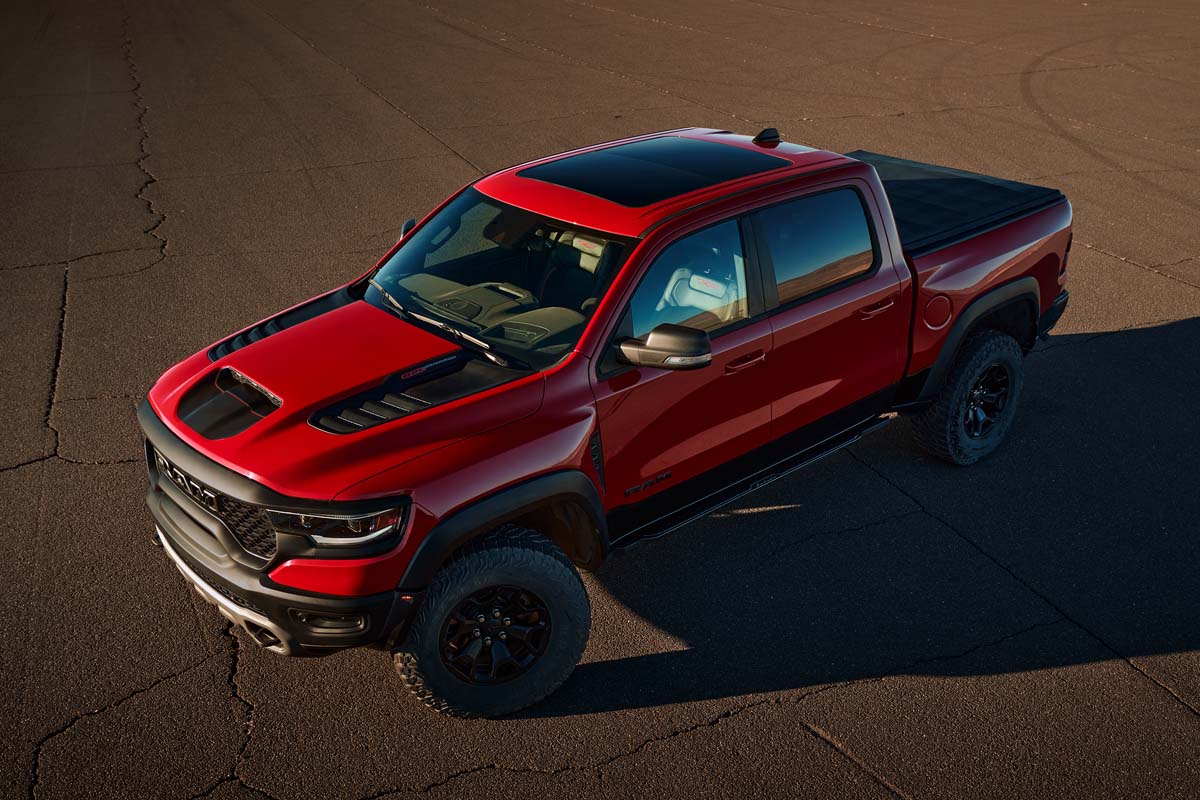 Like the rest of the RAM pickup range currently available in Australia, the 1500 TRX is powered by the famous HEMI V8 engine, but in this application, It’s the 6.2 litre version (instead of 5.7 litres) and a supercharger is added, along with other tweaks.

RAM envisage 1500 TRX owners taking their vehicles into extreme terrain off-road and such sandy, dusty or muddy conditions aren’t conducive to a supercharged engine, so a dual-path induction system was developed to ensure a steady supply of clean air regardless of inbound dirt, sand or debris.

The two paths – one from a large functional scoop on the bonnet and the other from the upper section of the grille - route incoming air to a jumbo-sized 29-litre airbox that filters out water, dirt, sand and other debris before it can be sucked into the engine. A one-way drain at the bottom of the airbox expels water, while twin heavy duty filters at the top claim to provide four times the dust-trapping ability of the 1500 TRX’s rivals.

The bonnet scoop and its seals are also designed to prevent engine-heated air from entering the system and reducing the supercharger’s efficiency.

The 6.2 supercharged HEMI is matched to a TorqueFlite 8HP95 eight-speed automatic transmission that, like the engine, is a proven unit in high-performance applications. 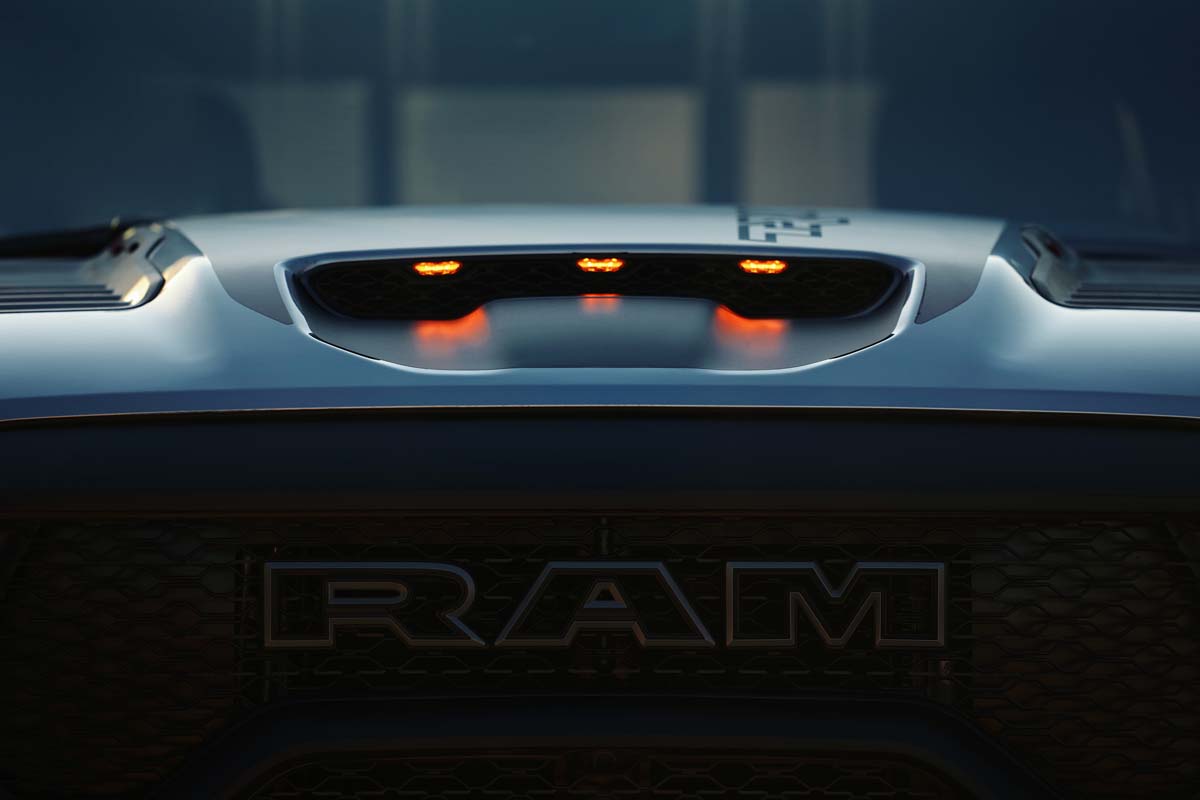 As applied to the 1500 TRX, the TorqueFlite monitors inputs, such as engine torque gradients, throttle kick-down, longitudinal and lateral acceleration, detection of friction and road grade, responding with precise and quick gear changes. To give a bit of control back to the driver, paddle shifters and a centre console shifter are fitted – both of which are RAM firsts.

Unlike other RAM pickups, the 1500 TRX features full-time four-wheel drive instead of a part-time system. Based around a new BorgWarner 48-13 transfer case with a 2.64:1 low range ratio, 4WD Auto, 4WD Low, Neutral and 4WD High can be selected.

To get the most out of this driveline package, there are eight driving modes, three of which are dedicated to off-road use.

For specific off-road applications, there are Mud/Sand, Rock and Baja modes.

To rein in the 1500 TRX’s 523kW of power, four-wheel disc brakes are standard, comprising 381mm rotors front and rear, with four-piston calipers up front and single-piston calipers at the back. RAM says this set-up is the largest in its class

Like the rest of the RAM pickup range, the 1500 TRX is a body-on-frame design, but the frame on this truck is new, designed specifically for performance applications.

The steel sections of the frame are thicker and optimally shaped to increase durability and stability. Side rails are fully-boxed, while the front rails use both high-strength steel and hydroformed sections to handle the engine weight and front suspension loads. 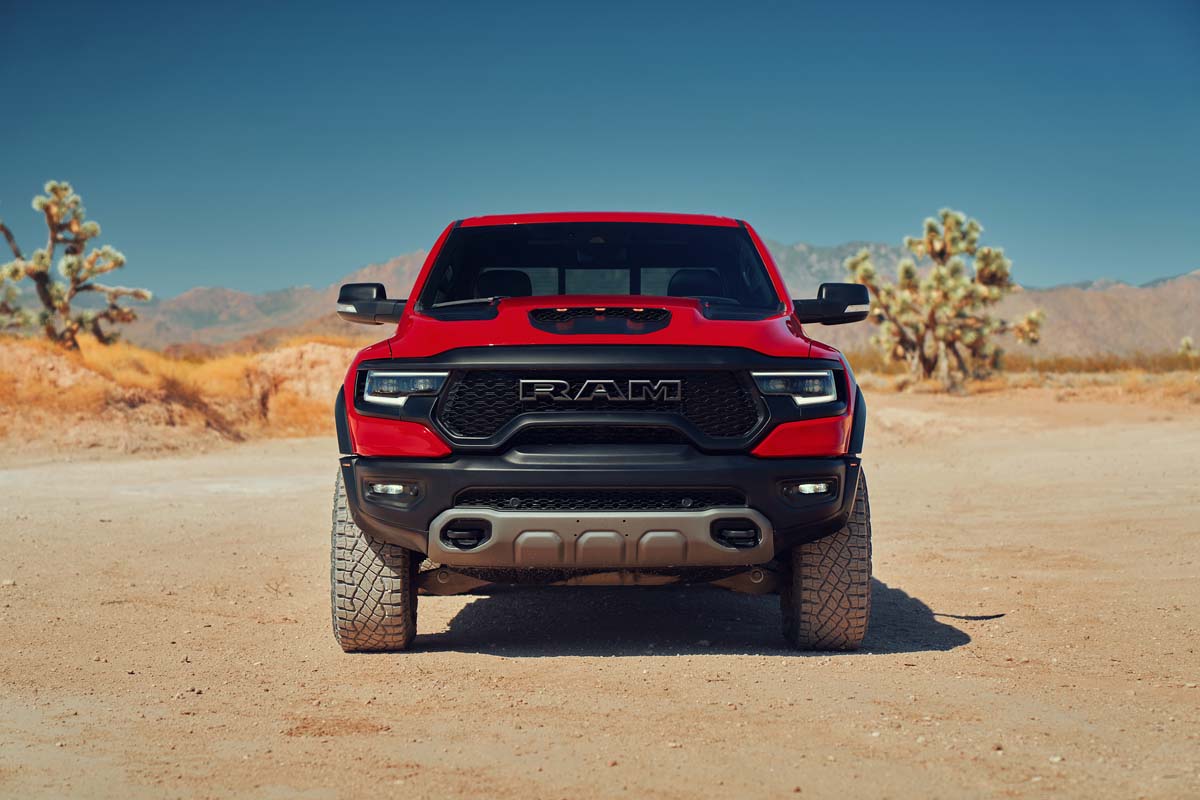 The rear suspension is new, too, using a five-link independent set-up on a Dana 60 axle instead of the usual live axle and leaf springs. While reducing payload capacity, this system is better suited to the performance applications this truck is intended for. The five-link is exclusive to the 1500 TRX and features 600mm rear springs - the largest fitted to a non-commercial vehicle. 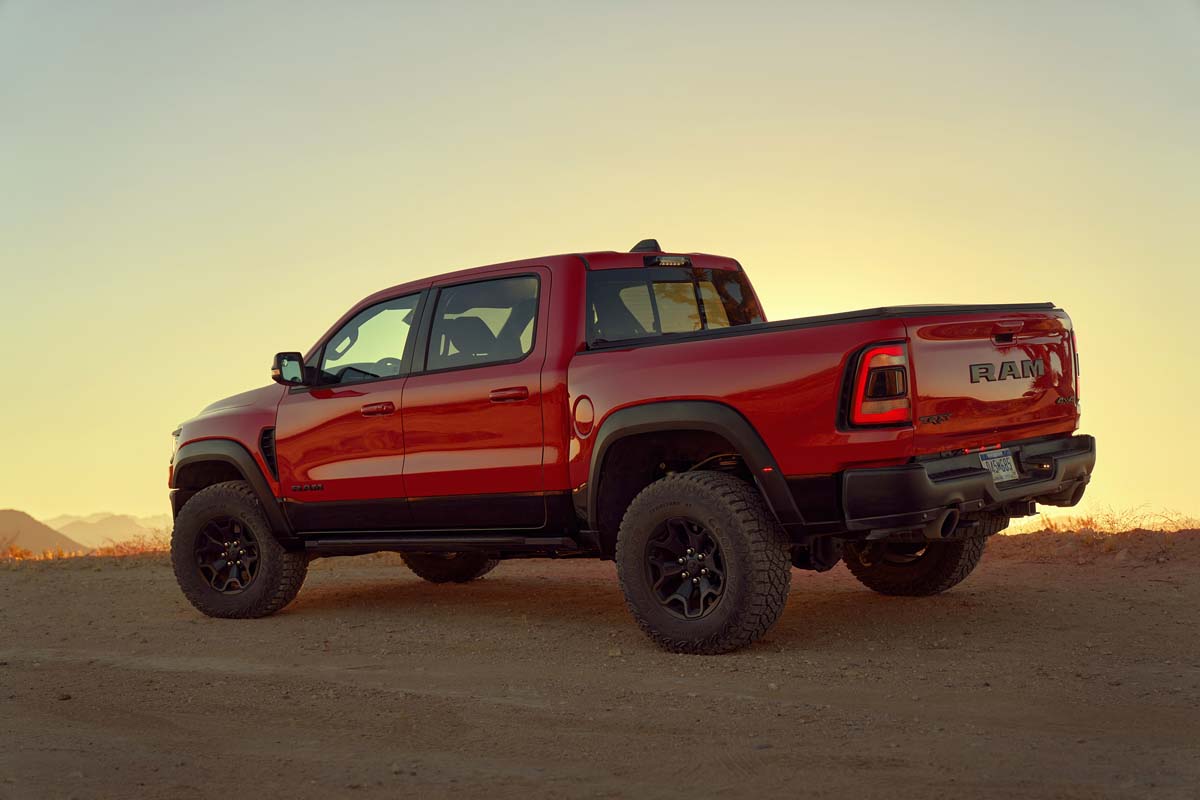 An approach angle of 30.2 degrees, breakover angle of 21.9 degrees and departure angle of 23.5 degrees are listed, with wading depth of 812mm.

Even amongst the RAM full-size pickup range, the 1500 TRX stands out. The styling is undeniably bold and brash, but when you’re packing a 523kW supercharged HEMI V8 under the bonnet, you’ve got a right to be cocky!

That extra width has seen LED clearance lights added to the outer edges of the front bumper, which are more for styling than practicality in this application. Same goes for the clearance lights within the large bonnet scoop, but they do look cool.

While that scoop sucks air in, large vents on the bonnet draw engine heat out, with smaller vents outboard of the LED headlights, matched to extraction vents on the trailing edge of the front guards, designed to reduce air pressure under the wheelarches.

Most of the front-end styling is bespoke to the 1500 TRX, including larger “flow-through” RAM letters on the grille, the grille itself, skidplate and bumper bar that features integral tow hooks.

In profile, the changes are less obvious, but there are wider panels at the rear to accommodate the increased track. The back end is mostly unaltered, but a large RAM tailgate badge features, along with a trio of clearance lights, mirroring those in bonnet scoop, plus dual 5-inch exhaust tips and tow hooks in the rear bumper.

To make the 1500 TRX a bit more “shouty,” bodyside and bonnet TRX graphics are optional. 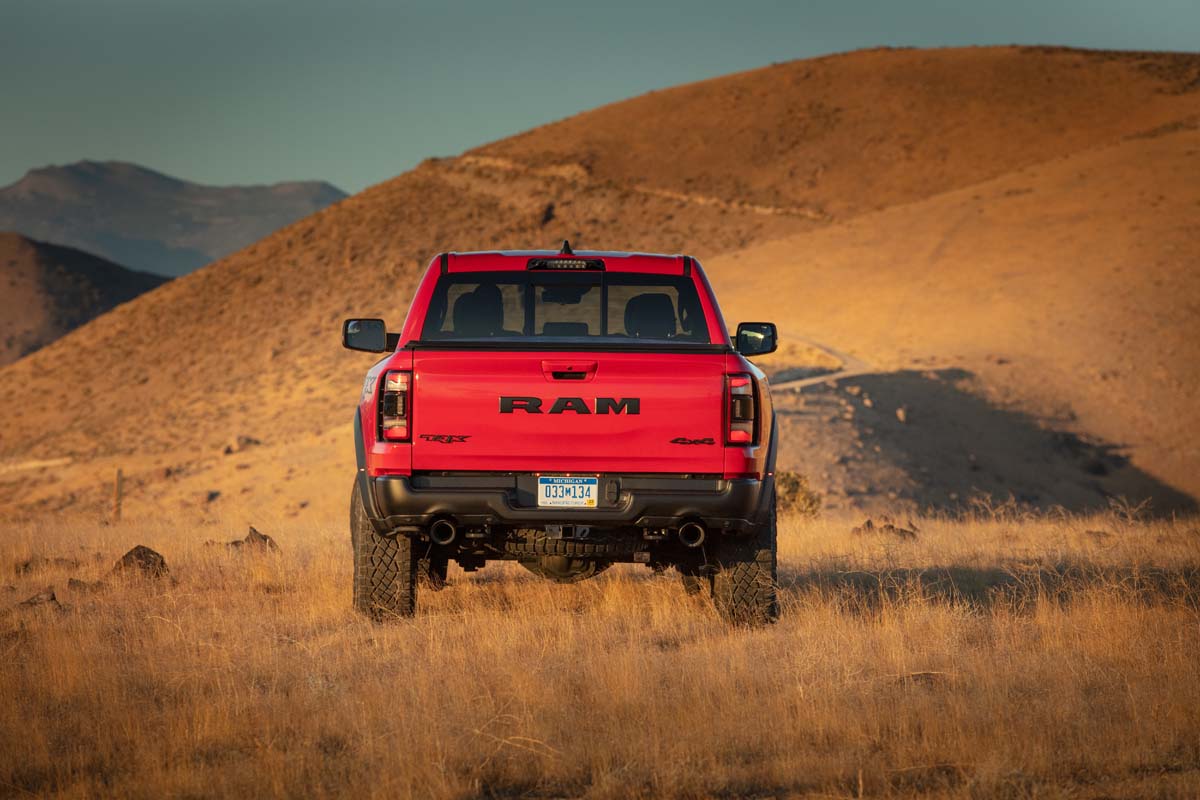 Inside, there’s more of a premium feel, but for a sporty look, red detailing and contrast stitching, along with carbon fibre accents, are all available.

Regardless of the combination chosen, some TRX-specific touches are added, like embroidered front seat headrests and a plaque on the centre console storage lid.

Front seats are new, with larger upper bolsters and MOLLE webbing on back. The steering wheel is also new; a flat-bottomed SRT (Chrysler’s performance brand) unit with enhanced grip.

The TRX’s launch control button is incorporated into the dash-mounted switch pad that also houses the high/low-range selector and drive mode controls.

As mentioned, paddle shifters and a centre console shifter make their RAM Truck debut on the 1500 TRX, with an optional head-up display being all-new, too. Accessible via the 12-inch Uconnect screen on the centre console, the HUD can display up to five different data fields at once, including turn-by-turn navigation.

The instrument display is a 7-inch TFT screen with TRX-specific colours and graphics that can be personalised, while a 900-watt Harman Kardon audio system with 19 speakers and a 10-inch subwoofer is optional.

On the 12-inch Uconnect screen, the ‘Performance Pages’ function is lifted from high-performance Dodge vehicles, showing real-time information, like timers (elapsed time or lap time), g-force, gauges and engine performance data. There are also ‘Off-Road Pages’ that show ride height, transfer case position, pitch and roll, and accessory gauges, with this information viewable through either the Uconnect screen or instrument screen.

While expressions of interest remain open on the RAM Trucks Australia website (www.ramtrucks.com.au), the 1500 TRX’s addition to the local range is not guaranteed. 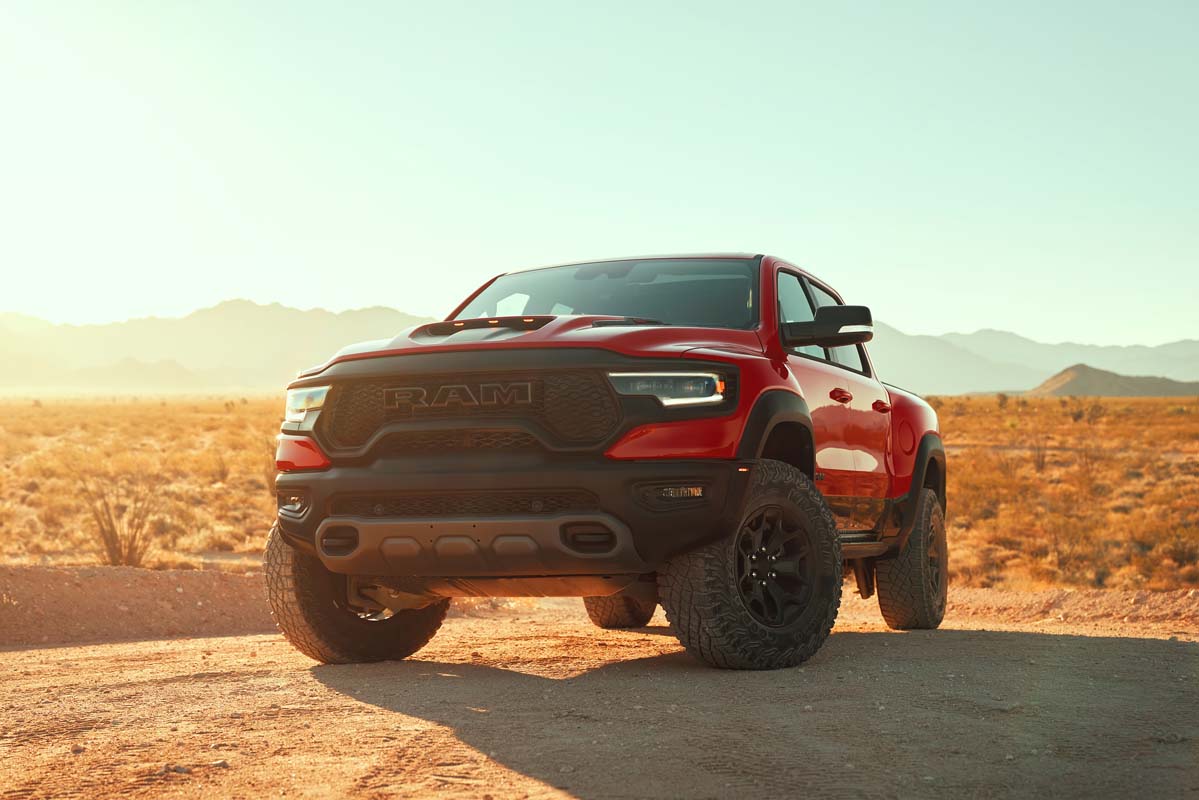 Should it come here, the 1500 TRX will inevitably be compared to the Ranger Raptor, but that’s a different animal and, as already mentioned, this pickup’s direct rival is the F-150 Raptor that isn’t officially available here.

RAM Trucks Australia has already proven there’s a local market for $100,000+ pickups, but is there a market here for a unit costing close to $200,000? We’ll have to wait and see. 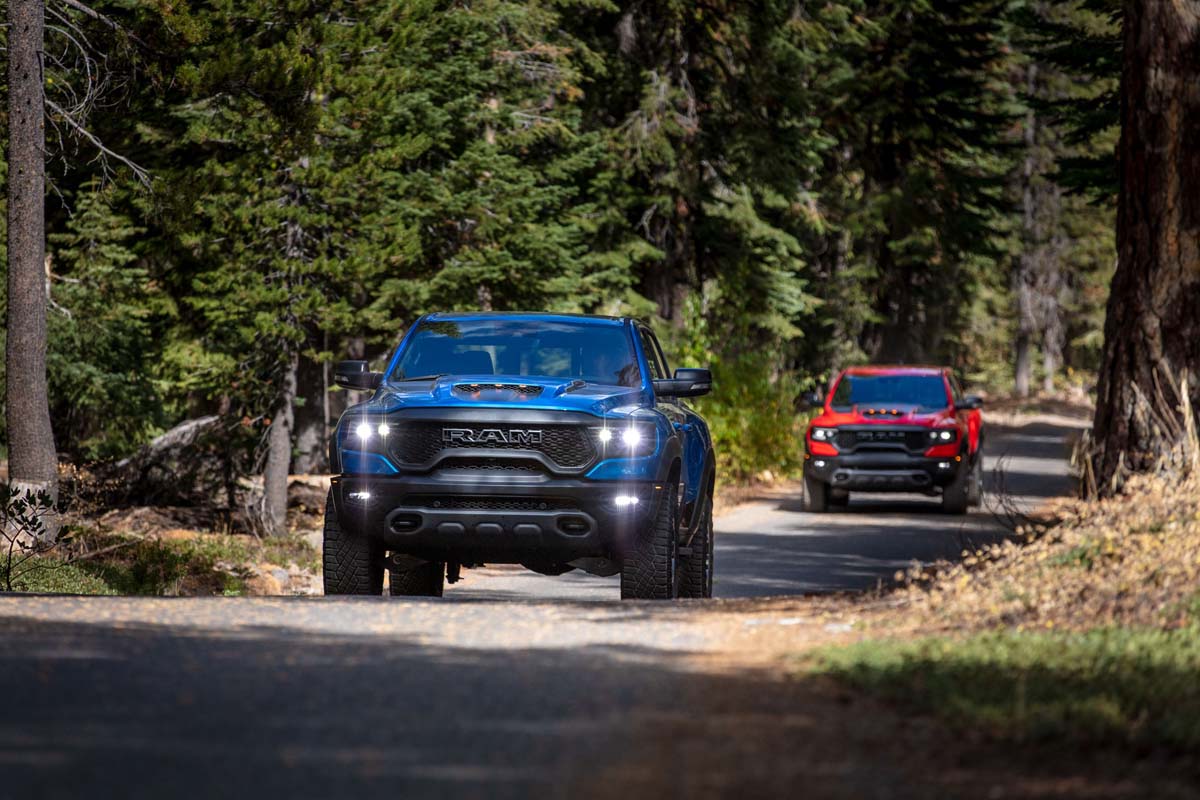 This past March, the first production RAM 1500 TRX – VIN# 001 – was auctioned through Barrett-Jackson to raise funds for United Way in the US.

As well as being the first built, the 1500 TRX offered was one of 702 Launch Edition versions, which sold out in less than three hours when online orders in the US opened earlier this year. 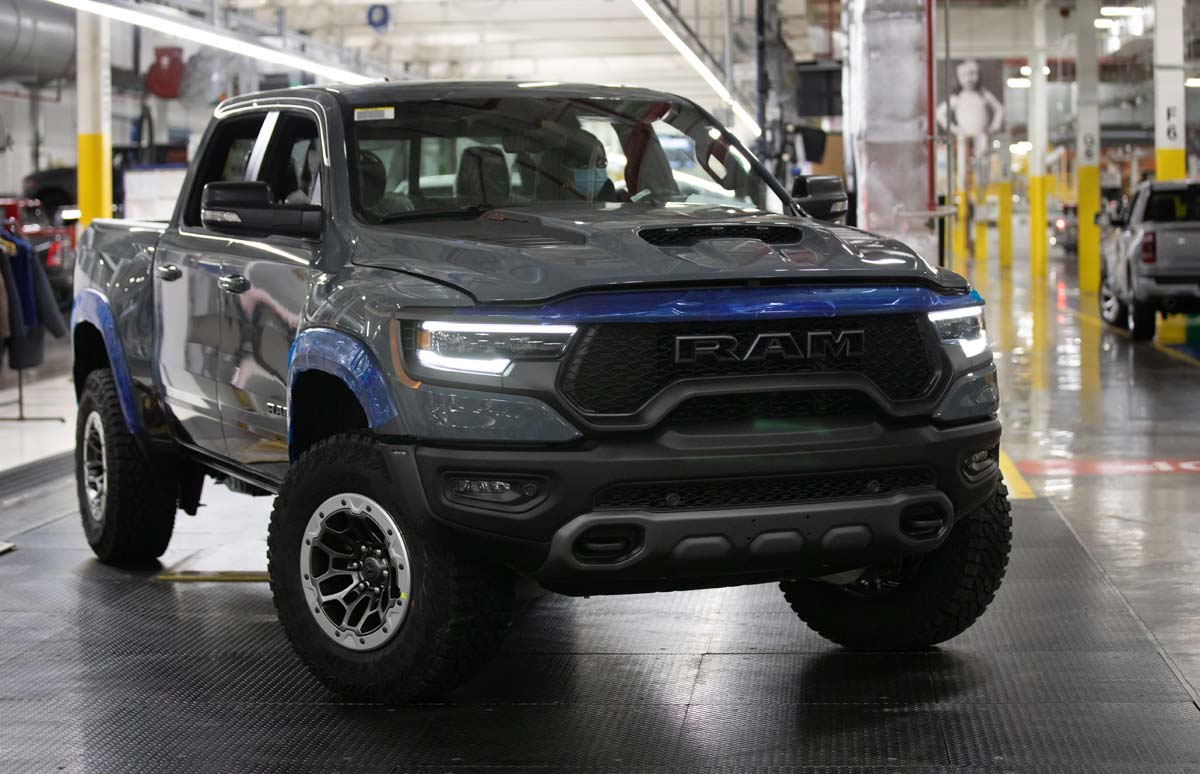 “When Ram 1500 TRX VIN 001 rolled off the assembly line, it instantly became an incredibly exciting one-of-a-kind collectible truck, and that was reflected by the winning bid,” said Mike Koval Jr., Ram Brand CEO.