Jeep hasn’t been averse to tapping into their history when creating concept vehicles to wow Jeep aficionados at the annual Easter Jeep Safaris. This year was no exception, with the ‘Jeepster Beach’ concept inspired by a somewhat forgotten model from Jeep’s past. 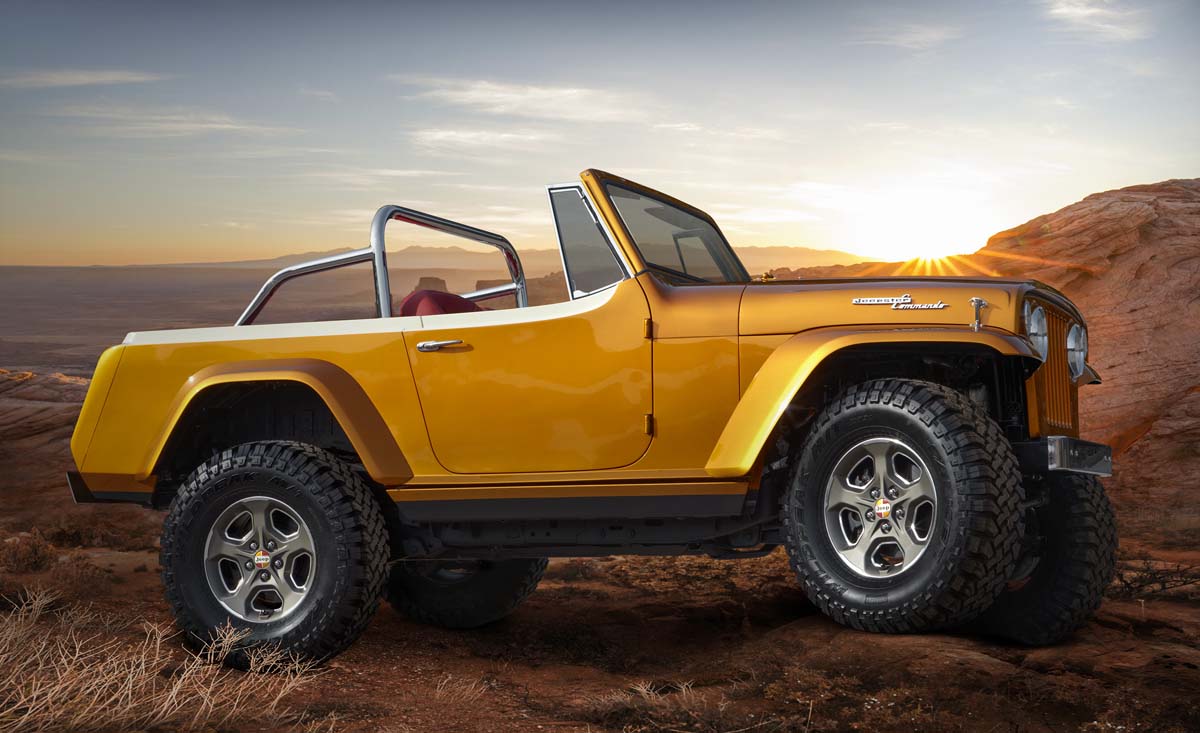 In the long history of the Easter Jeep Safari, the Jeepster Beach is the first concept to be based on the Jeepster Commando, matching a modified 1968 ‘C101’ Jeepster body to the chassis and running gear of a 2020-model Jeep Wrangler Rubicon. 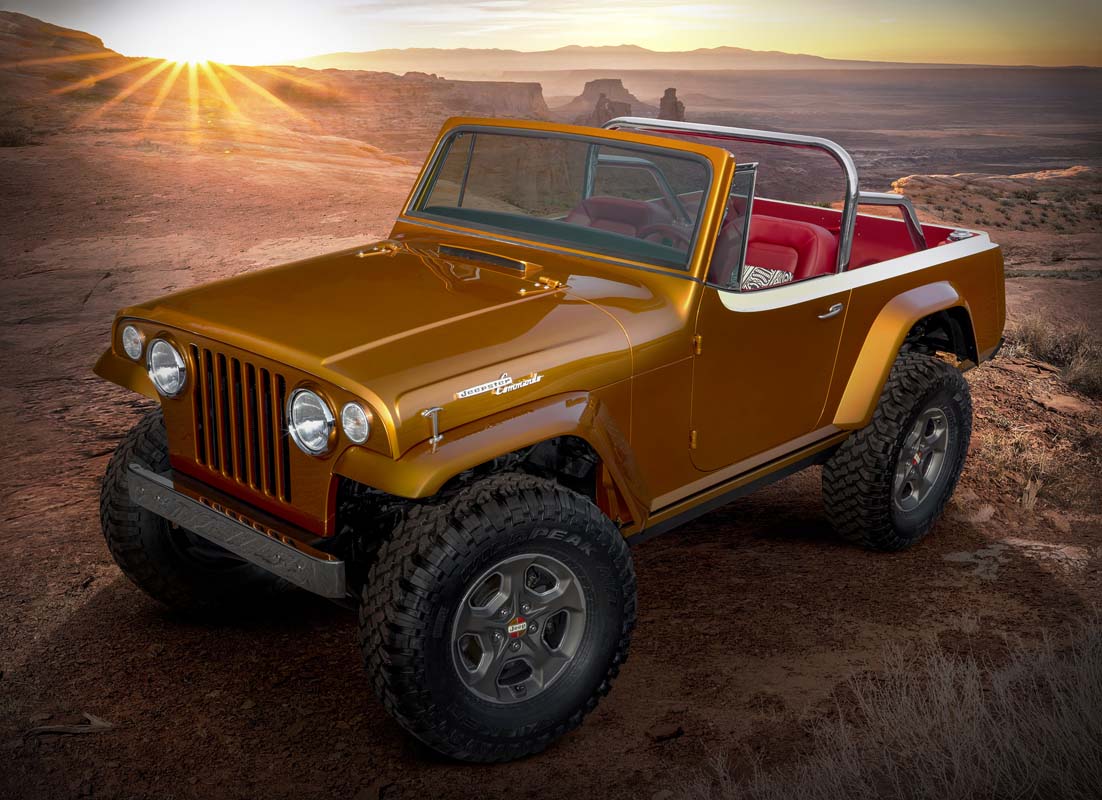 The C101 (referring to a 101-inch wheelbase) was actually the second-generation Jeepster, following the original – still with Willys-Overland identification – that was released in 1948. 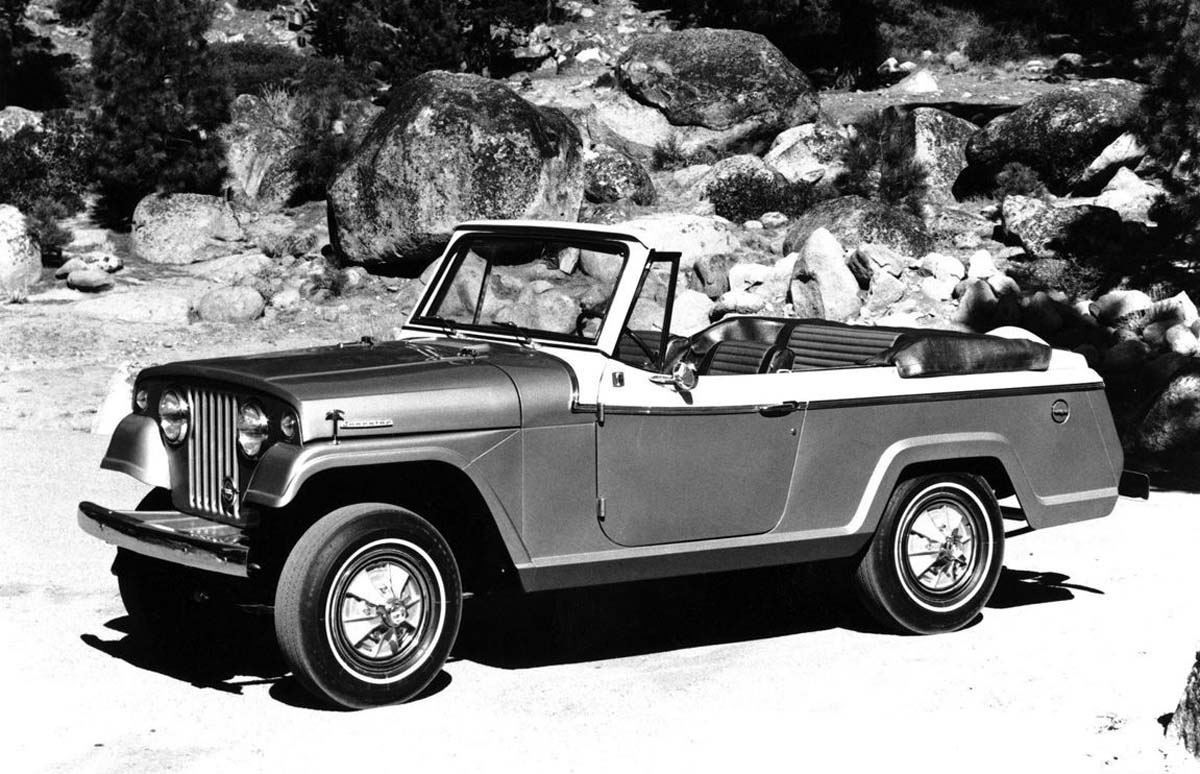 Debuting in 1966 as a 1967 model, the Jeepster Commando aimed to tap into the growing interest in leisure time use of 4x4 vehicles that the International Scout and Ford Bronco were also cashing in on.

What set the Jeepster apart from the more utilitarian CJ models was its modern – for a Jeep - amenities, such as doors, wind-up windows, a heater and removable roof as standard equipment. Different roof options allowed the Jeepster Commando to be used as a wagon, small pickup truck, or open roadster.

The Jeepster Commando was also the first production Jeep and first American-made compact four-wheel drive offered with an automatic transmission.

The original Jeepster Commando was made for fun in the sun, and Jeep say this carefree attitude has been reborn in the Jeepster Beach concept. 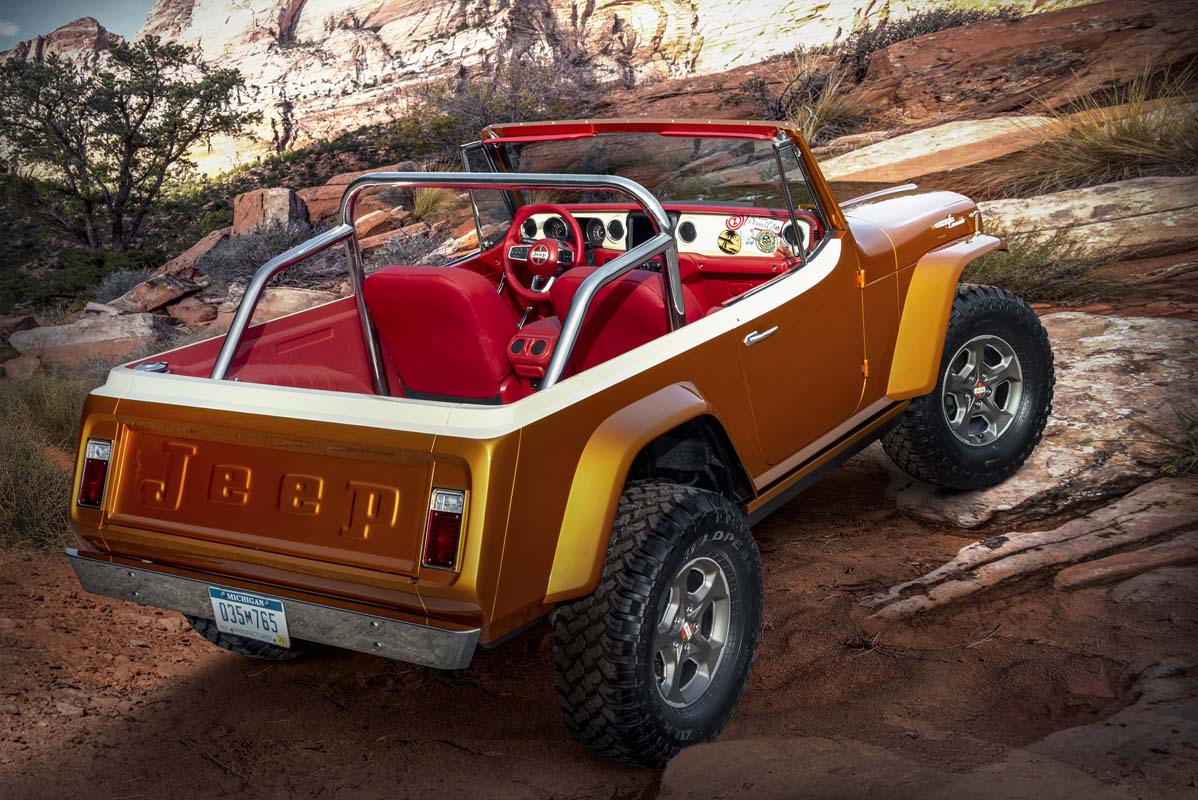 The concept features a C-101 body that’s been shortened by around 150mm to suit the Wrangler’s 96.8-inch wheelbase, but retains original chrome trim and badging. The two-tone paint scheme - ‘Hazy IPA’ (a bronze shade that takes its name from a type of American beer) with ‘Zinc Oxide’ (white) accents - is more classic-inspired than classic. 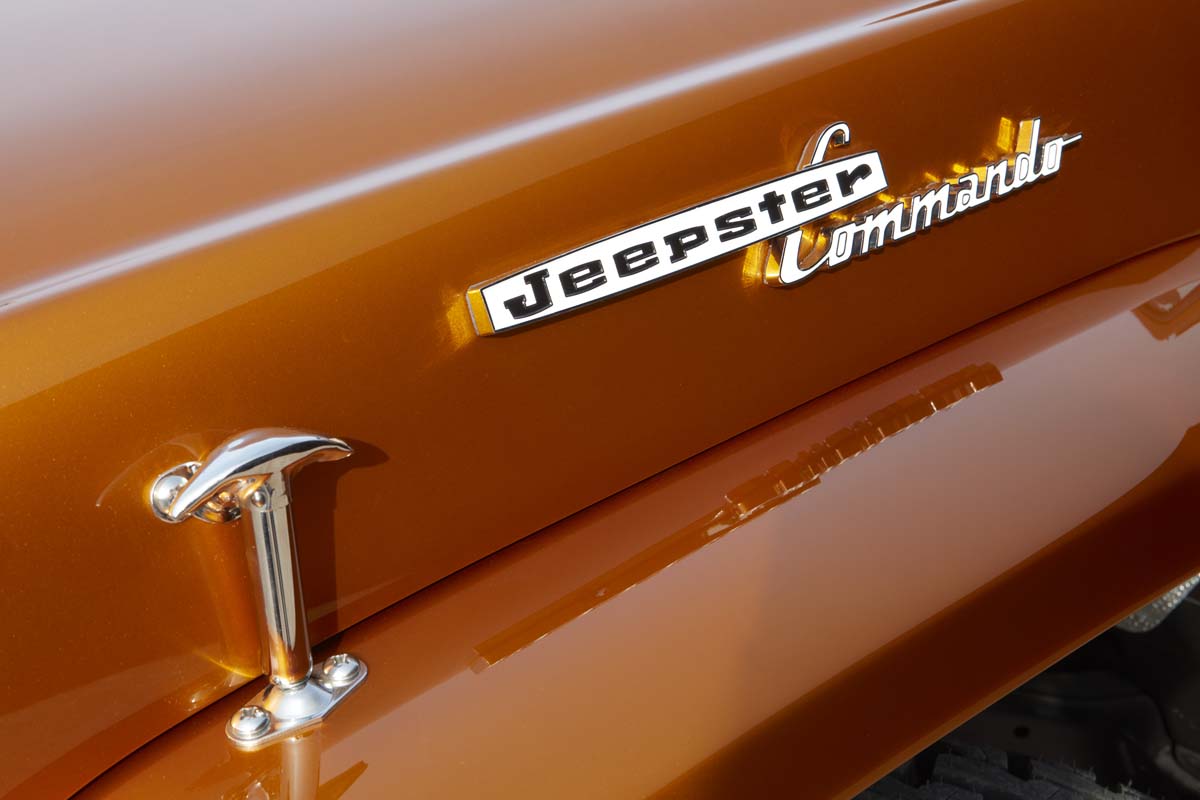 Under its custom body, the Jeepster Beach features a 2.0-litre four-cylinder turbo petrol engine with concept calibration to increase output to 253kW (340hp) and 500Nm (369lb/ft) - around 25 per cent more than the production version of this engine. Using a twin-scroll, low-inertia turbocharger mounted directly to the cylinder head, along with a dedicated cooling circuit for the turbocharger, intake air and throttle body, this direct-injection engine delivers what Jeep claims is exceptional responsiveness, performance and fuel efficiency.

An eight-speed automatic transmission and Wrangler 4:1 transfer case have been fitted, while the concept’s wheels feature old-style centre caps. The tyres have been upgraded to 35-inch Falken Wildpeak M/Ts, with wheelarch flares modified to suit. 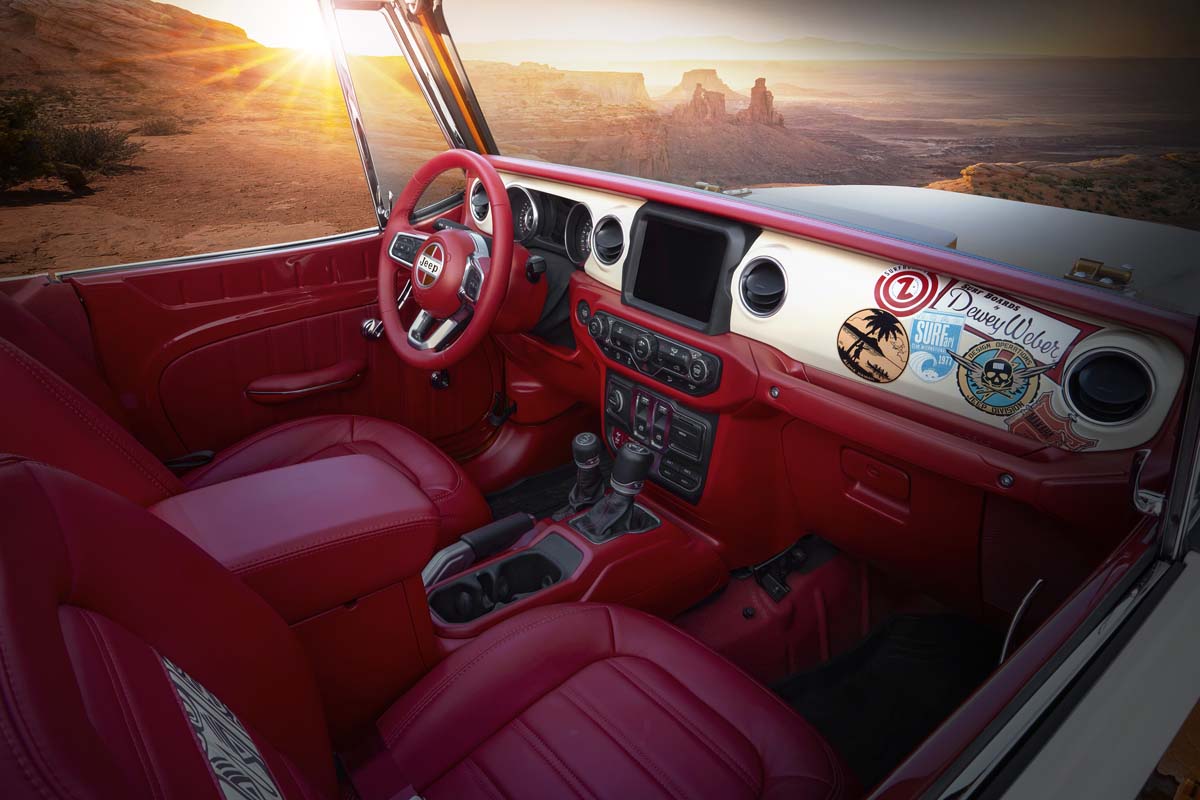 Inside, the Jeepster Beach is a feast of red - from the sunvisors to the tailgate – and features the steering wheel, instruments, Uconnect touchscreen, air vents, switchgear and centre console from a current JL Wrangler.

Adding a retro look to this modern interior is an old-style Jeep logo on the steering wheel boss and classic surf-themed decals on the dash. 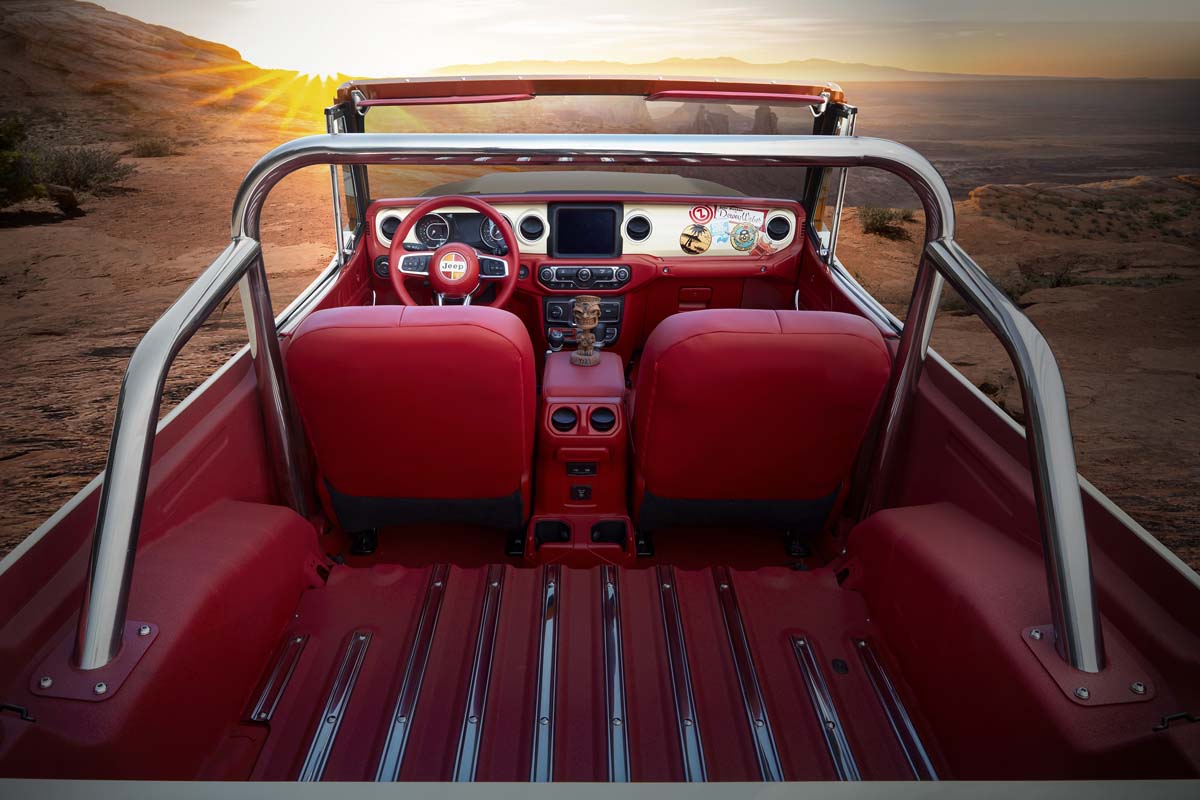 Low-back front bucket seats have been trimmed in red leather, with Tiki-themed inserts on the uprights. The Jeepster Commando was normally a four-seater, but for the Jeepster Beach concept, the rear seat has been removed, replaced with a chromed four-point roll bar.

Finally, to make cleaning easier after a day at the beach, the carpets have been removed, replaced with a spray-in bedliner and removable floor mats.