While some concepts at the annual Easter Jeep Safari are fanciful one offs that’ll never come close to production, the ‘Orange Peelz’ concept is more grounded. Packed with prototype and production Jeep Performance Parts, as well as parts from the Mopar catalogue, the Orange Peelz demonstrates the sort of customisation options possible for a stock Wrangler. 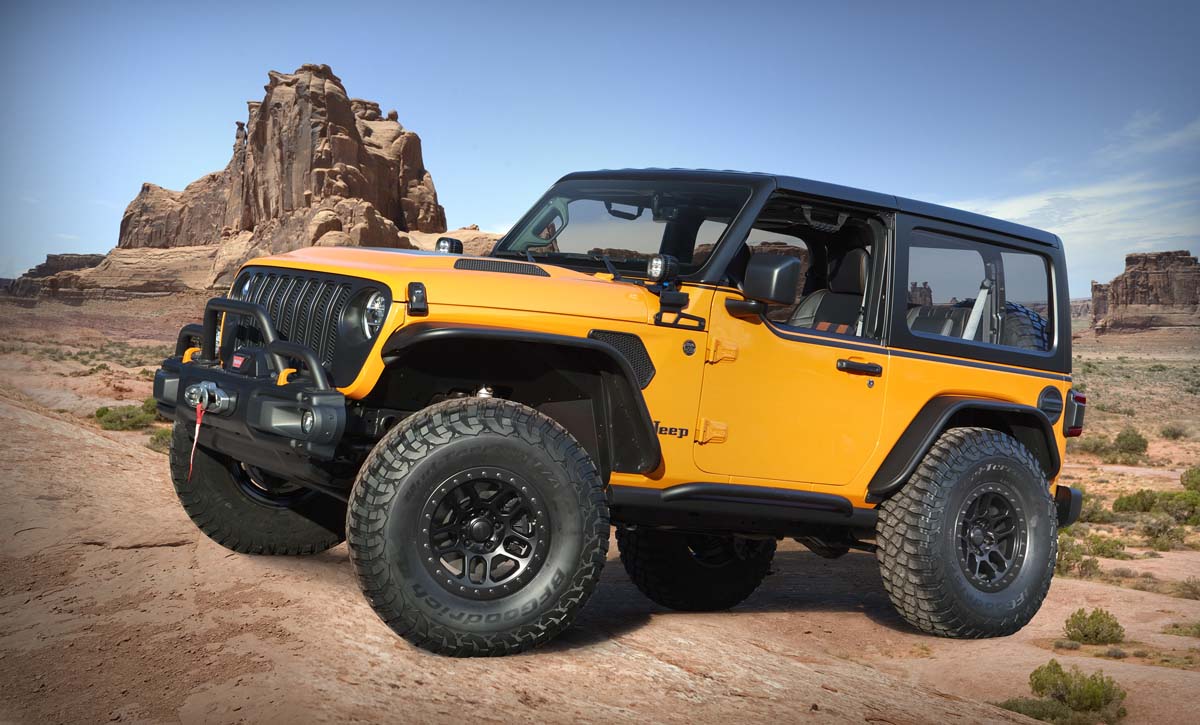 Based on a current two-door JL Wrangler, key additions on the Orange Peelz are prototype Jeep Performance Parts (JPP) half doors and a customised removeable once-piece Freedom Top with a built-in sunroof.

By removing the side and rear glass, Mopar designers say they’ve vastly enhanced the Wrangler’s open-air heritage, while the windscreen has been updated with a factory-backed Mopar screen made with Corning Gorilla Glass that offers protection from chips and cracks. 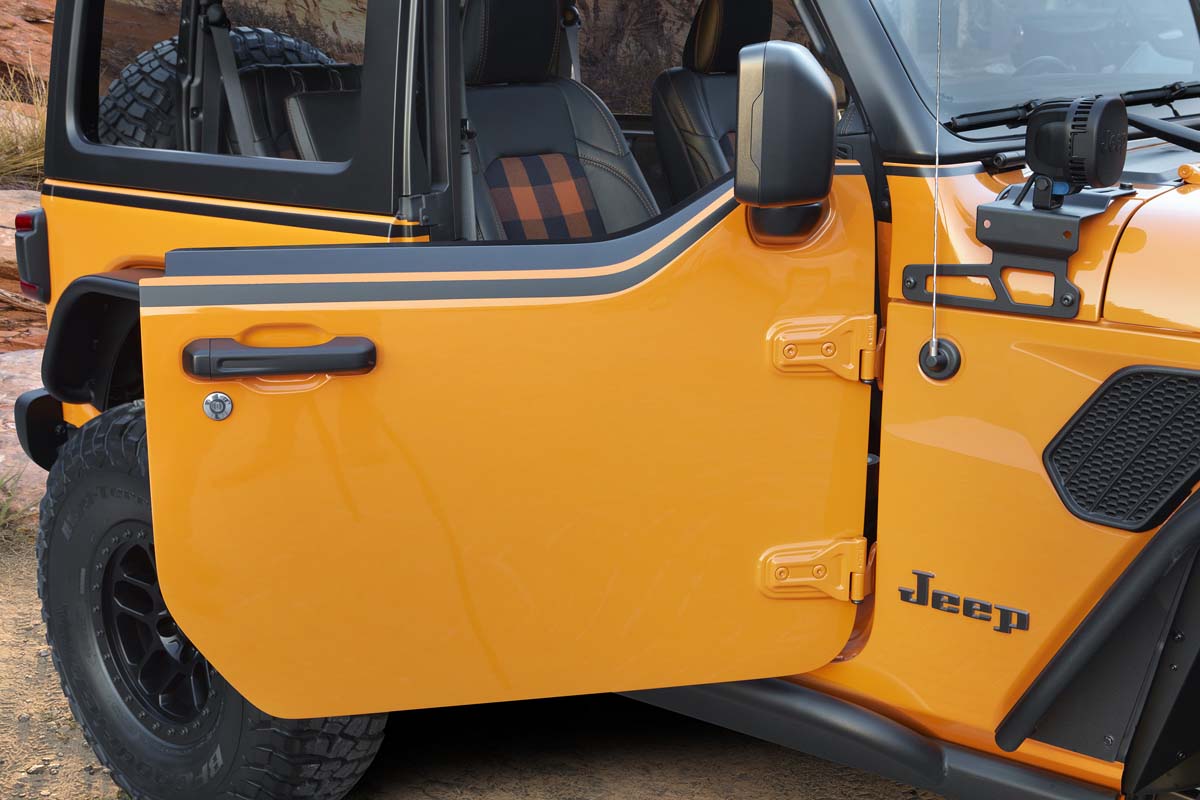 The concept’s name comes from the bold exterior colour, which is complemented with a Satin Black custom beltline graphic and Satin Black vintage Jeep badges on the front guards. Along with the main body colour, the front and rear tow hooks are also finished in Orange Peelz.

The bonnet is a concept item and features custom black Mopar latches with the Jeep Willys logo. Aft of the bonnet, JPP 5.0-inch off-road LED lights, each of which provide 4,800 lumens of power, are mounted at the base of the A-pillars to light up the trails. 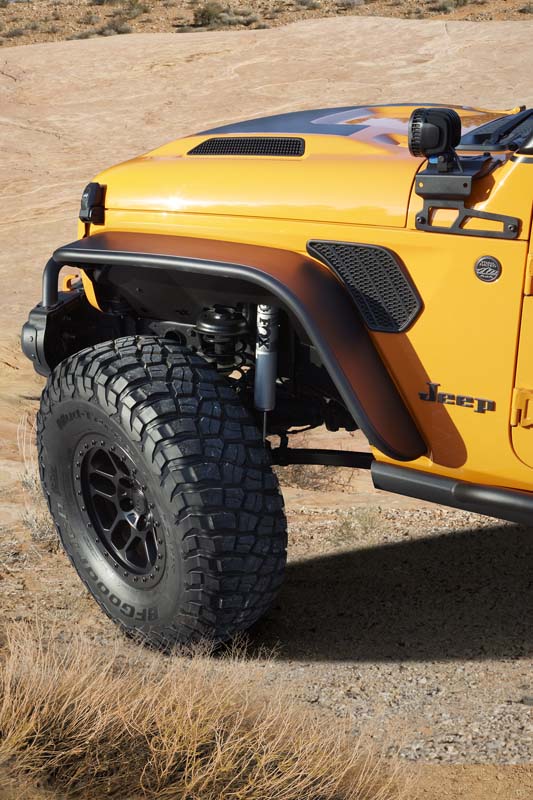 A customised JPP Rubicon steel bumper has also been fitted and includes a prototype 2-inch steel tube nudge bar (Jeep calls it a ‘grille guard’) and a JPP 8,000-lb capacity Rubicon Warn winch. Complementing the nudge bar are custom rock rails with a sturdy steel tube step for serious off-roading.
At the back end, the addition of a JPP Swing Gate Hinge Reinforcement allows for a larger spare wheel to be fitted. Designed to work with the production hinge, this reinforced part has been powder-coated black on the Orange Peelz concept. An addition to this is a JPP CHMSL (Centre High-Mount Stop Lamp) Relocation Kit that mounts the third brake light in the centre of the spare wheel. 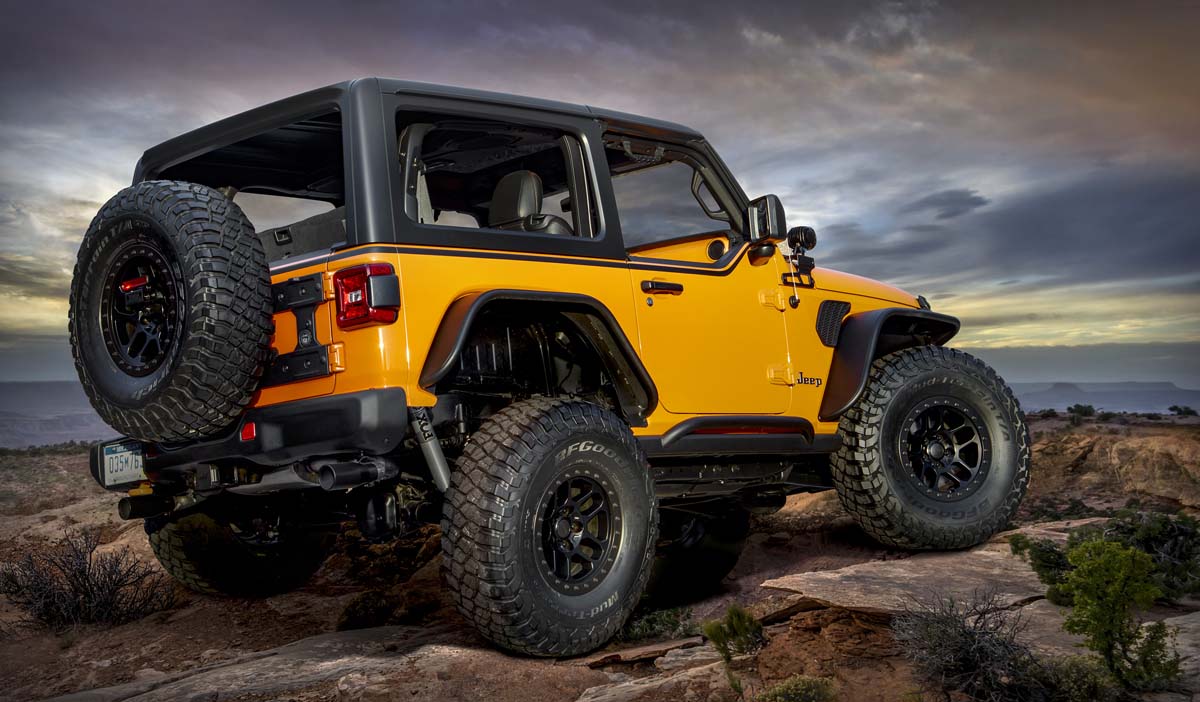 Entry to the lifted concept is made easy by JPP grab handles, while inside the cabin, the most striking feature is the orange plaid fabric detailing, which has been added to the Katzkin leather seats, the armrests and the top of the centre console storage box. 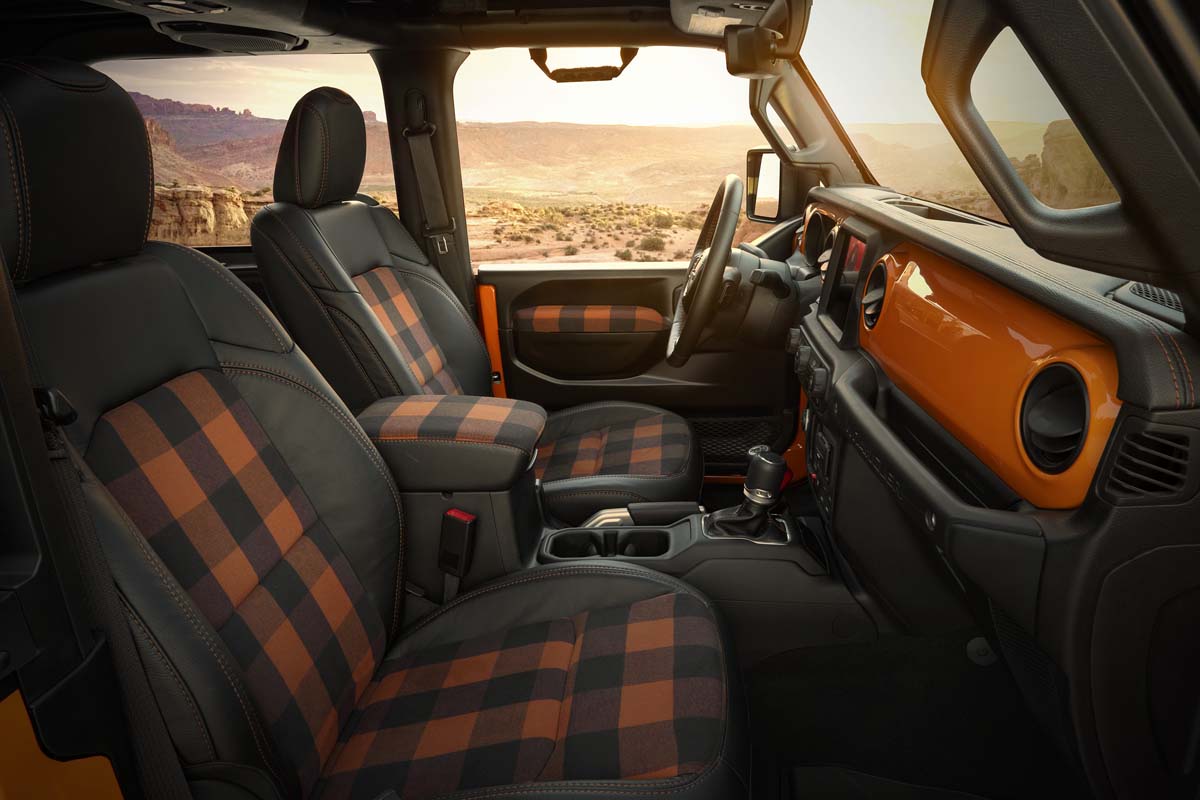 Orange Peelz paint makes its way inside to the dash, while orange stitching has been added to the seats, steering wheel, shifter boots, parking-brake handle and dash top.
Mopar stainless steel pedal covers with rubber pads are fitted, while the door sills are protected by black guards that feature the vehicle’s logo.
Also fitted inside the cabin are Mopar all-weather floor mats that are injection moulded and feature deep rigid sidewalls and “advanced reservoir systems” to contain liquids. The front mats also feature patented drain plugs that align with the Wrangler’s floor drain holes, allowing drainage without removing the mat. 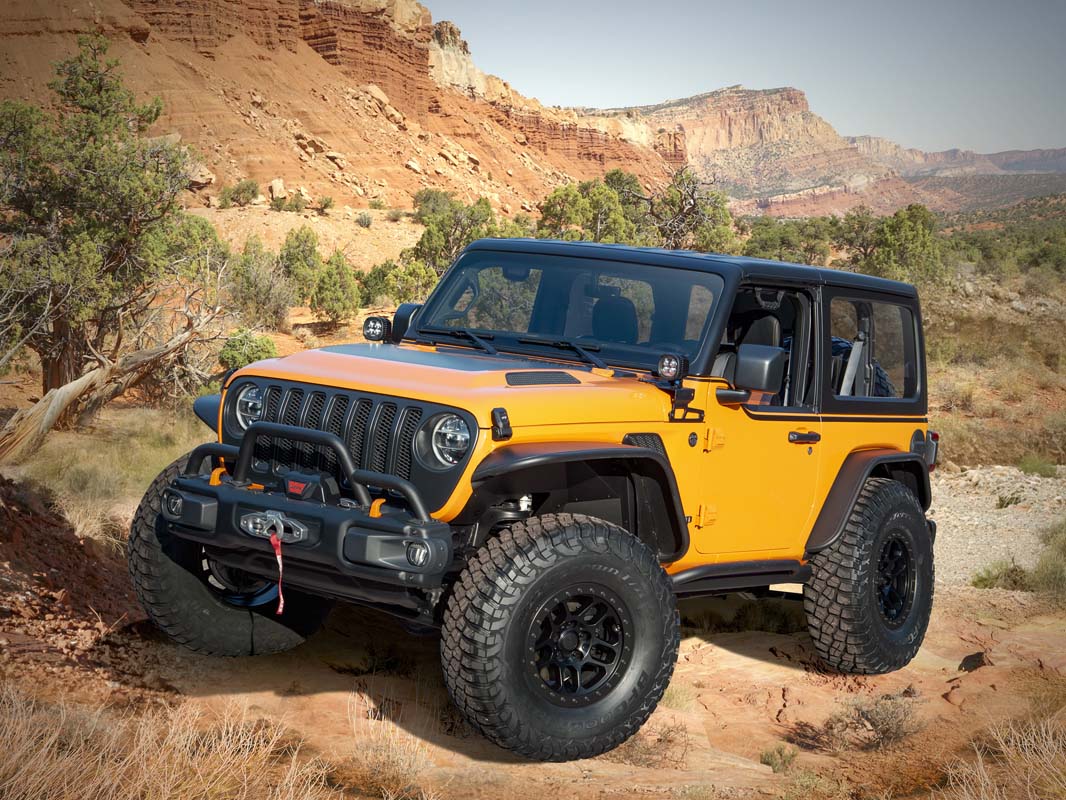 The Jeep Orange Peelz concept is powered by the 3.6-litre Pentastar V6 that’s standard on Wranglers sold in Australia and offers 212kW (285hp) and 352Nm (260lb/ft). Matched to a TorqueFlite eight-speed automatic transmission, this petrol engine has been upgraded on the concept with the addition of a JPP cold-air intake and JPP cat-back exhaust system.

With its abundance of JPP and Mopar parts, the Orange Peelz concept shows what’s possible with Wrangler modification.