Described as “stealthy, quiet, quick and an unmistakable rock-climbing force,” the Jeep ‘Magneto’ concept is based on a 2020-model 2-door Wrangler Rubicon, and while it looks like a custom-paint-and-wheels job at first glance, there’s a lot more going on under that bright white skin. 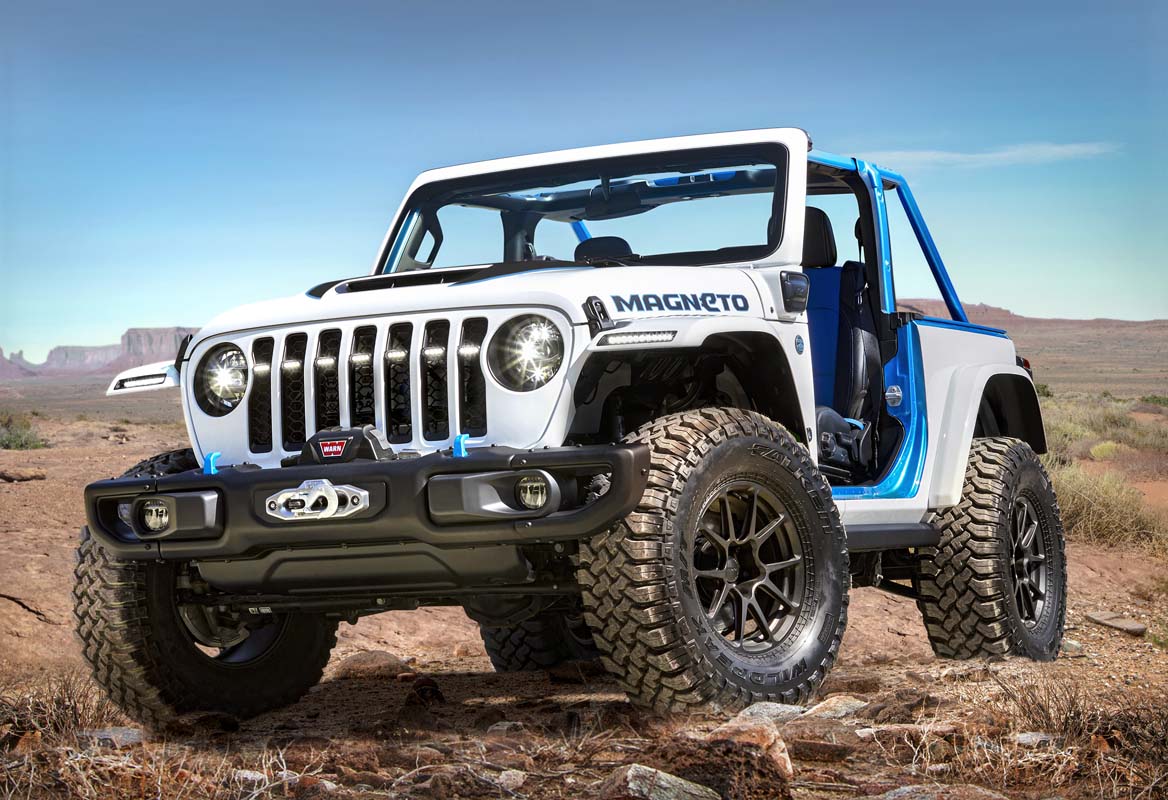 Unveiled at this year’s Easter Jeep Safari in Moab, Utah, the Magneto is the first-ever factory Jeep concept presented at the annual celebration of all things Jeep to feature a zero-emissions powertrain.

A custom-built axial flux electric motor that can spin up to 6,000rpm replaces the 3.6-litre petrol V6, 2.2-litre turbodiesel four-cylinder or the new 2.0-litre turbo petrol four-cylinder engine normally found under the bonnet of a Jeep Wrangler. 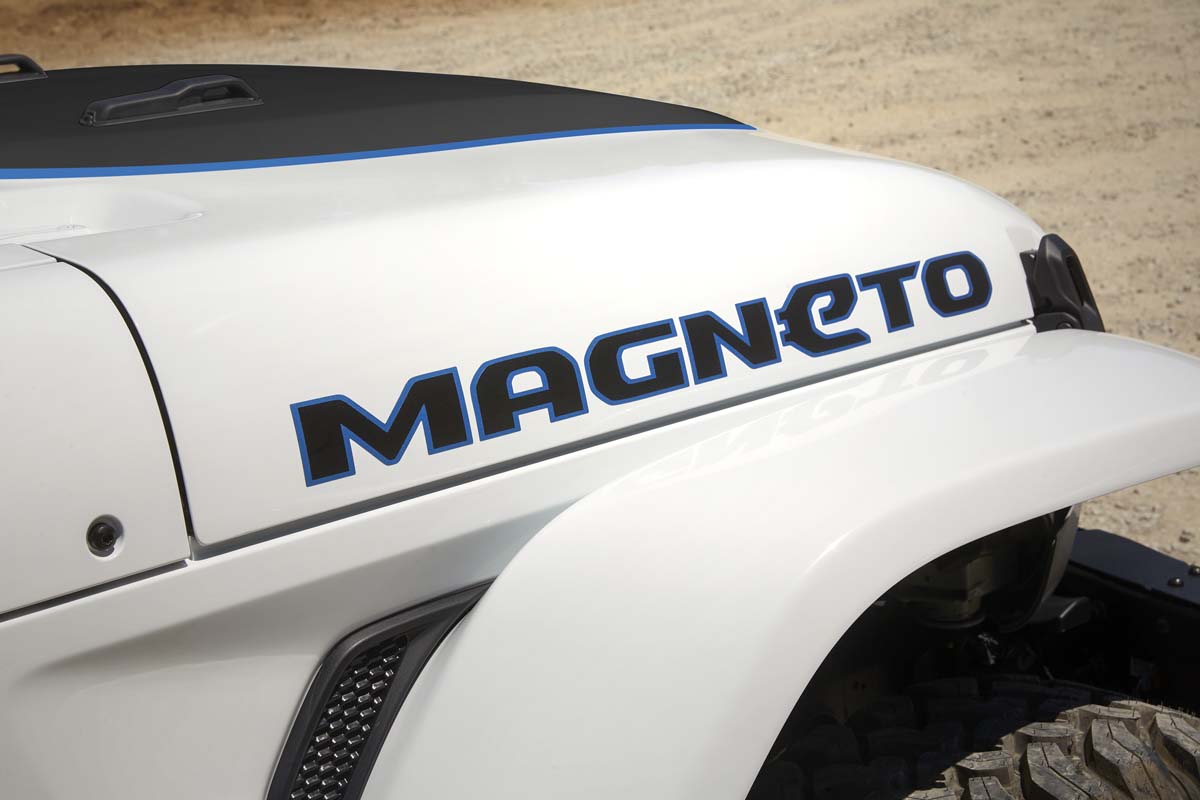 Rather than mount the ‘e-motor’ on an axle, it’s connected to a conventional six-speed manual transmission on the Magneto, creating a unique manual-electric powertrain combination. According to Jeep, the clutch operates as it would with an internal combustion engine, but in quick-shift scenarios, the e-motor engages regeneration upon clutch engagement to prevent rev-hang.
The compact e-motor is tuned to deliver up to 212kW (285hp) and 370Nm (273lb/ft), comparable to the output of Jeep’s 3.6-litre Pentastar V6 petrol engine 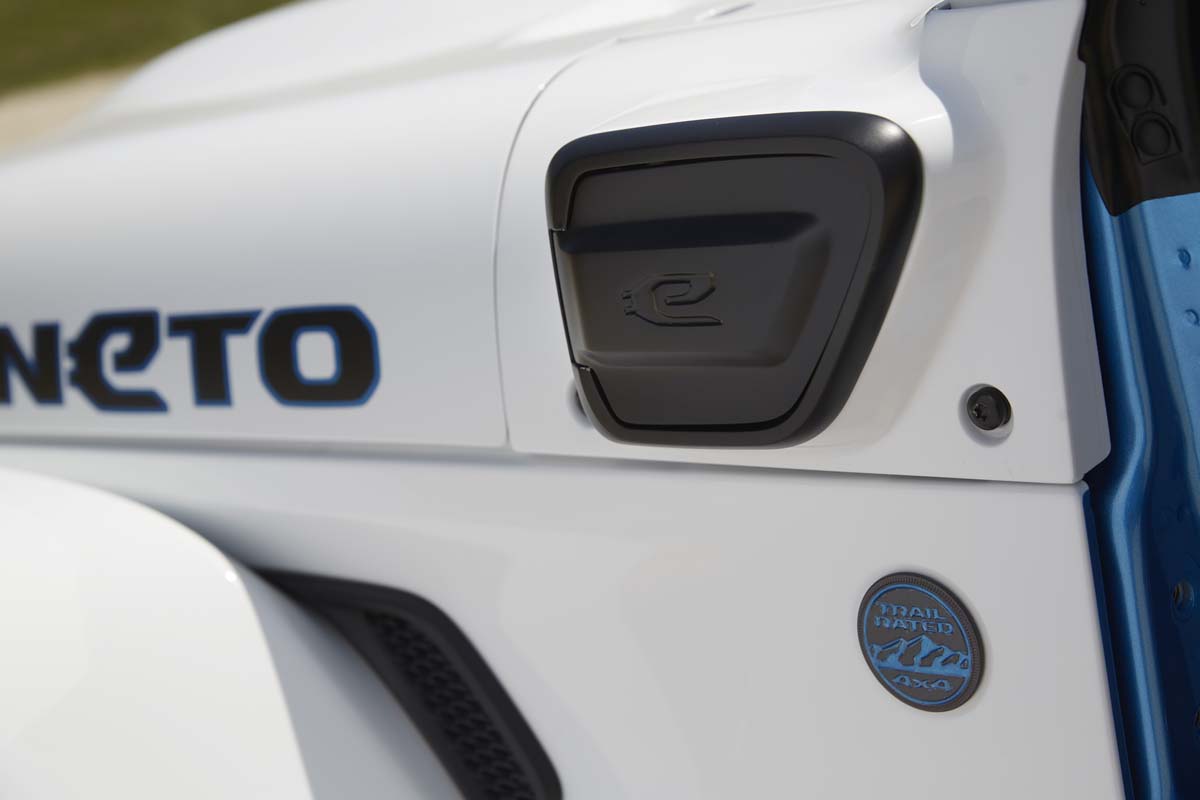 As well as its power and torque outputs, calibration of the electric powertrain was designed to emulate the driving experience of the V6. According to Jeep, the performance difference between the V6 and the Magneto’s unique manual-electric powertrain is negligible except for near-silent operation during moderate driving. When greater acceleration is needed, the e-motor delivers all 370Nm of torque to all four wheels without the need to build up revs. The Magneto concept runs the 0-60mph (0-97km/h) sprint in 6.8 seconds.
Powering the Magneto’s e-motor, via a racecar-derived inverter, are four separate lithium-ion battery packs with a combined power of 70kW/h on an 800-volt system. To balance weight over all four wheels, the batteries are distributed at various points of the vehicle. One pack replaces the Wrangler’s offside mid-mounted fuel tank, while a second is mounted on the nearside. A third sits on top of the e-motor, with the fourth pack in the rear storage area, also taking space typically occupied by the exhaust system’s muffler. 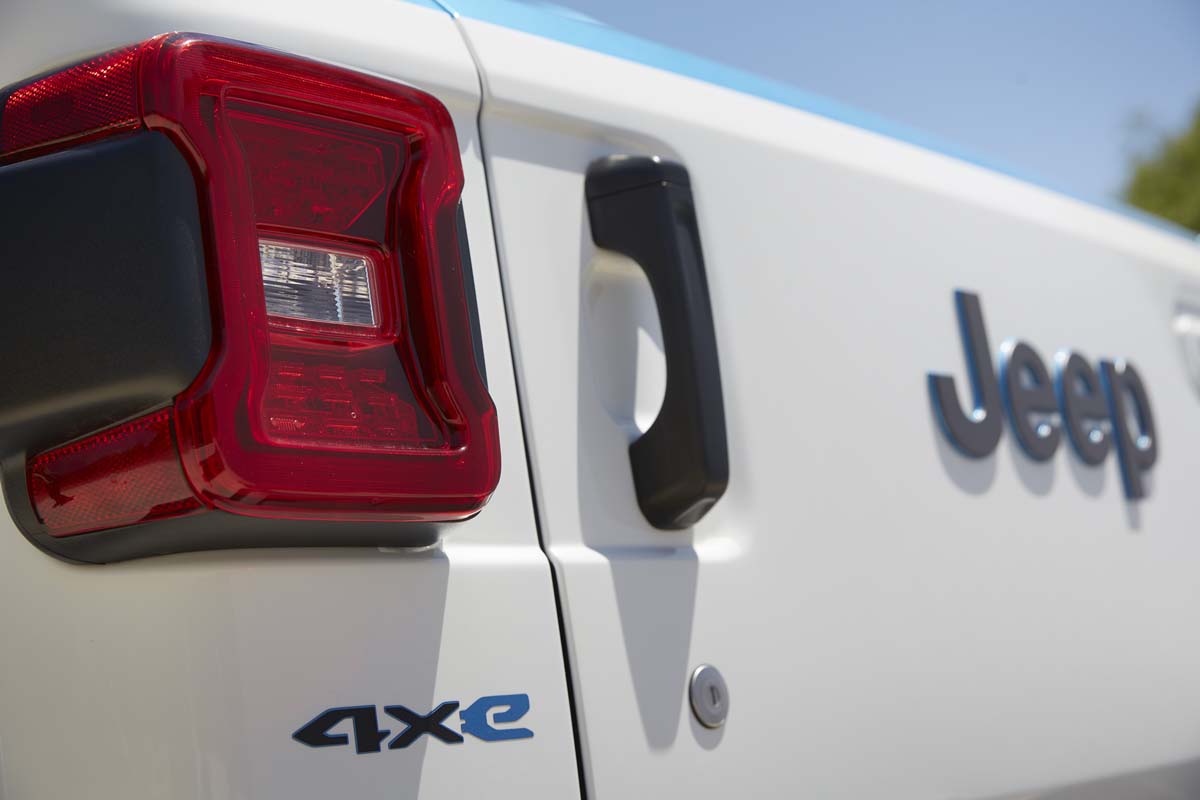 The batteries, vehicle interface box and battery control module all reside in waterproof cases to maintain the Wrangler’s 76cm (30-inch) wading depth. Unique mounts secure the battery packs in place and custom skid plates protect them from damage while traversing harsh terrain.
Existing electrical systems, such as the radio and lighting, are powered by a 12-volt battery, with a second 12-volt battery added as an auxiliary power unit for accessories, like the concept’s Warn winch.

A DC-to-DC converter charges both 12-volt batteries, allowing long-term operation of accessories, like a lengthy winch operation or providing power at a campsite.
It seems an odd addition in an open-air vehicle, but the Magneto also features a 10kW high-voltage heater “to keep the passenger compartment comfortable”. 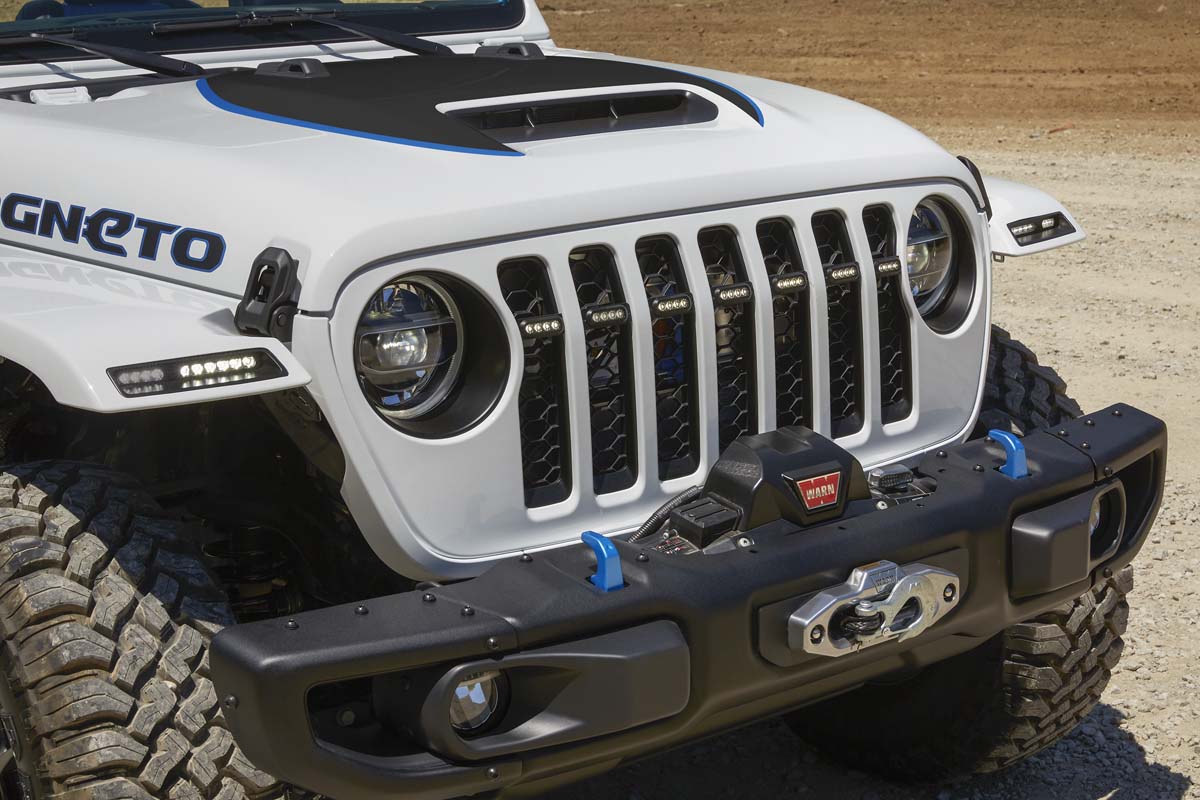 A heavy-duty performance bonnet features a centre scoop, which would normally be used to feed air to the ICE engine. Whether it serves a cooling function for the e-motor or battery pack is unknown.

In the Magneto’s cabin, custom Royal Blue and Black leather seats feature Sapphire-coloured inserts and straps. Mopar slush mats are fitted and the rear storage area has been sprayed with a bed liner in Surf Blue. 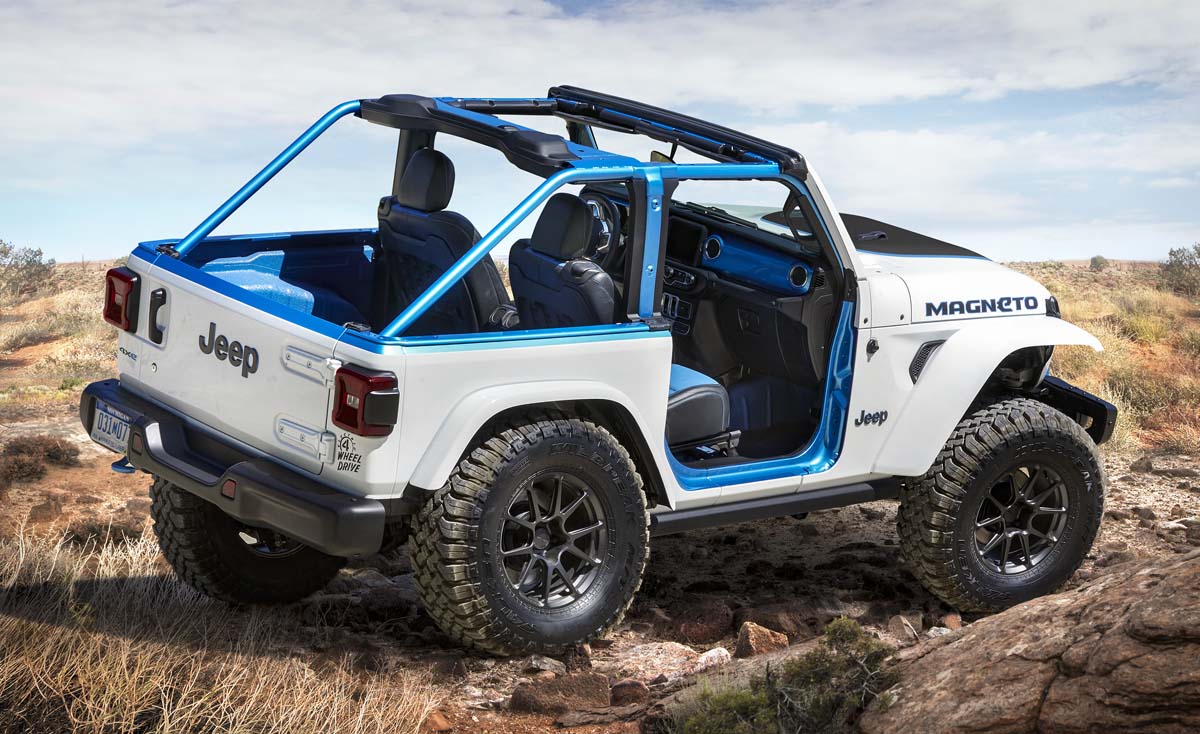