After an absence of almost 25 years, the Ford Bronco is back

Where the two-door Bronco is a four-seater only, the four-door has room for five. That’s the key difference with the four-door Bronco, as the running gear, mechanical spec, options packs and many other features are identical. 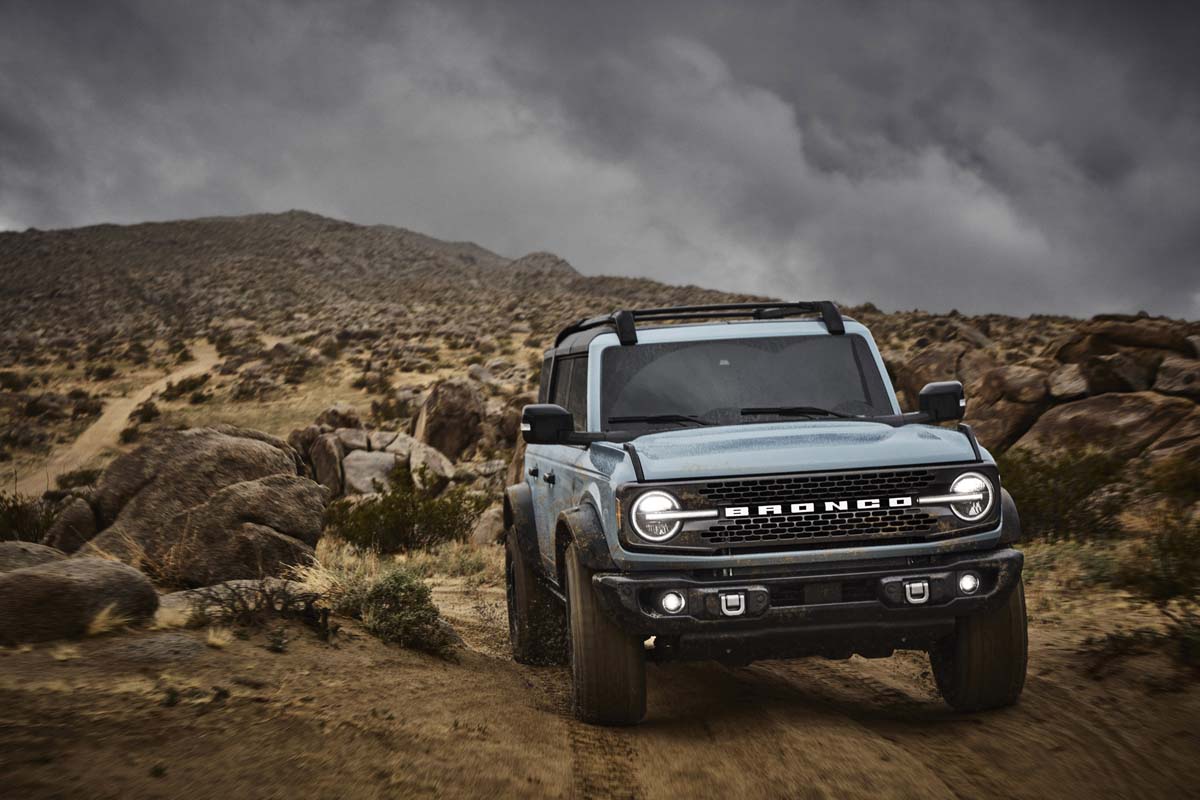 A cloth soft top is standard on the four-door Bronco and includes a “tilt up” function that allows for easy access to the cargo area, while the modular hardtop is optional, but buyers can order both tops.

The modular hardtop roof system is made up of four sections (three on the two-door) and all panels can be removed by one person. One-bolt attachment and included grab points on the doors make their removal easier, too, while the doors can be stowed in the cargo area once removed: a feature unavailable on the Jeep Wrangler.

Remove those roof panels and you’ve got real open-air motoring. While the door frames are chunky (to incorporate the side curtain airbags), the roof is open, with no continuation of the B-pilllar across the roof as the roll bar protection is incorporated aft of the C-pillar.

Another note on the Meccano-like structure of the four-door Bronco, that also applies to the two-door, is that the rear quarter windows can be removed without the need for tools and without taking off the roof panels.

Interior features are shared with the two-door and include an instrument panel inspired by the first Bronco, but upgraded with a full-colour LCD display. The rest of the dash is minimalist in design, with the centre console touchscreen flanked by air vents and bold BRONCO identification in front of the passenger. Depending on trim level, the touchscreen for Ford's SYNC 4 infotainment system is either 8 or 12 inches, with the latter claimed as the largest in its class. SYNC 4 allows over-the-air updates and seamless integration to the FordPass Performance app with off-road navigation – a Bronco class-exclusive feature that allows owners to easily plan, navigate and share their off-road adventures.

“The trail mapping system available on Bronco is truly a game-changer in the off-road community,” says Mark Grueber, Bronco consumer marketing manager. “It works online or off, on either of the navigation-capable 8- or 12-inch SYNC systems, allowing users to select one of hundreds of available curated trail maps to map out and then track, capture and share their adventures with others.”

As mentioned, Ford branding is virtually non-existent inside the Bronco, but there are lots of funky design details, while modularity allows certain features, like passenger grab rails, to be removed easily or updated with other parts.

With the same exterior design that includes minimal front and rear overhangs, approach angle is the same as the two-door Bronco, varying from 35.5 to 43.2 degrees, but the departure angle drops marginally, to 29.7/37.0 degrees, depending on wheel/tyre and suspension package. Obviously, the longer wheelbase impacts the four-door’s breakover angle, which drops to 20.0/26.3, depending on wheel/tyre and suspension package.

Ground clearance of between 210mm and 292mm is almost identical to the two-door Bronco, but fording depth is the same, at up to 851mm with the Sasquatch packages.

Max towing capacity is shared with the two-door at 1,587kg, as is the 204kg maximum static roof load, but max payload increases to 621kg.