After an absence of almost 25 years, the Ford Bronco is back

The truest of the three new Broncos to the original, the two-door Bronco will likely be the most popular, too.

Due for US release early next year, the two-door is the same as the four-door in most aspects, aside from its doors and seating configuration, obviously. Styling is pretty much identical, too, but there are subtle differences, like the grille pattern.

With its upright appearance, flanked by round headlights, that grille is the most obvious nod to the original Bronco from 1966, but the full width FORD identification has been replaced with BRONCO. This brings up an interesting element to the Bronco’s design – there’s no Ford identification on the exterior of the vehicle. No Ford badge or Blue Oval anywhere outside and it’s largely the same story inside, with just a small plaque near the gear shifter declaring it’s a Ford product. This, apparently, is a deliberate ploy on Ford’s behalf, as they are aiming to make the Bronco a standalone model in a similar way to what they’re doing with the Mustang.

The small ‘peak’ to the front guards is another nod to the 1966 Bronco, as is the subtle bodyside crease.

Other notable design features include deceptively simple wheelarch flares (that are removable) and an equally subtle standard front bumper with tow hooks and built-in fog lights. Clever touches include mounting points on the windscreen’s top edge for fitting roof racks and light bars, side mirrors mounted to the body (so they don’t come off when the doors do) and cleats on the front guards that serve as position markers when off-roading and tie-down points for cargo on the road, or tents when in camp.

That smart thinking continues inside, where there’s removable front passenger grab rails, optional MOLLE straps on the back of the front seats that allow a variety of items to be hung or fastened, and an accessory rail atop the dash that’s set up to hold smartphones, GoPros, etc., with USB plugs there, too, to minimise cable clutter.

Buttons for the diff locks and essential off-road functions are also topside of the dash, while the GOAT modes are selectable via a rotary dial alongside the gear shifter. 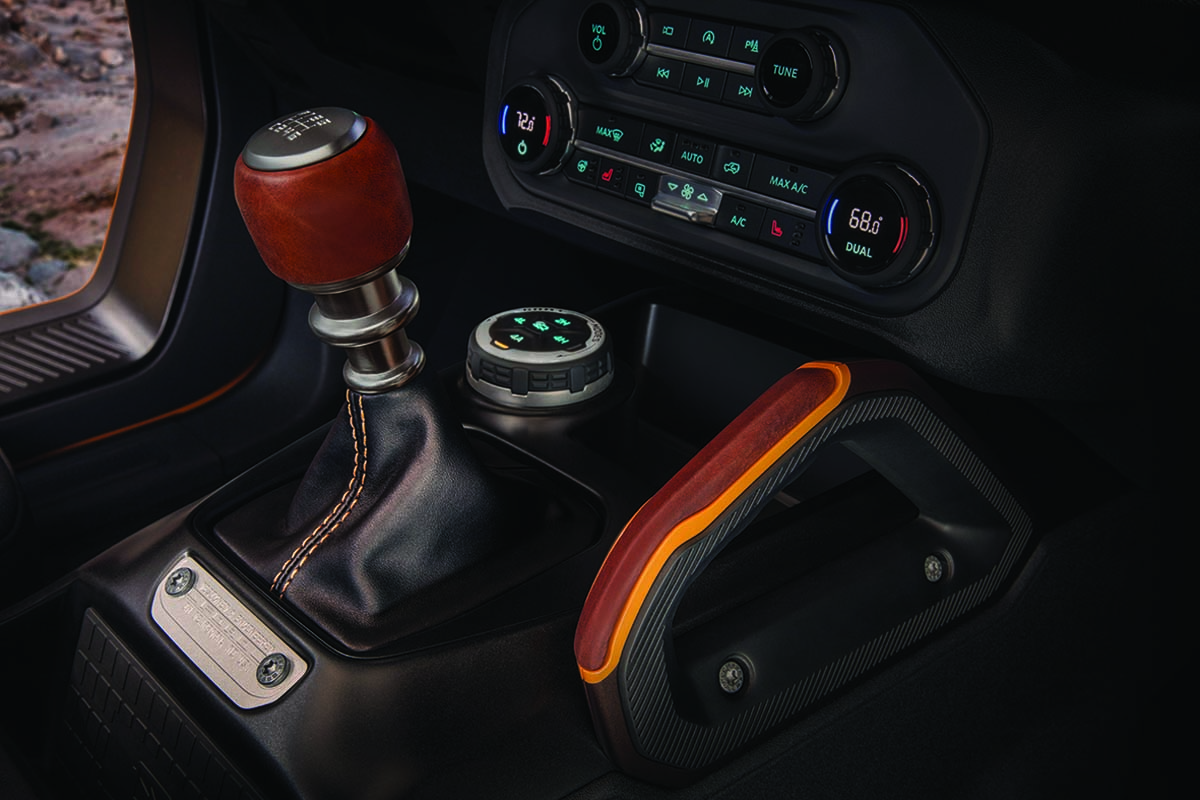 The two-door Bronco rolls on a 100.4-inch (2550mm) wheelbase, with LxWxH dimensions of 4412x1928x1826mm. Depending on added features like a roof rack or modular bumpers, these measures vary a little, as does fording depth, but that increases to a maximum of 851mm with the Sasquatch package.

Choice of wheels, tyres and suspension varies ground clearance from 213mm to 295mm and impacts approach/departure/breakover angles, too. The design’s minimal front and rear overhangs contribute here, with approach angle varying from 35.5 to 43.2 degrees, departure angle from 29.8 to 37.2 degrees and breakover angle from 21.1 to 29.0 degrees.

Max towing capacity is 1587kg, with a max payload of 530kg, including a 204kg maximum static roof load.