Even though there are plenty of factory packages and options for the new Bronco, Ford decided to push the envelope a little further…

Last year’s SEMA show was an online only affair, but it didn’t stop a number of businesses and individuals producing ‘real world’ vehicles for the annual auto aftermarket industry show.

Ford was one of many to get in on the action, presenting customised versions of the F-150, Ranger and new Bronco at an online event dubbed ‘Ford Auto Nights’. As well as the custom vehicle reveals, the two-day broadcast included customer and celebrity superfan stories, interactive “vehicle immersion” sessions and more.

While SEMA usually sees some wild and wacky one-offs on display, the custom pickups and SUVs created for Ford Auto Nights used mostly off-the-shelf parts from the Ford Accessories and Performance Parts catalogue (as well as other aftermarket suppliers) to demonstrate how Ford 4x4s – and particularly the Bronco - can be personalised easily without cutting or welding.

“From upfitters to outfitters, and from hot rodders to outdoor adventurers, our first-ever Ford Auto Nights SEMA Show Special keeps the customization and innovation going virtually,” said Kim Cape, director of Ford global brand and integrated marketing ahead of the 19-20 November event. 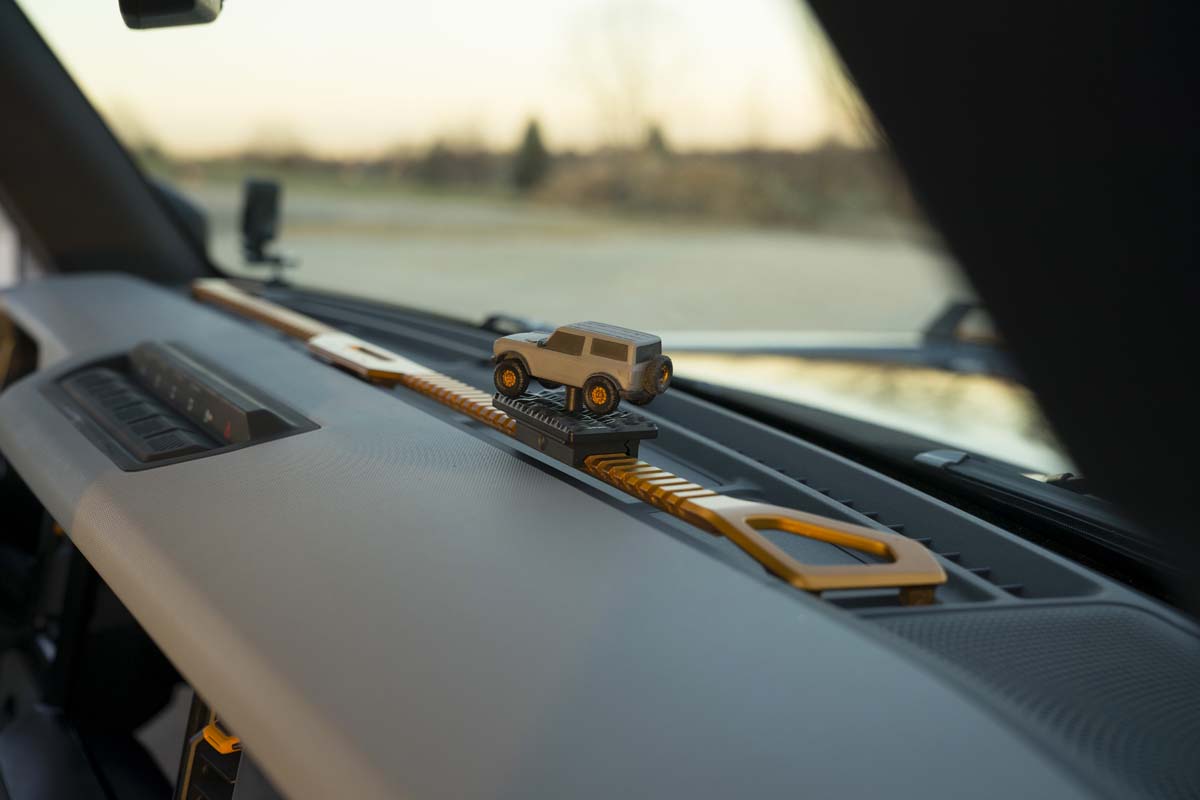 “This passionate, die-hard audience with an appetite for our Ford brand is vital to us.”

Day One saw each custom build unveiled in the “ultimate Ford garage,” while Day Two took a deeper dive into each build’s features and technical details, supported by Q & As with Ford designers, engineers and drivers.

While the Badlands is an existing grade of the Bronco and the Sasquatch accessory package adds off-road-specific parts, the two have been combined to distinctive effect with this concept.

From this base, the concept was built. The idea was to show the Bronco’s versatility as a comfortable weekday drive that can be turned into an off-road weapon on the weekends, then back to stock spec for the working week, using a selection of bolt-on parts.

Starting with the running gear, the Badlands’ standard 2.3 EcoBoost and 7-speed have been upgraded to the optional 2.7-litre EcoBoost V6 petrol engine and 10-speed automatic (which is seen locally on the premium Ranger variants). 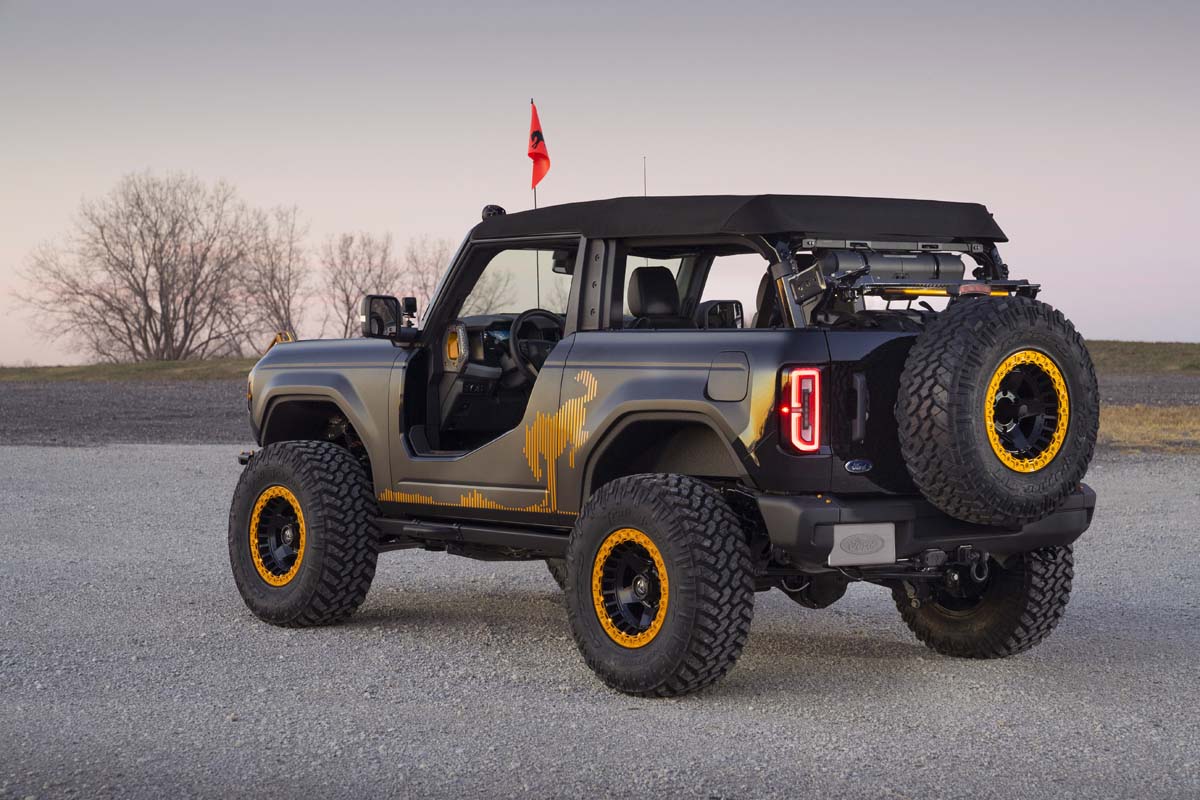 The exterior is where the Ford Accessories and custom parts come into play, starting with the heavy-duty modular front bumper that’s been customised to fit a Warn Xenon 10S winch.

The stock grille has also been modified, as has the rear bumper, while the doors are replaced with cut-down half-doors inspired by what was offered on the original 1960s Bronco.

The stock front guards and rear quarter panels have been replaced with ‘Weekender’ front and rear items from the Ford Accessories catalogue. Made from impact-resistant materials, these bolt-on panels are designed for off-road use, with an angular wheelarch opening and the wheelarch flares deleted. The result is a more aggressive look, especially when paired with the radical wheel and tyre combo on the concept.

The trail sights on the leading edge of the front guards are bespoke units, in the style of the factory items, but larger and 3D printed from titanium. The rock sliders are factory, but have been modified, with a bolt-on step added for easy entry.

A pair of Rigid Industries LED spotlights have been fitted to the factory mounts atop the Bronco’s windscreen, with a GoPro Max camera mounted to the factory bracket on the nearside exterior mirror. There’s also a Bronco-branded sand flag, fixed to the front bumper with a custom bracket.

At the rear, a HiLift jack is mounted to the Bronco’s factory roll cage, which has been exposed by cutting away the sides of the Bestop soft top.

Paint on the Bronco Badlands Sasquatch 2-door Concept is a mix of gloss and satin black, with the finishing touch being the custom ‘soundwave’ graphic that runs down each flank. The graphic’s gold finish is picked up on the beadlocks of the Warp rims, as well as the trial sights, bolts and other detail parts.

For non-stop tunes on the trail, a JBL soundbar is mounted to the rear roll bar, while an off-road assistance kit, first aid kit and premium organiser kit from DC Safety have been stowed at the rear. The soundbar and all the kits are available from the Ford Accessories catalogue.

A Marmot tent and duffle bag for gear, as well as a fire extinguisher, have also been stowed behind the rear seats.

With the stock Bronco Badlands dash, steering wheel and seats retained, the remaining interior changes are minor, including a customized BYOD (bring your own device) bar that allows all manner of smartphones, satnavs and cameras to be mounted and, like the bolt heads for the grab handles, is finished in the same gold as the wheel rims.

Like the trail sights, those grab handles are 3D printed out of titanium and carry Bronco branding and distinctive slots.

Ford says all the bolt-on parts in the Ford Accessories and Performance Parts catalogue can turn a stock Bronco Badlands into something like the Sasquatch 2-door Concept in a couple of hours.

Unfortunately, the Bronco remains a non-starter for Australia, which makes cool customised versions like this all the more of a tease!