Jeep loads up a Gladiator with Jeep Performance Parts, aftermarket products and custom touches to create the the Top Dog concept.

In recent years, Jeep has spoiled us with a string of concept and custom off-roaders that were presented at the Moab Easter Jeep Safari, SEMA aftermarket industry show and other events. Things changed in 2020, of course, with COVID-19 seeing many of these events either cancelled or moved to online-only affairs.

Despite fewer opportunities to present their concepts and customs last year, Jeep didn’t abandon the practice entirely and the ‘Top Dog’ concept is evidence of that.

Based on the Gladiator dual cab ute, the Top Dog isn’t a bespoke build like some previous vehicles. Rather, it’s a showcase of aftermarket goodies from Mopar and the Jeep Performance Parts (JPP) brand, including products currently available and future additions to the range that are presented in “concept” form on the Top Dog. 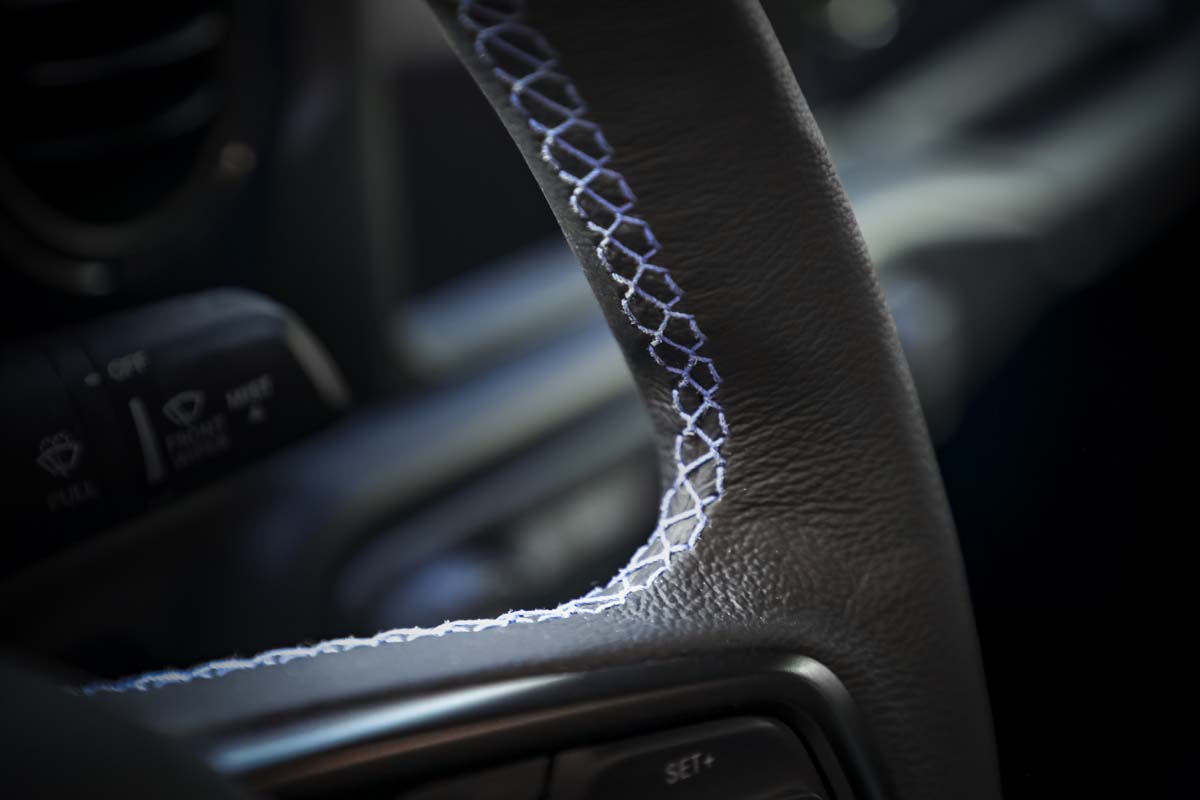 Those 20 parts represent just a fraction of the Mopar and JPP range, with more than 500 different parts and accessories available.

The Gladiator Top Dog concept is finished in appropriately-named ‘K-9 Blue’ paint, but the feature that captures immediate attention – at least for an Aussie audience - is the rear storage system.

Replacing the standard Gladiator’s ute tub, the tray/canopy unit is from Australia’s Patriot Campers and specifically their PCOR (Patriot Campers Off Road) range. 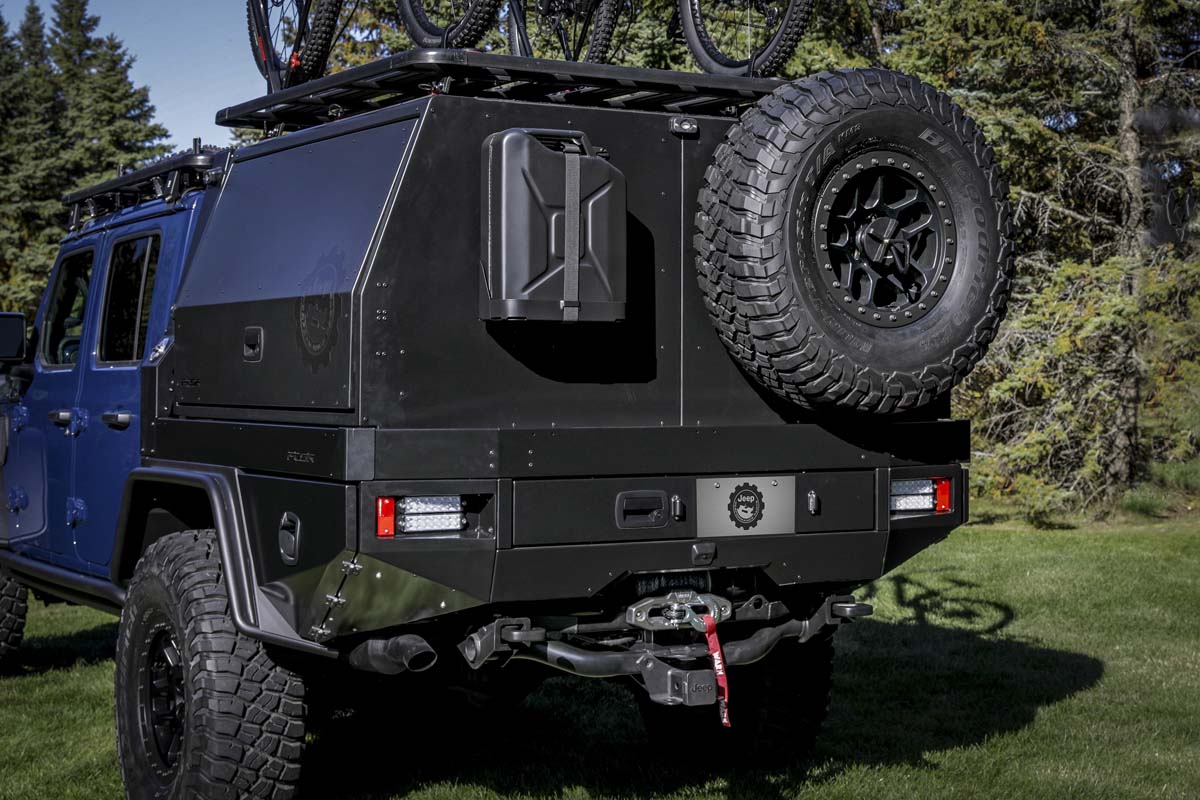 Made from lightweight aluminium with a hard-wearing finish, this ‘3/4 canopy’ comes with a 1000W inverter, dual 160AH batteries, internal and external LED lighting, integral water and fuel tanks, as well as gas-assisted doors with dust seals and compression latch handles in its standard form. 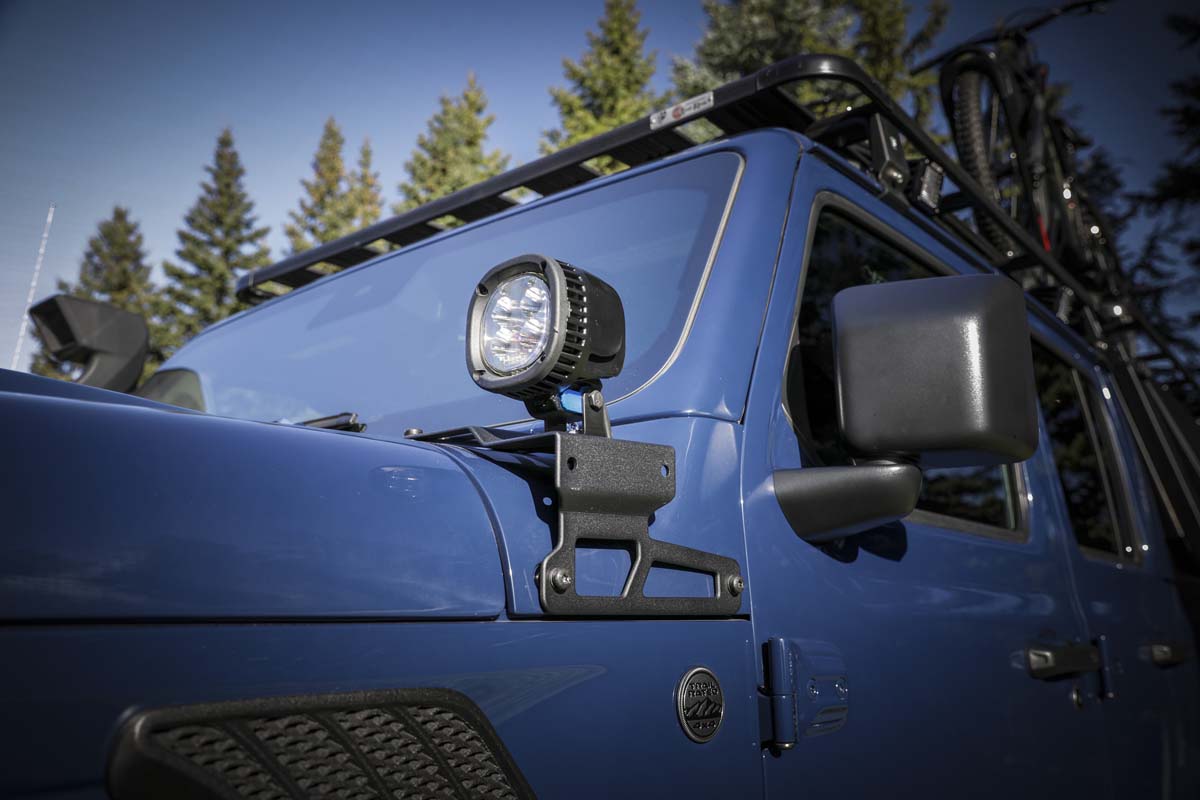 Another cool standard feature is that the canopy doors can be linked to a vehicle’s central locking system, so when your 4x4 is locked, so is the PCOR canopy.

On the Top Dog, the 3/4 canopy has been customised, so while it features the slide-out tray, open storage space and the usual switchgear and auxiliary power outlets on the offside, there’s a built-in fridge and hot-dog grill on the nearside, with the latter carrying a false front that makes it look like a Snap-On toolbox! 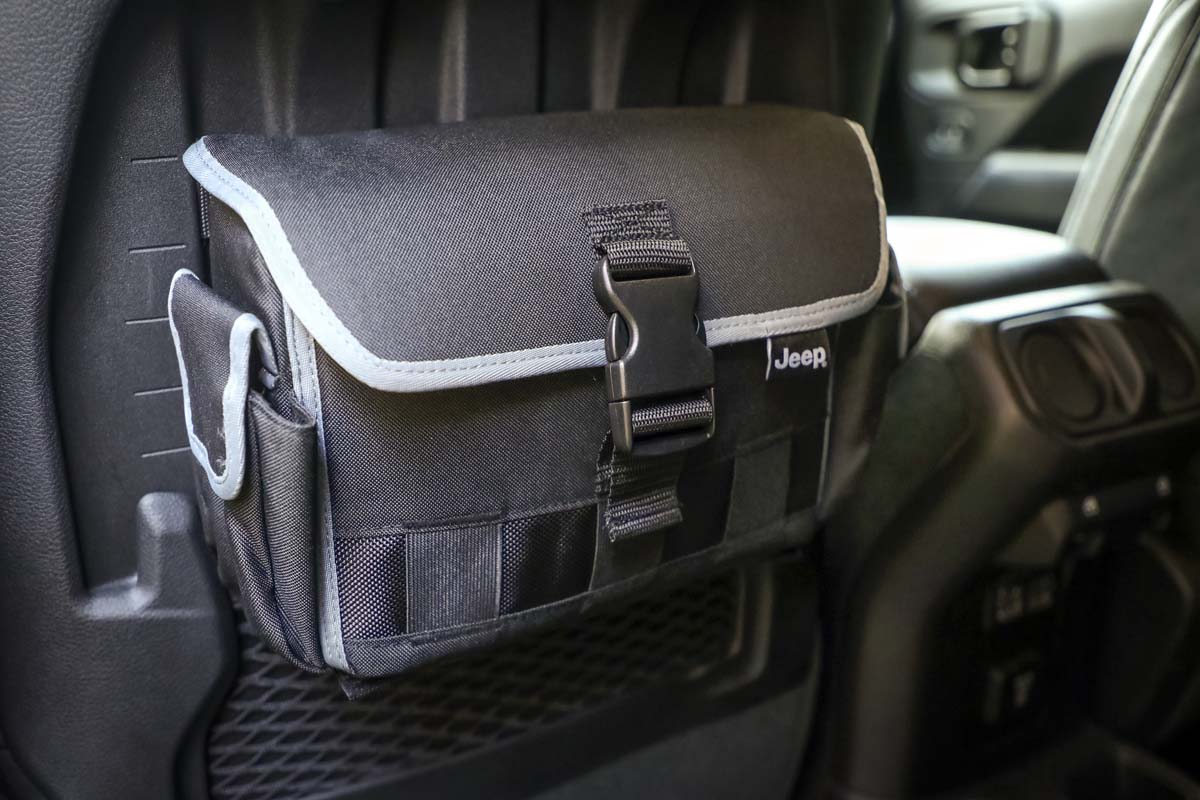 Further storage options integrated into the PCOR 3/4 canopy include a jerrycan and spare wheel mount at the rear, storage bins aft of the rear wheelarches and a slide-out rear tray that carries a folding ladder to access the roof racks and is also ideal for holding ropes and recovery gear.

To carry the mountain bikes and additional kit, there are a pair of K9 roof racks from Eezi-Awn added to both the Gladiator cabin’s removable 3-piece hardtop and the PCOR canopy.

These units, which are currently available in the US to suit the Gladiator, are made from extruded aluminium with fully-welded joints and a black powder coated finish.

Claimed to be a revolutionary advancement in roof rack design and construction, the K9 rack is only 1 3/8-inch high and claims to be lighter, more functional and more durable than a comparable rack. These racks are also compatible with Thule and Yakima sports mounts for bikes, kayaks and other equipment. 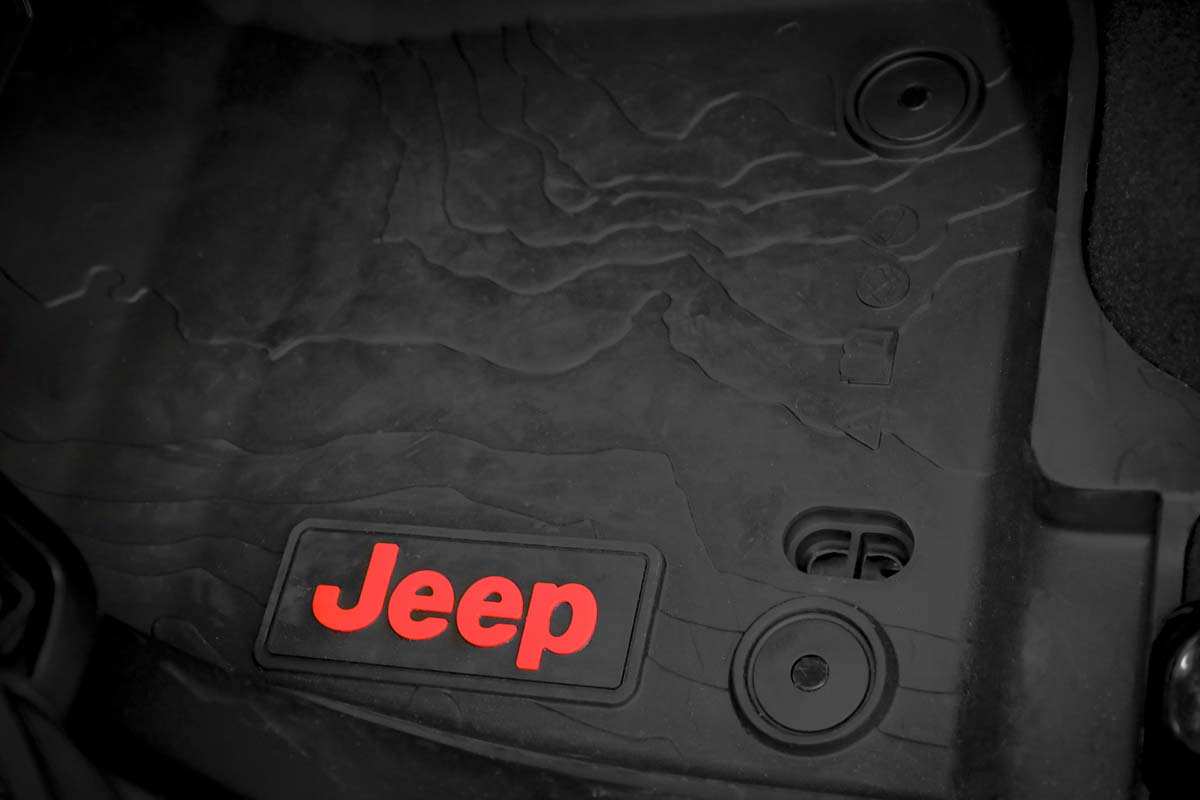 As applied to the Top Dog, the Eezi-Awn rack above the cabin can carry recovery gear - with space to spare - and also features underslung concept task lights. Its sister unit above the canopy adds dual Yakima bike racks to hold the pair of Trek mountain bikes (which look like Fuel EX models – can any Trek aficionados confirm?).

Enhancing the Gladiator’s Trail Rated status and ensuring you can drive to those remote mountain biking trails, the Top Dog concept adds a JPP two-inch lift kit with FOX shocks, while the ride height is further enhanced with a set of 17-inch JPP beadlock-capable alloy wheels and 37-inch BF Goodrich KM3 mud-terrain tyres.

To suit this package, a set of concept “high top” steel wheelarch flares have also been fitted.

At the front end, there’s a JPP Rubicon bumper that mounts a JPP 8,000lb Rubicon Warn winch with 100ft of Spydura synthetic rope. 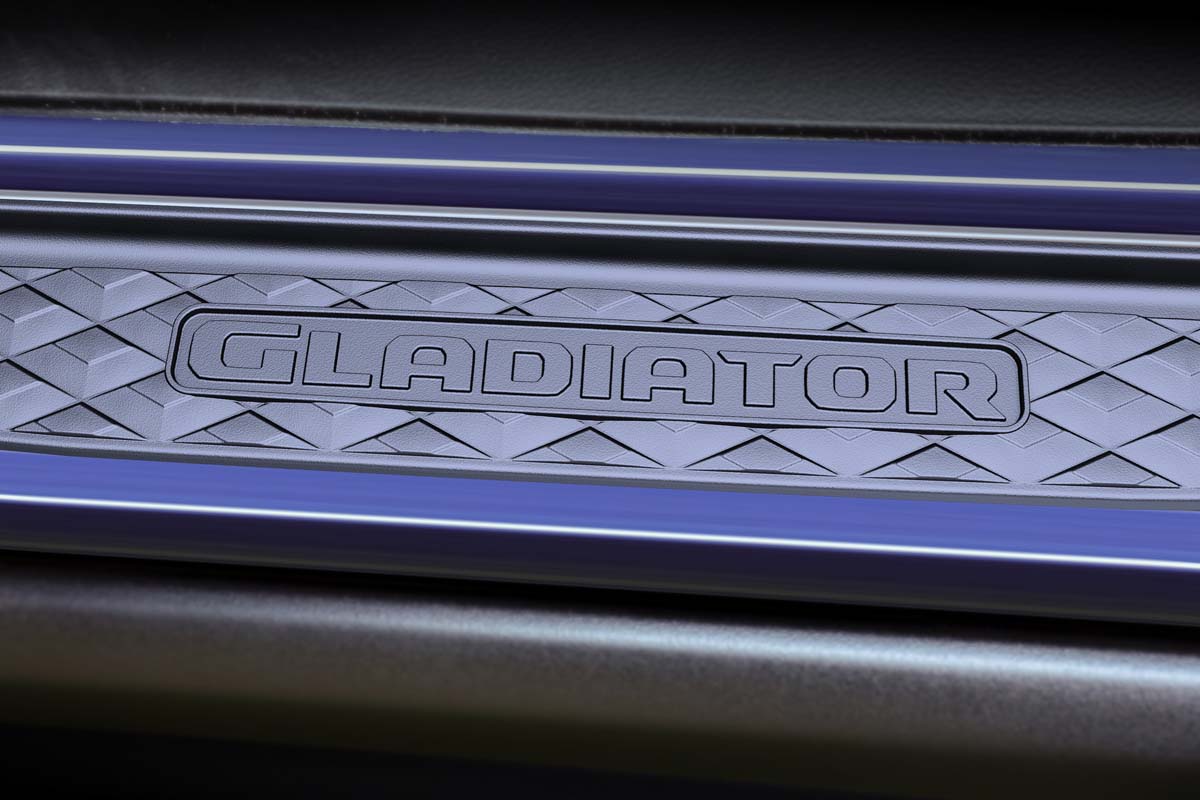 Aft of the bumper, there’s a concept bonnet with Mopar latches, a JPP snorkel and JPP five-inch auxiliary LED lights on the A-pillar.

Inspired by the concept grille guard, the JPP rock rails have been modified with beefy two-inch steel tubes, while an additional JPP Warn winch has been fitted to the rear bumper.

Moving to the Top Dog’s interior, K-9 Blue paint features on the dash and is complemented by blue stitching on the seats, armrests, shifter boots and steering wheel that are all trimmed in black Katzkin leather. 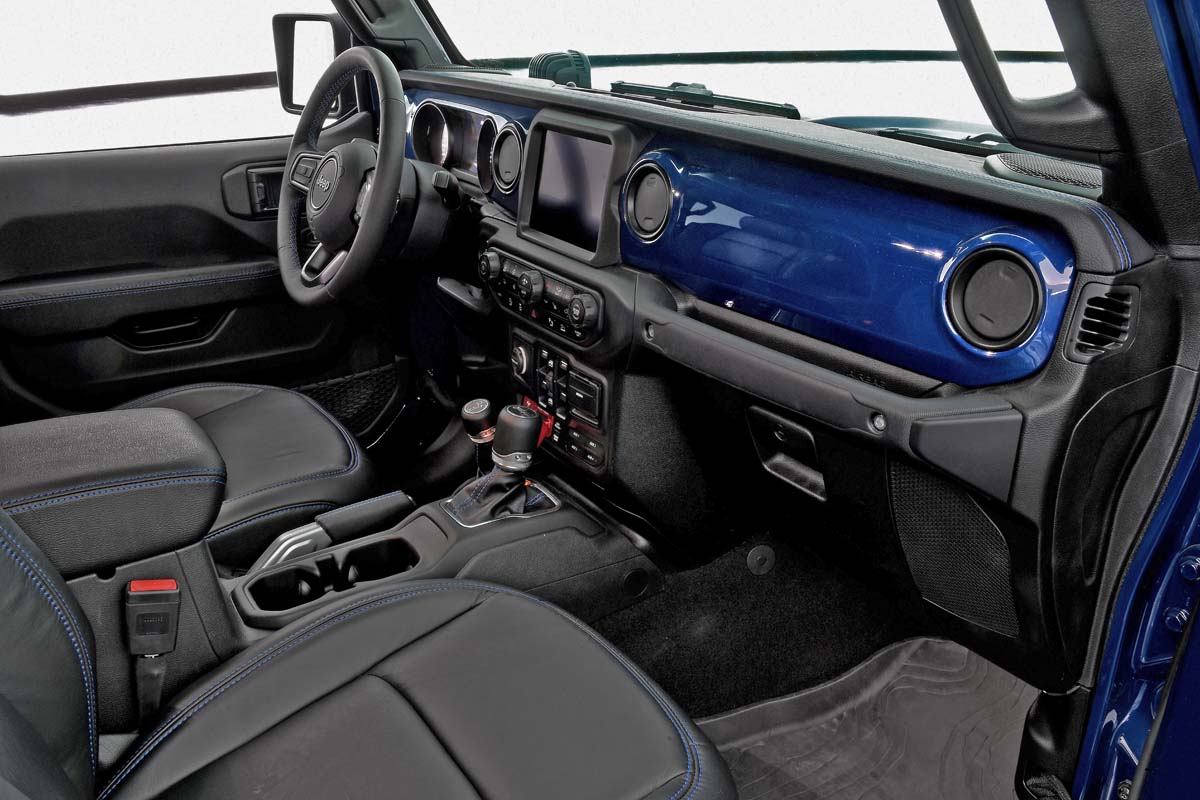 Mopar all-weather floor mats are fitted front and rear, while other JPP goodies, like grab handles and storage bags, complete the interior.

Concept parts and unique paint aside, the Top Dog concept could feasibly be replicated by an enthusiastic Gladiator owner, at least in the US.

The Gladiator model this concept is built on is unchanged mechanically, so that means a 3.6-litre Pentastar V6 petrol engine producing 212kW and 352Nm, matched to an eight-speed Torqueflite automatic transmission.

“Built to handle the demands of an active lifestyle and offering one-of-a-kind open-air freedom, Jeep Gladiator is the perfect canvas for Mopar to push the envelope even further with the addition of an array of Jeep Performance Parts,” said Jim Morrison, Head of Jeep Brand – FCA North America.