A well-known name in the 4x4 parts and aftermarket industry set a record in a homemade EV Sierra.

A few years back, a pair of Suzuki Sierras converted to electric power set a Guinness World Record for crossing the Simpson Desert. Now, one of those groundbreaking EV 4x4s is for sale. 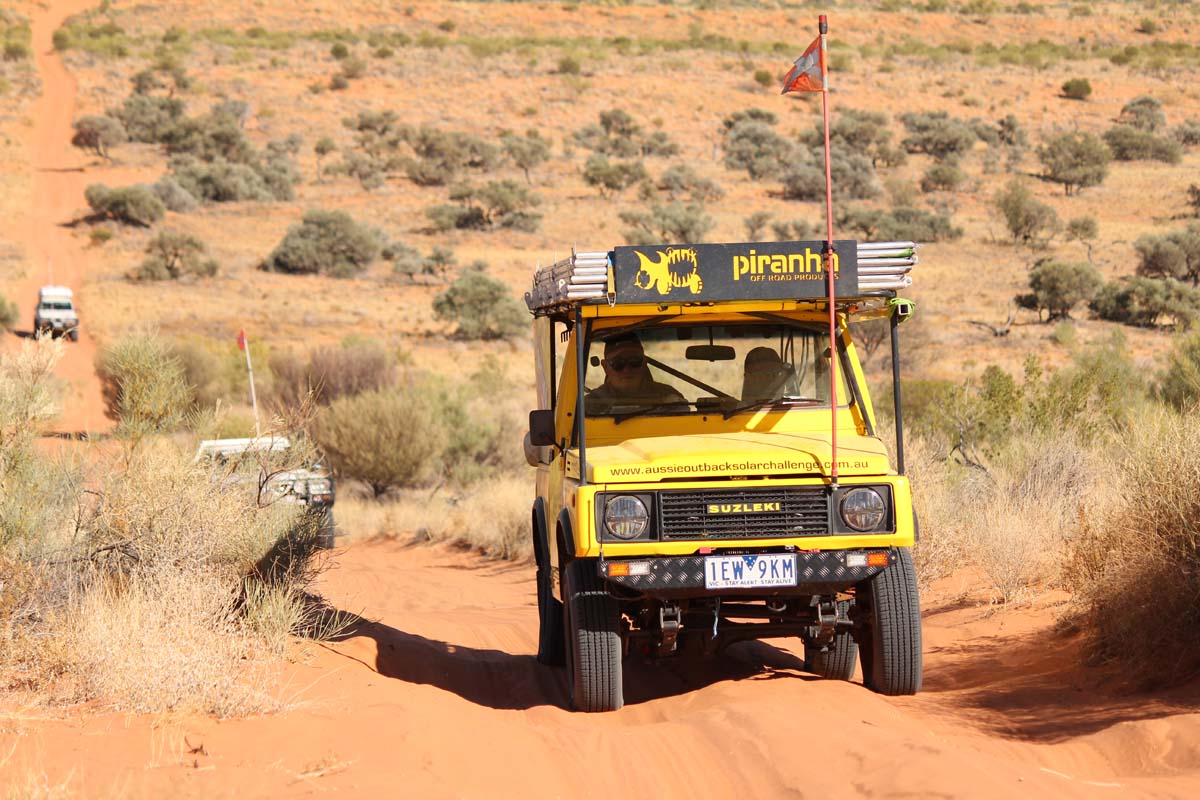 For a lot of four-wheel drive aficionados, Alan Johnson needs no introduction. Some know him from Piranha Off-Road Products, while others will connect him to Seriously Suzi, where his expertise with the Suzuki Sierra, Jimny and Vitara made him the go-go guy for anyone looking for parts and upgrades to suit those models.

He’s semi-retired now, but almost a decade ago, Alan decided to put his skills and knowledge to the test with the creation of an electric 4x4.

Naturally, the basis for Alan’s first ever EV would be a Suzuki, specifically a 1996-model Sierra SJ50, which was purchased specifically for the project.

EV across the Simpson

The goal was to use the electric Sierra to set a Guinness World Record for an EV crossing of the Simpson Desert. After a bit of to and fro with the people at Guinness, they agreed to recognise the crossing, as long as certain strict criteria were met, including completion of the approximately 400km trek within eight days.

Joining Alan on this adventure would be Mark French of Mark’s 4WD Adaptors, who would use a Sierra as the basis for his EV, too, but take a high-tech approach, including the use of lithium-ion batteries and an advanced motor.

Mark’s wife, Denny, would serve as his co-driver, while Alan would be partnered by his son, Michael.

After removing the Sierra’s 1.3-litre engine, five-speed transmission and as much surplus weight as possible, the EV conversion started with the acquisition of a forklift motor.

Being an EV novice, Alan selected the biggest, newest-looking motor he could find at a forklift wrecker. Once installed and fired up, this motor propelled the Sierra backwards at an alarming rate, and it was only after the same thing happened when the polarity was reversed that Alan realised he’d selected a lift motor, which only spins in one direction, unlike an electric forklift’s drive motor.

With a drive motor installed, batteries were next. Four 12-volt lead-acid batteries were fitted, charged by a bank of 3.6kW solar panels. These had to be carried on the vehicle and set-up by the vehicle occupants as part of the crossing record being recognised by Guinness. 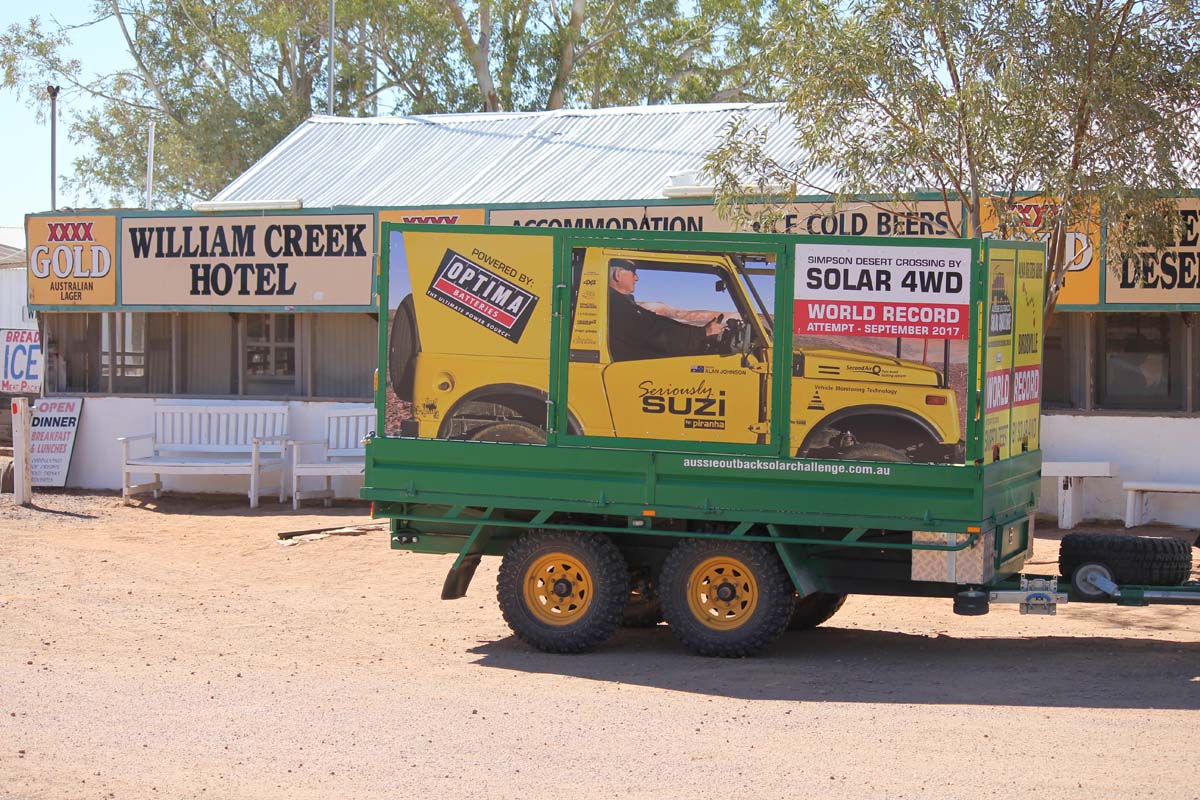 Alan/Michael and Mark/Denny would also have to do all their own mechanical repairs and meticulously log their progress via GPS.

With the EV drivetrain sorted, other modifications to Alan’s Sierra included revamped suspension that was both stronger and had more travel, while the factory steel wheels were fitted with beadlocks to handle the low tyre pressures that would be a constant across the desert.

A first attempt to cross the Simpson in 2015 failed due to overcast conditions and rain, but it also showed that range was meagre. Even with four batteries, the amount of stops needed to recharge the batteries would have made completion of the crossing within eight days unlikely.

Four more batteries were added, then another four for a total of twelve, providing driving range of around an hour in optimal conditions before recharging was required.

Ahead of a new attempt at the world record, two years after the first, Optima came on board to supply a fresh set of batteries and also lent their backing to the project.

In September, 2017, Alan and Michael, along with Mark, Denny and a support team made up of wives and friends, towed their Sierra EVs to Oodnadatta in SA.

The jumping off point for the Guinness World Record attempt on the Simpson Desert would be Alka Seltzer Bore, 100km north of Oodnadatta. From there, the two Sierra EVs faced almost 400km and more than 1100 sand dunes before they reached the finish point on the other side of the Simpson at Birdsville. Obviously, these conditions would push the capabilities of the EVs, especially Alan’s low-tech example, to the limit.

The time of year and direction of travel (west to east) was chosen to maximise sunshine and minimise heat, ensuring the best chance of completing the crossing. An obstacle that became apparent only when the adventure got underway was traffic on the one-lane paths through the dunes, requiring the lead support vehicle to advise the following EVs of oncoming 4x4s.

After three days, Mark’s more advanced EV set up was proving its mettle and moving ahead, leaving Alan to focus on the consolation prize of the first EV with lead-acid batteries to cross the Simpson.

Mark rolled into Birdsville after four days, 21 hours and 23 minutes, while Alan, delayed by a severe dust storm and searing heat that threatened to cook the electric motor, arrived after seven days, five hours and six minutes – within the timeframe Guinness required for the world record.

The magnitude of what Alan and Mark achieved was made apparent when a high-tech, big budget German attempt to cross the Simpson in EVs in 2019 failed.

Since successfully crossing the Simpson Desert in his groundbreaking Sierra EV almost five years ago, Alan’s now offering it for sale to fund a new EV project.

On non-transferable Victorian club registration, all the Sierra’s electric componentry is still in place, as are elements like the suspension upgrades and beadlock wheels. The only items the next owner would need to add would be new batteries.

Structural damage incurred in the Simpson crossing has been repaired, but Alan chose to leave the vehicle’s cosmetic damage untouched, as the battle scars are part of its story.

With this Sierra being a piece of Australian motoring history, and a labour of love for Alan personally, he would like to see it go to a knowledgeable EV enthusiast or a museum that will preserve it in the condition shown here.

In parts alone, creating this EV cost over $55,000, with the labour cost immeasurable, but Alan will consider a sensible offer from the right person who can give this very special 4x4 a new home.

For more details, see the advert in this issue.