This well-travelled Land Rover Defender has a connection to one of world’s toughest off-road events.

Why would you buy a Defender that’s travelled more than 170,000 kilometres, has rust, is damaged and on its third gearbox? Because it was in the Camel Trophy, that’s why!

For almost two decades, the Camel Trophy was the toughest off-road adventure on the planet. Combining endurance, driving skill, navigation and teamwork, the Camel Trophy was a big deal in its heyday and Land Rover was a part of it for all but its first and final year, with their distinctive yellow vehicles becoming synonymous with the event.

As a test of 4x4 driving skill, the Camel Trophy was the ideal forum for Land Rover to demonstrate the capabilities of their vehicles, so it’s little surprise they came on board following the publicity generated by the first event that had been created as a promotional opportunity for Camel cigarettes. 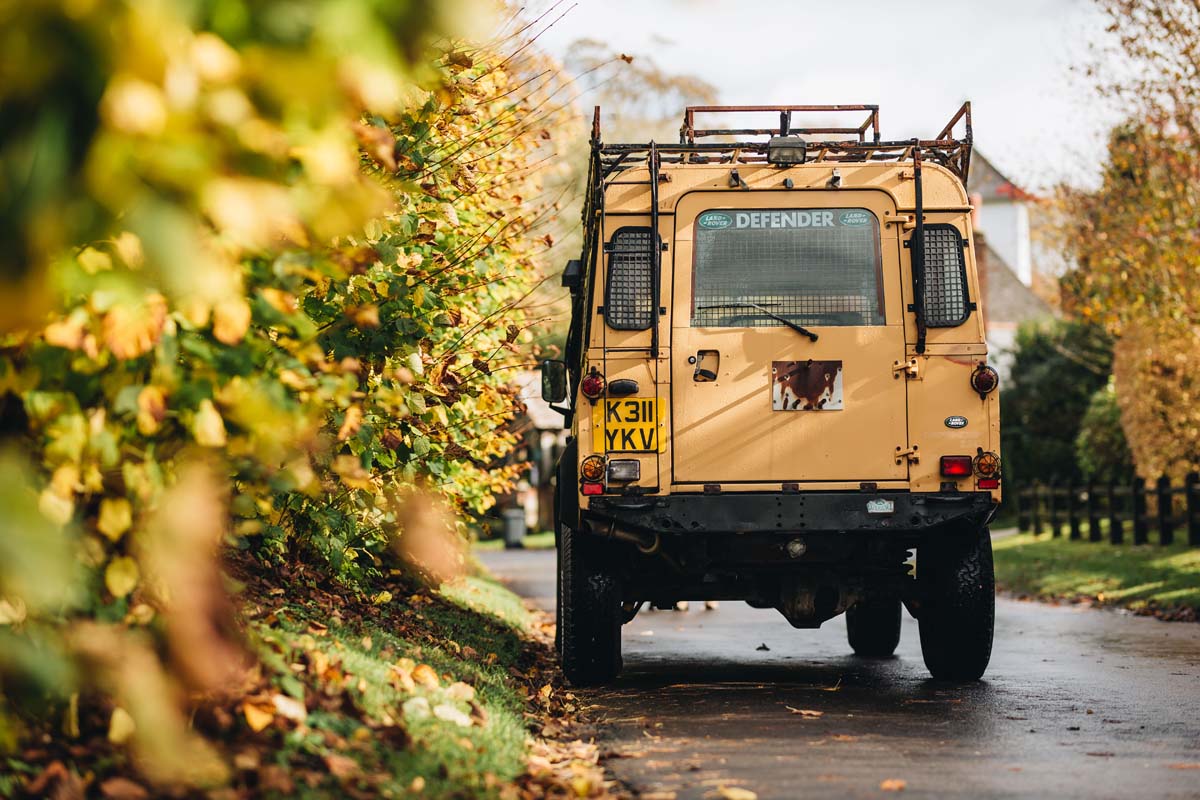 Land Rover’s initial involvement in the Camel Trophy, in 1981, saw them provide the five teams entered with new Range Rovers to tackle 1,600kms of jungle on the Indonesian island of Sumatra. While specially prepared with winches, bullbars, spotlights and other gear, the Range Rovers differed little from factory specification mechanically and were all finished in Sandglow Yellow paint that would become a signature colour for Land Rovers in the event thereafter.

Following another year with Range Rover, the Series III, 90 and 110 Land Rovers were used as the Camel Trophy competitor vehicles, then the Discovery in 200 tdi and 300 tdi form, and, finally, the Freelander on the penultimate Camel Trophy from 1998.

As well the competitor vehicles, Land Rover also supplied the fleet of support vehicles for course control, medical and media personnel, the latter being a major part of the event. These vehicles traversed the same route as the competitors, so had to be similarly prepared and just as durable. 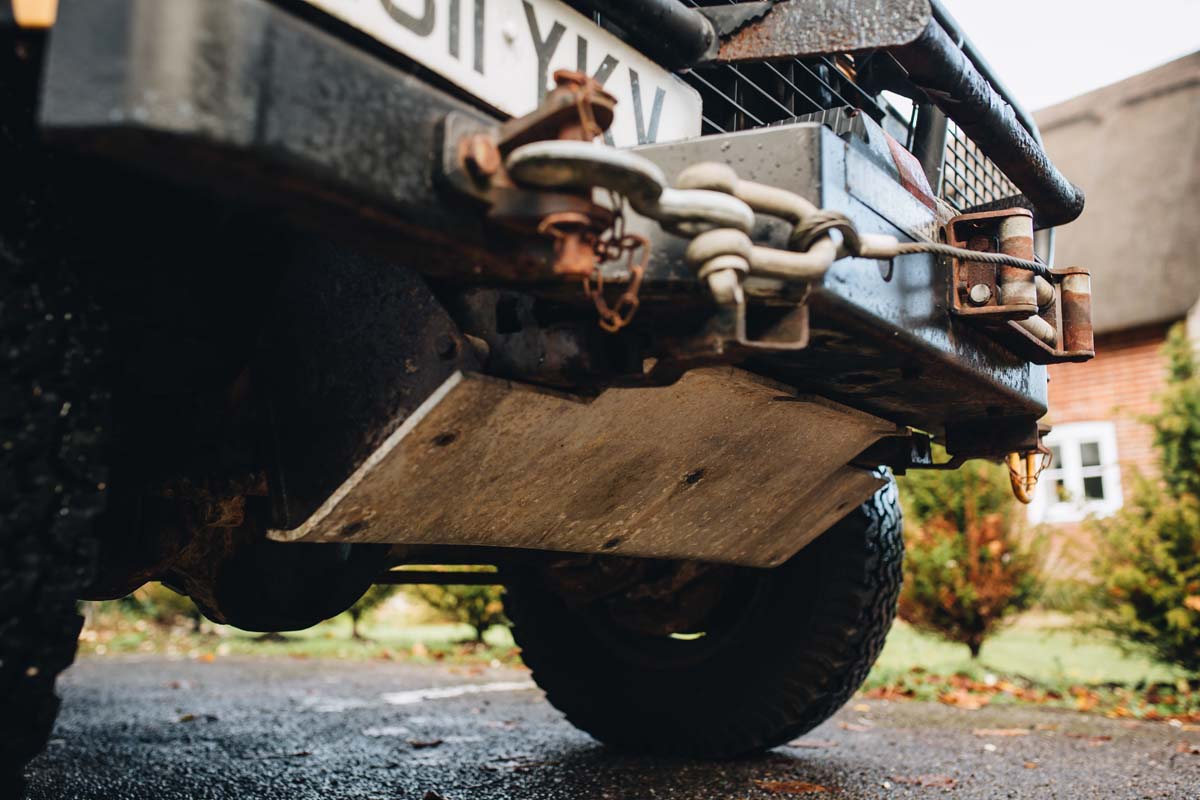 Over its first decade, the Camel Trophy was held in Africa, Brazil, Indonesia, Madagascar and even Australia.

In 1990, the Camel Trophy broke new ground, being the first international motorsport event held in the Soviet Union. That year also saw Defender 110s serve as support vehicles for the first time and they would continue in this role until Land Rover ended their involvement in 1998.

For 1992, the Camel Trophy was held in the South American country of Guyana (formerly British Guiana) with 102 entrants, representing 16 countries, in a fleet of 30 vehicles.

By this stage, the event had evolved beyond a point-to-point endurance adventure to include a series of 'special tasks' to test the crew's 4x4 driving skills, with a trophy for this section of the event.

Starting in Manaus, Brazil, the 1992 Camel Trophy convoy headed north on a 1600km trek to the Guyanan capital of Georgetown. After crossing the Takutu River that formed the Brazil-Guyana border, competitors encountered the variety of environments that characterized the country, from dense rainforests to open savannah and sandy plains.

To maximise the challenge of travelling through deep, clinging mud, previous Camel Trophies in tropical areas had been scheduled for the wet season, but the wet was late in coming to Guyana that year.

It was not entirely dry, though, with competitors required to undertake numerous river crossings, including some that were deep enough to necessitate the vehicles being ferried across individually by dinghy. It wasn’t until Day 7 that the sort of wet, muddy jungle trails the organisers had hoped for were encountered. These continued, off and on, through much of the rest of the trek.

A non-vehicle element was added to the 1992 event in the form of an overnight hike to Kaieteur Falls, the largest single-drop waterfall in the world, that all entrants had to complete on foot. 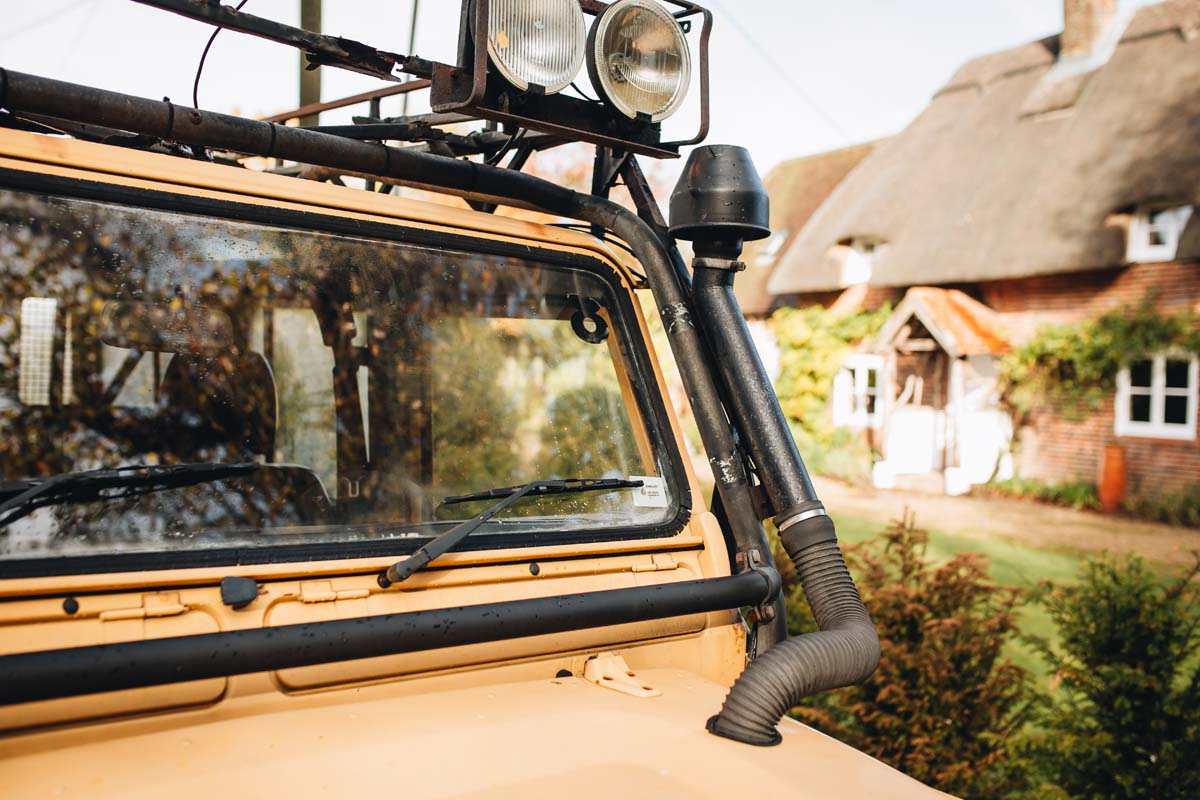 The Land Rover Defender pictured was one of the support vehicles on that ’92 Camel Trophy, and given the punishment meted out (look for footage on YouTube), it’s amazing it has survived.

As if that wasn’t enough, this vehicle is described as having travelled from the UK to India and back on three occasions – a round trip of around 45,000km – since its adventures in Guyana.

While it retains a mostly standard C1992 Defender mechanical specification, with a 2.5-litre four-cylinder diesel engine (mostly likely 80kW and 255Nm), five-speed manual transmission, four-wheel drive and two-speed transfer case, the fitout of this vehicle reflects the additional preparation undertaken in-house by Land Rover - in what was the forerunner of their Special Vehicle Operations division - for the Camel Trophy. 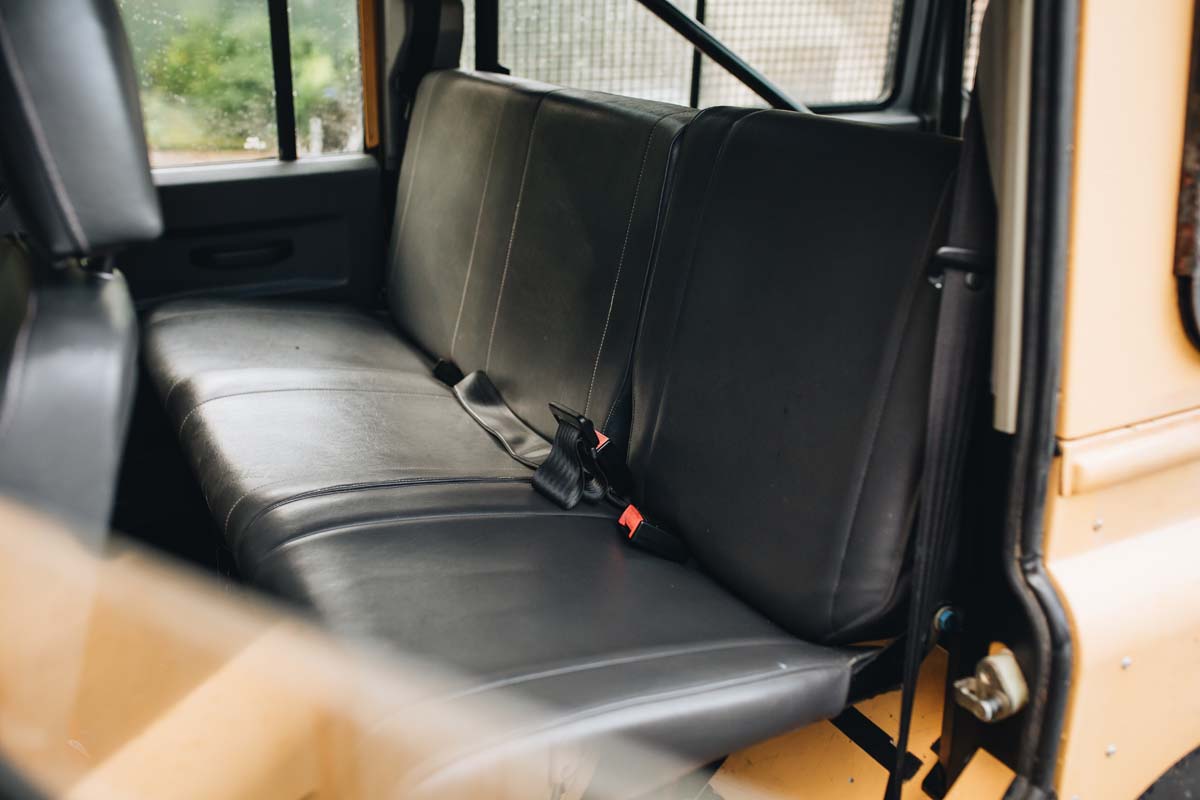 Those extras and updates include dual batteries, dual fuel tanks, winch, snorkel, roof rack and an outside-inside roll cage. The latter was a particularly necessary feature, as proven by past Camel Trophy events that saw vehicles tipped on their side and even doing full 360 rollovers in uneven terrain.

Underbody protection, a bullbar, spotlights, and protective mesh on the cargo area windows were other features fitted to this vehicle.

Beyond its Camel Trophy history and multiple overland treks to India, much of this vehicle’s history is unknown, but it carried British registration and its odometer listed 110,200 miles when it was consigned for Bonhams ‘MPH’ online auction in the UK this past December.

The consignor, the vehicle’s third owner who’s had it for 22 years, did reveal the 1992 Land Rover Defender 110 was on its third gearbox, but runs and drives well. Rust and damage is evident on the images presented, but that’s hardly surprising given this vehicle’s history. 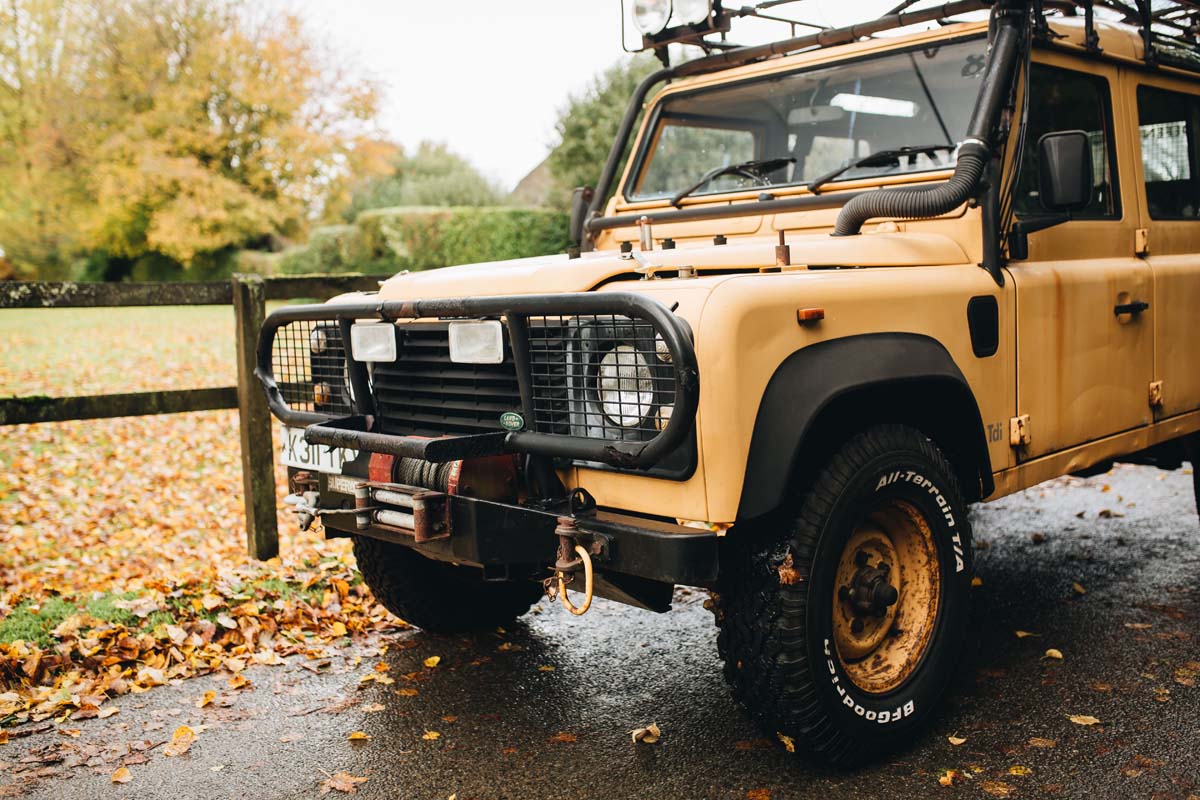 A pre-auction “score” rating the vehicle’s exterior, interior, engine, running gear and electrical condition was 51 out of a possible 100 – not great! – with most individual elements under those criteria only being regarded as either average or good.

This past February, Land Rover released the ‘Defender Works V8 Trophy’ (see HERE), a limited edition Defender painted and finished in the style of those original Camel Trophy Land Rovers.

Had the consignor waited a few more months, he may have benefitted from the buzz created by the Defender Works V8 Trophy and got a few more dollars for his original example.

Regardless, this vehicle survives as a reminder of the epic off-road competition that was the Camel Trophy. Here’s hoping it’s got more miles and more adventures in its future.

Thanks for Bonhams for assistance in compiling this article.