While it’s one of the 25 ‘Reborn’ Land Rover Series I 4x4s, this example is one of a kind.

Photos: Copyright and Courtesy of Bonhams

When Land Rover announced their ‘Reborn’ programme, they created a new demand for the classic Series I Land Rover, for not only would these decades-old 4x4s be remade in as-new condition, they’d be remade at the same factory where they were first created. 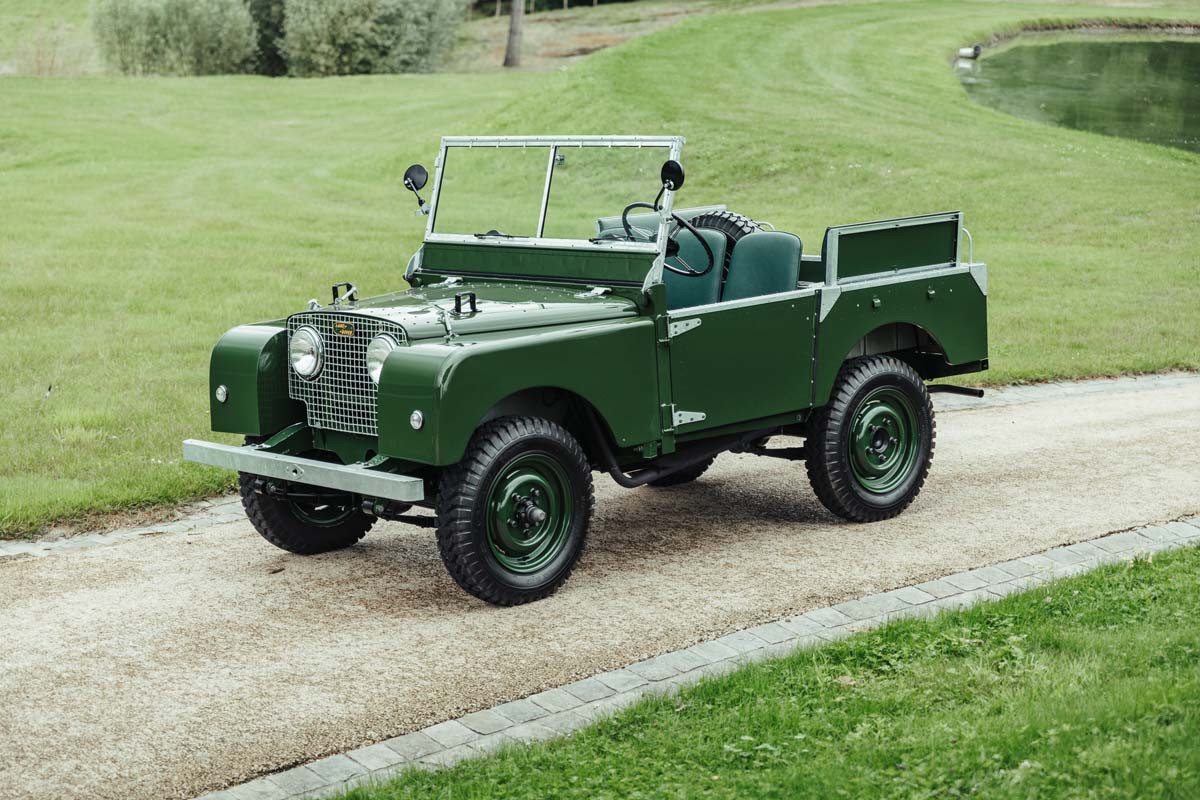 The Reborn programme was launched in 2016, just weeks after the last Defender (the original model, not the modern retake) was built. The idea behind the programme was not only to retain interest in classic Land Rovers while the new Defender was being developed, but also to demonstrate the talents of Land Rover Classic (aka JLR Classic), the heritage arm of Jaguar Land Rover.

Using skilled in-house craftspeople, Reborn would combine period restoration techniques, materials and equipment with modern R&D and manufacturing expertise. The objective was to make each restoration as authentic to an original Land Rover and use as much of the donor vehicle as possible, then offer these factory-rebuilt classics for sale.

The initial focus of Reborn was on the classic Series I Land Rover, with only 25 units to be produced, reflecting the 25 pre-production vehicles that had been built before the Land Rover’s official launch in 1948.

With over 200,000 Series I Land Rovers built from late 1947 until the arrival of the Series II in 1958, you may think that Land Rover had a broad pool to chose from when selecting candidates for Reborn, but that wasn’t the case. 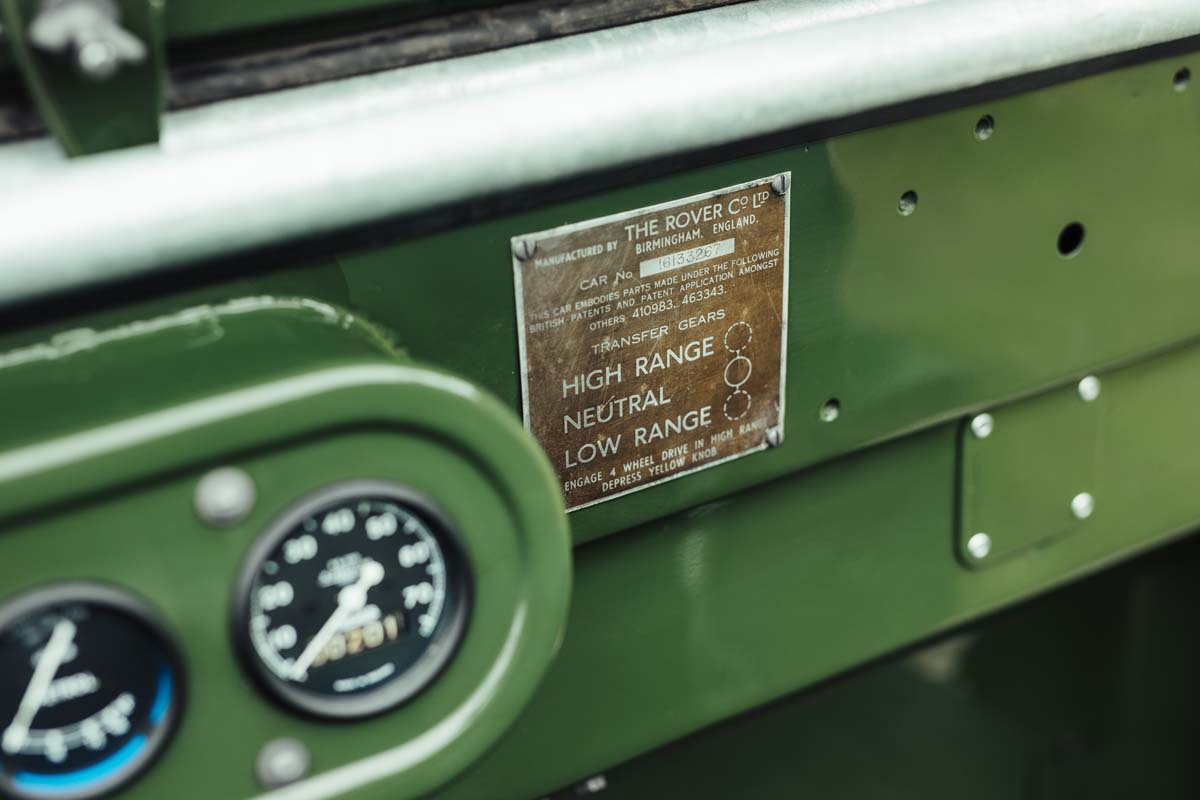 The hard life that most early Land Rovers led mean that few survive in original, unrestored and unmodified condition. There are restored examples, of course, but selecting one of those would have defeated the purpose of the whole Reborn programme. What was needed was an unrestored, mostly original and mostly complete Series I.

Land Rover Classic set down some criteria for donors to meet Reborn eligibility, including that, even if it wasn’t complete, at least 80 per cent of the vehicle had to be considered restorable.

A team from Land Rover Classic would assess potential vehicles, including ones they sourced themselves and others submitted by customers, drawing upon decades of experience to hand-pick each vehicle for the programme. 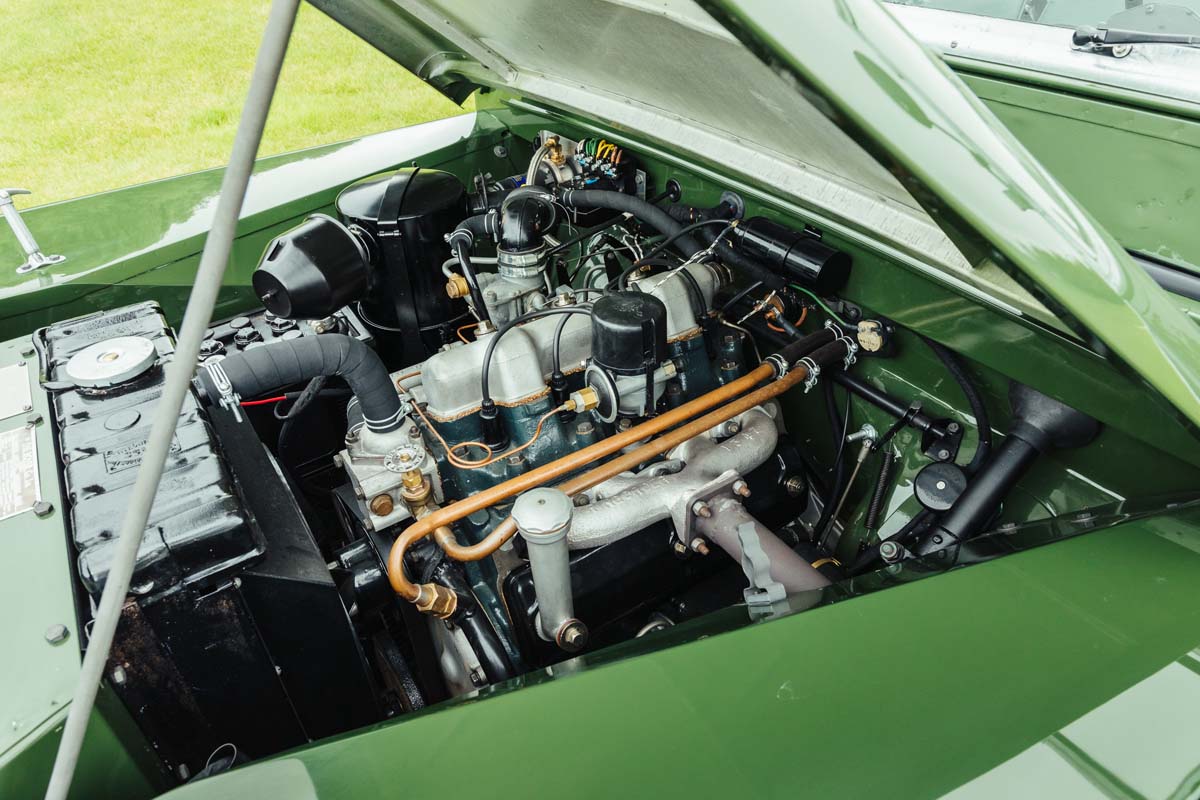 Once selected, each Series I would then undergo a full restoration, with specifications and components dictated by the original factory specification, using parts developed and produced by Land Rover Classic Parts to preserve authenticity.

The authenticity in parts and components extended to the choice of five period colours offered - Light Green, Bronze Green, RAF Blue, Dove Grey and Poppy Red. These were all ‘army surplus’ finishes that were the only colours available in the Land Rover’s early years. 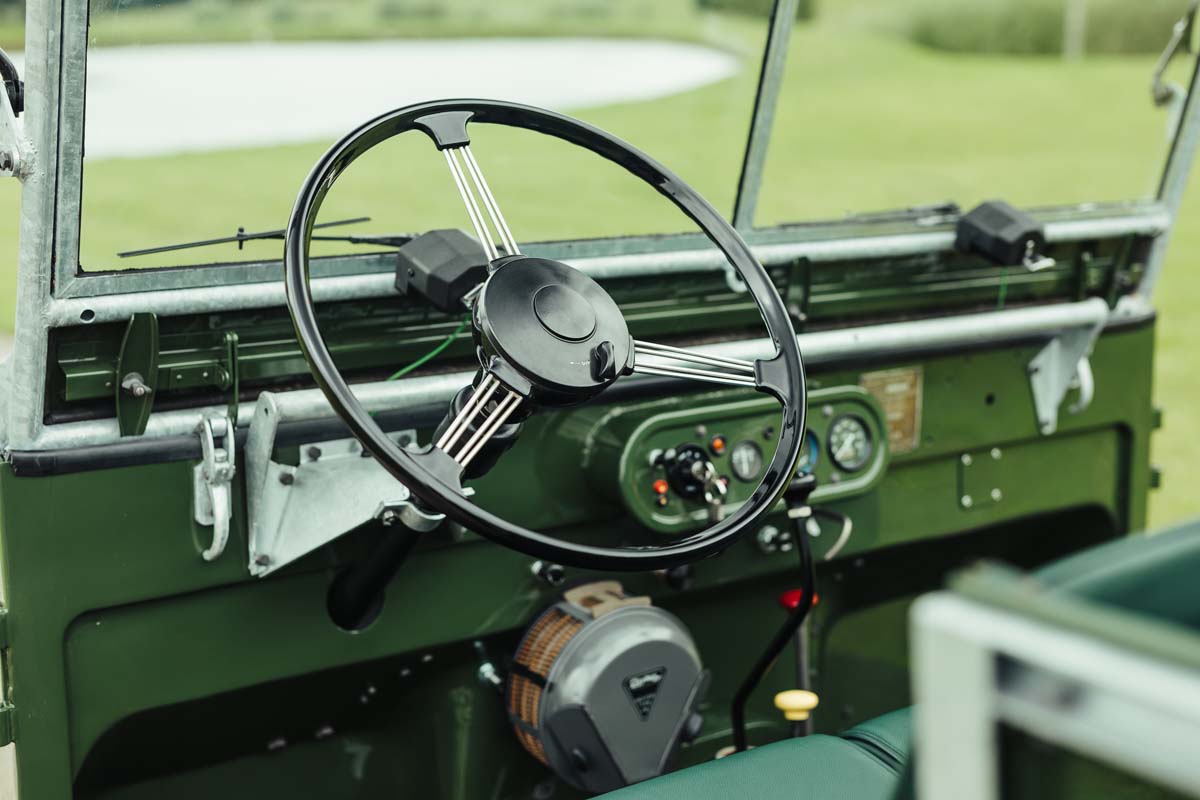 Once the restoration was finished, Land Rover Classic’s audit team would then assess the vehicle again before approving it for sale.

Depending on the condition and specification of the base unit, it was estimated that each Reborn restoration cost between £60,000 and £80,000 (AU$85,000 - AU$115,000 approx.), minus the price of the donor vehicle. This was generally much more expensive than a Series I restoration from any existing restoration specialist, but the Reborn Land Rovers came with the cachet of being rebuilt by the factory.

Previously featured with JUST 4x4s, that initial Reborn Series I, known as ‘Car Zero’, had been sold new through Annand & Thompson, Land Rover agents for Queensland and northern New South Wales in late 1950.

When it was discovered on a Queensland farm in rough condition 65 years later, what would become Car Zero still had its authentic 1.6-litre four-cylinder petrol engine, four-speed manual transmission, two-speed transfer case and semi-elliptic leaf spring suspension with telescopic dampers – all standard C1950 Land Rover spec. This made it an ideal candidate for a Reborn restoration.

As demonstrated by Car Zero, international borders presented no barrier for Reborn, and as the Series I had been sold all over the world, candidates for restoration could come from literally anywhere.

Such was the case with the vehicle featured.

What would be the 20th of 25 Reborn Land Rover Series Is started life as an export model, originally built in 1951.

During the Land Rover’s development a few years earlier, Rover, like most other British car manufacturers of the period, were subject to rationing of vital materials like steel, but those rations could be increased if the company was exporting their products and thus bringing money into Britain’s war-ravaged economy.

For 1948, Rover had only been allocated enough steel to build an estimated 1,000 Land Rovers – well short of the company’s expectations of 5,000 units in the first year of production. As such, export models were a focus from the beginning.

Speaking of exports, the prototype Land Rover had a centrally-placed steering wheel, which would have removed the need to create a separate left-hand drive variant for Europe, North America and other LHD markets, but by the time the 25 pre-production prototypes were being tested, conventional LHD and RHD configurations had been settled upon. 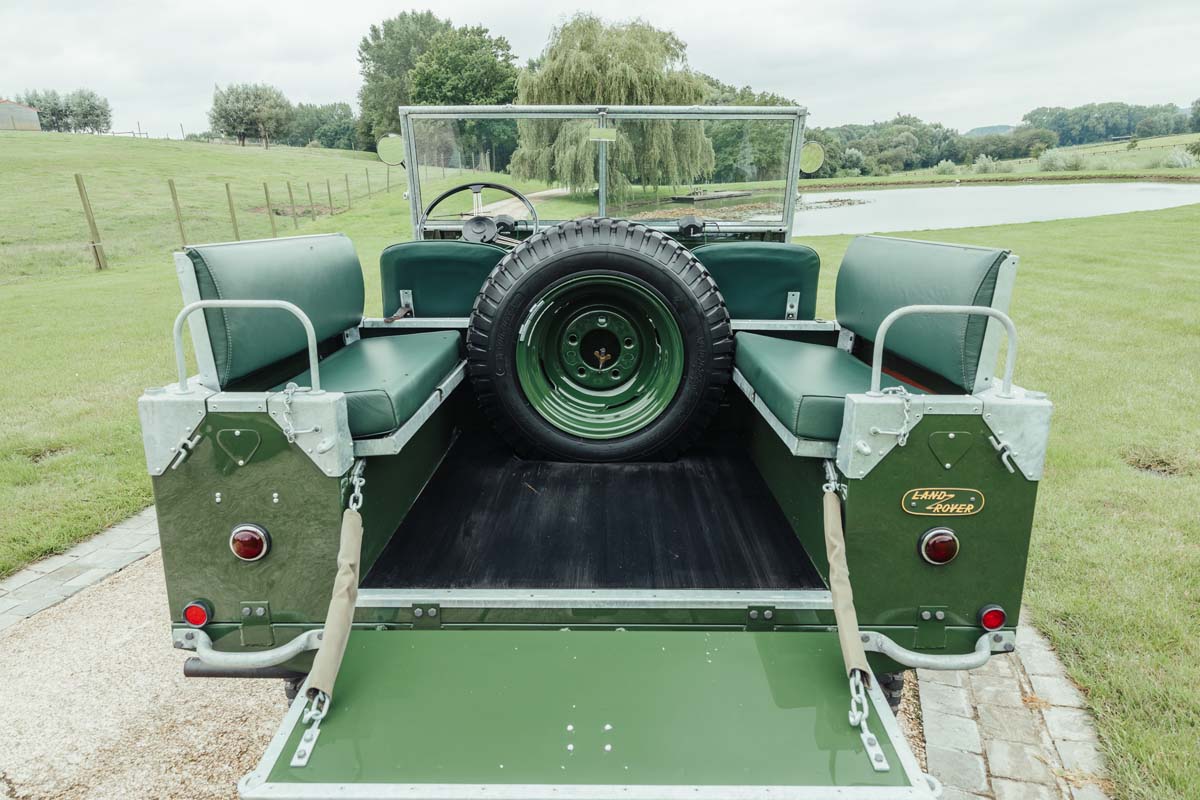 That launch proved to be a smash hit and the response exceeded expectations, leading to more than 8,000 Land Rovers being produced in the first year, the majority of which were export units.

By the time the vehicle featured was built in 1951, total production was nudging close to 50,000 and Land Rovers were in use as far afield as Asia, North and South America, the Middle East and all over Africa.

Exports still accounted for the bulk of sales, with Australia and South Africa talking the lion’s share. In terms of LHD production, the distribution in those early years is less clear, but former European colonies in Africa were popular markets, while in Europe itself, Switzerland was one of the better customers. Presumably, the Land Rover had what was required to deal with snowy Alpine winters! 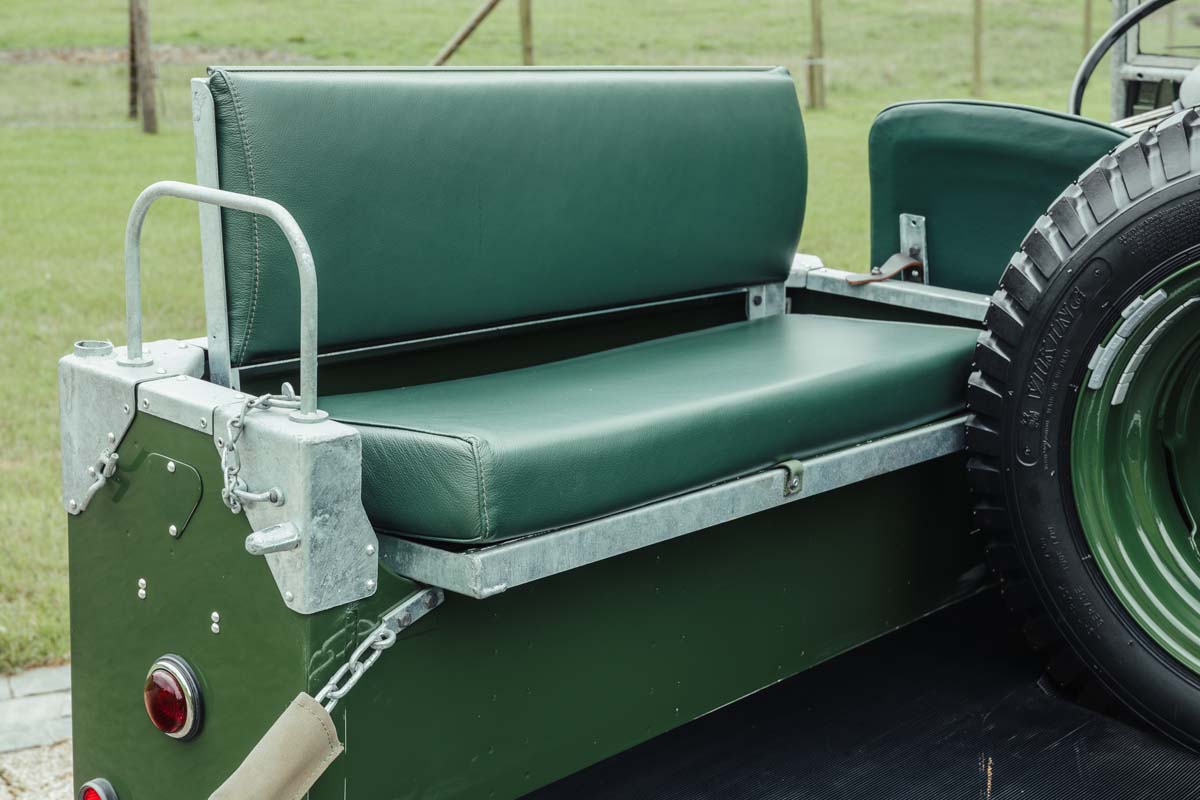 Land Rover sales in North America at this time are similarly unclear, but they seem to have ebbed and flowed through the 1950s and ’60s, partly due to changing distributors, but also due to established four-wheel drive competition in the form of Jeep, and later, the International Scout and Ford Bronco that weren’t present in other markets. Listed US Land Rover imports of 1,840 in 1965 plummeted to just 415 two years later, then were back over 1,000 again in 1969. By 1974, Land Rover had pulled out of the US entirely due to the costs of safety and emissions compliance.

Whether the Land Rover Series I featured was originally delivered to the US is unknown, but its chassis number – 16133267 - indicates it was shipped as a complete vehicle for an LHD market, rather than in CKD form for local assembly.

What is certain is that it was built as an LHD export model, identified by the obvious steering wheel placement, but also by the indicators in the front guards, which wouldn’t become a feature of RHD production until later in the Series I’s lifespan.

These changes aside, the vehicle runs the same 80-inch wheelbase, 1.6-litre petrol engine, four-speed manual transmission, two-speed transfer case, solid axles front and rear, leaf springs and other componentry as any other 1951 Series I and is one of an estimated 17,360 built that year. 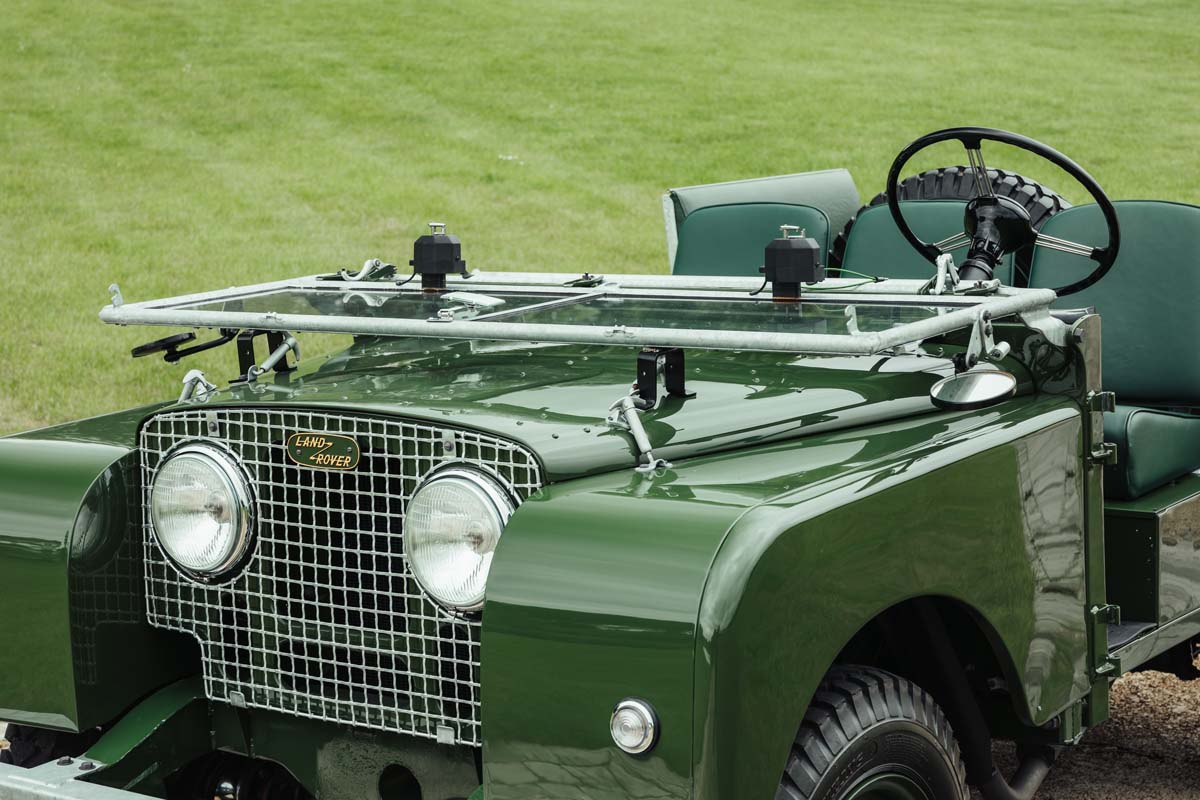 As with where this 1951 Land Rover was sold initially, where it was sourced from for the Reborn programme is also unknown.

Pictures of the vehicle as it arrived at Land Rover Classic’s facilities show it painted white (not a factory colour when new), with full-frame doors and a full-length metal canopy fitted. This, along with a Clayton heater visible in the restored images, suggests it was a cold-climate vehicle.

Other features, like the larger external mirrors, spotlights on the front wings and a large “pusher” front bumper are obviously later additions and harder to explain, but make it clear that this particular Series I, like most of its contemporaries, was a working vehicle for most of its life. 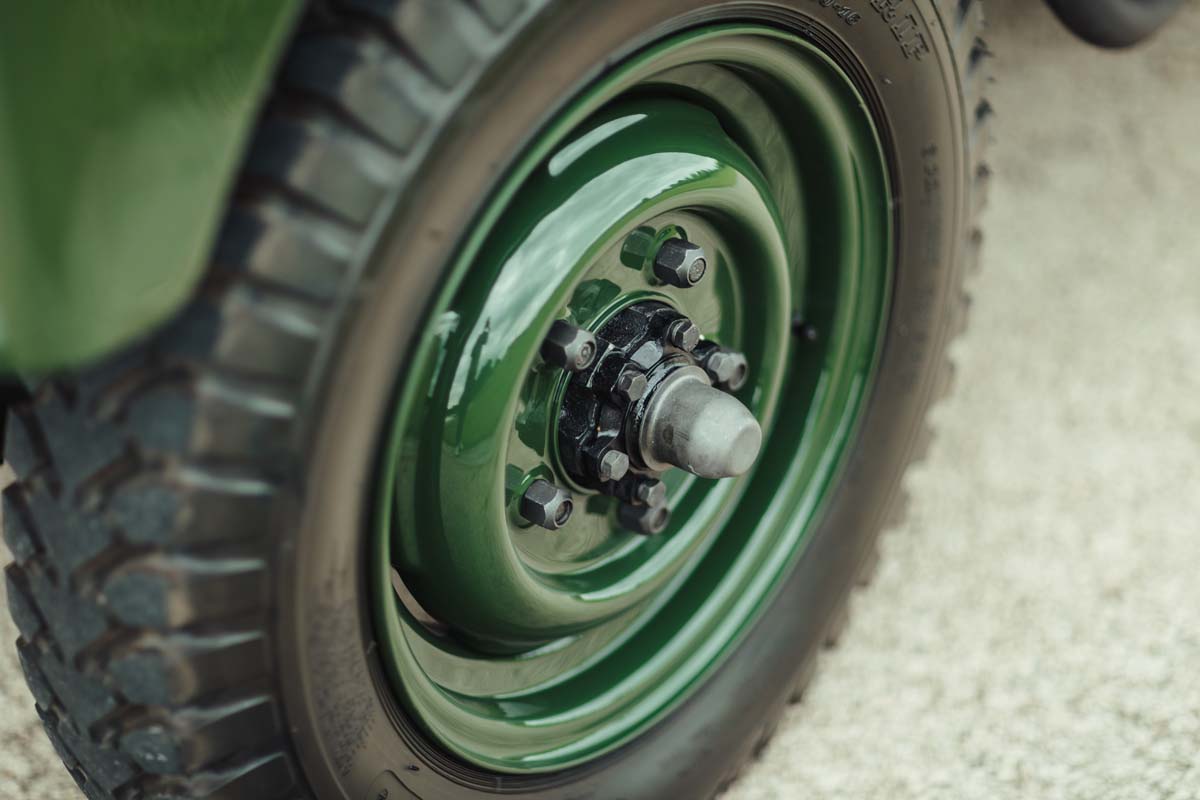 What is known is that this vehicle would be the only one built to ‘North American’ specification and only of ten LHD Series Is restored under the Reborn programme.

It was apparently going to be a display vehicle for a proposed JLR Classic showroom in the US, but that fell through and the showroom eventually opened in Dusseldorf, Germany, instead.

Arriving at Land Rover Classic in February, 2018, the restoration of Series I #16133267 followed the path of other Reborn Land Rovers, starting with a detailed authenticity assessment and a thorough examination of its condition. 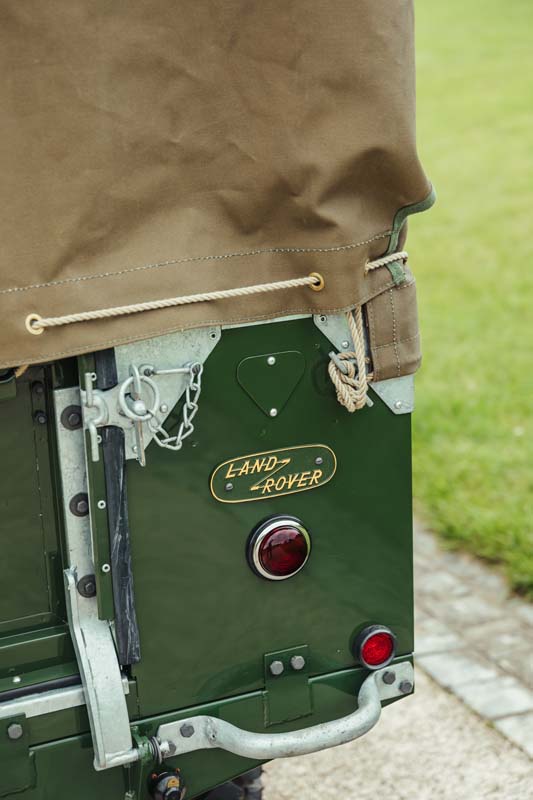 The vehicle was then extensively photographed before it was stripped to the chassis and bulkhead. These components were then media-blasted, followed by the replacement of any corroded metal. The fact that this particular restoration took more than 18 months suggests some significant repair was required in the chassis

As with other Reborn vehicles, once the chassis was refurbished, primed and painted, attention turned to the body panels, which in this instance, appeared to be in reasonable condition; at least better than what was evidenced on Car Zero from a couple of years earlier. 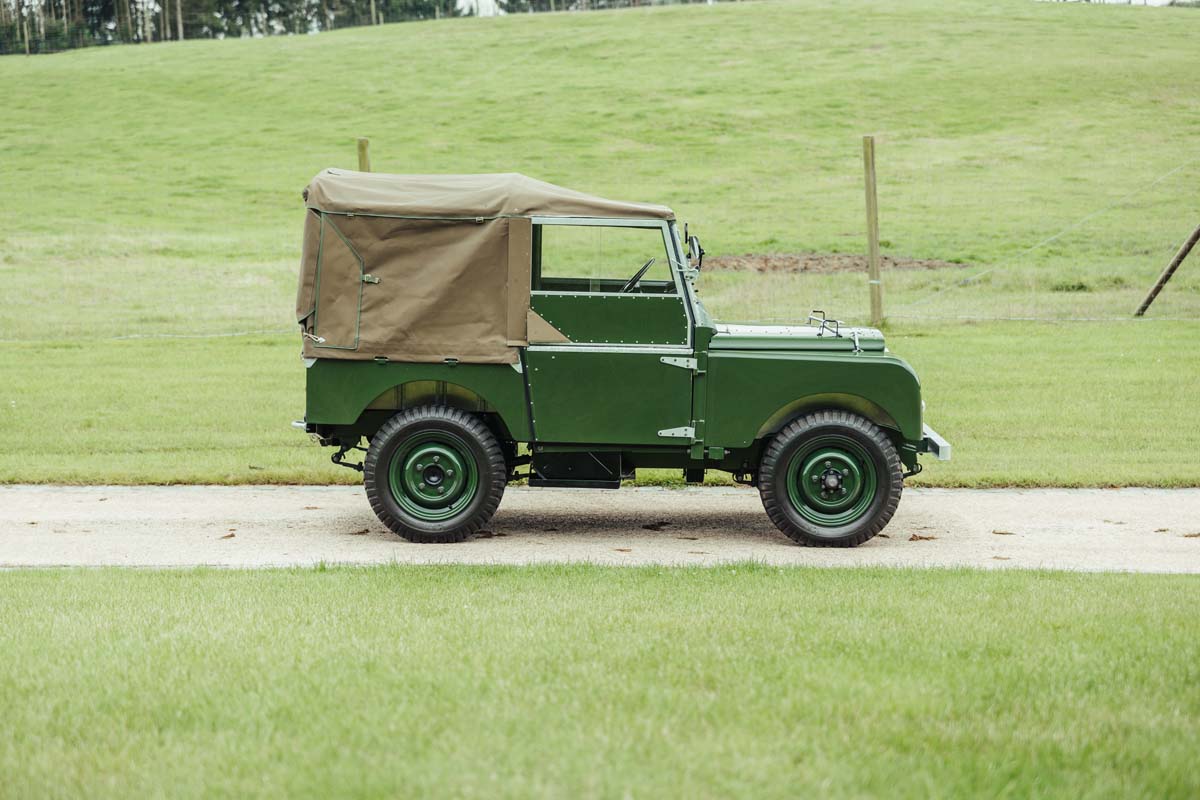 Following cleaning and etch priming, the panels were treated to multiple coats of Bronze Green paint, with over-spray applied to the underside of the bonnet and the rear body panels – just as Rover would have done in 1951. The painted body panels were then low-bake cured before being polished.

Mechanically, the condition of the engine appeared to be good, but the pistons, valves and valve gear, timing chain and other parts were all replaced. The block and head were acid-dipped and repainted, with all the consumables, like filters, gaskets and spark plugs replaced during reassembly.

Fully blueprinted, the completed four-cylinder petrol engine was then run on a testbed at JLR Classic Works before installation.

A similar painstaking approach was taken with the transmission, four-wheel drive system, brakes and suspension. 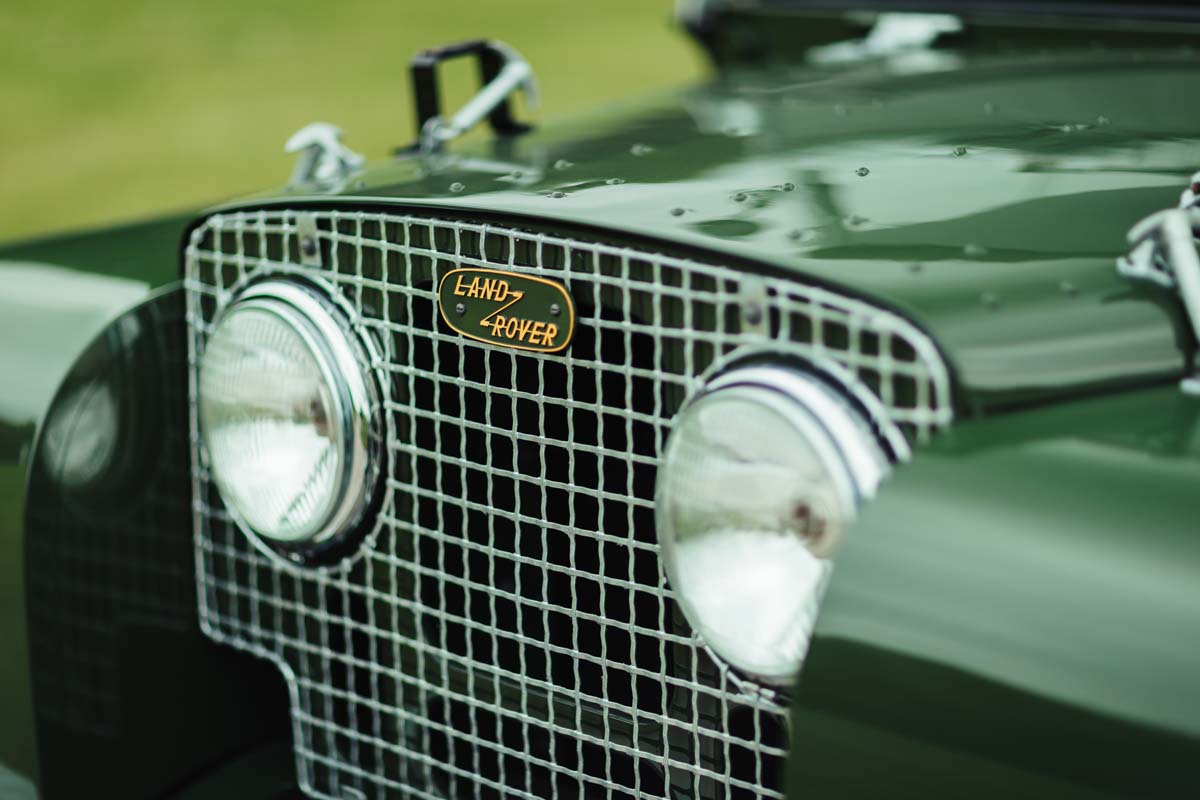 Inside, the spartan nature of these early Series I models means there wasn’t a lot to do, beyond refurbishing and retrimming the seats (including the troopcarrier-style rear seats), replacing the steering wheel with a refurbished unit and restoring the gauges. The wear on the pedals suggests they’re the originals, but this is unknown. Same goes for the gear shifters and other in-cabin hardware like buttons and switches, but these are more likely to be reproductions.

The instructional plaques on the dash for the transfer case operation and under the bonnet for the recommended lubricants are the originals, though, and were carefully replaced.

As with the other Reborn vehicles, reassembly was the longest part of the restoration process on this example, with extra care taken to ensure the highest standard of build quality.

In place of the metal canopy that this Series I arrived with, an all-new canvas canopy was fitted, with new mirrors, bonnet latches, badges and other exterior trim completing the work.

Finally, before this Land Rover went to JLR Classic’s Dusseldorf showroom, it was re-inspected following the engine installation and shakedown mileage, after which the engine oil and filter was changed, paint protection applied and a final audit completed.

Following delivery to its first owner, this Land Rover is thought to have remained in Europe before it was added to Bonhams’ Zoute Sale in Belgium last October.

Given that Car Zero, the first Reborn Land Rover Series I, more than doubled its pre-auction estimate to sell for AU$337,000 at an RM Sothebys auction in 2020, there were some high expectations for this vehicle.

Still in as-new condition throughout, this Reborn Series I sold for 115,000 Euros (AU$181,700 approx.), which was just within its estimate, but still a hefty price to pay for an early Land Rover. However, as with the rest of the Series Is restored under the Reborn programme, they’re essentially a brand new 70-year-old vehicle.

The price achieved by this Land Rover was part of a total 12.3 million Euros (AU$19.4M approx.) achieved at the Zoute Sale, which is the best overall result for this auction since it was first held by Bonhams in 2012.

For more details, go to: bonhams.com