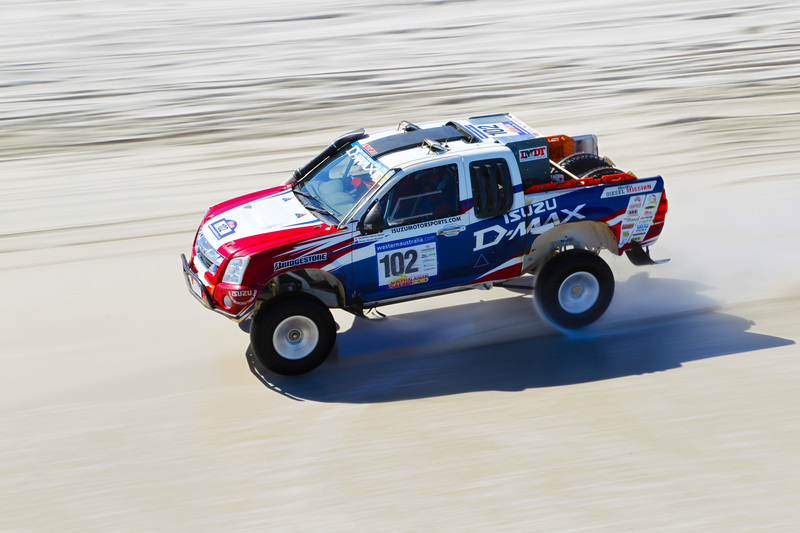 The Sydney-based off-road racing star will make his 16th start at the Safari after an enforced lay-off of more than a year, the result of fracturing a vertebra during the 2011 Dakar Rally, and then having a heart attack while on holidays two months later.
With the 2012 Australasian Safari just about to get underway, one of the keenest competitors is veteran racer Bruce Garland. With five Aus Safari wins already under his belt, Garland is gunning for a sixth crown this year, and is also aiming to make his Isuzu D-Max the first diesel to win the Safari.

The Sydney-based off-road racing star will make his 16th start at the Safari after an enforced lay-off of more than a year, the result of fracturing a vertebra during the 2011 Dakar Rally, and then having a heart attack while on holidays two months later. He had five bypasses done by the specialist team at Melbourne's Monash Heart. He and long-term co-driver Harry Suzuki are tackling the 2012 Safari in preparation for a return to the Dakar in 2013, which will run through Chile, Argentina and Peru next January.

The pair's best result in the Safari of recent years was third outright in 2010 - and first diesel - in their 2011 Dakar-spec D-MAX. More than half that car was built using original Isuzu production parts and was instantly recognisable as a production Isuzu D-MAX.

Now the Isuzu Motorsports duo have a new ute - lighter, stronger, faster and better handling than its predecessor but still based around the D-MAX's steel cab, chassis frame and 3.0-litre turbo-diesel engine. Built by Garland and his team with the benefit of three years' experience competing in the legendary Dakar Rally, it is much closer to standard than many other off-road racing vehicles.

"Each time we build a new D-MAX, they get better and better. This one is light years ahead of the one that finished 11th outright during the 2009 Dakar," says Garland, who heads out of Sydney en route to WA this weekend (September 15).

"We used to have planes with propellers; now we have a jet! But it's not just about making it faster - it's still got to be strong, and this ute is better in all these areas than the previous utes. I'm really happy with it."

However, the Safari race engine will not be used in the Dakar Rally. Under the latest rules for the diesel pick-up class, the competition engine must be closer in spec to the standard engine.

Garland and the crew will do some last-minute testing on their way across to the west, including a high-speed shakedown on private property and getting bogged in sand so they can practise their recovery skills - always vital for both Safari and Dakar.

"We've really drawn on all our existing Dakar experience to build this ute and it's a ripper. We love doing the Safari and we've had a lot of success there, so Harry and I are really looking forward to taking the new D-MAX into battle and hopefully coming away with another win. That will be a great result in itself and a fantastic lead-in to our Dakar campaign."