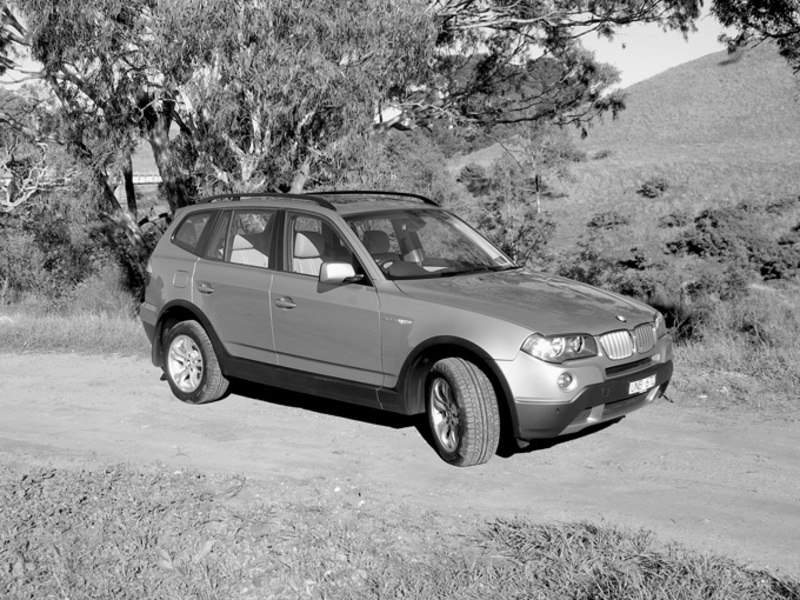 The second generation BMW X3 with more BMW input, as opposed to the original outsourcing of the project addressed many of the original problems. It arrived late in 2006 and rather than revolutionary, hosts a number of key upgrades and revisions that have given the X3 a better feel and look. The updated version builds on the strengths of its predecessor and moved the X3 into the ranks of the genuinely sporty - and dare I say -prestige all-wheel drives. The X3 is offered with two six cylinder petrol engines, but for our test we chose the 3.0d turbo diesel. This unit boasts the latest variable turbine geometry turbocharger, all aluminium crankcase and high pressure common rail injection.

It produces 160kW of power at 4000rpm, but it is the 480Nm of torque from just 1750rpm that really set this motor apart. From standing start it achieves 100km/h in just 7.9 seconds and goes on to a top speed of 210km/h. All this with a fuel consumption of 8.6-litre per 100km. The X3 runs the BMW xDrive all-wheel drive system. xDrive delivers variable torque distribution between the front and rear axles. It uses DSC?sensors to evaluate data such as wheel angle and wheel slippage and via a multi-disc clutch distributes engine power between the axles instantaneously. In normal driving situations the torque is distributed 40:60 but can also be varied automatically between 50:50 and 0:100 for the best driving stability, dynamics and traction.

In certain circumstances up to 100 percent of torque can be briefly directed to the front axle. A differential locking function is activated with xDrive by selective application of the brakes on the wheel that's spinning.

Exterior
The X3 received a number of minor body changes that give it a more upmarket look. There is the "six-eyed look", and the BMW kidney grille was increased in size to provide a more purposeful look to the front of the car. At the rear there are new light assemblies covered with horizontal rods of light to give a striking look at night. The rear profile has a number of horizontal hues that combine to produce a strong appearance.

Interior
BMW has carried the makeover theme inside, where the cabin now has a more upmarket feel. There are minor cosmetic changes to trim around the instrument panel and decorative surfaces, along with a mix of metal surfaces that add to a vibrant interior feel. There is a feeling of spaciousness with additional storage areas and bigger door bins. The three spoke steering wheel is also new. The dash is uncluttered and the gear selector falls easy to hand. The centre console is improved and there is Blue-tooth compatibility for mobile phones.

Standard interior features include front arm rests, automatic air conditioning, centre rear arm rest, courtesy lights front and rear cupholders, digital clock rear load area cover, on board computer, manual seat adjust (power adjustment being a major oversight) power mirrors, windows , etc. The X3 is touted as a compact AWD, but in reality there is plenty of room for a family of five and while the cargo area is not huge, is adequate for most needs. Even back seat passengers are afforded good leg room and a centre folding armrest.

On the road
While not as good as an X5, the X3 delivers a commanding driving position. Seating is good although additional side bolstering would be appreciated. The 3.0-litre turbo diesel engine is a stunning unit with excellent launch power. Thanks to the impressive punch of 480Nm of torque, which comes on tap at relatively low revs, this engine really rates as superb. It is well matched to the 6-speed steptronic gearbox that allows the driver the ability to let the auto call the shots or by using the step mode to explore the extremities of the X3 drivetrain. On winding roads the driving experience is refined and the X3 is sure footed and agile in most situations. Power is effortless and comes on smoothly making this an excellent drivers vehicle. And let's not forget we are not talking a sedan here but a mid-sized all-wheel drive with a fair amount of bulk to carry.

Performance is impressive and on road handling manners are acceptably compliant. Acceleration is brisk and the 3.0d reached 0-100km/h in less than 8 seconds. Steering is precise and while moderate body roll, the X3 does deliver a sporty edge. The diesel is no slouch and even at highway speeds can easily step up a notch for safe overtaking. The xDrive system works intuitively and in harmony with a host of safety features that are always working in the background, and compensating for any driver error or change in road surface. The BMW X3 is equipped with auto-matic stability and traction control, ABS, dynamic stability control, dynamic brake control, automatic slip control, cornering brake control, increased brake read-iness, fade compensation, dry brake function and hill descent control.

xDrive works in parallel with DSC and engine control through the integrated chassis management system. Surrounded by this web of electronic safety programs is not a green light for driver stupidity, as there will always be a point where the best of systems cannot compensate for major driver error, but is an arsenal of programs to enable drivers to enjoy the X3 driving experience content in the knowledge they are aided by all these driver safety enhancements. The combination of xDrive and DSC stability control detects situations in which traction loss is likely and in an instant, transfer drive to the specific wheels with most traction. This system actually anticipates problems before they occur, rather than reacting after slip or other signs are detected. In normal conditions drive is 60 percent to the rear wheels.

The sum of these systems is that the X3 delivers excellent on road dynamics, yet is still capable off road. To be brutally frank, the X3 is at home on roads, and in our short sortie into the bush, the X3 was not as comfortable. The diesel provided impressive pulling power where required and easily hauled the vehicle over obstacles at walking pace. Ground clearance however is a problem and the low front fascia is liable to damage. Hill Descent Control - a legacy from when BMW owned Land Rover is probably unnecessary as few drivers are ever going to be descending steep hills where HDC may be of benefit. Yes, the X3 has some off road ability, but is a far more attractive beast performing on road.

Summary
The X3 3.0d is an impressive vehicle that has been vastly improved. It is now a genuine luxury all-wheel drive. Ride and handling are good, and it has a solid and safe feel. The turbo diesel engine is superb and is a great match with the 6-speed steptronic automatic. This is now a stylish and good looking vehicle that is a handy size for urban commuting, yet still large enough to accommodate the average family. The engine is not only productive, but also delivers economy at the bowser. The X3 3.0d would make a good towing vehicle and BMW even equip a trailer stability control for safer driving. When connected to the trailer or caravan, DSC can counteract the effects that could lead to an unstable trailer and the resulting accident. Along with numerous driver aids, the X3 is equipped with six airbags - front, side and curtain. The BMW X3 3.0d is a first rate machine that has many applications. It has raised the prestige stakes in the mid-sized SUV segment.
Brian Tanner 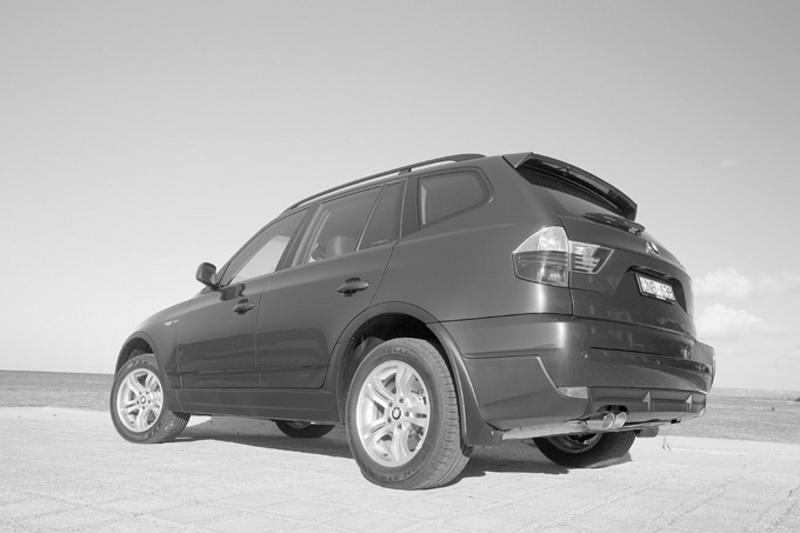 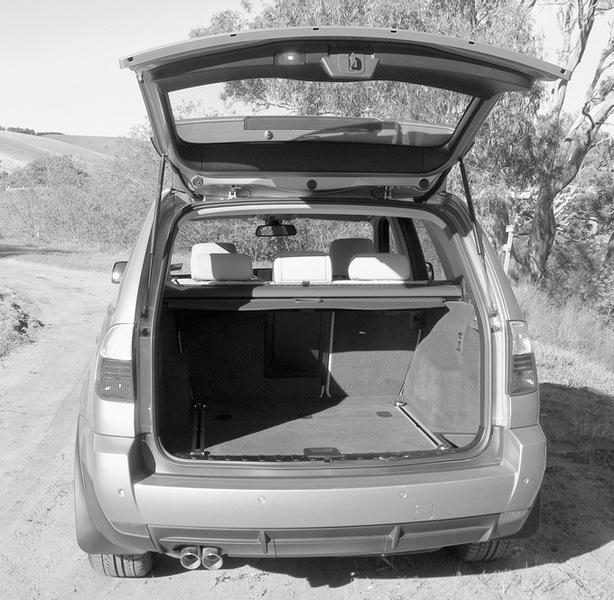 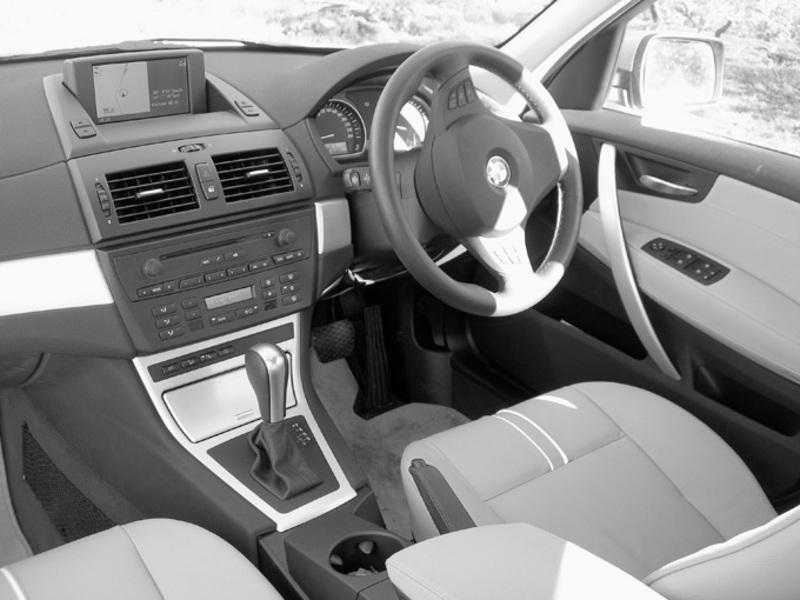