Peterhansel and Sainz switch to Audi for electric attempt at Dakar victory. 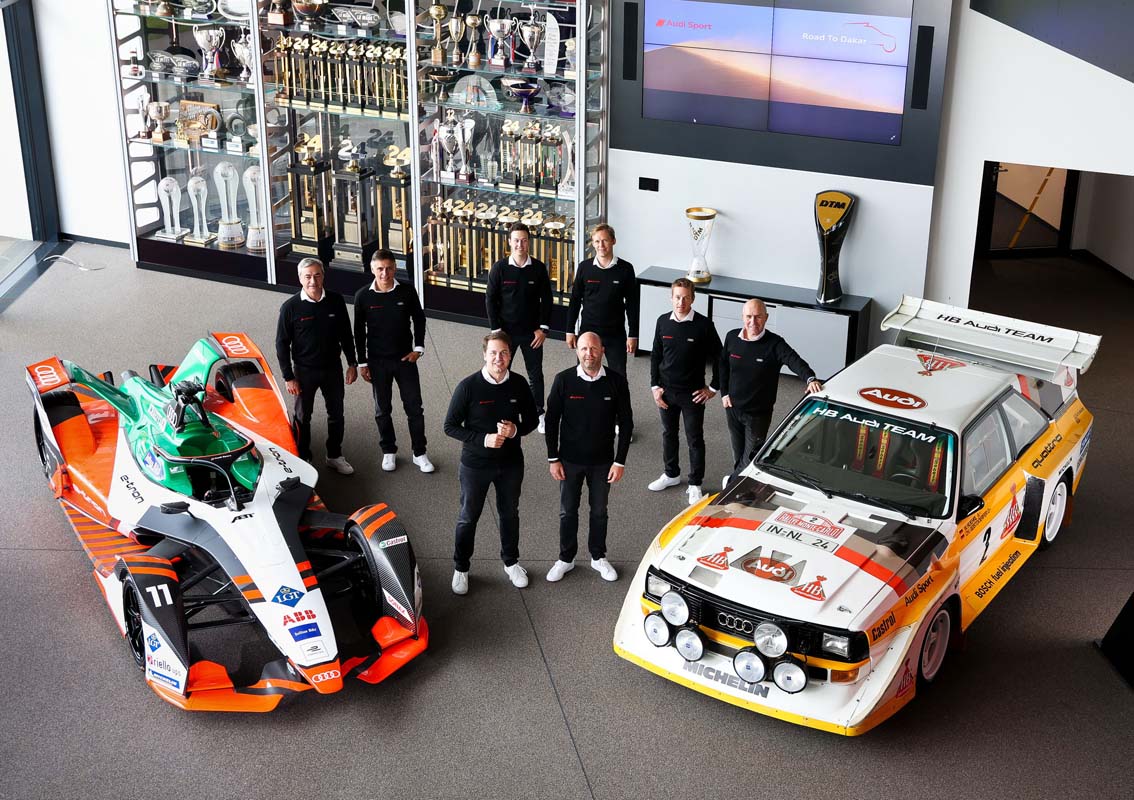 The driver lineup includes 14-time Dakar winner Stéphane Peterhansel (partnered with Edouard Boulanger), three-time winner Carlos Sainz (with Lucas Cruz) and Mattias Ekström (with Emil Bergkvist). Peterhansel/Boulanger and Sainz/Cruz have moved to Audi from the Mini X-Raid team, while Ekstrom has a long history with Audi, but mainly in tarmac racing (including at the Bathurst 1000 in 2013) and rallycross. Bergkvist comes from the World Rally Championship, where he’s served mainly as a driver, but has moved to a co-driver/navigator role this year.

“It’s no exaggeration to speak of a ‘dream team’,” said Audi Sport GmbH Managing Director, Juilus Seebach. “Stéphane is the most successful Dakar driver of all time. Carlos is a multiple Dakar winner and World Rally champion. With Mattias, we already celebrated many Audi successes in the past. He is one of the world’s most versatile drivers.

“In addition to a lot of speed, they are all adding an extreme amount of expertise and motivation to our team. The same goes for the co-drivers, who play an increasingly important role in the Dakar Rally.”

Audi claim they will be the first manufacturer to fight for outright victory at Dakar with an electrified vehicle, which the respective driving teams are excited about.

“The Dakar is an extreme test for this technology,” Peterhansel stated. “We want to be the first team to win the Dakar Rally with an electric powertrain. I’m looking forward to tackling this very ambitious project with Audi.”

Sainz drew parallels between Audi’s groundbreaking quattro rally car and this new project: “The Audi quattro changed the World Rally Championship forever. Now we are trying something similar at the Dakar Rally. The Dakar is the ultimate challenge for an electric powertrain.”

Ekström knows he’s the ‘junior partner’ in the Dakar trio, so has been getting some off-road experience in the ‘Extreme E’ all-electric off-road race series this year.

“The Dakar will definitely be one of the most exciting adventures of my career,” Ekström said. “To be able to tackle this exciting project together with the team with which I celebrated my greatest successes is fantastic.”

Details on the vehicle Audi will campaign in January have yet to be fully revealed, but it’s being developed in collaboration with Q Motorsport, run by Sven Quandt, who formerly controlled the X-Raid team. What is known is the vehicle will feature three electric motors; one on each axle and a third used alongside a 2.0-litre turbocharged petrol engine.  According to Audi, the petrol engine will only be used to recharge the battery, with no ICE power driving the wheels.

Audi’s Dakar project will make its public debut at the Goodwood Festival of Speed this 8-11 July (COVID developments permitting), with testing of the car to take place at selected rally raid events in the lead up to the 2022 Dakar, which will take place in Saudi Arabia from 2 to 14 January.