Kiwi secures championship at final round

In what was a tightly contested season, Tom Alexander won the 2019 ECB SuperUtes Championship, securing the title at the series’ final round at Newcastle in November.

The second champion in the series’ short history, the 25-year-old from Christchurch prevailed against defending champion Ryal Harris and a field of other contenders, including Ben Walsh, Craig Woods and Cameron Crick.

Alexander came to the SuperUtes after securing championships in the Toyota 86 Series and Formula Libre in his native New Zealand in 2015, as well as finishing runner-up in the New Zealand Touring Cars Class One championship in 2017.

Joining the ECB SuperUtes Championship in 2018, its debut year, Alexander initially drove a Holden Colorado for Ross Stone Racing. On his way to third place overall in the 2018 championship, Alexander won six races and secured 10 other podiums, as well as three pole positions.

Alexander remained with Ross Stone Racing for 2019, but the team switched to a Caltex Delo-sponsored Isuzu D-Max, which would prove to be the sole D-Max in the 2019 field.

In an eight-round season that got underway at Adelaide in February, Alexander started by qualifying second behind the EFS 4x4 Racing Mazda BT-50 of Harris, but both drivers would be caught up in a Race 1 incident that put them at the tail of the field. In the following two races, Alexander finished second behind Harris both times.

Round 2 in Perth saw Alexander qualify second again, this time behind Ben Walsh (Fat Freddy’s HiLux), then win the opening race. A racing incident saw Alexander last across the line in race 2, but he bounced back to win race 3.

In Round 3 at Winton, the race victories were shared between Harris, Cameron Crick (Total Tools Team Triton Racing Triton) and Toby Price (Team Mitsubishi Triton), while Alexander’s best for the round was second place in races 2 and 3 as he struggled to adapt to the control wheels and tyres that had been introduced in that round.

Round 4 on the Townsville street circuit saw Crick take pole in qualifying, then the race 1 win, with Alexander fourth. In race 2, Alexander finished second behind Harris, with race 3 once again going to Crick as Alexander continued to adapt to the control Yokohama tyre.

At the midpoint of the 2019 ECB SuperUtes Championship, Alexander’s consistency saw him leading the championship on 592 points, 56 ahead of Harris, with Crick a further ten points back in third. 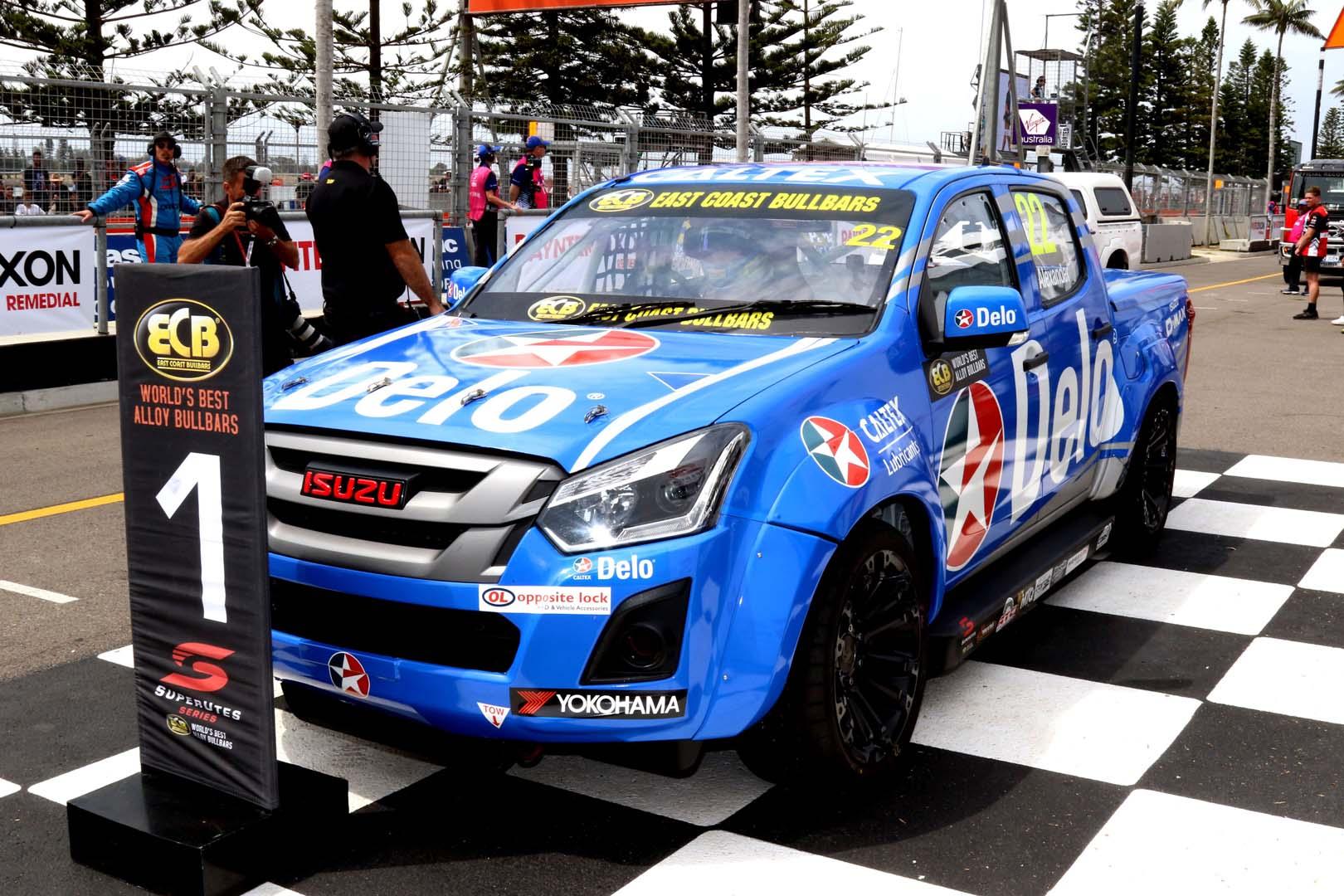 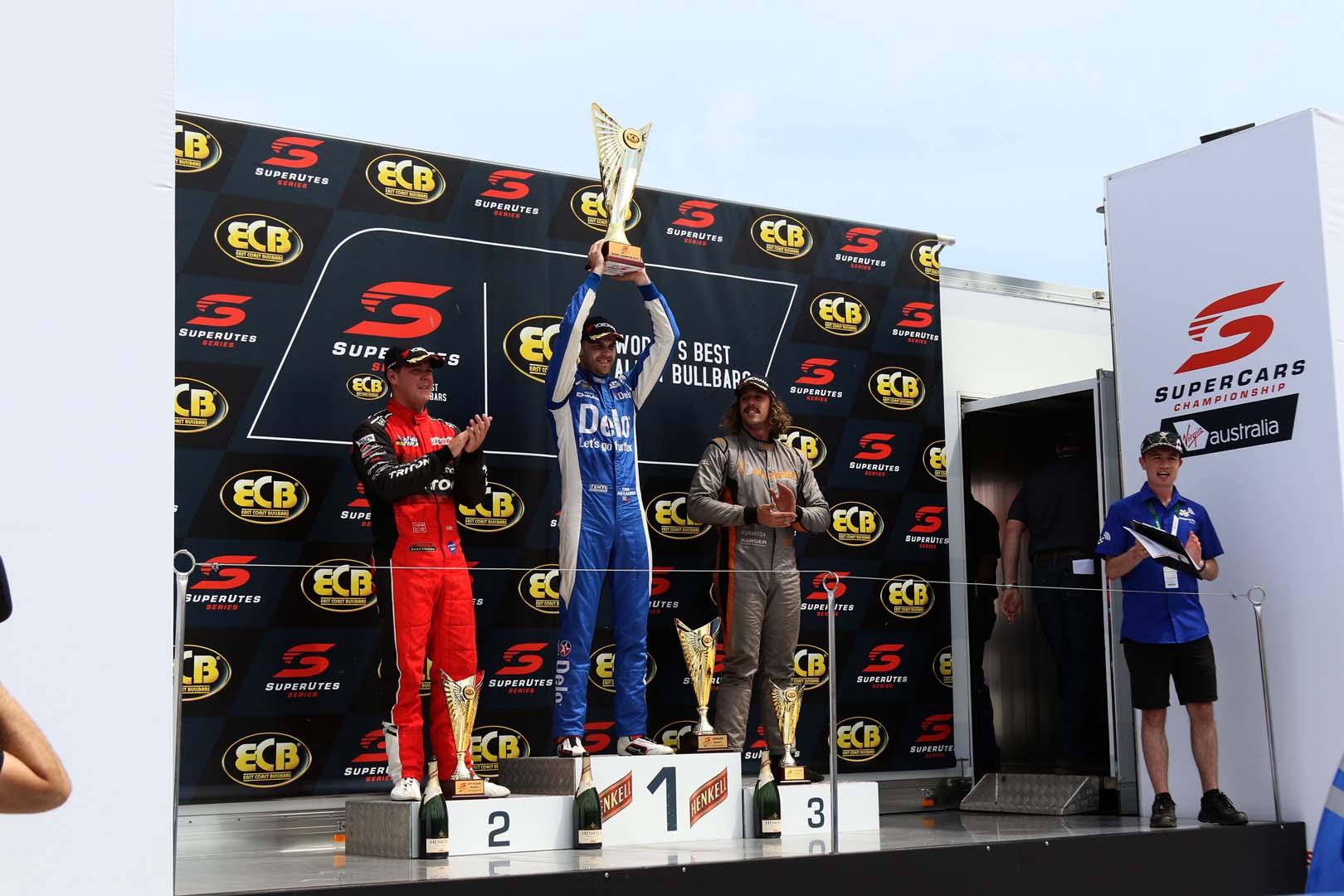 The second half of the season got underway at Queensland Raceway, Ipswich, in July, with Harris taking pole and converting that into a race 1 win. Price won the other two races, but fourth-DNF-fifth results for Alexander meant his championship lead was gone and he was now level with Harris on 706 points.

Round 6 saw the SuperUtes take on Mount Panorama at Bathurst, where the pendulum swung back to favour Alexander.

Harris qualified poorly, then blew an engine in the second of three races. Those two DNFs saw the 2018 champion tumble to fourth in the championship, while a ninth, a win and a third place for Alexander put him back in the overall lead, this time by 39 points from Crick.

Harris all but conceded the 2019 title was lost after Bathurst, but still fought on, attacking the penultimate round at the Surfers Paradise street circuit to take the race 1 win, followed by two second place finishes. Despite this, Alexander’s pole and 2-3-1 results for the weekend saw him extend his championship lead to 60 points.

Coming to the final round for 2019 on the Newcastle street circuit, Alexander was in the box seat with 1,029 points, but the total of 180 points available at the round meant that Crick (969 points), Harris (933) and Walsh (929) all had a chance at the championship, too.

The final round got underway with Alexander setting a new lap record to take a crucial pole on the tight street circuit ahead of Harris. The 25-year-old converted that pole into the race 1 win by a comfortable margin over Crick and Harris.

In the race 2 reverse grid start, Harris, Walsh and Craig Thompson (Western Sydney Motorsport HiLux) were all taken out on the opening lap when Elliot Barbour (Team Triton Racing Triton) misjudged a corner. Alexander managed to dodge the carnage and finish second behind Craig Woods (Western Sydney Motorsport HiLux), which was enough to put the championship beyond doubt.

Having already lost the championship, Harris’s weekend got worse when he was first across the line in the final race but was later penalised 15 seconds for contact with Alexander on lap 4. The infringement dropped him back to fourth and elevated Crick to the win. Alexander would recover to finish third in the race, knowing he’d already won the championship 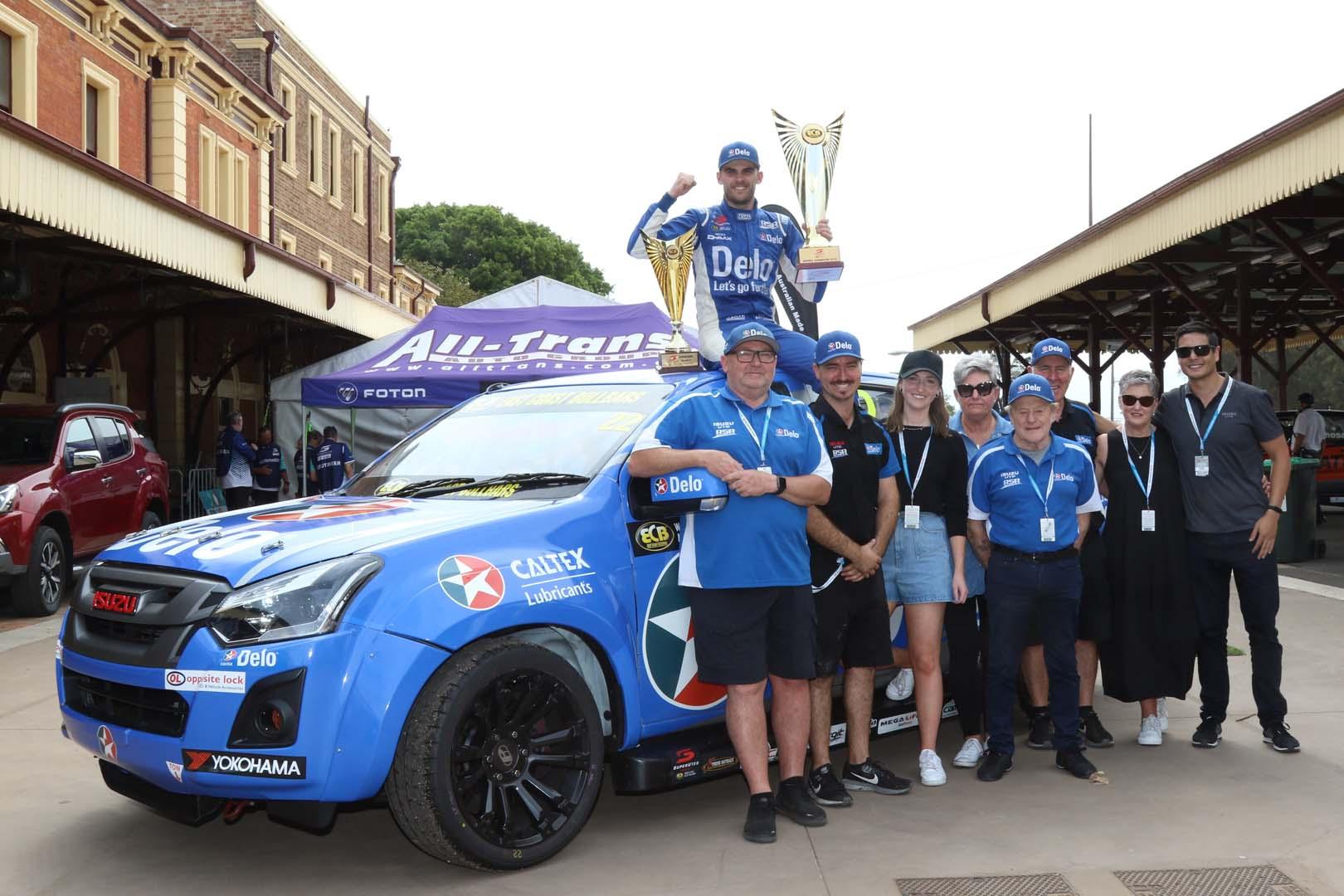 Alexander’s final tally for 2019 was five race wins, fifteen podiums and three pole positions, for a total of 1,203 championship points - 67 points clear of Crick in second.

“It feels so good to lift that trophy at the end of the season, it was a long road to get to here, but we did it!” said an elated Alexander.

“I couldn’t have asked for a better team to support me, a better car to race, better sponsors—thanks Caltex Australia and Isuzu UTE Australia—who believed in me, or a better bunch of blokes to race against—they all drove incredibly well throughout the season.”

Ross Stone Racing team boss, Ross Stone identified Alexander’s consistency – only one DNF for the season and a handful of poor finishes – as the key to his victory.

“Tommy raced smart all season and he did an incredible job to win the 2019 Championship,” Stone enthused.

“He had the right tool for the job—switching from the Colorado to the D-MAX for the 2019 season—which performed incredibly well and allowed him to consistently earn points all season, rather than focusing on outright race wins. It’s a strategy that has worked for champions all around the world and I’m proud to see Tommy lift the championship trophy at the end of this season.” 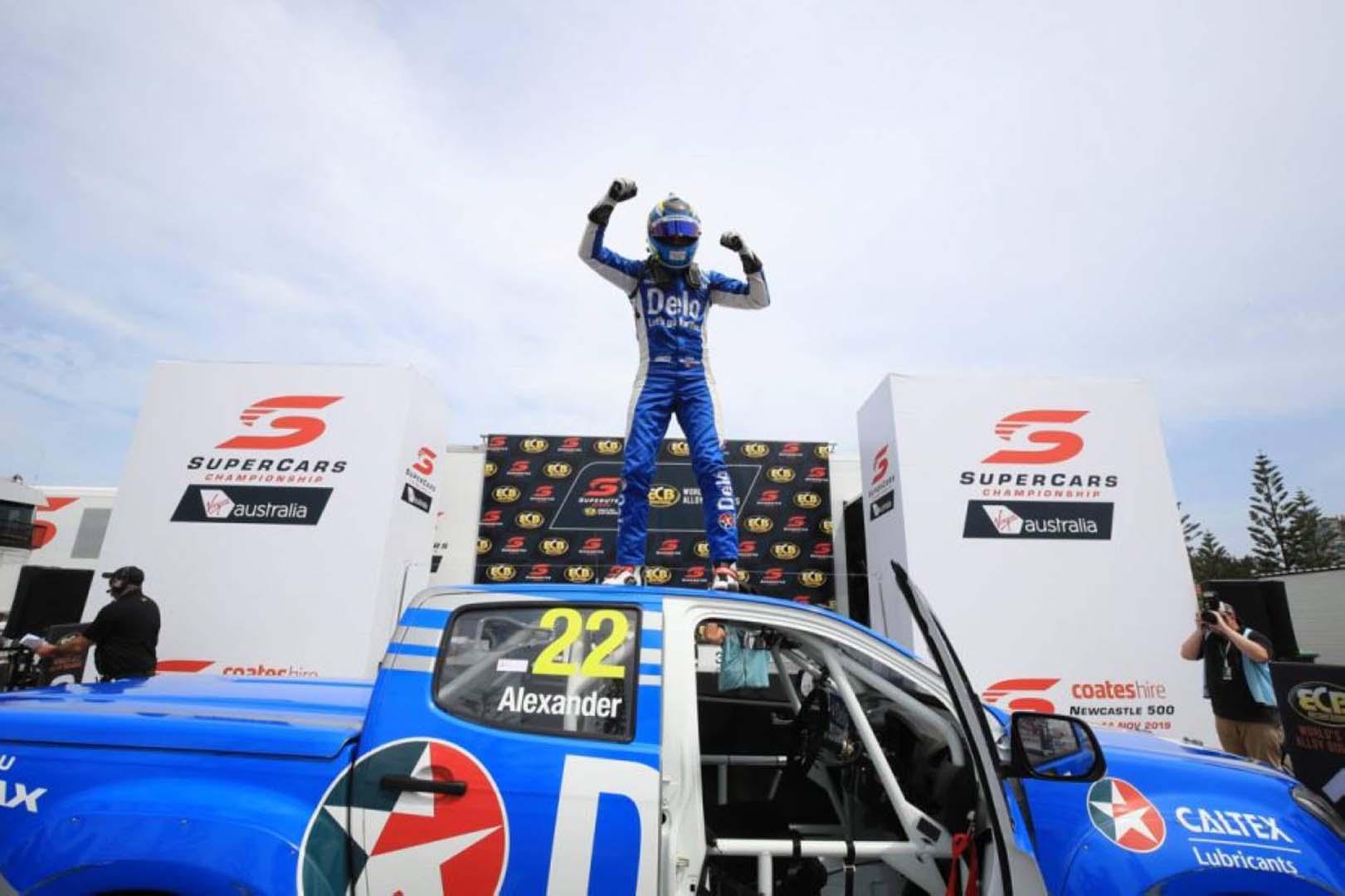 With the ECB SuperUtes Championship set to undergo several changes, Alexander is uncertain of his plans for the 2020 season, with a drive in the Dunlop Super2 feeder category for Supercars a possibility, as well as a championship defence in the SuperUtes.

“I am still working on plans and weighing up all the options," Alexander told Supercars.com in December.

"Looking at all my options, it's no secret I would love to do Super2 and I have definitely been looking into it.

"It obviously all comes down to sponsorship and how much money we can raise, but I'm definitely not writing off a return to the utes at some stage.” 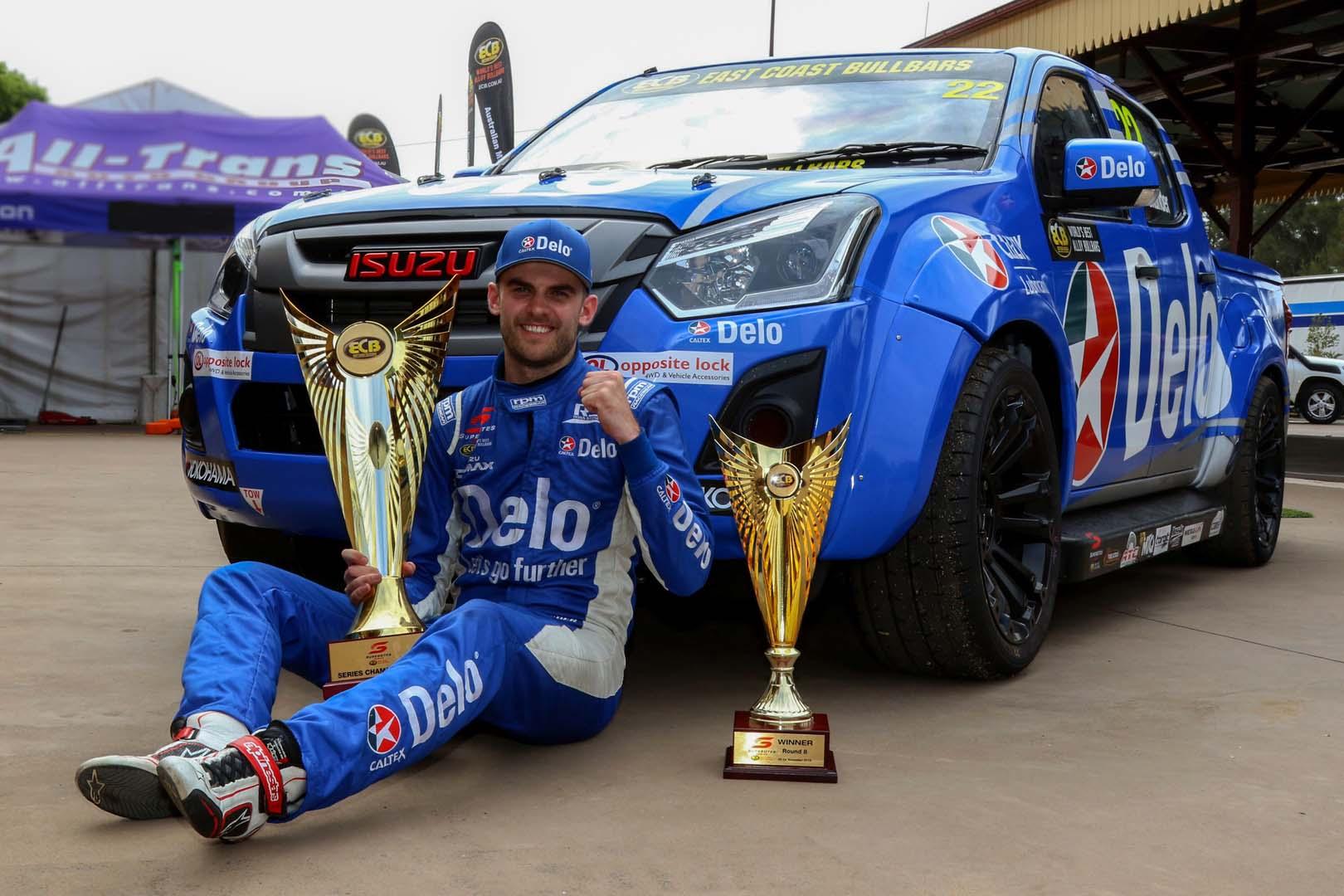 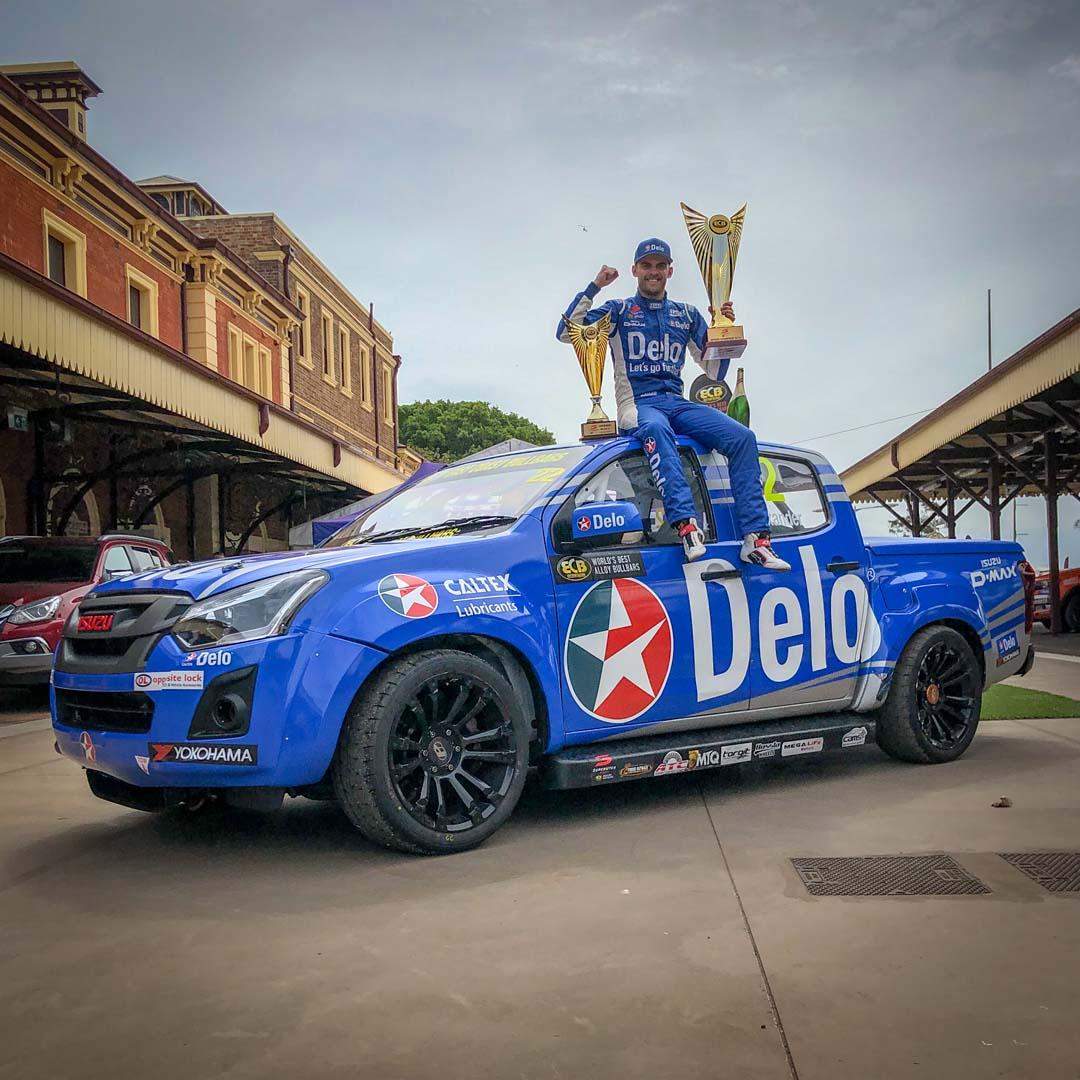