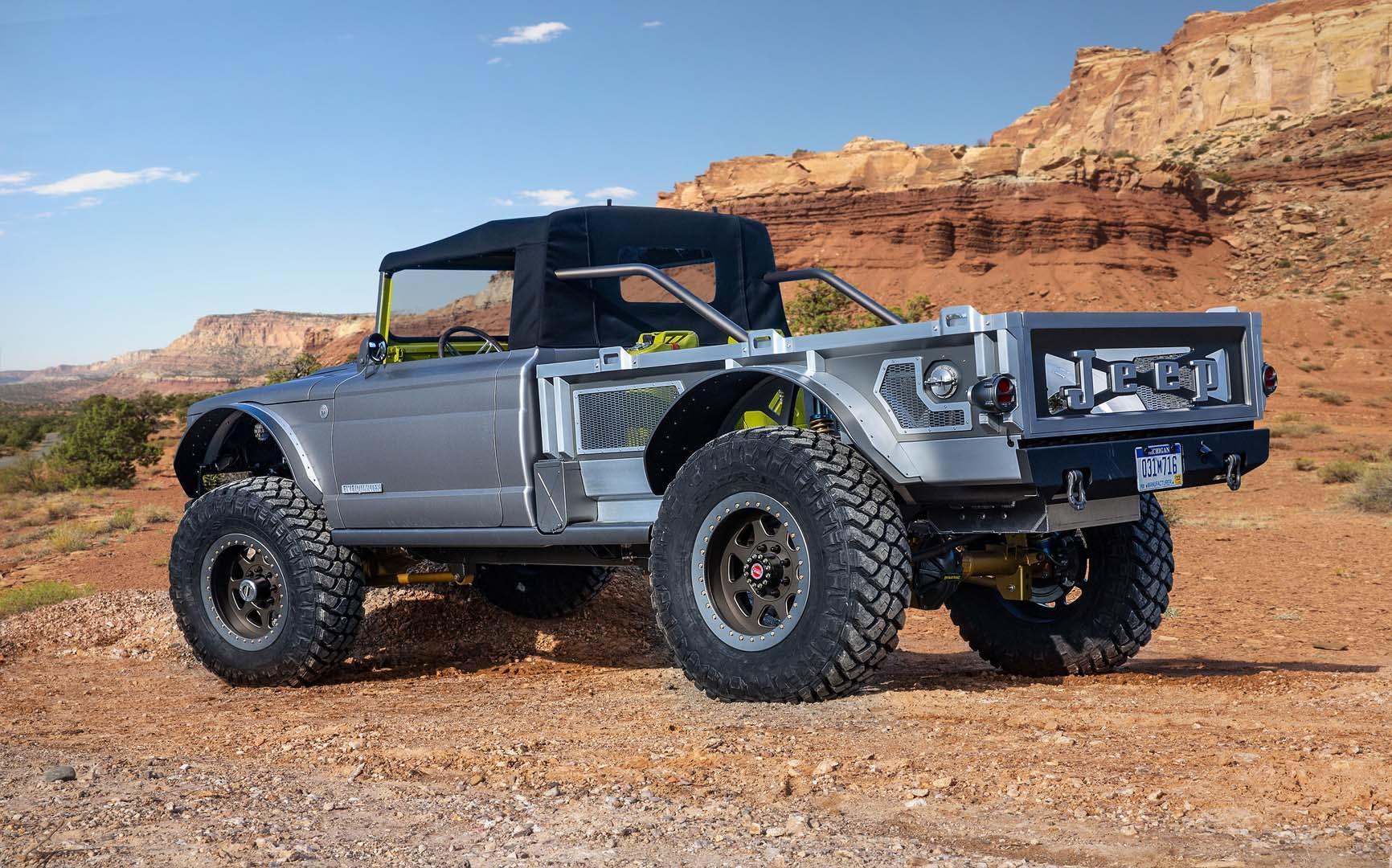 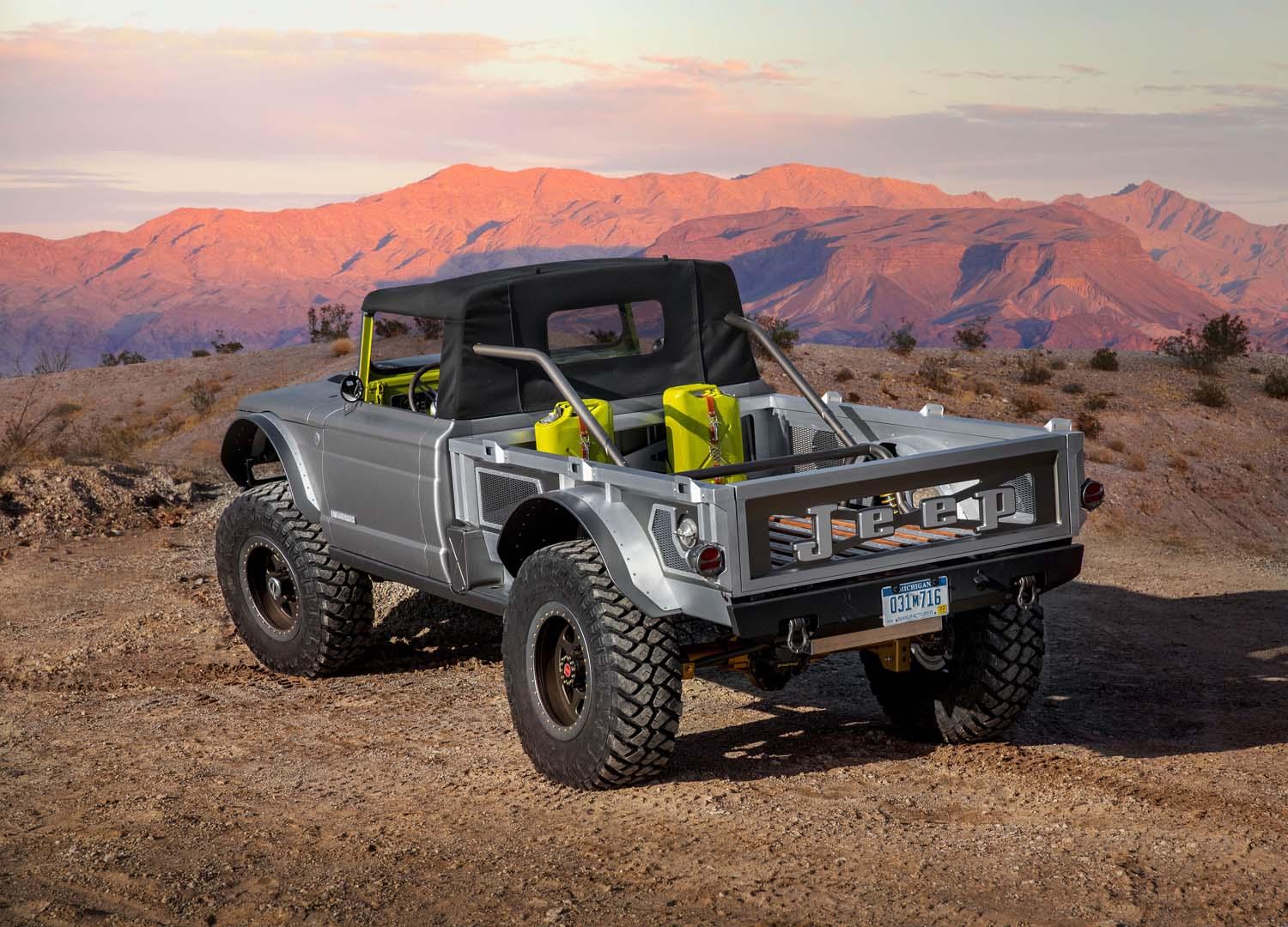 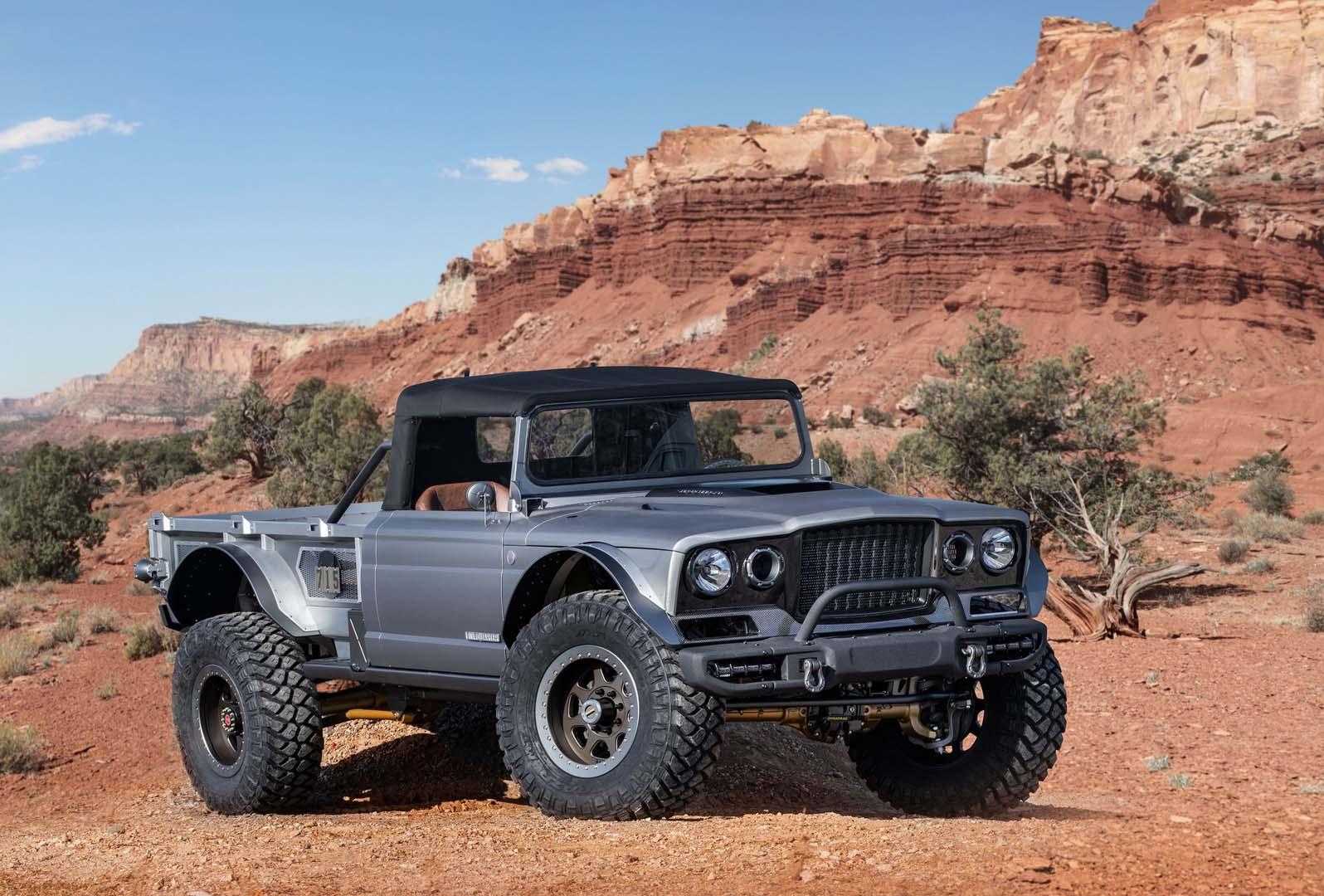 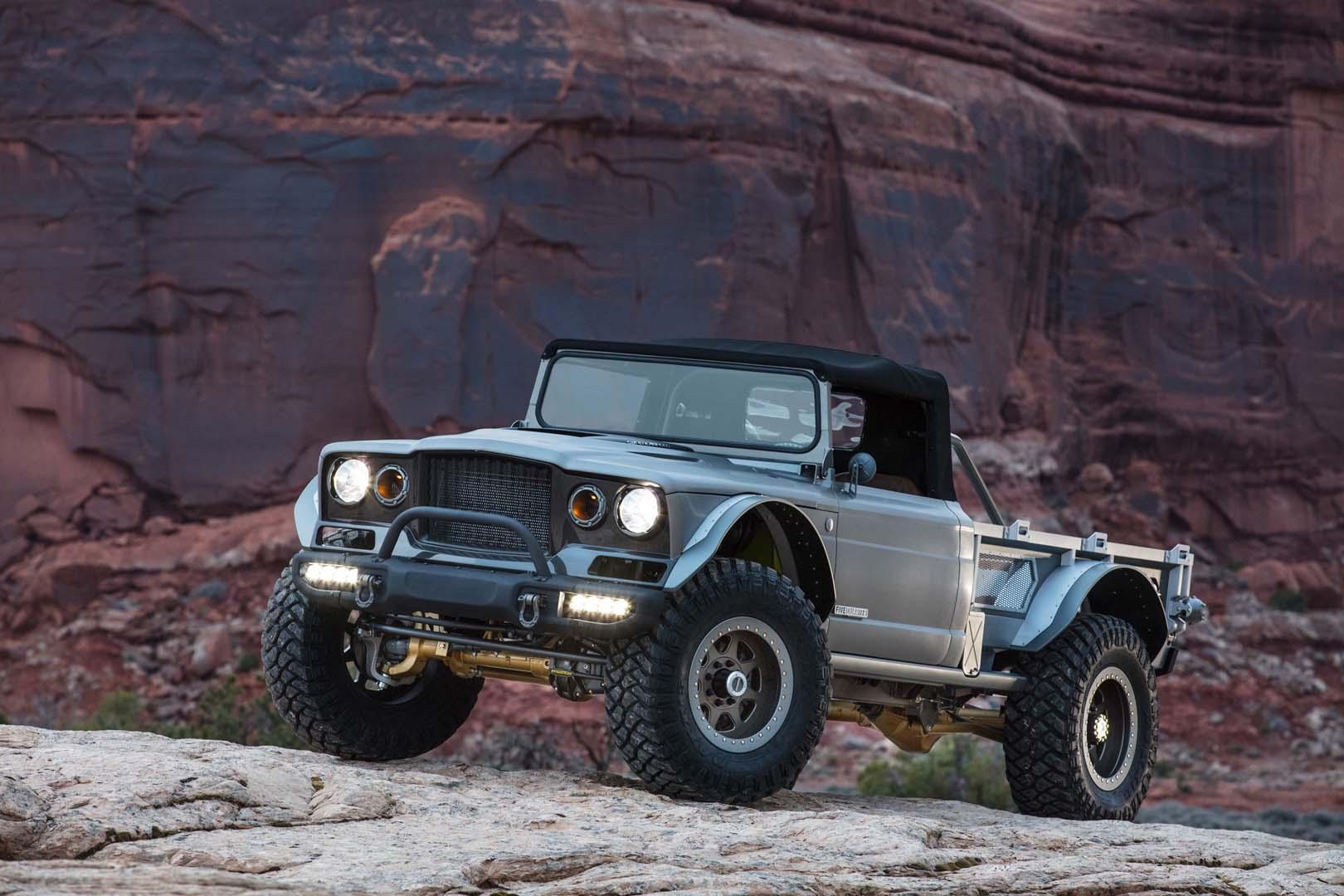 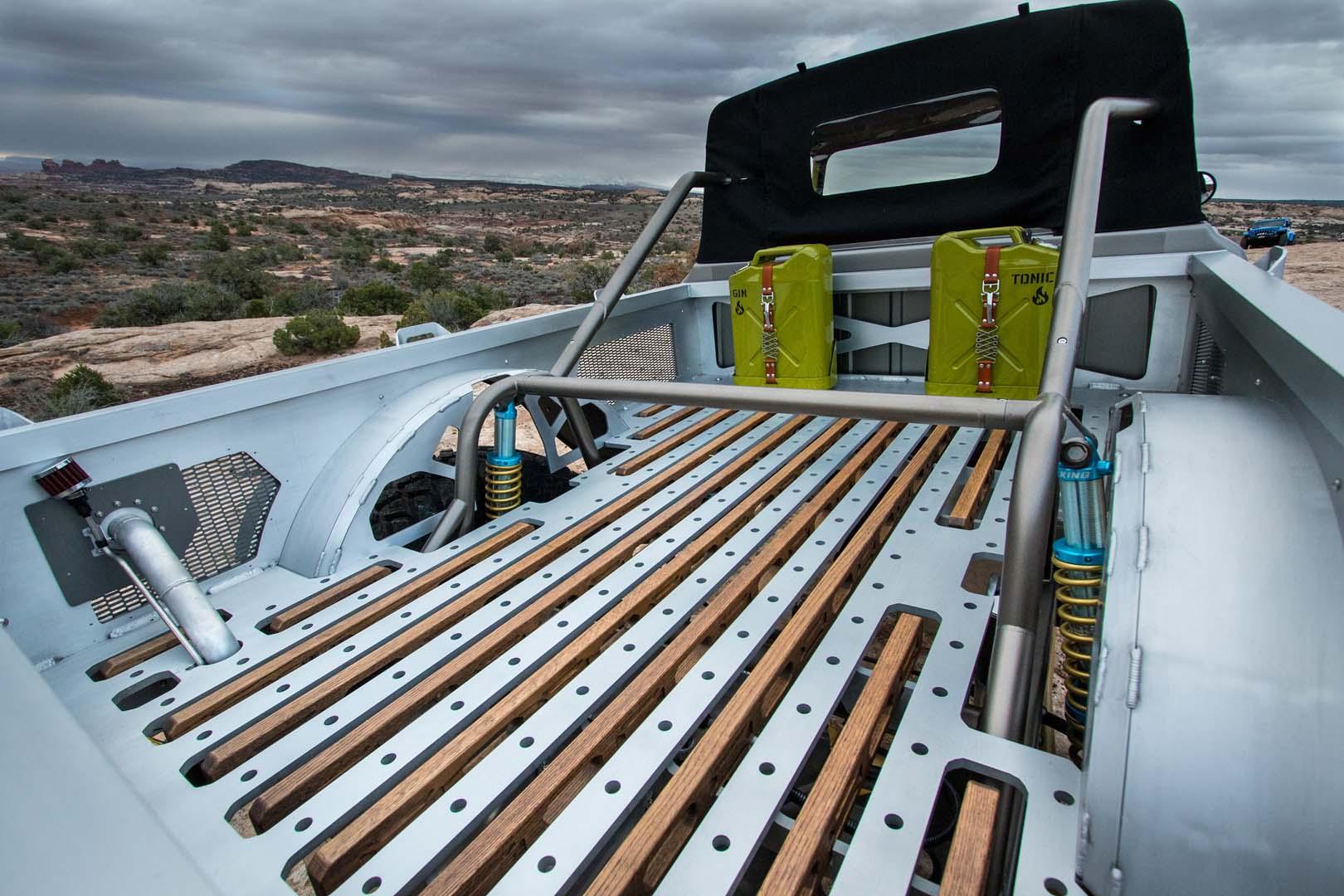 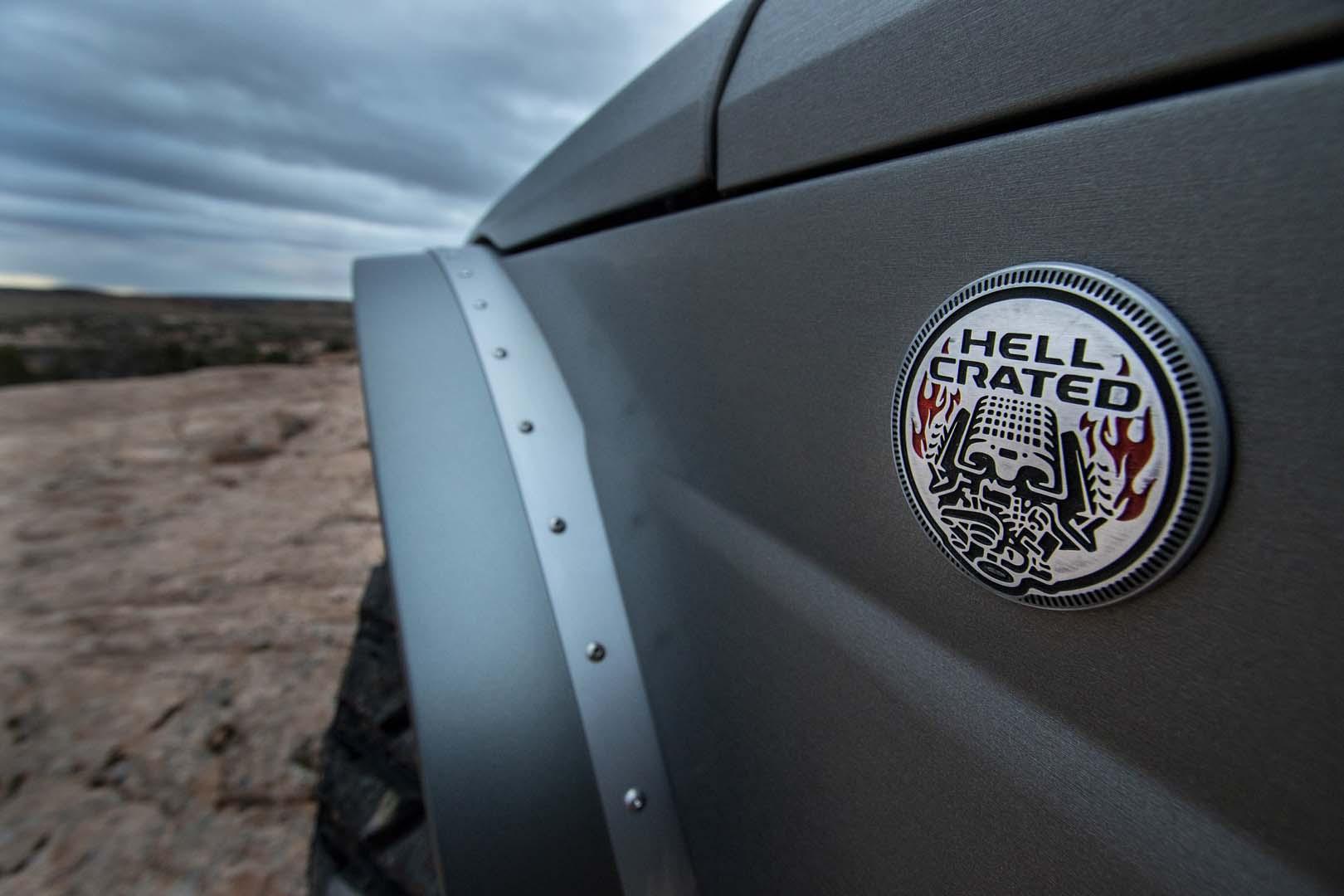 The sixth Jeep Safari concept this year was certainly the wildest, with a high-performance engine and wild rear-end treatment.

Based on a 1968 M-715 (a Gladiator-based military vehicle), the M-715 Five-Quarter concept takes its title from the nickname for Jeep trucks of the past that were one-and-one-quarter ton capacity - or “five quarters”.
Externally, the M-715’s original front sheet metal was removed and a full carbon-fibre front end fitted in its place. An all-new, custom-fabricated 6-foot (1.83m) aluminium bed was installed, then perforated and re-imaged using a mix of waterjet-cut panels and wood slats.

A subtle touch here that escaped most people’s attention was the jerry cans fastened to the tray area that bore ‘gin’ and ‘tonic’ labels!

Additional body modifications included a 3.5-inch chop to the convertible soft-top. To protect the body, the original rockers were removed and replaced with functional rock rails that run the length of the sides. A modified Gladiator Rubicon front steel bumper was installed and painted to complement the brushed metal-finish on the body and tailgate.
Headlights have been replaced with new HID lights along with LED auxiliary lights. At the rear, LED halo lights have been installed in the original taillight buckets.
The M-715 Five-Quarter’s off-road capability has been enhanced by reinforcing the original frame and replacing the leaf springs with a heavy-duty link/coil suspension system. Additionally, the front axle has been pulled forward two inches and replaced with a Dynatrac Pro-rock 60 front axle and a Dynatrac Pro-rock 80 axle in the rear, while 20-inch beadlock wheels have been wrapped with large 40-inch Maxxis tyres.
Inside, the Five-Quarter was modernised with new Jeep Wrangler seats, sans headrests, with water-jetted aluminium components used to make a new instrument panel and door cards.

A vintage 8-71 supercharger was repurposed to hold the transmission and transfer case shifters, while the floors were bedlined for enhanced durability.
Under the tilt-style front end, there’s a 6.2-litre supercharged “Hellcrate” HEMI V-8 engine, which produces more than 700hp (520kW+).

Hinting at that supercharged powerplant, Jeep reconfigured their ‘Trail Rated’ badge, used for their most extreme production off-roaders, to say ‘Hell Crated’ for this concept! 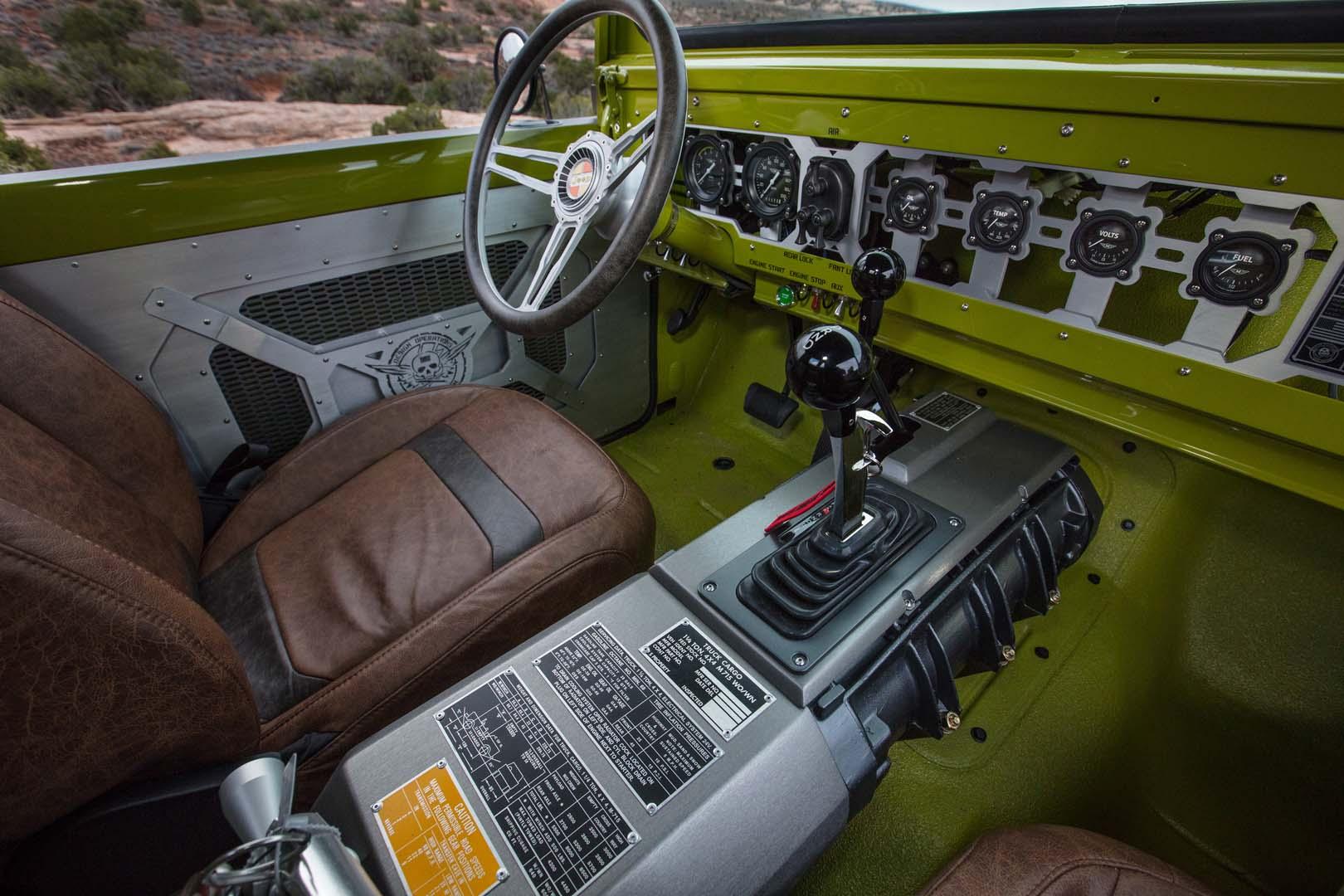 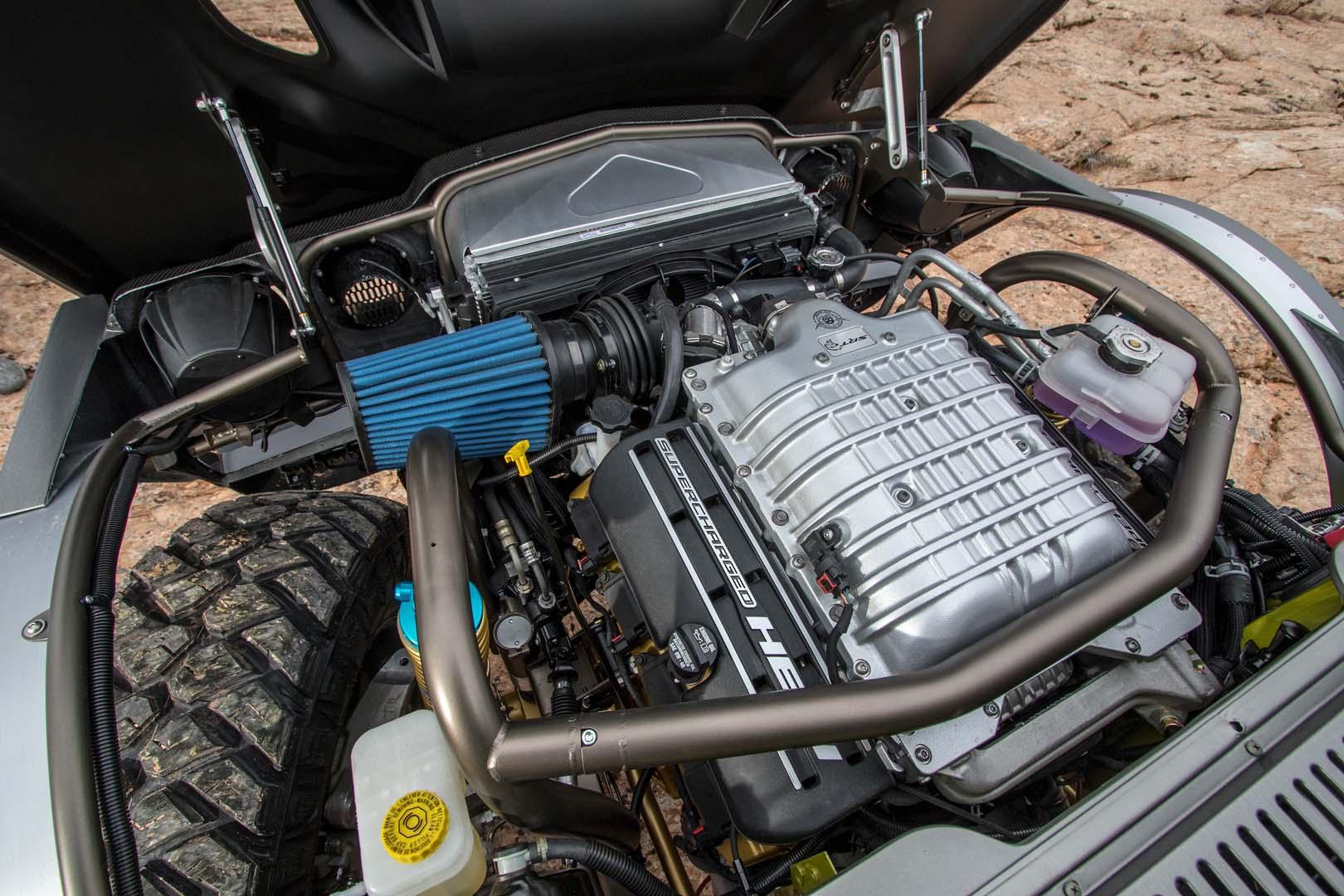 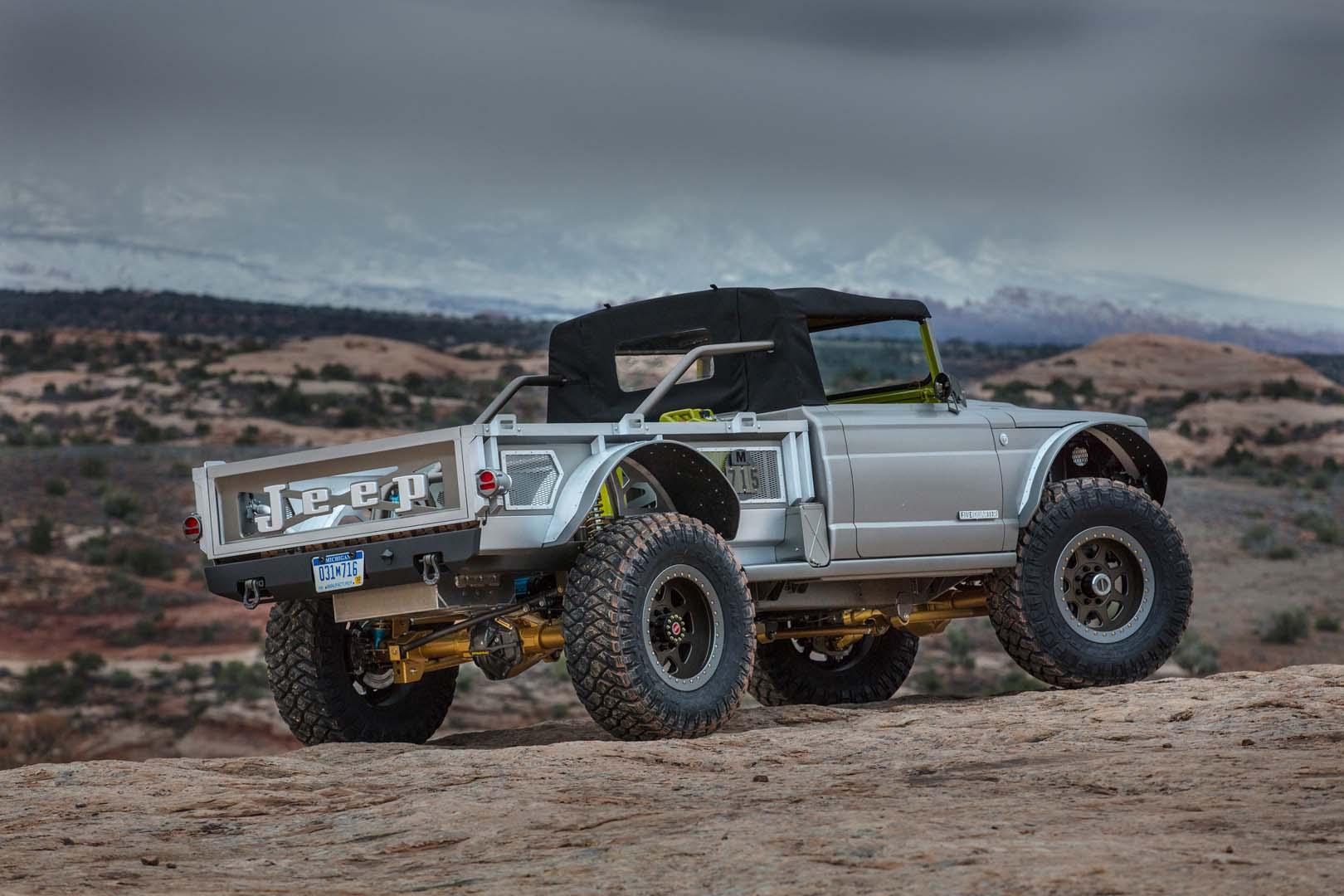 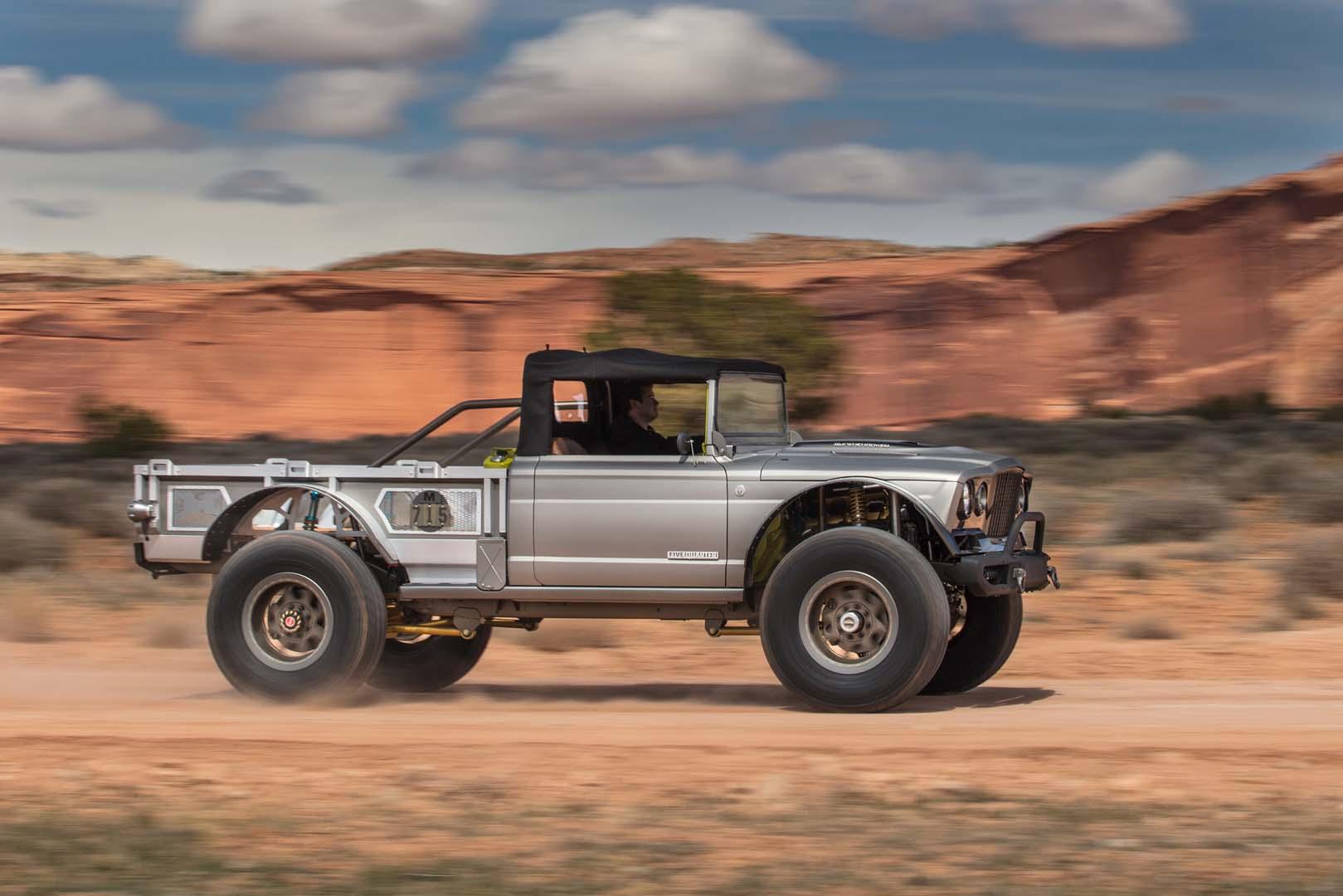 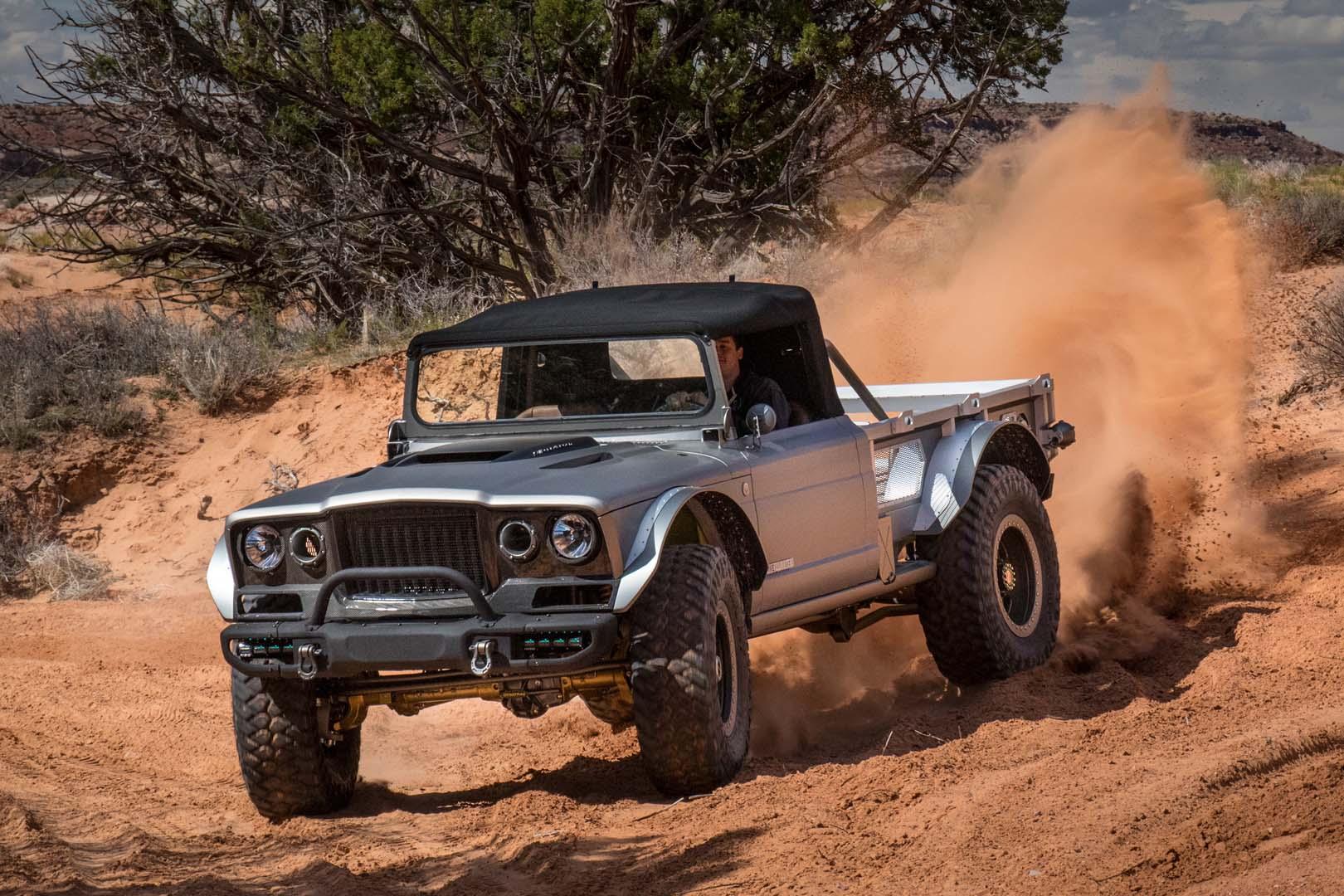 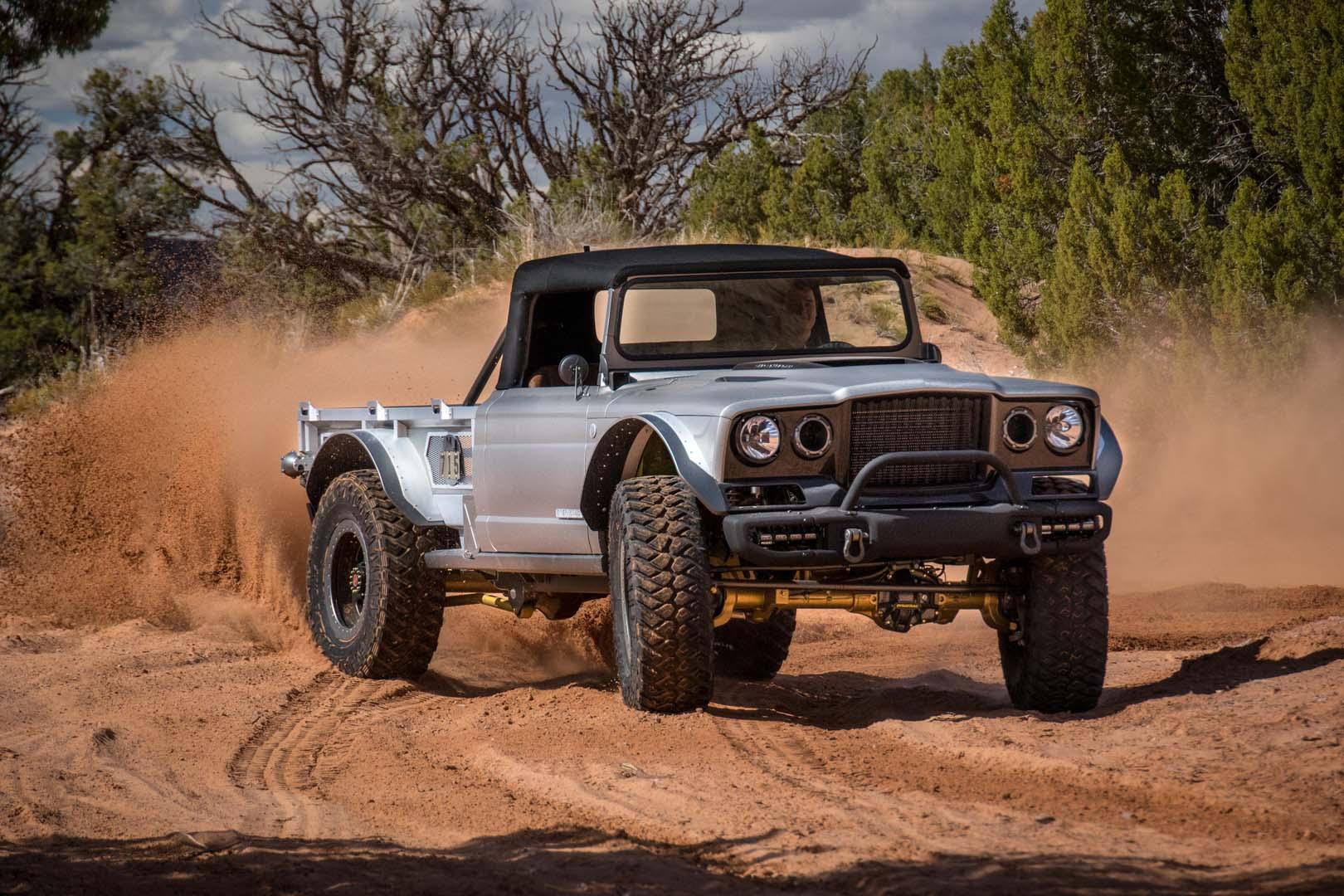