Lambo does SUV.A bonkers-fast and striking-looking SUV. Successfully uses lots of technology for handling, luxury and capability. But that's tech it gets because it's basically a re-shelled Porsche-Bentley co-op product, so it doesn't feel as distinct as it looks.

Words by Paul Horrell via practicalmotoring.com.au

Like pretty well all the other sports-car makers, Lamborghini knows its traditional sports-car market isn't growing very fast. Whereas SUV sales worldwide are catapulting ahead. So Lamborghini has tried to put its own character into an SUV. Loud, fast, and crazy-looking in other words… 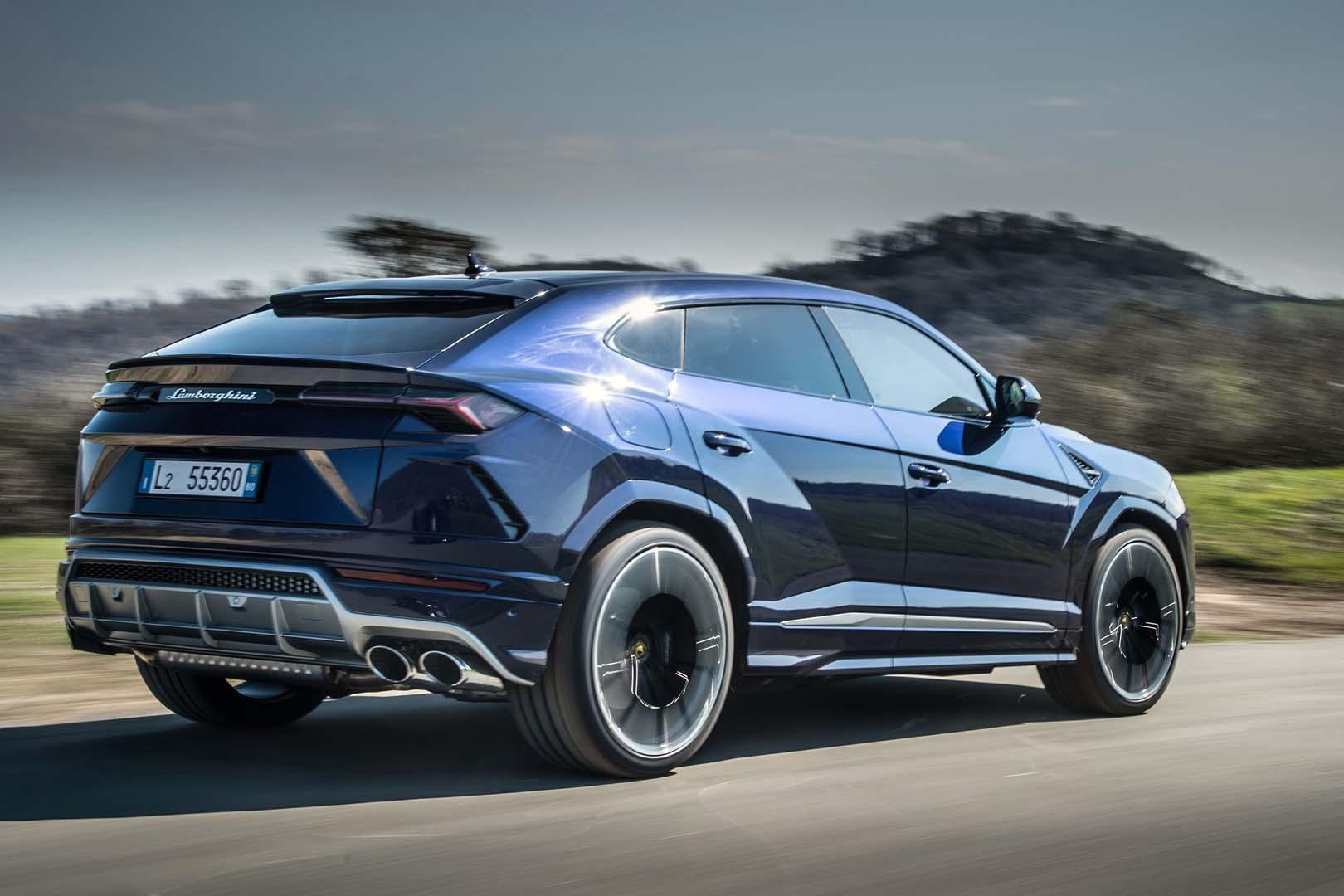 What is the Lamborghini Urus?

If the Italians were acting alone this would be an impossible job, as they're too small a business with too few engineers. But they're actually a part of the VW Group, so they have access to the big SUV platform also employed by Bentley (Bentayga), Porsche (Cayenne), Audi (Q7, Q8) and VW (Toureg).

Lambo has used the most top-end spec of all the components available in the platform – a V8 twin-turbo engine, air suspension with adaptive damping, active anti-roll, and four-wheel steering. Only by using those adaptive elements can it square the apparently impossible triangle of acting like a truck one minute, a limo the next and a sports car in between.

In fact, the Urus goes even further than the Bentley or Porsche in the exotic-tech stakes. It has more power to get it moving and bigger carbon-ceramic brakes to get it stopping. To get it cornering, it has extra-aggressive torque distribution through its diffs, and more use of lightweight materials in the body and chassis.

That body draws attention to itself through a sloped roofline, not dissimilar to a BMW X6, but mostly by a network of crease lines all over every panel. Some of them, from certain angles, make the thing look like it's been in a ding. Vast wheels (optionally 23-inch with 335-section rear tyres) and colossal air intakes also add to the visual impact. The shape of the wheel-arches recalls the Countach. See the thing in the metal and its sheer width adds to the impression that the driver isn't expecting to be messed with.

Everywhere you look, things have been fashioned into hexagons. And where not hexagon-shaped, they usually have a hexagon motif stitched or moulded in. It's a Lamborghini thing.

For an SUV, the seats aren't set that high, because the roof line is comparatively low – a fact back-seat passengers will always be aware of. Even so, the front seats feel pretty commanding.

Those chairs adjust electrically 12 ways. Mind you the test car had the optional 18-way jobs, with heating, cooling and massage. It will take a while to get them set-up to suit your body, but that done then the support will be gripping and the comfort blissful.

A four-seat package gives a pair of rear chairs themselves electrically adjustable and a console between them. In that case the rear bulkhead doesn't fold, so the utility is eroded. The boot is 616 litres. The other rear option is a conventional split-fold bench. There's full split-zone climate control in the back too.

All the info comes via screens. The driver gets a reconfigurable driver instrument binnacle plus a very comprehensive if optional HUD. The passenger shares a main centre infotainment screen, plus the one below for climate and seats. 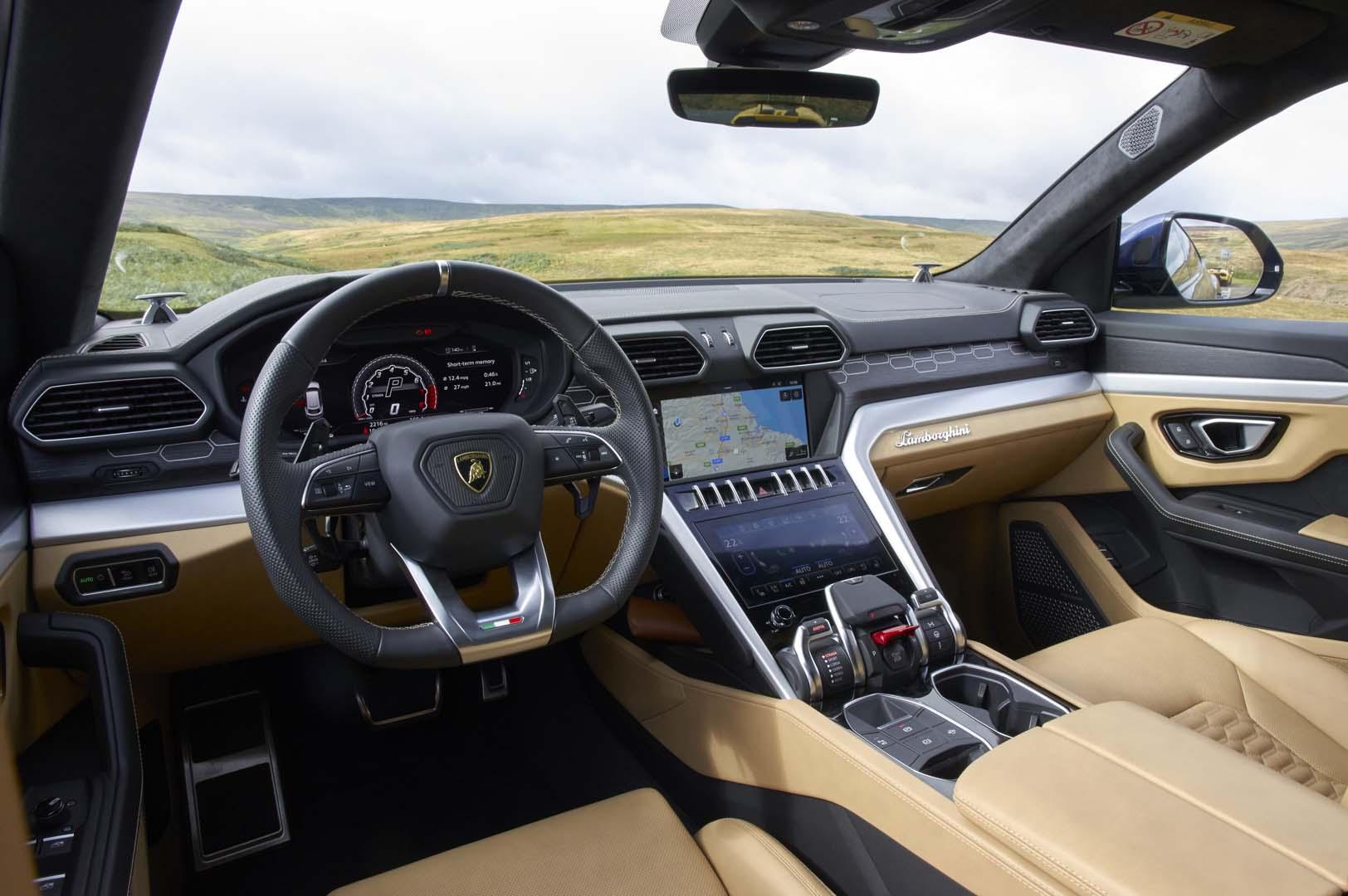 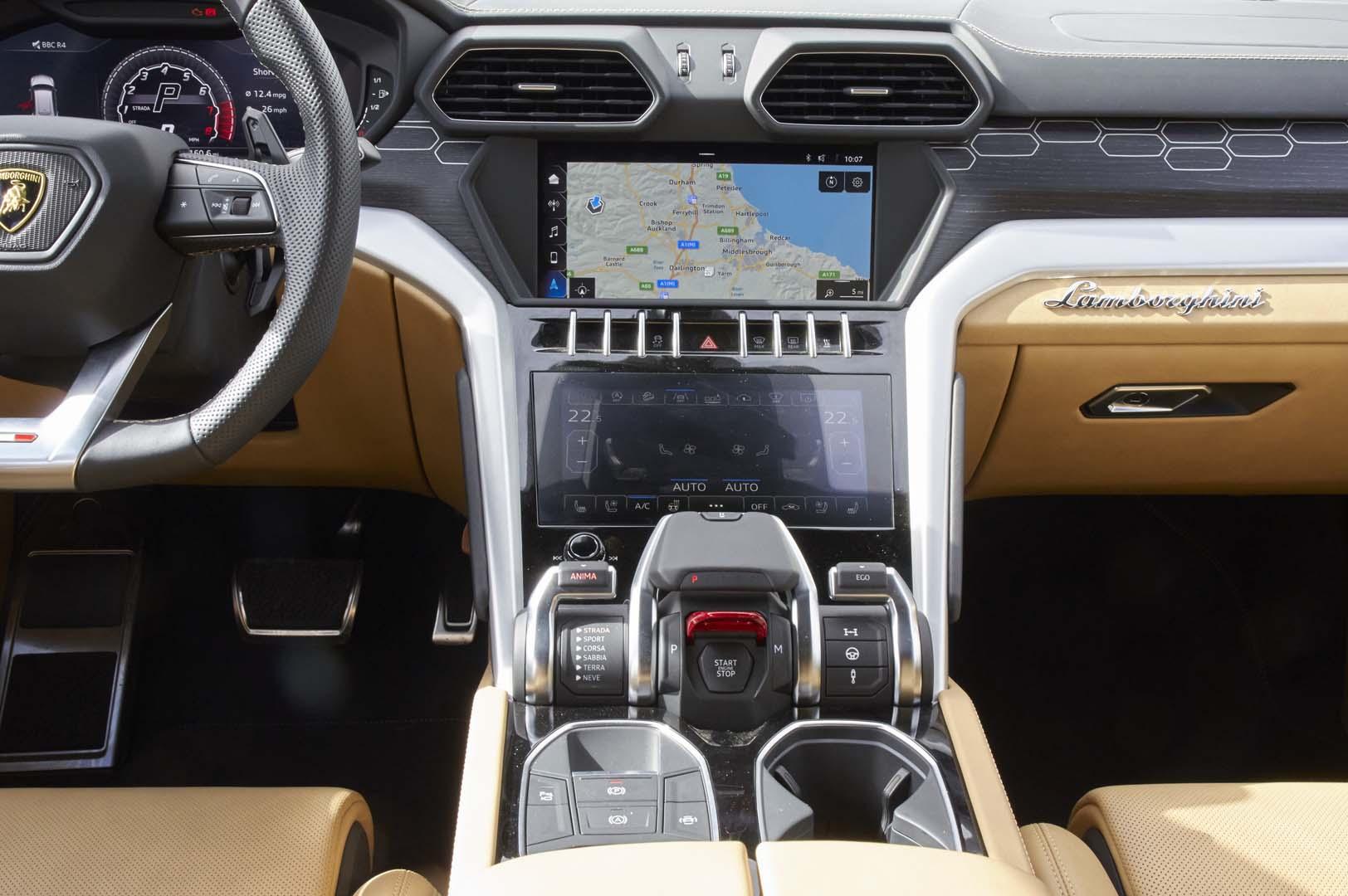 Either side of the central start button are controls for the modes – you can switch powertrain, steering and damping into separate steps of aggression (three levels each). Or you can drop all the car's systems into modes for strada (road) sport (er, sport), corsa (race), sabbia (sand), terra (dirt) or neve (snow). Those off-road modes come only with the off-road pack, which also includes underbody protection.

There's endless choice of leather and trim. The tester had a light tan leather, in nice Italian tradition, and dark stained matte wood. You wouldn't expect to find wood in a Lambo, so you can have carbonfibre. But the lumber actually looks very smart, whereas carbonfibre seems fake as its weight-saving effect would be miniscule and its structural effect zero. 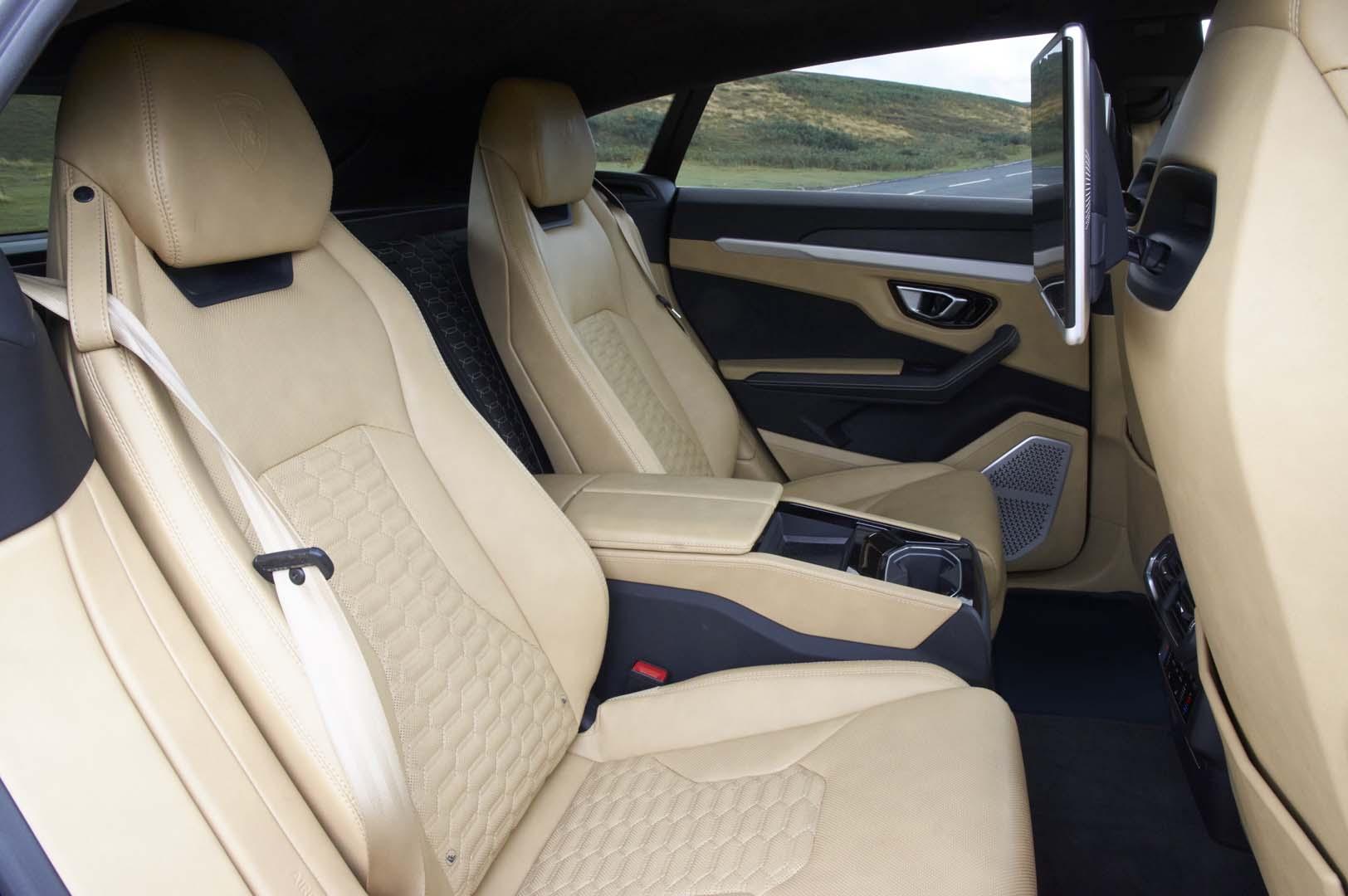 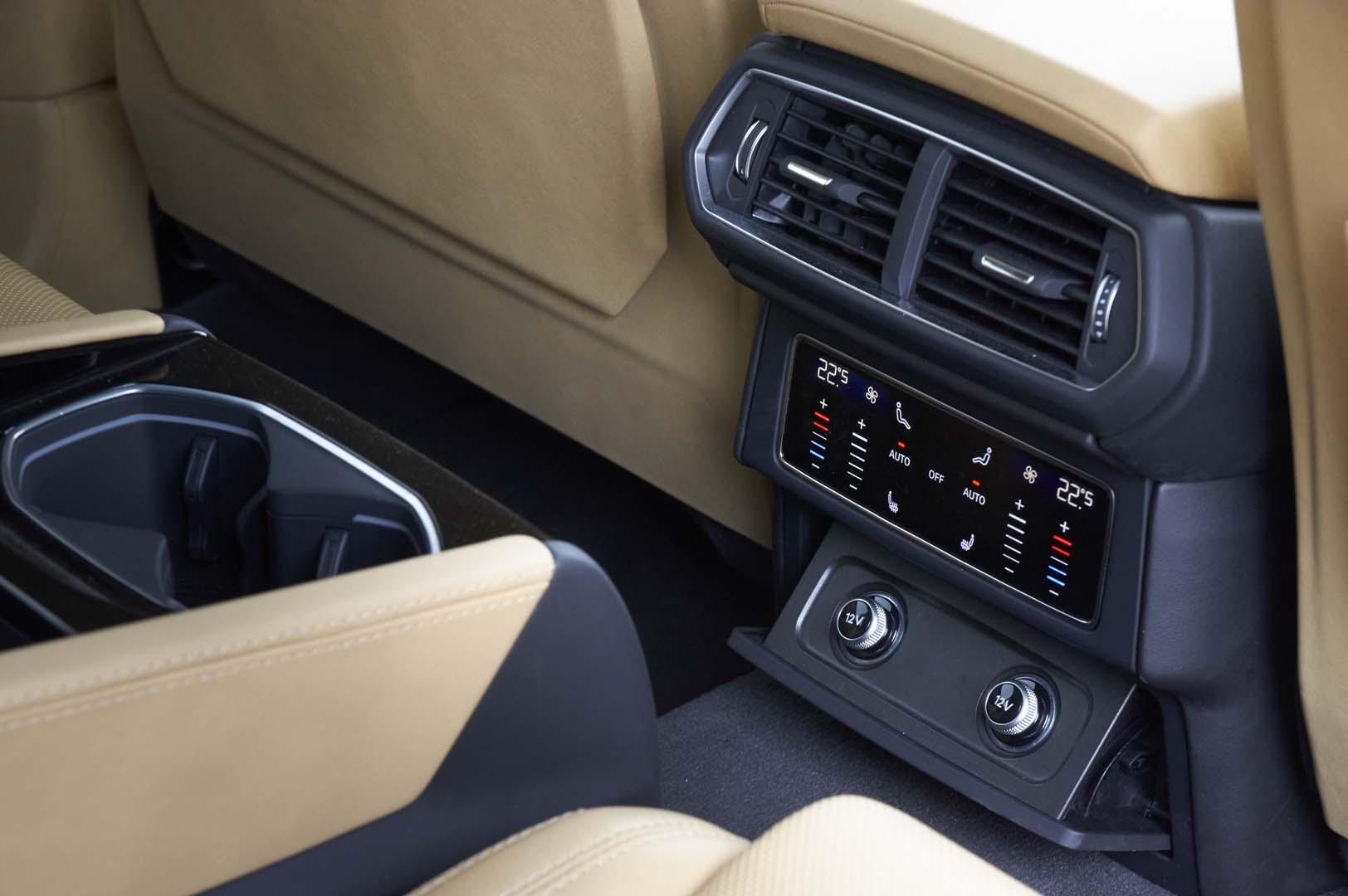 Lamborghini's hex-heavy graphics are skinned over the top, but the underlying system is Audi's top-end job, which is fine. The two touchscreens have very high resolution and rapid response. They're 'haptic' too: your finger feels a slight click as they confirm an input, so there's no need for an annoying beep.

The climate screen has a dual role: it becomes a handwriting recognition pad for navigation inputs. Works very smoothly. But that's all the lower screen can do. It's not as versatile as the lower screen on the newest Range Rovers, which provides quick access to configuring the off-road modes and other stuff.

The car's connections give good traffic coverage and search apps. It's also got all the wired and wireless connections your devices could want, and has neatly integrated Apple CarPlay and Android Auto. The hi-fi is by Bang & Olufsen. Among the 21 speakers, a pair of tweeters rise on motors from the dash-top when you turn the car on. It's got loads of power and a spacious image, but the treble is a bit harsh and tiring.

The test-car had rear-seat entertainment screens too, a pair of versatile tablets mounted on the back of the front seats. 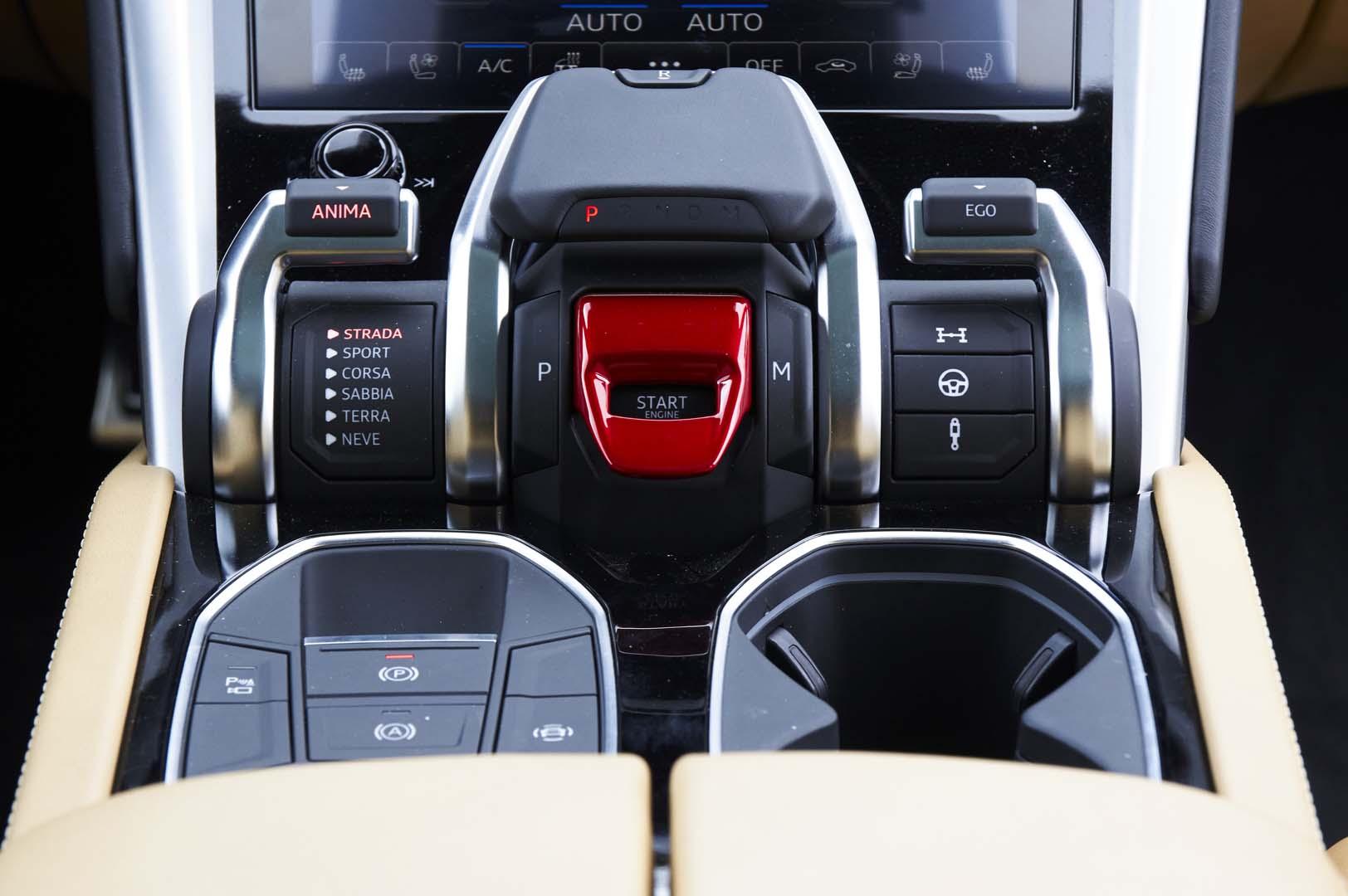 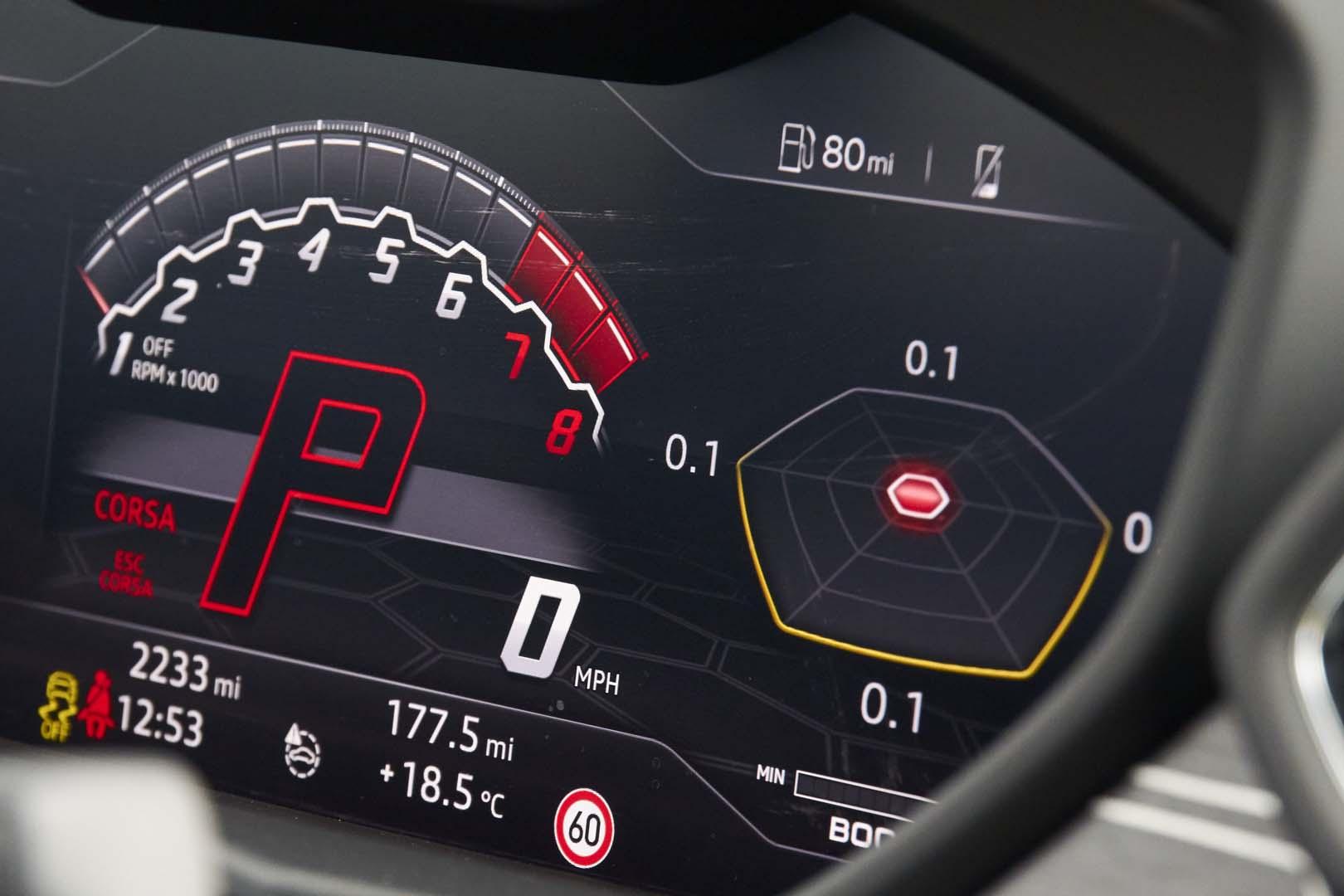 Drop the Urus off a cliff and it'd hardly accelerate faster than it will on the level. The brutal kick of 478kW feels fit to roll up the roadway like a carpet beneath it. Mash the pedal like that and you get a deep chest-collapsing pummel of exhaust noise echoing across a couple of LGAs behind you. Plus, on the over-run, a load of pops and bangs have been engineered in. It's not the usual screaming Lambo noise, more of a generic V8 turbo job, but it sure makes itself felt.

That thunder comes when the exhaust system opens its silencing valves, but mostly they stay shut, and the over-run racket goes away, to make the thing more relaxing and less antisocial. If you really must announce your presence, you can hit a button on the console and break out the heavy metal gig even at low speed.

The engine doesn't show much turbo lag, and the immense mid-rev torque – 850Nm of it, to save you scrolling back up to spec table above – makes the Urus squirt forward without having to drop gears. It'll pull hard beyond the red line, but the limiter is a relatively unexciting 6800rpm.

The brakes are the world's biggest carbon rotors, so there's absolutely no question they're well up to track use or running heavy loads.

The chassis does a mind-altering job of an interesting but difficult road. It's the combination of tech that does it. Active anti-roll bars soften off to keep it smooth on straights, but can almost cancel out roll in corners. An active rear diff sends power to the outer tyre. Four-wheel steering helps the agility into slow corners (when the rears steer in the opposite direction to the fronts) but keeps things stable (by steering slightly crabwise) at high speed. The air suspension lowers at speed too, to firm the springing and drop the c of g.

So it'll warp its way around corners, swallow bumps without getting deflected off course, and even edge its tail out rather than noticeably understeer. The way it'll blast itself out of a corner is spooky.

If you like sheer speed, the Urus will entrance you. If you're amused by the surprise of that performance in a bulky SUV, it'll tickle you no end.

But if your idea of driving fast is the joy of feedback and interaction, well you'd better spend your $$$ elsewhere. The steering is always numb, the brake pedal trustworthy but a mite soggy, the seat-of-the-pants feel pretty much lacking.

Still, the Urus's life story isn't going to be this sort of 25L/100km driving. Mostly it's going to be the city and the cruise. In town, it's superb, except for the width. For a start it has wonderful parking cameras, and the four-wheel-steering bestows tight turns.

On the cruise, the steering is really well calibrated and the ride decent, and those giant tyres kick up less noise than you'd think. Distances pass with tiny effort.

It largely depends on the tyres, and you can get it with winters or all-terrain spec rubber.

Beyond that, the air suspension allows raised clearance (Lambo quotes 248mm) and the underbody protection should see off gentle incursions in the landscape.

There's no low box, but the torque of the V8 will pull a house uphill anyway.  Going down, you've got to rely on hill descent control.

Unsurprisingly ANCAP hasn't crashed one. But we do have tests for some of its relatives and the results are encouraging. The latest Porsche Cayenne got 95 percent for adult safety and 80 for child.

The list of the Urus's safety and assistance systems, standard or optional, is far longer than you'd expect from a manufacturer that used to style itself the most politically incorrect carmaker in the world.

The Urus has full lane-keeping, and radar cruise, so it'll take all the load off you on a highway. For Pete's sake don't look away though. It's also got effective collision-mitigation braking.

Headlights are LED matrix, the head-up display keeps your eyes on the road. Multi-view cameras and sonar are your friends for parking (just as well, as rearward visibility is pitiful).

The test car even had night-vision, though its display is small and takes your eyes down to the instrument display, which isn't ideal. 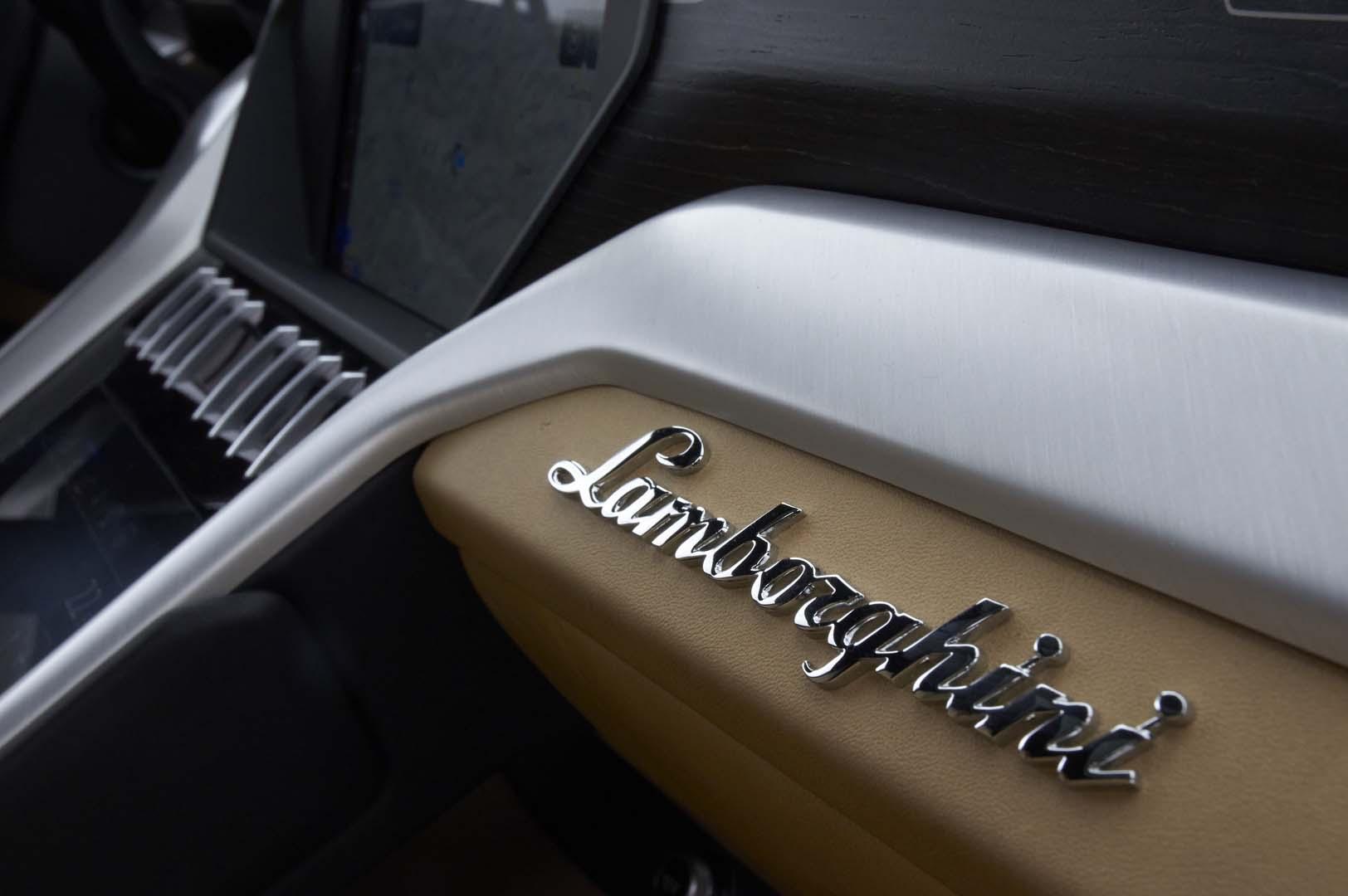 So, what do we think?

Lamborghini set out to make the supercar of SUVs. So we must in part judge it on their own terms. Sadly, it's proof of the impossibility of that aim. Sure it's ridiculously quick, but it doesn't provide the intimacy and visceral connection you'd want from a supercar.

Still, that tarmac-destroying speed can't be overlooked. And to find it in a package that'll also provide immense practicality and luxury and equipment is quite a feat. Count up the number of boxes the Urus ticks, and the sheer boldness of those ticks, and it actually looks a bit of a bargain. 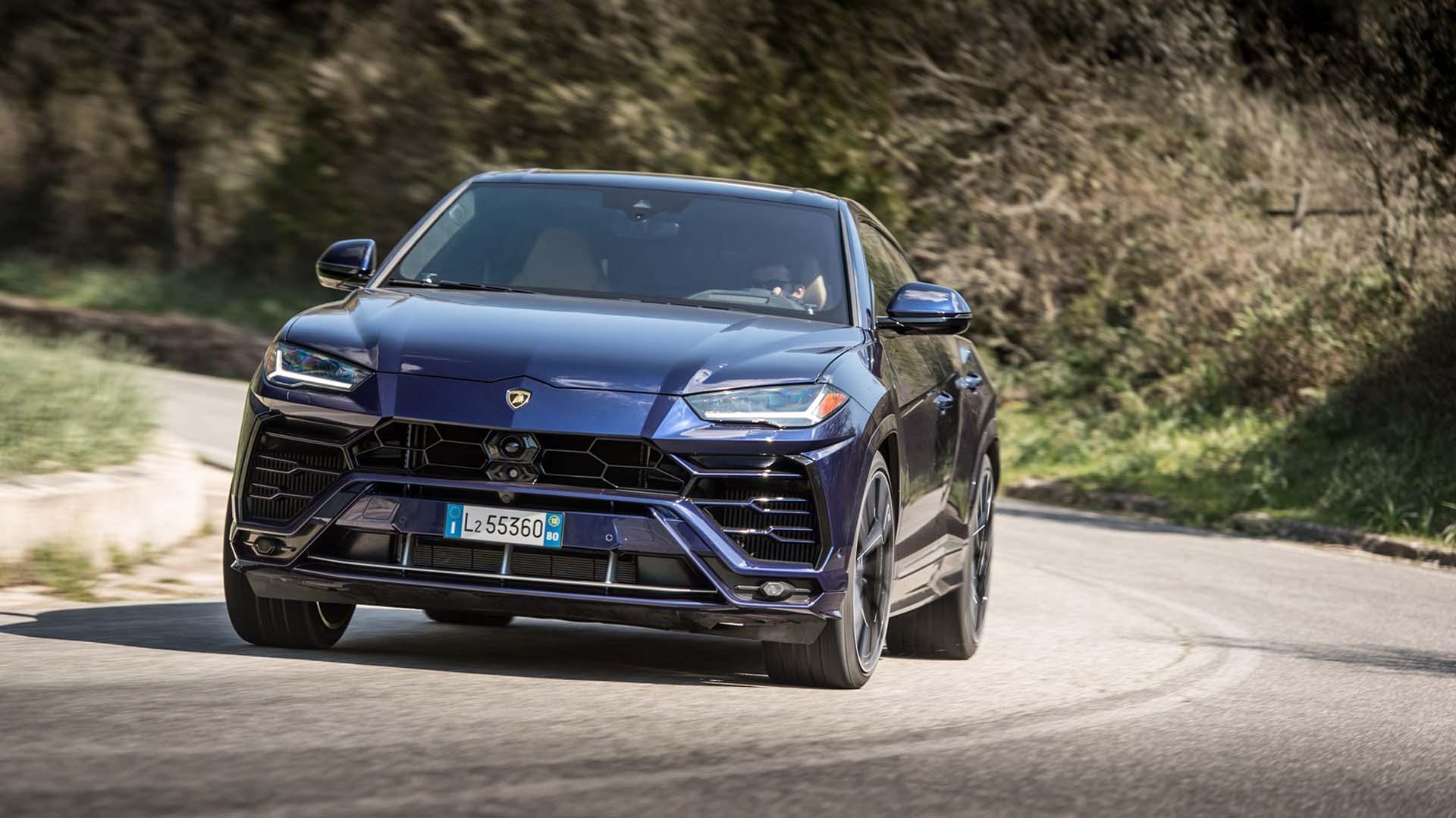