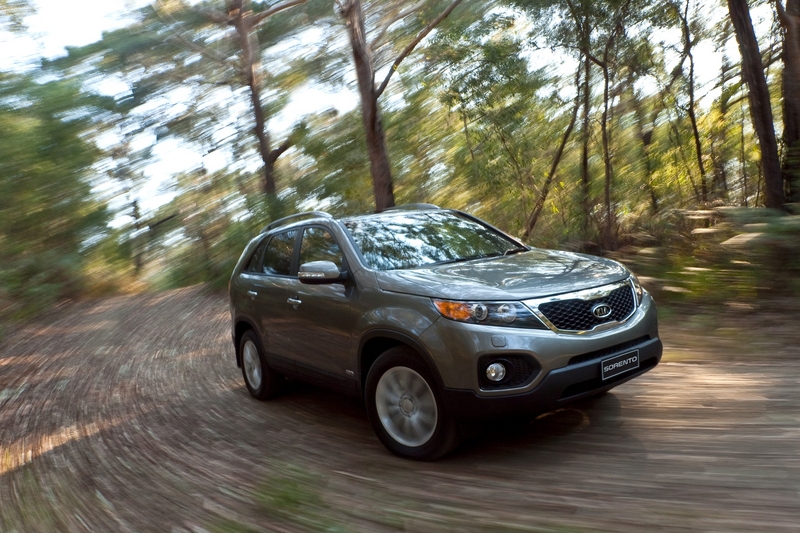 Today's Kia's are modern and stylish, well built and comfortable, and incorporate many features that not so long ago would only have been found in a European built car, at a price tag far greater.
While the super stylish Sportage has won acclaim in the compact 4x4 market, its bigger sibling, the Sorento is an equally impressive vehicle that helped raise the company profile when it first arrived in Australia in 2003. So much so that more than 10,000 Sorentos have since found homes locally. The second generation Sorento arrived here in 2009 and brought substantial improvements across the board. Since then Sorento has been refreshed in both 2011 and 2012, bringing greater value to the range.
The Sorento comes in three models - Si, SLi and Platinum - all seven seater wagons. Our test vehicle was an SLi powered by a 2.2-litre turbo-diesel.
Sorento is available with either a 3.5-litre V6 petrol or 2.2-litre 4-cylinder common rail turbo-diesel. So popular is the diesel that the V 6 petrol is only available in the entry-level Si, which is also available with the diesel, which is the only choice with the mid-spec SLi and range-topping Platinum.
The engine is the result of extensive development that saw no less than 500 prototypes tested. It uses Bosch common-rail direct injection and an electrical variable geometry turbocharger. It produces 145kW of power at 3800rpm and an impressive 422Nm when matched to the six-speed manual transmission or 436Nm in the auto.
The standard transmission is a six-speed manual, which is available depending on model with sequential sport shift auto or with all-wheel drive (part time with lock mode). The 4WD system delivers 100 percent of torque to the front wheels under normal highway use, with torque automatically distributed to the rear when grip is lost at either front wheel. For increased safety - and traction - in slippery conditions or modest off road conditions, the driver can select 'Lock' mode that splits the torque 50/50 between the front and rear axles at speeds up to 30km/h. Other useful traction devices are hill start assist and downhill brake control that limits vehicle speed to 8km/h during steep descents.
Like the Kia Sportage the Sorento has a sleek and alluring body. It is longer and wider than its predecessor, with sharp styling highlights. It uses monocoque construction, all independent multi-link suspension at the rear and MacPherson strut at the front, with automatic self-levelling available on diesel models. The manual diesel Sorento has a braked towing capacity of 2500kgs, which drops to 2000kgs for the auto model.
Stopping power is delivered with an all disc braking system, along with ABS and electronic brakeforce distribution and brake assist.
The Sorento - across all models - is highly specified with standard equipment including seating for seven, 6-way power drivers seat, cruise control with steering wheel mounted controls, leather wrapped steering wheel, 6 function trip computer, digital clock, power windows and mirrors, interior lights front and rear, 2 x 12 volt power outlets and keyless entry. All models have dual zone air-conditioning and second and third row vents.
On the audio front there is an MP3 compatible AM/FM/CD system with power bass, six speakers and iPod compatibility aux inputs, steering wheel mounted audio and Bluetooth controls.
Also standard are a 60:40 flat fold second row seat, 50:50 fold flat third row seat and rear cargo cover. There are also 4 cup holders, 4 bottle holders, map pockets in front and rear doors, glovebox, centre console storage and under floor storage compartment,
Safety also rates well with six airbags - dual front, side and curtain as standard.
Step up to the SLi spec and you add reverse parking sensors and rear view camera with mirror display. Front window auto up and down function, alloy sport pedals, 18-inch alloys, leather seats, 8-way power adjustable drivers seat, auto headlights and door mood lights. The SLi also gains roof rails, rear spoiler, LED rear combination lights and aero-blade wipers.
The latest enhancements to the Sorento include Bluetooth technology providing hands-free mobile phone connectivity and media streaming, all operated through steering wheel mounted controls and a headlamp escort function where low beam illuminates the ground in front of the car at night after it has been turned off.
The SLi received upgraded in-mirror display rear view camera offering a higher resolution image and parking guide lines, a leather wrapped instrument cluster housing and the front passenger window is now automatic both up and down with a built-in safety function.
The Platinum model adds a large power panoramic sunroof, push button starting, privacy glass, HID front headlights with washers and a six-CD player, an external amplifier, a centre speaker and sub-woofer.
The turbo-diesel Sorento is a great touring machine, returning a sub-10L/100kms fuel consumption. There is a slight initial acceleration lag, but this soon passes, and once at highway speeds there is little to indicate you are driving a diesel. There is no diesel engine 'clutter' and right foot response can't be faulted. While our vehicle was equipped with sequential shift mode transmission, left in auto mode the transmission is that good, that there was little advantage to be gained manually selecting gears. In auto mode gear changes are well sorted to engine speed and the engineers have done a great job in calibrating the gears with the diesel engine.
The cabin is a pleasant environment with power adjustable and height adjustable driver's seat, excellent forward vision and reach and tilt adjustable steering column means the driver can find his perfect driving position.
The dash is a little on the plastic side, but leather seats and armrests provide well styling contrast. 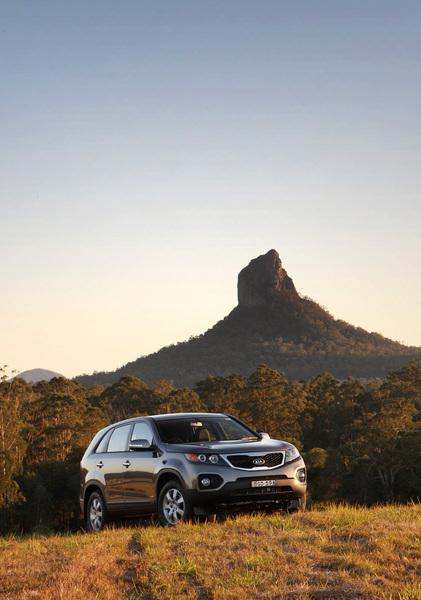 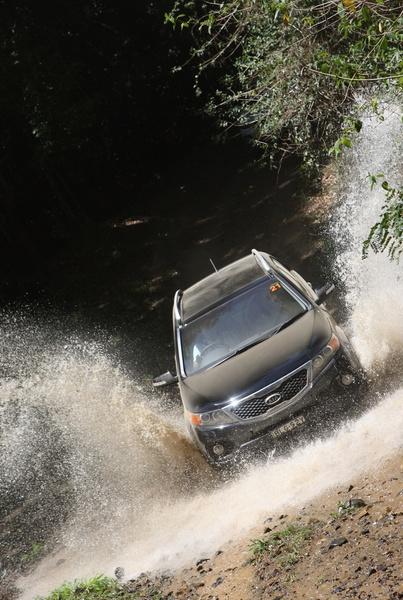 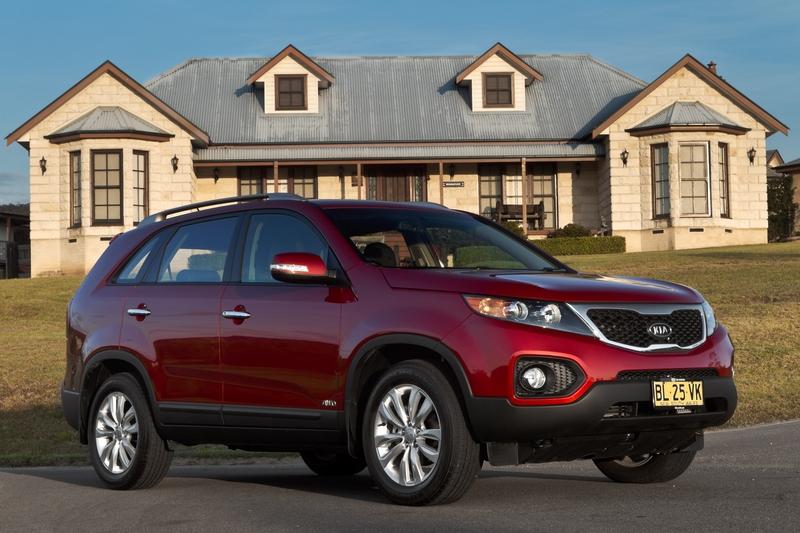 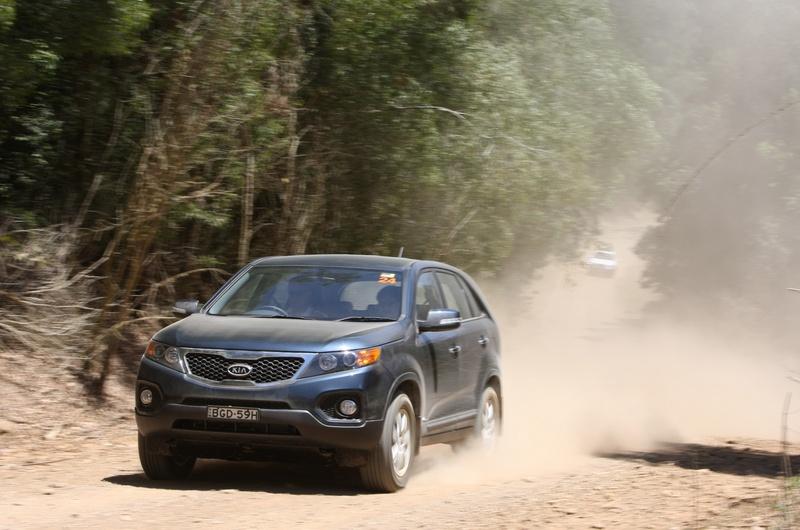 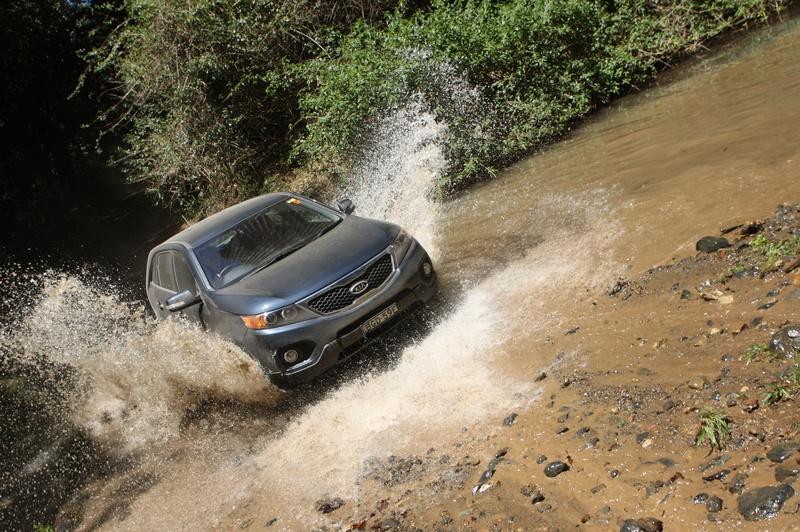