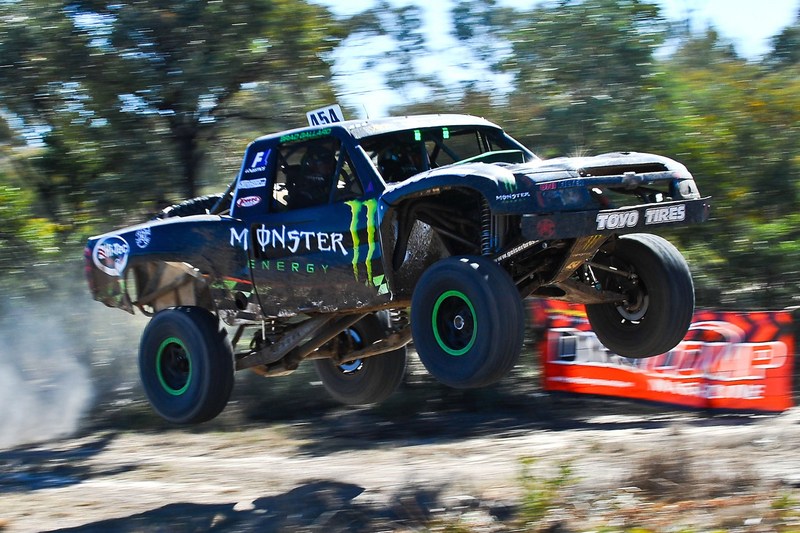 After five 80km laps of Goondiwindi's suspension-pounding whoops and melon holes, victory went the way of the South Australian team of Brad Gallard and Scott Modistach, who scored their first ever AORC victory at Goondiwindi.
A new date for the Albins Offroad Gear Goondiwindi 400 paid off in 2012, with dry conditions and a fast, but challenging track greeting the starters for round 2 of the 2012 Australian Offroad Championship over the weekend of August 4 - 5.

After five 80km laps of Goondiwindi's suspension-pounding whoops and melon holes, victory went the way of the South Australian team of Brad Gallard and Scott Modistach, who scored their first ever AORC victory at Goondiwindi.

Already pumped from his recent Finke Desert Race win, Gallard unleashed the #454 Monster Energy Geiser Bros V8 Trophy Truck, and streaked to victory on what's regarded as one of the toughest circuits on the AORC calendar. After battling with Bryce Chapman's #58 Runamuck Jimco early in the race, Gallard took the lead at the start of lap 3 when Chapman pitted with a flat tyre. From this point, the SA duo didn't look back, greeting the chequered flag, waved by Goondiwindi Mayor Graham Schieu, in a time of 4hrs 11min 40sec to take their maiden AORC round victory at the 400km race.

Second outright were the local favourites, Joe Bulmer and Aaron Lewis who worked their way through the field of 69 entrants in their V8-powered Jimco buggy. The Goondiwindi-based team leapt from 16th on the starting grid to second outright at the finish, 14 min 22 sec behind Gallard's V8 Trophy Truck.

Relative newcomers to the sport, Dan Bonnor and Justin Montesalvo were another Queensland team that impressed, finishing third overall. Starting just ahead of Bulmer in 15th after Saturday's prologue, Bonnor drew on his motorcross background to whip through the savage terrain and nail down third outright in the V8-powered #954 GET Performance race car.

Gerald Reid and Aaron Saliba continued the dominance of V8 power at Goondiwindi, locking down fourth outright in their sweet-sounding #39 Later Engineering Pro Buggy. Settling into fifth outright, and first turbo car to greet the chequered flag, was Team Taylors #6 GET Performance race car. Fresh off the water from the USA, Nev Taylor took the wheel for the opening lap on Saturday before handing the keys over the US-based offroad racing star Harley Letner for Sunday's first two laps. Nev then jumped back into the driver's seat to close the race out, finishing in a time of 4:35:57

Sixth overall was Les Marshall and Glenys Rose in the #105 VQ35 Nissan-powered Jimco. Marshall/Rose's breakthrough Prolite class victory came in the final two lap section when podium contender Matt Owen retired. In the Super 1650 class, Jared Melville set the pace early, but reigning class champs Darryl Smith and Michael Matthews in the #201 Alumicraft continued to dominate the category, taking the win and finishing seventh overall. Three minutes behind Smith was the #245 Cougar Super 1650 of Russell and Judy Hartnett, which was the first beam car across the finish line.

Ahead of the runoff of the Extreme 4WD Class machines at Goondiwindi, Raana Horan and Michael Connor looked set to pick up where they left off at SeaLake. After putting the 4WD Titan into eighth on the starting grid, the New Zealand pair suffered a rollover in the melon holes on Sunday morning, which forced an unscheduled pitstop and a conservative approach for the remainder of the race.

With the Kiwis out, Sandy Bowman and Daniel Hardman took the class win and ninth overall in their #833 V8 GQ Patrol. At the finish, Bowman/Hardman took a comfortable 30 minute win from Horan/Connor. Third in Extreme 4WD went to the mother and daughter team of Leila and Larissa Chapman in their turbo Pajero.

Consistency proved to be the key for Evan Burns and the McKays in the Production 4WD class. After Burns, Topfer, Chapman and Gardner all went toe to toe early, the team in the #789 short wheelbased Pajero won the class by just over a minute from the #722 Pajero of Michael and Linda Topfer. Rob Chapman and Ross Challacombe rounded out a good weekend for Mitsubishi, taking their Triton to third in class.

In the Performance 2WD Class, the trend continued with SeaLake's Bernie Clohesy and Kim Stacey keeping their V8 powered #570 Mitsubishi Triton ahead of Scott Gould's #522 V8 Rodeo all weekend.

While the Gallard Geiser Truck was never challenged at the head of the Extreme 2WD Class, runners-up Greg Campbell and Billy Bastian in the iconic #475 Porsche played a waiting game as the race unfolded to take second in class, ahead of the #402 Mickey Thompson truck of Chris Western and Stuey Bishop. Earlier in the weekend, Billy Geddes and Jamie Ward were smoking the 80km Goondiwindi course, charging from eleventh to second on the road behind Gallard. However, the Queenslanders exited the race in spectacular fashion after their Trophy Truck suffered a massive high-speed barrel roll on Malapunyah Run at the end of section two. Both Billy and Jamie were reported to be OK after the incident, which is a testament to the strength of the Geiser Bros vehicle and the safety gear the team embraced.

With the Albins Offroad Gear Goondiwindi 400 done and dusted, race teams are now focused on round 3 of the AORC. Gallard's victory at Goondiwindi keeps the race for the 2012 Australian Off Road Championship wide open, ensuring an exciting battle will unfold in the Tantanoola pine forests on September 7 - 9 at the Teagle Excavations ARB Pines Enduro. 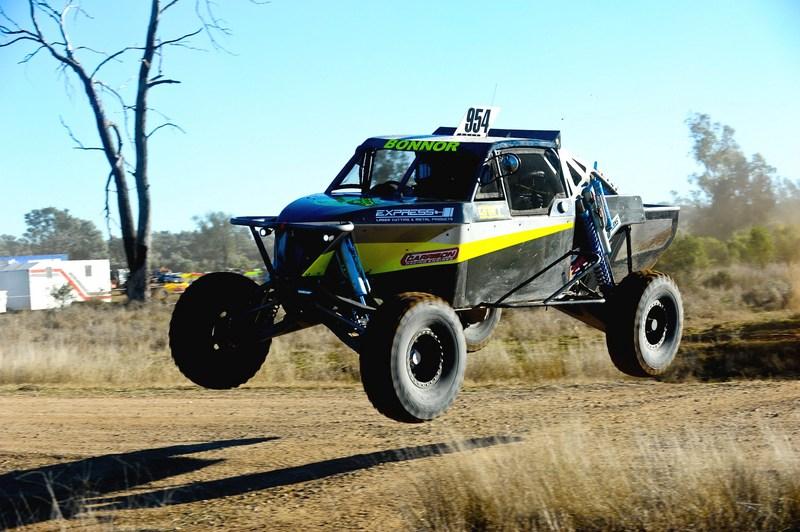 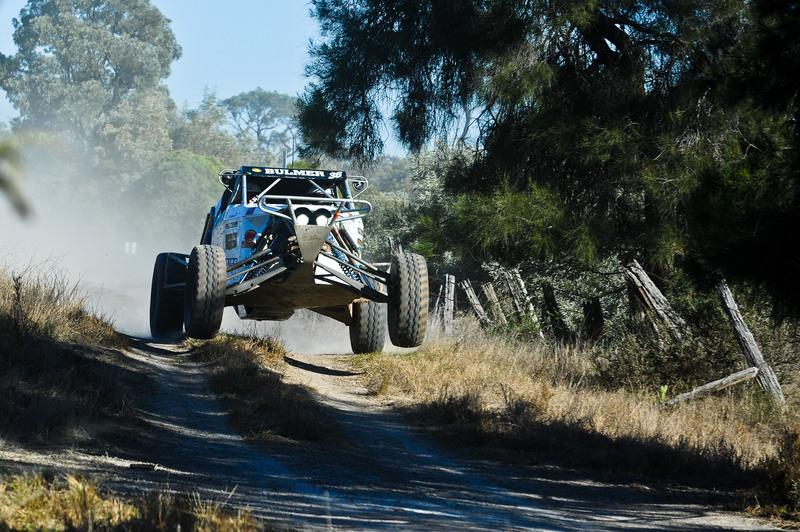 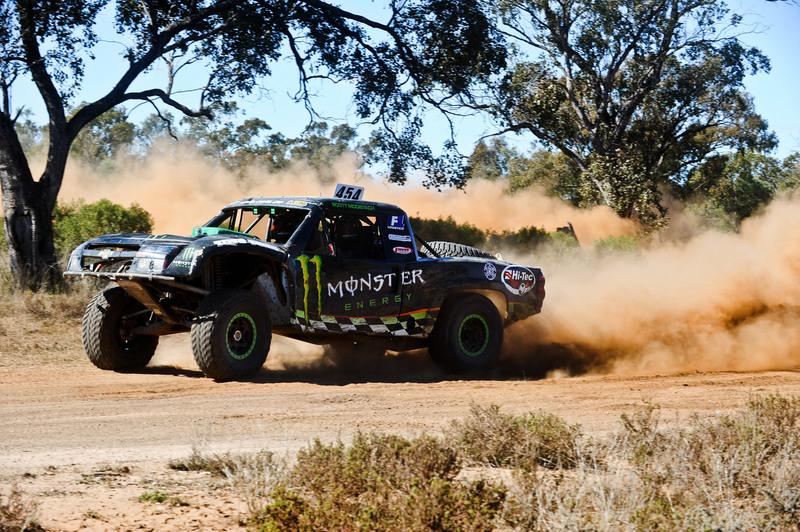