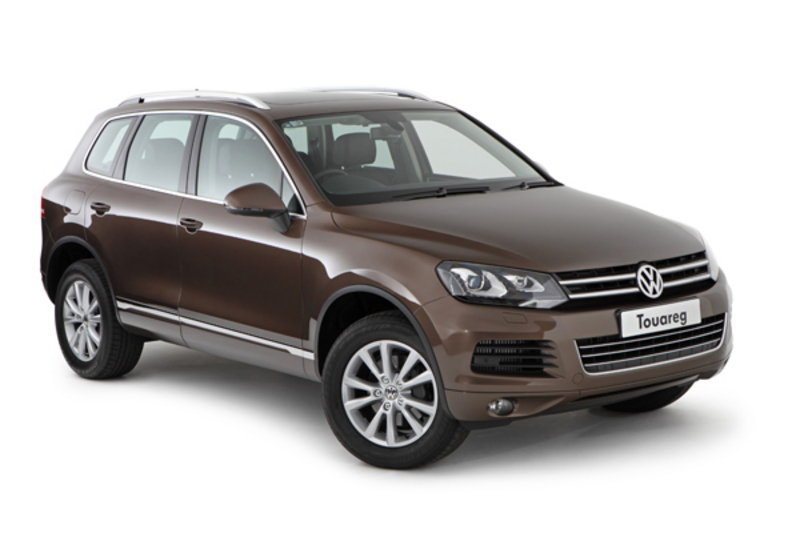 There has, however, been one exception - the German brand's flagship Touareg luxury SUV - a vehicle that has never achieved the market-place success it deserves
In recent years, Volkswagen's passenger car and commercial vehicle ranges have gone from strength to strength in their Australian sales performance

There has, however, been one exception - the German brand's flagship Touareg luxury SUV - a vehicle that has never achieved the market-place success it deserves.

That said, the arrival of the four-version 2011/2012 model line-up should give local dealers the ammunition to really take the fight up to arch rivals such as the BMW X5, the Mercedes-Benz M-class and its Audi's Q7 and Porsche Cayenne cousins, with which it shares a similar platform.

The big VW SUV first arrived here in 2003 and because production stopped early last year, local dealers have not had a Touareg in their showrooms for around 15 months.

Putting the sharp pricing into perspective, it's worth noting that competitors such as the X5, M-class and Q7 all kick off their entry-level pricing around $20,000 more than the entry-level Touareg 150TDI turbo-diesel's $62,990.

This compares with its predecessor base model's $65,490 and when you compare the new line-up's pricing and specification levels it will surely only be brand snobbery that keeps the new Touareg off luxury SUV buyers' shopping lists.

Next up the pecking order is the only petrol version in the new line-up - the $77,990 V6 FSI - and it's followed by the identically priced V6 TDI and the range-topping V6 TDI 4xMotion with its $82,990 price tag.

At launch, the two three-litre TDI versions deliver peak power figures of 150kW and 176kW and maximum torque of 400Nm and 550Nm respectively but the next boat load of the more powerful 2012 versions to arrive will have 180kW rather than 176kW. The combined fuel-consumption figure for the 176kW version sits at 7.6-litres/100km but this will drop to 7.4-litres for the 180kW engine.

The wonderful 750Nm V10 turbo-diesel that powered the now superseded top-spec Touareg has been dropped and the V8 petrol engine is also long-gone.

The 3.6-litre petrol V6 is good for 206kW of power and maximum torque tips the scales at 360Nm. VW claims a combined fuel-consumption figure of 10.1-litres - making it an impressive 2.3-litres less thirsty than its predecessor.

Both engines are mated with VW's new eight-speed automatic transmission and an automatic stop/start system is standard across the range.

Move up to the top-spec 4xMotion "oiler" and you're looking at an SUV with serious off-road credentials.

The reason is a high/low-range transmission with switchable settings for on-road, off-road and low-range applications and electronic centre-and rear diff locks.

For added engine and transmission protection on the rough stuff there are tough steel under-body guards and range is increased by a 100-litre fuel tank rather than the 85-litre tank found in the other models. Also found on the top-spec version are body side and bumper trim and dual chrome oval exhaust outlets.

New Touareg buyers who are not content with the standard-kit inventory on their particular model can choose from a pretty fancy options menu that in total adds up to a wallet-bruising $42,000.

The driver assistance package includes seriously clever features such as adaptive cruise control with an emergency-braking function, a blind-spot warning system, a lane-departure warning system and a seatbelt-tensioning system. There is also a heated leather-wrapped steering wheel.

Also available is an area-view camera system that gives the driver an all-round view of the car during parking and there is a wide-view camera that can even see over crests or around corners.

Touareg buyers who tow horse floats or large boats will welcome a 3500kg towing capacity and a towball weight of 280kg.

Styling-wise, the new Touareg sports VW's familiar and handsome frontal treatment with its dominant horizontal lines while at the rear there are new look LED taillights and boldly styled chrome exhaust outlets.

Happily, gone is the previous model's horrible foot-operated parking brake and in its place is a slick electronic version that is engaged or cancelled via a console-mounted push-down or flick-up control.

Out on the road during the Australian media-launch drive program, the new Touareg models absolutely loved the hills and winding roads in the hinterland behind Noosa on Queensland's Sunshine Coast.

With their 550Nm of torque, the turbo-diesels were particularly impressive and they out-shone the V6 petrol version with its 360Nm.

That said, both the TDI and petrol versions drive with a remarkable level of poise and refinement. Cabin noise - or the lack of it - makes the new Touaregs as quiet inside as any luxury SUV on the market.

Built quality is also excellent and the big SUV feels like it was hewn from a block of high-quality German steel.

Handling is also impressive and the suspension set-up and permanent all-wheel-drive system keeps body roll to a minimum on tight, enthusiastically driven corners.

Speaking of the all-wheel-drive system, the 4Motion unit fitted to the Touareg is as tough as nails and while 550Nm is the peak-torque figure for the TDI versions, the big SUV's system is designed to cope with up to 800Nm.

Under normal driving conditions 4Motion delivers 40 percent of the torque to the front wheels and 60 percent to the rear but it can do a 60:40 split or even a 20:80 split.

Steering is beautifully weighted and other than the command driving position you get in all big SUVs, it's easy to forget that's the kind of vehicle you're driving.

I'm not much of a fan of stop/start systems but the Touareg's system is one of the better, less-intrusive ones.

In summary, the handsome new Touareg really does deserve the serious consideration of luxury SUV buyers. While its entry-level price tag is more akin to Japanese offerings such as the Toyota Prado, the Nissan Pathfinder and Mitsubishi's Pajero, it is also way below the three premium German brands' competitors.

Only time will tell whether the new Touareg can rattle the cages of the X5, the M-class, the Q7 and the Porsche Cayenne - not to mention the aforementioned Japanese SUVs - but it deserves to. 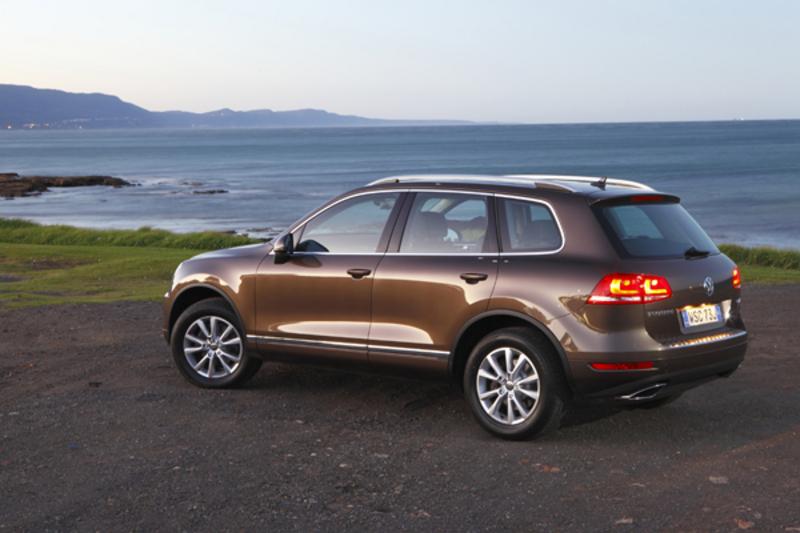 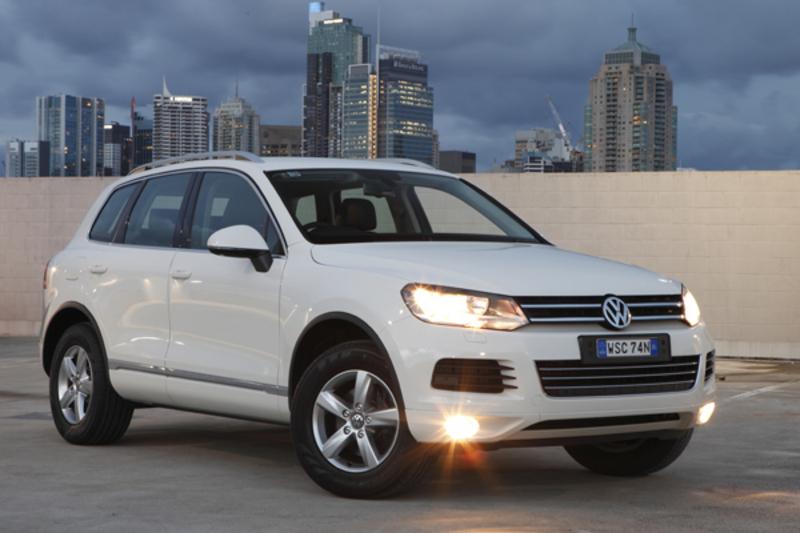 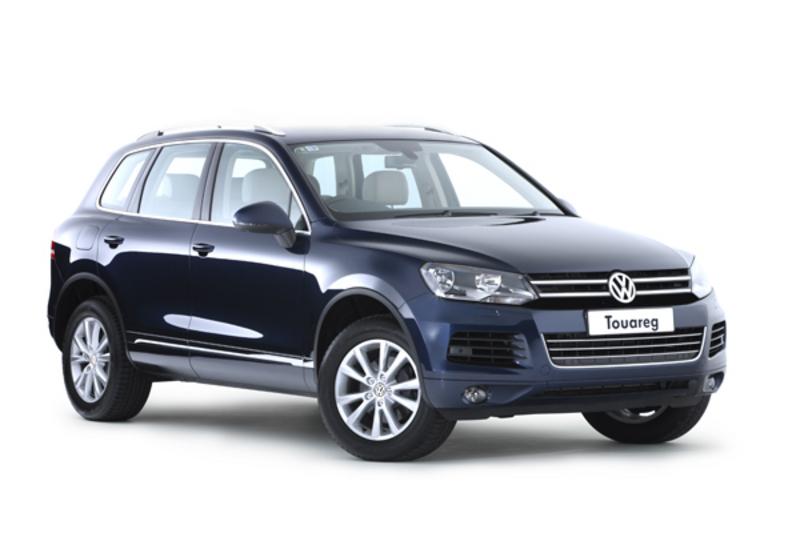 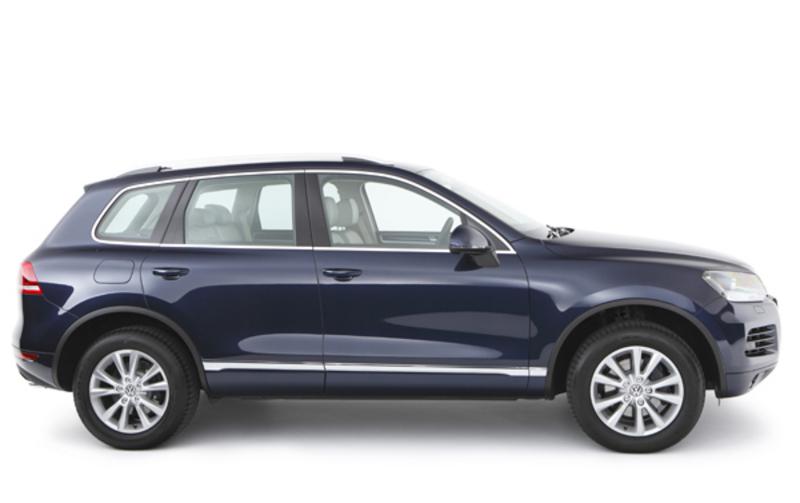