The compact SUV segment continues to grow with buyers flocking to things like Subaru's Forester, the Toyota RAV 4, the five-seat Holden Captiva, Hyundai's ix35, the Kia Sportage, the Mazda CX7, the Nissan X-Trail, the VW Tiguan, the Mitsubishi Outlander and Suzuki's Grand Vitara.

Enter the Korando - Ssangyong's first all new model in more than three years.

The first thing you notice is its slick styling and it's a look that can more than hold its own with any of the major players. Given that it was penned by master stylist and car designer of the century, Giorgetto Guigiaro, of Ital Design, the Korando's classy on-road persona is not surprising.

The new Korean offering comes in three guises - S, SX and SPR. The entry-level S is a two-wheel drive model and buyers have the choice of either six-speed manual or an automatic transmission. At this stage the only engine is a European developed two-litre turbo-diesel that churns out a peak power figure of 129kW at 4000rpm and 360Nm of torque that is on tap between 2000 and 3000rpm.

Importantly, for environmentally conscious buyers, the engine is Euro-5 emissions rated and there is nothing else in the segment other than more expensive European offerings that can claim this.

Speaking of the dollars involved, the 2WD Korando manual's' entry-level price tag of $27,990 driveaway makes a compelling value for money statement, especially given the raft of goodies that come standard with this model.

The top-spec "one-with-the-lot" SPR all-wheel drive automatic comes in at a remarkably low $36,811.

The new Korando's 129kW/360Nm two-litre turbo-diesel engine is a gem. As well as its Euro-5 emissions credentials, in 2WD guise it delivers a combined fuel consumption figure of 6.4-litres/100km and when mated with the six-speed automatic buyers can look forward to 7.5-litres.

The engine's fuel and emissions efficiency comes from high pressure common-rail direct fuel injection and a clever variable-geometry turbocharger that at low engine revs helps eliminate the dreaded turbo lag. As the revs climb, the turbocharger's vanes adjust to increase the flow of exhaust gases and this in turn increases turbo speed and the available top-end boost and power.

In the all-wheel drive department, the Korando's system has a 4WD lock function that allows the driver to lock the car into a 50/50 power-distribution mode when the going gets tough and maximum traction is required.

Looking at the new Korean offering's standard-kit menu, it's hard to come up with a competitor vehicle that comes even close to what the Korando buyers can look forward to. Consider the following.

The shopping list includes a six-speaker AM/FM/CD/MP3 audio system with USB connectivity and audio-streaming Bluetooth, there are power windows with a one-touch with safety roll back function window for the driver and storage cubby holes abound. While the S model has manual controlled air conditioning, both the SX and SPR boast a climate-control system.

The top-sped SPR has a power adjustable driver's seat with fore and aft, seat-base tilt and seat-height controls and the leather wrapped steering wheel is tilt (but not reach) adjustable and there are convenient steering wheel mounted audio controls.

Cruise control with Eco mode is standard for all Korando models and there is a computer that displays distance traveled, two separate trip meters, distance to empty, a real-time instant fuel usage meter and average fuel usage.

Both the SX and SPR variants have a multi-function rear cargo net (optional on S) and there are four built-in tie-down points allow users to easily secure heavier items. There is also rear small item storage in under-floor bins located outboard of the full size-alloy spare wheel - 16-inch on the S, 17-inch on the SX and 18-inch on the SPR.

The Korando boasts a class leading towing capacity of 2,000kg for trailers equipped with brakes and up to 750kg for trailers without brakes. Most of its competitors, including the Hyundai ix35 and Kia Sportage are only rated to 1,600kg while Nissan's Dualis has a capacity of just 1,400kg and the Mitsubishi ASX is rated at 1,075kg.

Move up to the mid-spec SX version and you add active all-wheel drive, front fog lights, illuminated driver and passenger vanity mirrors, a rear cargo cover and net and the climate-control "air."

Buyers of the range topping SPR will get to enjoy all of the goodies on the other two models plus the 18-inch alloy wheels, a rear roof-mounted spoiler, a power sunroof, leather seat trim, heated front seats (power adjustable for the driver), power-folding exterior mirrors, driver controlled headlight levelling and rear parking sensors. It's quite a package.

While the automatic versions were not available on the media launch drive program, time spent in the manual Korandos confirmed what a great package Ssangyong has come up with.

The clutch is nice and light and even through the program cars had only minimal kilometres on the clock, the manual shifts were slick and precise. Fit and finish were as good as anything in the segment and the interior is surprisingly roomy both in terms of leg-and-head room.

Minor niggles are hard to find but a handbrake mounted on the passenger's side of the centre console is somewhat annoying as is the lack of reach adjustment for the steering wheel.

In summary, even though Ssangyong is now owned by India's Mahindra group, the Korando is another examples of just how far the Korean motor industry has come in a relatively short time.

If you're in the market for a compact SUV, this new player should be on your shopping list. 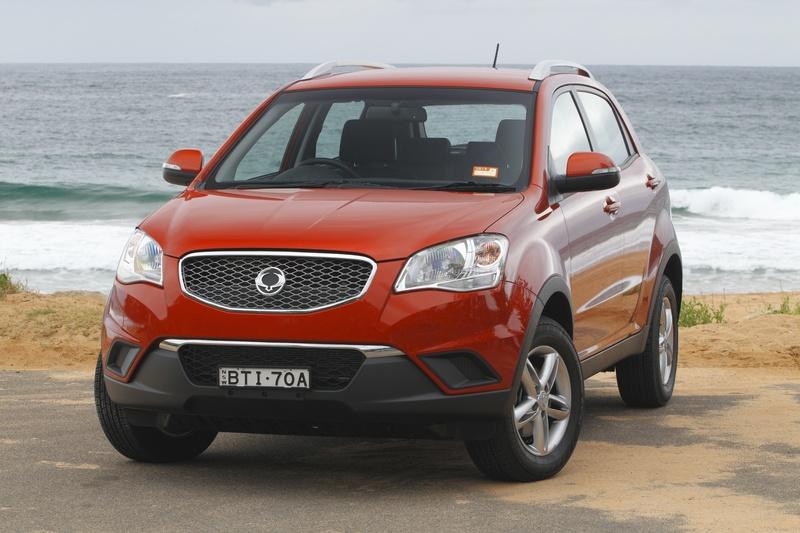 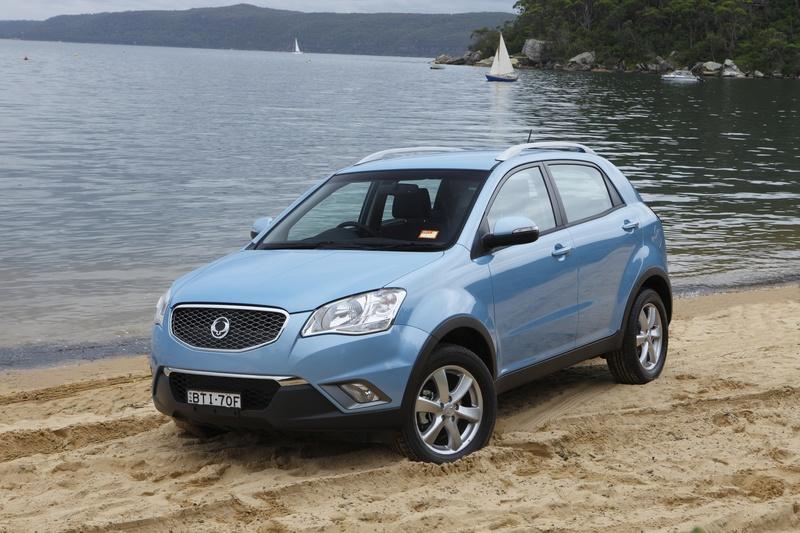 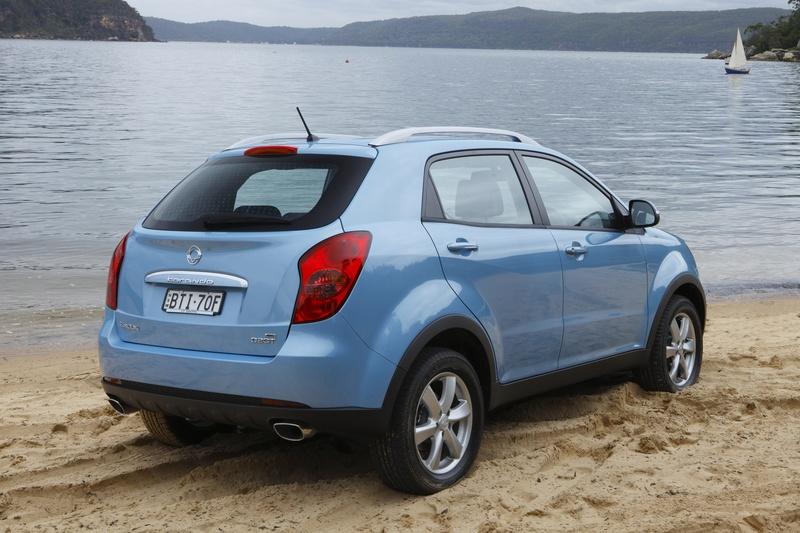 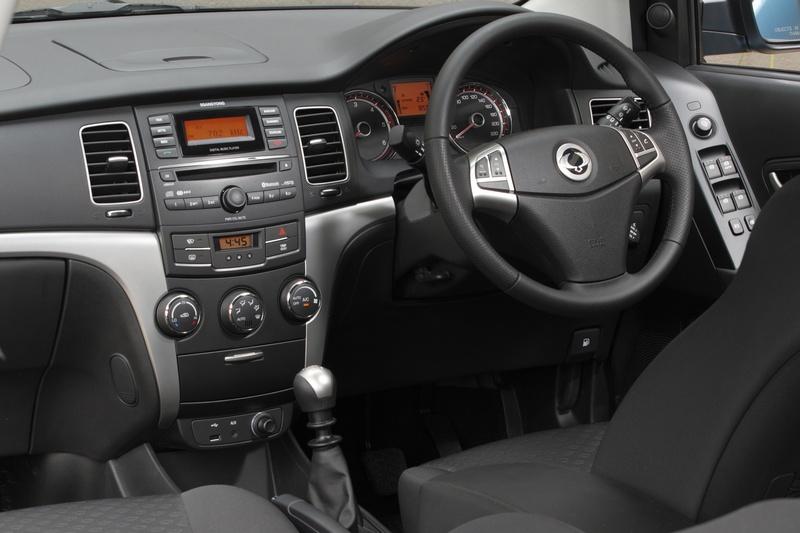