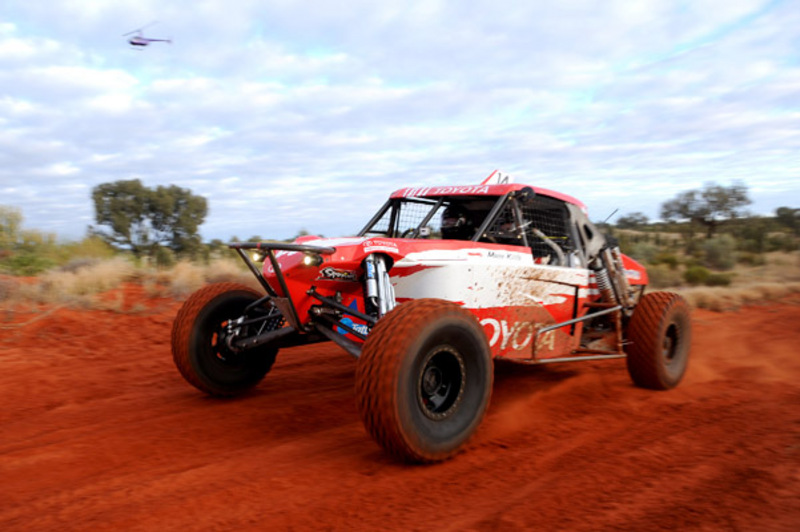 "I quite honestly never thought it would be achieveable." said Gartner at the finish of Australia's largest and most prestigious off-road event.

"I thought we could get close but the luck was on our side. Even a finish is good up here, let alone where we are at the moment. It's fantastic! It's what you come here for and to come across the finish line was good."

Gartner's long time navigator Jamie Jennings was equally ecstatic, "We thought we might get a podium finish one day, but this is a dream."

Behind the winning pair, Andrew Kittle and Matthew Kittle in the #14 Peter Kittle Motorsport Jimco buggy finished second outright in 3 hrs. 58 min. 25 secs. Andrew Kittle has already tasted success as a navigator, winning the race with Dave Fellows in 2008 & 2009, but this was his first time on the podium as a driver. In third place at the Alice Springs finish line was the local crew of Greg Hicks and Shane Braitling in their Australian-built #123 Southern Cross Toyota buggy, who completed the total race distance in a time of 3 hrs 59 mins 35 seconds. The Hicks/Braitling result marks only the second time a Prolite buggy has finished on the podium at an AORC round, the result was a testament to the race plan the team ran. Matthew Coleman and Sean Teagle finished fourth outright in the Chevy powered Alpha buggy, just twenty seconds ahead of Buddy & Kerry Crowe in their Chevy-powered Jimco.

Fellows/Bergamin were quickest in the pre-event prologue, but any chance the pair had of repeating their 2010 Finke success was sunk on the first day, when the pair broke a drive shaft in their #1 Jimco buggy less than 20 kms from the start line. While they were able to repair the mechanical failure, the delay put them out of contention for the overall win. Despite this, the South Australian duo still put in a blistering run on the return leg from Finke to Alice Springs. Aiming to get amongst the haul of AORC points on offer, they were the fastest on the course, taking 1 hour 49 minutes 15 seconds for the 226 kilometre day 2 leg, compared to Gartner/Jennings' best time of 1hr 54 mins 1 sec.

Fellows/Bergamin were only one of a number of casualties, as this year's Finke proved to be another war of attrition. The unforgiving nature of the course and the competition saw 30 starters listed as non-finishers at the end of day one, with more than a dozen others failing to complete the return leg. Amongst those were former Australian champs, Shannon and Ian Rentsch, who suffered a broken axle 30 kilometres short of Finke. After spending close to an hour getting their 2010-spec Jimco drivable, they limped into Finke, but chose to sit out the return leg to Alice Springs. Early pace from the Travis Robinson/Paul Currie #13 Jimco buggy came to nothing when they suffered apparent gearbox failure between Mt Squires and Bundooma on the run back to Alice Springs. The WA pair had led the field into Finke, so the breakdown was doubly disappointing. Brad Gallard/Scott Modistach in the #454 Monster Chev Trophy Truck also joined the casualty list on the return leg, a broken diff ending their blazing day one performance - from 17th on the starting grid to 2nd outright at the end of leg one. Geoff Rowe/Liz Rowe in the #403 Geiser Bros Trophy Truck were third into Finke, but according to reports from other crews, had a "wheel off" near Deep Well and failed to finish.

While Gartner, Kittle and Braitling took the class honours in the Extreme 2WD, ProBuggy and Prolite Classes respectively, the battles across the other classes were just as fierce. Colin Hunter took the honours in the Extreme 4WD Class, even after overcoming a fire in his Dodge Dakota on the return leg. In fact, Hunter had the X2WD class to himself after all other contenders, including Clayton Chapman, failed to finish. Chapman had performed strongly in the prologue, recording fastest overall X2WD time, but a series of problems effectively ended his race before the conclusion of leg one. On the run to Finke, the gearstick came loose in their Pajero, forcing navigator Adam McGuire to shift gears using a pair of screwdrivers! On the run back to Alice Springs, Chapman bent a steering arm, then ploughed into a ditch, which ended the race for the young Queenslanders.

In his tenth appearance at Finke, Geoff Pickering continued his good form, winning the Production 4WD Class in his Pajero and maintaining an unrivalled 100 percent finishing record. P4WD class winners at the Hyden 450, Matthew Hall & Jason Isaac, couldn't match the pace of Pickering, finishing more than an hour adrift. Darryl Smith continued his dominance of the Super 1650 Class, finishing in a time of 4:32:51 in his Alumicraft ahead of Murray England, who had stepped his 1300cc Sportsman buggy into the bigger capacity class. If there was a 'most consistent' award, Smith would have picked that up too, as the difference between his day one and day two times was a mere seven seconds! Victoria's Craig Weaire and David Adriaans took the honours in the Performance 2WD Class with their 6.0 litre Chev-powered Navara, finishing ahead of the Bohlin/Nicholson Ford Courier, and Osinski/Zlotkowski Ford Ranger.

Round three of the Australian Off Road Championship will be the Flinders 450 on July 22-24, held at Baroota in South Australia.

For full results and further details, go to www.offroadracing.com.au 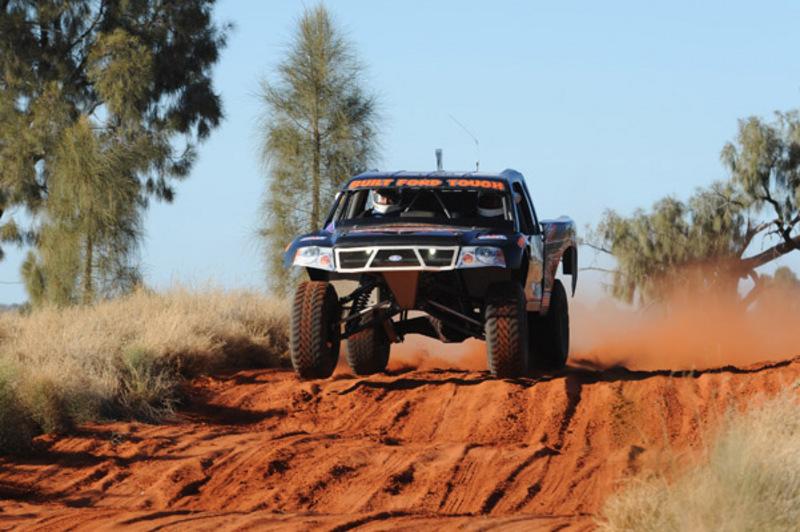 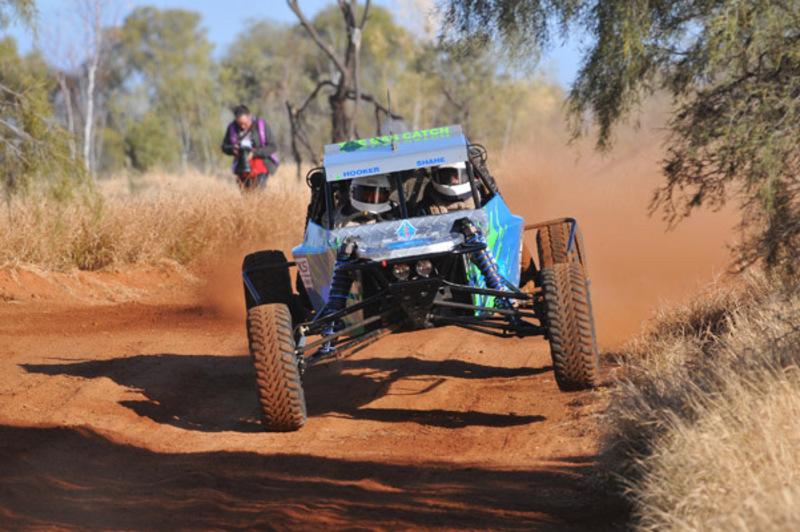