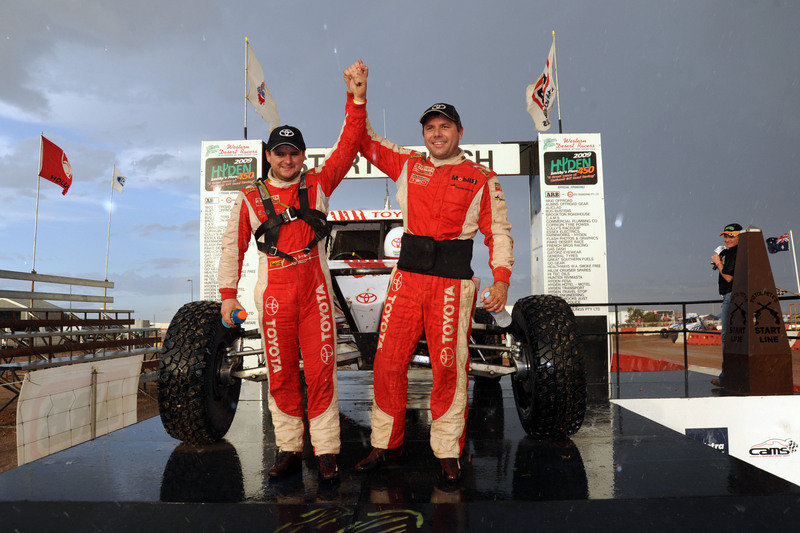 Fellows' win, in a time of 4 hours 40min 14.72 seconds, gives him a valuable head start in the race for the 2011 Australian Off Road Championship.

Held in the wheatfields near Wave Rock, the action kicked off with a Prologue on Easter Saturday, where WA locals, Travis Robinson and Paul Currie (13) in their Outerbounds Racing Jimco Pro buggy were the quickest of the 66 competitors that tackled the 15km circuit. Robinson/Currie finished eight seconds ahead of the #2 True Build Racing Jimco of Danny Auricht and Grant Connelly. Fellows/Bergamin were third in the Prologue, but redeemed themselves in the Top Ten Shootout that followed, securing pole position for Sunday's main race. The second of the Outer Bounds Racing Jimcos of Beau Robinson and Adam Trewhella improved a massive 17 seconds on their Prologue time to move into fourth position for the race start. Pro Buggys dominated the overall Top Ten with one exception, the ProLite Razorback of current SA Offroad Champion, Team Hosetech's Andrew Mowles (135).

In prologue qualifying for the other classes, Chris Western and Stuey Bishop (401) showed the modifications done in the off season paid off, driving their Mickey Thompson Off Road Rush Truck into 19th outright and first in Extreme 2WD. Making his debut in Extreme 4WD for the 2011 Off Road season and putting in a superb drive to finish the Prologue first in class was the current Australian Off Road Production 4WD Champions, Clayton Chapman and Adam McGuire (871). In the Super 1650 class, the MS Jarvi buggy of Werner and Sue Zettl (202) crossed the timing marker with the narrowest of leads over the local Liability Racing team of Jeremy Lia and Xavier White (220) in a Hunter Rivmasta. The Production 4WD ranks at Hyden were without last year's two main protagonists - Clayton Chapman and Geoff Pickering - which meant the class was wide open for new drivers. The WA Access Hire team of Zeb Casey and Ryan McPherson (766) in their Nissan GQ Patrol topped the class in only their third off road race. Jason Galea and Sarah Davies (706) took second place in the second competitive drive of their new Toyota Hilux. The lone Performance 2WD Nissan Navara of Victorian based Craig Weaire and David Adriaans finished the Prologue in 55th outright. Similarly, the Sportsman buggy class fielded only one entry at Hyden, the all-girl team of Annabelle Hosking and Kathryn Flanagan, who secured 57th outright.

Easter Sunday's 450 kilometres of racing started with Fellows surrendering the lead on the first lap to Travis Robinson, who looked on track to claim his first AORC win. Behind Travis Robinson and Fellows, Beau Robinson held the final podium position at the end of Section 1 (two 112km laps) of the race. Shannon & Ian Rentsch (33) were making up for a disastrous Prologue marred by brake failure to charge through the field and challenge the Top Ten at the end of Section 1. The afternoon's Section 2 started well for Travis Robinson, but ended terribly, as the Outerbounds Racing driver snapped an axle on the afternoon's second and final lap, handing the lead and ultimately the overall win to Fellows in the #1 Peter Kittle Motorsport Jimco buggy. Almost immediately after Fellows crossed the line, a rainstorm hit the circuit, turning the dry and dusty course into a slippery skating rink for the remaining competitors. The rain didn't slow the Rentsch father and son team, who continued to carve their way through the field to claim second outright in a time of 04:45:52.86, finishing 5min 38.14sec behind Fellows. Third outright was the single seater Jimco of Sydney's Brad Prout (3), who kept the pressure on the leaders with his Chevy small block-powered machine.

Dan Auricht and Grant Connelly (2) were forced to settle for fourth outright in their mid-engined V8 Jimco 'Aussie Special' after a flat tyre early in the race took its toll. Despite this setback, the early pace demonstrated by the Northern Territory duo, and the fact they rose from tenth to fourth in Section 2 showed the pair will once again be championship contenders in 2011.The Aussie-built Razorback of Aaron James and Brett Plant (128) locked in fifth outright and the ProLite class win. The Mildura-based team put in a flawless performance and once again showed a naturally-aspirated V6 can mix it with the twin turbo and V8-powered big boys. Snapping at their heels was Wes Cowie and Travis Milburn (124), who were lucky to bring their ProLite Jimco home in sixth after a roll during the freak deluge that hit in the race's closing stages. Andrew and Matthew Kittle (14) brought the second Peter Kittle Motorsport Jimco home in seventh, ahead of the Honda-powered ProLite Mirage of Tony Fehlaber and Gary Howell (138). Les Marshall and Glennys Rose (105) rounded out the top ten in their ProLite Jimco, ahead of the first local finisher, Brad Mudge and Brett Beaton in eleventh.

Chapman and McGuire punched well above their weight, bringing their Extreme 4WD Pajero across the finish line in ninth outright. The top ten finish and class win was just that little bit sweeter after the Queenslanders battled through the final two laps with only rear wheel drive and no clutch! Darryl Smith and Michael Matthews (201) took the Super 1650 win in their Alumicraft buggy after a hard fought battle with Russell & Judy Hartnett's Cougar (245). Both competitors were lucky to finish after greeting the chequered flag with clunky sounding gearboxes. Western/Bishop dominated Extreme 2WD, finishing well clear of a trio of WA drivers, but had to muscle up to make it to the finish line after their power steering failed. As the sun was setting, Matthew Hall and Jason Isaac (799) took the Production 4WD Class win. Greg Pickersgill and Uwe Kreusch (708), driving an 80 Series Landcruiser, were second. Early pacesetters Galea/Davies had led the class, but a blown engine forced their retirement on the final lap. The black Nissan Patrol of Russ Cullen and Ash Santilli was the final car to complete the entire race distance. Finishing in darkness with his lights blazing, Cullen was 18th outright and second in Extreme 4WD.

The Australian Off Road Championship now heads to Alice Springs for Round two of the five round championship. The red centre will host the Tattersall's Finke Desert Race on the Queens Birthday Long Weekend, June 10 -13.
For full results and further details, go to www.offroadracing.com.au 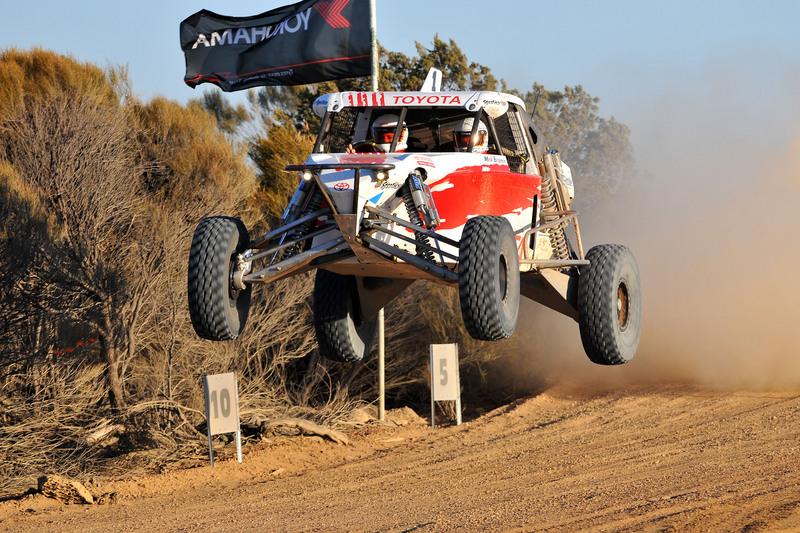 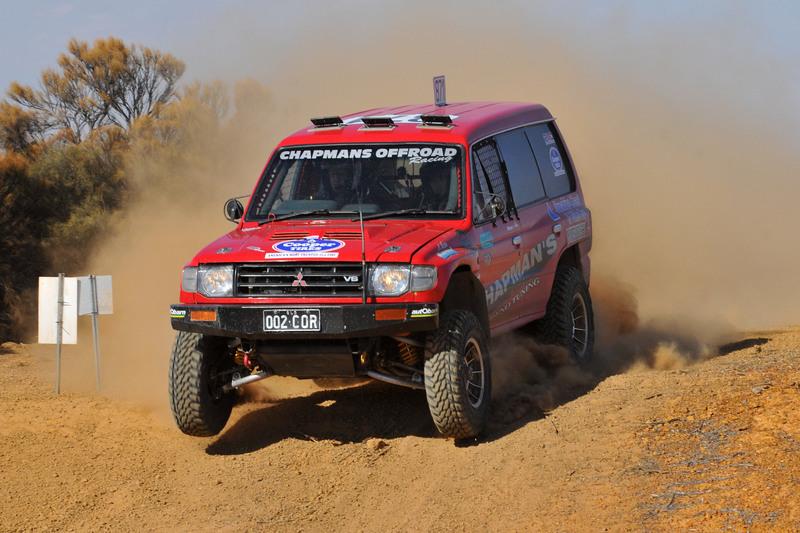 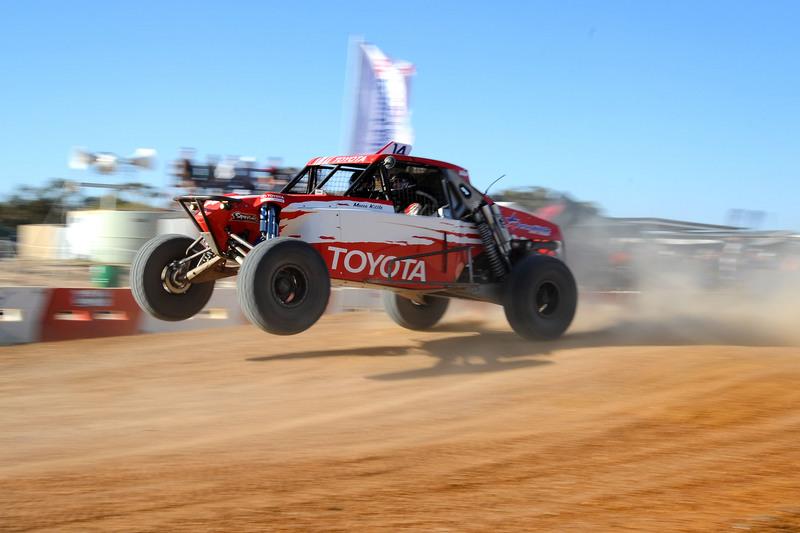 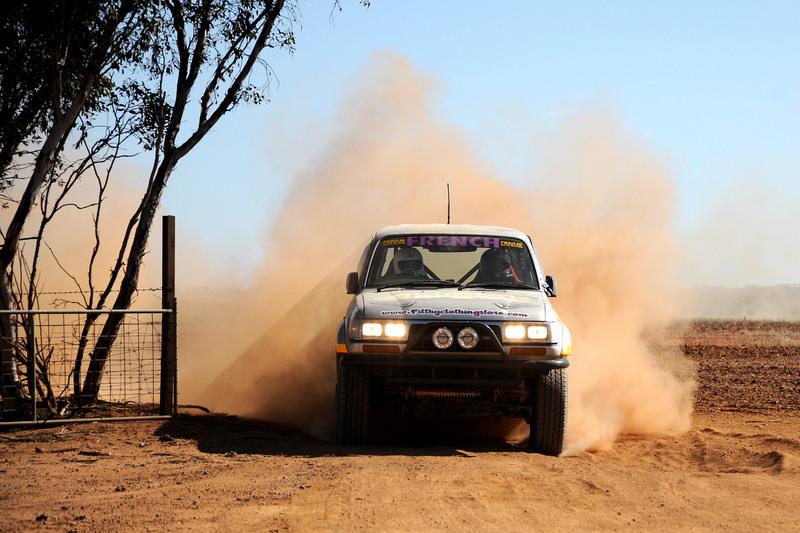