Four wheel drives have become decidedly soft in recent years with numerous off road niceties introduced into a range of mega expensive vehicles that while delivering a luxurious off road ride, often leave the occupants as a passenger to the whole experience. It is refreshing that two of the greatest names in four-wheel drive folklore - Jeep and Land Rover have maintained models that are close to their origins, and certainly remain among the most capable genuine off roaders available. When it comes to four-wheel drives that have a genuine DNA trail that can be sourced back to their first vehicles, you need look no further that Jeep and the Wrangler. The Wrangler boasts a long heritage that is as distinct as it is unique for its longevity. The Wrangler history stretches back to the Willys Jeep, which evolved into the civilian CJ series in 1945 and remained in service albeit with numerous upgrades through to the CJ-7 and CJ-8 in 1981.

The Wrangler was introduced in 1987 as the replacement for the long serving CJ and shared many of the virtues of the original Willys and CJ series. The Wrangler has evolved a long the way, with the last major update being the TJ Series in 1997. It has taken ten years, but now the JK Series Wrangler has arrived. It still retains the military lines of its predecessors, but don't be mistaken this vehicle is completely new, with a host of improvements. Most noticeable is the fact that this vehicle is much larger than the outgoing TJ Series. It retains the styling cues that form the Wranglers pedigree, yet they have been subtly massaged into a contemporary product. Of course the seven slot grille, round indicator and headlights and exposed door hinges remain, but the boxy fenders are replaced with wider and more prominent guards and a new moulded bumper that incorporates fog lights. The bumper is constructed of an energy absorbing material that will deform with minor knocks and regain its shape.

It also provides a new air dam underneath and provides better aerodynamics. The new Wrangler's flat, clamshell hood intersects new trapezoidal fender flares, which appear as separate fender components - similar to the early CJ Jeeps. The Wrangler retains it folding windscreen, which for the first time has the slightest of curves to improve aerodynamics. In both soft top and hardtop versions noise levels are noticeably lessened and interior sound levels aren't too bad, with wind noises only intrusive at highway speeds. Build quality is better, with closer metal joints and wind flow has been improved, as have seals to reduce external noise levels. The Jeeps have new sheet metal and a gutsy purposeful appearance. Full-framed or half doors are removable, and the full-framed doors also feature available power windows and power door locks - a Wrangler first. The Wrangler is also equipped with new blow-moulded step assists that are mounted to the body and feature a diamond plate texture on the surface. For added body protection, Jeep Wrangler Rubicon models come standard with heavy-duty rock rails. From the exposed fuel-filler cap to the externally mounted spare tyre, the rear of the all new 2007 Jeep Wrangler maintains its rugged appeal. New tail lamps are mounted separately from the body - a traditional Jeep Wrangler trait - and are reminiscent of the 1941 Jeep Willys' tail lamps.

Of course the highlight - well two actually - of the new range is the introduction of the first 4-door model (Wrangler Unlimited) and the Rubicon, which is probably the most capable production ready 4x4 Jeep ever. The JK Wrangler is available in two body styles - the 2-door Wrangler and the 4-door Wrangler Unlimited. Both models come in three versions Sport, Renegade and Rubicon. Sticking with tradition, both also come with a choice of soft top or removable Freedom Top hardtop. While Jeep have retained traditional aspects of the Wrangler it must be pointed out that this is an all new model with no carry over of parts from its predecessor. Almost everything on the Wrangler has been redesigned. It is bigger than the TJ?model in all dimensions and makes significant gains in performance, safety, refinement and drivability, and for the first time is offered with a diesel engine. The 2-door Wrangler is 133mm wider at 1837mm, 99mm wider in tracks at 1572mm and 51mm longer in wheelbase than the outgoing TJ Wrangler.

Apart from an extra 523mm in length and two extra doors, the Unlimited is otherwise identical to its 2-door stablemate. Globally Australia is a significant market for Wrangler and Ed Cummins, Chrysler group senior manager, Asia-Pacific noted that outside the USA, Australia is the number one market for Wrangler. Jeep products are sold in 125 markets around the world and Australia ranks number 8 for all Chrysler/Jeep vehicles, a figure that is climbing with local sales up 20 percent last year over 2005 figures. Hence it is no surprise that the new model and the introduction of the 4-door variant is expected to see the local market grow even more, as buyers that have never put Jeep on their shopping list will take a look at the new models. In fact the Australian market is thought so highly, that it is the first to receive the diesel variant, which will not be offered in the USA.

Jeep Wrangler Renegade
The Jeep Wrangler Renegade package is the premium model in the line-up and represents great value at a RRP of $32,990. The Renegade pack adds over $4,000 of additional value - for only $2,000 when optioning on the Wrangler Sport, or in four-door form only an extra $2,500. In addition to standard features on the Jeep Wrangler Sport, Renegade includes a dual top and Freedom Top 3-piece modular hard top, deep tint glass, 6-disc CD/DVD player, Infinity premium speakers with subwoofer and tubular side steps.

On the road
Despite its 4x4 ability the TJ Wrangler was an annoying vehicle in many respects. It was particularly noisy and ride and handling was average on road. In designing the new JK Wrangler, Jeep engineers have addressed and improved all aspects of the vehicle. Built on a new fully boxed frame that has 50 percent torsional stiffness, this is an ideal platform for the improved five-link coil suspension and live axles, which works exceedingly well, along with the wider track. There are new shocks, and lower spring rates deliver a more comfortable ride. Gone is the agricultural feel, replaced by sharper steering and greatly improved ride comfort. At speed on dirt roads and over corrugations the 2-door Wrangler is a little flighty at the rear, although overall it handles well with stable road holding. Undoubtedly Wrangler's new safety package also assists with Electronic Stability Control standard across the range. ESP helps the driver maintain vehicle directional control by applying selective braking and engine control, within the limits of available traction to maintain the vehicles intended course.

Wrangler's ESP system includes Hydraulic Brake Assist, Traction Control, Brake Lock Differentials and Electronic Roll Mitigation. It can be deactivated for off road activities. On road the longer wheelbase Unlimited delivers more predictable handling and comfortable ride. The two new engines are both sound units, both well matched to the transmission choices. My choice is the 2.8-litre turbo-diesel which handled highway travel with greater aplomb, yet still has a wonderful torque for low range crawling. The cabin of the Wrangler still retains much that is common with earlier models. There are still sections of painted metal, with cladding only covering essential working parts. The dash is plain, with plenty of plastic and a central centre stack housing air conditioning and radio controls. There is a circular theme throughout the Wrangler which flows from the round headlights, to circular air vents, internal door handle recesses and small circular speakers in the corners of the dash. Instrumentation is adequate although far from overwhelming. Power window switches are far from intuitive, being located in the centre of the dash console.

There are still some quirky American design features that the driver needs to become acquainted. One major admission to the international status of the Australian market is the location of the transfer lever, which hasn't been relocated for right hand drive markets. The driver is forced to stretch across the gear stick to get to the left hand side of the console. The seats offer good support, perhaps being just a little flat, but an improvement on what has gone before. There is no steering column reach adjustment, which for shorter drivers results in an uncomfortable matching of foot pedal reach and proximity to the steering wheel. The soft top remains a jigsaw to remove, and the better option is the hard top which can be removed easier, in sections. For genuine four wheel driving the Wrangler Rubicon is the pick of the trio. This is a truly great off road machine with standard front and rear diff locks a bonus.

Throw in the electronic sway bar disconnection switch and this vehicle is really designed for rock hopping. On our test we drove over 100 kms in low range and all the Wranglers performed without a hitch. The Unlimited will appeal to many new buyers, offering decent load carrying, reasonable comfort and great off roading ability. It really has the niche to itself with possibly only the Defender and yet to be released Hummer H3 as competitors. All up the new Wrangler range advances the brand into the 21st century, without compromising its core values. For genuine four wheeling they are up there with the best.
Brian Tanner 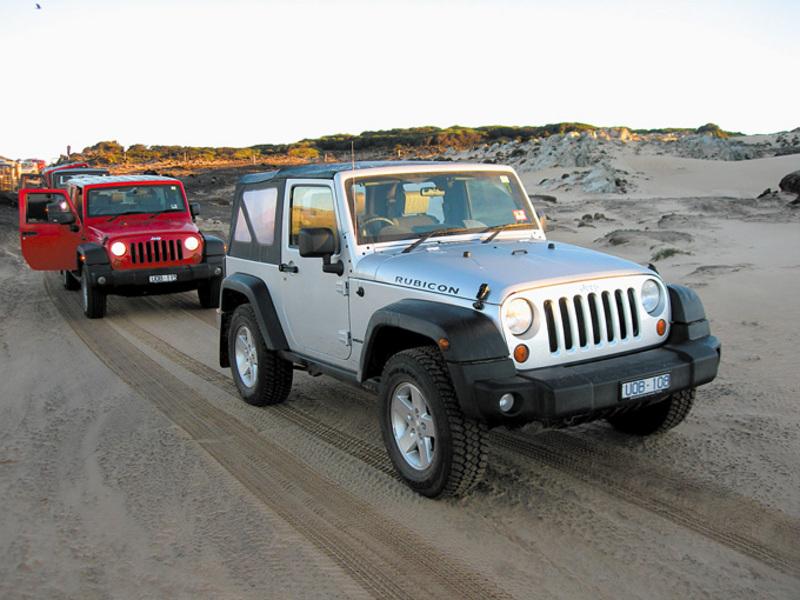 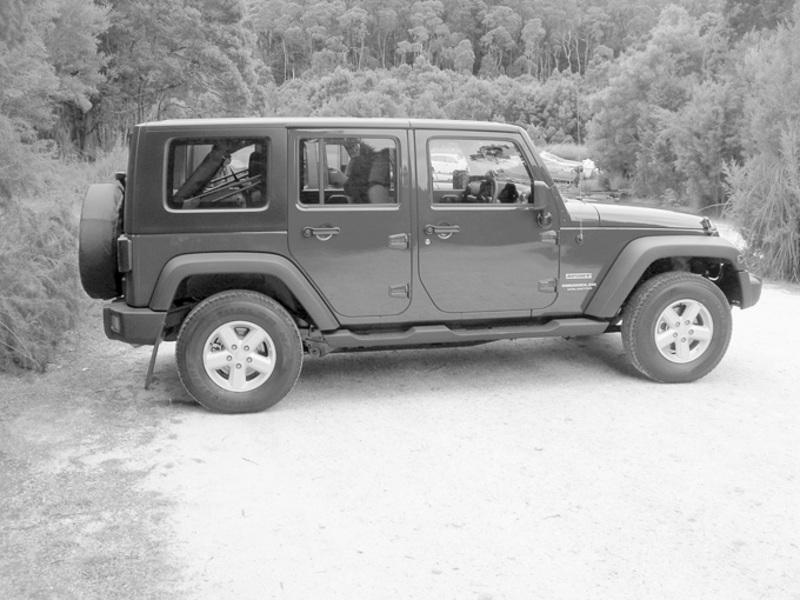 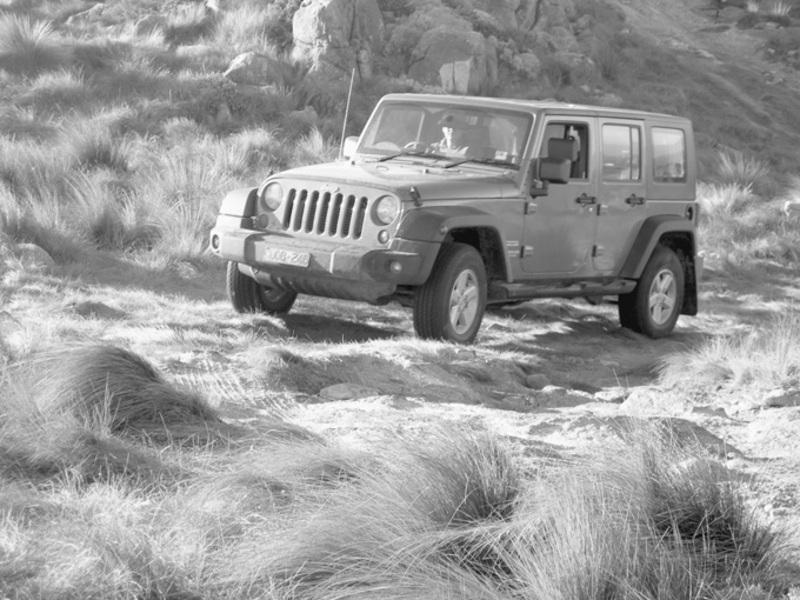 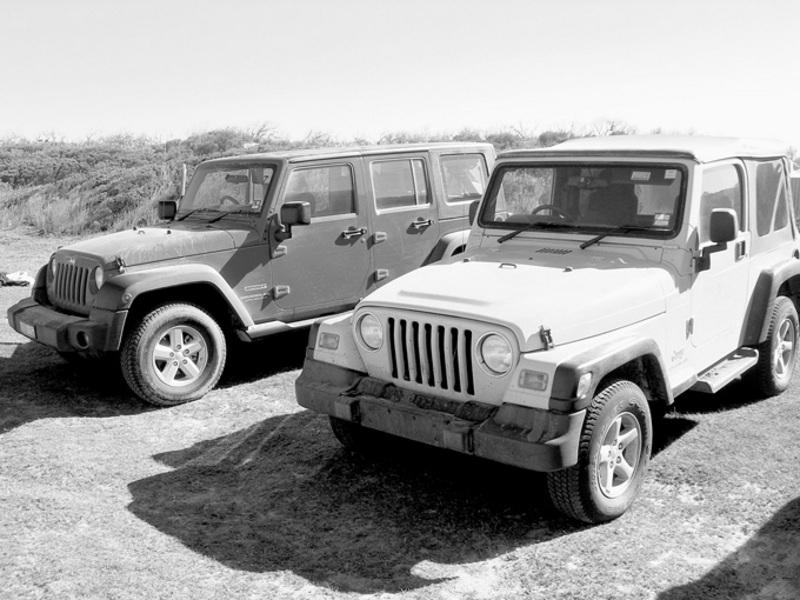