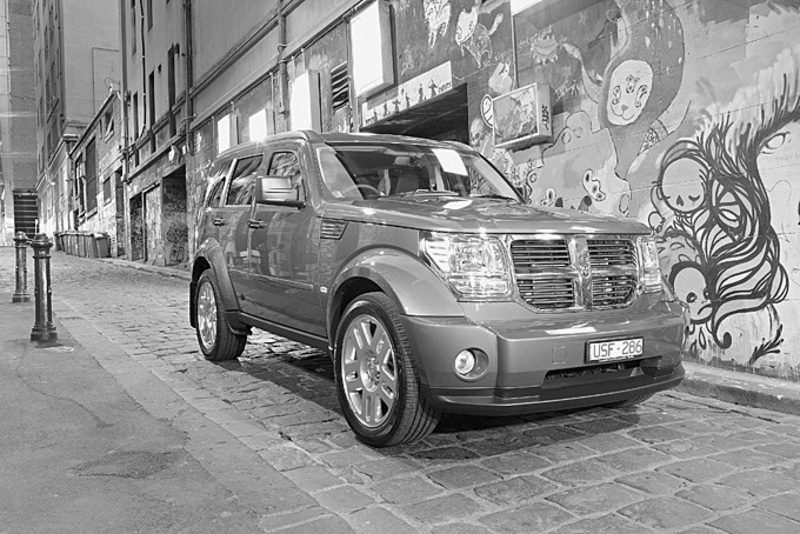 Dodge is no newcomer to four-wheel drives, with the Nitro following a tradition that stretches back to the original Dodge Power wagon. The Nitro has evolved from the M80 concept vehicle of 2002 and brings to market a presence that is both imposing and assertive. It features Dodge's crosshair grille with the iconic Dodge rams head in the centre. The chrome grille stretches from corner to corner with rectangular head lights, and sweeping wheel arches. The side profile features bulging wheel arches, high waistline and wheels that are pushed to the corners. With short overhangs and wide track the Nitro is a bold mid-sized SUV with plenty of flair. The Nitro is the second Dodge to be released down under, the other being the Caliber with the Avenger sedan set for release next month. At this stage DaimlerChrysler has again scotched dreams of the iconic Dodge Ram 4x4 coming to Australia anytime in the near future. The Nitro is a combination of strong styling, with a mix of muscular elements found on many SUVs.

While badged prominently as a 4x4, Nitro is essentially a rear-wheel drive five seat wagon that is gunning for sales from Holden Captiva, Ford Territory, and Toyota Kluger and even traditional car buyers. Dodge have sharpened their pencils with the Nitro with excellent pricing and a unique insurance deal that they hope will entice many cash strapped younger buyers. The Dodge Nitro SX kicks off at $36,990 for the petrol model ($2,500 cheaper than the base rear drive Ford Territory and a $5,000 less than the base Toyota Kluger) rising to $39,990 for the petrol SXT. The same model with CRD?diesel engine adds $3,500 to each model. Adding further icing to the cake, is the offer of 2 years free comprehensive insurance to all buyers. Whatever your insurance record, as long as you have a valid driver's licence you qualify for the deal.

The offer is underwritten by QBE? Insurance and Dodge say it could save buyers more than $3,600 in the first two years of ownership. There are no age limits and attractive rates will be offered after the 2-year period expires. The Dodge Nitro was first previewed at the Chicago Motor Show in 2002 and while sharing the same platform as the next generation Jeep Cherokee, is a unique stand alone product. Nitro is a mid-sized wagon with comfortable seating for five - there is no provision for a third row seat. Nitro is available in two models with a choice of two engines - a 3.7-litre petrol V6 and 2.8-litre turbo diesel. The petrol engine produces 151kW at 5200rpm and 314Nm of torque at 4000rpm. It is a tidy engine that utilises electronic throttle control, which improves fuel economy. The more attractive engine however, is the 2.8-litre common rail turbo diesel V6, which delivers 130kW at 3800 rpm and a strong 460Nm of torque at 2000 rpm. A four speed automatic transmission is standard for the petrol engine and a five speed for the diesel.

There is no manual option, although the five speed unit features sequential shift with manual mode. The Nitro has a switchable 4x4 system that allows the driver to switch between two-wheel drive (rear wheel) and a part time four-wheel drive system. The Nitro has a single speed, part time transfer case. Two-wheel drive and four-wheel drive modes are electronically controlled via a switch in the centre console. Either mode can be selected at any time. The Nitro's transfer case works in conjunction with the Traction Control and the ESP features to provide enhanced traction and stability on low traction surfaces. The Dodge system differs from that of many of its competitors that offer on-demand all-wheel drive systems. In the Dodge, 4x4 should only be selected on loose surfaces, with damage likely to occur if driven for long periods on firm surfaces. On our drive program we found that this is no deterent for spirited dirt road driving, as the Nitro has a strong arsenal of safety features and a well balanced suspension.

The Nitro has coil spring, independent front suspension and a five-link, coil sprung rear suspension. The system is well suited to local conditions and on our drive route that comprised plenty of bitumen and windy back country dirt roads, the Nitro proved itself to be sure footed, with direct steering and hand-ling that was stable and confidence inspiring. For the majority of driving, the Nitro is more than comfortable in 2WD, with the diesel engine in particular, loaded with enormous torque that is available across a wide rev range. The Nitro rides and handles well on the highway, but head onto gravel roads and the Nitro proves it is well suited to these conditions. The solid rear axle will occasionally skip across corrugations, but generally it was extremely well behaved and cornered predictably. Tackle a corner a little fast and the worth of the traction control and ESP systems are demonstrated, keeping everything on track with little fuss. At lower revs the Nitro is a little sluggish, but in the diesel it is simply a case of using the sequential shifter to regain momentum by grabbing a lower gear.

At higher speeds the more than ample torque will pull the vehicle through, often without the need to change down. Safety and handling are well catered for with four wheel disc, anti-lock brakes, and all speed traction control that transfers torque from one wheel to another on the same axle when wheel slip conditions are detected. Also standard on the Nitro is Electronic Stability Control (ESP) which aids the driver in maintaining vehicle directional stability in severe manoeuvres. On the road the Dodge is easy to drive with a commanding driver position and good vision. The turbo diesel is slightly noisy at launch speeds, but at road speeds this rapidly recedes to acceptable levels. The cabin is comfortable with good head and leg room, although there is an annoying hump either side of the transmission tunnel in the front. The Dodge Nitro is available in two models, the SX and SXT - both well equipped. The SX model comes standard with 16-inch alloy wheels, while the SXT has huge 20-inch alloys. Both models come with a full size spare wheel that is stored under the rear cargo area.

Inside the dash falls rapidly away from the glass line, unlike many current vehicles that have a huge area between the fascia and the glass. Interior design is modern and functional, finished in various hues of grey, with chrome high lights on the steering wheel, instrument cluster, centre console and door handles. There is a wide transmission tunnel housing gear shifter, 4x4 switch, hand brake and cup holders. Seats are generally supportive with good lumbar support and padding. The second row seat is a 65/35 split and fold flat. The SXT model also features a Load'n go cargo floor, which slides 45cm rearward for easy loading of large objects. Also standard on the SX is a reversible load floor. Handy if you have a dirty snatch strap to throw in after venturing off road. If technology is your thing, you won't be disappointed with the Nitro. Standard fare on the SX Nitro is a 6-disc AM/FM/ CD/MP3/DVD stereo with six speakers. 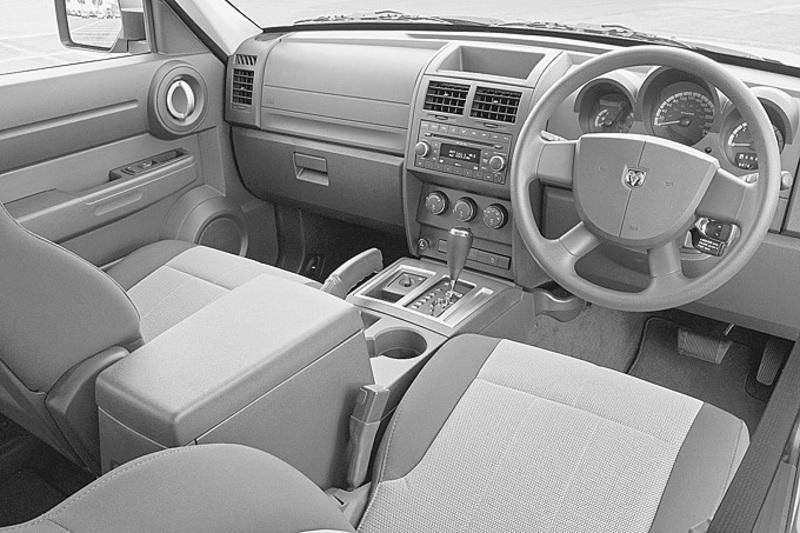 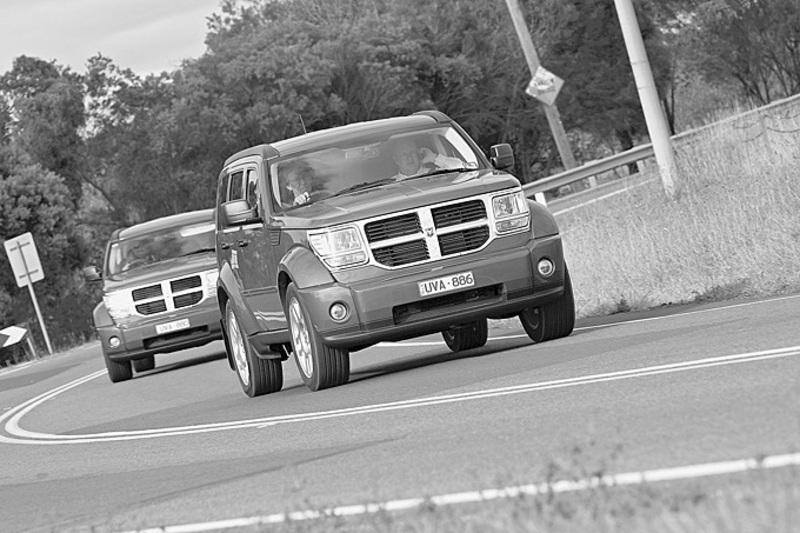 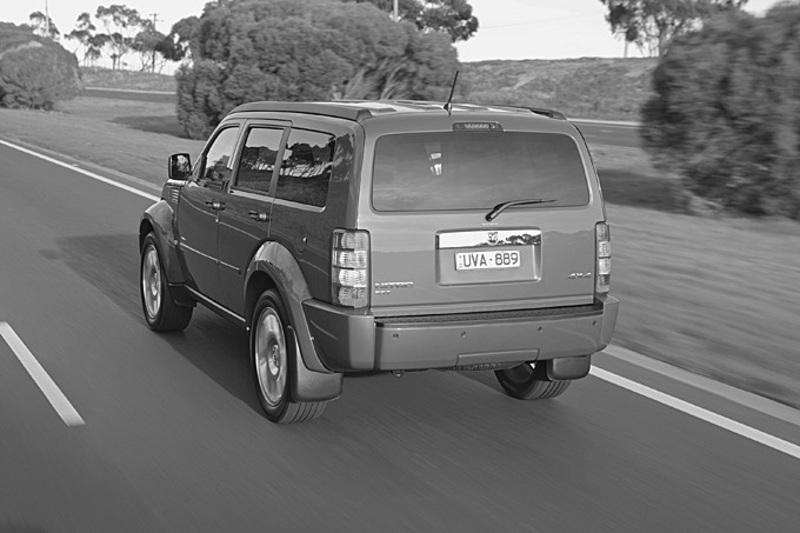 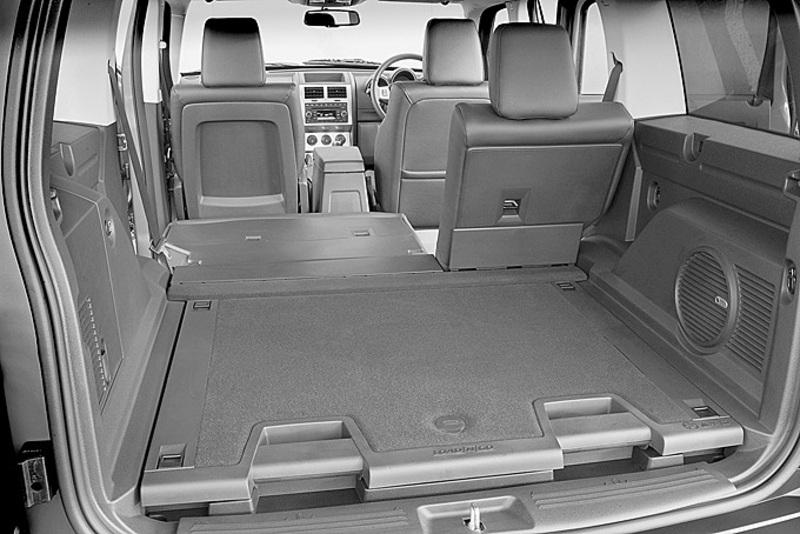