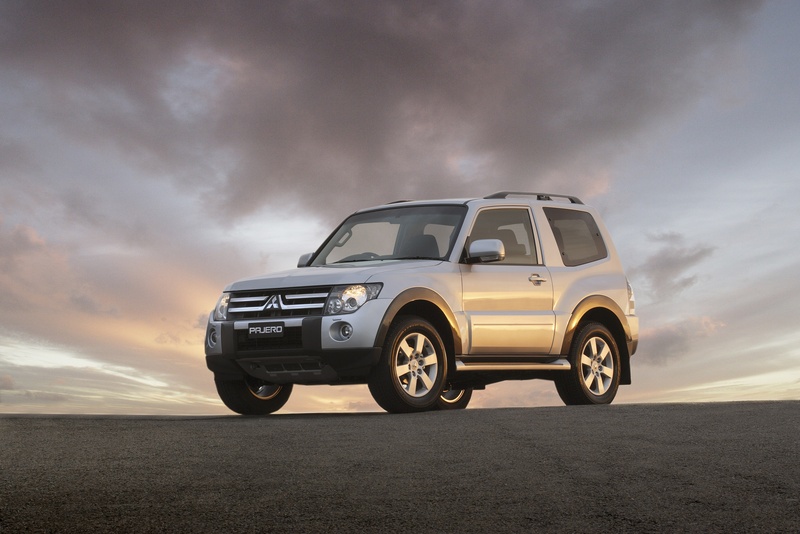 The Pajero introduced levels of comfort and ride quality not previously seen in a mainstream four-wheel drive
Launched here in 1983 the Mitsubishi Pajero was one of the catalysts driving the popularity of family four-wheel drive wagons.

The Pajero introduced levels of comfort and ride quality not previously seen in a mainstream four-wheel drive.
The third generation Pajero introduced in 2000 saw the Japanese manufacturer switch to monocoque construction, making the vehicle lighter and more refined on-road, without scarifying any of its off-road capability. In 2006 this model was upgraded with revised bodies and interior components, two new engines and improved equipment levels. Over eighty percent of panels were new, and aluminium was used for the bonnet.
The NS Pajero, while not a new model received a complete makeover and saw the re-introduction of a SWB three-door variant - the first since 1999.
The Pajero gained a revitalised look, with a new front end accentuated by stylish headlamps, grille and front bumper designs. At the rear the wheel carrier was centrally located, and mounted in a lower position to provide greater visibility through the rear windscreen.
Engines
Two new engines provided increases in power and torque, while being more efficient and economical. Both were Euro 4 compatible.
The 3.8-litre 24-valve V6 MIVEC (Mitsubishi's variable valve timing) petrol engine produced maximum power of 184kW at 6,000 rpm (a 23.5% increase on the previous engine), and maximum torque of 329Nm at a low 2,750 rpm (up 6% from 310Nm at 3250 rpm on the NP Pajero). It was an extremely driveable and flexible engine that is Euro 4 compliant and LPG compatible.
The new diesel engine that replaced the previous 3.2-litre Direct Injection Diesel was a common rail version of the 3.2-litre diesel that was first seen in Australia in ML Triton when it was launched in July 2006. It was quieter and delivered improved efficiency over the previous Di-D engine.
This 3.2-litre CDi DOHC 16-valve common rail inter-cooled turbo diesel engine produces 125kW of power at 3800 rpm, and impressive torque of 358Nm at a 2000 rpm.
Both engines could be mated to either a 5-speed fully synchronised manual transmission, or Mitsubishi's 5-speed INVECS II 'Smart Logic' automatic transmission with 'Sports Mode' sequential shifting function.
Drive was put to the ground through Mitsubishi's 'Super Select II' drive-train that incorporated ABS with Electronic Brakeforce Distribution and Engine Brake Assist Control, Stability Control, Traction Control, Hill Hold Assist (on automatic models) and a rear diff Lock was available for safely negotiating low traction surfaces.
Pajero's 4WD system could be engaged, and dis-engaged, on the move at speeds up to 100km/h, and included 2WD high range, 4WD high range, 4WD low range, and 4WD high and 4WD low ranges with locked transfer.

Wheels and tyres were upsized from 16" or 17" (depending on model) to 17" or 18" (depending on model), as were the brakes. NS Pajero 5-door brakes were 333mm ventilated discs with four-pot callipers at the front, while the rear brakes were 333mm ventilated discs in drum with one-pot calipers.
The 3-door variants received 290mm ventilated discs with two-pot calipers at the front and 305mm ventilated disc in drum rear brakes with one-pot calipers.
Suspension for all variants was Mitsubishi's familiar double wishbone with coil springs at the front, while the rear was multi-link with coil springs. A stabiliser bar was fitted at both the front and rear, and were attached to the sub-frame to isolate bumps and vibrations.
Pajero's power assisted rack and pinion steering combined with the suspension to give neutral, responsive handling and good traction at all times, with a turning circle of 11.4 metres for the 5-door models and 10.6 metres for the 3-door variants.
Inside story
NS Pajero was completely re-designed inside, with a new instrument panel, blue interior illumination, and new finish for steering wheel controls and shift levers.
It was a seven-seater with a 2-3-2 layout. It offered heated seat warmers standard on the VRX and Exceed models, and a 8-way power driver's seat was now standard on VRX as well as Exceed.
The second row was a 60:40 split and tumble arrangement that folds flat with the floor. The rear squabs are tilt adjustable and the headrests are height adjustable in all three positions. Pajero's third row seat carried two occupants and had fold, drop and recline functions. It could stow under the cargo floor, or could be removed from the vehicle altogether.
All the expected features - power steering, power windows, power exterior mirrors, cruise control, remote keyless entry with encrypted immobilisation and multiple storage compartments and cup holders - were found in the NS Pajero. All models also featured a multi mode display - including trip computer, weather information, and compass.
A number of other creature comforts were added to NS that set it apart from its competitors. For example, automatic air conditioning was standard across the range, and rear air conditioning was available on VRX, and standard on Exceed. There was a new entertainment system, with 650-watt amplifier and twelve speaker (including sub-woofer) DSP system.
Steering wheel audio controls were standard on the R and X models of the 3-door, and the VRX and Exceed models on the 5-door.
An electronic tilt/slide power sunroof option was reintroduced on NS Pajero and was available on R and X (3-door), VRX (5-door) and Exceed (5-door) models.
Safety features came as a $1,000 premium for side and curtain airbags on all models except Exceed. Other options were a tilt and slide sunroof ($2,000), family pack that added side and curtain airbags, rear seat entertainment, rear air conditioning and rear park assist ($3,000), while a rear diff lock was $500.
NS Pajero was available in three or five door configuration with choice of R, X (three door models), and GLX, VRX and Exceed (five-door models) trim levels. All models were available with choice of 3.8-litre petrol V6 or 3.2-litre turbo-diesel engine with five-speed manual or auto transmission. The Pajero was available in nine colours. 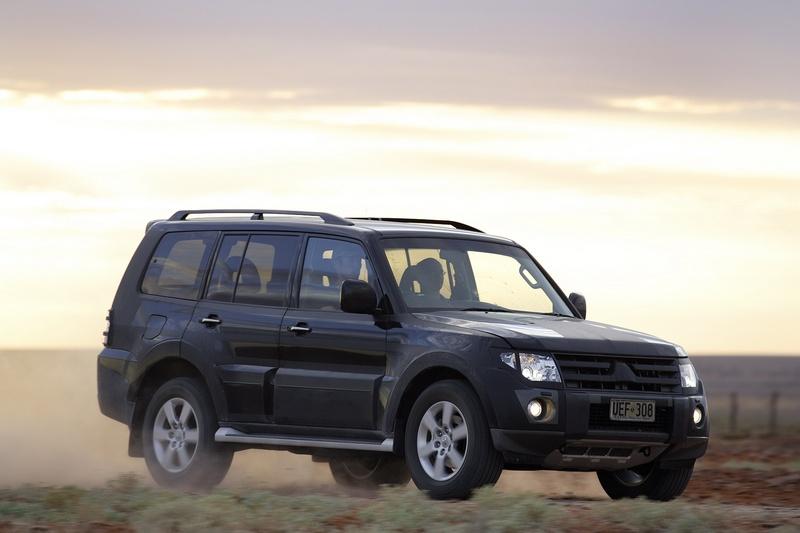 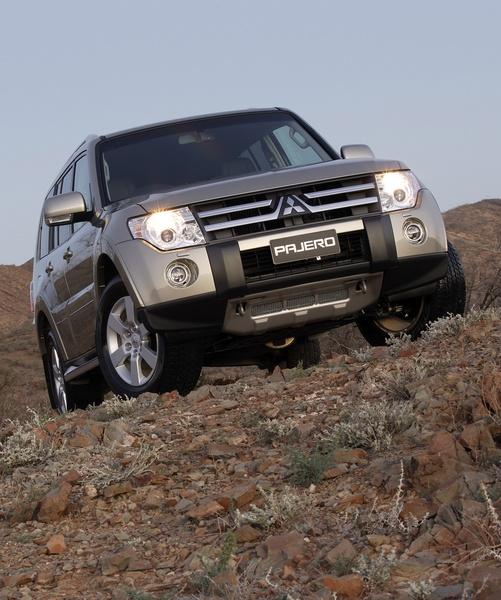 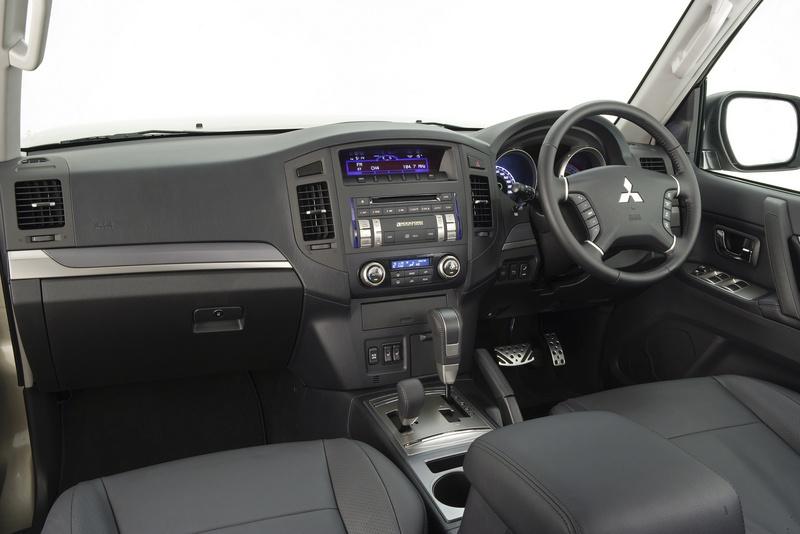 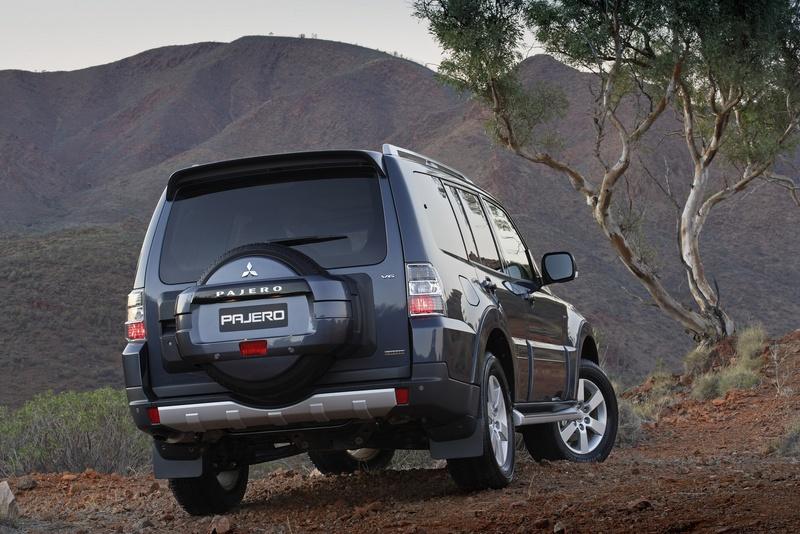 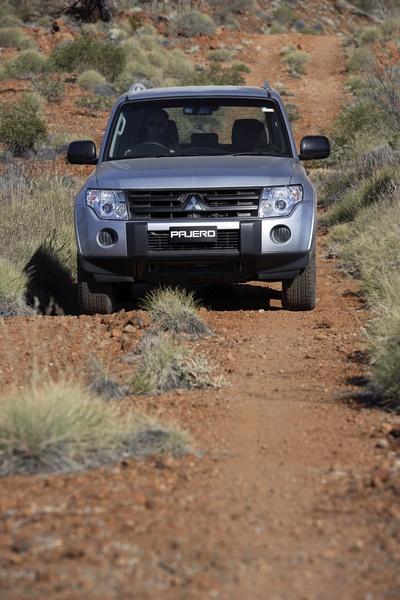 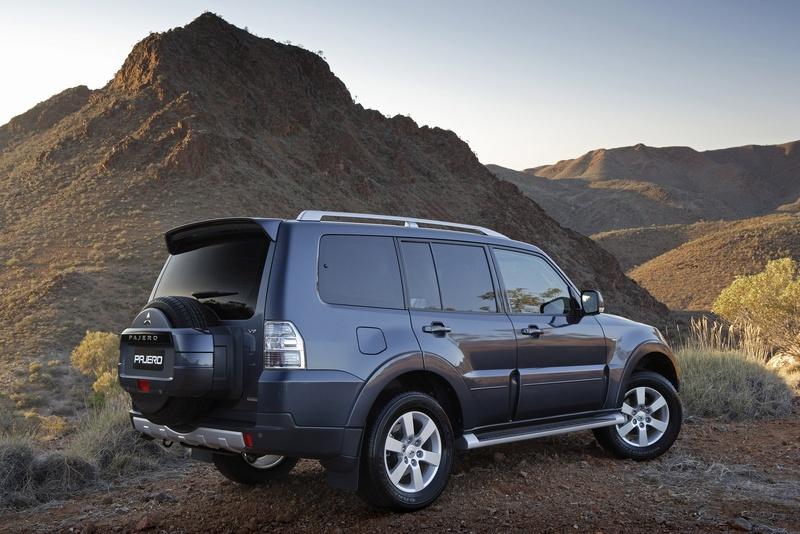 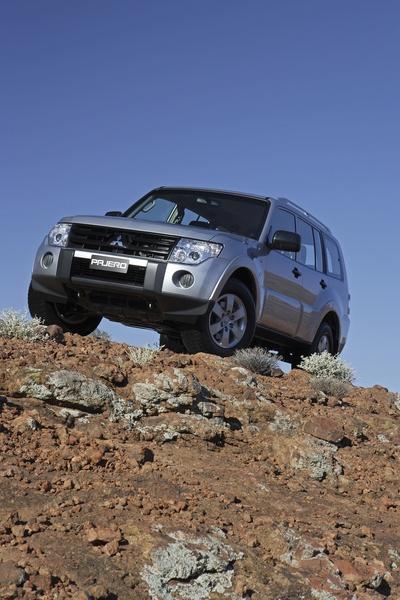 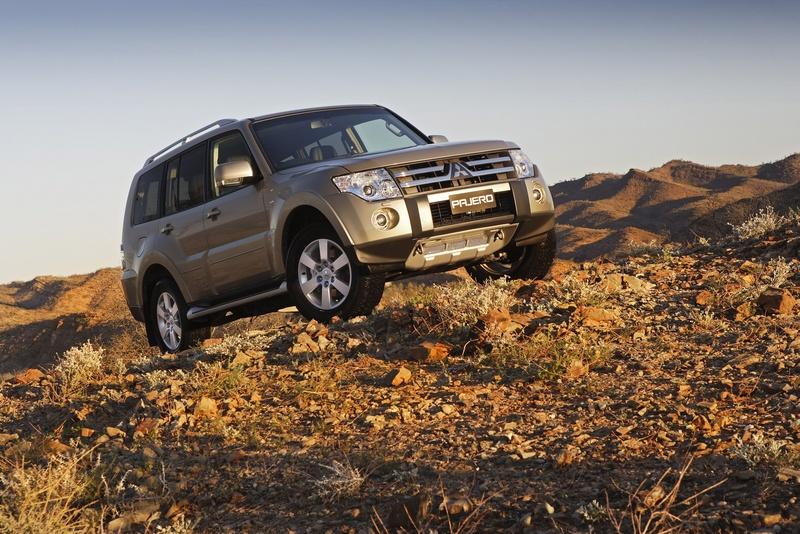