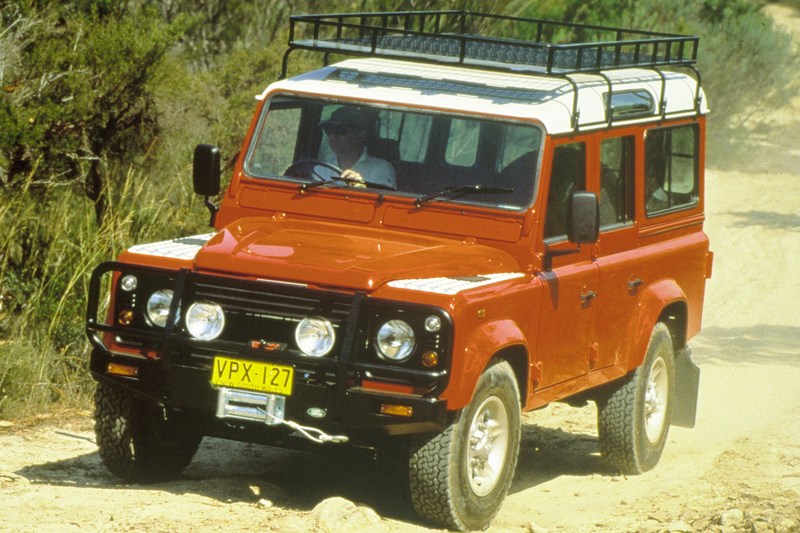 The 1999 Defender saw the introduction of the new five-cylinder TD5 turbo-diesel engine and a package of electronic traction aids
Celebrating the launch of the 1999 Defender, Land Rover Australia launched a special version it called the Xtreme. The special launch edition was designed for extreme off road conditions and came fitted with wide alloy wheels, all-terrain tyres and a bullbar.

The 1999 Defender saw the introduction of the new five-cylinder TD5 turbo-diesel engine and a package of electronic traction aids.

First introduced in the Land Rover Discovery, the 1999 Defender gained this fuel efficient engine which delivered 90kW of power at 4200rpm and 300Nm of torque at 1950rpm. Also available was a Tdi engine that offered 83kW of power and 265Nm of torque.

The cylinder block on the five-cylinder in-line 2.5-litre direct injection intercooled turbo diesel engine was constructed of cast iron, while the cylinder head, carrying the single overhead camshaft, was made of aluminium alloy.

The lightweight but strong design was developed to minimise stresses and reduce the level of noise, vibration and harshness transmitted to the rest of the vehicle.

The new diesel engine incorporated electronic fuel injection. By combining the pump and the injector unit with high pressure injection, extremely accurate delivery of fuel to each of the five cylinders was achieved, so that the precise amount of fuel needed was pressurised only at the time it was required. This maximised performance and fuel economy and eliminated the need for a catalyst. The diesel engine was fitted with two oil filters - a conventional cartridge filter and a centrifugal type, increasing the interval for engine oil change from 10,000km to 20,000km.

In parallel with the new diesel engine was a substantial upgrade of the R380 five-speed manual gearbox. Designed to improve robustness and accommodate the greater torque of the Td5 engine, the modification included increased bush sizes, new material specifications, a quieter gear train, and a cable selector mechanism for the new LT230Q low range gearbox.

The R380 gearbox had up-rated synchromesh on all gears, including reverse, resulting in a lighter and smoother gear changes.

The transfer box (with permanent four-wheel drive) was a two-speed, ratio-reducing gearbox, which incorporated high and low range outputs with a mechanically lockable centre differential.

Powertrain improvements included the introduction of a number of new technologies to the Defender. These included:

The immensely strong chassis of Defender is probably the most important single component of the entire vehicle. It contributed to the vehicle's strength, versatility, durability and exceptional performance both on and off road.

Defender is built around the framework of a strong, rigid and separate chassis. Chassis members were made up of 2mm 'U' section sub-assemblies, which were welded top and bottom to form box section units. Two longitudinal members are joined by cross members and the heavy front bumper to form a 'ladder' configuration with six cross members on the 110.

On 110 Wagons, extra strength and safety was provided by an additional cross member bolted on top of the longitudinal members to the rear of the fourth cross member.

The ladder frame design of Defender resisted the twisting and bending stresses encountered during four-wheel driving. Because Defender's body is constructed of various panels bolted, riveted or welded into sub assemblies, a wide range of body styles could be produced and adapted later if necessary.

Except for the bulkhead and the A, B and C pillar assemblies on the Wagon, all the outer body panels were formed of aluminium to reduce weight and prevent corrosion. Doors were made of aluminium panels on steel frames.

The Defender's suspension provided a strong compromise between on road ride comfort and off road ability by providing optimum traction by ensuring wheel to ground contact at all times.

Defender was equipped with front and rear beam axles of pressed and welded steel construction to give great rigidity and allow optimum alignment of crown wheel and pinion. Ground clearance was therefore maintained below the axle even over rough ground.

The Land Rover Defender is a workhorse designed to offer pure function. It delivered outstanding off-road performance, with good approach and departure angles achieved by mounting axles as close as possible to the extremities of the chassis. The Defender has a low centre of gravity and the strong steel chassis is capable of withstanding extreme terrain.