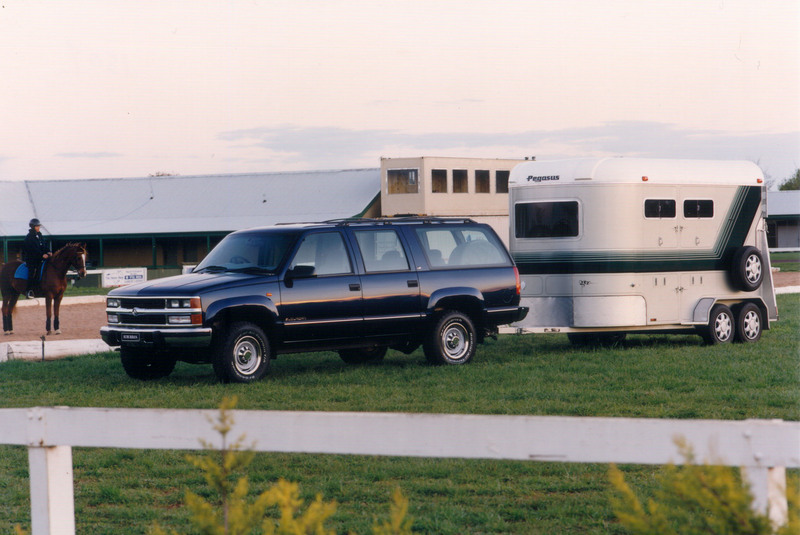 Big is beautiful, and the Suburban - despite a few rough edges - was king of the road. Badged in the States as the Chevrolet Suburban and imported by GM Holden, it was marketed as the 'largest 4WD on the planet'. It made the traditional heavyweights of the Australian 4x4 market - the LandCruiser and Nissan Patrol look decidedly puny!

The Suburban was built to fulfil a specific role, and Holden hoped to create a new 'big' 4x4 wagon market segment. Its major strengths being its massive and I mean massive interior space, and the power delivered by choice of 5.7-litre V8 petrol, or 6.2-litre V8 turbo diesel engine. The Suburban had a towing capacity about 50 percent more than either the LandCruiser or Patrol, and more so, could pull such weights with total ease.

Models
The Suburban was available with V8 petrol or V8 turbo-diesel power, four-speed automatic transmission, 'on demand' four-wheel drive and came in three trim levels.
Six models were available at launch, three each in the V8 petrol 1500 Series and the V8 turbo diesel 2500 Series. The three models - Suburban, Suburban LS and Suburban LT - in each Series, were distinguished primarily by trim level.

The 1500 range was a heavy-duty model and the 2500 with its diesel engine rated as 'super heavy duty' with heavier componentry throughout. The models offered in Australia were factory built right-hand drive, and rode on a suspension that Holden said was modified for Australian conditions using Bilstein gas shock absorbers, and BF Goodrich All-Terrain tyres on all models for the best mix of off road traction and ride comfort.

The dashboard and controls were all developed for right-hand drive, but a few shortcuts were taken, with the column gearshift left to the right of the steering column, and hinges on the centre console left on the right hand side, making it difficult for the driver to access. Finally, access to the third row of seats was a real oversight. Access being only from the right side - which in Australia - obviously means on the road side!

Inside story
First up, there was plenty of room! The seats - including the third row - were some of the best around, with the driver and front passengers finished in plush leather, with four way adjust including tilt and lumbar support. Second row passengers were equally well looked after, with a wide opening door providing plenty of room to enter/exit the wide and comfortable seats. A centre console was a nice touch. It folded forward to provide an armrest and two of numerous cup holders found in the Suburban.

Front seats are high backed, but did not fully recline. The second row had a 60/40 split folding seat, which neatly folded flush behind the front seats. The third row seats were possibly the best of any third row seats available in any 4x4 wagon at the time.

The automatic transmission selector was column mounted on the right-hand side of the steering wheel, which took some time to get used to. However more challenging was the conglomeration of controls found on the left-hand stalk. This stalk controlled turn indicators, wipers, wash, cruise control and high/low lights!

The Suburban was designed for heavy work, and accordingly had the power to do the job. The petrol engine was matched to a heavy duty drivetrain, whereas the diesel engine Suburban 2500 models featured super heavy duty transmission and axles, a wider wheel track, heavy duty braking system, 8-stud steel wheels and a heavy duty suspension. The Chevrolet Vortec 5.7-litre V8 petrol engine had a power output of 190kW @ 4600 rpm and torque of 447Nm @ 2800 rpm. Despite its size it was a smooth engine that delivered power effortlessly. The engine is also compatible for LP gas conversion.

Four-wheel drive was push button engaged. The vehicle however, needed to be stationary for shifts between high and low range.

Off road capability
Four-wheel drive touring in a Suburban was a challenge - be it only for its size. With the available torque there are few hills where grunt is a problem, and with power steering, negotiating tracks is no problem.

Moving from 2WD to 4WD high range could be done seamlessly at speed, with the transfer/transmission silky smooth and but for a 4WD symbol that lit up on the dash, you wouldn't notice the change in drive.

If four-wheel driving was a priority for your Suburban, a lift kit or higher profile tyres would be a worthy investment. Low range was a delight and whether in high/low range the application of power was rewarded with instant traction. The wide track gave the Suburban a feeling of stability, and coupled with luxury ride and powerful engine, presented few off road dramas. Narrow or overgrown tracks however would bring the Suburban to a stop.

Conclusion
Ultimately the Suburban had a short life in Australia. If the requirement for interior space, or towing were at the top of your priorities a Suburban would fit the bill.

The engines delivered plenty of grunt, and with a 159-litre fuel tank a range of around 1,000kms was possible from the petrol V8.

The problem with the Suburban, was that its biggest asset - its size, was also its biggest shortcoming! While a pleasure to drive on long highway or dirt road stints, this in turn was to reveal a number of built quality issues with the truck.