The Toyota Prado was launched in Australia mid-1996 to replace the aging 4Runner. While the Landcruiser Prado had existed in the Japanese market for many years, as a long wheelbase military style vehicle with solid front axles and rear it was never considered to be suitable for the local recreational 4WD market.

The new Prado was another kettle of fish! Within six months it had virtually redefined the mid-range 4WD market. The most popular mid-sized 4x4 wagons of 1996 were the Jeep Cherokee and the Pajero, which both capitalised on the fact that there was no mid-range vehicle available from Toyota that slotted below the 80 Series Landcruiser. The Prado arrived in July 1996 and all that changed. By years end Prado was the no 2 best selling 4WD wagon, only headed by its bigger stablemate the 80 Series Landcruiser.

Overview
The Prado was a medium duty 4WD station wagon with seating for up to eight, high levels of interior equipment and refined mechanicals. All Prado models were equipped with full time 4WD, power-assisted rack and pinion steering, double wishbone coil-sprung front suspension, multi-link coils at the rear and four-wheel ventilated disc brakes. Advanced ABS brakes were available on some models.

Possibly its biggest drawback was its pedestrian styling, which closely resembled the Pajero!
It was offered with a choice of two engines: a 3.4-litre quad cam V6 and a 2.7-litre twin cam four.

Models
The Prado was an affordable 4WD, offered in seven models with a choice of two EFI-equipped multi-valve engines, three transmissions and four equipment levels.

The two engines were both new; a high tech twin cam 2.7-litre four-cylinder plus a gutsy quad cam 3.4-litre V6. Transmissions were a five-speed overdrive manual, and an electronically controlled four-speed overdrive automatic with fuel-saving lock-up clutch and second gear low traction start function. Both transmissions were matched to a two-speed transfer and full-time four-wheel drive.

Additionally Prado RV6 provided the standard equipment of he V6 engine plus a third-row fold away seat, extra 69-litre supplementary fuel tank and side steps, plus the options of he combination dual airbags, ABS and air conditioning.

Prado safety
Toyota claimed a number of safety firsts for Prado. Its full chassis is designed to absorb collision impacts, with energy absorbing crumple zones in the body and chassis to absorb crash energy. It was designed to meet predicted future safety regulations, including deformable 40 percent offset front barrier, roll-over and dynamic side intrusion. It was the first Toyota 4WD fitted with mechanically triggered front seat belt pretensioners to actively restrain front seat occupants in the event of a collision. Prado was also the first Toyota 4WD with a dual airbag system available on all models. Three factory approved bullbars were also offered at launch.

Performance
The Prado introduced the first quad cam engine in a Toyota commercial vehicle. The new 3.4-litre 5VZ-FE V6 had 26 percent more power and 21 percent more torque than the superseded 4Runner's 3.0-litre 12-valve SOHC V6. One of the strengths of the engine was its flat torque curve, delivering more than 260Nm of torque from 1600rpm through to 4950rpm.

The 2.7-litre 5VZ-FE engine delivered 132kW of power at 4800rpm and 303Nm of torque at 3600rpm.
The Prado was designed primarily for on-road performance, with the V6 delivering high power and torque output for smooth urban performance. The engines were matched to a choice of three transmissions, with the RV, RV6 and GXL models offered with a choice of five-speed overdrive manual transmission of an electronically-controlled four-speed overdrive auto transmission. The VX was only available with the auto option. All models have a two-speed transfer and a disc-type limited slip rear differential. All manual transmissions have synchromesh on all gears.

The new four-speed auto transmission had a push button selectable power and economy modes, plus a lockup torque converter.

On the road
The Prado is a good compromise town wagon. The engine was responsive, and noise levels were well dampened, while suspension was first rate. The wide track provides a stable ride, with little body roll even when pushed through corners. Front seating was good, while the second row bench seat was fine for children, with the third row consisting of two side hinged seats. Forward visibility is generally good, although high bonnet lines were poor in comparison with competitors.

While designed for on-road drivers, the Prado - even in its first generation - was also a very capable off-road machine. The torque spread was ideal for four-wheel driving, although in common with many other autos, even in Low range the vehicle tended to 'run away' on descents. In practice the Power mode switch produced little discernable difference in the Prado's performance. On corrugated roads the independent suspension soaked up the bumps for a pleasant ride, and off road wheel travel was impressive.

As the first Prado there was little to fault with this four-wheel drive, which has since gone on to prove itself as one of Toyota's most successful models. 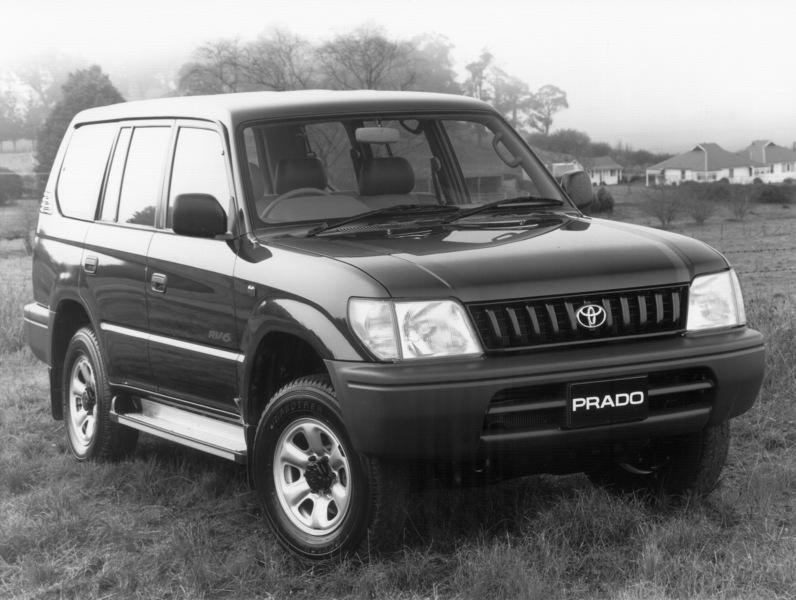